The Napa Valley Wine Train has become a very popular excursion since it began operations in 1989.

The train itself is operated by the Napa Valley Railroad, which is a reborn railroad that dates as far back as 1864 and connected Calistoga and Crockett, California, just under 48 miles in length.

The purpose of the original railroad, just like the operation today, was to bring in tourists to the beautiful Napa Valley region (in this case to Calistoga, a resort city).

Today, if you are vacationing or traveling through the famous vineyards of the Napa Valley you may want to consider stopping by and visiting this very posh tourist train, which spares no expense in the meal and the journey to make sure that you have the most enjoyable experience possible! 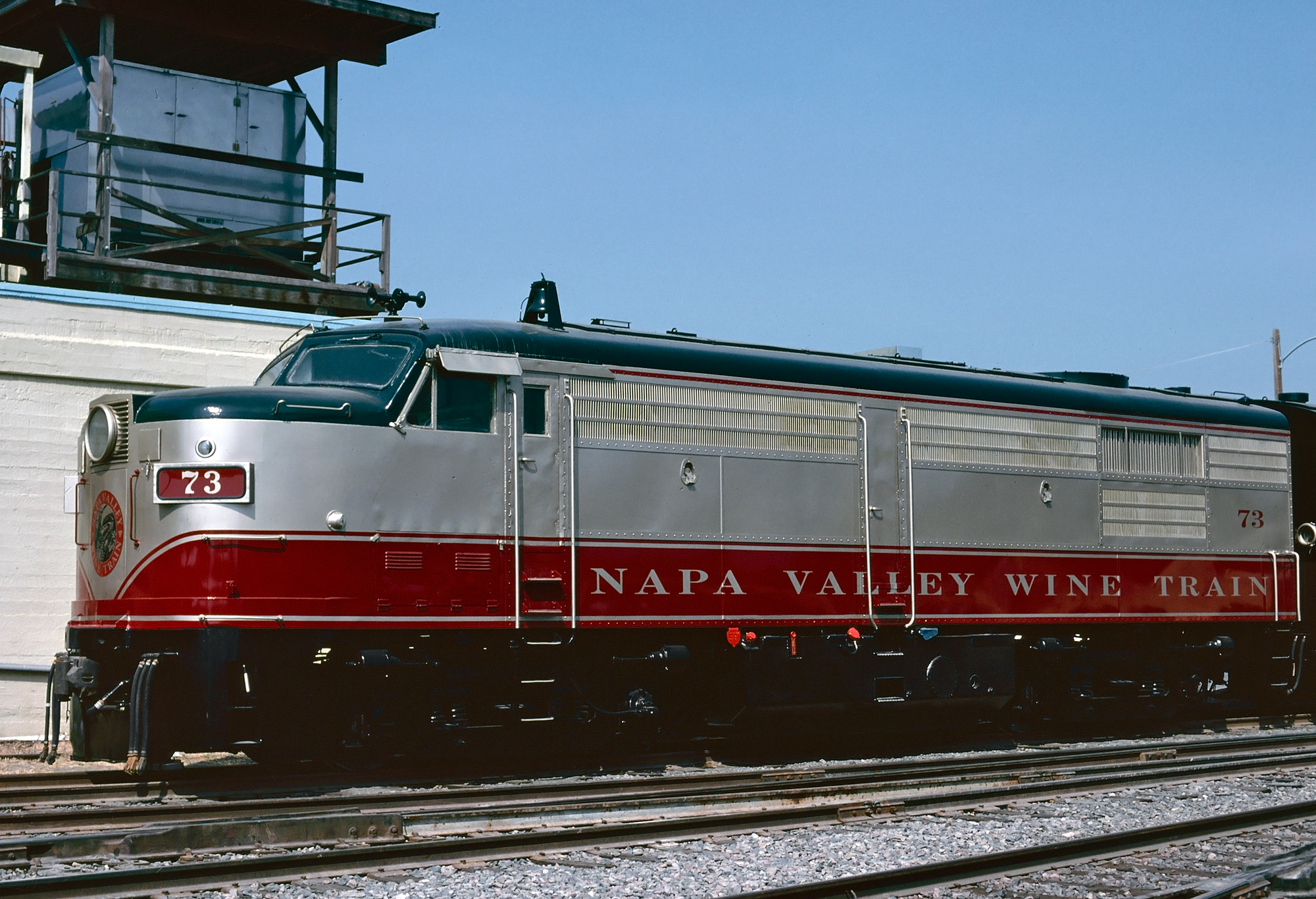 The Napa Valley Wine Train was initially started in 1987 by local preservationists and railroad enthusiasts among stiff opposition from local communities.

After a lengthy court battle the railroad won out and was granted the right to operate the then ex-Southern Pacific trackage between Napa and St. Helena, California.

The Southern Pacific came to own the original Napa Valley Railroad, later named the California Pacific Railroad, in 1889.

While today’s Napa Valley Railroad does see sparse freight service to complement its popular passenger trains, there is talk that the NVRR may soon be hauling much more significant freight traffic making it a full-fledged freight railroad.

The history of the Southern Pacific and its important impact on California is hard to quantify, even though many now living in the state probably have no idea just how important the railroad was to their state.

Today, anyone seeing a freight train in California will notice either the yellow of Union Pacific or green and orange of BNSF Railway.

However, before the mega-mergers that began in the 1960s the SP dominated rail service in the state, both freight and passenger, and served all of its most important cities.

Poor management beginning in the 1970s ultimately was the company's downfall, purchased by Rio Grande Industries in the late 1980s and merged into the Union Pacific in 1996.

The success of the Napa Valley Train can be summed up in two parts:

Naturally, because they have such a close proximity to such a large population area it is much easier for them to draw in large crowds along with being located right in the heart of California's premier wine region.

· #70 – MLW FPA-4: Originally owned by the Canadian National and later VIA Rail.

· #71 – MLW FPA-4: Originally owned by the Canadian National and later VIA Rail.

· #72 – MLW FPA-4: Originally owned by the Canadian National and later VIA Rail.

· #73 – MLW FPA-4: Originally owned by the Canadian National and later VIA Rail.

Today, the Napa Valley Wine Train offers everything from dinners in dome cars and murder mystery specials to wine tours of the local area.

Along with the trains’ former Milwaukee Road dome car it also features diner and lounge cars for the journey.

In total, the railroad's trains are typically nine cars in length and totally restored, featuring a splendid custom livery of green, red, and gold.

All in all, with regal interior designs using mahogany and other fine materials (not to mention a splendid matching paint scheme) a trip aboard the Napa Valley Wine Train is certainly a unique, memorable, and lasting experience not afforded by most other tourist trains.

To learn more about everything the Napa Valley Wine Train has to offer please click here to visit their website (they also have a Facebook fan page if you would like to keep with the latest).

There you can find out when their trains operate, pricing for both standard excursions (lunch and dinner) as well as specials, how to reach the railroad.

Additionally, they provide information about taking local winery tours, and how to take the train for weddings and large group charters.

Finally, be sure to check  out their vacation packages if you want to plan your trip in advance.  If you would like to know more about the Southern Pacific and its fascinating history please click here.