The Baltimore & Ohio’s National Limited was the railroad’s premier train between New York City and St. Louis. In later years the train operated only between Baltimore and St. Louis.  Due to the its lightly populated market it never saw ridership numbers as high as other trains.

Still, the National was maintained by the B&O as one of its flagship runs behind only the Capitol Limited in this regard.  After perennially declining ridership following World War II the railroad finally elected to cancel the train by the mid-1960s.

However, the B&O continued to offer passenger service along its original route until the start of Amtrak in 1971. Today, not only is the National a memory but also much of the route the train plied through West Virginia and southern Ohio, which was abandoned in the mid-1980s.

The National Limited can be traced back to the early ‘teens but the train best remembered today had its beginnings during April of 1925 when the B&O unveiled an all-Pullman heavyweight passenger train between New York City and St. Louis. 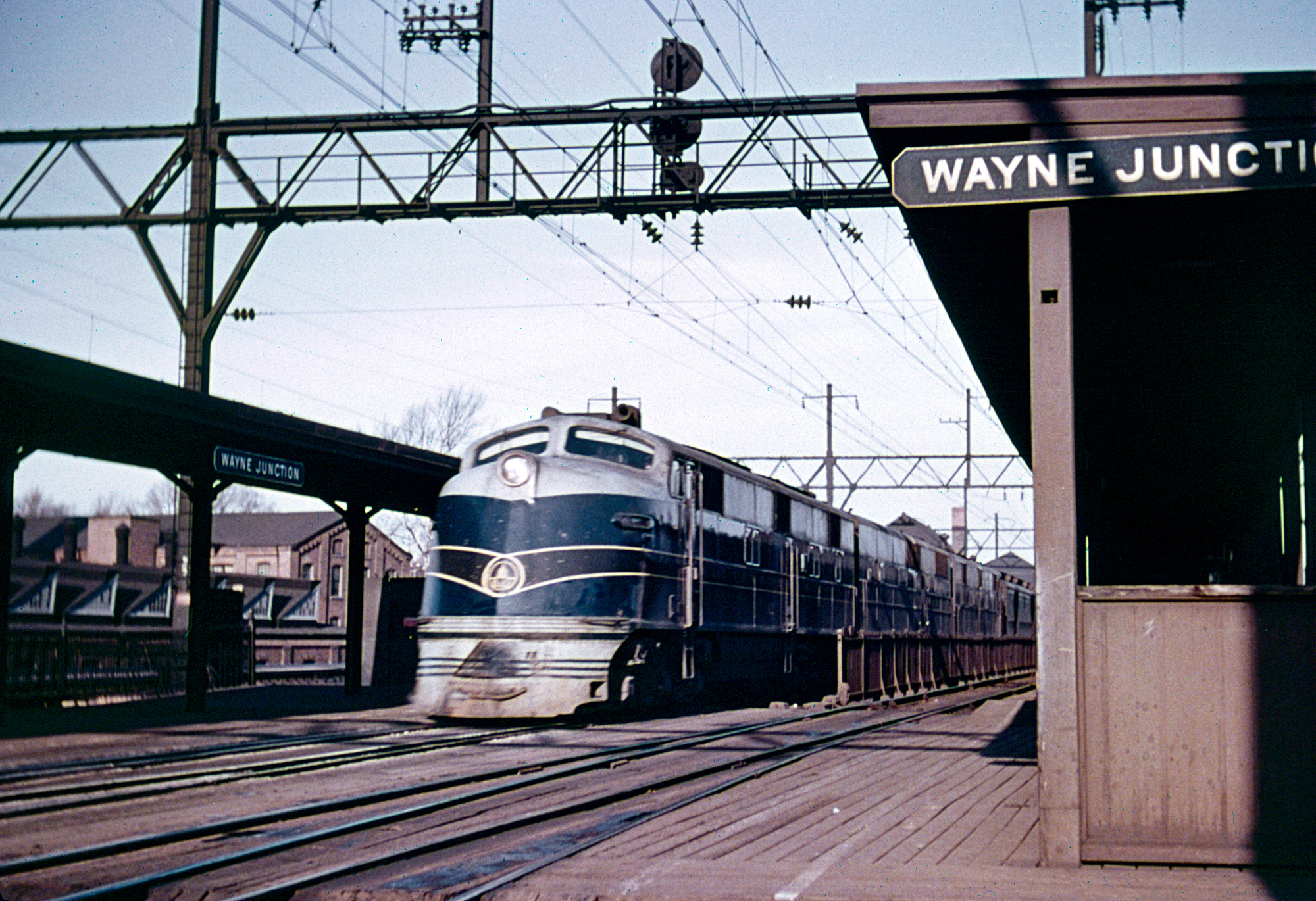 Listed as trains #1 and #2 on the B&O's official timetable,  the original routing left the Jersey Central's Jersey City Terminal, located along the Hudson River waterfront (passengers took ferries into the downtown area and then boarded B&O buses once they reached the Big Apple), traveled down the east coast to Washington, D.C./Baltimore, and then journeyed west through the hills of West Virginia and Ohio.

If one took the train in its entirety you trip would conclude in St. Louis. It was in the late 1930s that the National truly came of age.

During this time the B&O reequipped its most prestigious trains with Electro-Motive's brand new, self-contained streamlined diesel, the EA (along with a matching EB booster engine).

Not only was this locomotive sleek and gorgeous but the ever-resourceful B&O, not satisfied with the light-weight, aluminum cars it had purchased for its first streamliner, the Royal Blue, turned to its Mount Clare Shops for new equipment (a move made by famed company president Daniel Willard). 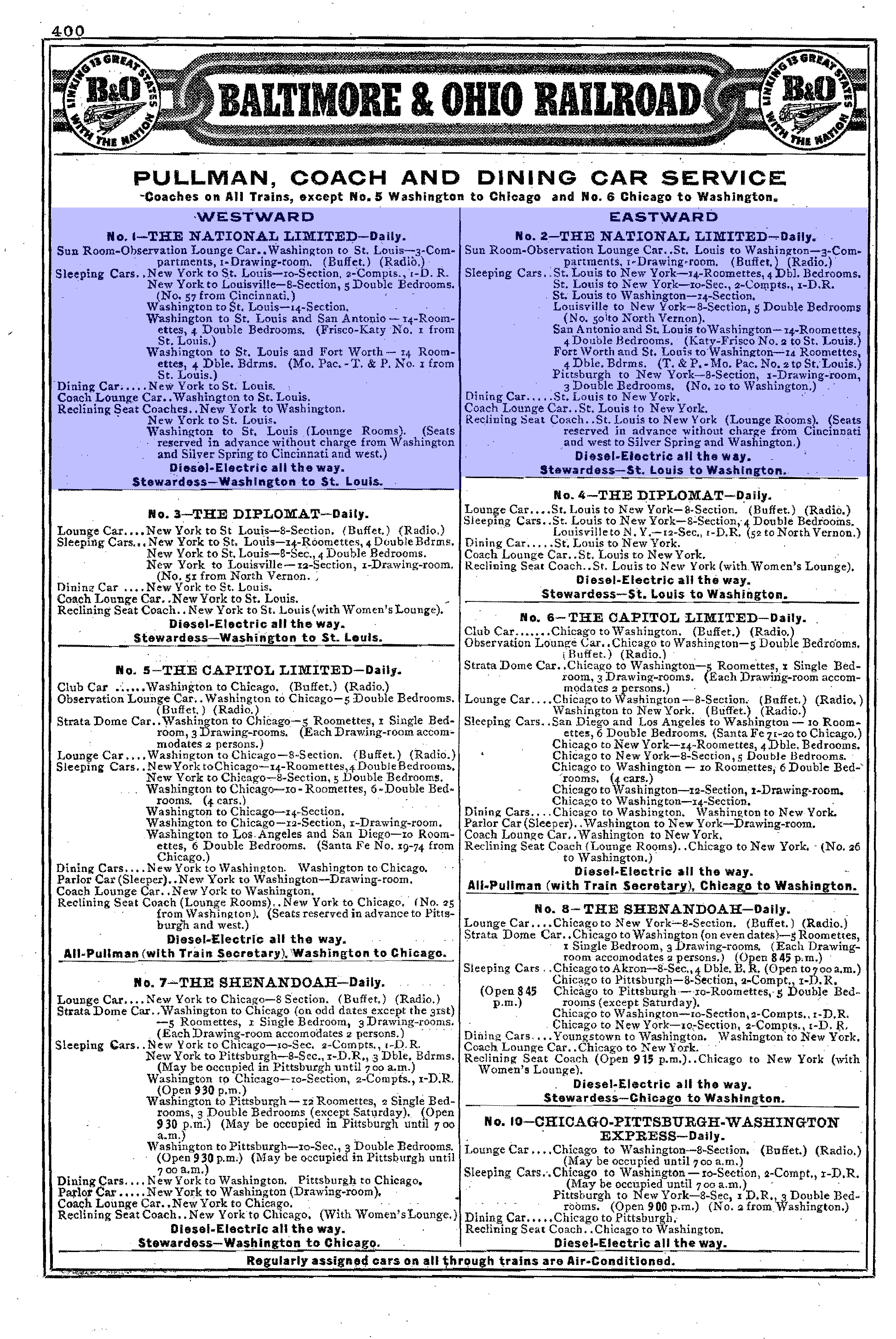 The forces there rebuilt traditional, heavyweight car and gave them streamlining to match the EA/EB sets. What resulted, with the help of renowned industrial designer Otto Kuhler was two stunning trains featuring one of the industry's all-time classic liveries of royal blue, blue/grey, silver, and gold pin-striping.

Along with being entirely air-conditioned the train featured a nine-car consist including; five sleepers, a sun-room/observation-lounge, diner, buffet/coach-lounge, and reclining-seat coach. 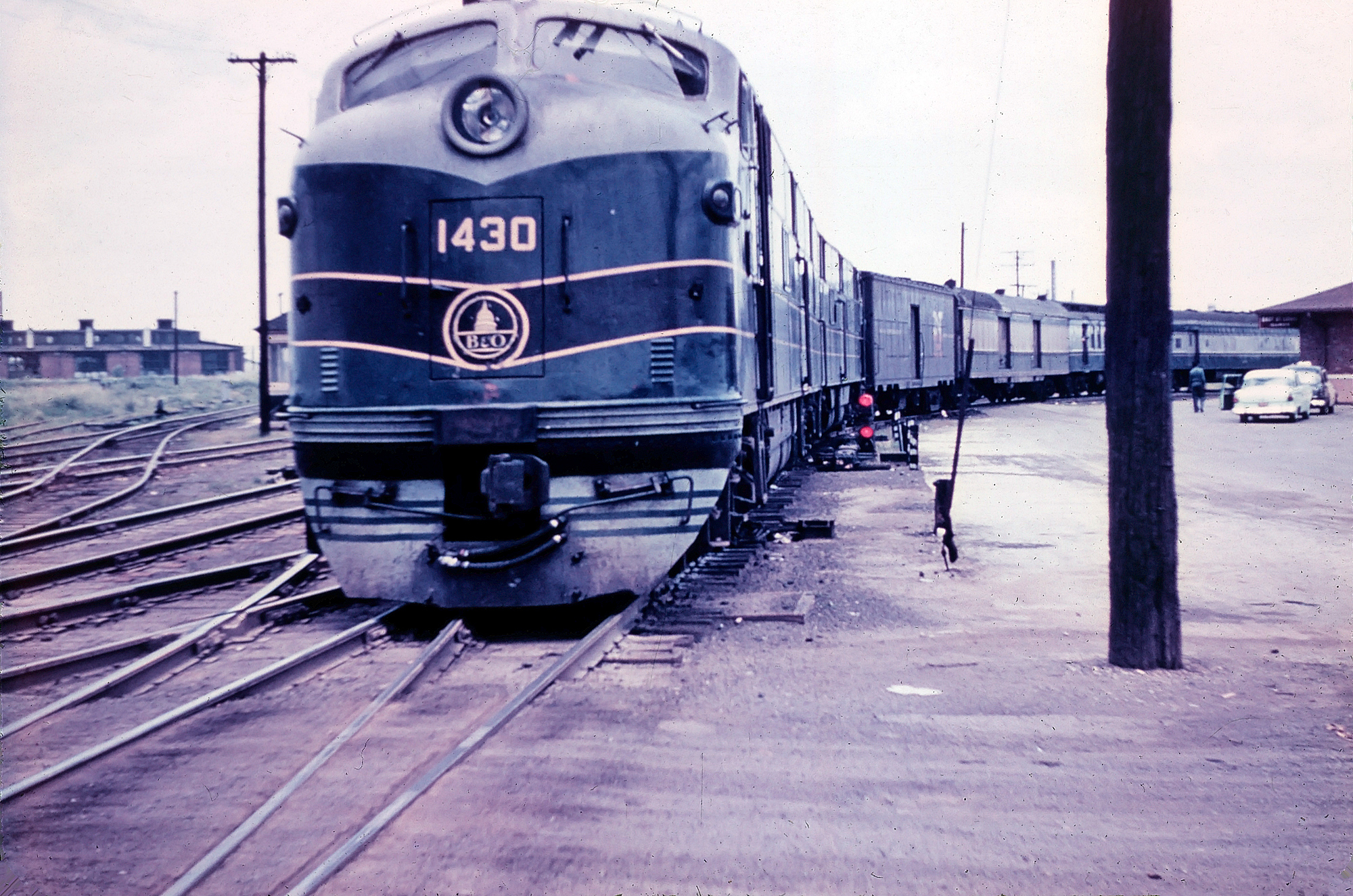 The train would later feature the first dome cars for an eastern railroad, the Strata-Dome.   While the B&O won over the hearts of many with its splendid services and on board offerings (such as those mentioned above) it simply could not compete with the Pennsylvania and New York Central in the New York market. 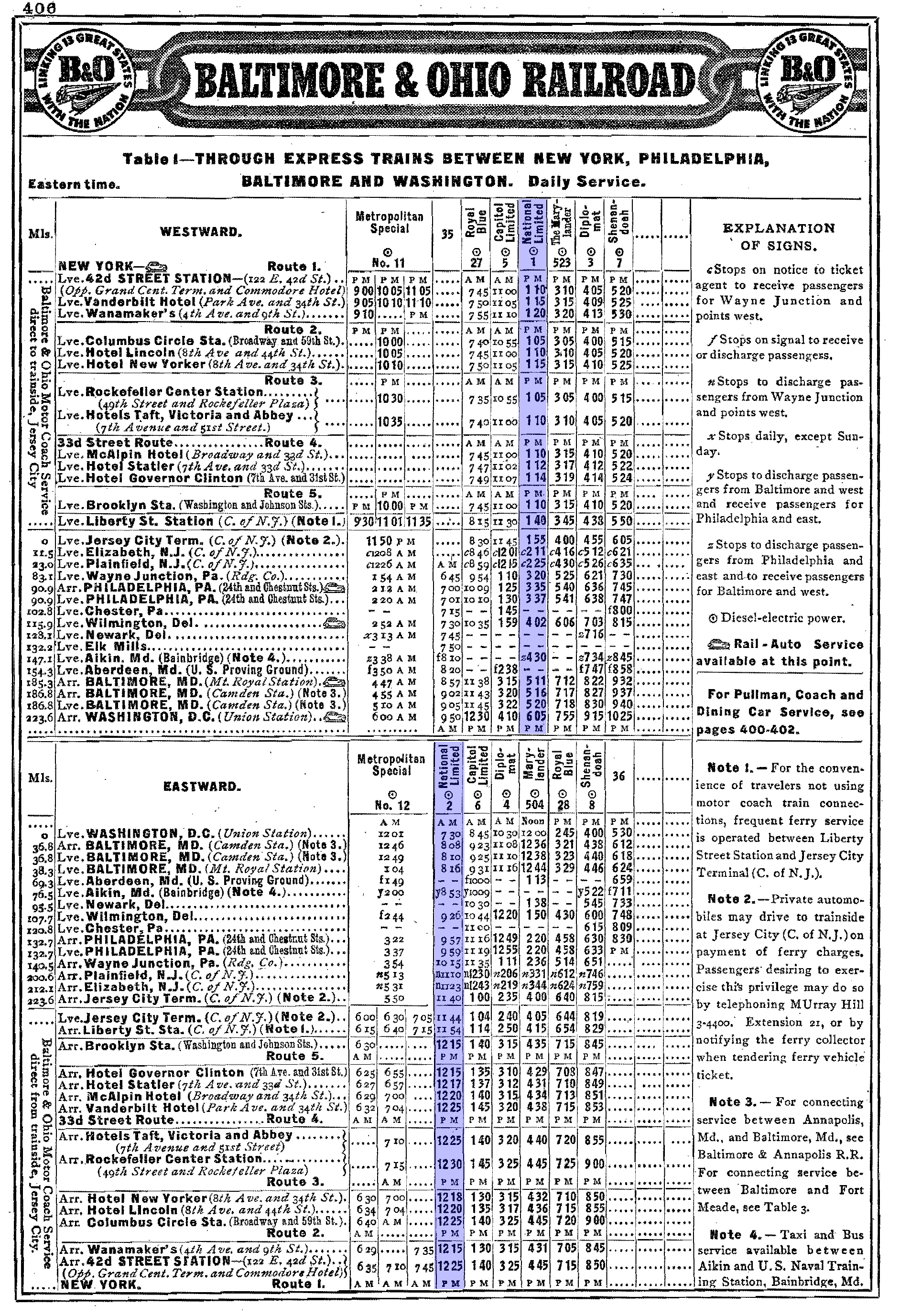 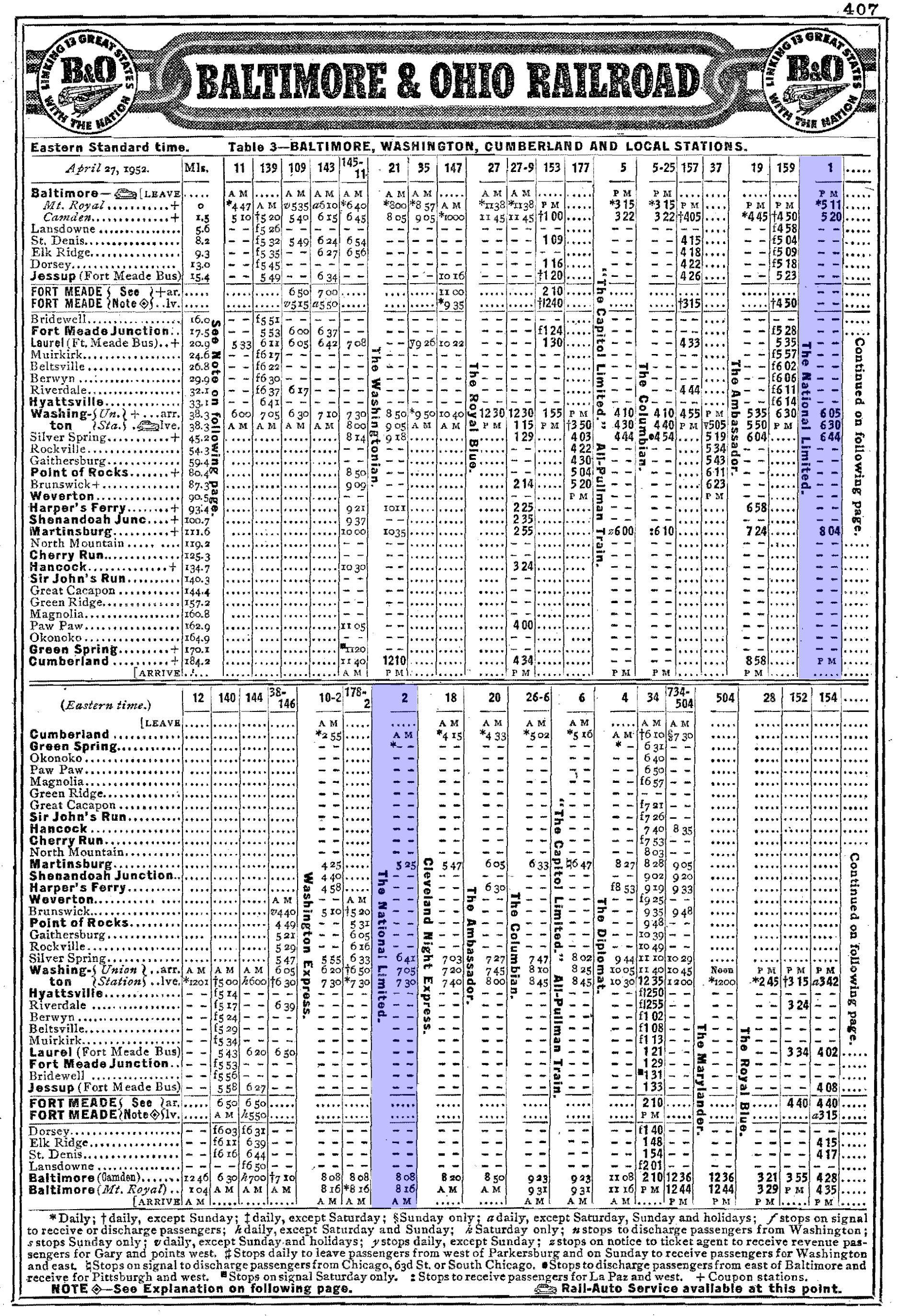 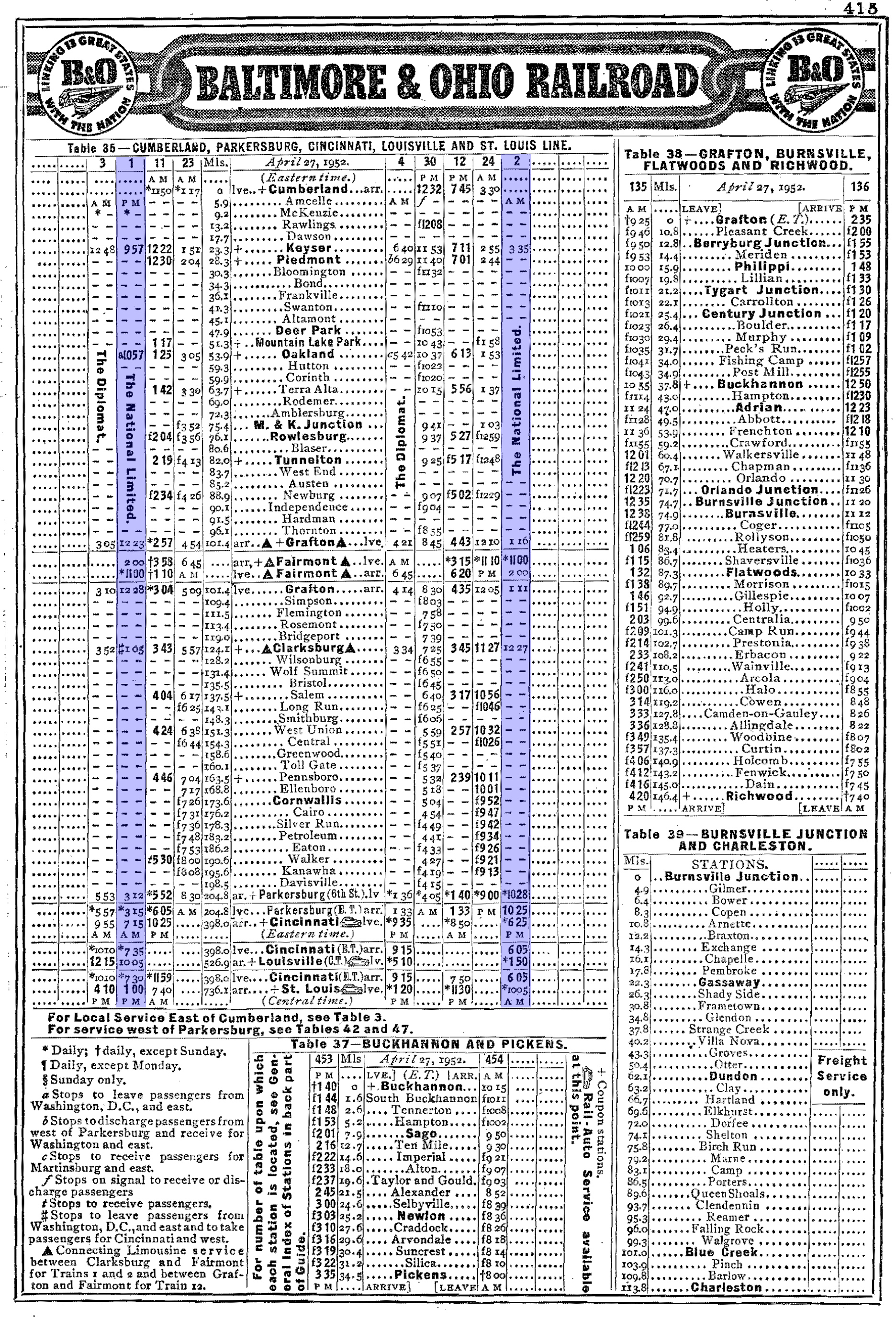 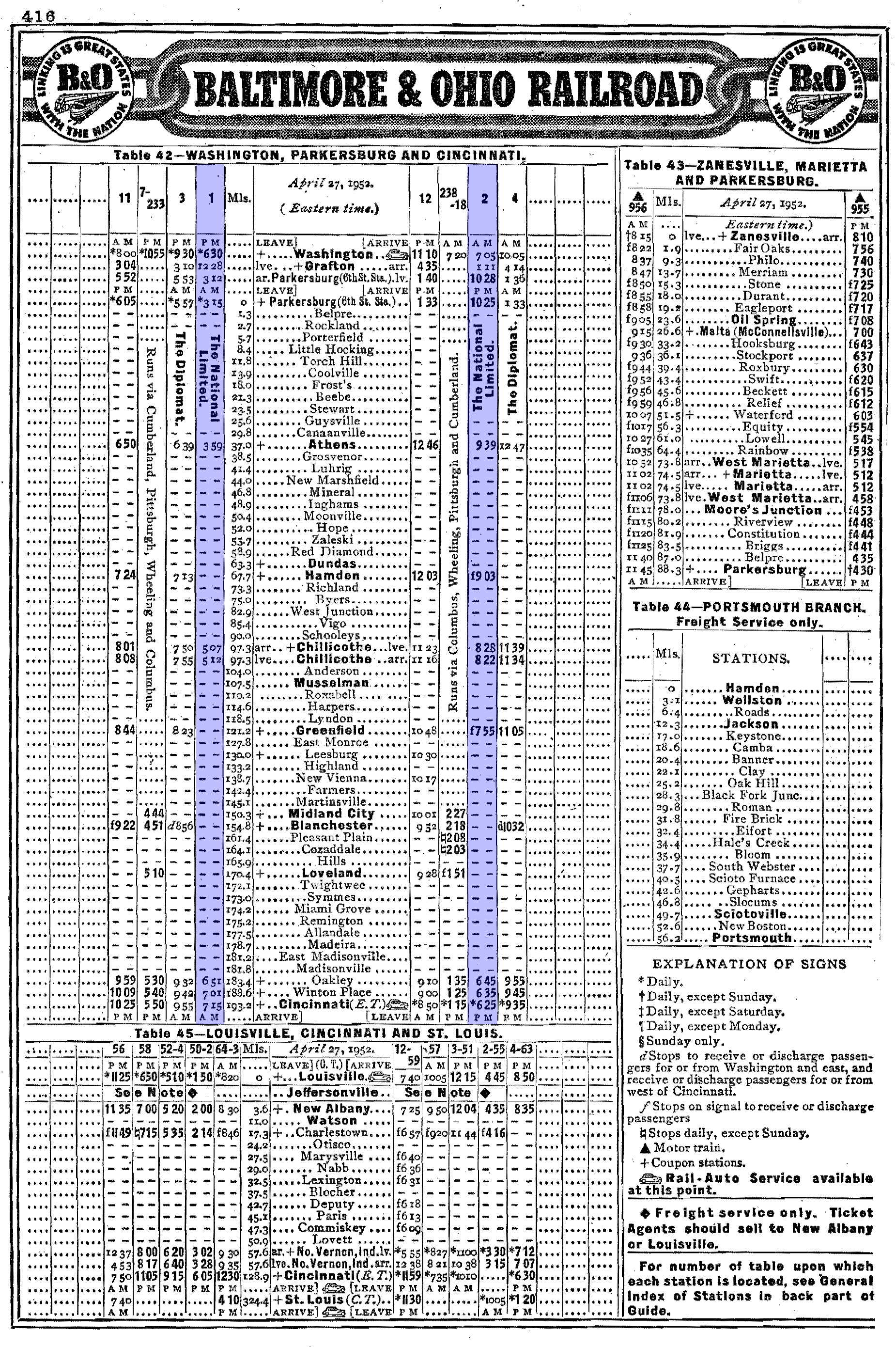 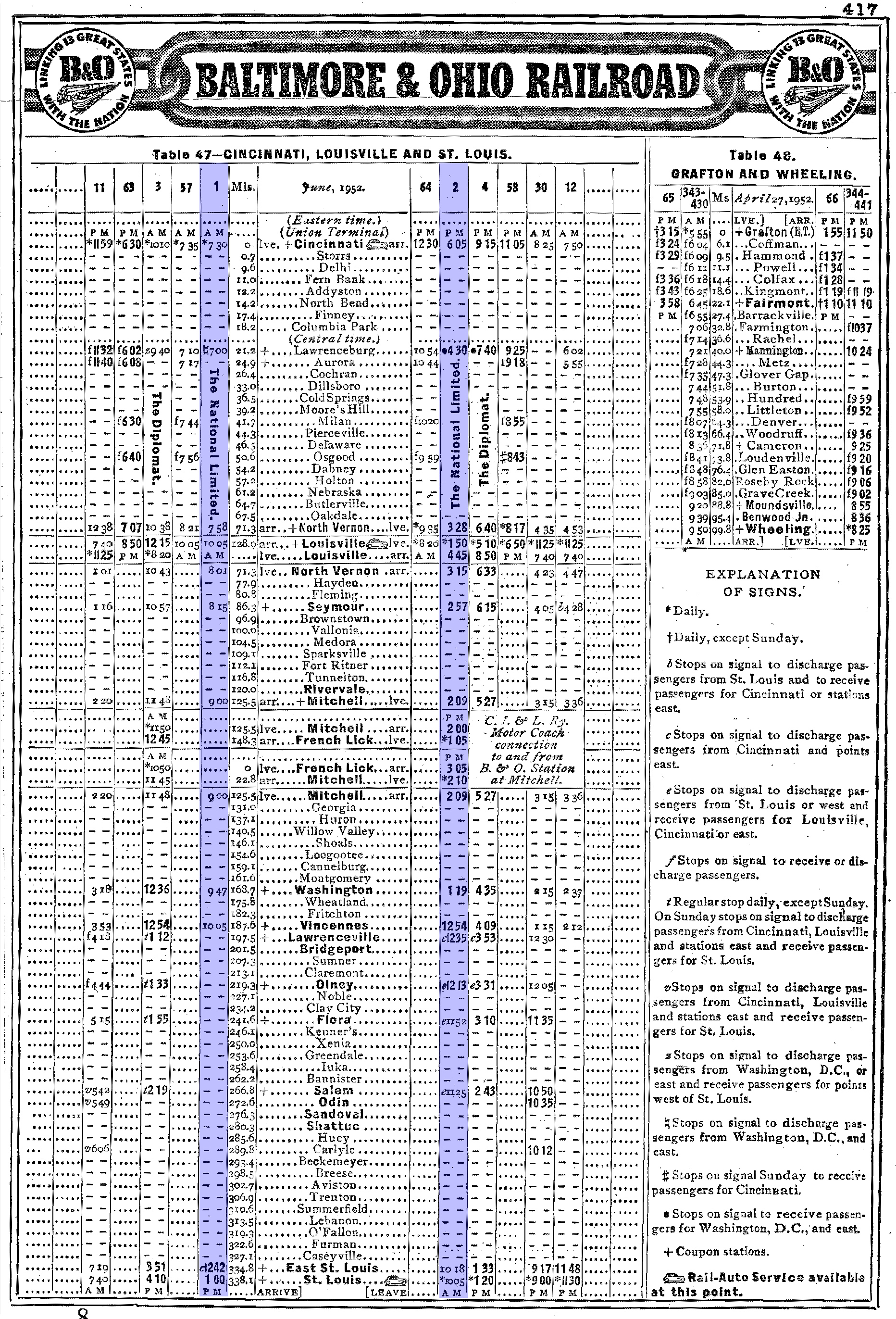 As a result on April 26, 1958 the B&O gave up on NYC, cutting all services back to Baltimore/D.C., which included both the National Limited and Capitol Limited.

As ridership continued to decline through the 1960s the train was hit especially hard since it traveled through those lightly populated areas of West Virginia and southern Ohio. During this time the train lost its all-Pullman status and in October of 1964 was renamed as just the National. 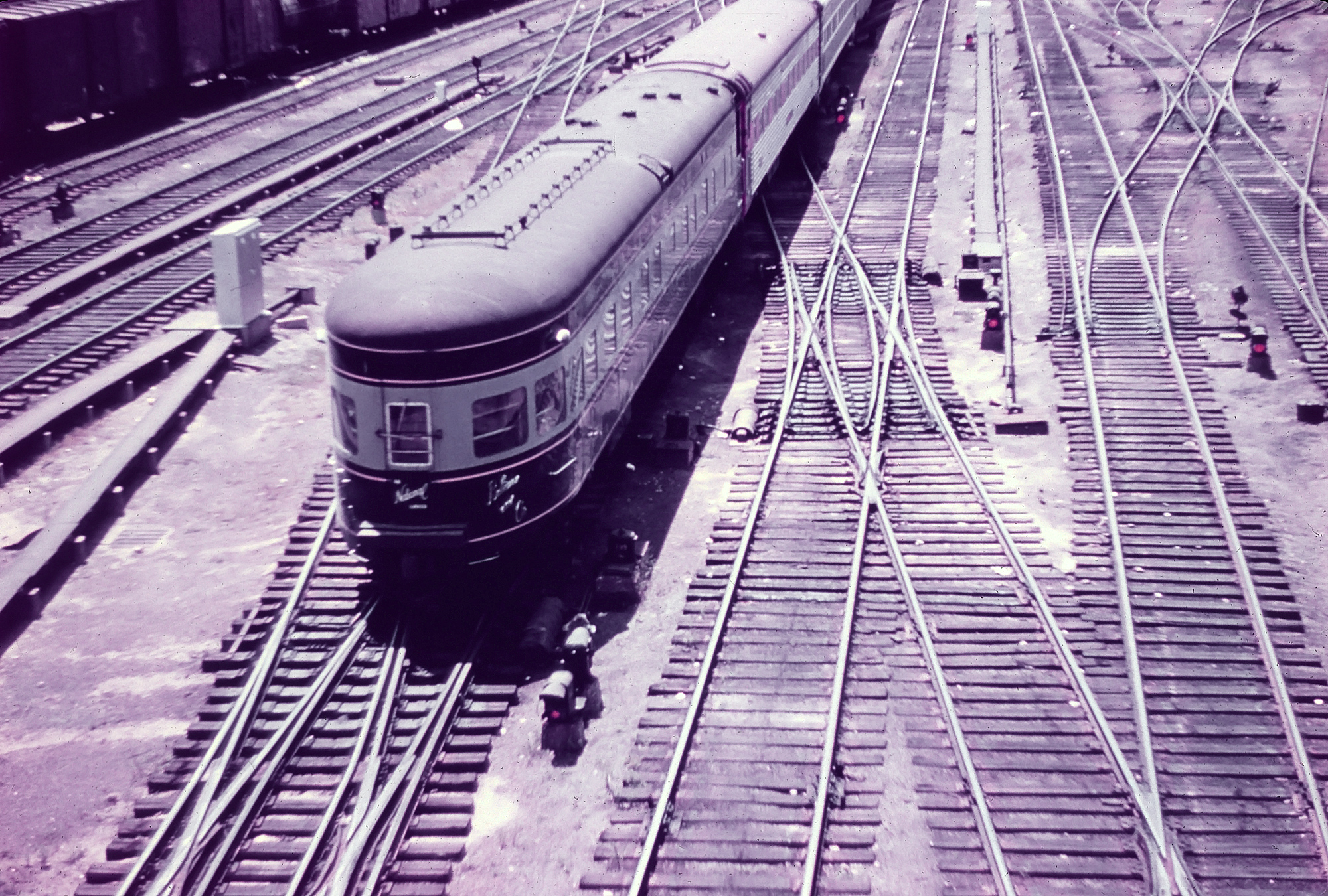 A year later the B&O gave up on the train altogether and then-owned by the Chesapeake & Ohio the equipment was transferred to the C&O's George Washington in September of 1965.

However, the B&O maintained service between Baltimore/Washington and St. Louis through the Metropolitan.

Listed as trains #11 and #12 the Metro was not much more than a glorified commuter operation during its final years, usually carrying only a few reclining-seat coaches and lacked food service.

In spite of this the railroad maintained top quality, friendly service and made sure its equipment was clean, presentable, and always on time.

Naturally, when Amtrak began operations on May 1, 1971 it did not include the route within its system (while it would experiment with various trains on the corridor later that decade it gave up altogether on the Baltimore/St. Louis market by the early 1980s).