And, as Southern states typically go, North Carolina offers spectacular scenery as a backdrop to railroading operations, whether you are along the coast, in flatlands of the Piedmont, or high in the Smoky Mountains.

The Tar Heel State also has a rich railroading heritage dating back to the early 1830s and during its peak was home to no fewer than four eastern Class I railroads with the highly profitable and respected Atlantic Coast Line headquartered in its coastal and port city of Wilmington until 1960.

North Carolina has suffered its share of abandoned corridors (over 2,000 miles) but much of its network is still intact.  The graph below illustrates these changes.

In recent years the state has worked hard to develop commuter rail from Asheville to Wilmington.  That project still ongoing and its unclear if it will be completed.

In any event, the article here also provides additional links to other pages here at the site which relate to either North Carolina's railroad history or present day operations. Be sure to check them out. 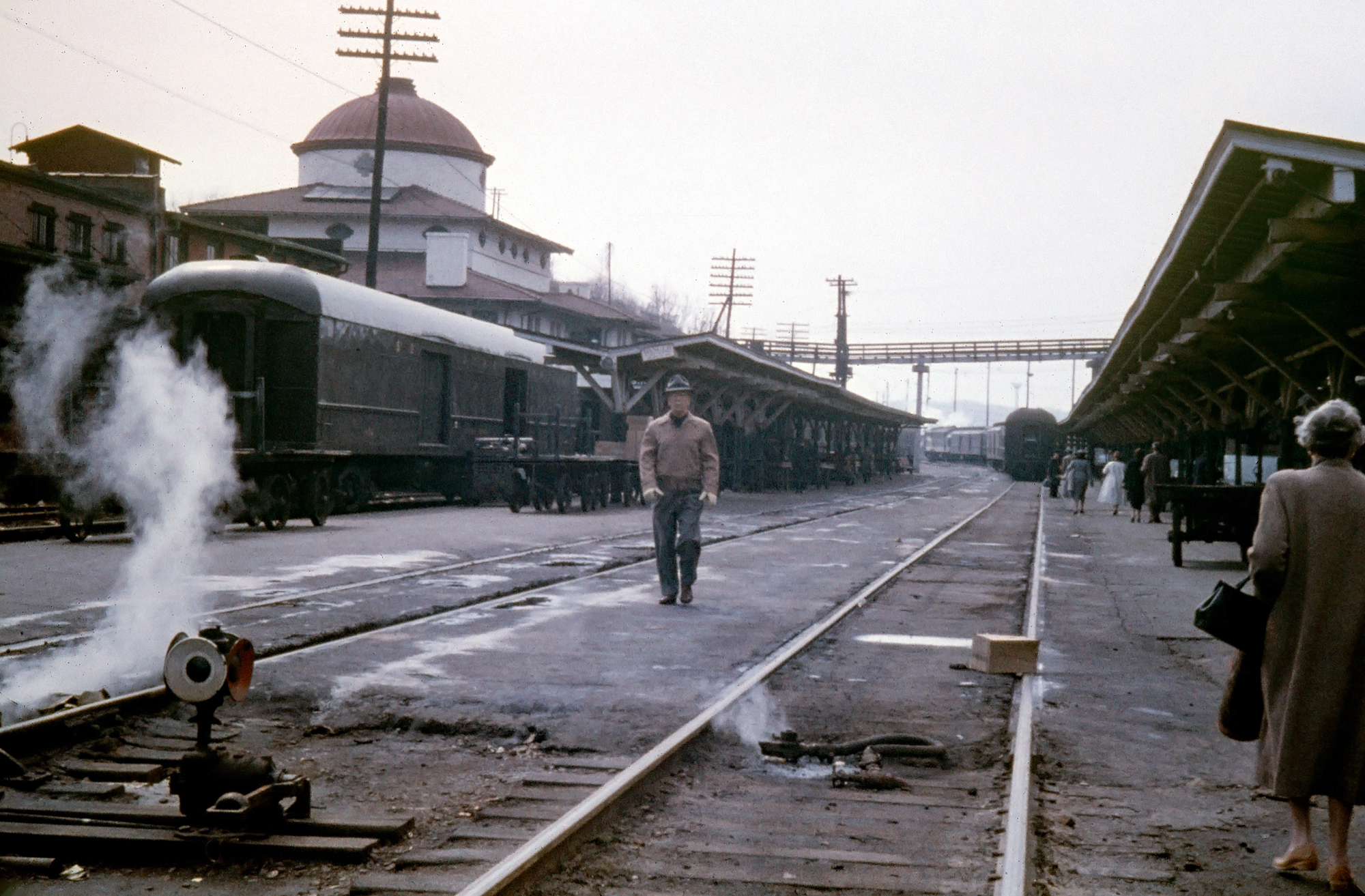 North Carolina's first system dates back to 1833 when the Wilmington & Weldon Railroad was charted to connect its namesake cities, which it completed on March 7th, 1840.

By doing so the railroad became the longest railroad operated in the world at that time, spanning some 161 miles! By the turn of the century the W&W would become part of the ever-growing Atlantic Coast Line system.

Following the W&W's opening, North Carolina quickly became an important traffic generating and terminating state as it not only grew much tobacco and cotton but also became heavily industrialized, particularly in textiles. In time the Tar Heel State would become home to four of the South's best-remembered railroads. 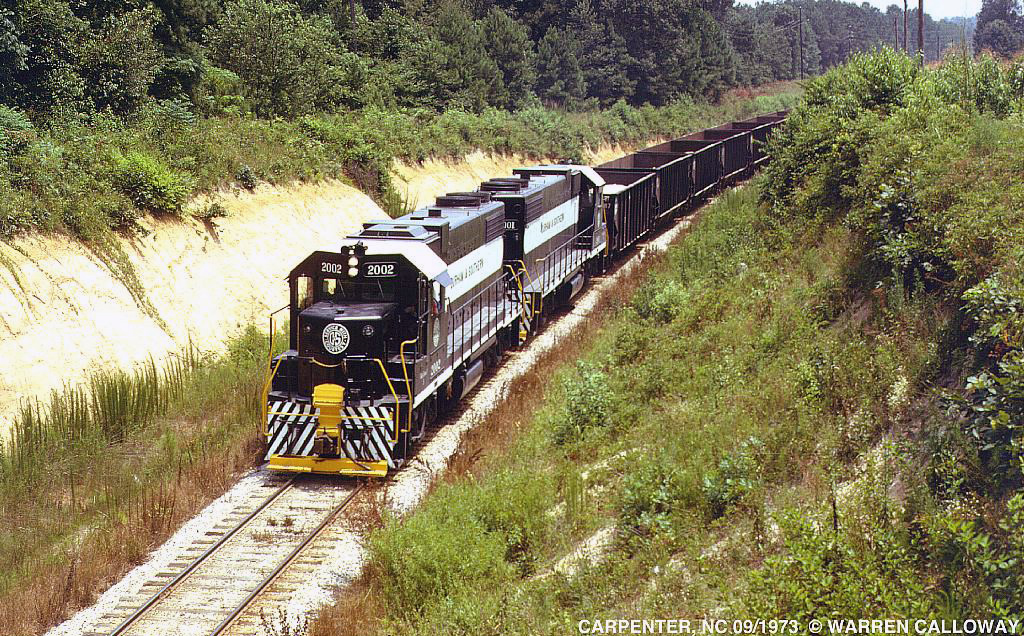 Today, North Carolina is mostly the realm of CSX and Norfolk Southern Railway with NS's ex-Southern main line running through Charlotte and Greensboro (along with numerous other secondary lines) and CSX's ex-Clinchfield in the mountains and SAL and ACL main lines near the coast. 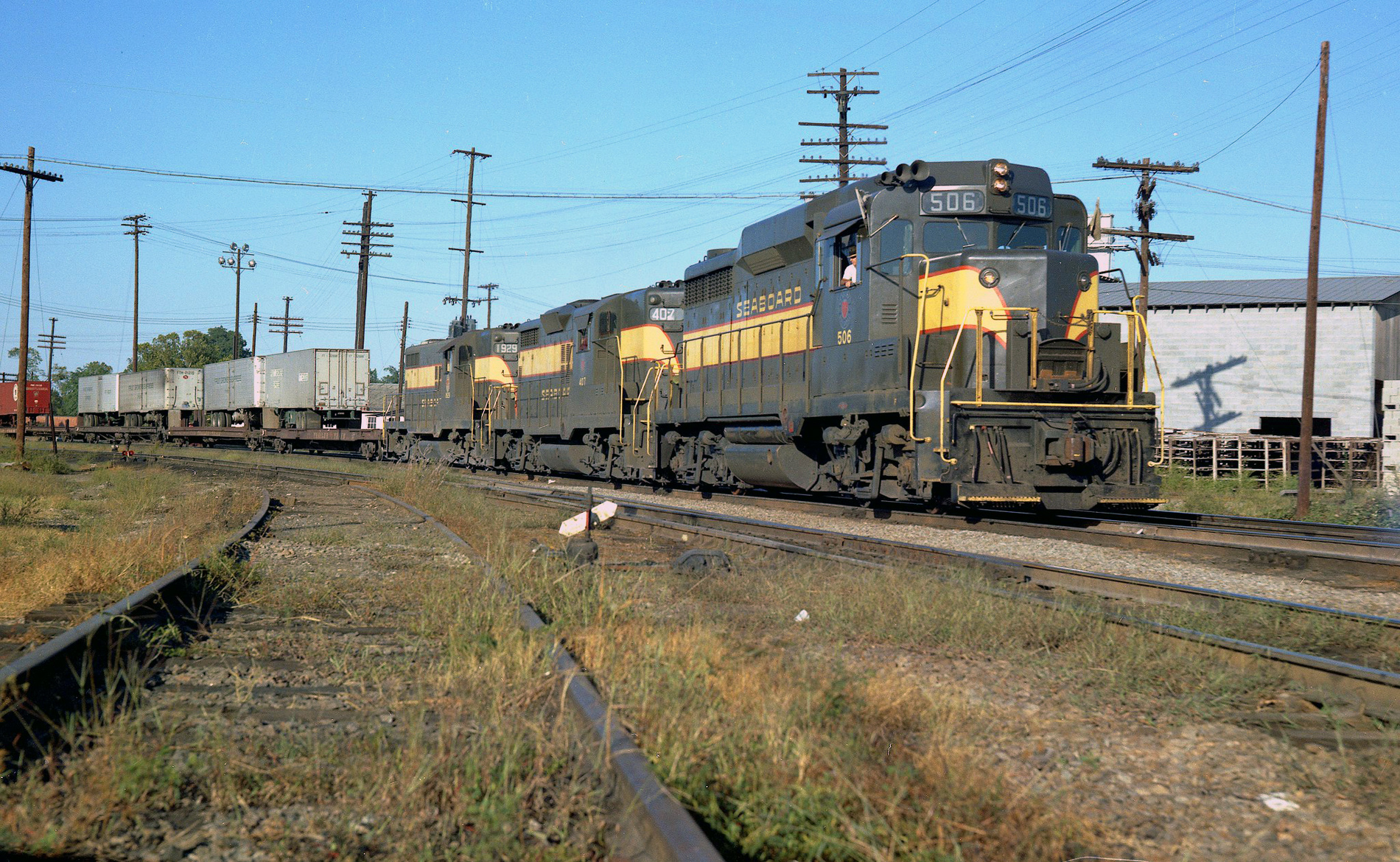 Having visited North Carolina on countless occasions throughout my life I must say that its railroading is very unique and interesting as it really does offer a little of everything from an operational standpoint.

I have seen both the Laurinburg & Southern and Chesapeake & Albemarle Railroads in operation and enjoyed every bit of it.

I also was lucky enough to have a friend give me a quick tour of Raleigh's rail operations (which includes both NS and CSX) and was as fascinated by the scenes of history still present, as the trains themselves. 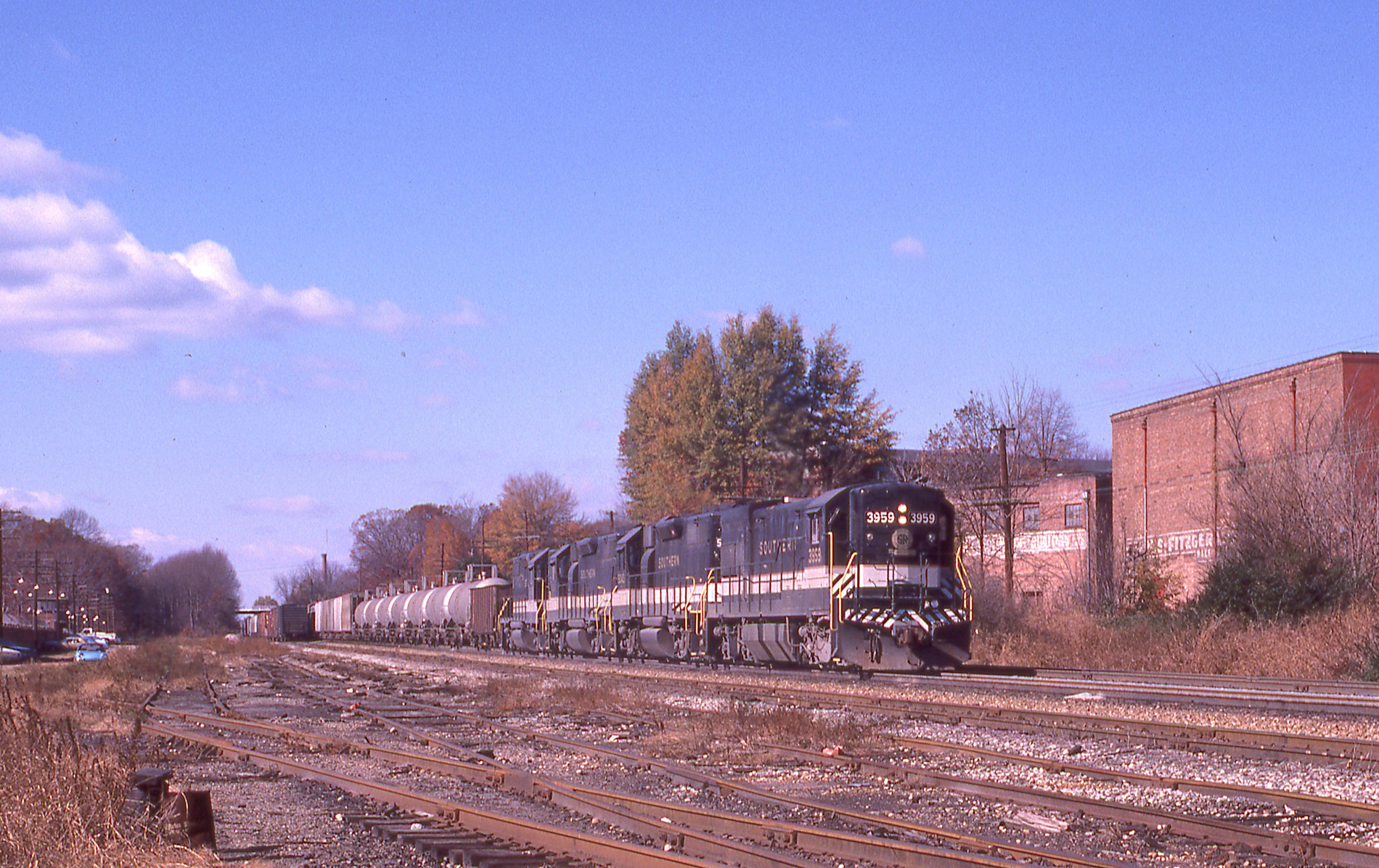 With a loss of about 41% of its railroad infrastructure since then, North Carolina has fared better than the national average of 45%-50%.

Additionally, in recent years the state has been proactive in preserving rail corridors for potential future use. For more information on North Carolina in terms of route mileage over the years please take a look at the chart below. 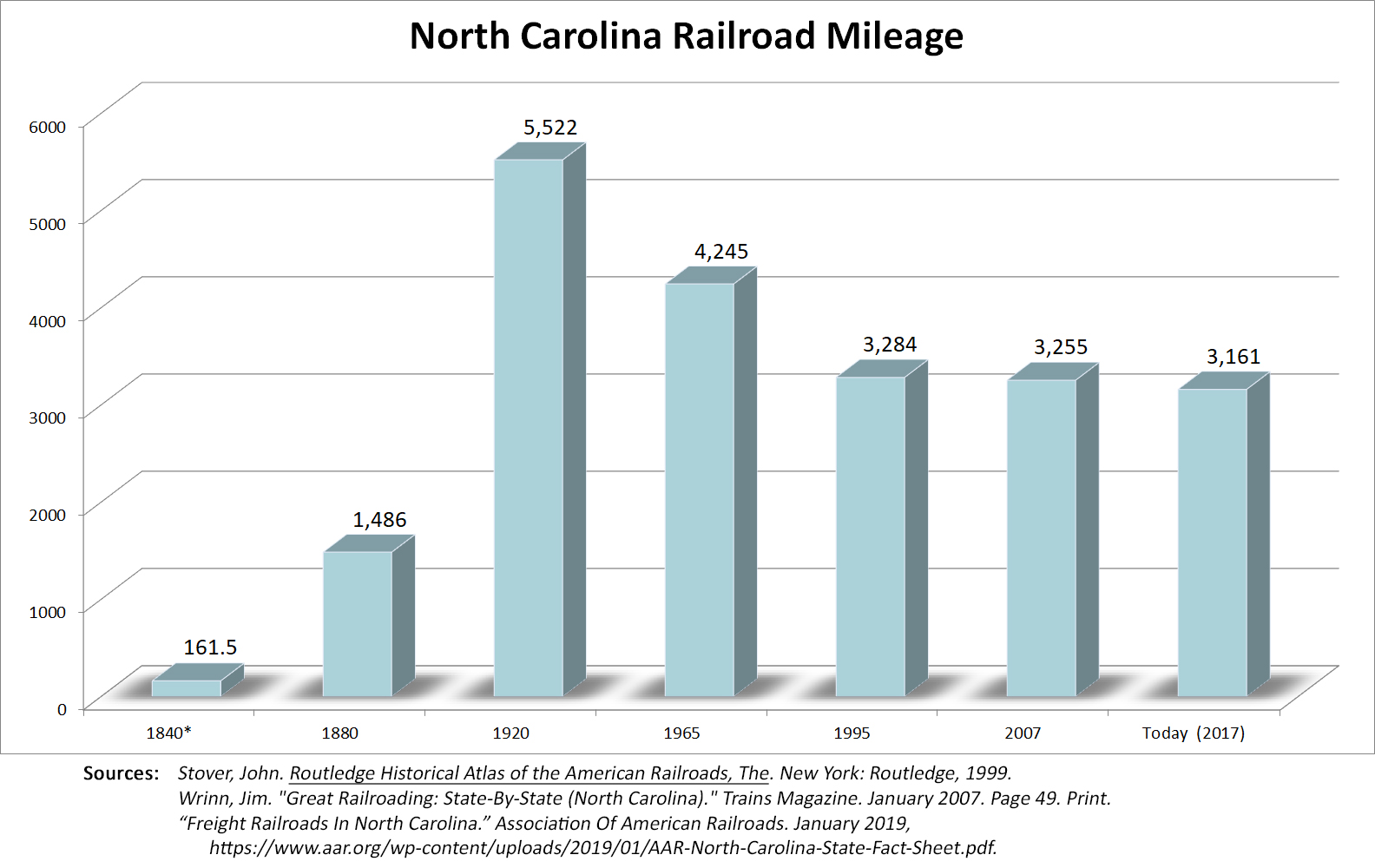 * While America's railroad first could be found in New England the South wasn't far behind.  Business leaders and plantation owners saw this new form of transportation as a major boon to production and profits, not to mention its ability to bolster the region's ports (notably Wilmington, North Carolina and Charleston, South Carolina).

North Carolina's first railroad was the Wilmington & Raleigh, chartered in 1834 to link its namesake cities.  After political wrangling was ironed out, the road was completed on March 7, 1840 at a distance of 161.5 miles.  Its name was changed to the Wilmington & Weldon in 1855 and would go on to join the modern Atlantic Coast Line system.

Passenger and commuter rail in North Carolina are, to put it bluntly, a step above the rest of the country. The Tar Heel State is being proactive in recognizing the benefits of rail and has planned accordingly.

Not only does the state own the North Carolina Railroad (NCRR), which owns a rail corridor running between Charlotte and Morehead City but also owns significant abandoned rights-of-way in the state that it deems important for possible future rail service. 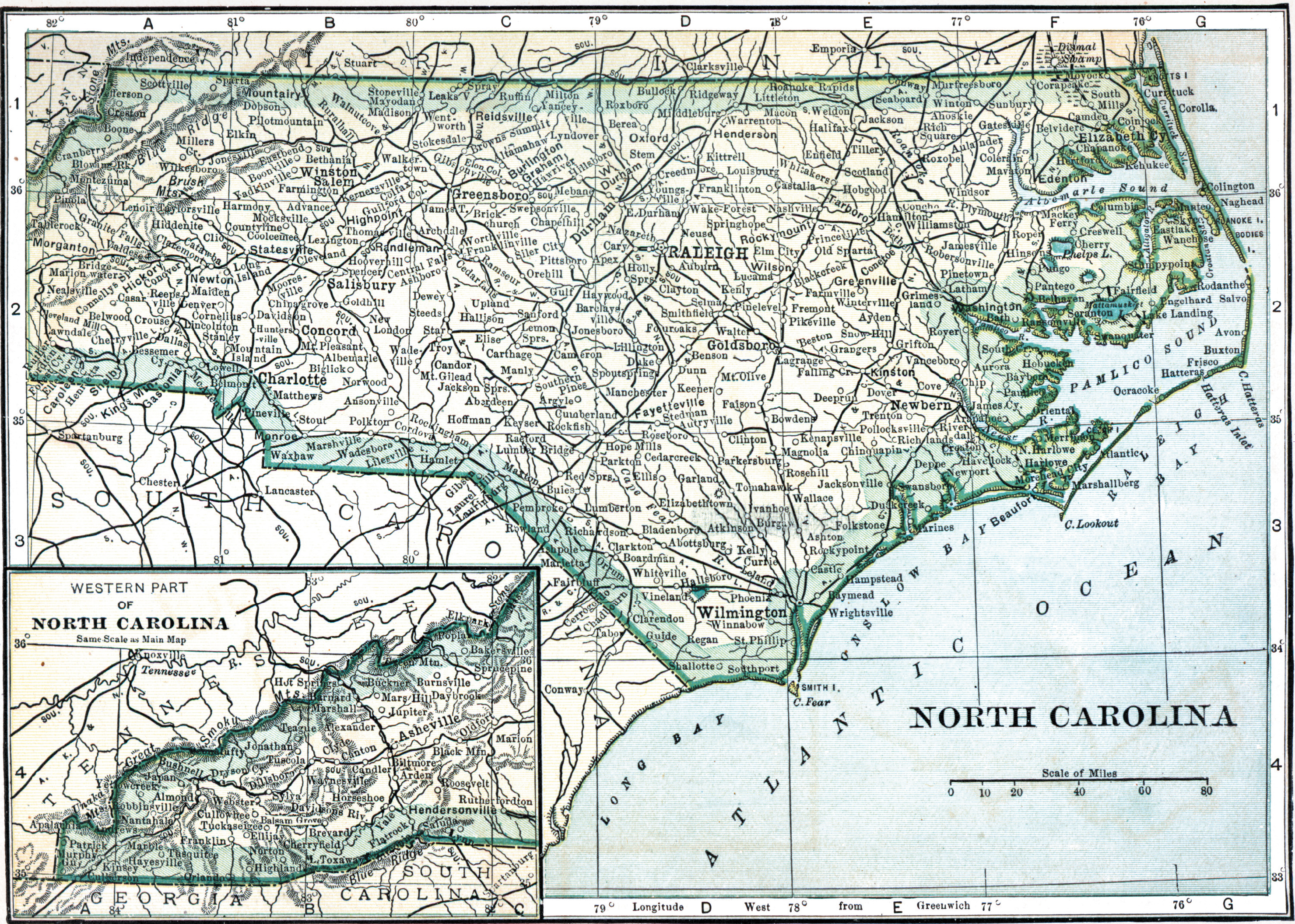 Today, the NCRR is leased to Norfolk Southern, which handles freight service over much of the route (between Charlotte and Raleigh) and oversees the ongoing upgrades being paid for by the State of North Carolina.

The state also subsidizes its own passenger trains over the line. With the help of Amtrak, North Carolina operates the Charlotte-New York Carolinian and Raleigh-Charlotte Piedmont (in addition Amtrak also operates its own Crescent and Silver Service through the state). 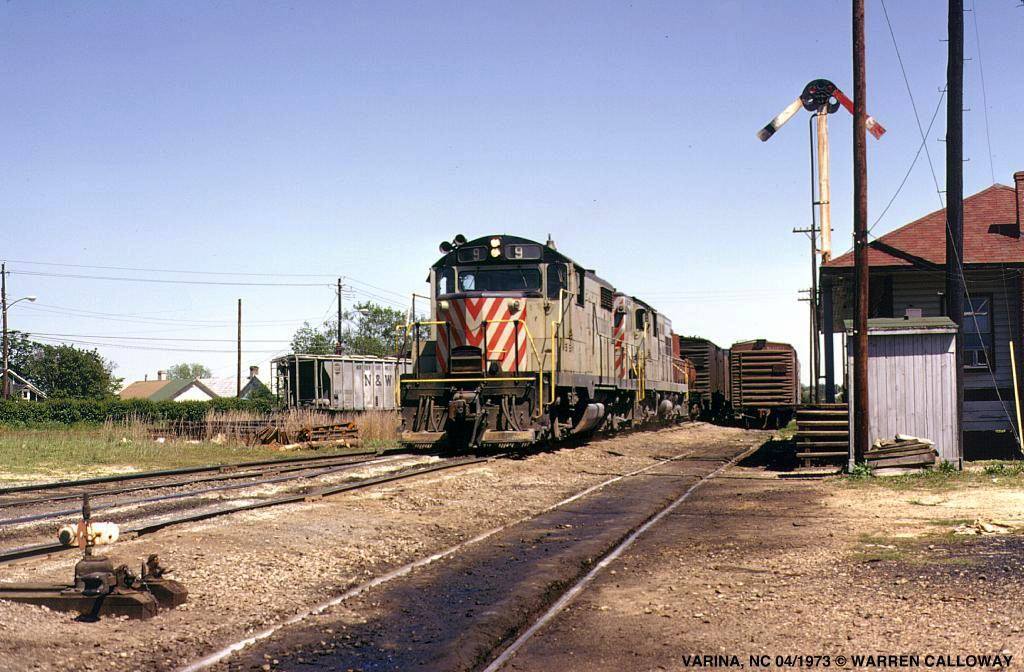 Norfolk Southern GP18 #9 and an AS416 have a local freight heading west past the small depot in Varina, North Carolina during April, 1973. The building still stands today. Warren Calloway photo.

The state has paid for the restoration of numerous historic railroad depots along its route to be used for daily passenger service and is currently planning operational extensions as far east as Wilmington and as far west as Asheville.

And, what's more, North Carolina plans to develop all of this trackage into a high-speed corridor.

North Carolina also features several museums and tourist railroads such as the North Carolina Transportation Museum in Spencer which is home to the largest still-standing roundhouse at 37 stalls.

The state of North Carolina was an important originator and terminator of freight traffic for railroads.  Not only did it produce everything from agriculture to textiles and merchandise but also exported goods through the port of Wilmington.

Ironically, most rail service to the state's largest port city is abandoned today (all of which were components of Atlantic Coast Line).

North Carolina has worked to renew rail service to Wilmington, not only for freight but also commuter/regional rail.  Unfortunately, this has yet to occur.

In the eastern/coastal regions, large sections of the old, original Norfolk Southern system are abandoned, or see little freight today.

You can also find most of the historic short line Durham & Southern removed today, abandoned in the early CSX era following its acquisition by Seaboard Coast Line in 1979.

Other notable abandonments include:

Others include the Great Smoky Mountain Railway in Dillsboro and Bryson City that offers spectacular views of the Smokies.

All in all, the  state offers some fantastic and unique operations, with spectacular scenery that only a Southern state could provide.

If you are planning a trip you may want to focus on one specific area that interests you most, such as the mountains, Piedmont region or coastal plains as there is far too much to see unless you have lots of time to visit all three parts of the state. 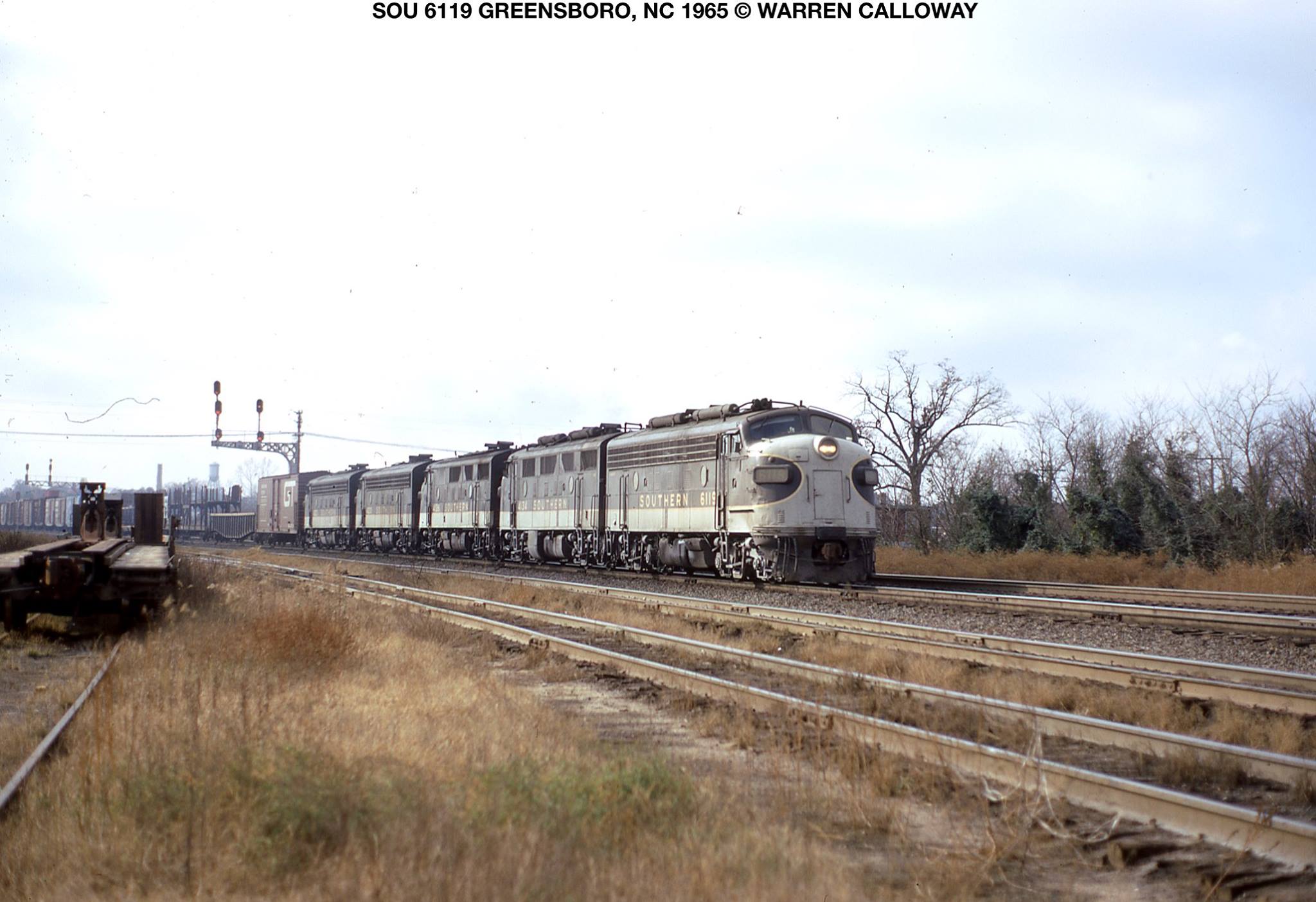 Southern Railway F7A #6119, a pair of F3A's, and two other covered wagons are ahead of a mixed freight passing through Greensboro, North Carolina in 1965. Warren Calloway photo.

The site is still a lengthy work in progress so please be patient as more material is added. And on that note, here are few final recommendations you may want to visit: