The Niles Canyon Railway is one of California's many tourist lines providing excursions to the public on a former Southern Pacific (SP) route in Alameda County that extends a little under 10 miles.

The history of the corridor can be traced back to the days of the Civil War.  The SP discontinued service in the mid-1980s and subsequently abandoned the line.

However, thanks to the hard work of many volunteers a section was rebuilt a few years later and today provides a popular tourist attraction for thousands.

Today, the railroad has grown to the point that it now offers trains pulled by steam locomotives with several specials hosted throughout the year. 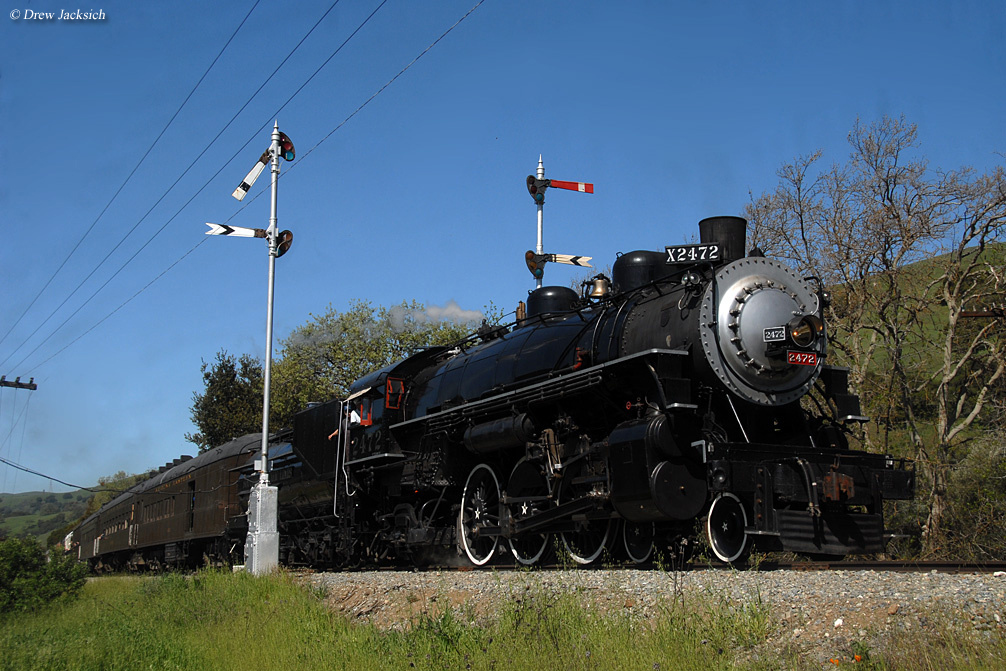 The history of the Niles Canyon Railway's route is quite historic, tracing its roots back to the completion of the Transcontinental Railroad.

That famous event concluded on May 10, 1869 with the celebrated "Golden Spike Ceremony" held to commemorate the completion of the Central Pacific and Union Pacific railroads at Promontory Summit, Utah.

While this event is well-known there was still more work to be done, namely the Central Pacific's efforts to finally complete the link to the San Francisco Bay.  This project was delayed by rugged terrain, notably the Alameda Creek and Niles Canyons.

An old CPRR subsidiary, the Western Pacific Railroad Company, had been working to open a route to the bay since 1862 and was finally able to do so by September of 1869.

Following the completion of the Transcontinental Railroad it was not long before the CPRR became a subsidiary of the growing Southern Pacific system when the latter leased the former on April 1, 1885.

Both railroads were under common ownership and the CPRR slowly faded from history after this time (although, as a corporation, it survived on paper until June 30, 1959).

Under SP control the route was operated as a main line to the San Francisco Bay until subsidiary Central Pacific completed a low-grade via Benicia in 1879.

The Niles Canyon line, while more circuitous and steep, eventually settled into the role of "relief valve" for freights out of and into the Bay Area.

As rail service declined sharply in the postwar years the Niles Canyon route saw increasingly less use.   Eventually, a financially ailing SP and declining freight traffic within the San Francisco Bay Area led the railroad to abandon the line in 1984, deeding the right-of-way to Alameda County.

In a rather rare event related to railroad abandonment part of the right-of-way sat empty for only a few years.

In 1987 the Pacific Locomotive Association (PLA) entered into an agreement with the county allowing for rails to be re-laid on a section of the corridor, a project completed about a year later.   Today, just over 9 miles of trackage has been returned to service between Pleasanton and Niles/Fremont via Sunol.

Niles Canyon Railway 10-Ton Switcher #103 (Originally built by the Plymouth Locomotive Works for the Santa Catalina Island Company as #103 in November of 1929.)

Southern Pacific ML-4000 #9010 (Under restoration.  A rare, diesel-hydraulic design it was originally built by Germany's Krauss-Maffei in 1964.  Significant restoration work has largely seen it returned to original appearance.  The only of its kind still in existence.  The group hopes to one day have it operational.) 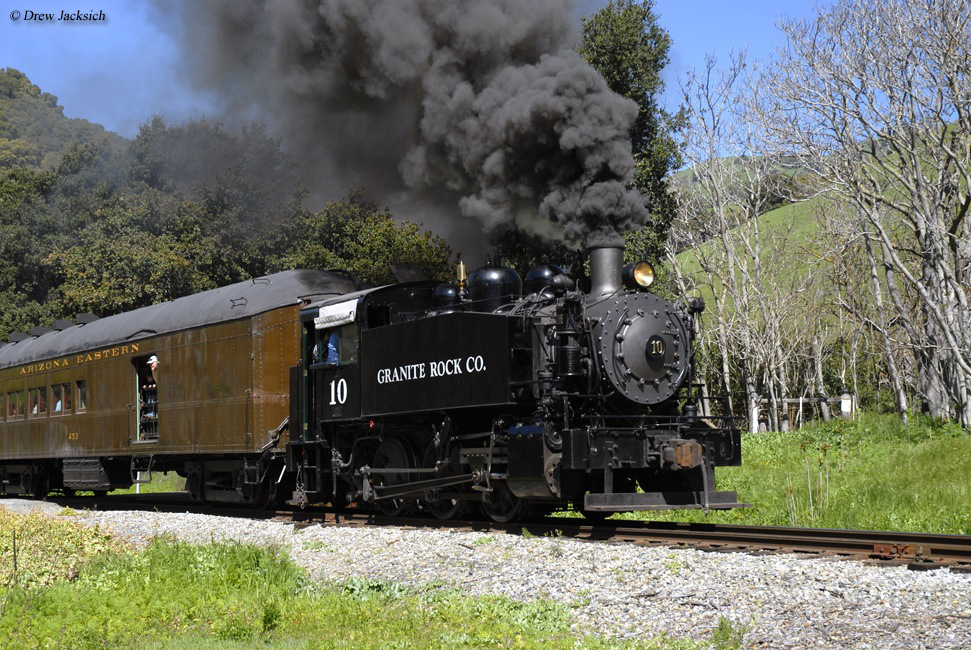 In addition to the route's history, where engineering projects built by the original CPRR can still be seen (such as culverts), the Niles Canyon Railway also features a beautifully restored SP depot constructed in 1884 at Sunol.

The building, architecturally, is the last of its type, designed in the railroad's "Number 7" format.  Inside you can see displays while the freight room is used for meetings.  Of course, for all of the route's history most folks come for the trains.

Since its inception, the PLA has amassed an impressive collection; more than half-dozen steam locomotives, four  of which are operational and more under restoration (including rare Clover Valley Lumber 2-6-6-2T Mallet #4), and even more diesels of various heritage. 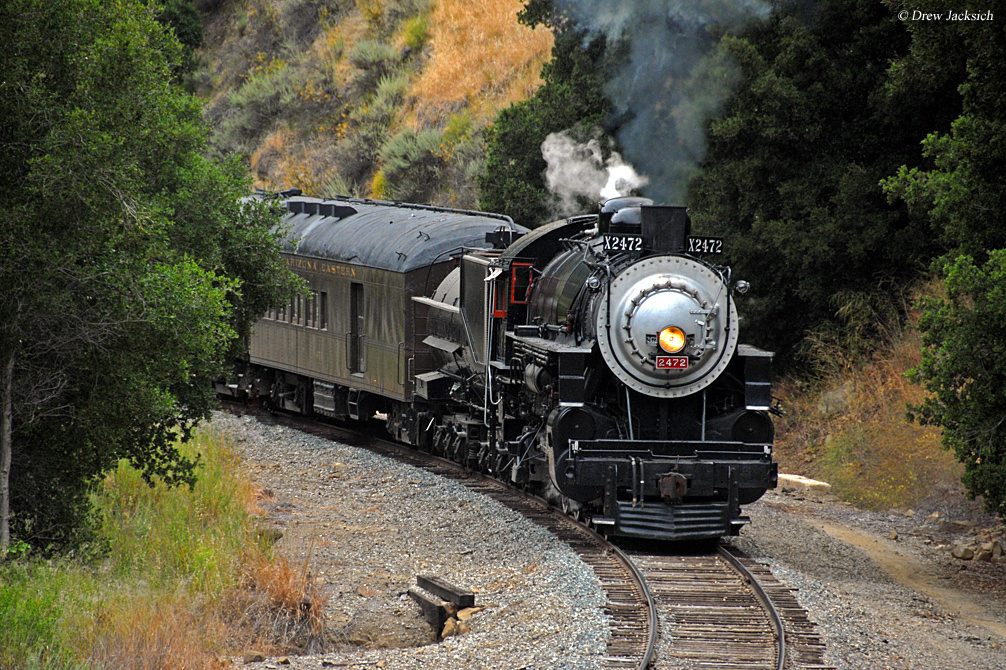 In addition to all of their motive power the group also owns an impressive list of rolling stock, which they are slowly working to restore.

This cars range from cabooses and early, outside-braced wooden boxcars, to Railway Post Office cars (RPOs), diners, coaches, and much more.   They host excursions throughout the year thanks to the region's mild climate.

However, their most popular trips are normally during the holidays such as the Train of Lights for Christmas, fall specials, Valentine's Day Special, and spring events among others.  To learn more about dates and scheduling please visit their website.