One of the most scenic and visually stunning locations along the Milwaukee Road's Pacific Coast Extension was a rather small, simple deck plate girder bridge and tunnel at a location known as Sixteen, Montana.

What became known as Eagle Nest Tunnel, located along the main line between Harlowton and Three Forks, the bridge and tunnel are spectacular for how the entire project was built; the tunnel was cut into a small cliff-face and empties out directly onto the bridge which spans a small creek.

With the Milwaukee Road's abandonment of its Extension in 1980 this section of the line lies dormant today and has not seen a train in over 40 years. The Milwaukee Road is an unfortunate tale of "what could have been's."  The argument is often made the railroad should have never went west.

Its attempt to compete against the Great Northern and Northern Pacific for the lucrative Pacific Northwest transcontinental traffic resulted in crushing debt (particularly the electrification project) that ultimately forced the company into bankruptcy in 1925, and again in 1935.

It is somewhat ironic then that "Lines West" was actually one the railroad's few profitable components when it entered bankruptcy for a final time in 1977. 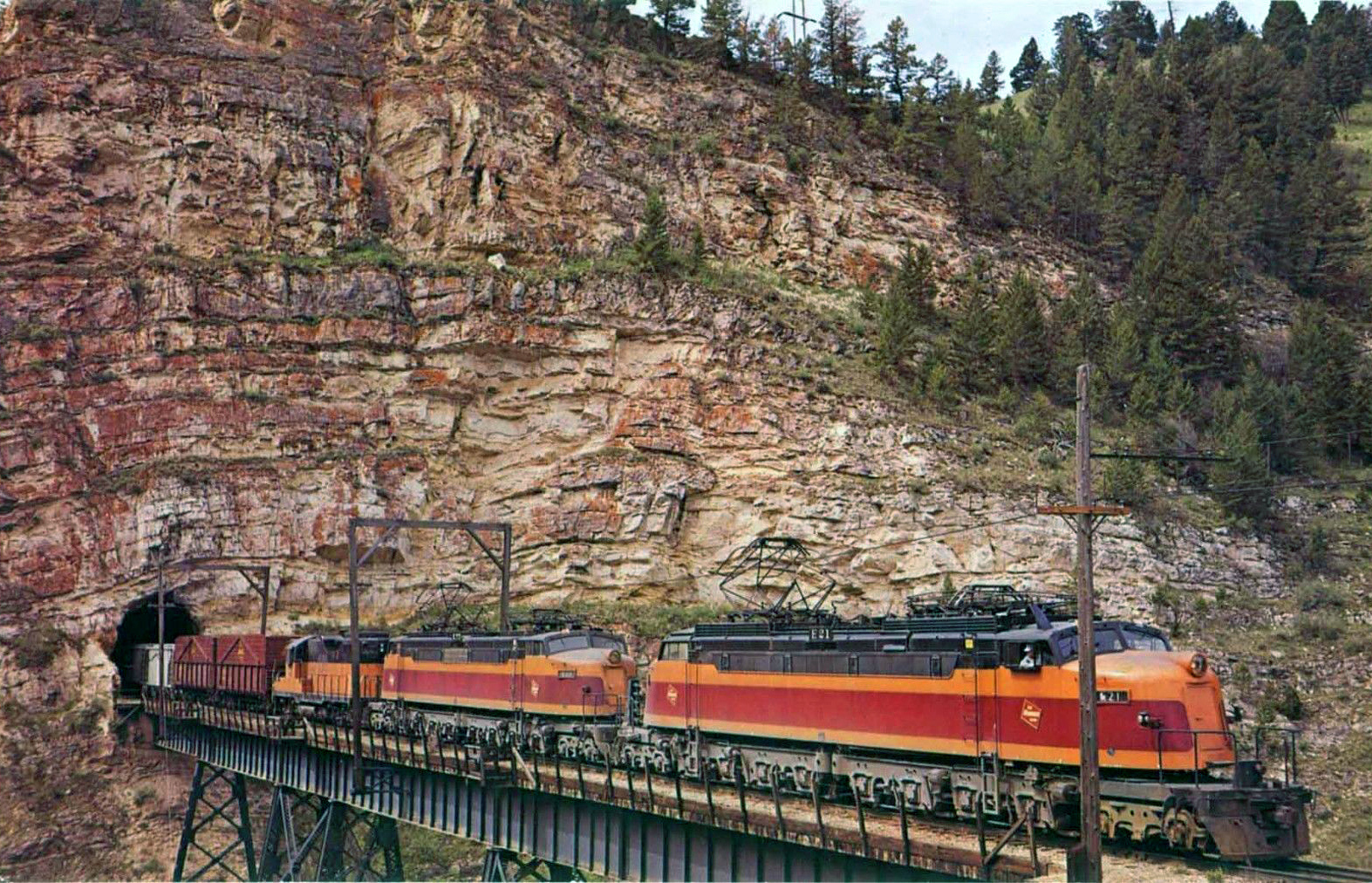 Milwaukee Road 2-D+D-2 "Little Joes" E-21 and E-77, along with GP9 #804, are ahead of an eastbound freight at picturesque Eagle Nest Tunnel as the train crosses Sixteen Mile Creek within Montana's Belt Mountains on May 20, 1962. Ronald Nixon photo.

The Milwaukee Road was not your typical railroad; it was entirely independent of powerful names like Vanderbilt, Gould, Harriman, and Huntington.  It even avoided a takeover by the "Empire Builder," James Hill.  In many respects, the system should still in operation today, or at least the bulk of its network.

After World War II traffic patterns shifted and by the 1960's and 1970's America's western ports were seeing an increasing level of business.

With a superbly engineered main line that avoided most metropolitan centers between Chicago and Seattle, the Milwaukee was a perfect intermodal corridor.  Interestingly, its transcontinental route would make for an ideal Class I operation today, which covets point-to-point service.

What made the extension so terribly expensive was partly due to the right-of-way costs. Unlike the GN and NP the CM&StP was not given free government land grants and had to both purchase all of its land from private landowners as well as take over a number of small, new, or floundering railroads across the region.

Unlike much of the Pacific Coast Extension, the section between of the route between Harlowton and Lombard, Montana, a distance of about 91 rail miles did not require extensive surveying and preparatory work, as the Montana Railroad had already built a route through the region.

While the line, originally built between 1894 and 1900, was not up to the Milwaukee Road's specifications it did offer an excellent base from which to work.

As such, the Milwaukee Road entered a trackage rights agreement with the Montana Railroad in December, 1907 for 99 years although just over two years later in January, 1910 the latter company sold the route directly to the CMStP&P.

Between 1906 and 1910 construction crews (which was handled by contractors Dittmar, Breadbury & Weitbrec and McIntosh Bros.) worked to upgrade the route to Milwaukee Road's specifications. In doing so they straightened curves and eased grades, which usually consisted between 1% and 1.7%. 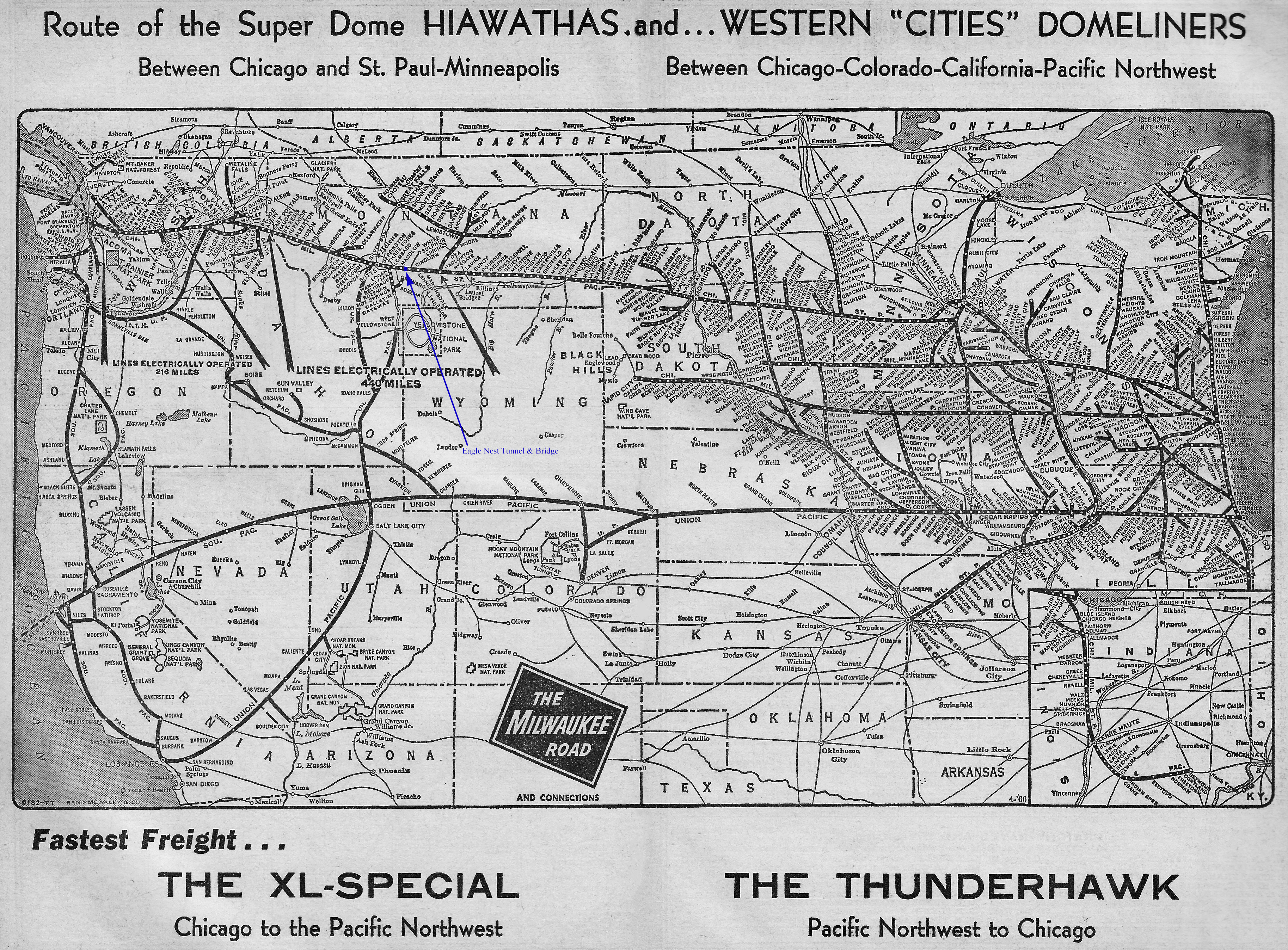 In doing so, surveyors and engineers cut a route through Sixteen Mile Canyon, which proved to be difficult and laborious with steep canyon walls and solid rock making up much of the area. The route through the canyon covered several miles and the location of Eagle Nest Tunnel and bridge crossed the Sixteen Mile Creek.

The bridge itself was a little under 300-feet in length and only stood about 100-feet in height to the rail head and its greatest. The tunnel was also rather small, being just a few hundred feet in length (which was quite small for most tunnels across the route!) although it was cut through solid rock. 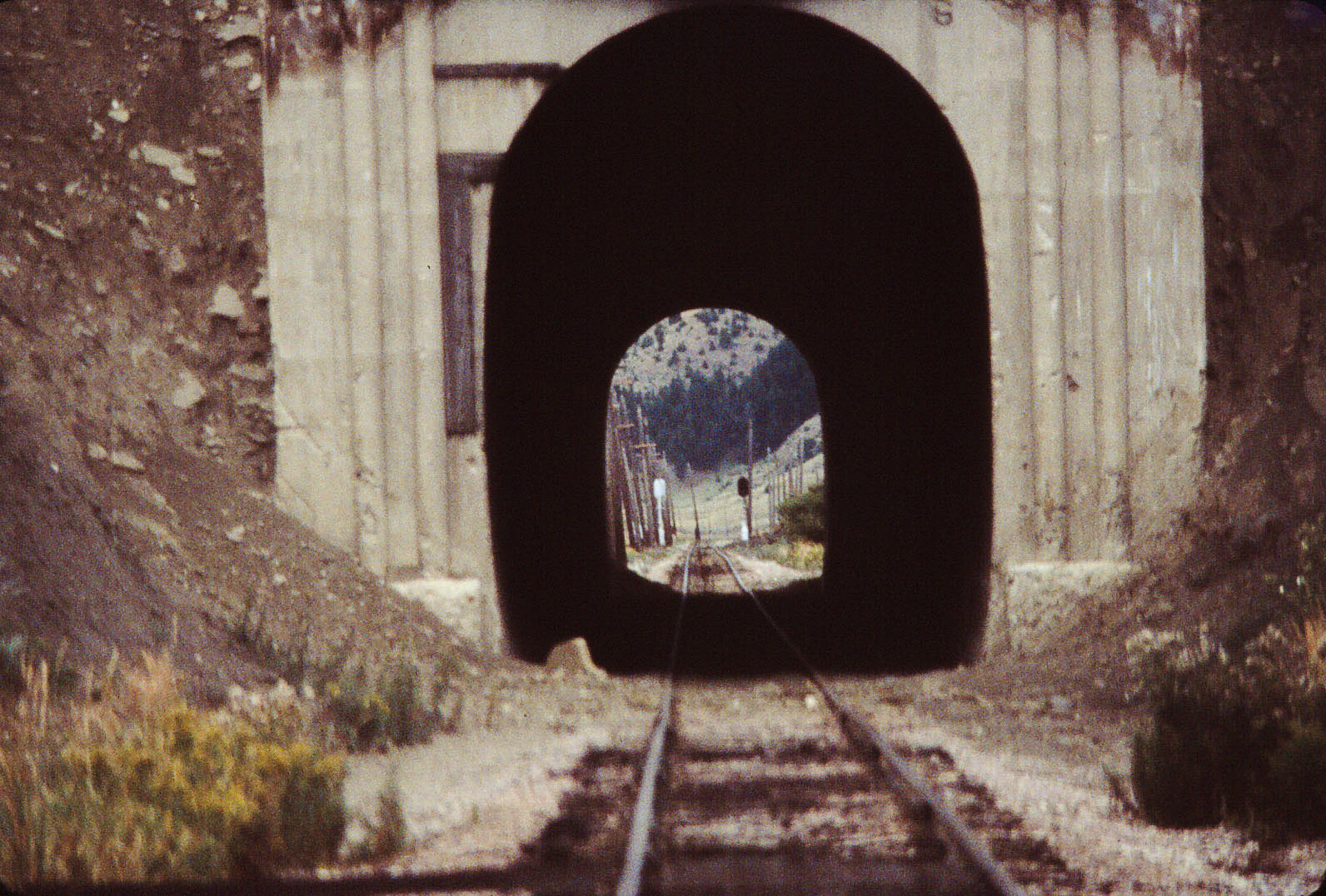 While Eagle Nest Tunnel was open cut-stone along its east portal next to the bridge, the west portal featured a standard concrete approach abutment.

What made the location so impressive was simply the way it was engineered with the tunnel cut directly into the mountain face and spilling directly onto the bridge spanning the creek bed.

To make train operations even more interesting for sightseers and railfans to witness, if they wanted to make the arduous journey to the remote location, was the electric locomotives operating on the line through June, 1974.

As it turns out, the Milwaukee Road found operating through Sixteen Mile Canyon quite difficult with a narrow right-of-way and unstable rock located in the area. The railroad would line most of the route through the canyon with fencing and warning lights in the event of rock slides, which were not uncommon.