The bridge was quite likely the railroad's most endearing landmark as it allowed a connection to its Jersey City Terminal, located on the waterfront directly across from downtown Manhattan.

Unfortunately, it is probably best remembered by the general public as being the center of a horrific accident when a commuter train plunged from the open draw killing more than 40 people (including the engineer). The bridge saw declining use, particularly after the Aldene Plan went into effect, which eliminated the Jersey City Terminal as a commuter station.

No longer needed, the US Coast Guard successfully lobbied to have the draws removed in the early 1980s the rest of the structure came down later that decade. Today, the only evidence a massive railroad bridge ever stood at the site are a few remaining concrete foundations protruding from the water. 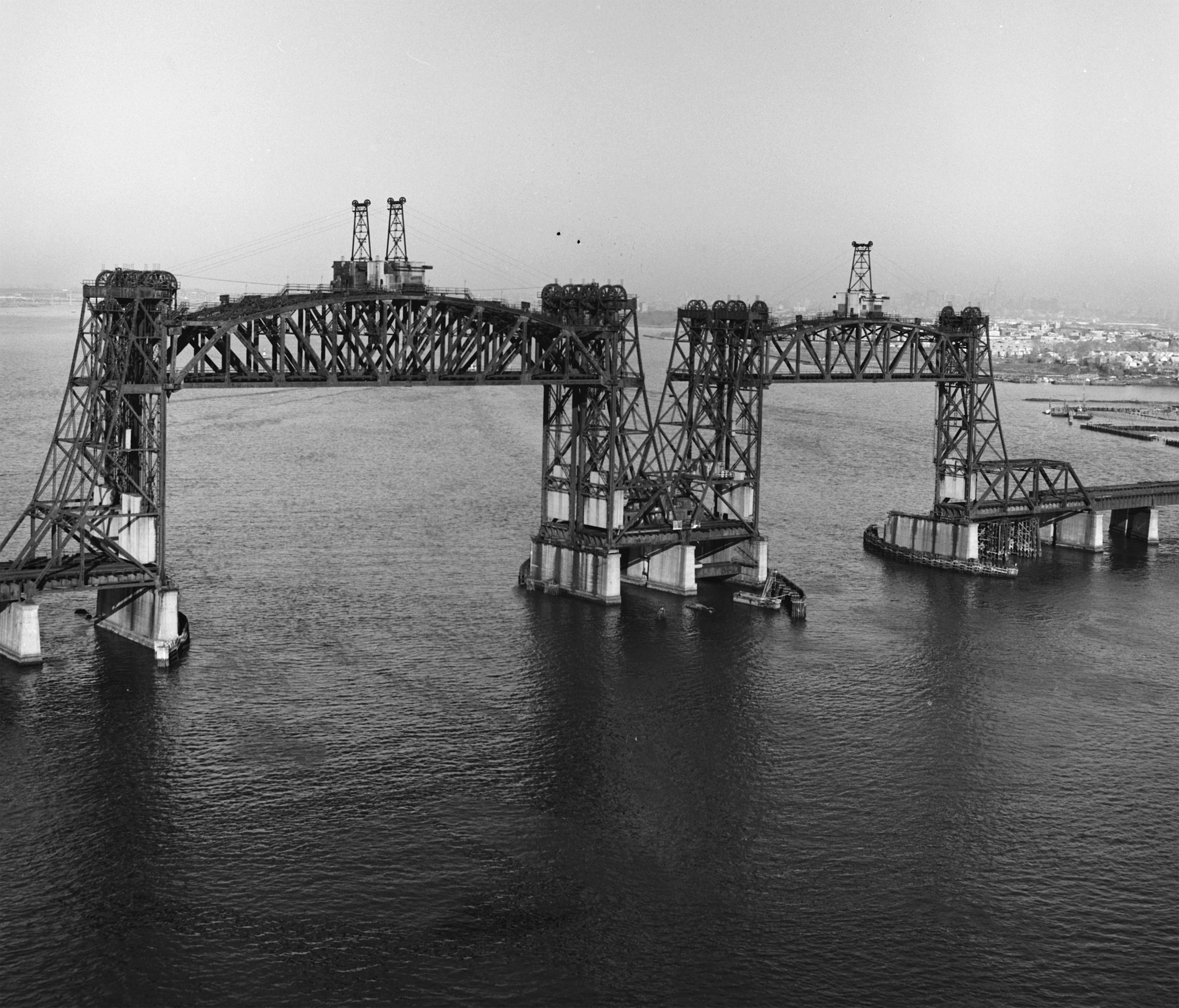 An aerial view of the Newwark Bay Bridge's two massive lifts. By the date of this photo (1979) the structure had not seen a train in over a decade and was deemed by the U.S. Coast Guard as an navigation hazard.

The Central Railroad of New Jersey has gone by a number of different names from CRRNJ and CNJ to Jersey Central and the aforementioned. Regardless of its many names the CNJ was a New Jersey institution for years although it was only regional in operation and was, at its peak, only 711 miles in length.

The Jersey Central served much of New Jersey along with northwestern Pennsylvania, Philadelphia, and Washington D.C. via a partnership with the Baltimore & Ohio Railroad.

The demise of the CNJ was the result of a number of factors including a region too saturated with railroads, stiff government regulation, and markets already served by more efficient competitors (such as the Penn Central). 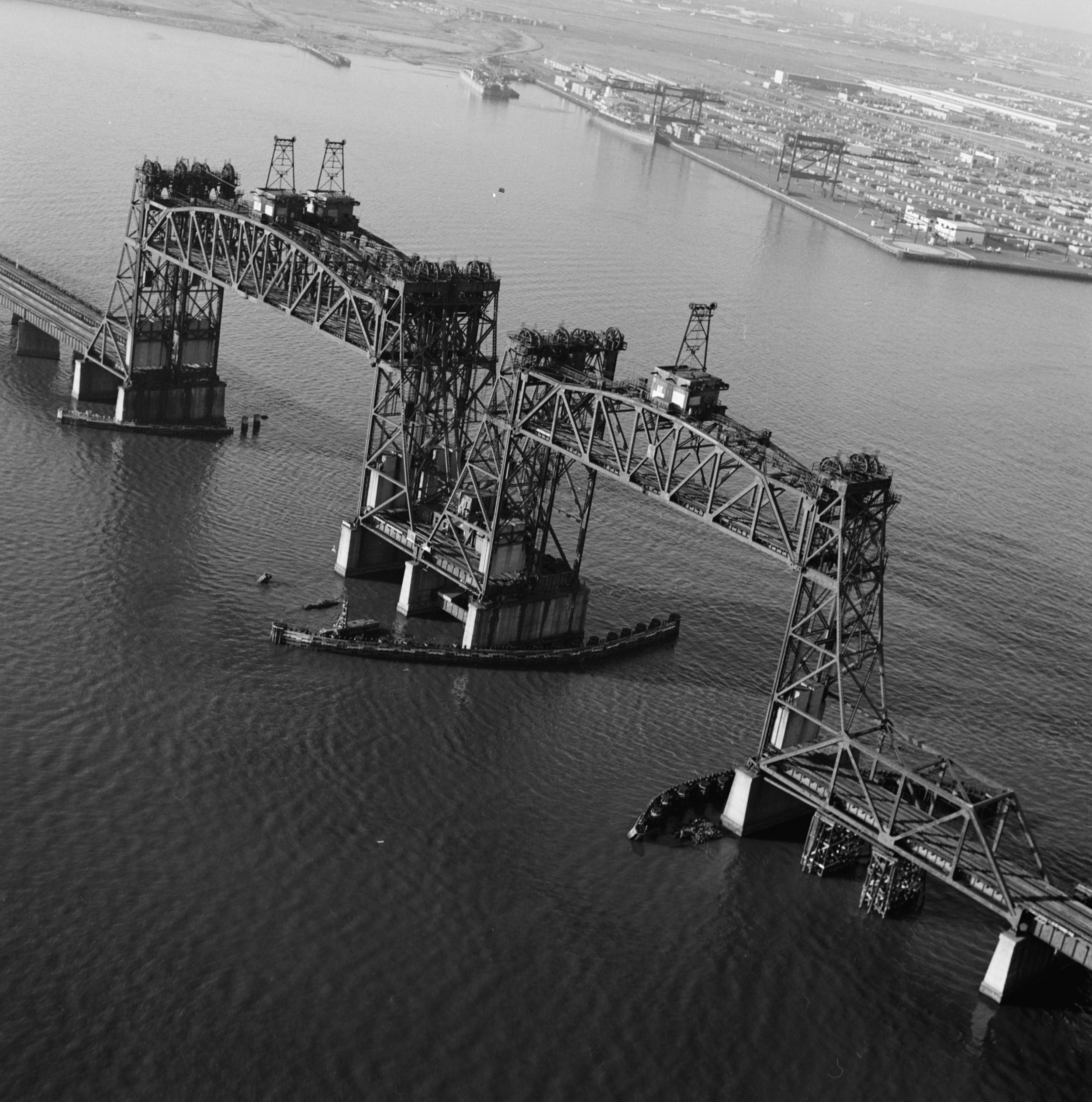 Another aerial view of the two huge lifts, taken at the same time as the above photograph. There was a considerable effort to save the structure and reopen it for commuter service but alas this failed.

However, for all of these setbacks it did not help that the railroad was taxed so stiffly by the State of New Jersey that this also ultimately led to the railroad's bankruptcy and inclusion into Conrail in 1976.

The history of Jersey Central's Newark Bay Bridge can be traced back to the first of three such structures, which spanned the bay, that opened on July 29, 1864. This first bridge was built mostly from wood pilings and timber and featured a center swing bridge 217 feet in length to let marine traffic pass through.

The second bridge to occupy the site was constructed in the early 20th century and opened in 1902. This second structure allowed for a double-tracked route and featured Scherzer rolling lifts, which allowed for about 85-feet of open waterway. Constructed of steel the lifts could be opened either independently or together. 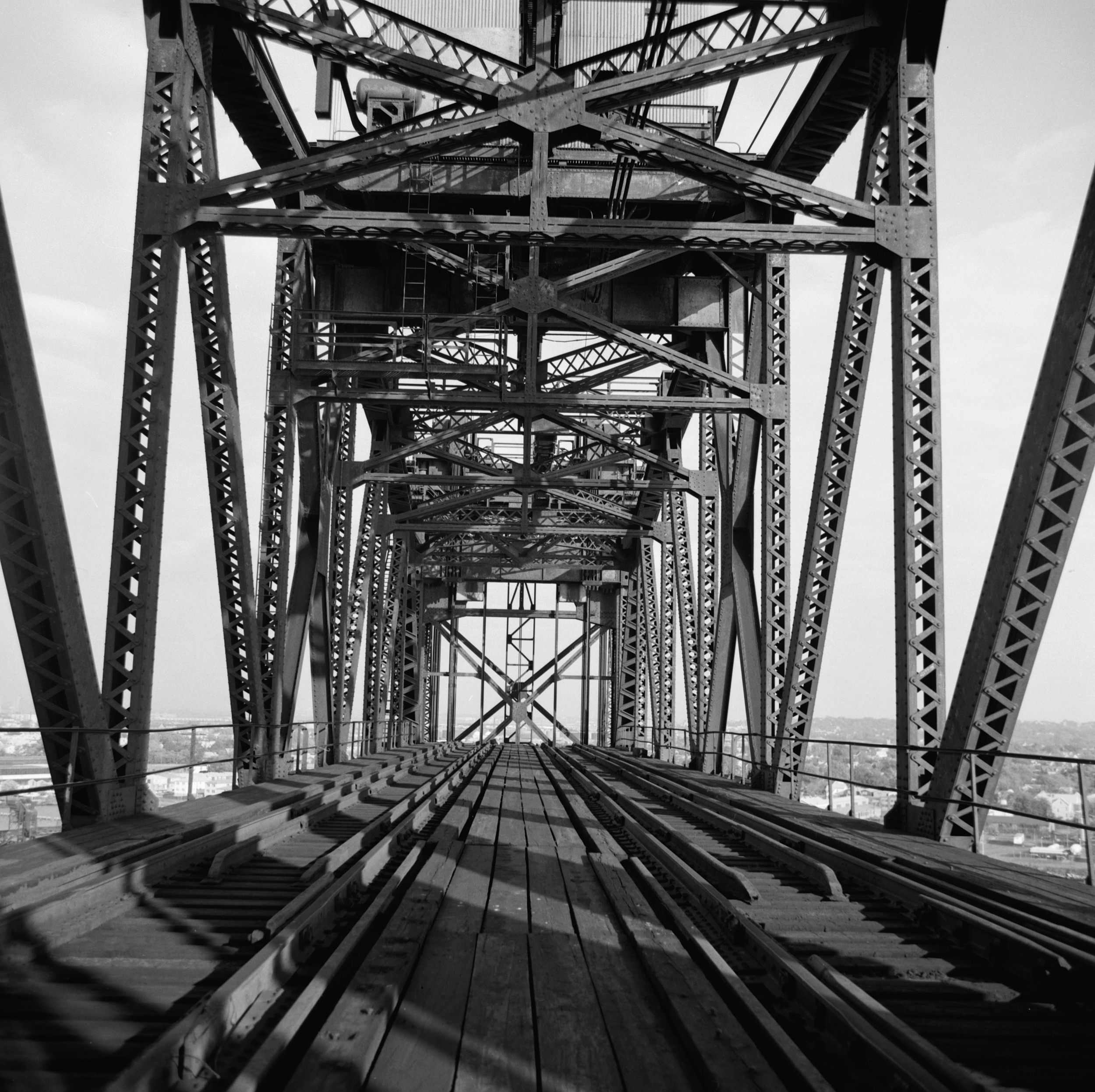 An interior view of one of the big lifts. The bridge was completed in 1926, designed by John Alexander Low Waddell, which replaced an older span which opened in 1901. Interestingly, this corridor provided the CNJ with a more direct route to the Hudson River (via Elizabeth, New Jersey) than the PRR.

By the 1920s commuter traffic to and from Jersey City, and other points along the CNJ's main line near New York City had reached a point that the current bridge could no longer handle the traffic.

This was further expounded by the fact that numerous other railroads used Jersey City Terminal such as the Reading, Erie, and Baltimore & Ohio.

To remedy this issue the CNJ constructed the now famous Newark Bay Bridge that opened in 1926, which was wide enough to support four-tracks, including the draws themselves. Overall the bridge was nearly two miles in length, rose about 35 feet off of the waterline, and weighed over 40,000 tons.

Known as "DY" in the CNJ's official timetable, at its peak the Newark Bay Bridge saw more than 140 trains every day, moving both freight and passenger traffic (primarily, however, many of these trains carried commuters, which was a staple of CNJ traffic).

In all likelihood the "unofficial" end for the Newark Bay Drawbridge began with the horrific commuter accident that occurred on September 15, 1958, as things only got progressively worse for the structure after that date.

The train involved in the accident was #3314 on the railroad's timetable with CNJ engineer Lloyd Wilmurn at the helm. At his disposal were two EMD GP7 diesel locomotives (#1532 and #1526), the lead (#1532) running long-hood forward (common practice on the CNJ), pulling four coaches and a combine. 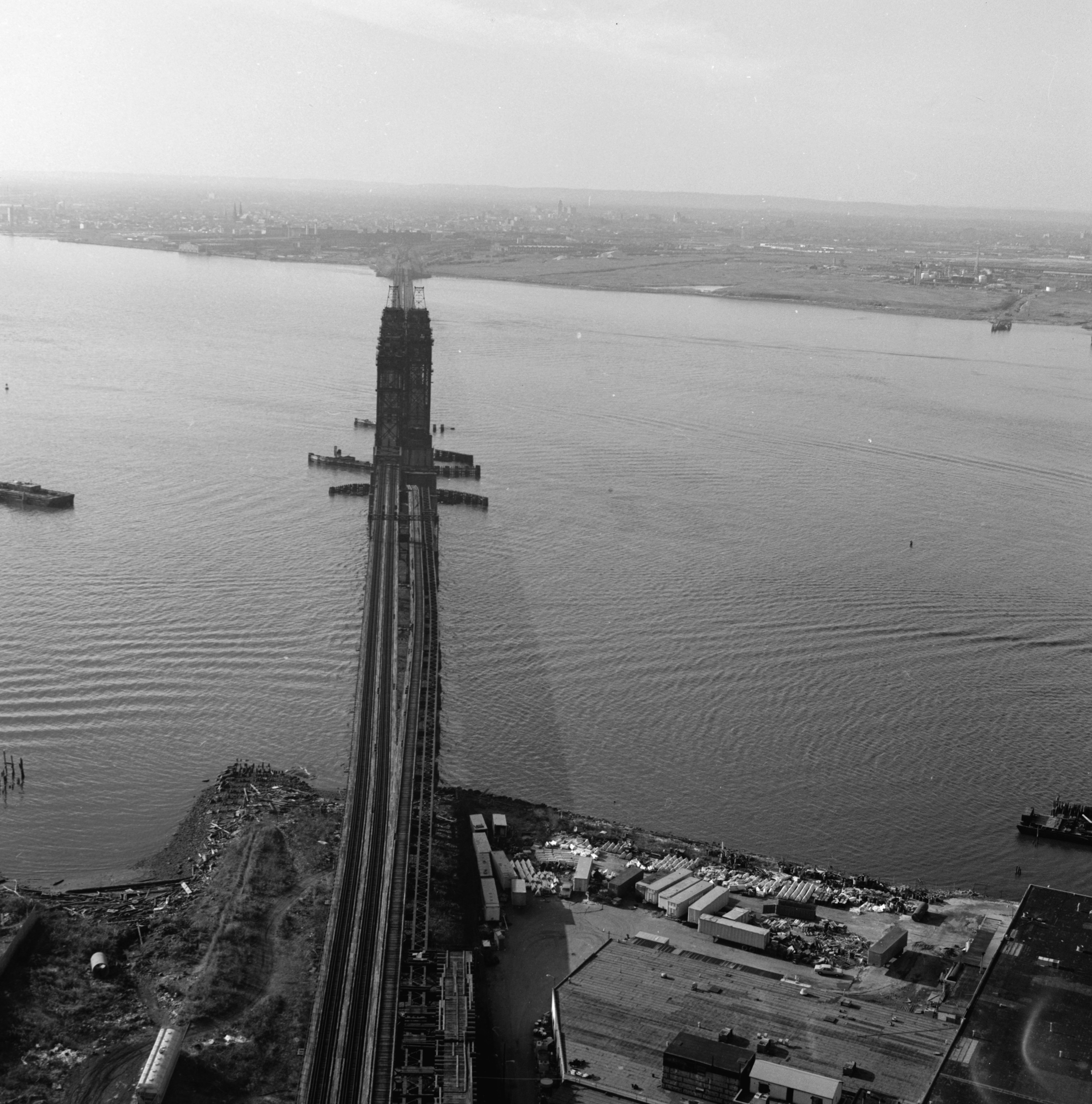 A nice aerial view of the Newark Bay Bridge, looking west from Bayonne, New Jersey. Note that only two tracks were still in place (left); the other two had been removed after a French-flagged vessel, the "S.S. Washington," collided with the northeast lift span on May 19, 1966. The structure was never repaired.

At 10:01 am Wilmurn's train passed signal #82 located west of the bridge near Bayonne, which gave an approach/proceed indication, at 41 mph. While the maximum speed over the bridge was listed at 45 mph by the railroad the signal required the engineer to slow his train to less than half of that speed, around 20 mph.

Then the train passed a stop signal less than 500 feet from the open draw still traveling over 41 mph. With a dredger passing through the open draw the train careened into the water, instantly sinking the two GP7s and commuter cars #1004 and #1100.

A third coach, #932, dangled precariously off of the bridge, submerged halfway in the water (the car eventually fell into the bay). The final two cars, coach #1062 and combine #293 stopped short of plunging into the water.

The dredger was able to avoid hitting the locomotives and cars by sheer luck when the ship's captain put the vessel into full astern and just missed the wreckage. 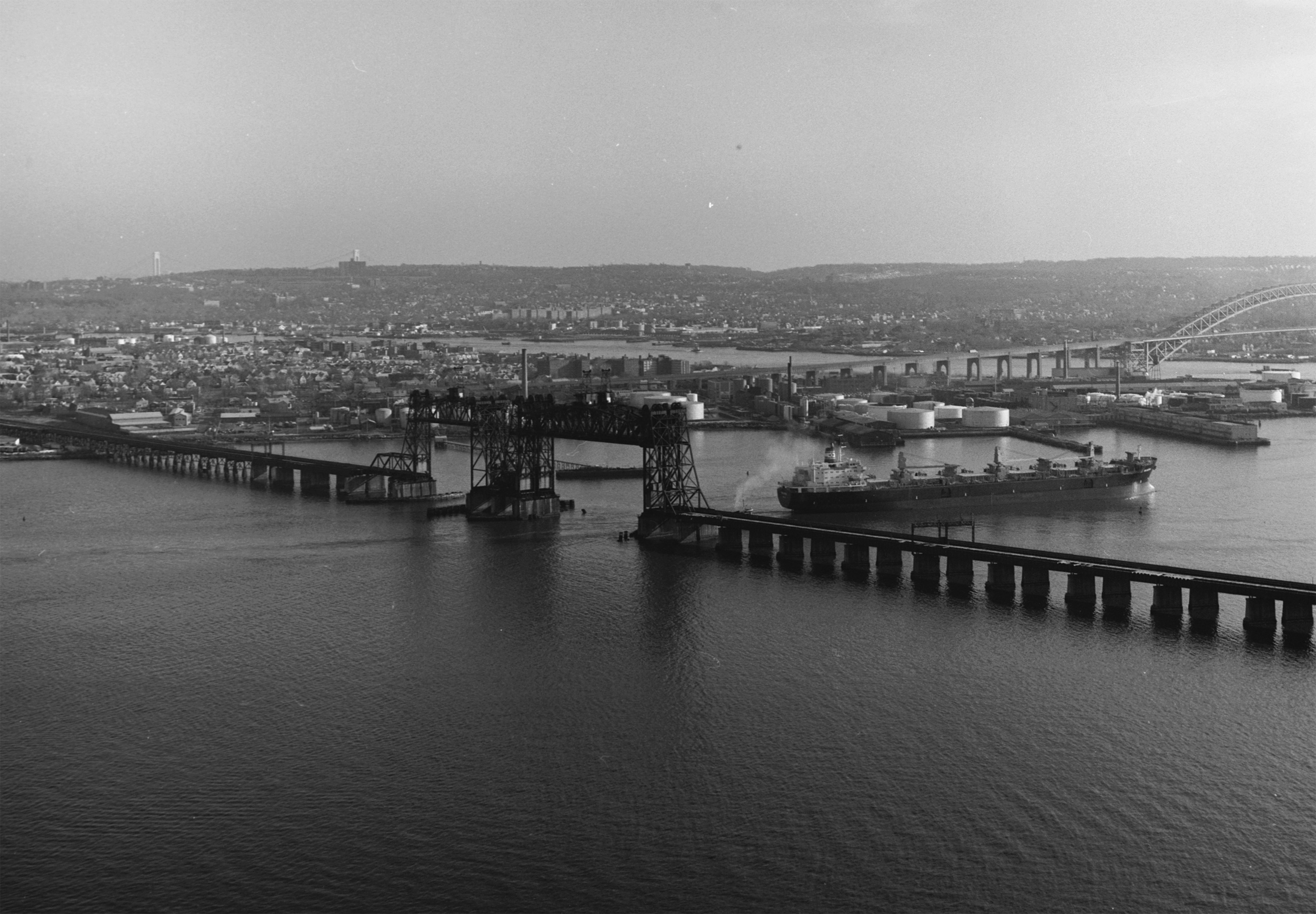 A southeastward view of the Newark Bay Bridge lift spans depicting a freighter passing through the north span (299 feet in length). Today, there is little evidence such an impressive structure ever stood at this location.

In all, 48 people were killed in the accident, including the fireman and engineer of the train. It was ruled that Wilmurn most likely had had a heart-attack while at the throttle although it could never be determined why fireman Peter Andrew never took appropriate action in stopping the train.

The wreck caused the implementation of the "dead man's switch" in locomotives. These pedals must always be depressed by the locomotive's operator or the train will automatically enter into emergency braking.

Eight years later in 1966 the Newark Bay Bridge was partially damaged when the French freighter S.S. Washington struck the northeastern lift span, heavily damaging it and knocking two tracks out of use.

While the Jersey Central had the insurance funding to repair the structure it chose not to do so on the basis of its failing financial situation along with decreasing freight and passenger traffic to and from Jersey City.

A year later on May 1, 1967 the Aldene Plan (also known as the Aldene Connection) went into effect. This project called for CNJ commuter traffic to be rerouted to Newark Penn Station and Pennsylvania Station using Lehigh Valley trackage (via a connection at Aldene), which connected with the Pennsylvania Railroad.

This allowed for the CNJ's Jersey Central Terminal to discontinue use as a commuter station by August 6, 1978 thus saving the railroad more than $1 million annually. Up until that deadline the famed Bayonne to Cranford shuttle known as the "Scoot" continued to serve the terminal using Budd-built RDCs (Rail Diesel Cars). 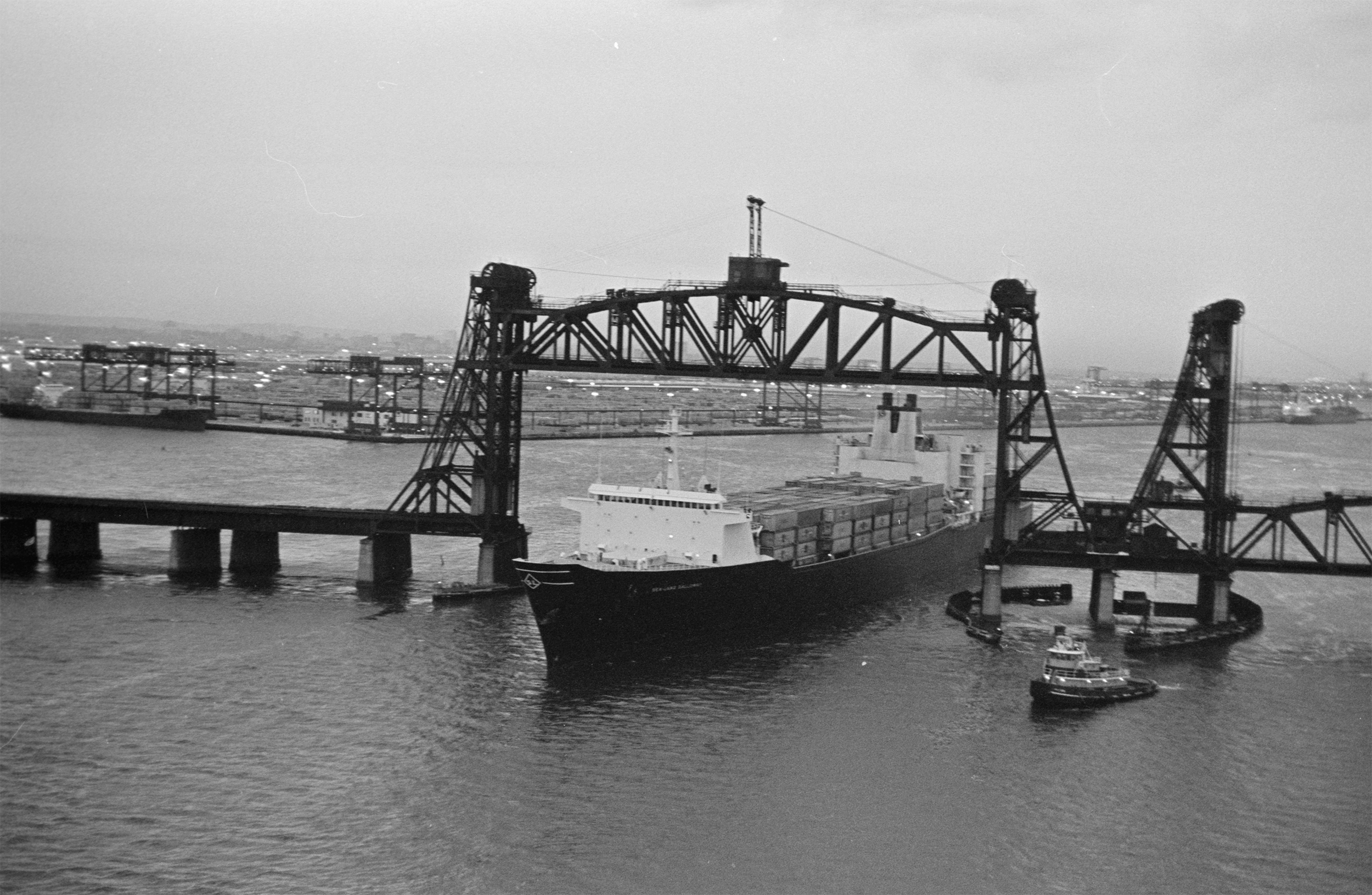 In this scene, looking to the northwest, the "S.S. Sealand Galloway" passing through the longer northern span (the shorter, southern span is 210.75 feet in length).

With freight trains having stopped crossing the Newark Bay Bridge with the creation of Conrail in 1976 the end for the structure was near.

No longer in use by 1980 the US Coast Guard deemed the bridge a navigational hazard to ships and almost without warning razed the draws in July of that year, despite the best efforts from the city of Newark to save its impressive structure.

With the draws gone it was only a matter of time before the approaches were likewise demolished, which occurred in 1987 and 1988. Today, redevelopment has all but reclaimed the rights-of-way leading up to the bridge and the only remains of the mighty Newark Bay Bridge are a few concrete and stone supports.

The loss of the bridge has remained controversial to this very day. Many were critical of the Aldene Plan, which caused the Jersey City Terminal to be abandoned itself, along with the US Coast Guard who wasted no time demolishing part of the structure despite efforts to see it saved.

There were also calls to have the state of New Jersey continue on commuter operations to the terminal in hopes of preserving the infrastructure, particularly in the event of increased future use (remember that this was prior to the creation of NJ Transit and other state commuter agencies). 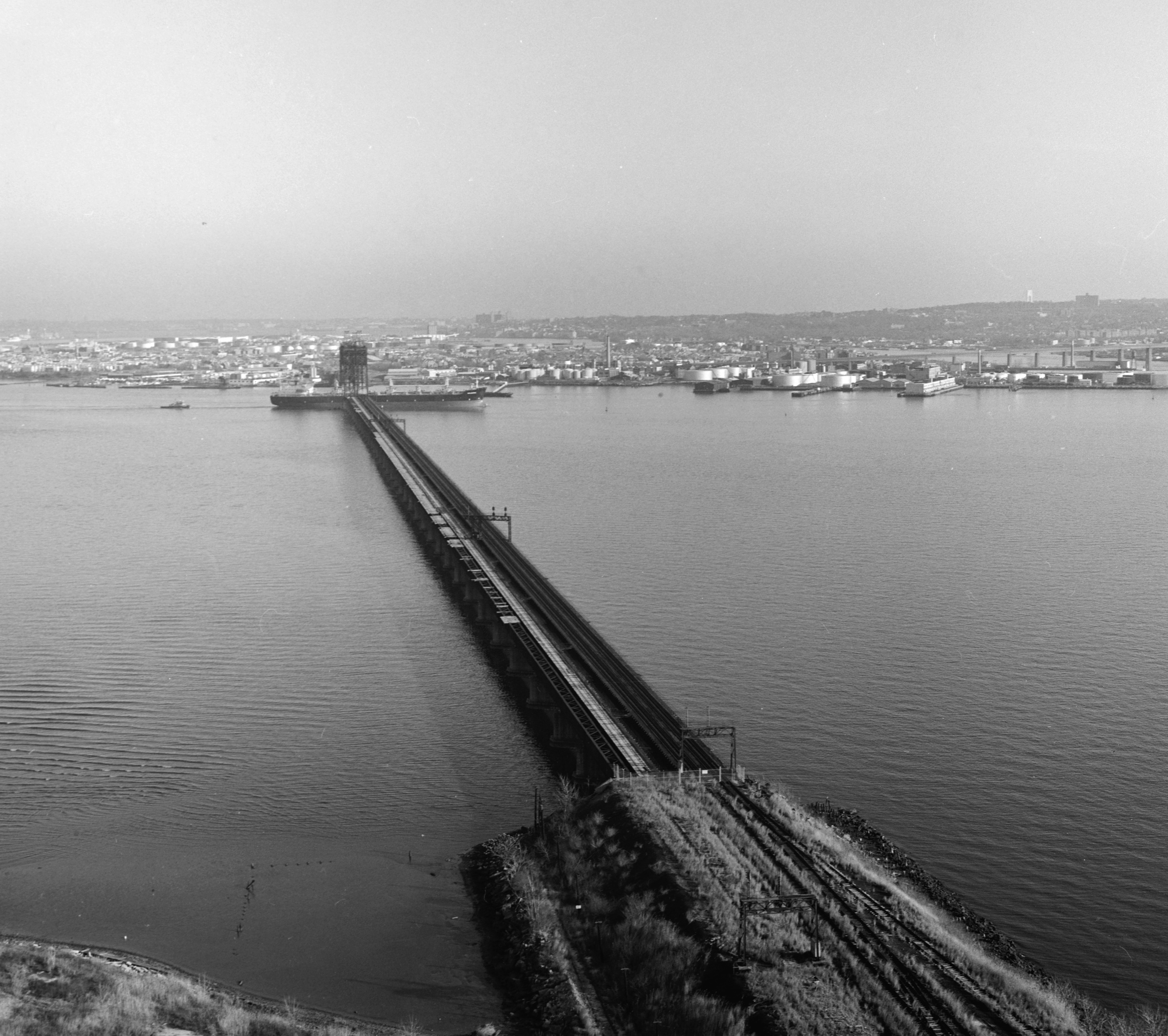 An easterly view looking roughly down the right-of-way. All of the above photos were taken by the Historic American Engineering Record (HAER) and are preserved at the Library of Congress.

Ironically, today, the bridge and terminal would make for an ideal commuter system, likely part of NJ Transit, as highways become increasingly crowded and folks have begun turning to mass transit to get to and from their places of employment.

However, it is easy to see why the bridge was lost once one understands that the state of New Jersey, particularly during the second half of the 20th century scoffed at the CNJ and railroads in general which operated within its borders, relentlessly taxing them. As for the CNJ, this was especially crippling considering much of its trackage was located within the state.