The Norfolk, Franklin & Danville Railway is best remembered for its interesting fleet of American Locomotive Company (Alco) diesels. However, the NF&D was only a 1962 product created after parent Norfolk & Western took over the property and renamed it.

Prior to that the road had always been known as the Atlantic & Danville Railway, a long-time property leased by the Southern Railway that operated more than 270 miles of track from its namesake city of Danville to the east coast at Norfolk/Portsmouth.

While the A&D offered the most direct route between these two points, the former being a one-time major industrial center and the latter an important port, it was surrounded by much larger giants that served roughly the same region; the aforementioned N&W and Southern.

After its takeover by the N&W the NF&D continued operating as a separate railroad until it was dissolved following the formation of the new Norfolk Southern Railway in 1982. 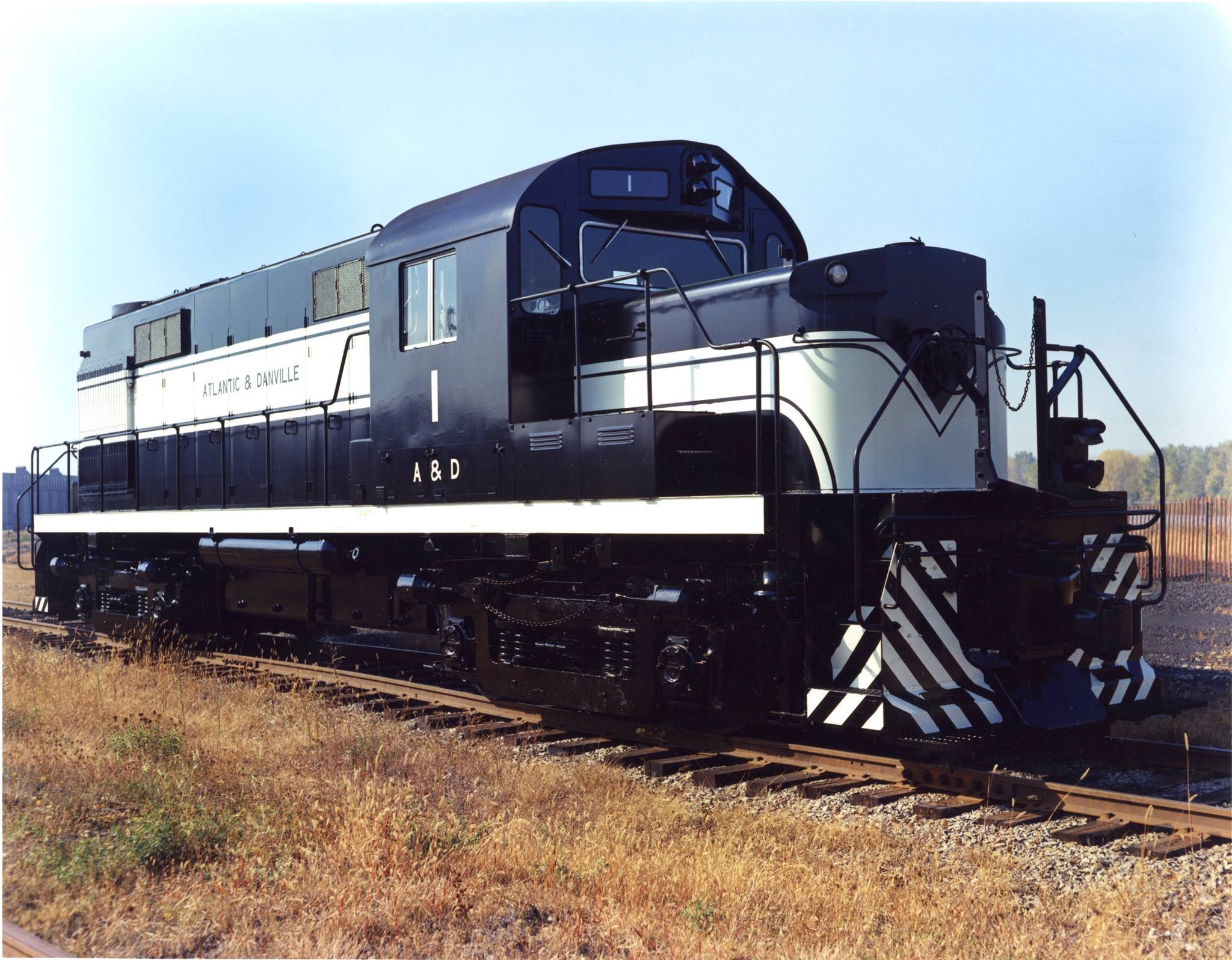 To understand the operations of the Norfolk, Franklin & Danville, a system that was only in service for two decades, an overview of its history is important.

The property dates well back to the 1880s when the Atlantic & Danville was incorporated in September of 1883 initially to complete a three-foot, narrow-gauge route from what would become the port of Claremont, Virginia (incorporated in 1886), which lay along the James River, southwestward to Emporia.

Here the A&D completed a connection with the early Atlantic Coast Line, which owned a north-south main line from Richmond to Charleston, South Carolina (at the time the new ACL was a holding company for several smaller lines that formed the route).

In all the railroad was about 50 miles in length and believed Claremont would become an important center of trade and commerce.

Unfortunately, it soon became clear that the Norfolk/Portsmouth/Hampton Roads region to the south was the port of choice with its closer proximity to the open Atlantic Ocean and a natural harbor leading into the Chesapeake Bay.

So, the A&D's owners set out to build a 78-mile extension eastward from Emporia towards Norfolk although decided to construct the line to standard gauge to afford better interchange with neighboring lines.

This proved crucial around Norfolk where it connected with several notable systems such as the Seaboard Air Line, ACL, N&W, Southern (via trackage rights), Virginian, Chesapeake & Ohio, Norfolk & Portsmouth Belt Line, and the Pennsylvania.

During the 1890s the A&D struck out westward, completing the 133-mile extension to its namesake city of Danville. 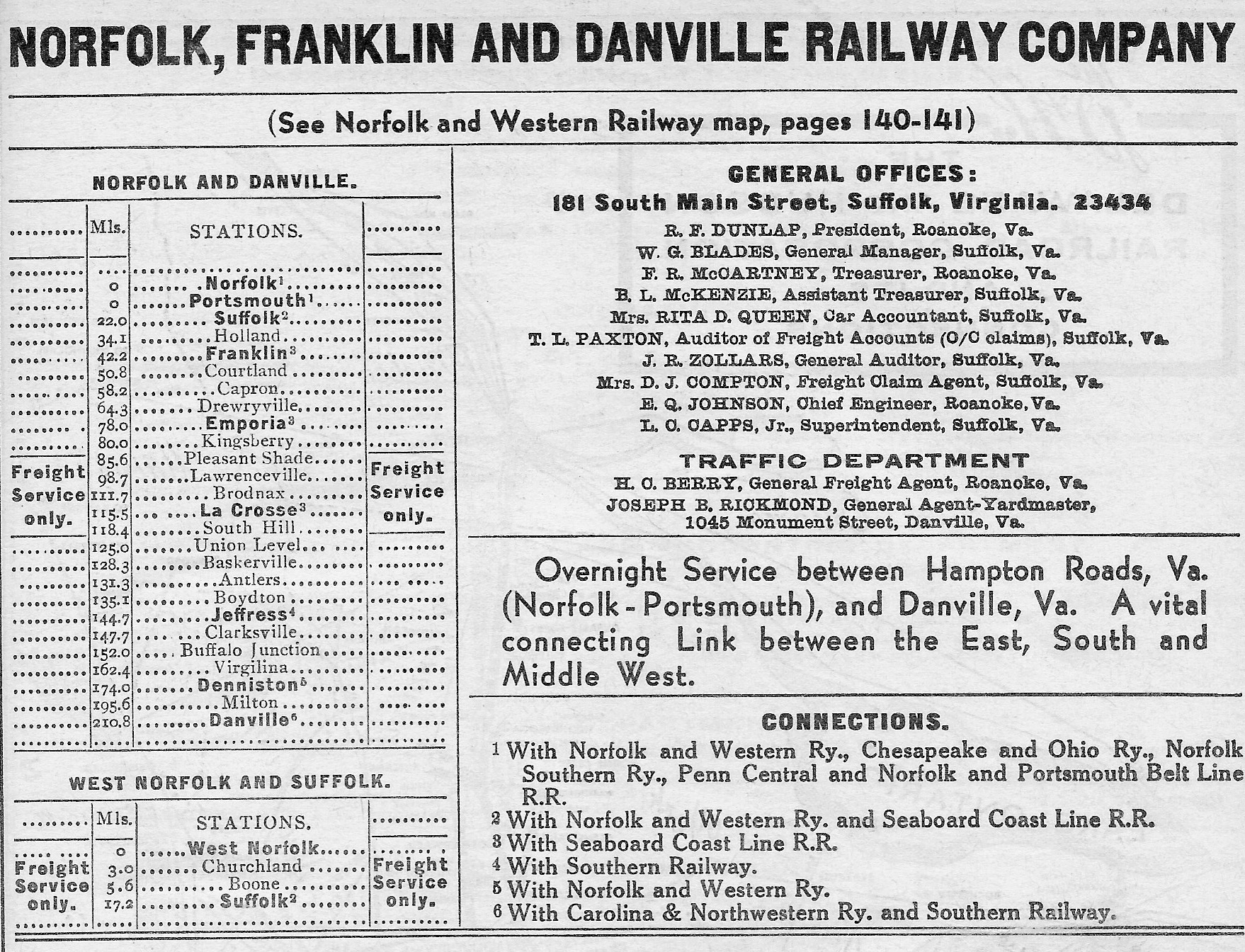 It's total system stretched roughly 278 miles; 210.8 main line miles between Norfolk and Danville, its 50-mile original route between Claremont and Emporia (which became a branch), and finally a short 17.2 mile branch between West Norfolk and Suffolk. Major terminals for the line included Danville and Lawrenceville (at about the half-way point).

In September, 1899 after less than 20 years of service the Atlantic & Danville was leased by the growing Southern Railway system.

The Southern already reached Danville, its main line north to Richmond passed directly through the city. However, by leasing the A&D the railroad gained a direct route to Norfolk and since Danville was a booming industrial center it made good business sense.

Additionally, not only did the railroad interchange with the Class Is at Norfolk but its east-west main line also intersected with the ACL/SAL (Franklin, Emporia, La Crosse), Southern (Jeffress), and N&W (Suffolk, Denniston).

Finally, interchange service was provided with the smaller Carolina & Northwestern Railway at Danville.  During the 1930s the only remaining use of the narrow-gauge Claremont Branch was for sparse lumber movements and general freight; as a result it was abandoned.

The lingering depression of the decade and growing competition from trucks began carving considerable inroads into the A&D's traffic base (which not only included the Danville market but also the movement of peanuts, a major crop of Virginia, for shipment at Norfolk).

Things became so bad that after lease payments, the Southern was no longer earning a profit. Losing interest in the property it opted for the decision of trackage rights over the ACL instead between Selma, North Carolina and Norfolk. This routing was a bit longer, 314 miles compared to 207, but proved a cheaper alternative. 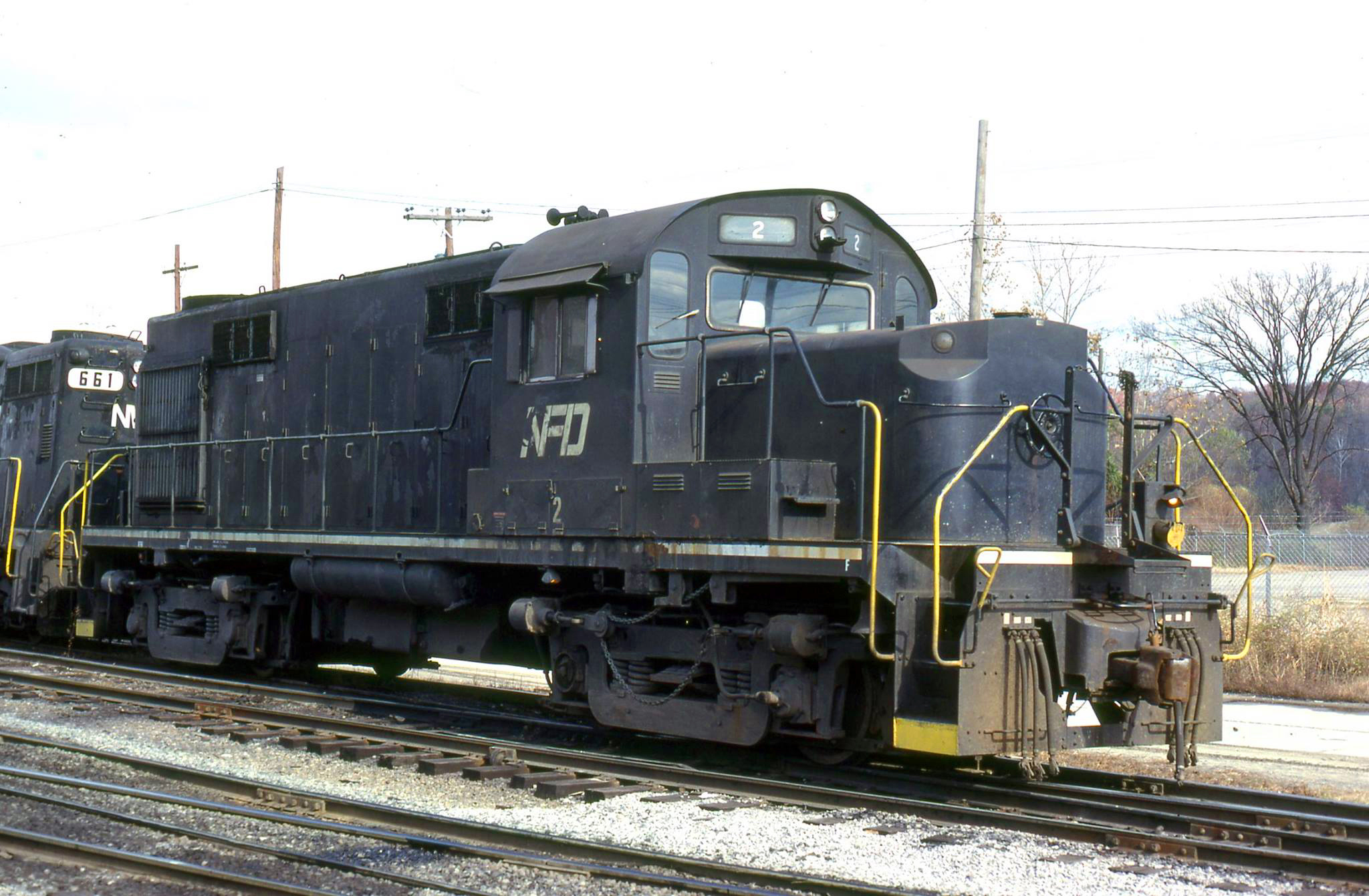 During the summer of 1949 the A&D's trustees were informed by the Southern that as of August 1 the railroad would again be independent and operating on its own.

This left officials scrambling to find motive power and employees. They purchased six new, 1,500 horsepower Alco RS2s later that year, #101-#106, although the units did not arrive until the fall forcing the A&D to lease Southern diesels for the time being (the railroad later added RS3 #107). 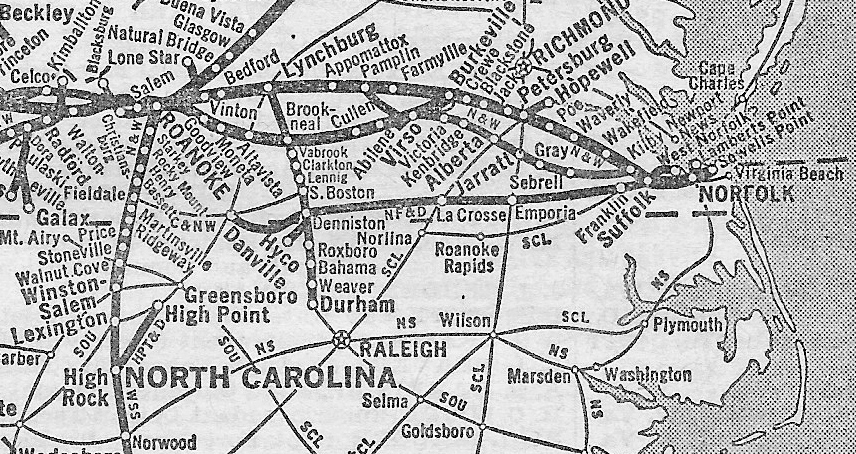 A 1969 system map of the Norfolk, Franklin & Danville which was included within the Norfolk & Western's network. Author's collection.

When the road-switchers finally arrived they sported a simple but classy black livery with white stripes and the railroad's emblem adorning the end of the long hood. Within its first five months of service the railroad saw a net loss of $73,482. 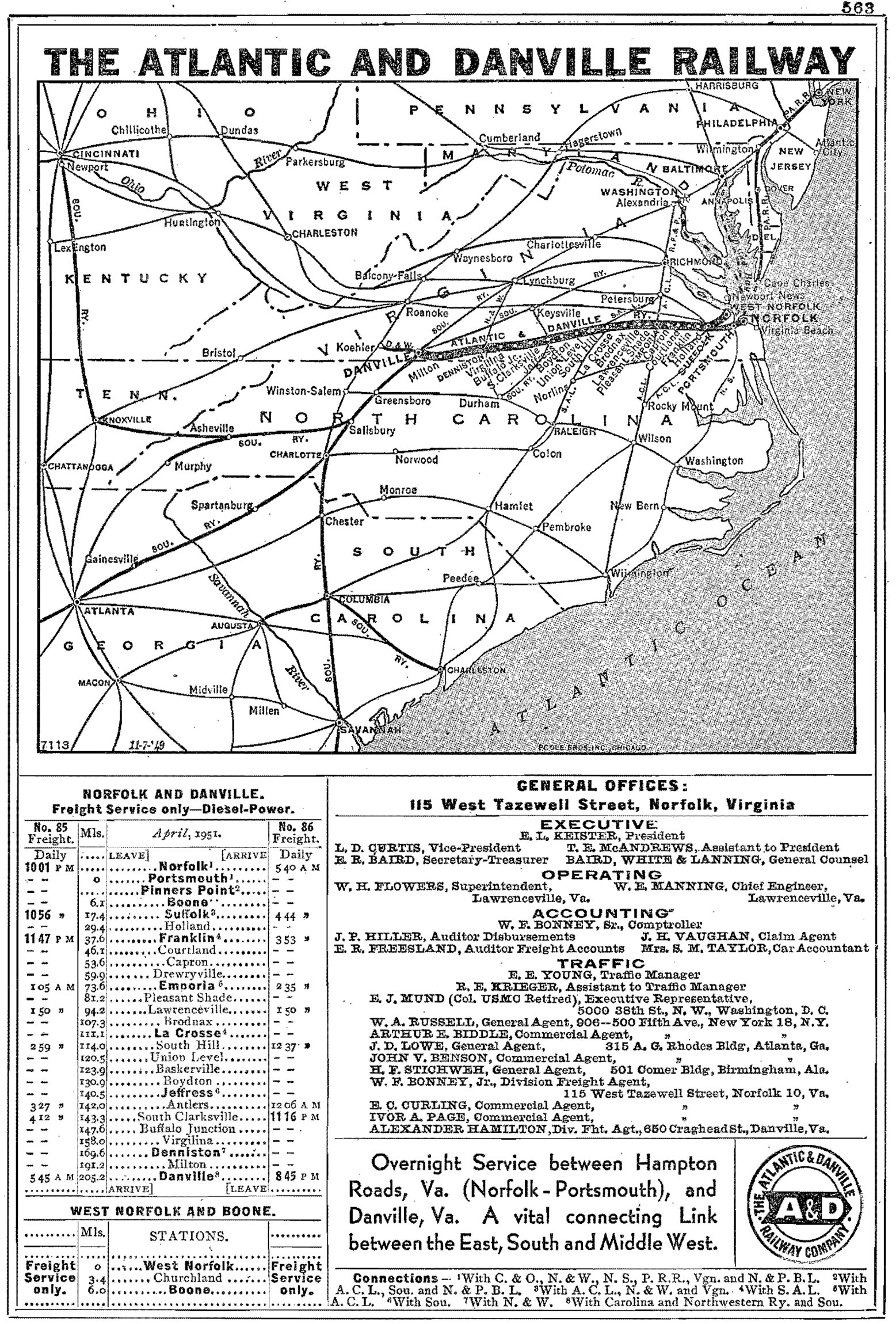 The A&D operated independently for just 13 years until it attracted the attention of its other large neighbor, the N&W, which purchased the line in 1962 and renamed it as the NF&D.

Interestingly, the N&W already served Norfolk via its main line but apparently was after the industrial base concentrated around Danville.  Following the N&W takeover the railroad traded in its RS2s and RS3 to Alco for new power including new RS36s #1 and #2. Additionally, it picked up four, former Nickel Plate Road RS11s, #201-204.

A simplified paint scheme adorned the locomotives and included a basic dark blue with "NFD" listed under the cab windows. Along with its own power, the railroad leased N&W units when the need arose.

(A big thanks to Louis D. Rubin, Jr.'s article "A&D: Southern waif" from the December, 1950 issue of Trains as a primary reference for this page.) 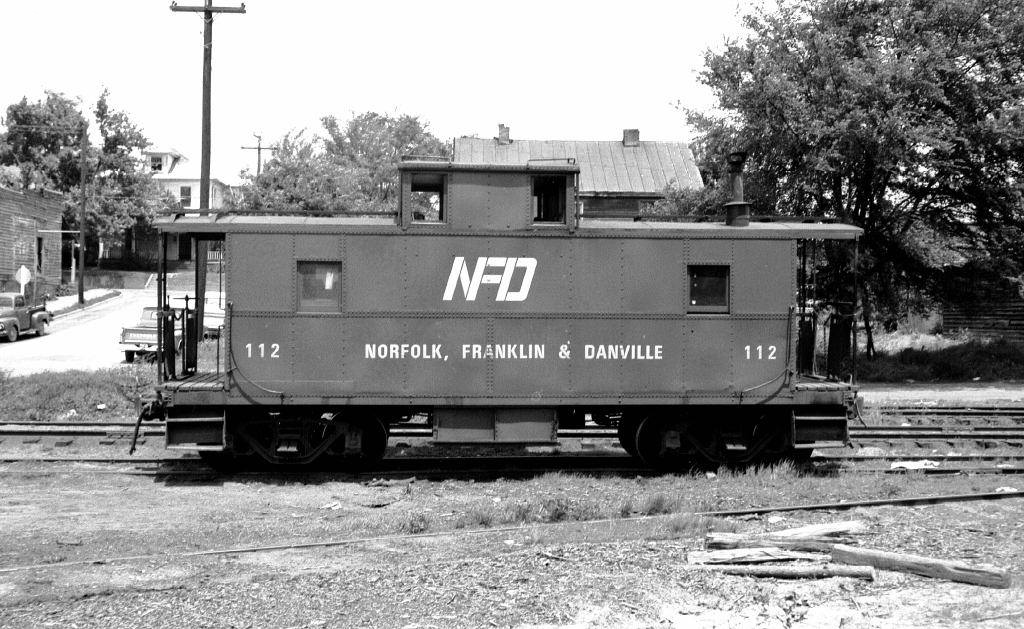 Alcos were not the only reason fans came to enjoy watching the NF&D's operations; its bucolic line passed through small towns, rolling hills, and country farms making for incredibly photogenic opportunities.

After the 1982 merger of the Norfolk Southern the new company began consolidating all of its subsidiaries, which included the Norfolk, Franklin and Danville Railway, which was dissolved in 1983.   Today, portions of the line remain in use but many sections have also been abandoned.

What does remain under NS control is little more than branches. Of note, the 17.2-mile spur from West Norfolk to Suffolk is still used, owned by short line Commonwealth Railway, a Genesee & Wyoming property.