At one time the Granite State was home to such fabled Northeastern railroads as the Maine Central (whose famous "Mountain Division" passed through the Northern Panhandle to St. Johnsbury, Vermont) and Boston & Maine.

Today, both roads are gone, swallowed up into Pan Am Railways (now a component of CSX Transportation).

Currently, New Hampshire's railroads include one Class I (CSX Transportation) and a handful of short lines.

Historically, the state has never boasted more than 1,000 miles of rails.

Unfortunately, like the rest of New England, New Hampshire has lost a great deal of its infrastructure to abandonment (more than 70%).   The graph below illustrates this great loss.

There were simply too many railroads constructed in the 19th century within this region.  They served a concentrated region which could not support so many corridors once manufacturing and other business disappeared.

While today, the state may only operate a few hundred miles of track it continues to offer some spectacular views of New England railroads at their finest. 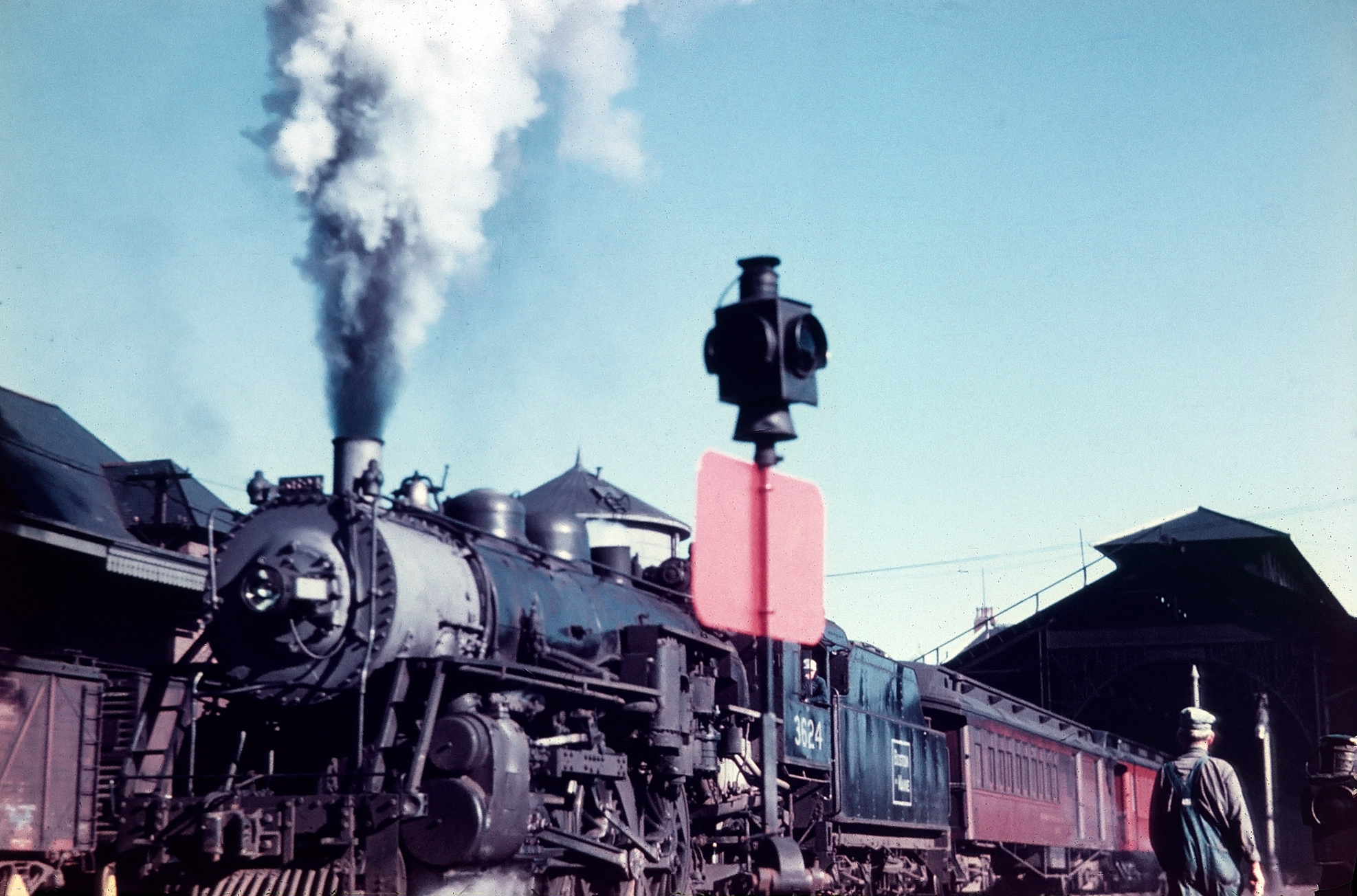 Boston & Maine 4-6-2 #3624 steams out of the massive train shed at Concord, New Hampshire with a southbound passenger consist, circa 1950. American-Rails.com collection.

New Hampshire's trains date back to 1835 when the Nashua & Lowell Railroad was chartered.

The N&L was built to continue a line north from Lowell, where a connection with the Boston & Lowell Railroad was obtained (this company dated back to June of 1830, and was a predecessor to the much better known Boston & Maine Railroad), to Nashua.

The B&L would grow to become a rather large railroad for its time serving Boston, eastern Massachusetts, and into New Hampshire.

New Hampshire's location in the heart of northern New England meant it was served primarily by the Boston & Maine Railroad throughout much of the 20th century.

However, prior to the B&M's creation and subsequent acquisition of many smaller roads in the region, New Hampshire was homes to names like the:


To the north, Maine Central's Mountain Division cut across New Hampshire at Intervale, Bartlett, and Fabyans to St. Johnsbury, Vermont.  Technically, this line is not abandoned but has been out-of-service since the early 1980's.

As for the Boston & Maine, its line crisscrossed central and northern New England from Massachusetts to Portland, Maine.

The B&M had a great deal of excessive, redundant trackage, in some cases by the early 1900's as manufacturing in the region began to play out.

In addition, the Worcester, Nashua & Portland, along with the Eastern Railroad, offered second, third, routes from Massachusetts, to Portland.

As early as 1932, sections of the old WN&P were removed, and parts of the Eastern Railroad followed over the next decade.

Today, most of both routes are now gone.  You can also find a great deal of other old B&M lines removed throughout southern New Hampshire.  Many were let go following the Guilford takeover in the early 1980's.

In any event, three years after it was created the N&L completed its main line between its namesake cities. By 1860 the B&L and N&L began to merger operations and after 1880 the latter became a full subsidiary of the former.

Following the creation of the Nashua & Lowell, New Hampshire would find a handful of New England's best remembered railroads operating lines across its borders. 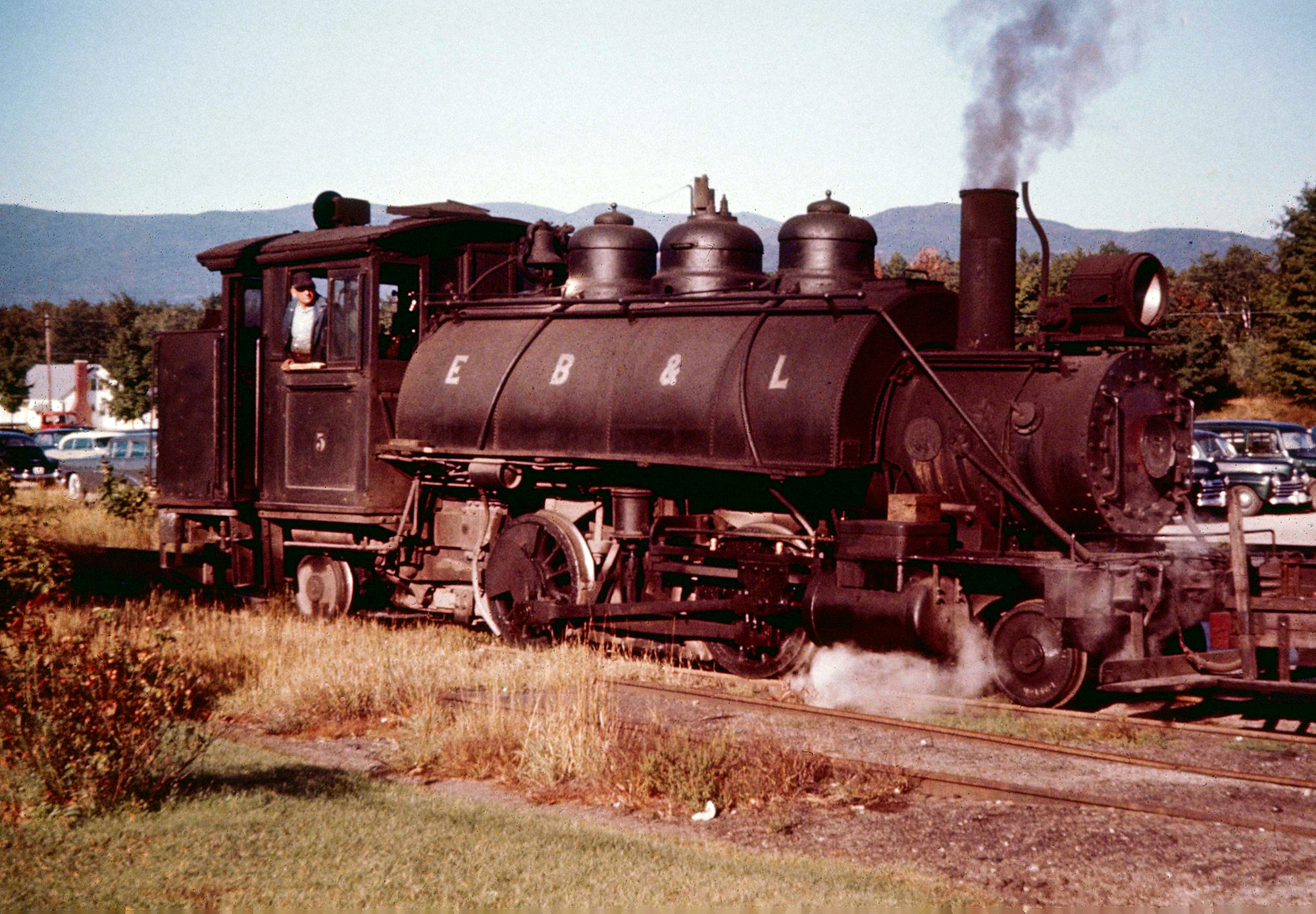 The Boston & Maine became New Hampshire's largest provider of rail service, operating all through the state from Berlin in the north to Dover and Portsmouth along the coast.

Virtually all of the state's largest and most significant towns and cities were served by the B&M.

Today the B&M is still officially on the books (the oldest railroad still on paper in North America), although it survives now mostly in name only.

It persisted on paper under Pan Am Railways until the large regional became a component of CSX Transportation in 2020/2021.

Of course, the B&M has not been an independently operated entity long before it was handed over to Pan Am.

In 1983 the railroad was purchased by the Guilford Transportation Industries owned by Timothy Mellon and remained so until Guilford became Pan Am Railways in early 2006.

In total, New Hampshire railroads operate a little over 400 miles of trackage today although at one time the state was home to over 1,200 miles (the state also currently owns some 300 miles of railbanked right-of-way).

While the state has never held a significant amount of rail infrastructure it has nevertheless been hit hard by abandonments and cutbacks. 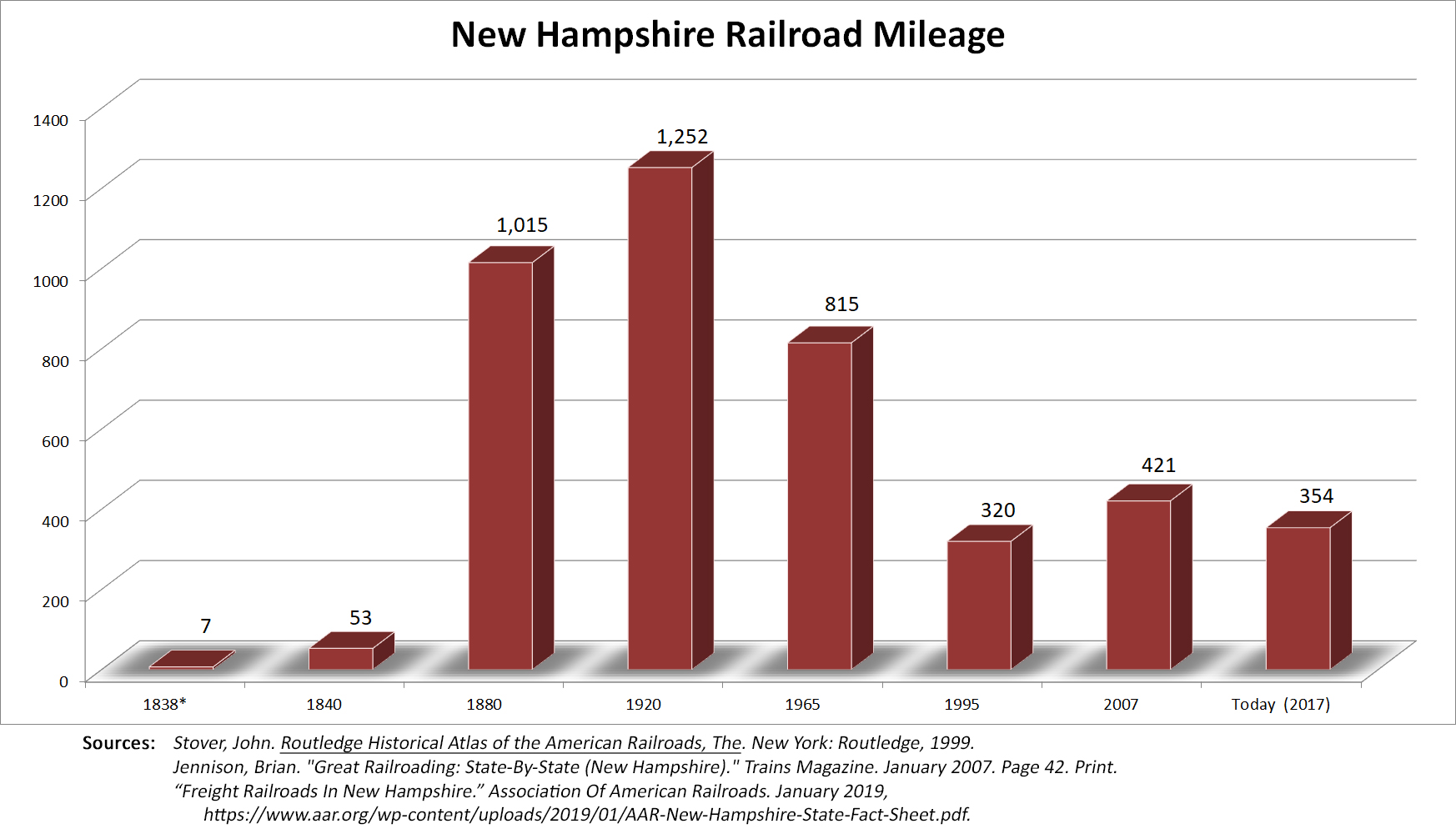 * Railroads in America trace their genesis to the New England region.  As a result, New Hampshire was one of the initial states to its arrival.  Its first was the Nashua & Lowell Railroad (N&L), chartered in New Hampshire on June 26, 1835 to connect with the Boston & Lowell at Lowell, Massachusetts and extend northwesterly along the Merrimack River to Nashua, New Hampshire.  Its promoters' vision was to see a through route eventually open from the eastern seaboard to the Great Lakes.  While this would not materialize the N&L was completed in late 1838 and eventually wound up as part of the modern Boston & Maine.

Since the 1920s when mileage peaked in the state (and around the country), New Hampshire has seen its rails decline by more than 67% (the average for most states is around 45%-50%).

For more information on New Hampshire, in terms of route mileage over the years please refer to the chart above. 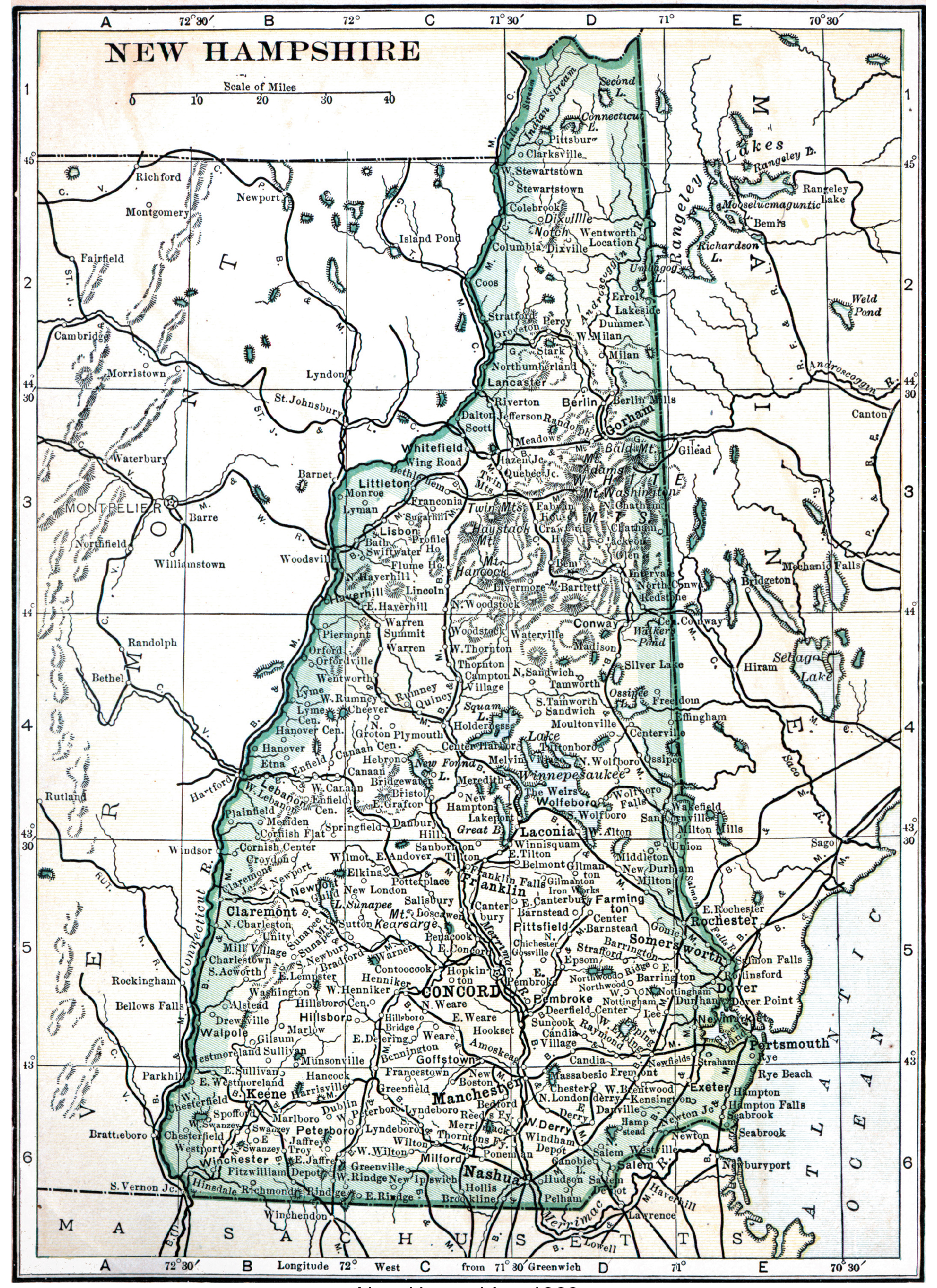 While New Hampshire has never been known for famous passenger trains like the Super Chief or 20th Century Limited there have been trains like the B&M's Day White Mountains and Maine Central's Mountaineer operated in the Granite State. 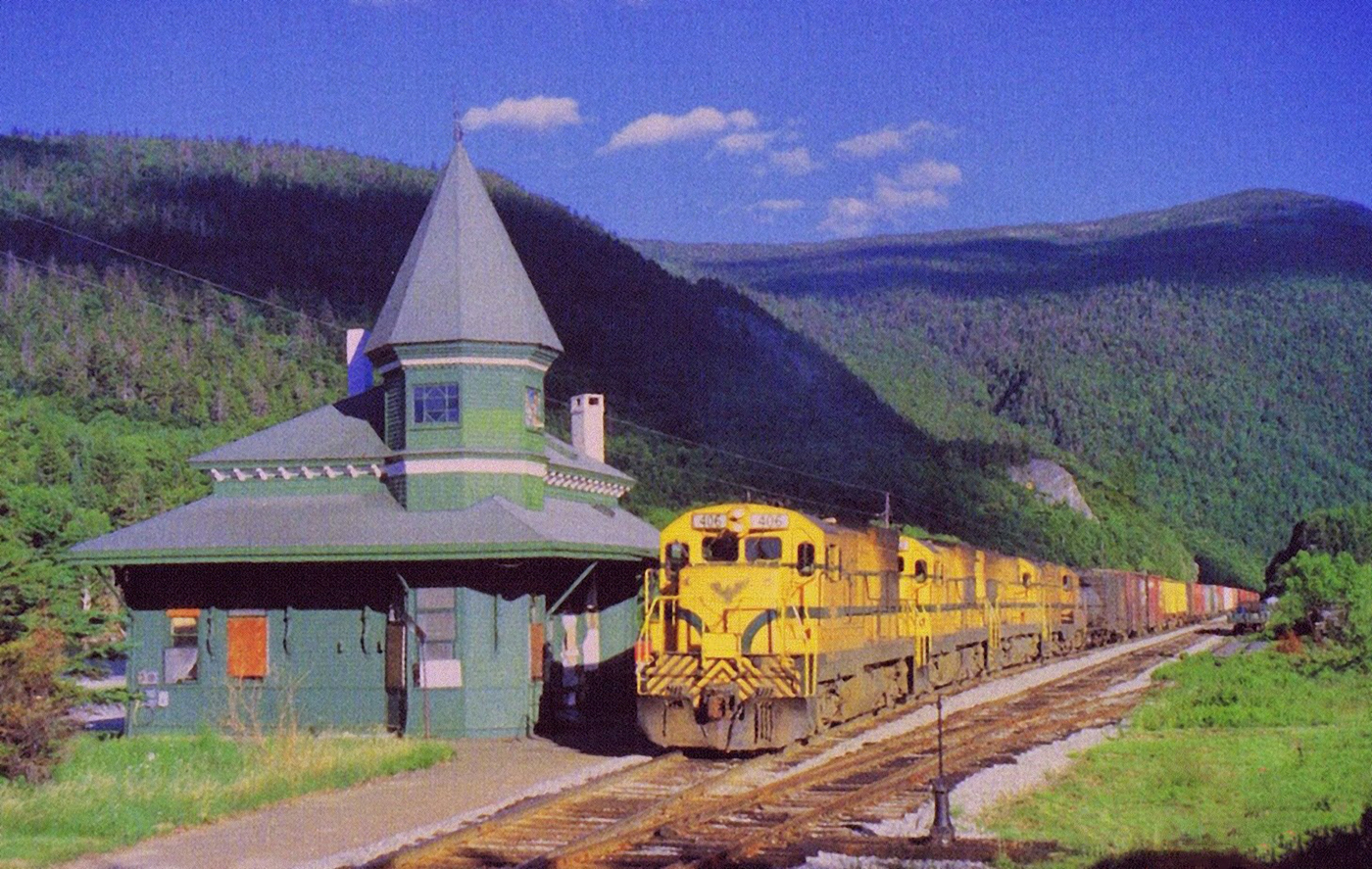 Aside from passenger and freight trains you may want to also ride one of the state's tourist railroads that can take you through the breathtaking New England countryside or through New Hampshire's gorgeous White Mountains, like on the White Mountain Central Railroad.

If, however, you're not into excursion trains be sure and visit one of the state's railroad museums like the Sandown Historical Society and Museum.

All in all, whether it is a ride up Mount Washington or watching the Pan Am Railway serve the state's coastal regions, New Hampshire railroads are most definitely an interesting and unique experience that will not be forgotten!