Nevada Railroads In "The Silver State"

Nevada may be quite rural and isolated in most locations but they does offer several jewels, not to mention that it serves a key link in the Union Pacific's massive system (in the way of the former Southern Pacific's and Western Pacific's main lines).

Historically, Nevada is recognized as the western component of the transcontinental railroad when the Central Pacific blazed across the northern desert in 1868 and early 1869 as it worked to reach the Union Pacific.

The two finally met at Promontory Summit, Utah on that fateful day on May 10, 1869.

The Silver State is also home to the historic Nevada Northern Railway (a virtually untouched excursion operation from the 19th century!) and the fabled Virginia & Truckee Railway which has been entirely rebuilt, along with help from the State of Nevada.

Nevada has never been home to either a large number of railroads or overall mileage.

That holds true even today as Union Pacific serves nearly all of the state's rail interests with BNSF Railway being the only other system with a presence (via UP trackage rights). You may note that there are links listed throughout the article here.

These will take you to other pages here at the site related to Nevada railroads and are included here simply for your interest. 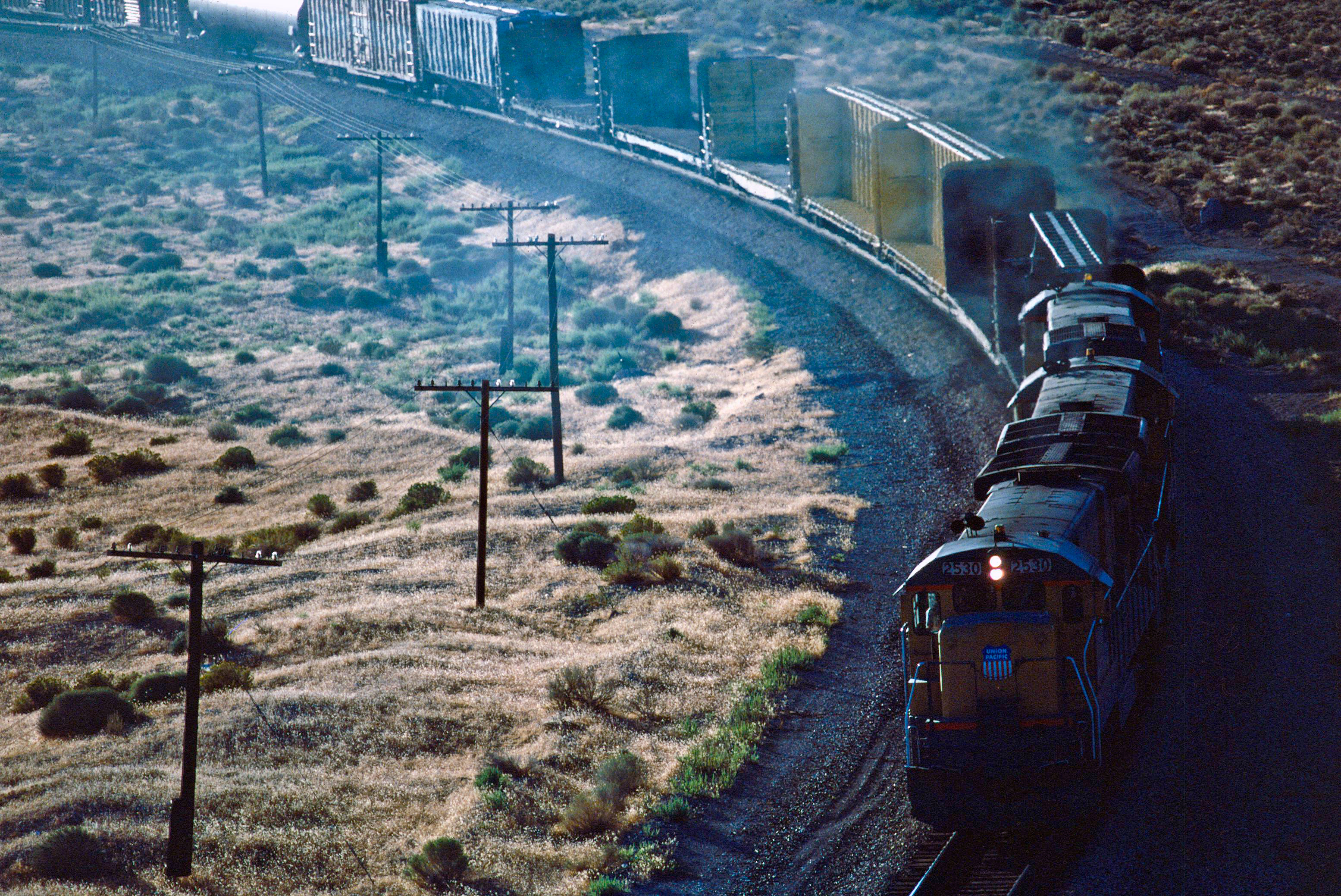 Nevada's rail history dates back to 1868 when the Central Pacific Railroad reached the state building east from Sacramento, California.

The CP, of course, was a product of the Pacific Railroad Act of 1862, signed into law by President Abraham Lincoln, which sought to construct a Transcontinental Railroad.

Nevada has always been a state featuring through routes and few branch lines.  The Southern Pacific (Central Pacific), Union Pacific, and Western Pacific all maintained key corridors across Nevada.

As a result, there has not been considerable loss to its rail network, aside from largely secondary Southern Pacific corridors.

One particularly notable removal, albeit is actually just bypass efforts, is the original Central Pacific grade to Ogden, Utah.

Over the years successor Southern Pacific has improved this routing by straightening curves and reducing grades.  Similar efforts were carried out on Donner Pass in California.

One especially noteworthy abandonment of a standard-gauged line is the Tonopah & Tidewater Railroad.

This system ran from a connection with the Santa Fe at Ludlow, California to Goldfield, Nevada.

It was built largely to handle borax and notable for being built across the Death Valley region.  All operations ceased in 1940 and rails were removed in 1943 for the war effort.

There is also the fabled Virginia & Truckee, "Queen Of The Short Lines."  The road was constructed just after the Civil War to handle the legendary "Comstock Lode" of silver ore.

After this traffic began slowly playing out in the latter 19th century the railroad subsisted on whatever means of local freight it could generate.

These efforts grew further when the state of Nevada became involved in the 1990's.  The many years of dedication finally paid off when the segment from Gold Hill to Carson City reopened in 2009 as a tourist attraction.

Less known is Nevada's once-extensive narrow-gauge network, which also primarily handled the silver industry of the 19th century.  These system included the:


The C&C went on to become part of Southern Pacific's system while the rest were all abandoned before World War II.  Some did not even survive to see the 20th century.

The CP would be the western railroad building east while the Union Pacific headed west from Omaha, Nebraska. As many know, of course, the two railroads met at Promontory Point, Utah completing the line on May 10, 1869.

The CP would soon after become part of the Southern Pacific system. In the proceeding years the Silver State would be home to a number of celebrated western railroads.

While Nevada is historically remembered by the operations of the UP and SP the much smaller Western Pacific also had a considerable presence through the state with its Salt Lake City-Sacramento/Bay Area main line traveling through the northern region of Nevada (it also had a branch extending to Reno).

Today, Nevada railroads are almost exclusively the realm of Union Pacific (although BNSF does continue to have a presence in the way of trackage rights across the state). There is currently only one other freight railroads operating in the state, the privately owned Nevada Industrial Switch.

This company operates a former UP branch, beginning operations in the mid-1990s and serves the Pabco Gypsum Mine which produces standard sheets of drywall. 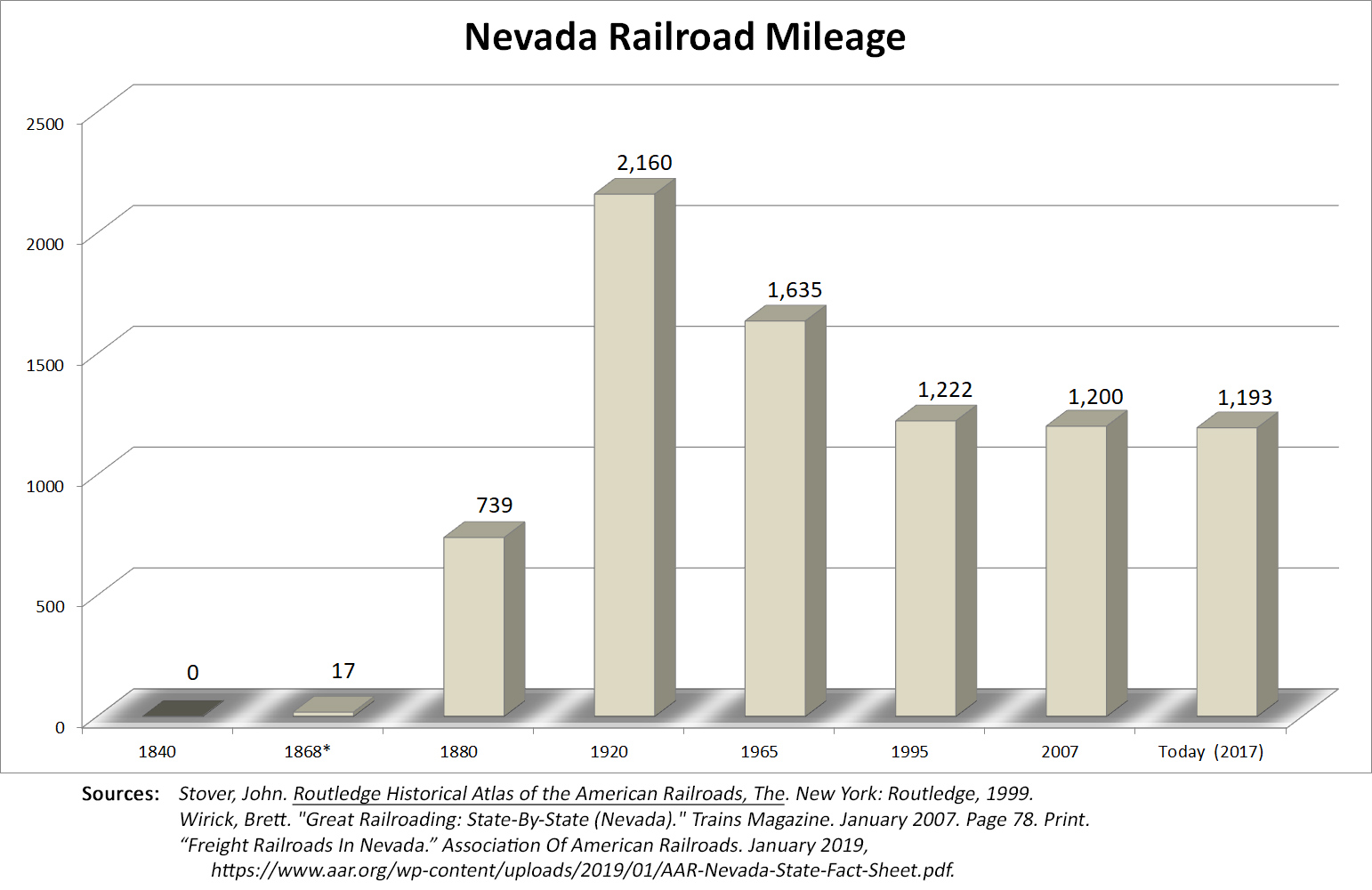 * The iron horse arrived in Nevada with the coming of the Transcontinental Railroad; specifically, the Central Pacific Railroad.  Building east from Sacramento, California, the CPRR arrived in Reno, Nevada on June 18, 1868.

While passenger trains like the California Zephyr and City of San Francisco are no longer operated by their original creators, the CZ remains under the Amtrak banner with stops in Elko, Winnemucca, Sparks and Reno.

Today, there are about 1,200 miles of rails currently active and in some state of use in Nevada. During the industry's heyday of the 1920s (when mileage peaked in the country) Nevada was home to nearly 2,200 miles of rails. 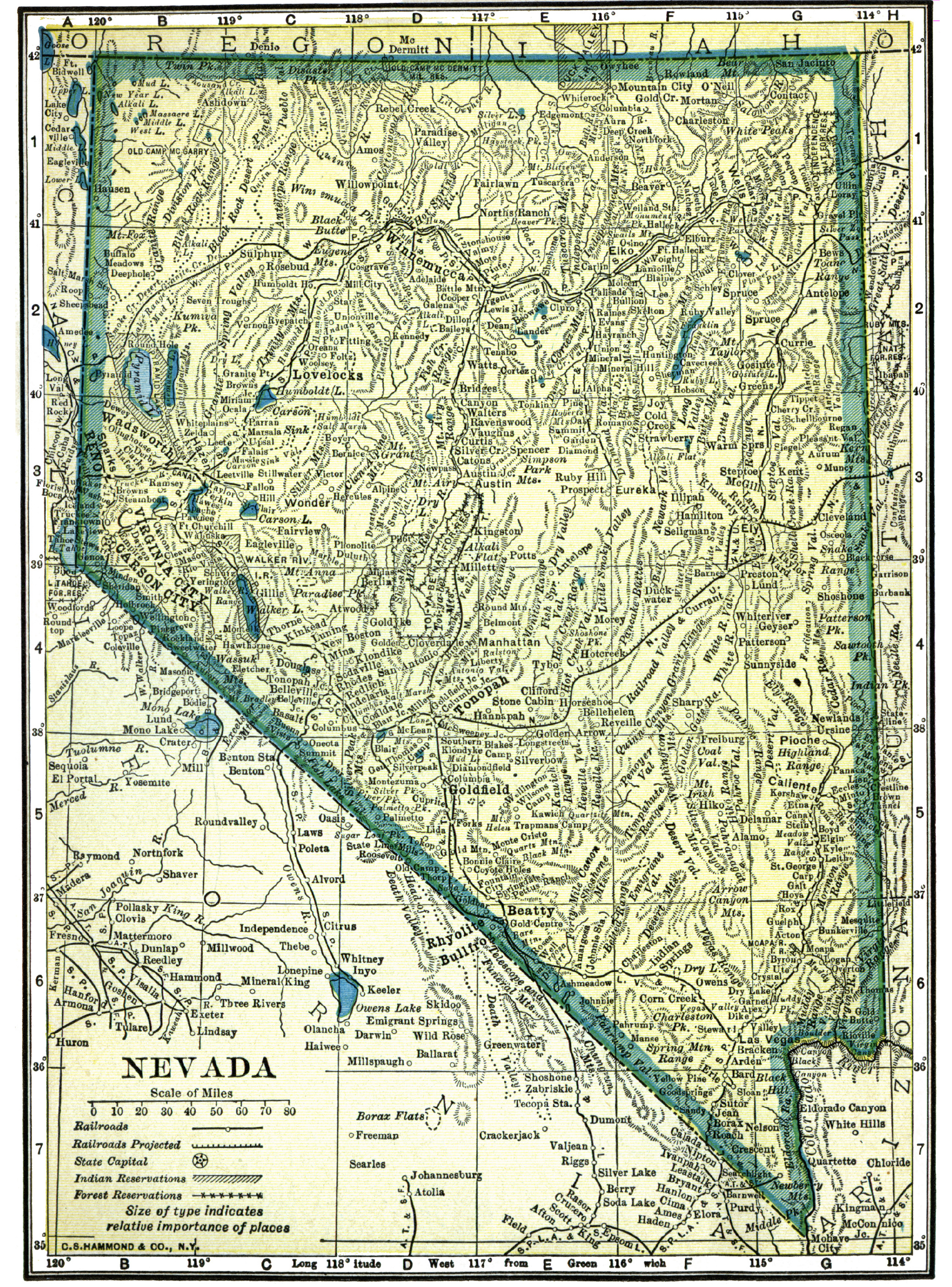 Since that time the state has lost about 45% of its railroad infrastructure, which is on par with what most other states have experienced during that time.

In any event, for a more in-depth look at Nevada, in terms of rail mileage over the years please have a look at the chart above. 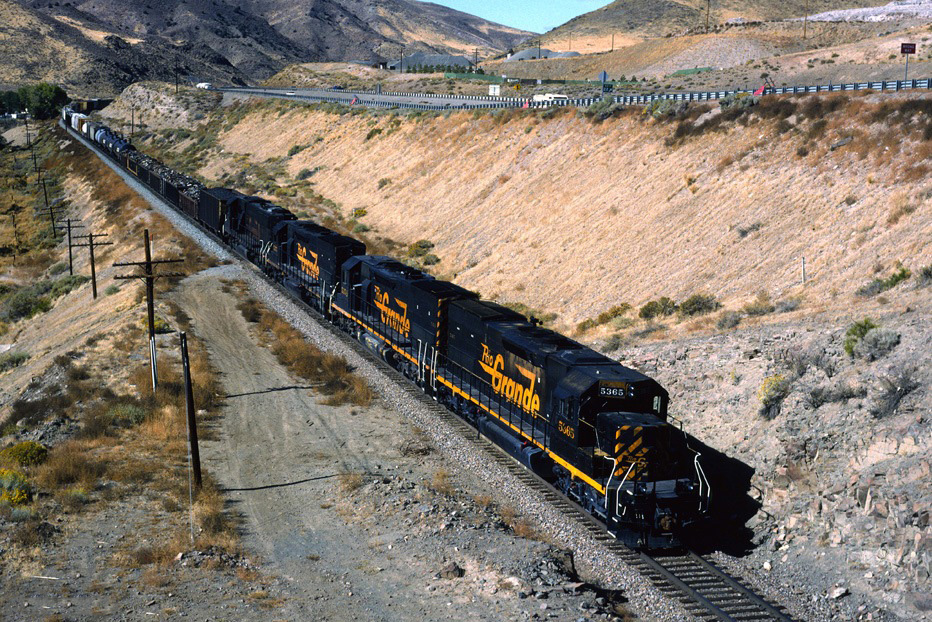 Rio Grande SD40T-2 #5365 is ahead of an eastbound manifest at Sparks/Lockwood, Nevada during October of 1996. Drew Jacksich photo.

So, if trackside along the UP becomes boring stop by the V&T or Nevada Northern to see classic railroading at its finest!

As for railroad museums and excursion trains, Nevada is home to just a few of these, although they are notable including the Nevada Northern Railway, Nevada Southern Railway, the fabled Virginia & Truckee, and the Nevada State Railroad Museum.

All four are fascinating in their own right and receive a fair amount of visitors each year.