Nevada played only a minor role in railroading although it was the location of the Central Pacific's main line, which passed through its northern periphery on its way to meet Union Pacific at Promontory Summit, Utah.

This event marked completion of America's first Transcontinental Railroad and opened the West to greater means of economic prosperity and settlement.

It is perhaps best known for several 3-foot, narrow-gauge systems which sprang up during the 1880s' mining boom.  Today, a few organizations within the Silver State keep alive its rail history, some of which even offer rides.

The recently restored, and venerable, Virginia & Truckee Railway is the most widely revered; its history dates back to the 19th century hauling vast quantities of silver.

The V&T has only been a tourist operation since the 2000's when a section of its original right-of-way was restored between Carson City and Virginia City.

Similarly, the Nevada Northern Railway, and accompanying museum, preserves the history of a railroad once important to the Ely area. 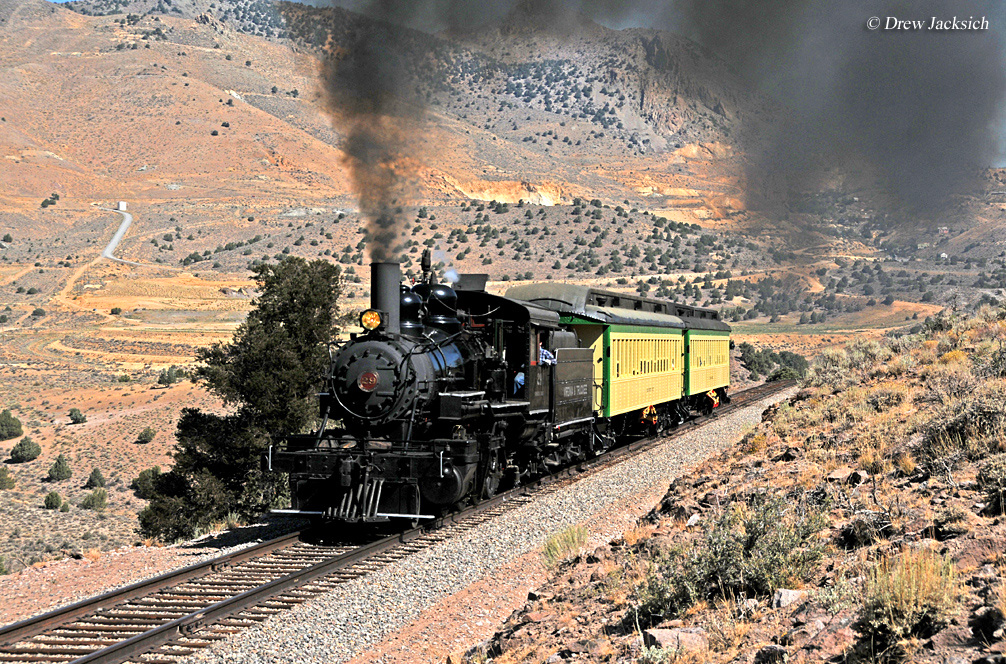 Nevada's rail history begins with the Transcontinental Railroad.  This project, in many ways, carried not only great hardship but was also a political firestorm, twisted with greed and selfishness.

The Central Pacific Railroad of California (CP), born on June 28, 1861, was tasked with building the western leg after the Pacific Railroad Act was signed into law by President Abraham Lincoln on July 1, 1862.

However, the man who originally envisioned the CP, engineer Theodore D. Judah, was ultimately pushed out of of the way by those with greater financial means; namely the "Big Four" (Charles Crocker, Collis P. Huntington, Mark Hopkins, and Leland Stanford).

The Central Pacific held a brief groundbreaking ceremony in downtown Sacramento, California on January 8, 1863 with an initial task of bridging the American River a few miles to the west.

On October 26, 1863 the first rails were spiked down and soon, tracks reached nearby 21st Street.

Just a few weeks later, on November 10th, the company's first locomotive, the 46-ton, 4-4-0 Governor Stanford (an 1862 product of the Norris Locomotive Works, this machine is preserved today at the California State Railroad Museum in Sacramento), made its first run over this stretch, which drew great fanfare.

After considerable effort to carve a right-of-way out of the granite walls that were the Sierra-Nevada Mountains, Central Pacific reached Reno, Nevada on June 18, 1868.

Less than a year later, the railroad held the now iconic meeting with Union Pacific at Promontory Summit, Utah on May 10, 1869.

As previously mentioned, aside from standard-gauge railroads numerous 3-footers were built to serve the state's once lucrative silver mining industry thanks to the famed Comstock Lode of 1859 (the first discovery of silver America).

If you are interested in steam, you can catch restored examples at the V&T and the Nevada Northern Railway.

Finally, there is the Nevada Southern which has a nice little operation near Boulder City and very reasonably priced with special events hosted at different times of the year.

The Nevada Northern Railway looks to generally preserve the history of the state's once profitable copper industry.

The railroad has been in operation (albeit not continuously) since 1905.  Unfortunately, freight operations have not been performed since 1986 when the Kennecott Minerals Company turned over much of the property to the White Pine Historical Railroad.

Finally, be sure to check out their many pieces of rolling stock and locomotives on display, including several steam locomotives.

The Nevada Southern Railway is based in Boulder City, Nevada in the southern region of the state.

It operates on trackage once owned by a railroad known by the same name, a government-sponsored operation which helped construct the Hoover Dam.

Today the railroad offers a number of special rides and events throughout the year and their coaches are fully climate controlled.

The organization also houses a collection of rolling stock and locomotives, including three steam locomotives (all of which sit on display).  These include:

While on the grounds also be sure and visit the Nevada State Railroad Museum's even more impressive steam collection, which currently includes six examples, three of which are operational.

The Virginia and Truckee Railway began with its 1869 chartering to provide transportation services to the Reno and Carson City areas.

While the V&T provided a means of moving vast quantities of silver ore it also offered a way to ship in lumber, men, and other materials needed to extract this product.

As mining dried up and with little other traffic available, the railroad ceased to exist by 1950.

It gained a new purpose soon after its closing as a backdrop for countless Hollywood western films, and it was then the railroad earned its popularity.

However, this too played out by the 1960s at which point most of the rails were taken up.

They began to be re-laid by the 1970s although the railroad's true rebirth began during the early 1990s when a major push was undertaken to rebuild the line as a tourist attraction.

Today, about 15 miles are operable although rebuilding of the route is not yet complete along with additional restorations of locomotives and equipment.