The New York, Susquehanna and Western Railway (NYSW), better known as the Susie-Q, is a 400-mile+ regional operation based in Cooperstown, New York.

The railroad has its roots dating all of the way back to 1881 when it was created through the merger of several other smaller Northeastern lines.

Through the years the railroad has cut back and abandoned some of its original routes. However, it still remains an important railroad today in the New York area and retains its classic yellow and black livery. 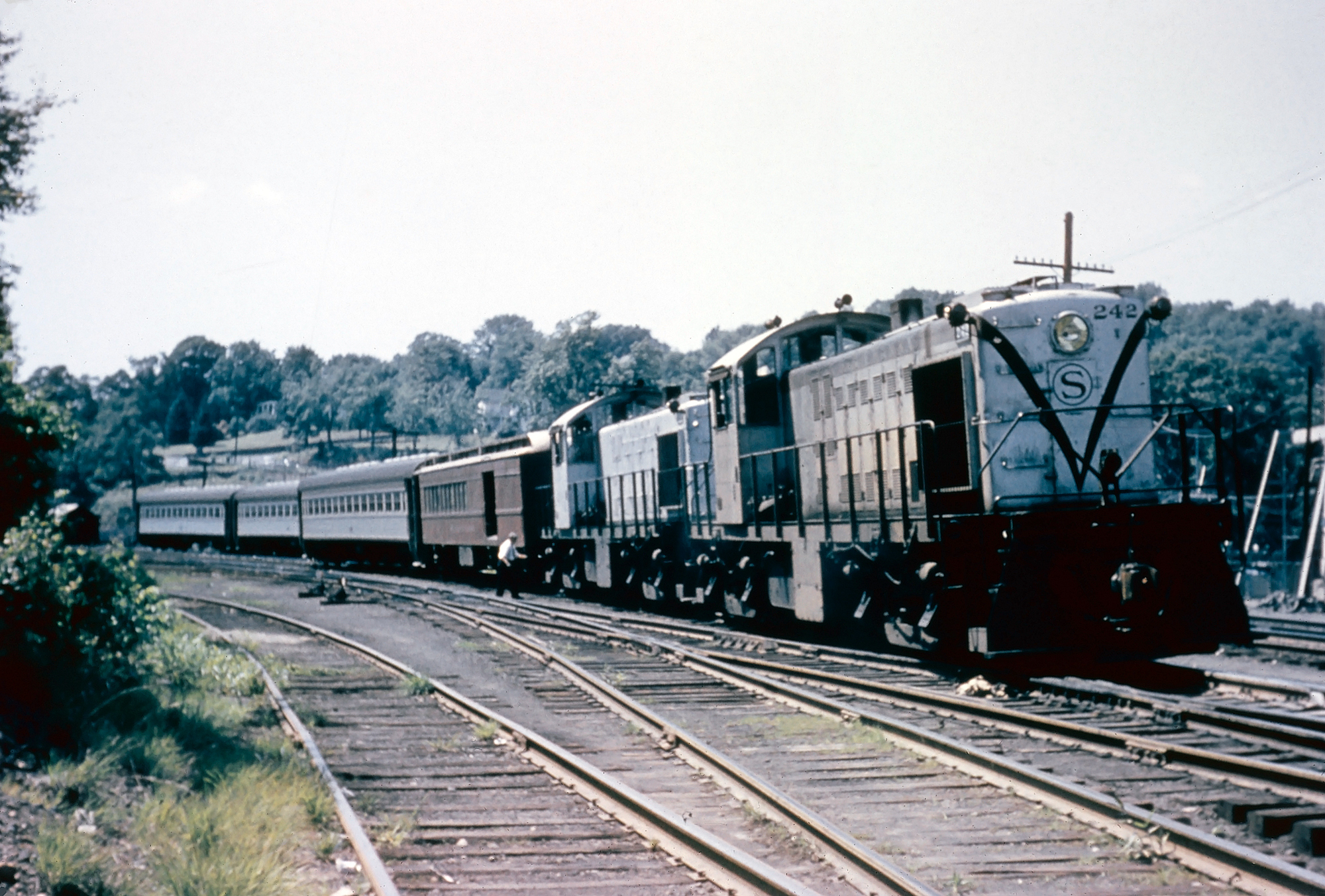 The Susie-Q has had a very interesting past in its 125+ year history. The New York, Susquehanna & Western officially began as a culmination of six small railroads that had been hit hard by the Financial Panic of 1873:


These companies dated as far back as the Hoboken, Ridgefield & Paterson Railroad of 1866 and were quite small, serving primarily the region around and just west of New York City in New Jersey and extreme eastern Pennsylvania.

The new railroad was to be called the New York, Susquehanna & Western Railroad Company, founded in the summer of 1881 as a means of handling coal from eastern Pennsylvania to New York City.

Initially, the new NYS&W was planned to simply function as a bridge line by not actually moving coal itself from the mines but using the larger Delaware, Lackawanna & Western to do so.

At Stroudsburg, Pennsylvania the black diamonds were interchanged to the NYS&W and carried eastward to New York City.

This changed in 1892 when the railroad's management decided that there was more profit to be made in hauling the coal itself and set about constructed new routes through the Pocono Mountains to do so.

Up to this point the Susquehanna owned a line that stretched from Hoboken, New Jersey to Stroudsburg, as well as a branch never Beaver Lake northward to Middletown.

The new route, chartered as the Wilkes-Barre & Eastern Railroad stretched westward from the interchange at Stroudsburg to Kingston (near Wilkes-Barre) and Scranton.

The new route, along with the construction of new docks on the New Jersey waterfront at Edgewater to export the coal, were opened by 1896.

These new projects made the Susquehanna much more attractive by other, larger railroads with its new, direct lines.

As such, in 1898 the Erie Railroad began purchasing the NYS&W's stock in large amounts and formally controlled the railroad by July of that year.

After Erie control the Susquehanna was not a well managed system, particularly after the United States Railroad Association took control of the entire industry with the onset of World War I in 1918.

In general the USRA did a disastrous job with the entire affair (save for some of the universal steam locomotive designs it oversaw) and the NYS&W exited the war in 1920 in disarray with little money and a completely worn out system.

The Wilkes-Barre & Eastern had never been a particularly successful venture, partly due to the fact that several railroads already served the Scranton/Wilkes-Barre region.

As such, it had little to offer except its connection to the Erie at Middletown and DL&W at Stroudsburg. These factors coupled with the Great Depression finally forced the NYS&W into bankruptcy on June 1, 1937.

After reorganization the trustee set to streamlining the company. First, it became an independent system no longer under Erie control and soon after abandoned the WB&E extension in the late 1930s, which was simply a money-losing line.

This, coupled with a vast reduction of its passenger services helped to buoy the railroad (including the vast amounts of traffic during World War II a few years later). 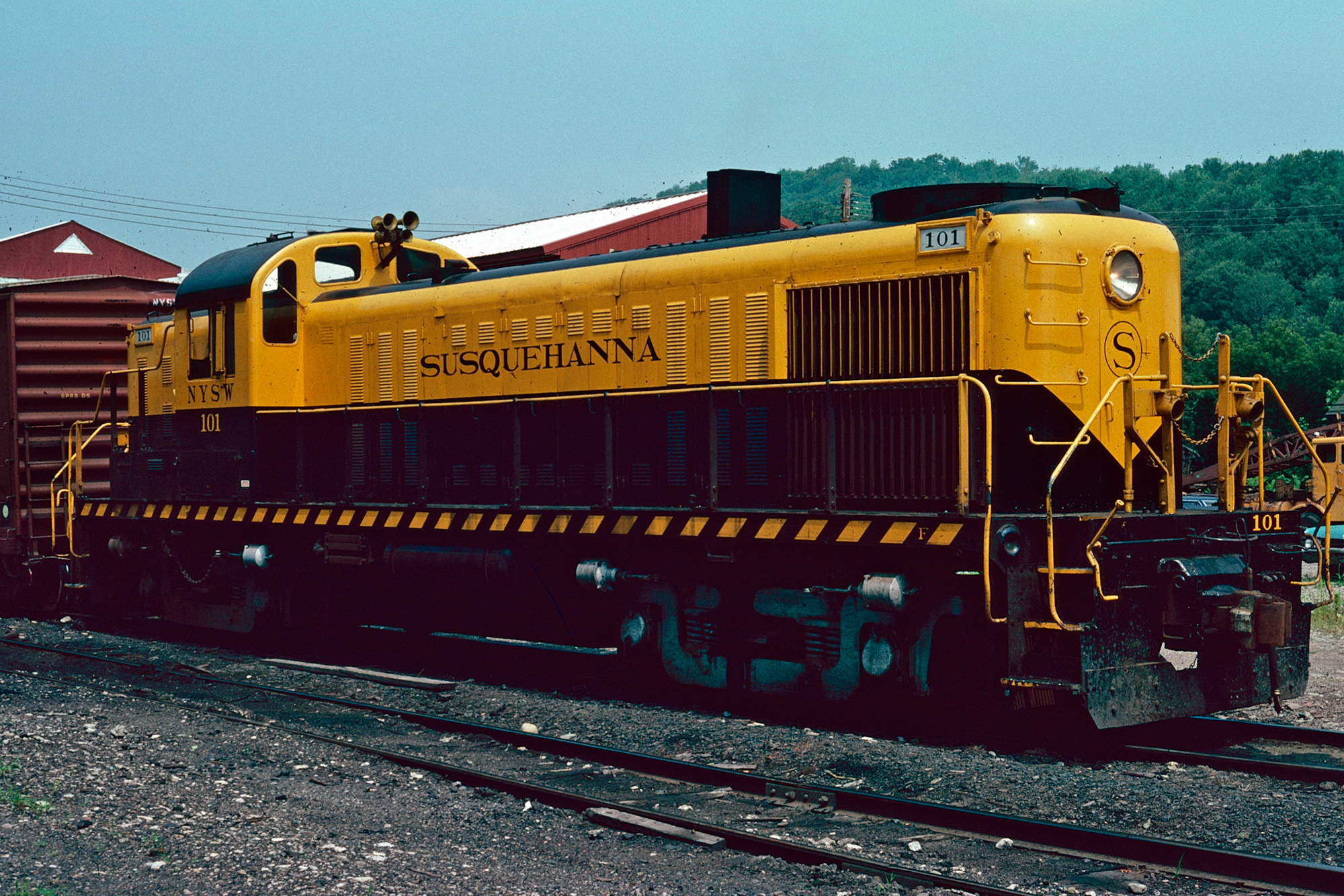 When dieselization hit the industry following World War II the Susquehanna was already ahead of the game. By 1945 it had completely dieselized its locomotive fleet (the first Class I to achieve such stature) and particularly liked models from the American Locomotive Company (Alco), purchasing RS-1s and S-2s.

However, the 1960s found the railroad again in financial trouble.

In 1966 it ended all remaining passengers services and in the 1970s it lost a vital connection with the Central Railroad of New Jersey following Tropical Storm Doria that washed out its line. Additionally, the Penn Central collapse of 1970 did not help matters any.

By the time Conrail was formed in 1976 the railroad was up for abandonment and was actually considering being shutdown and sold off altogether.

However, while the Interstate Commerce Commission contemplated the railroad's fate it was purchased by the Delaware Otsego Corporation in 1980, which had the capital to restored the company. 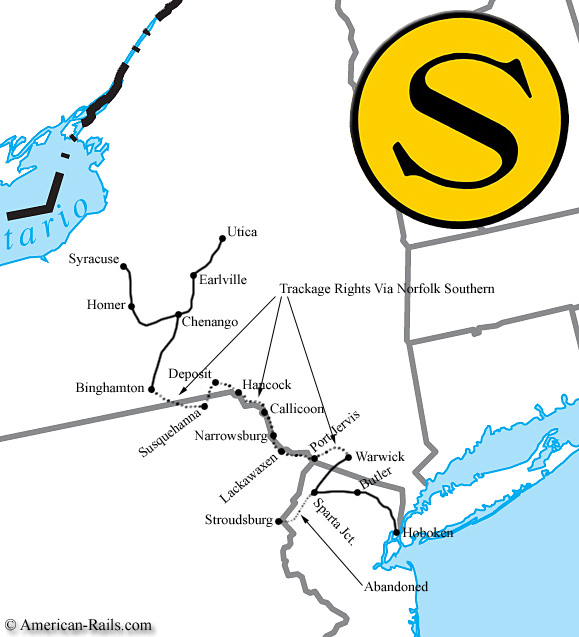 Throughout the 1980s the railroad rebounded from its woes a decade earlier. In 1982 it purchased former lines of the DL&W around Utica and Syracuse, New York from Conrail. 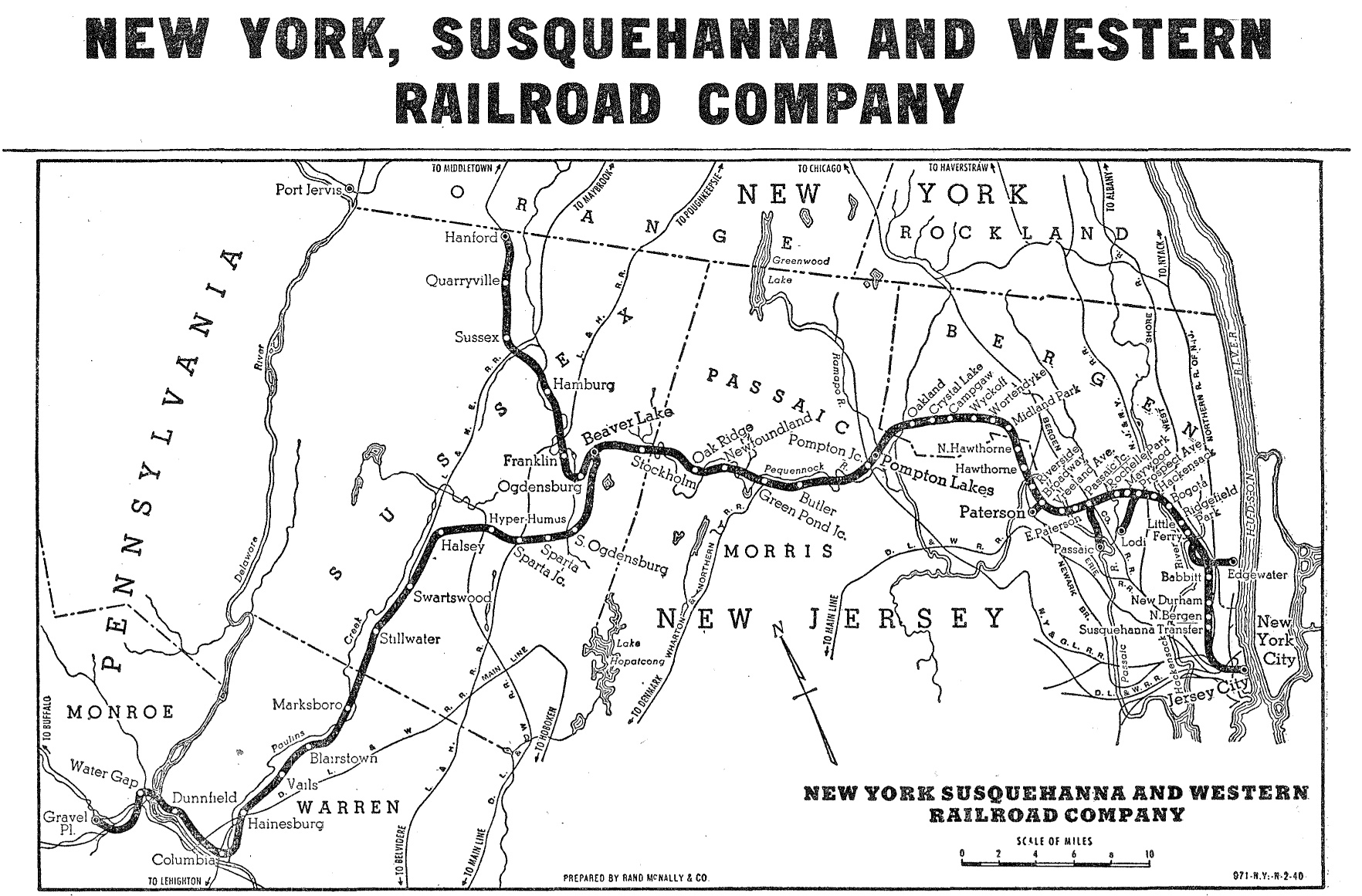 An official, 1940 system map of the New York, Susquehanna & Western.

The divisions remain unconnected even today although the Susquehanna does have trackage rights over the former Erie (now owned by Norfolk Southern) between Warwick and Binghamton although this line is operated by the railroad as the Central New York Railroad.

Today, the New York, Susquehanna and Western Railway serves over 85 customers and has a diverse traffic base ranging from lumber/building materials, plastics, paper and chemicals to aggregates and food grade products.

The railroad also offers the option of bulk transfer facilities. It is now larger, hauls more tonnage, and is more profitable than it ever was at any point in its more than 130 year history.

The NYS&W's current roster is an eclectic assortment of locomotives ranging from GEs and EMDs to Alcos (albeit all of the Alcos are currently out of service).