Observation cars became a fixture on passenger trains with the development of the heavyweight passenger cars in the early 20th century (these heavyweight versions became very famous for use by presidents or presidential candidates when they used to campaign heavily by train).

At this time they served primarily two purposes; one, of course, was to allow passengers to enjoy the views from essentially a moving porch.  The other was to provide a "finished" appearance to the train and offer a location for its drumhead (name/logo).

However, it wasn't until the streamliner era that the observation is best remembered. With the development of lightweight, streamlined equipment, observations completed the look with almost all designs featuring a type of rounded end.

Today, Amtrak has abandoned the use of observation cars although you can still ride aboard one by visiting one of the tourist railroads around the country which operate them.  In addition, a number of affluent individuals have restored both open-ended and streamlined observations for private use. 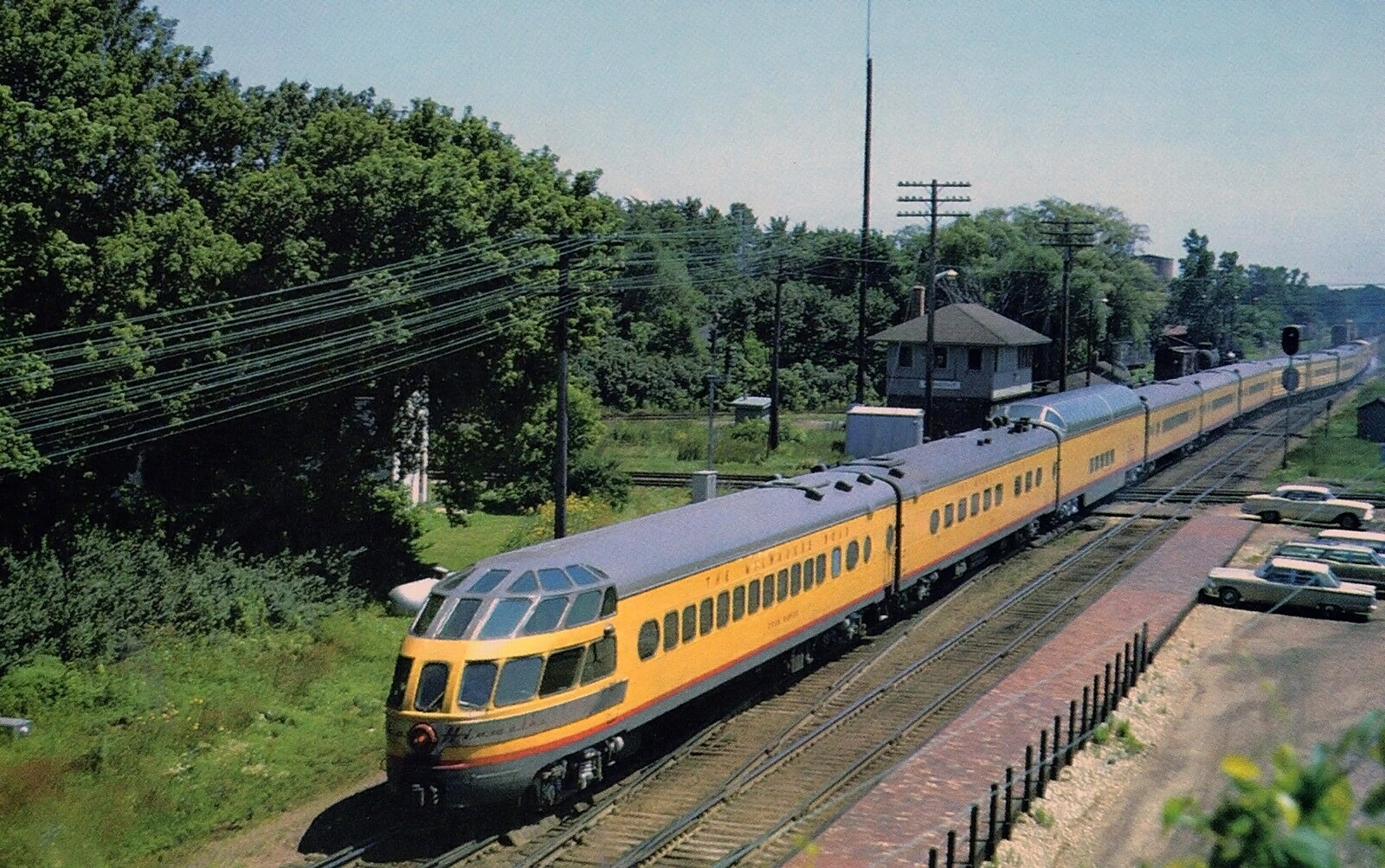 A Milwaukee Road Skytop lounge observation brings up the tail end of an eastbound "Morning Hiawatha" rattling across the Elgin, Joliet & Eastern diamonds at Rondout, Illinois on a July afternoon in 1967. Richard Wallin photo.

As John White, Jr. notes in his book, "The American Railroad Passenger Car (Part 1)," the earliest known examples of open-air observations appeared on private or office cars in the 1850's.

In 1869 the idea was pitched to George Pullman by Joseph Becker, an artist employed by Leslie's magazine, it does not appear Pullman showed much interest at this time.

These early observations are first known to appear in standard service with the 1888 debut of Pullman's Aladdin, an observation-lounge which appear that year on Union and Central Pacific's (Southern Pacific) Golden Gate Special.

In 1889 Pullman released an improved car, the Sybaris, which featured a roomier porch area.  After the release of these cars, observations became a fixture on the industry's top trains through the Great Depression era.

They even offered nighttime viewing in 1926 when Northern Pacific debuted a fleet of observation-clubs that included a 250-watt searchlight on the roof.

By the 1930's interest was waning in the open-air observation; when the train was at-speed they were windy, somewhat noisy, and kicked up a great deal of dust and dirt.

This decade also saw the introduction of lightweight streamlining; coupled with the Art Deco era and more liberal use of colors, trains radically changed from dull modes of transportation to vibrant, fast, and flashy fixtures of Americana.

The close-ended observation first appeared in 1909 when the Chicago, Burlington & Quincy introduced sun parlor or solarium cars, which essentially featured large windows towards the rear and a location for the drumhead, which could be attached to either side of the end vestibule. 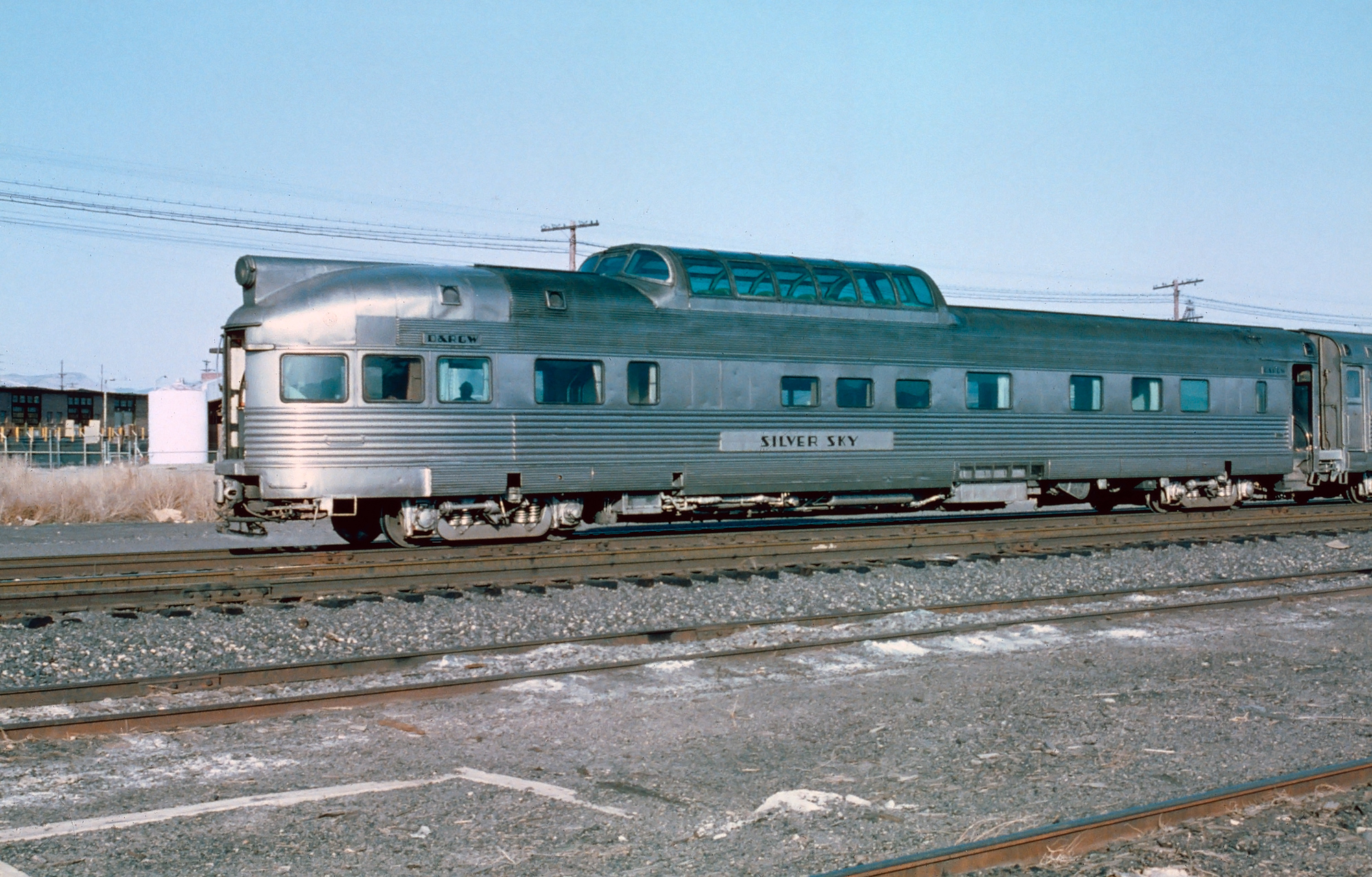 While it solved the open-air problem it did suffer from limited viewing.  With style all the rage, Pullman unveiled the so-called "swallow tail" car for the 1933 World's Fair.  It was constructed of aluminum and featured the now-classic round-end, a trademark of the streamlined era. 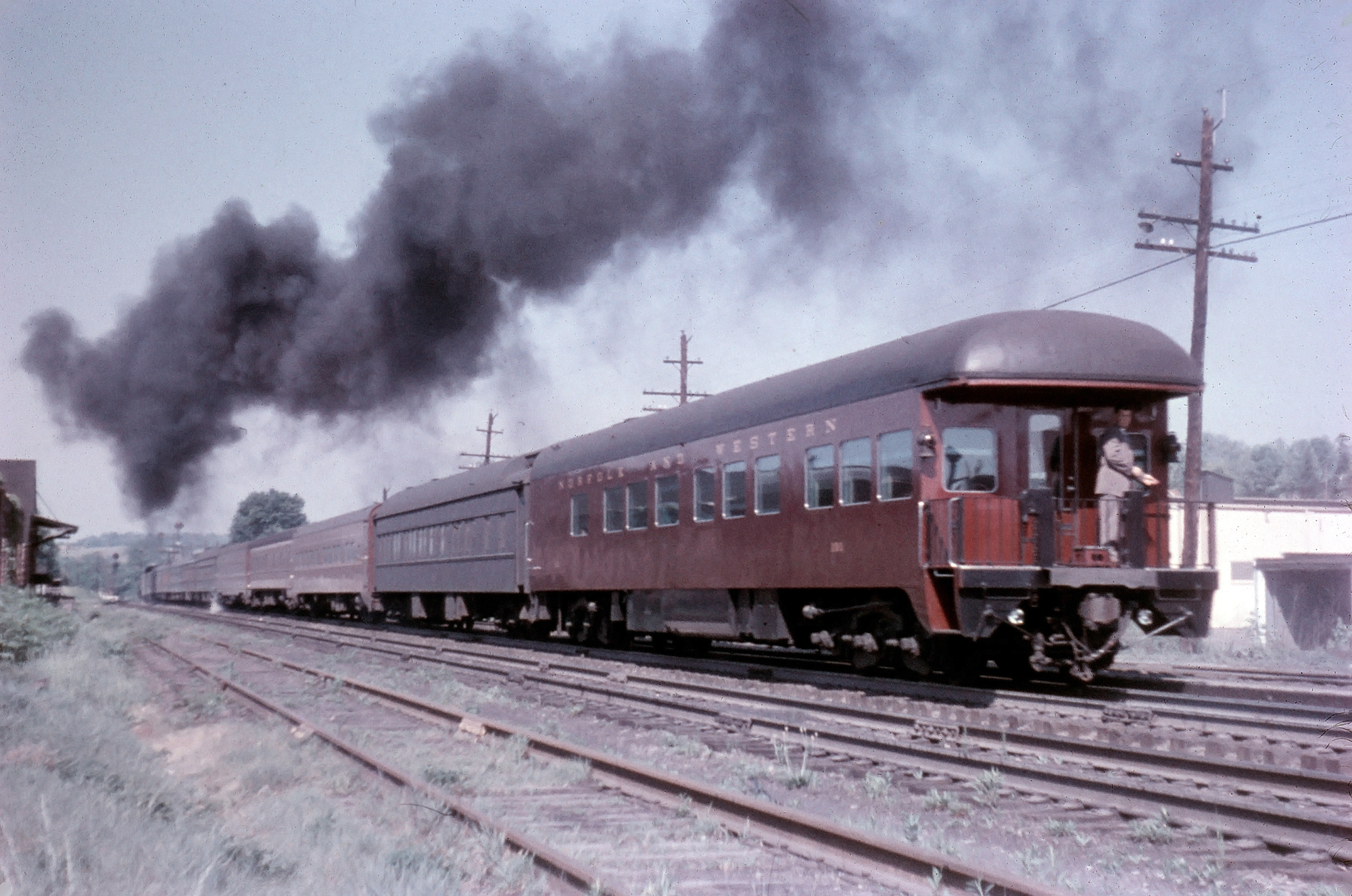 Ironically, the idea was not original to Pullman.  It had actually first been tested around 1900 by F.U. Adams using a set of former Baltimore & Ohio wooden cars.

The final was product was nearly identical to what Pullman introduced over 30 years later.  Unfortunately, railroads came to recognize a major flaw with these cars; despite their good looks, they were a headache in general service.

Without an end vestibule they required an additional switching move and because of their shape, always had to be placed at the rear of a train; while this seems elementary, railroads constantly seek redundancy.

They were almost universally located at the end of the train to make the trip more enjoyable and usually featured a lounge area and/or sleeping compartments although some cars were also used as diners.

Later during the streamliner era designs, such as those used aboard the California Zephyr, featured domed observations for a maximum viewing and sightseeing experience.

Other trains may have been more luxurious and for the well-to-do but none could compare to what the California Zephyr offered in the way of friendly service and breathtaking scenery.

Operated jointly by the Chicago, Burlington & Quincy (the Burlington Route), Denver & Rio Grande Western, and Western Pacific the train traveled through some of the most spectacular scenery in the country.

As a result, it was not surprising it continued to do well even when train travel by the 1960s and 1970s was waning with the public. 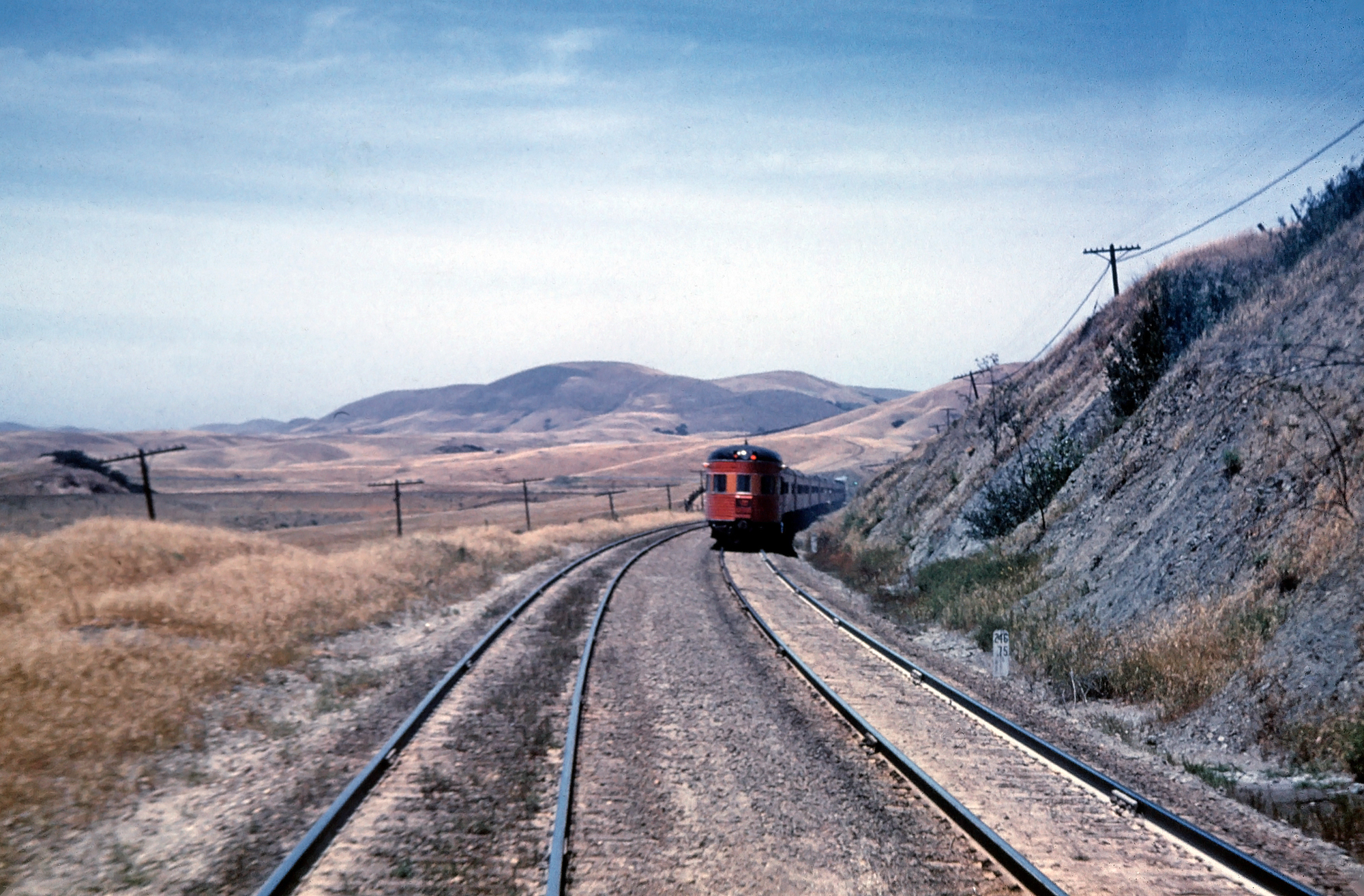 After it was relinquished to Amtrak in the 1980s it was not only retained but also returned to its original name and today the CZ remains one of the most popular long distance trains in the country.

Some railroads chose to design or build their own observation cars, most notable was the Chicago, Milwaukee, St. Paul & Pacific (the Milwaukee Road).

When the CMStP&P introduced the regional streamliner, Twin Cities Hiawatha, in 1935 the train operated a unique "Beaver Tail" observation, which featured a sloped rear end thus giving the car its unique name. 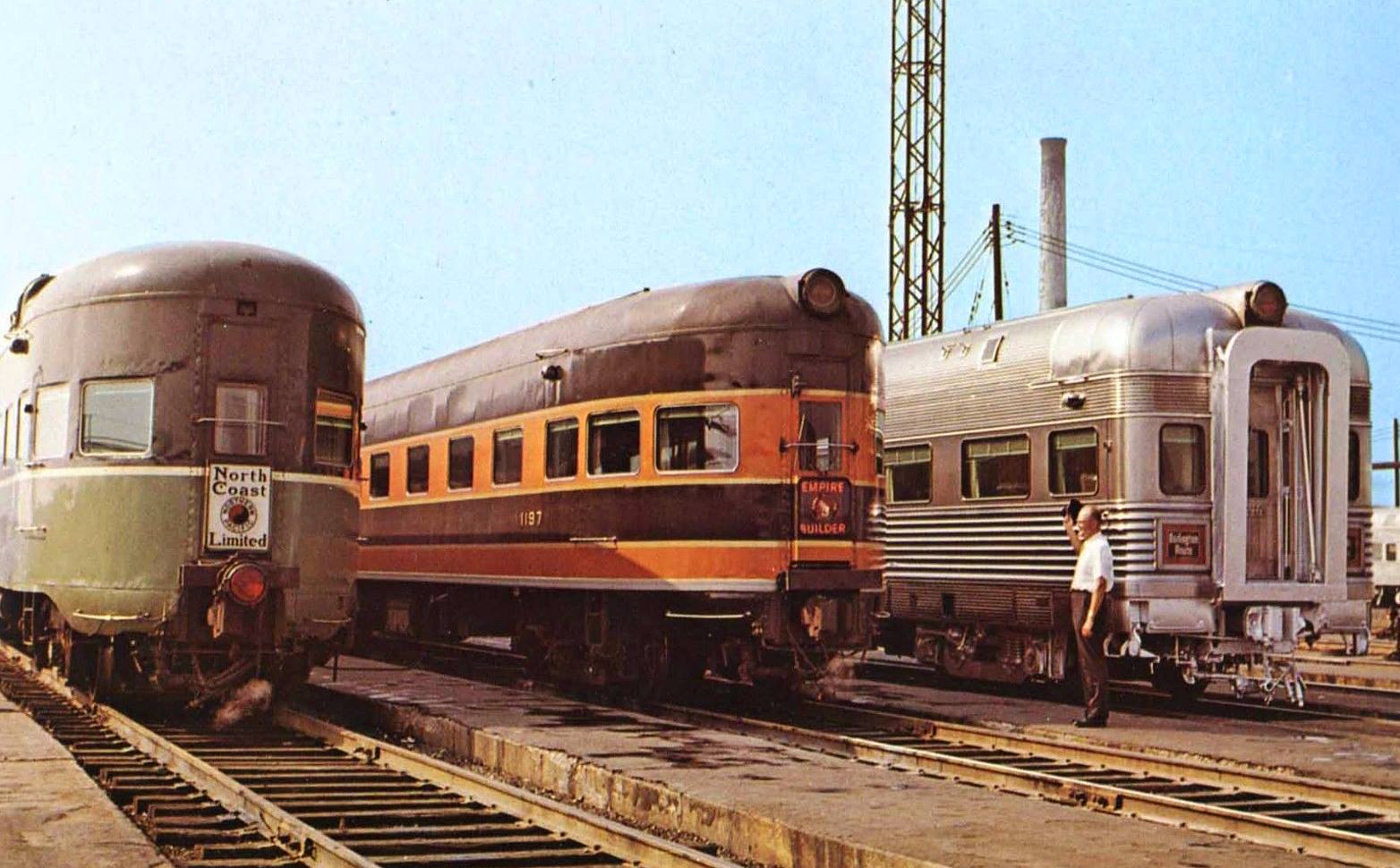 A Chicago, Burlington & Quincy company photo featuring the afternoon lineup in Chicago to the Twin Cities during the 1950s. From left to right: a Northern Pacific 390-series sleeper-buffet/lounge-observation (1 compartment/4 bedroom) with the "North Coast Limited"; Great Northern roomette-observation "Grand Coulee" with the "Empire Builder"; and Burlington Vista Dome-parlor-observation "Silver Terrace" with the "Afternoon Zephyr."

Then, a decade later in 1947 when the railroad introduced the transcontinental Olympian Hiawatha the train featured perhaps the most exotic observation car ever built, the famed Sky Tops.

Configured as sleeper-lounge cars the Sky Tops were designed by industrial designer Brooks Stevens with the rear of the cars featuring a beautiful solarium lounge that afforded passengers unprecedented views of the outside world.

Domed observation cars were mostly featured on passenger trains of the western railroads due not only to the wide open vistas afforded but also because height restrictions were not such an issue as they were back east, making dome cars in general rather rare. 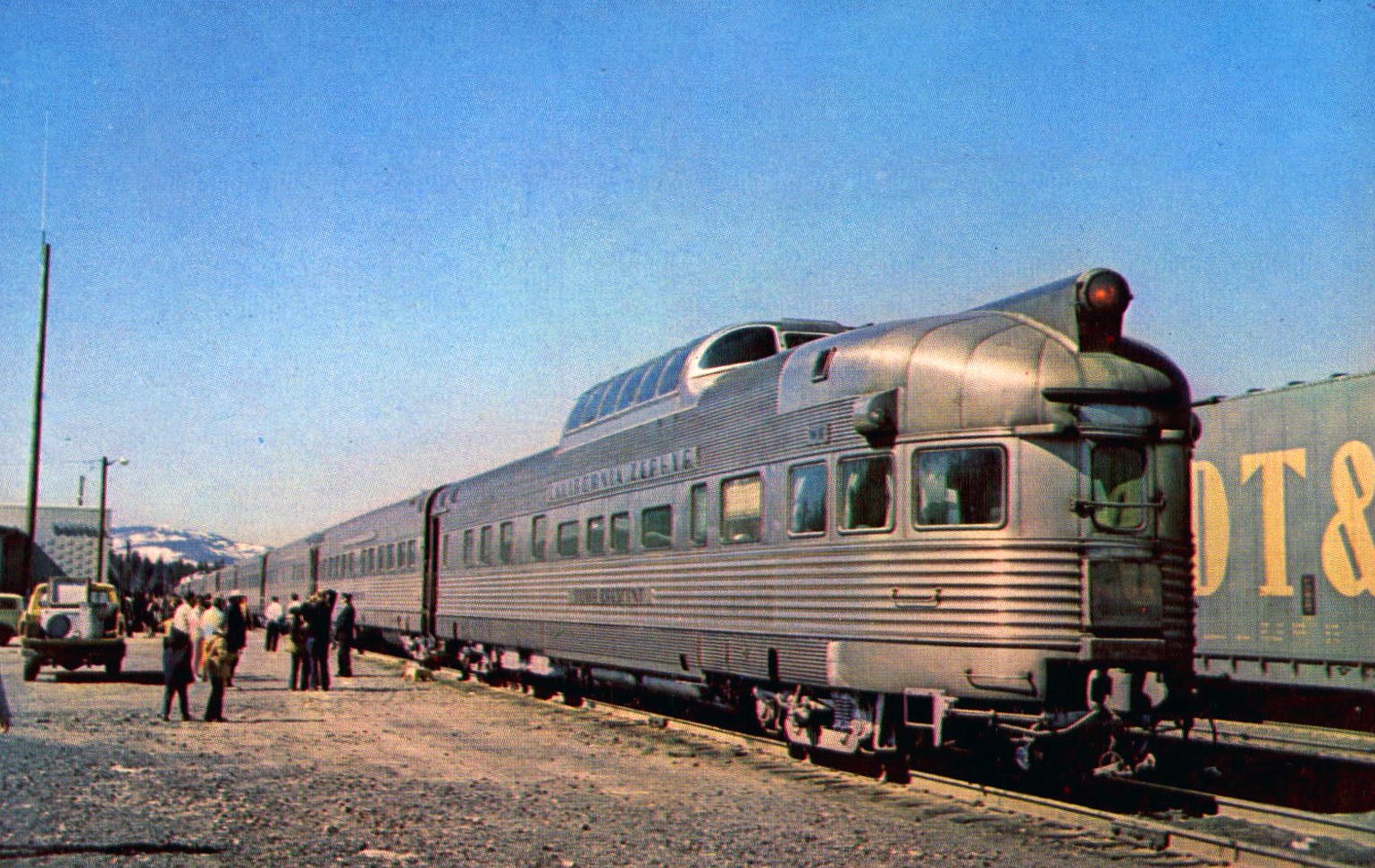 With passenger rail travel waning in the 1960s railroads began to cut back on the service where and when they could. As a result, save for a railroad's most prominent passenger train(s), most runs that operated observation cars lost the service to curb operating expenses.

Until the end, however, when Amtrak took over intercity passenger rail operations in the spring of 1971 some railroads remained determined to provide top quality service on their trains such as the Rio Grande's then Rio Grande Zephyr, the Southern Railway, and the Baltimore & Ohio.

With the startup of Amtrak the carrier continued to use observation cars in a limited capacity on some its trains. 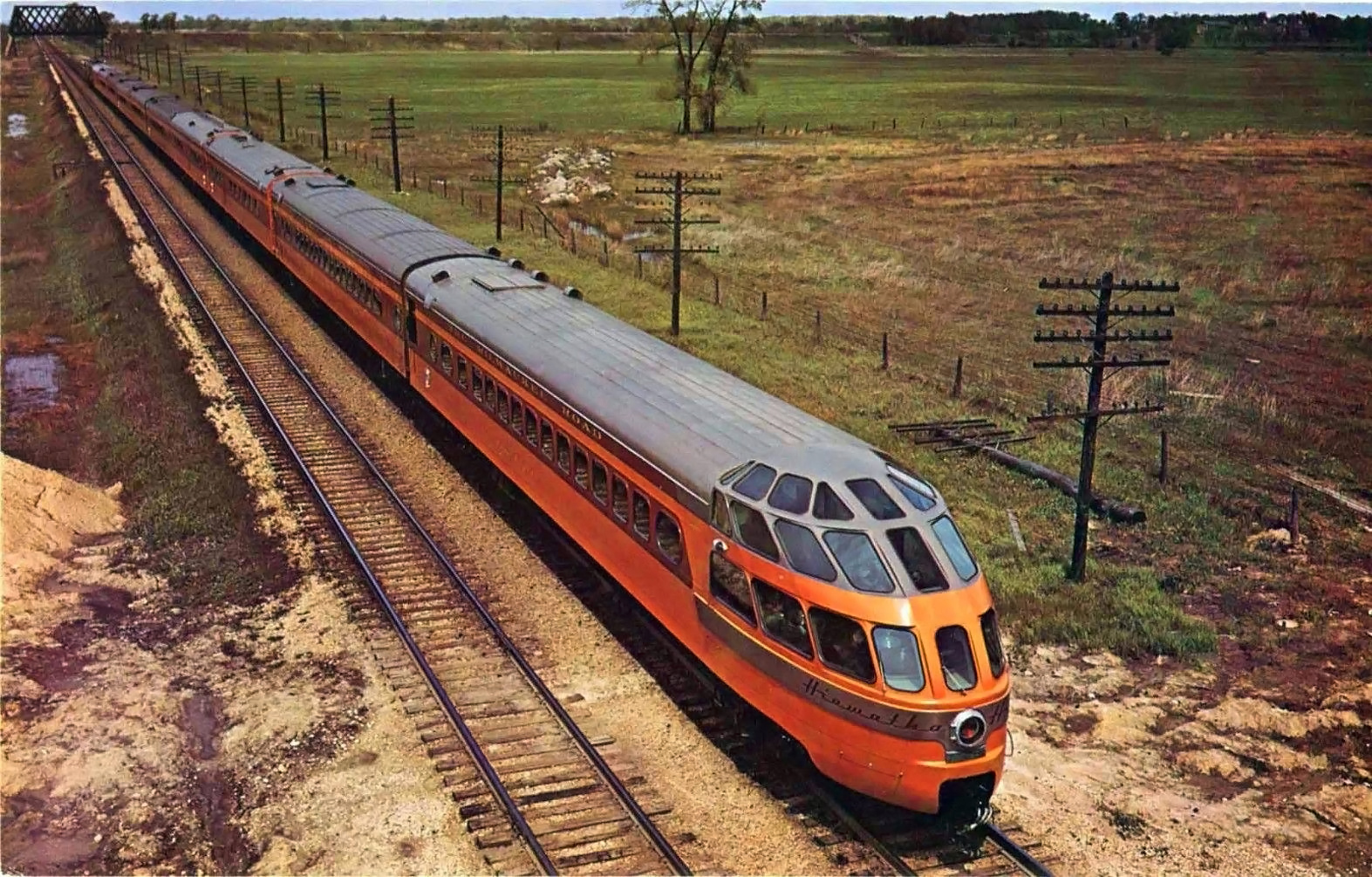 A Milwaukee Road publicity photo featuring the westbound "Morning Hiawatha" about to duck under the Chicago & North Western overpass at Techny, Illinois in 1949. Bringing up the rear is one of the new Skytop lounge observations featuring 12 solarium seats, 24 seats, and a drawing room.

However, the company would eventually park all of its handed down observation cars and removed them from service altogether.

In general and perhaps the easiest way to ride aboard a true observation car today, either a heavyweight or streamlined version, one must find a tourist railroad that operates such a car like the Western Maryland Scenic Railroad, Strasburg Railroad, or Napa Valley Wine Train.