The Oregon Electric Railway (reporting marks, OER), also known as The Willamette Route, grew into one of the largest interurbans ever operated stretching from Portland to Eugene on a system that covered well over 100 miles.

Before the OE could even complete its main line it was acquired by the James J. Hill interests and operated as a subsidiary.

From an early era the company stressed the importance of its freight operations, which allowed it to easily weather the decline of the interurban industry from the 1920s through the 1940s.

It would finally abandon electrified operations altogether in the early 1950s and fully dieselize although it is still well remembered today for its wide collection of freight motors, some of which were quite powerful.

Today, virtually the entire OE main line is still in service, used by short line Portland & Western and owned by different interests (including the P&W). 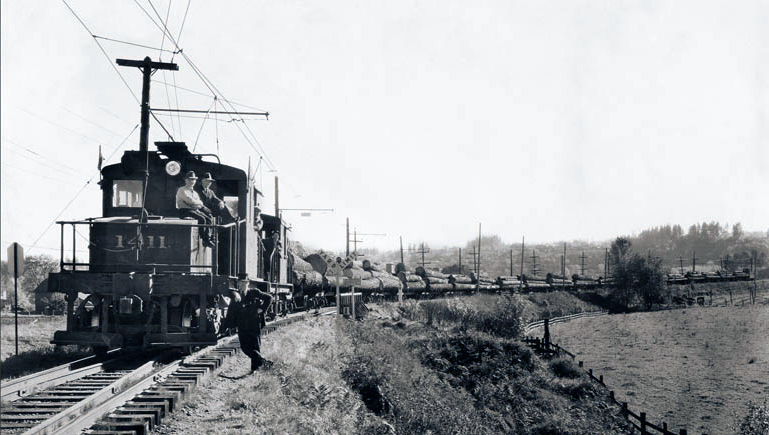 A pair of Oregon Electric steeple-cabs have a long string of logs south of Portland, Oregon circa 1920.

The history of the OE began in 1905 with the founding of the Willamette Valley Traction Company, chartered to construct an interurban route along the west and east sides of the Willamette River from Portland to Salem (a distance of around 47 miles).

The planning for this new road occurred during the first year of the second major building period of the interurban industry, which occurred between 1905 and 1908 (the first lasted from 1901 through 1904, the year's gap being caused by the financial panic in the fall of 1903).

It should also be noted that at this time Portland was already being served by another interurban (since 1891), the Oregon Water Power & Railroad which later became the Portland Traction Company.

The road was situated on the east side of the river (although did eventually gain access into the city's downtown area) and would eventually provide service to most of the city's suburbs located there.

On January 1, 1908 the WVTC opened its main line between Portland and Salem, and soon after was renamed the Oregon Electric Railway.

For the rest of that year through 1909 additional extensions reached Forest Grove (west of Portland) as well as a short branch to Woodburn.

From the beginning the system was owned and financed by the W.S. Barstow & Company but after just two years of service and before any further construction could commence it was acquired by the Great Northern and handed over to subsidiary Spokane, Portland & Seattle Railway in 1910.

The SP&S was a mid-sized Class I property owned by James J. Hill, and specifically was used by transcontinental parents GN and Northern Pacific to reach Portland and southern Washington.

An official system map of the Oregon Electric, circa 1914.

The actual purpose of the SP&S taking over the interurban was Hill's continued battle with Edward Harriman's Union Pacific and Southern Pacific for predominant control of rail service in the Pacific Northwest.

They also fought a similar battle in eastern Washington/northwestern Idaho and ultimately settled the dispute by jointly operating the Camas Prairie Railroad.

As it turns out the OE was not the only electrified operation the SP&S controlled in the region as it also acquired the United Railways which served the area just to the west of Portland.

In 1912 the OE continued to expand reaching Albany on July 4th and finally Eugene that same year on October 17th.

On March 25, 1913 it opened a short branch to Corvallis and later added a long, 44-mile extension east of Albany to Dollar and Foster (built specifically for freight service).

In total, the OE boasted a system stretching more than 190 miles. 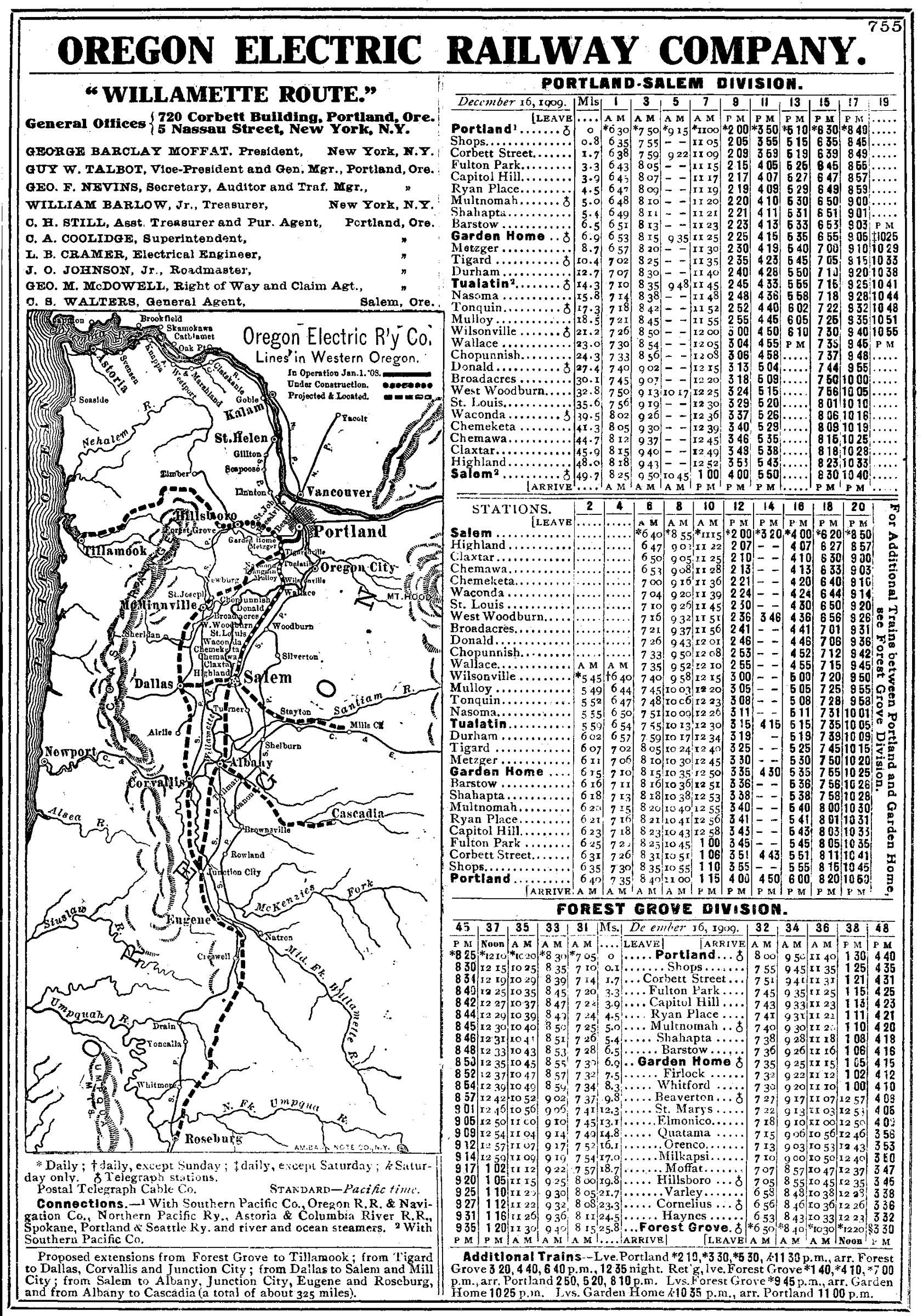 Oregon Electric's listing in the 1910 Official Guide. Note that at this time the interurban was still under construction. Author's collection.

The OE featured a wide range of interurban cars from various manufacturers and offered some of the most luxurious rides anywhere with parlor and observation service quite common.

It even offered a rarity for interurbans, through service with all major railroads in the region, except competitor Southern Pacific.

Perhaps, though, its most impressive equipment was its array of electric freight motors. Most common was General Electric's typical B-B "Steeple Cab" design, found on many interurbans for freight service that could perform a wide range of roles.

However, its most fascinating units were two models of a B-B-B-B wheel arrangement; one a center-cab design and the other a dual-cab model. 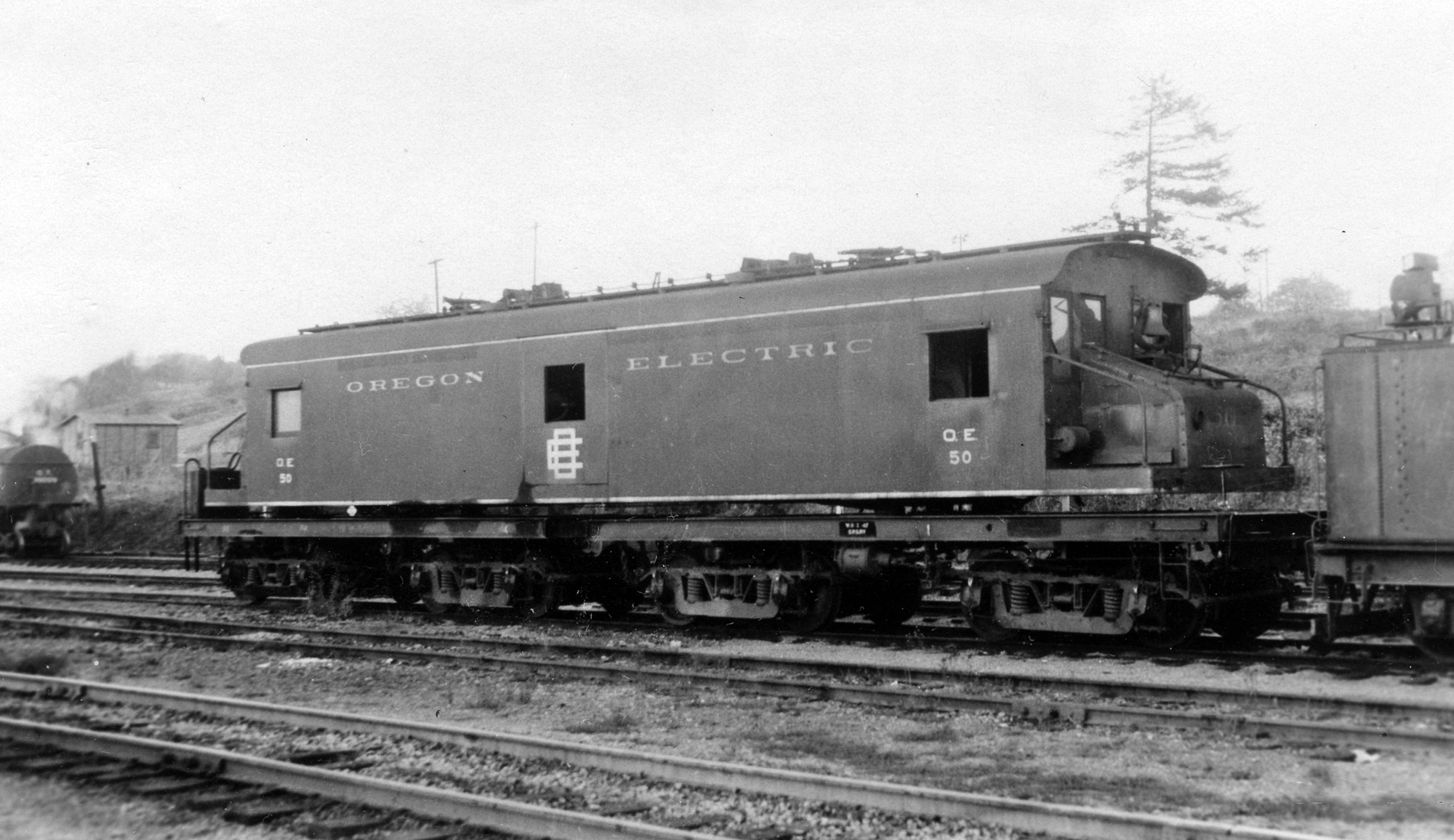 Curiously, after these units saw just a few years of service (only a year for the last, #62) the OE ended all electrified operations and replaced the motors with four Alco RS1s, #52-55, in 1945 (the dual-cabs were purchased by Chicago's North Shore Line).

By this date the OE had already witnessed several cutbacks due to the Great Depression and loss of passenger traffic (the Corvallis Branch was abandoned in 1931, as was the line to Woodburn around the same time, and all passenger services were eliminated in 1933).

In the late 1940s the downtown Portland traffic was let go although after this the road saw no further major cutbacks.

It is somewhat surprising that overall the OE was not a very profitable company, regularly running operating deficits which its parent had to cover (for instance, in the 1930s it was running nearly $500,000 in debt annually), although the SP&S was willing to take these losses due to the significant freight traffic the system provided. 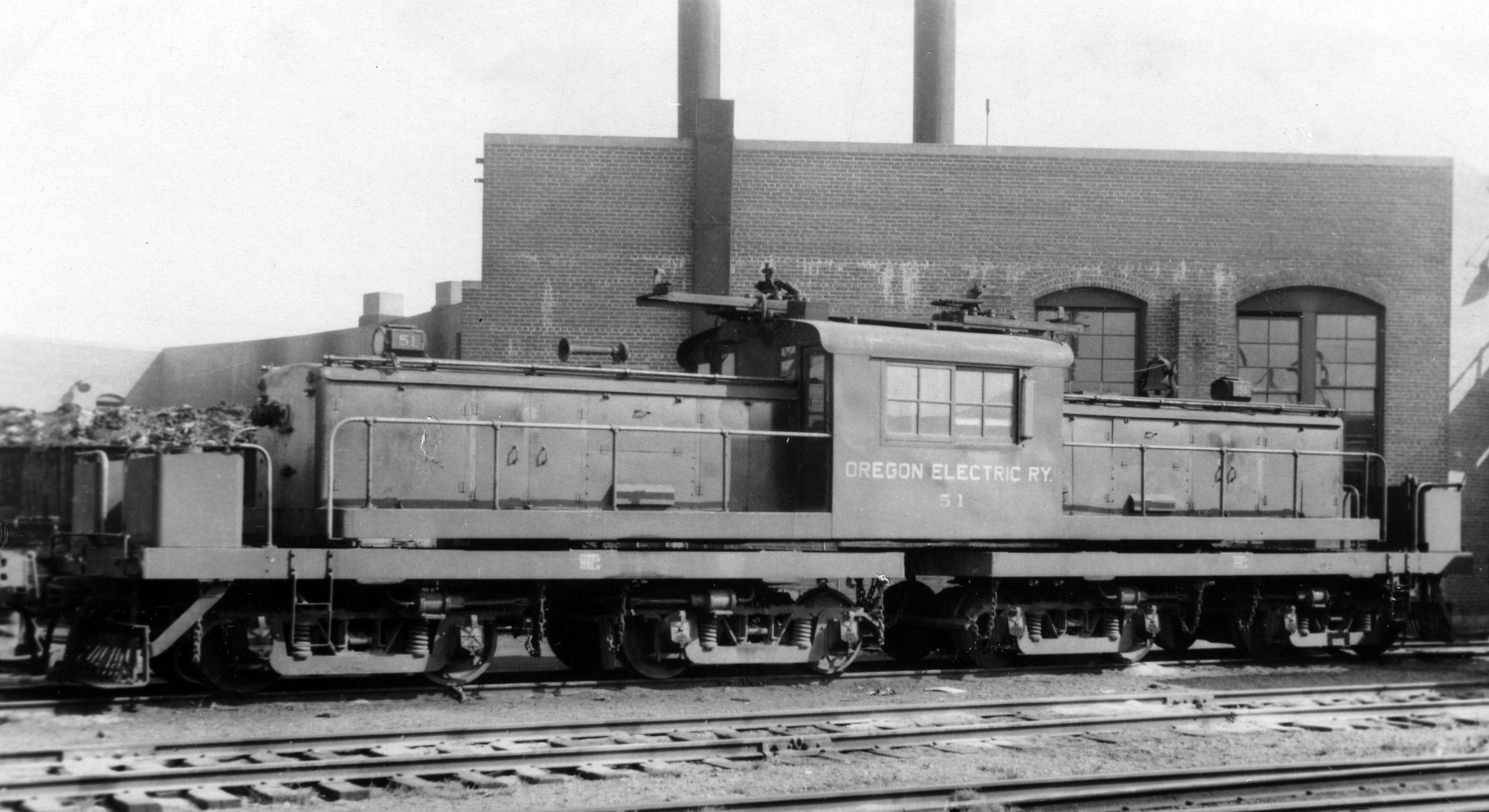 Another of the powerful motors built by SP&S shop forces in the early 1940s; seen here is #51 which sported a center-cab setup and was also later sold to the North Shore Line.

As a subsidiary the OE's final day of operations occurred on December 31, 1994 when Burlington Northern ran its last train over the Portland to Beaverton section of the route.

Today, the entire main line remains in use as well as the former Forest Grove branch; ownership is split between the Portland & Western, BNSF Railway, and the state of Oregon.

In a somewhat ironic twist, the Tigard to Wilsonville segment is again carrying passengers as part of the Westside Express Service commuter line.

This is not the only example of a major city reintroducing "interurban" services, which are now referred to as light-rail-transit, or LRT, operations.  For further reading about the system please click here.