The Ohio Central Railroad System (reporting marks OHCR), now a part of the Genesee & Wyoming family of short lines, was once based out of Coshocton, Ohio.

In its original incarnation, the system was actually a combination of small short lines under one banner, deliberately set up in this manner to allow the communities in which it served to feel more like they have a railroad to call their own.

The railroad dated back to 1988 when a former owner, the late Jerry Jacobson, acquired a single segment of track in central Ohio and grew into one of the largest Class II, regionals in the country.

The OC, operated almost exclusively in Ohio (they also have a presence in western Pennsylvania), was broken down into three divisions, which include the Southern Lines, Youngstown Division and Pittsburgh Division.

Since the sale to Genesee & Wyoming the individual Ohio Central properties have lost much of their identity but remain on paper. 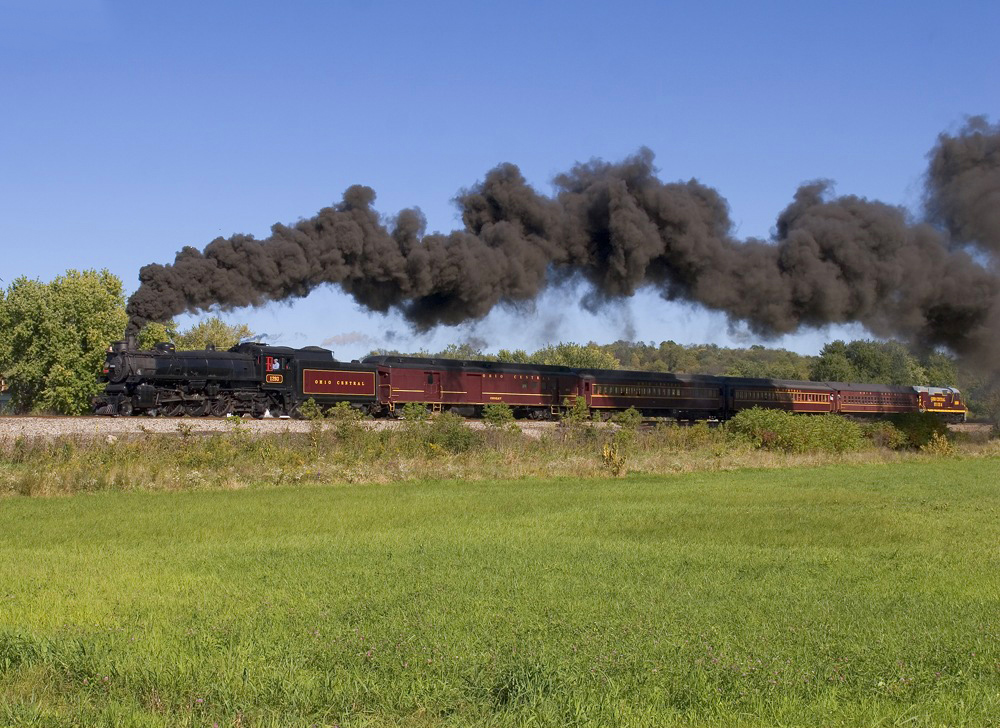 Ohio Central 4-6-2 #1293 steams through Jewett, Ohio with a chartered excursion on October 7, 2006. This locomotive was built for the Canadian Pacific by the Canadian Locomotive Company in 1948. It saw just ten years of service before its retirement in 1959. It was subsequently sold to Steamtown USA in 1964 and acquired by Jerry Jacobson in 1996. Today, it resides at the Age of Steam Roundhouse in Sugarcreek, Ohio. Wade Massie photo.

Within Ohio Central's three divisions were no less than ten individual short lines. While these small railroads operated mostly as paper companies many carried its very own livery giving them a local feel to the communities they serve.

The Ohio Central's most famous corridor is the ex-Pennsylvania Railroad's "Panhandle" main line across central Ohio.

Under Conrail, large segments west of Pittsburgh were pulled up.  In 2008 Mr. Jacobson decided to sell off his major asset to the short line conglomerate Genesee & Wyoming, in the process becoming a multimillionaire.

It was reported at that time the Ohio Central boasted 70,000 carloads annually, contained 10 railroads, maintained 550 route miles, and had 200 employees.

It was sold for $234 million.  While the OC is no longer independently operated, the former owner gave the railroad historical movement one of its greatest assets when he completed his multi-million dollar "Age Of Steam Roundhouse" complex in 2012. 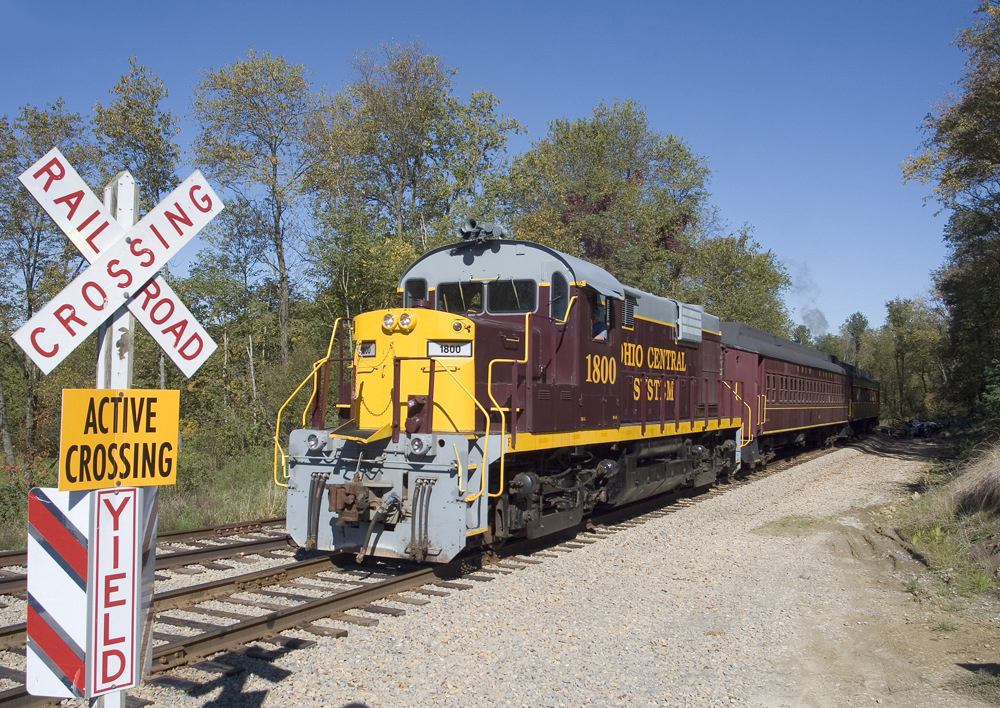 Ohio Central RS18 #1800 (built as International Nickel Company of Canada/INCO #208-2 in 1958 by the Montreal Locomotive Works) is on one end of the "Akron Chapter Special" at Panhandle, Ohio on October 7, 2006. Wade Massie photo.

It is a meticulous replica of an original 18-stall roundhouse and for now will house his vast collection of steam locomotives.

Upon selling his railroad to the G&W, Mr. Jacobson set about constructing his new roundhouse in 2010 which featured an impressive 18 stalls and a 115-foot turntable.

The fleet continues to grow and currently includes 22 locomotives, a few of which remain operational.  The most recent acquisition before his passing came in December of 2015 when Woodward Iron Company 2-10-0 #41 was sent to Sugar Creek.

The Decapod was originally built in 1928 by the Baldwin Locomotive Works for the Alabama, Tennessee & Northern Railroad and sold to Woodward in 1948.   The facility also maintains 12 historic diesel locomotives. 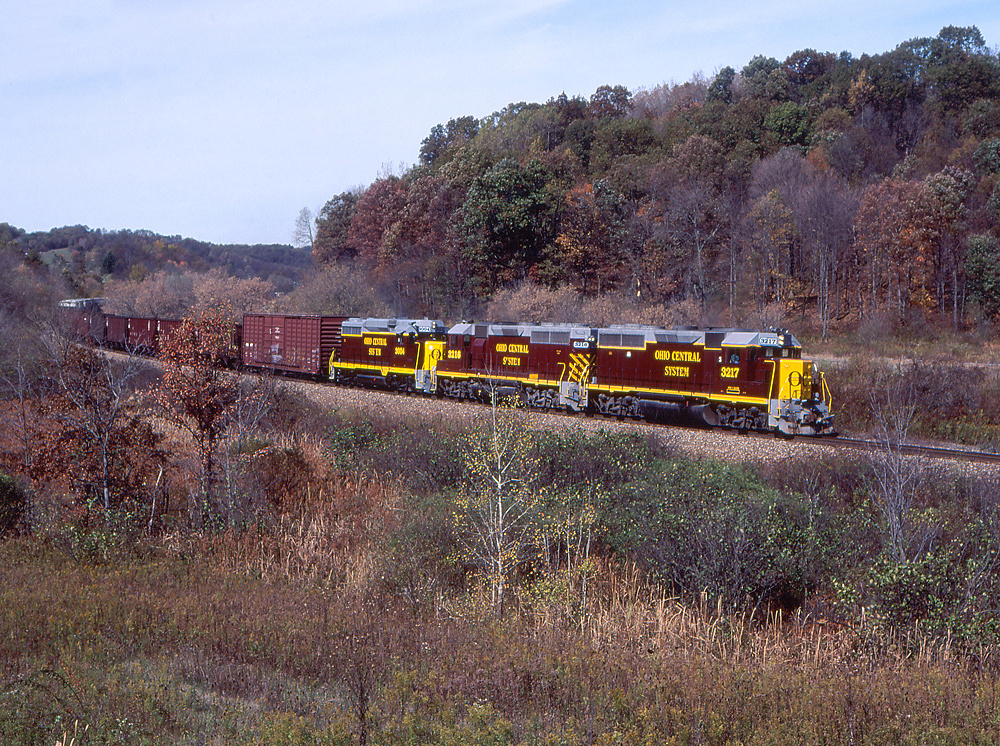 In addition to the steamers others are under restoration.  Following Jerry's passing, the roundhouse opened its doors to the public in 2018, offering a rare glimpse inside an active roundhouse, a facility which has almost entirely disappeared within the industry.

Its very latest acquisition was Bessemer & Lake Erie 2-10-4 #643, added in August, 2019.  The big locomotive has sat forlorn on an isolated siding near Pittsburgh (McKees Rocks) for years.  Below is a list of the railroad’s former divisions and short lines operating within them:

At this time the railroad handled coal, steel, brick, plastic, clay, and lumber.

The properties he controlled at that time (Ohio Southern, Youngstown & Austintown, and Ohio Central) were collectively referred to as the Ohio Central Railroad System. 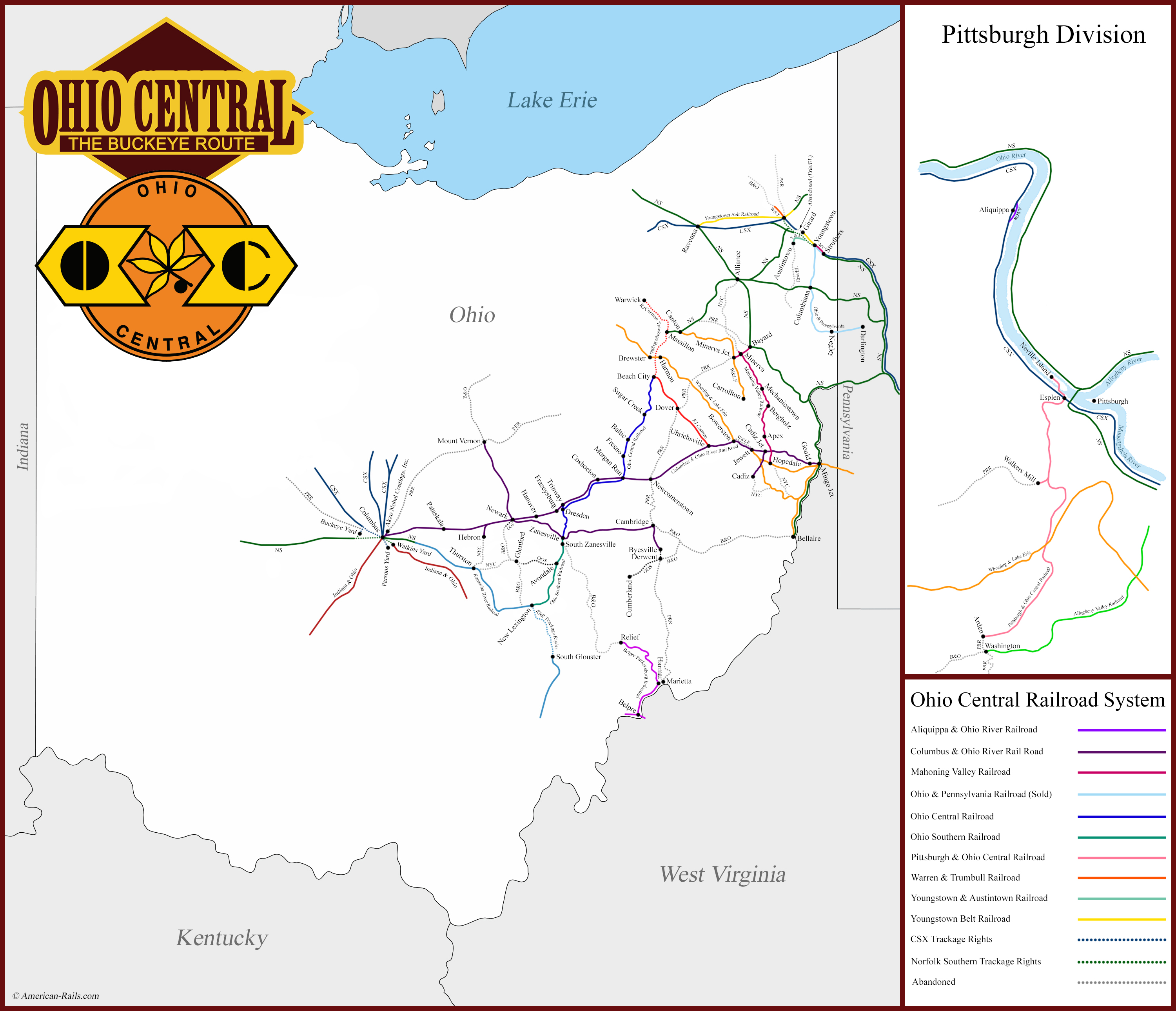 Ohio Southern Railroad (OSRR):  This was Mr. Jacobson's original short line, launched in 1985 over the former Pennsylvania between Zanesville and New Lexington, acquired from Conrail.

It also included a former New York Central branch between Glass Rock and FS Junction (located south of Zanesville).  Most of the latter is now out-of-service with the right-of-way owned by the state of Ohio.

Columbus & Ohio River Railroad (CUOH):  The largest individual part of the Ohio Central Railroad System, the Columbus & Ohio River was formed in 1992 when Jacobson picked up the old Panhandle Route from Mingo Junction (where a connection was established with the Wheeling & Lake Erie) to Columbus.

The sale also included a former New York Central branch between Hebron and Heath, as well as an ex-PRR branch from Cadiz Junction to Georgetown.  In all, it totaled 162 miles.

At that time, the railroad's headquarters was transferred from Sugar Creek to Coshocton in the heart of Ohio's Amish Country.

The CUOH grew larger in 1996 when it picked up Conrail's 3-mile Neilston Industrial Track (ex-PRR) in Columbus, providing additional customers.  Then, 2001 it acquired more industrial trackage around Columbus from Norfolk Southern. 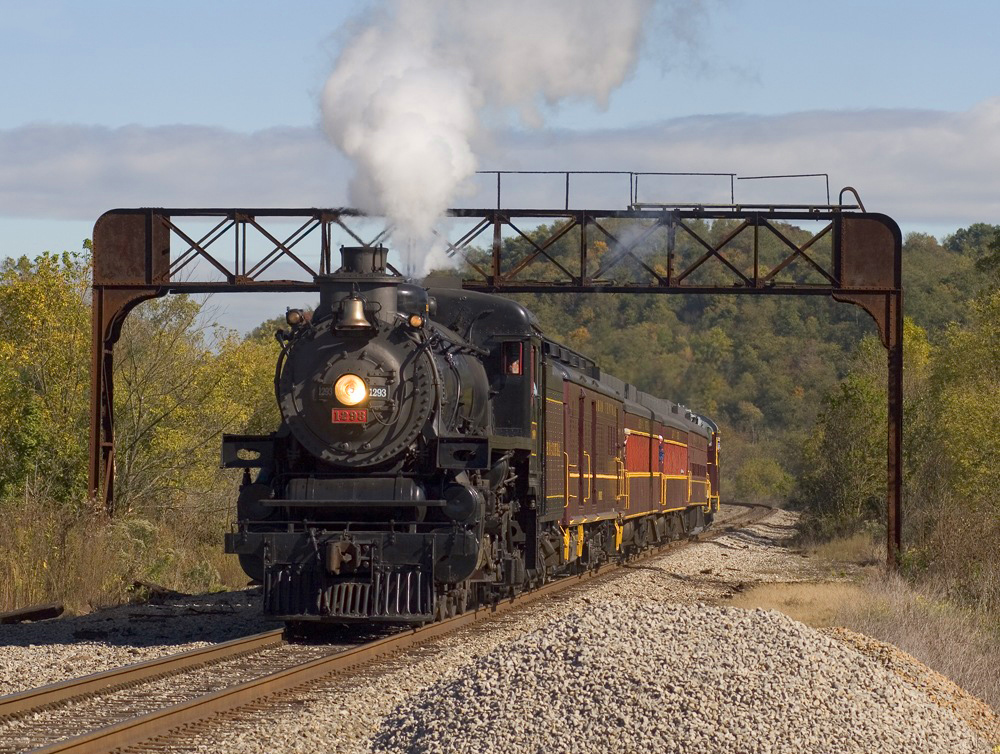 Ohio Central 4-6-2 #1293 leads a chartered special through Jewett, Ohio under a rusting ex-Pennsylvania Railroad signal tower on October 7, 2006. The structure paints a sad picture of the line's former glory. This was the PRR's "Panhandle Route" to St. Louis, once double-tracked and featured dozens of trains everyday. It was downgraded and abandoned in segments by successor Conrail during the 1980's. Wade Massie photo.

Mahoning Valley Railway (MVRY):  The Mahoning Valley was acquired from LTV Steel in 2001 and resurrects the property (Youngstown-Struthers, which was previously the Lake Erie & Eastern Railroad).

Most of the MV is a disconnected former component of New York Central from Bayard (NS interchange) and Minerva Junction (W&LE interchange) to Hopedale where another W&LE interchange is found.   Altogether, the track totals 53 miles.

The old Y&S was owned by Columbiana County Port Authority and Ohio Central's involvement ended in 2006.  Today, it is operated by the Youngstown & Southeastern Railroad, an Indiana Boxcar subsidiary. 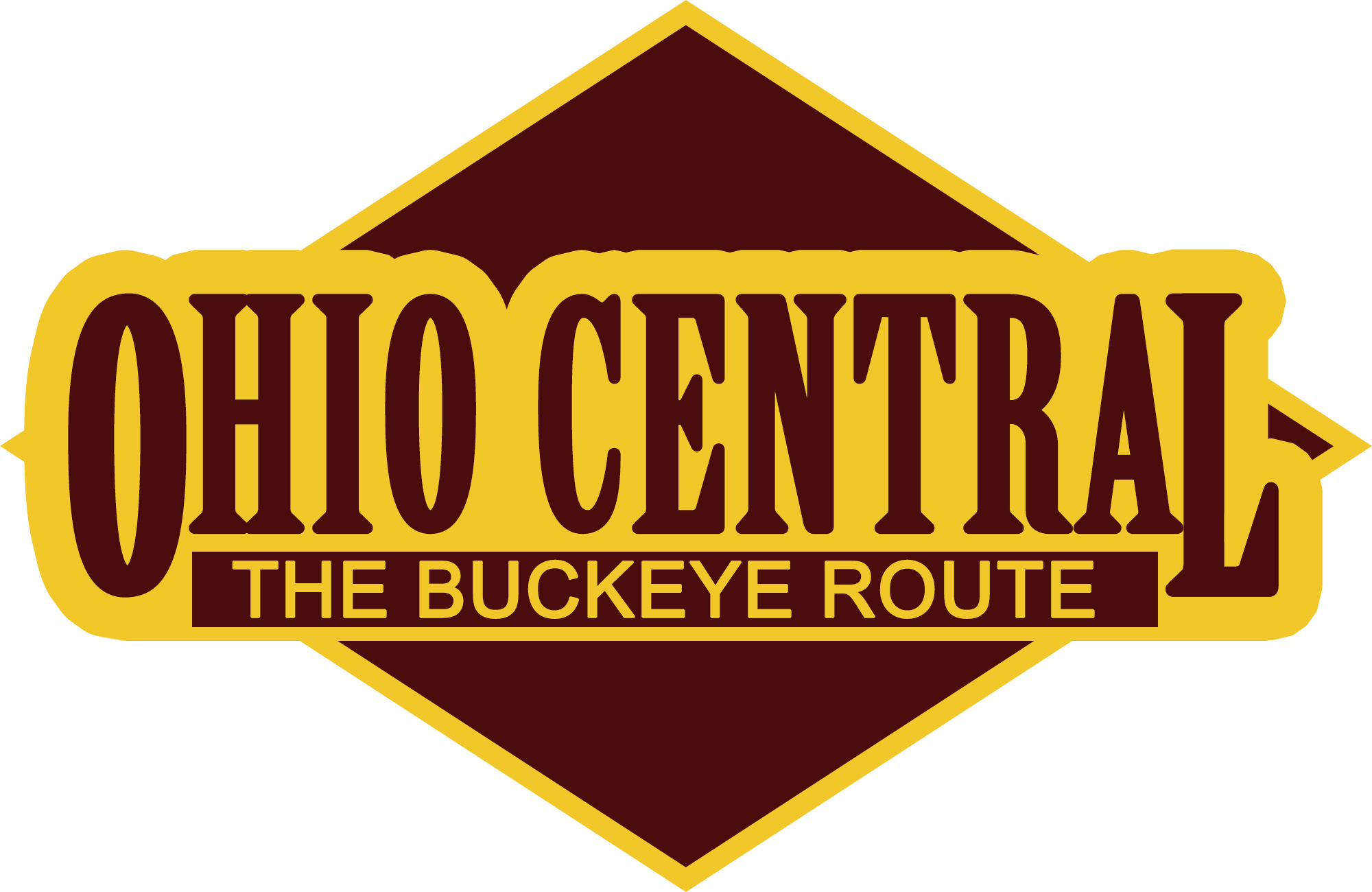 Youngstown Belt Railroad Company (YB):  The Youngstown Belt began service in 1996 when it acquired 45 miles of the former Erie/Erie-Lackawanna main line between Ravenna and Warren.

This included trackage rights south of Warren to Girard and Youngstown, enabling through service to what is now its former Ohio & Pennsylvania Railroad.  It also tied in the system's other small properties in the region, the Warren & Trumbull, Youngstown & Austintown, and Mahoning Valley.

Pittsburgh & Ohio Central Railroad (POHC):  This addition came in 2000 when the Ohio Central picked up the former RailAmerica's Chartiers & Youghiogheny, a 42-mile section running between Neville Island and Arden with service to Walkers Mill.  It is another section of the old PRR Conrail no longer wanted long ago.

Acquired in 2002 with traffic based in chemicals, plastics, metals, minerals and stone it was renamed as the Aliquippa & Ohio River. 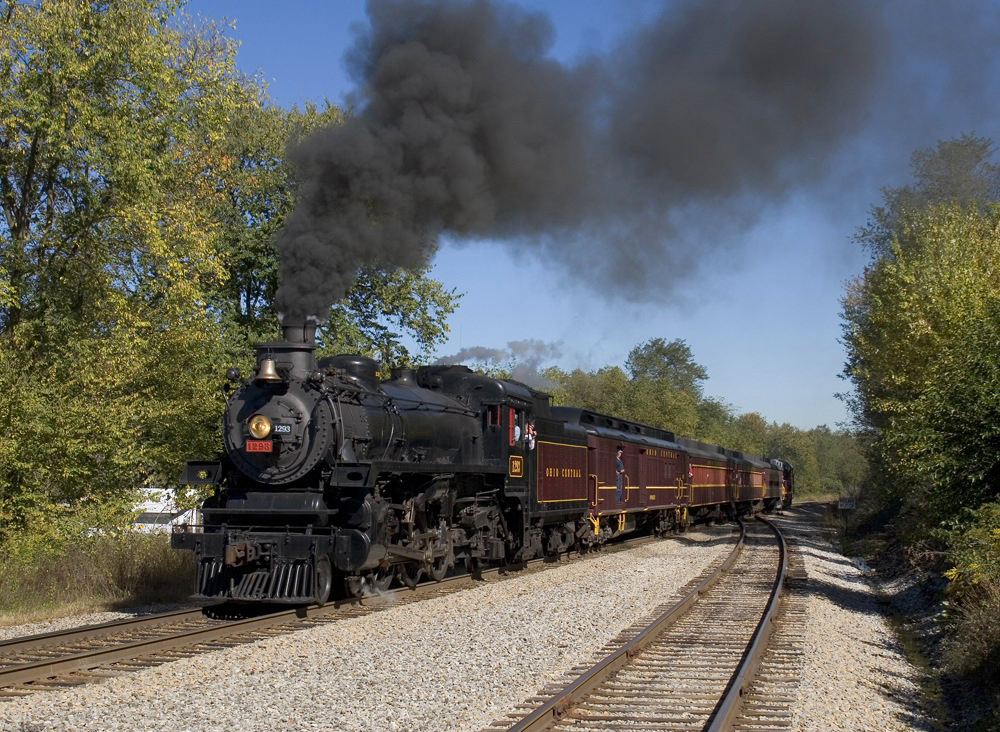 While the freight trains paid the bills perhaps what the OC was best known and recognized for among railfans and the public was its large and continually growing steam fleet.

The railroad just recently acquired former Nickel Plate Berkshire #763 (sister to famous #765) from the Virginia Museum of Transportation and plans are to still in place to one day return it to operation, which will certainly be a sight to see!

The below information reflects Ohio Central's steam fleet at the time of the railroad's sale to Genesee & Wyoming.  All have since been transferred to the Age of Steam Roundhouse and the organization's roster has grown significantly. 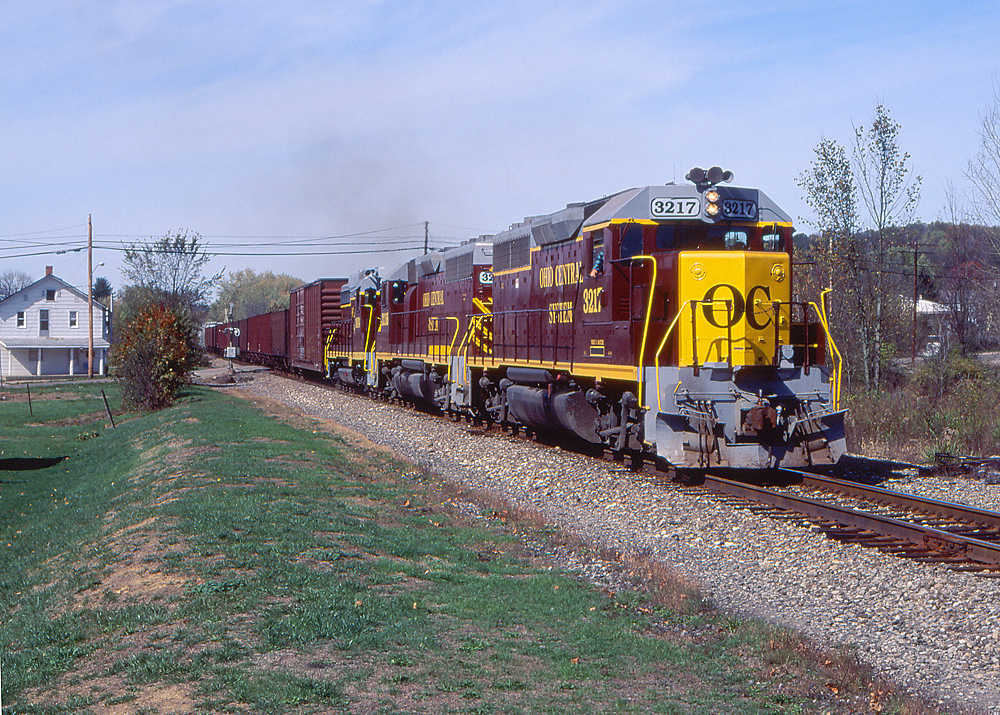 The same train as pictured above, GP40 #3217 is traveling through Scio, Ohio along the Pennsylvania Railroad's former Panhandle line on October 17, 1995. Wade Massie photo.

After the G&W takeover of the railroad it was announced that founder Jerry Jacobson "will retain rights to operate his steam locomotives and passenger cars on the property. Sources say he will build a roundhouse near his home in Sugar Creek, Ohio to stable the steam locomotives" according to Trains Magazine.

Alas, Mr. Jacobson sadly passed away on September 13, 2017 at the age of 74.   His legacy lives on in the multi-million dollar roundhouse he built.

While the Ohio Central has become yet another fallen flag the G&W has pledged to continue the high quality of service the railroad was known for.

So, if you are near Ohio’s Amish country or anywhere else in northeastern Ohio or western Pennsylvania you should certainly look up one of the OC's former lines, it was certainly a very interesting railroad.

Also, if you are photographer now is the time to get your shots of locomotives in OC paint before they disappear into G&W's orange, yellow and black.