Farmrail's trains run on a limited basis only; what is known as the Quartz Mountain Flyer operates from July to November where guests can enjoy a relaxing experience within restored, streamlined cars.

They are quite popular, hosted in conjunction with the Lone Wolf Greeters.

Similar outings at the Oklahoma Railway Museum are not as fanciful although they carry their own appeal with a longer operating season (April through August) and many rides tailored to kids.

Historically, Oklahoma's railroads have been known for moving large quantities of agriculture.

As a result, many branch lines were built to serve numerous farms and related businesses throughout the state.  Historian John Stover's book, "The Routledge Historical Atlas Of The American Railroads," notes THAT some 6,572 miles were in use by 1920.

Unfortunately, much of this infrastructure was lost after World War II as railroads lost market share to trucks and other transportation modes.  Today, the Association of American Railroads points out just 3,158 miles remain. 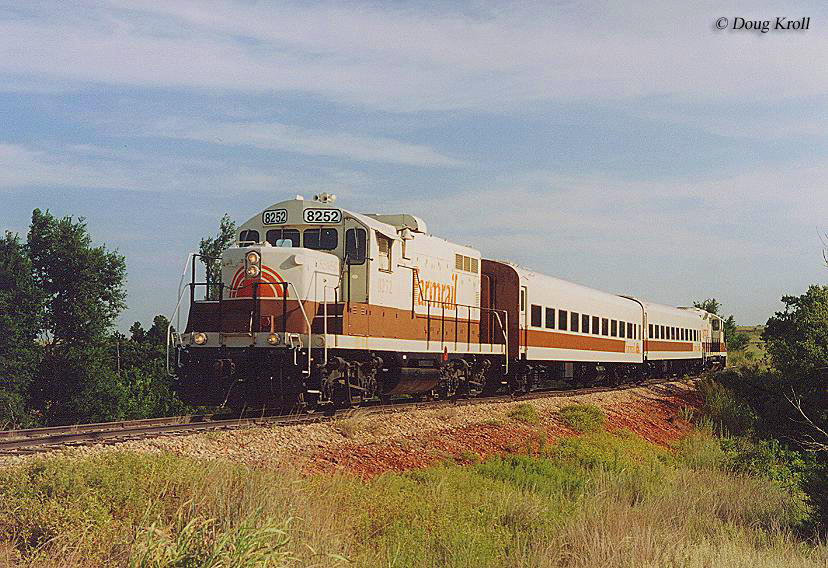 A Brief History Of Oklahoma Railroads

Railroading in what was long referred to as simply "Indian Territory" began generations before Oklahoma joined the Union.  Its genesis can be traced back to a predecessor of what became the modern Missouri-Kansas-Texas Railroad.

According to the book, "Katy Power: Locomotives And Trains Of The Missouri-Kansas Texas Railroad, 1912-1985" by authors Joe Collias and Raymond George, Jr., trains arrived here during the Civil War when the government sought improved transportation for Army fortifications at Fort Riley, Fort Leavenworth, and Fort Gibson.

It was one of three railroads incorporated for the purpose of connecting these forts by rail, along with Fort Smith in Arkansas (never accomplished).

The first to complete the task and reach Indian Territory (the state of Oklahoma after November 16, 1907) would be declared the winner.

The UPRSB had reached Burlington, Kansas by February of 1870.  Just three months later it was renamed the Missouri, Kansas & Texas Railway (MK&T).

It also maintained a long agricultural branch into western Oklahoma.  The MK&T received its nickname, the "Katy," during Jay Gould's control.  When he acquired the Missouri Pacific, Gould made a corporate change with the Missouri, Kansas & Texas as MP's MK&T Division.

This was abbreviated to "K&T Division" in printed timetables which led to the nickname "KT" or "Katy."  The modern MKT was created on April 1, 1923 when the Missouri-Kansas-Texas Railroad was formed to acquire the MK&T's assets.

In its modern incarnation, the Katy proved a successful, albeit small southern Midwestern railroad, surrounded by much larger systems like the Chicago, Burlington & Quincy; Chicago, Rock Island & Pacific; Southern Pacific/St. Louis Southwestern; and others.

After a long and generally successful corporate history, the Katy was acquired by Union Pacific in 1988.  To learn more about its heritage please click here.

This museum is housed inside the town's restored brick depot built by the Chicago, Rock Island & Pacific.  It houses a collection of artifacts related to the area while you can also ride the Heritage Express Trolley located nearby.

Farmrail, based in Clinton, is an employee-owned freight railroad that operates nearly 200 miles of trackage.  The short line began service in 1981.

Along with its freight operations, the carrier hosts an excursion, known as the Quartz Mountain Flyer, that takes passengers up to the Quartz Mountain Resort. For more information about riding the train please call 580-323-1234.  To learn more please visit Farmrail's website or click here. 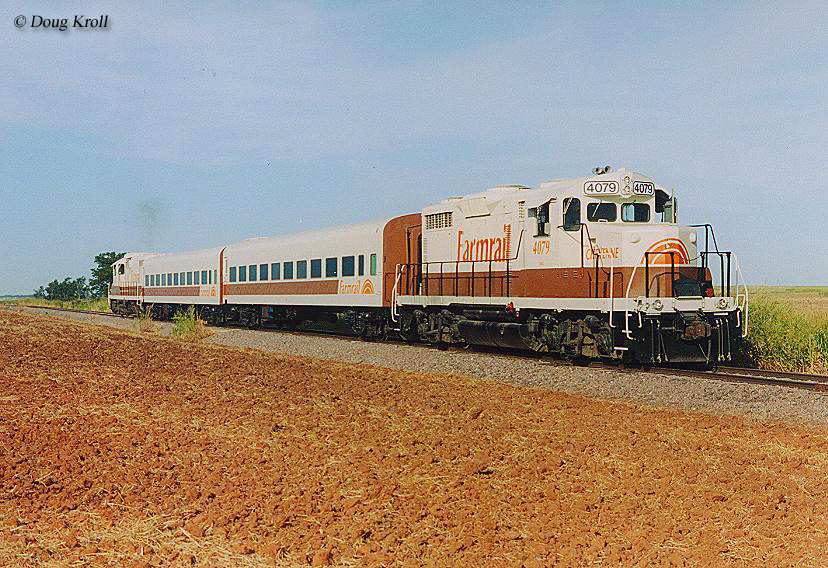 This museum is based inside the large, restored brick depot at Hugo maintained by the Choctaw County Historical Society.  The building was long used by the St. Louis-San Francisco Railway.

The organization tells the region's fascinating history, including the role railroads played in its development.  Inside are many artifacts and displays (railroad and otherwise) as well as an operating model railroad layout.

The Heritage Express Trolley, located in El Reno, operates an historic J.G. Brill streetcar from Heritage Park, located on the grounds of the Canadian County Historical Museum.  This trips run into the downtown area.  It is available to ride on select days throughout the year.

This small railroad attraction, located in Covington, features several operating layouts in various gauges (including a garden railroad) along with a hobby shop to peruse.  The facility is open most weekdays.

The Oklahoma Railway Museum based in Oklahoma City looks to highlight the state's railroad history. Along with a wide collection of preserved equipment the museum also operates scenic train rides on a short stretch of track once owned by the Missouri-Kansas-Texas.  To learn more please visit their website.

This tourist attraction, located in Oklahoma City, has a wide range of activities, from carousel rides to zip lining.

They also operate a 1/3rd-scale train, pulled by a replica steam locomotive that features open-air cars for visitors.

"...a 25-minute one-mile trip around the farm, traveling along the dam of Hidden Lake, circling the beautiful Wedding Garden and down by two ponds with their sparkling fountains before returning to the Train Station."

This museum is located in Enid and features a large collection of rolling stock, which includes St. Louis-San Francisco (Frisco) 4-8-2 #1519, a 1925 product of the Baldwin Locomotive Works.

Additionally, they house a large collection of memorabilia inside, including various artifacts, documents, and photos primarily related to the railroads which served Oklahoma.

Finally, be sure to check out their gift shop and/or ride their excursion train.  To learn more please visit their website.

While not actually a railroad museum (their featured subjects range from space exploration to aviation history) the Science Museum of Oklahoma, located in Oklahoma City, does have an exhibit highlighting trains.

There is a operating model layout (1,000 feet in length) along with a handful of dioramas on display.  Additionally, the museum has a fully restored Pullman parlor car to view.

This museum is housed within the town of Waynoka's beautifully preserved Santa Fe station built in 1910.  The Waynoka Historical Society acquired the building in 1995.

The restoration of the facility continues today although the museum is open to the public during select days each week, free of charge.  Aside from rail exhibits they also feature other displays related to the local area. 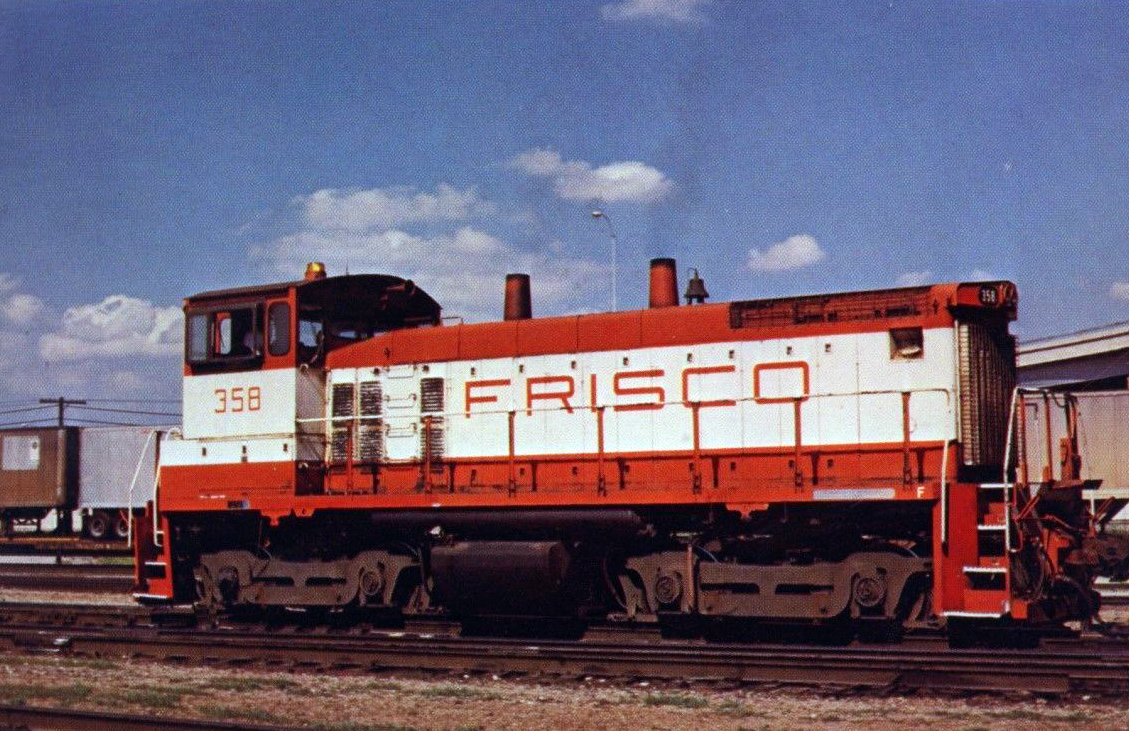 This small railroad museum is named after the Yukon's Best flour mill nearby.  It is located within former Rock Island boxcar #5542 situated on 3rd and Main Streets in the small town of Yukon.

The facility is open by appointment only and contains a small collection of artifacts, photos, and documents related to both the classic Rock Island system as well as railroading in general.

Admission to the museum is free although donations are accepted.  If you are interested in stopping by please call 405-354-5079.