In the late 1940s the Milwaukee Road introduced the Olympian Hiawatha, the transcontinental version of the railroad’s very popular fleet of Hiawatha passenger trains.

The original version of the train was the Twin Cities Hiawatha, which began operating between Chicago and the Twin Cities on May 29, 1935, one of the first streamlined trains ever to be introduced in the U.S.

For the Milwaukee Road, the Hiawathas were virtually the only streamlined passenger trains run by the railroad (they certainly were the most popular and well-remembered) with the rest operated in conjunction with Union Pacific.

Originally powered by 4-4-2 Atlantic-type steam locomotives (later 4-6-4 Hudson-types) the train was entirely streamlined, including the locomotive, and home-built in the Milwaukee’s own shops.

These trains became instantly successful and regularly cruised over 100 mph with nary a bump or shudder during the ride (both trains could make the jaunt between the two cities in roughly six hours). 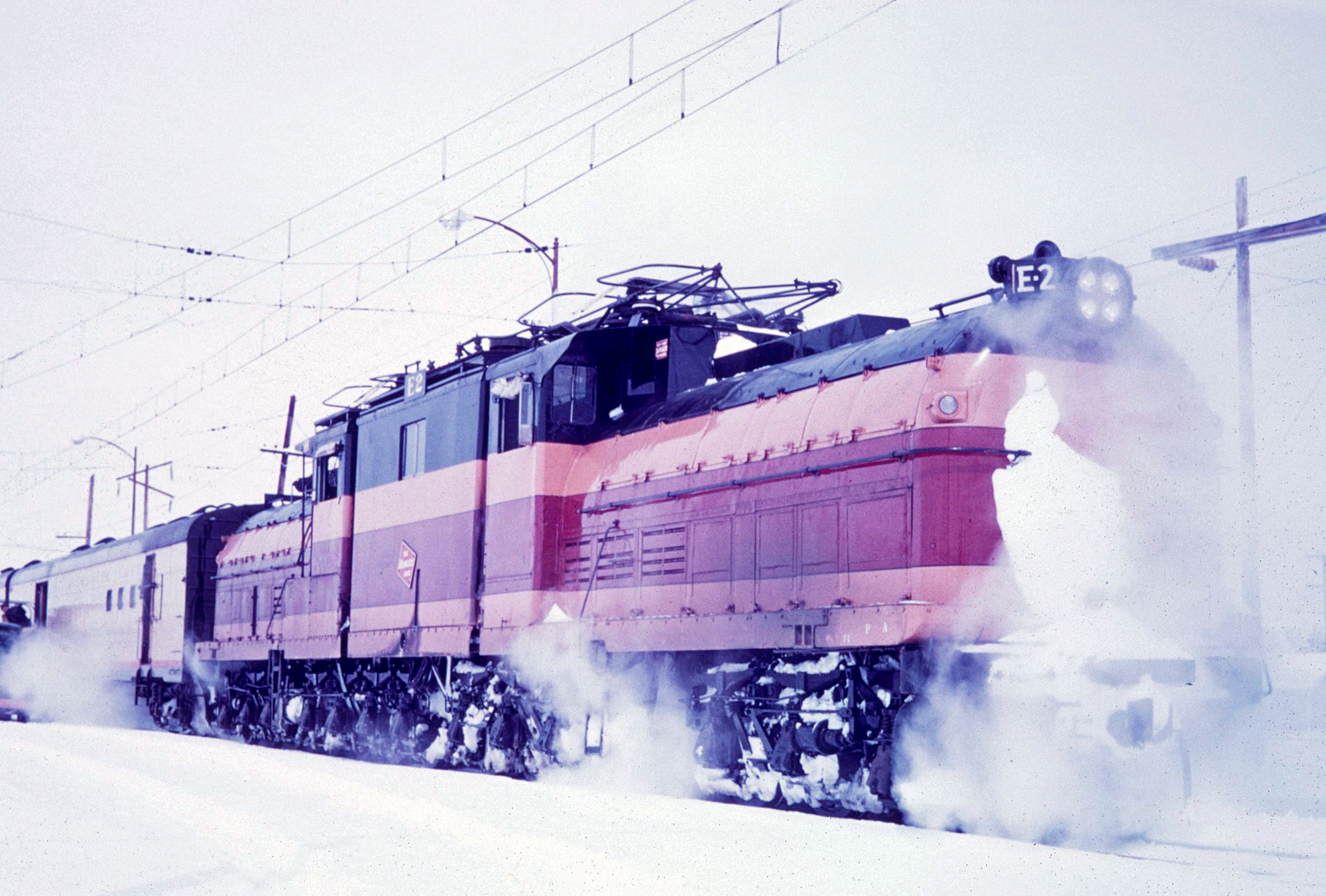 Milwaukee Road "Bi-Polar" E-2 is stopped at Butte, Montana with train #16, the eastbound "Olympian Hiawatha," on a winter's morning in 1958. American-Rails.com collection.

These regional trains offered by the Milwaukee Road became so successful that the railroad found itself short on demand and to meet such eventually operated two versions of the train, the Morning Hiawatha and the Afternoon Hiawatha.

There were eventually four versions of Milwaukee Roads’ regional Hiawathas.  These included: 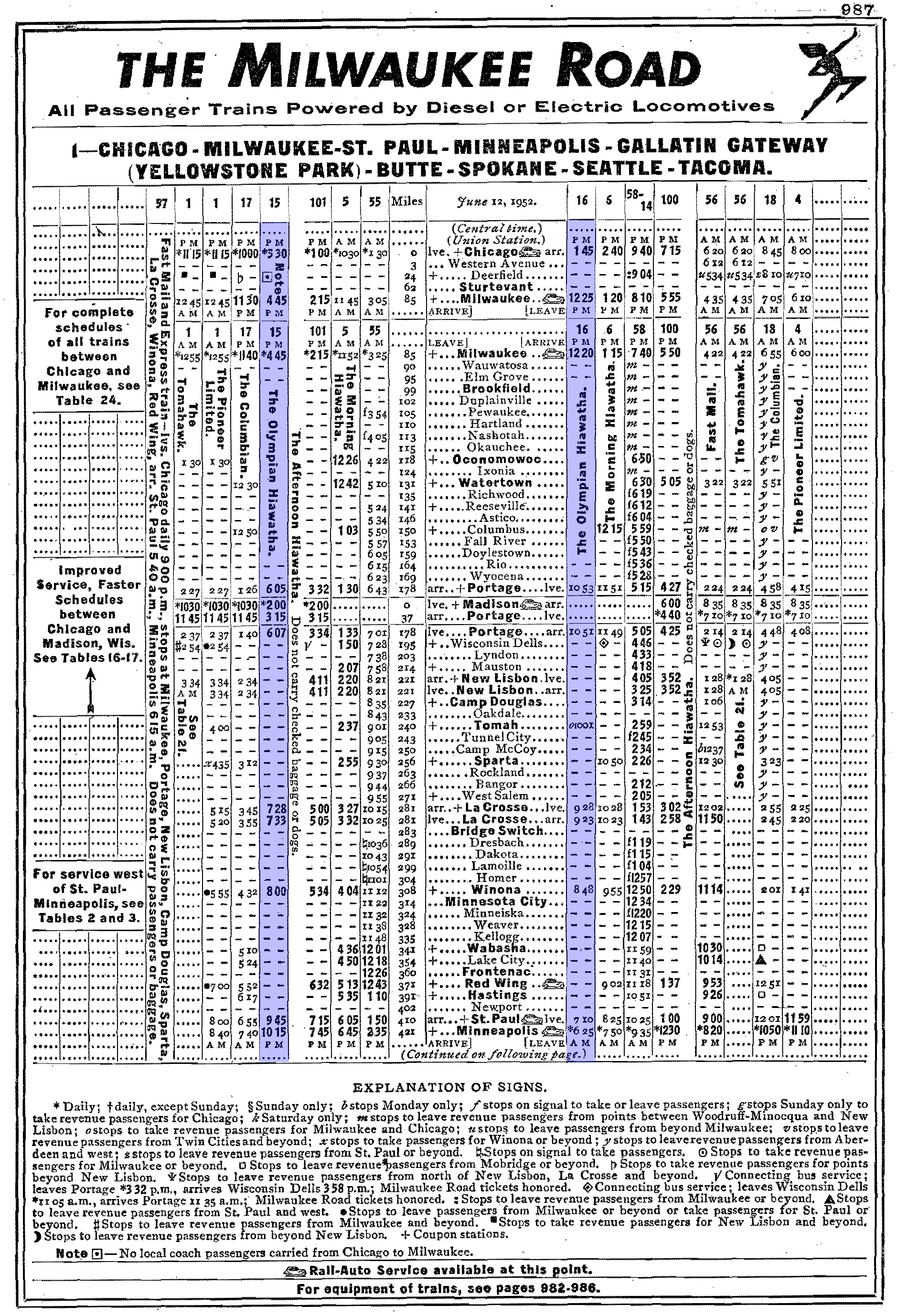 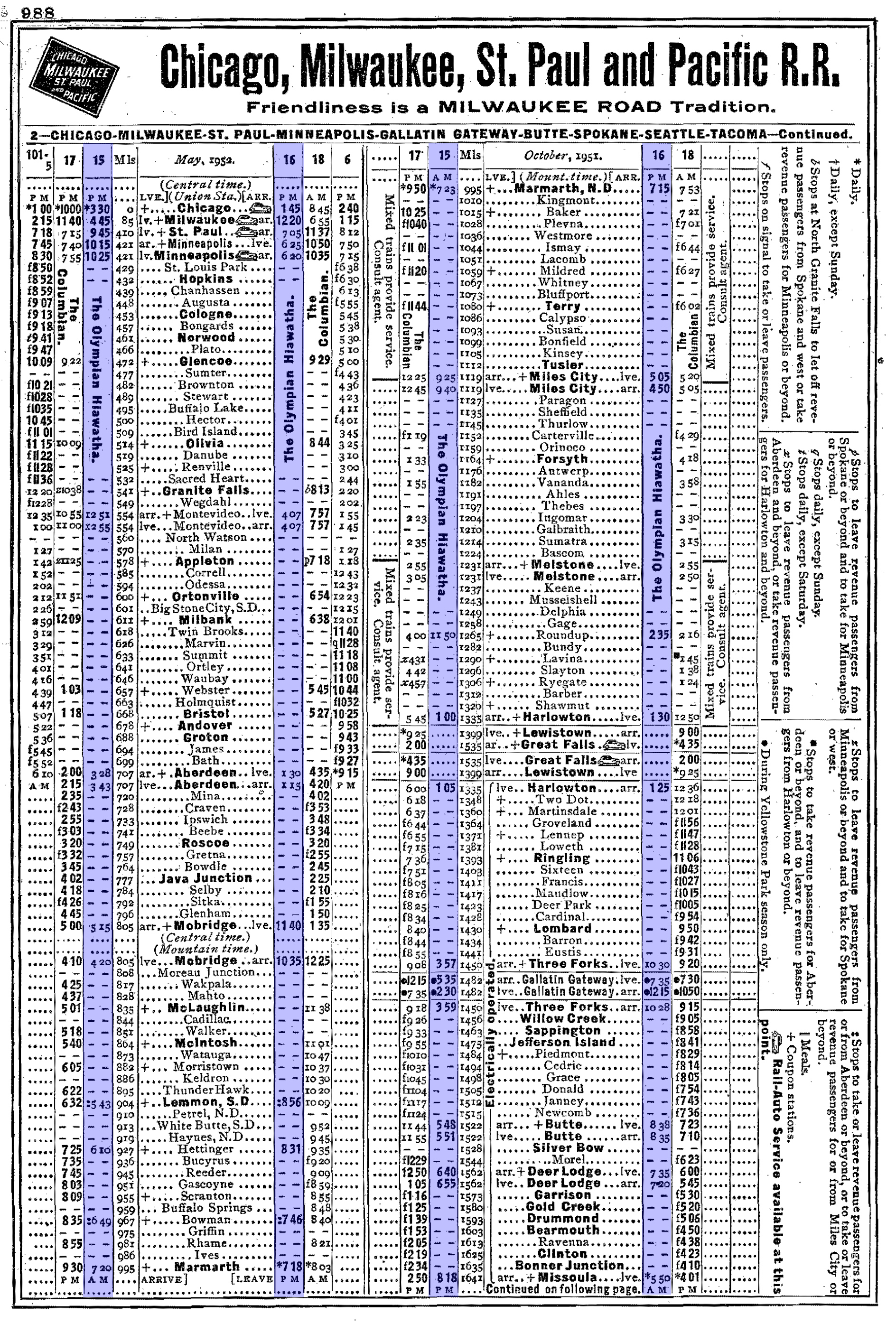 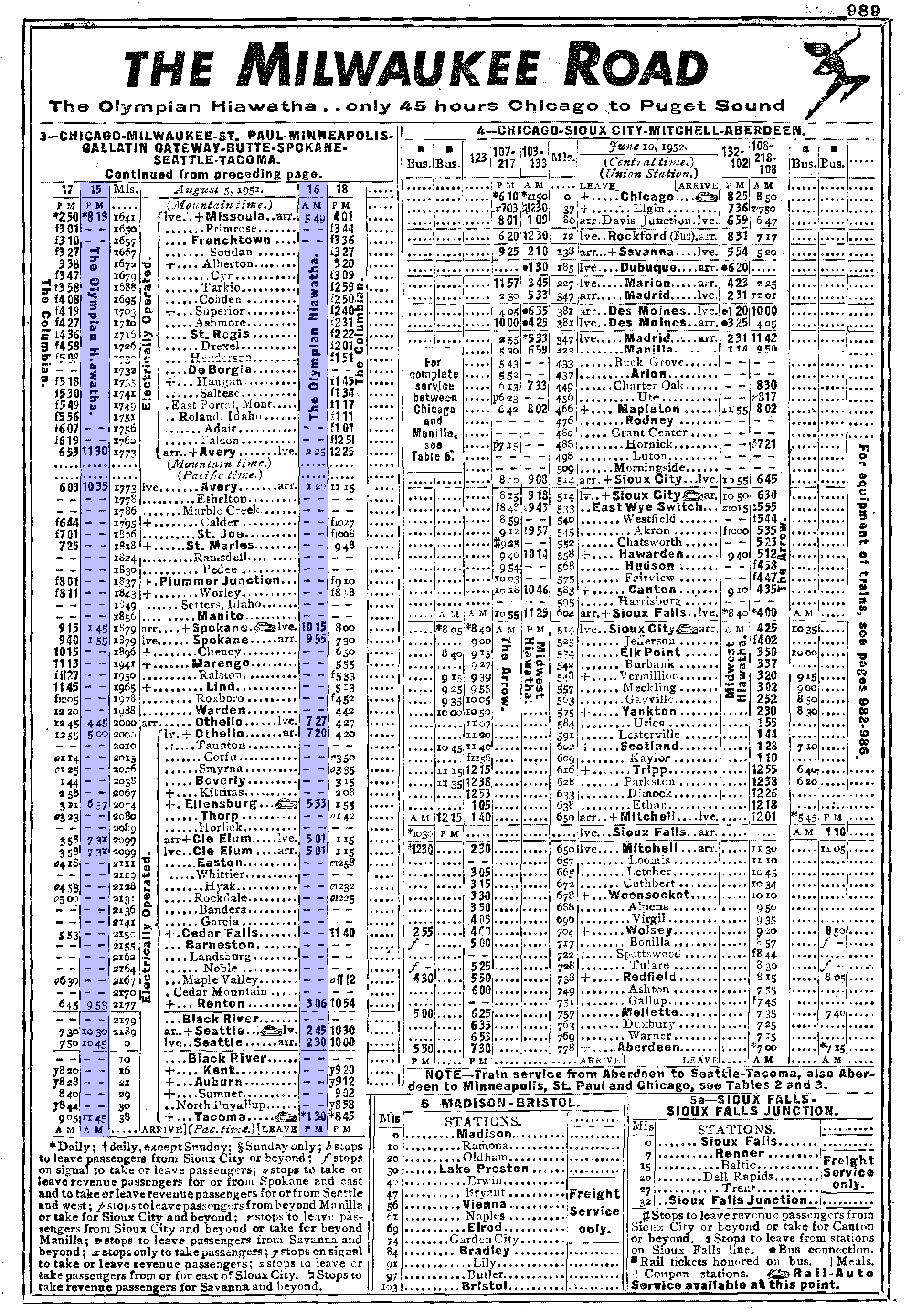 With the success of its regional Hiawathas, in 1947, about twelve years after the railroad first launched its Hiawatha the railroad introduced the streamlined Olympian Hiawatha, a train meant to fully compete with the Great Northern and Northern Pacific for rail travel to and from the Pacific Northwest.

- The Milwaukee had operated the Olympian and Columbian since 1911 over its Pacific Extension but these trains used heavyweight equipment and were pulled by conventional steam locomotives. - 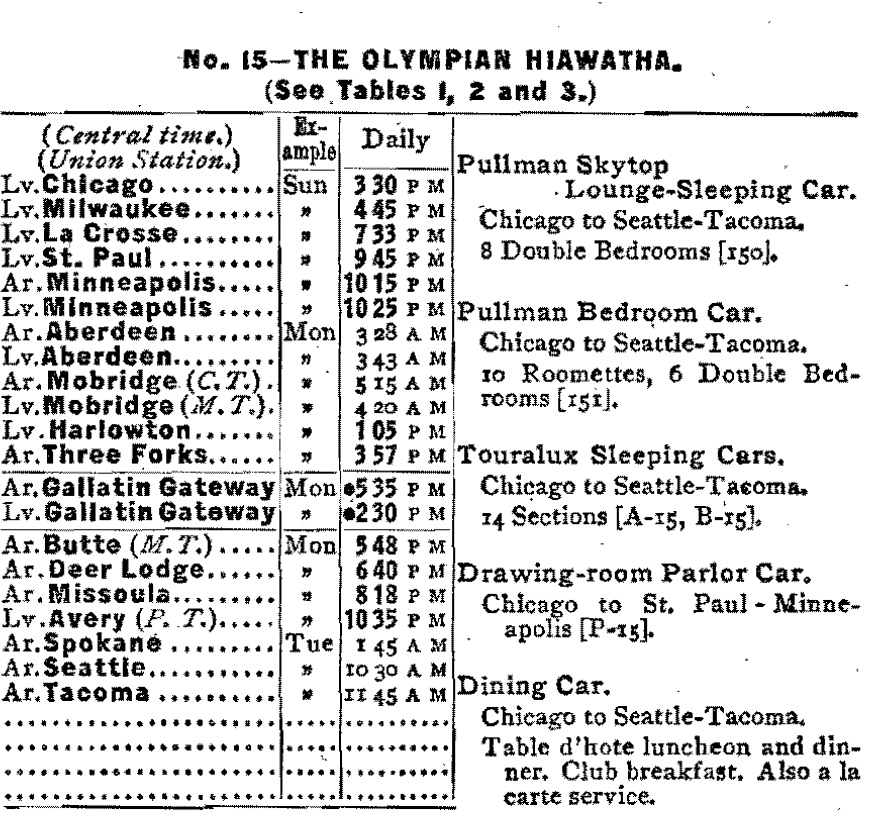 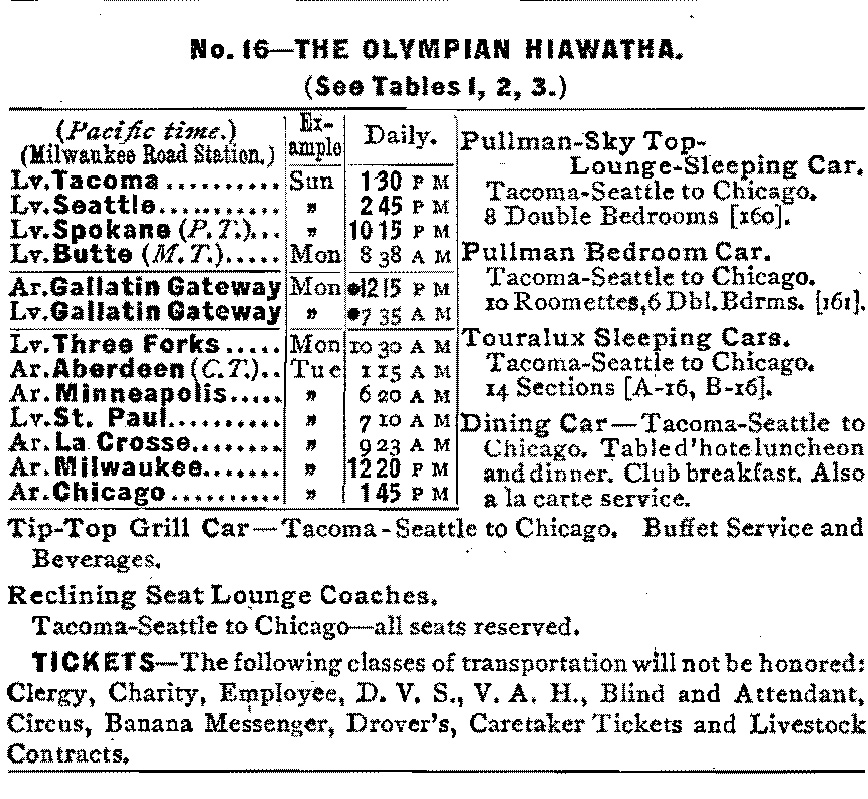 However, it was Brook Stevens, who designed the celebrated Sky Top sleeper-lounge observations (perhaps the most distinctive and dramatic observation cars ever built) that created the Milwaukee Road’s Olympian Hiawatha.

The train featured passenger equipment (save for the cars purchased from Pullman) entirely home-built by the railroad’s own shop forces, which along with the beautiful Sky Top observations included cars such as the Super Domes, which allowed for full car-length, panoramic viewing.

When the train initially began on June 29, 1947 it included a mix of heavy and lightweight cars but by 1949 when the Pullman equipment arrived it was an entirely streamlined, lightweight train. For power the train featured Erie-Built, diesel locomotives manufactured by Fairbanks-Morse.

These locomotives were originally designated to handle the train between Minneapolis and Tacoma, even in electrified territory, according to Jim Scribbins' book, "The Milwaukee Road Remembered."  However, they were eventually replaced with electrics between Harlowton, Montana and Avery, Idaho and then again between Othello, Washington and Seattle. 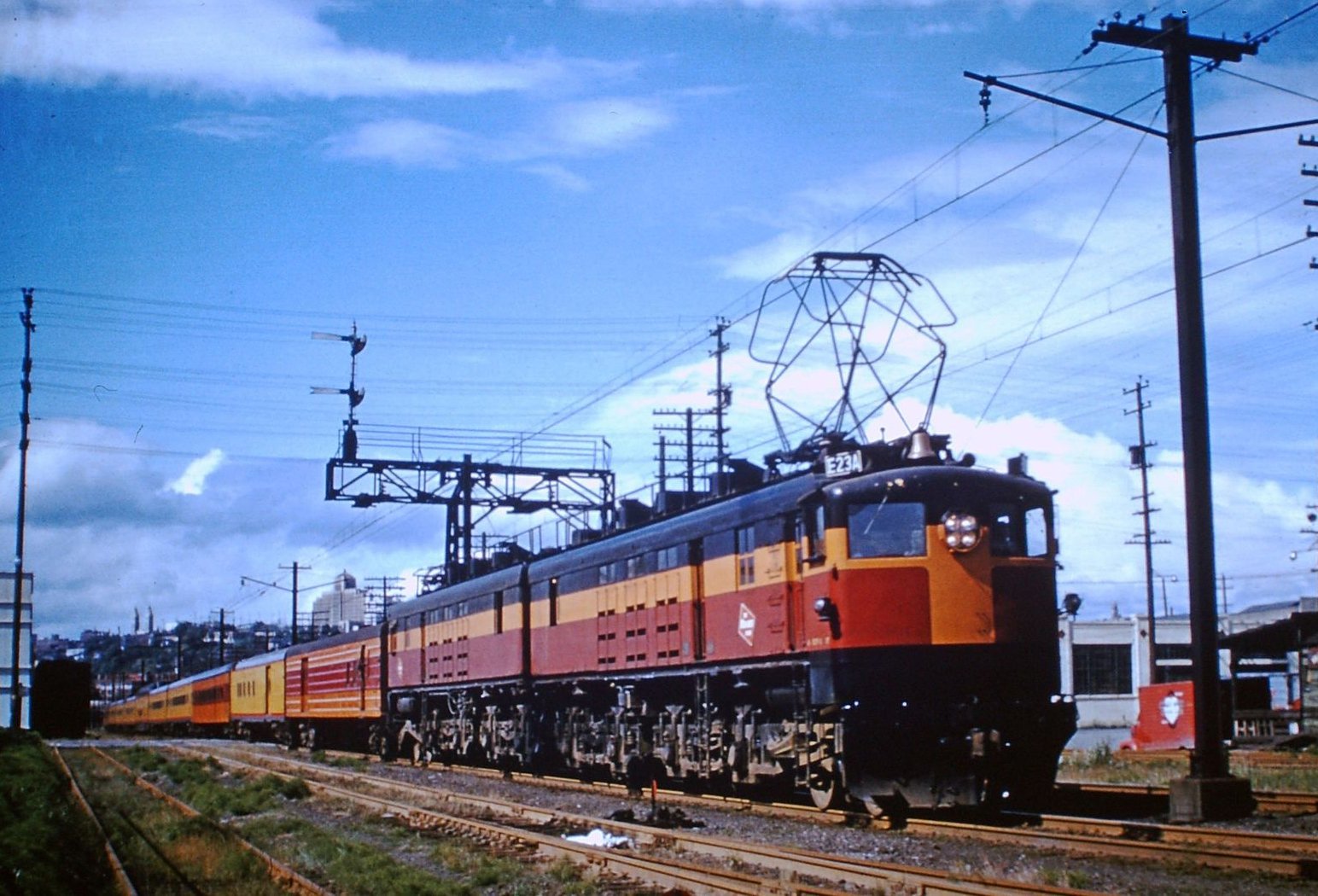 Milwaukee Road's train #16, the eastbound transcontinental "Olympian Hiawatha" (Seattle/Tacoma - Twin Cities - Chicago) departs Seattle behind boxcab set E-23 on June 10, 1956. By the date of this photo the railroad was switching its passenger livery to Union Pacific's Armour Yellow as the two began partnering between Chicago and Omaha in October, 1955. Stan Kistler photo.

While aesthetically quite stunning with added touches by Brooks Stevens of a chromed-nose design with “Olympian Hiawatha” adorning the locomotive along its forward flanks, the Erie-Builts were not very reliable, which led to their replacement.

Sadly, the train lasted a mere 14 years and the Milwaukee Road bowed out of the Pacific Northwest market, canceling the train in May of 1961.

Interestingly, while the railroad claimed lack of ridership on the Olympian Hi thanks to historian Michael Sol's exhaustive research it actually appears the Milwaukee saw the writing on the wall early and simply wanted to rid itself of the unprofitable train (the railroad saved about $2.1 million annually for doing so). 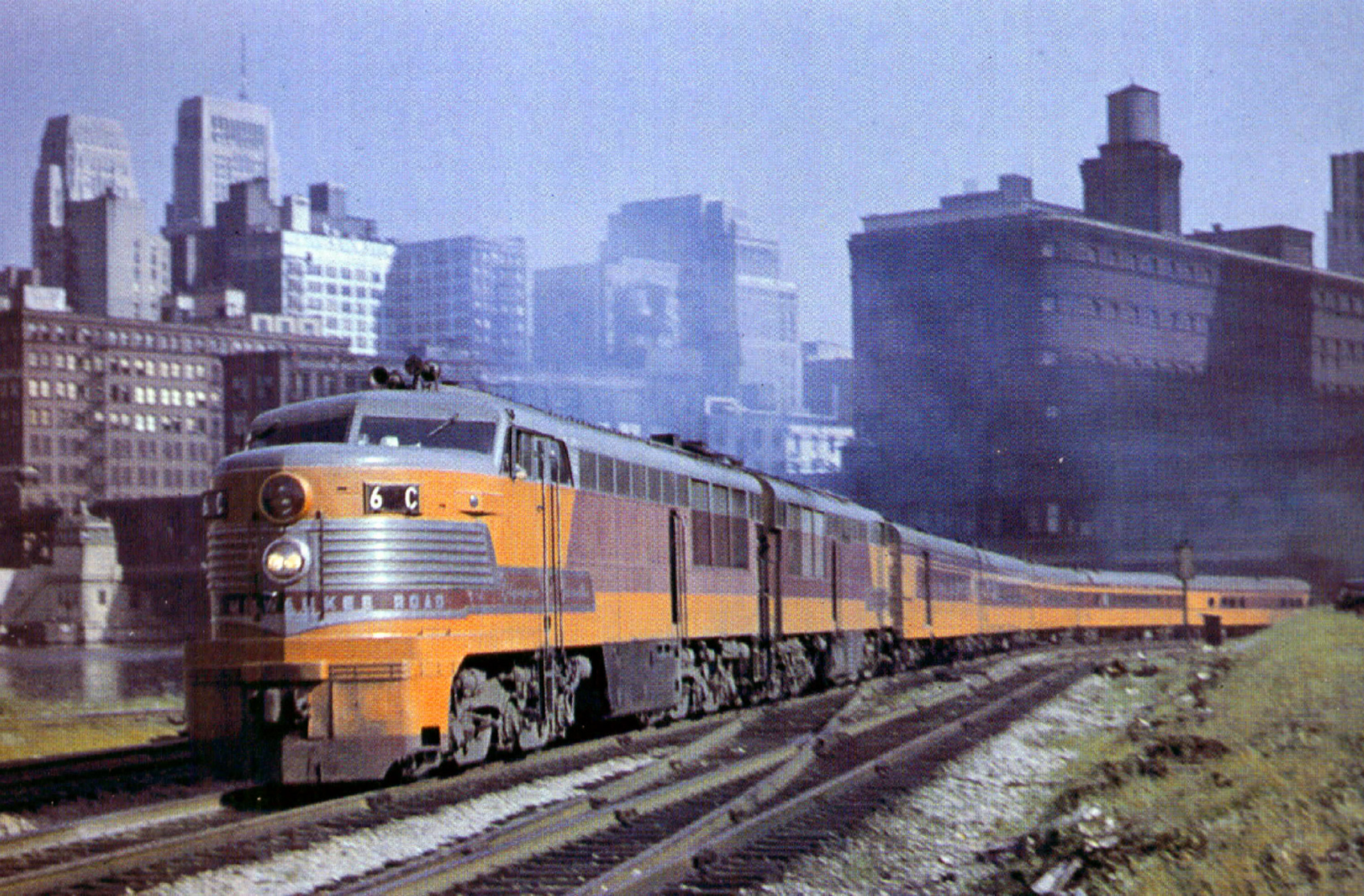 An A-A set of Milwaukee Road "Erie-Built's" appear to be near Chicago's Union Station with the "Olympian Hiawatha" in the 1950s.

Also of interest is how well each of the three lines actually fared from an operating standpoint.  According to railroad historian and civil engineer Michael Sol, the ICC's official statistics from 1959 contain the following operating ratios for passenger service:

That same year the Milwaukee earned $3.3 million in gross revenues for the Olympian Hi alone while the Northern Pacific earned $6 million for its entire fleet and the Great Northern $10 million. 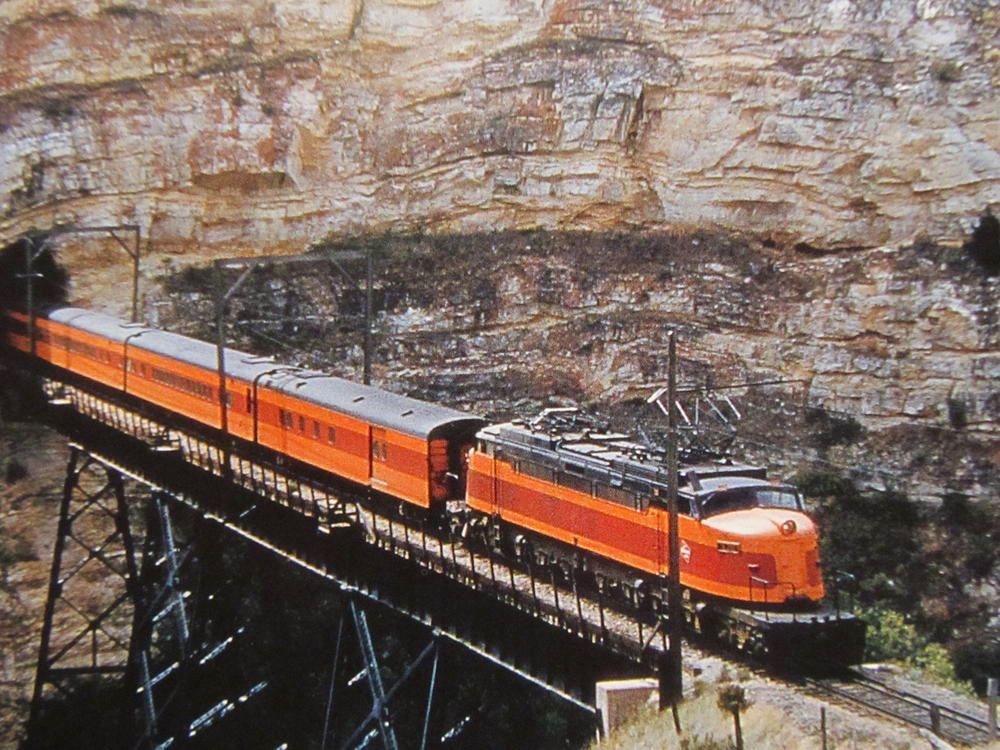 Perhaps of greater note here is that, in actuality, the three railroads did not really "compete" with their transcontinental services as all served different intermediate points between Seattle and Minneapolis/Chicago.

Additionally, by the time the Olympian Hi was launched there were increasingly fewer passengers riding  these trains the entire way (Seattle - Minneapolis/Chicago); most boarded or de-boarded somewhere in between. 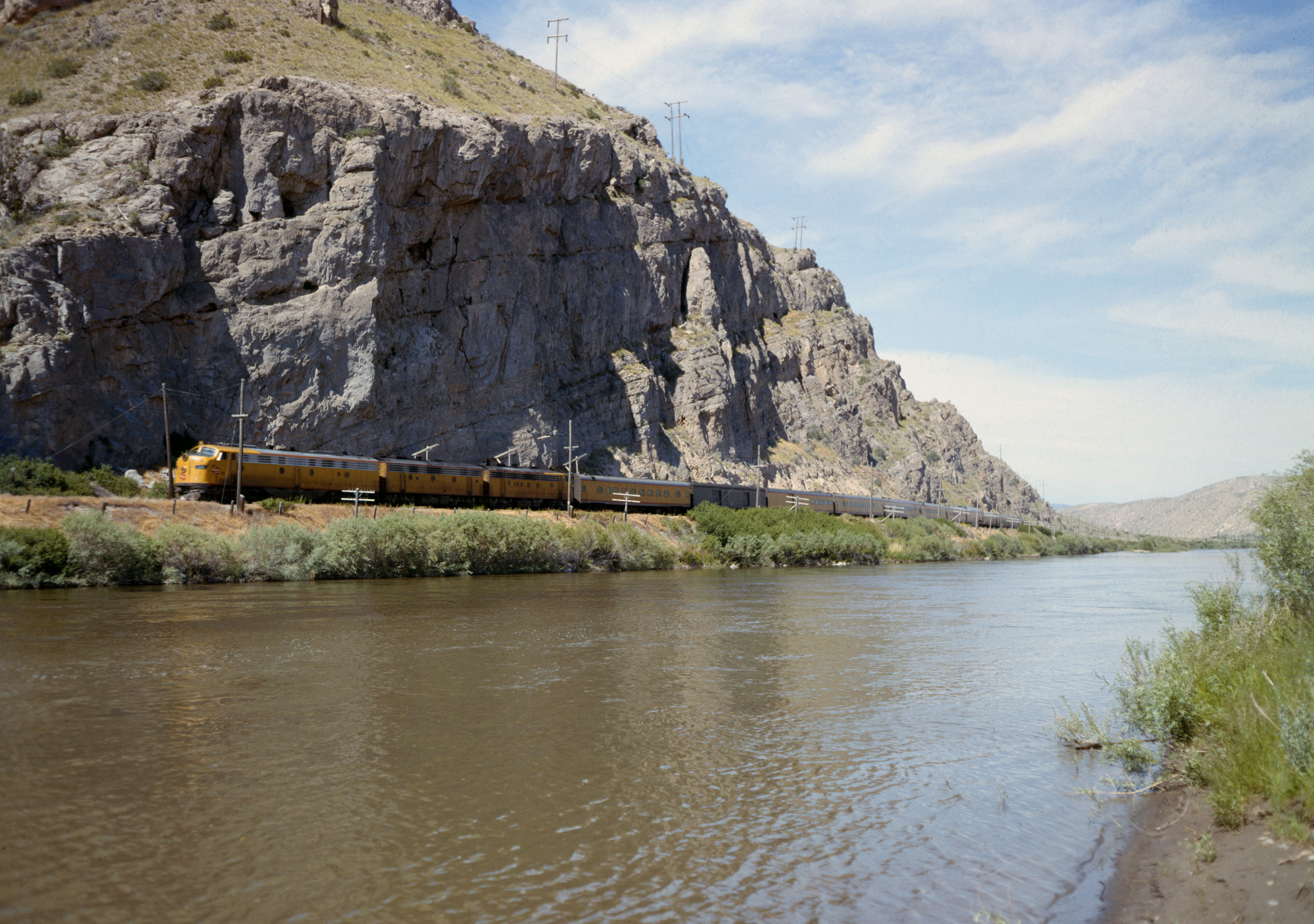 From a railfan's and historian's (and even a traveler of the time period) perspective it's a shame that the Olympian Hi was canceled so early considering it operated through some of the most stunningly beautiful areas of the country.

In any event, today, while Amtrak carriers on the legendary Hiawatha service, to some degree, offering Hiawatha regional trains between Milwaukee and Chicago, the Olympian Hiawatha and the route it traveled are sadly relegated to history and the memories of those who were lucky enough to ride it.

In the 1970s the Milwaukee Road began making dumbfounding managerial decisions that ultimately led to the railroad’s undoing in the late 1970s and subsequent abandonment of all lines west of Terry, Montana.