The Seaboard Air Line's strategic system that connected central Virginia with Florida enabled its passenger trains to remain popular far longer than most others as folks found the speed, comfort, and relaxation of rail travel a convenient means of reaching their southerly vacation destinations well into the 1960s.

As a result, trains like the Silver Comet remained strong even after the SAL disappeared until the Seaboard Coast Line.

The Orange Blossom Special, despite its heavyweight status, was one of the railroad's best advertised and well-known trains providing service to Sunshine State during the wintertime months.

First launched in the 1920s the train ran nearly every season through the early 1950s except during the tumultuous and busy war years of the 1940s.  Strong competition from the Atlantic Coast Line and the SAL's other trains eventually forced the Blossom's discontinuance.

The Seaboard Air Line was quick to embrace the streamliner and was the first southern road to do so when it launched the Silver Meteor in 1939, a move which completely surprised competitor Atlantic Coast Line and sent it scrambling to launch its own streamliner ("The Champion").

The SAL's reasoning for the train had as much to do with practicality as it was "wowing" the public.  The railroad had been in and out of receivership throughout the 1930s. 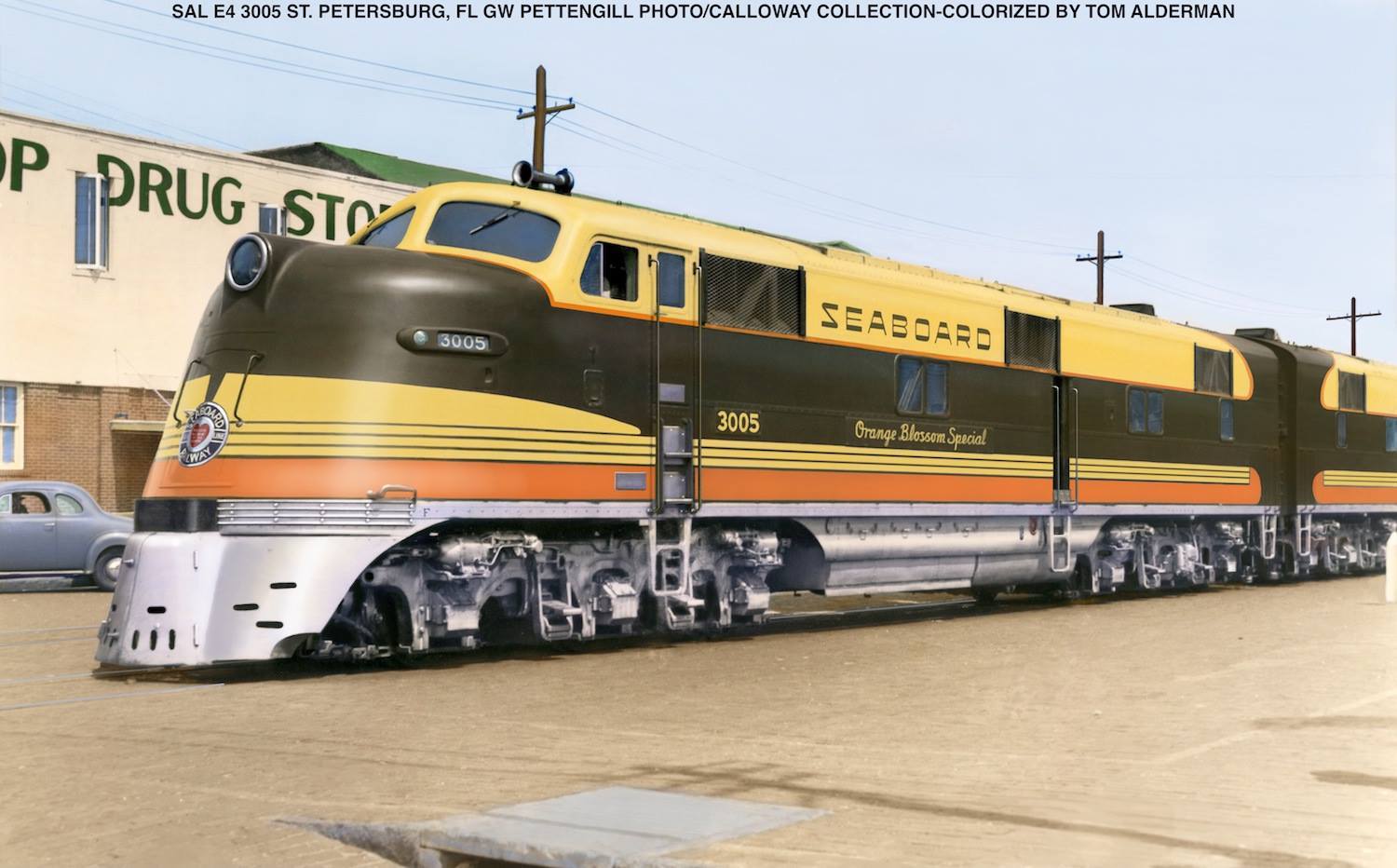 According to Larry Goolsby's book, "Seaboard Air Line Passenger Service, The Streamlined Era," by 1932 the company had witnessed its revenues drop by nearly half its 1929 high of $58 million.

While the Meteor proved a near immediate success the company had also been experimenting with other ways to lure passengers back to its trains. During the 1933-34 winter season the railroad worked with Pullman to reequip the Orange Blossom Special with an entirely air-conditioned consist, the first of its kind in the South.

The train got its start during 1925 and catered towards the wealthy hoping to escape the winter cold of the Northeast for the sunny and balmy tropical weather of South Florida, operating from December through April.

Typical of SAL passenger operations (as well as that of rival ACL), service was a coordinated effort amongst three carriers: departing New York the Blossom traveled over the Pennsylvania as far south as Washington D.C.

From this point the train was handed over to the Richmond, Fredericksburg & Potomac between the nation's capital and Richmond; finally, at Main Street Station the SAL carried the train into Florida offering a trio of terminating points in the Sunshine State.

According to the Blossom's 1941 timetable it offered a southbound consist including a:

The northbound trip provided a similar consist albeit usually running with a few less sleepers.  The SAL closely monitored these consists and if demand was even an issue more cars were on standby (such as an added sleeper or diner). 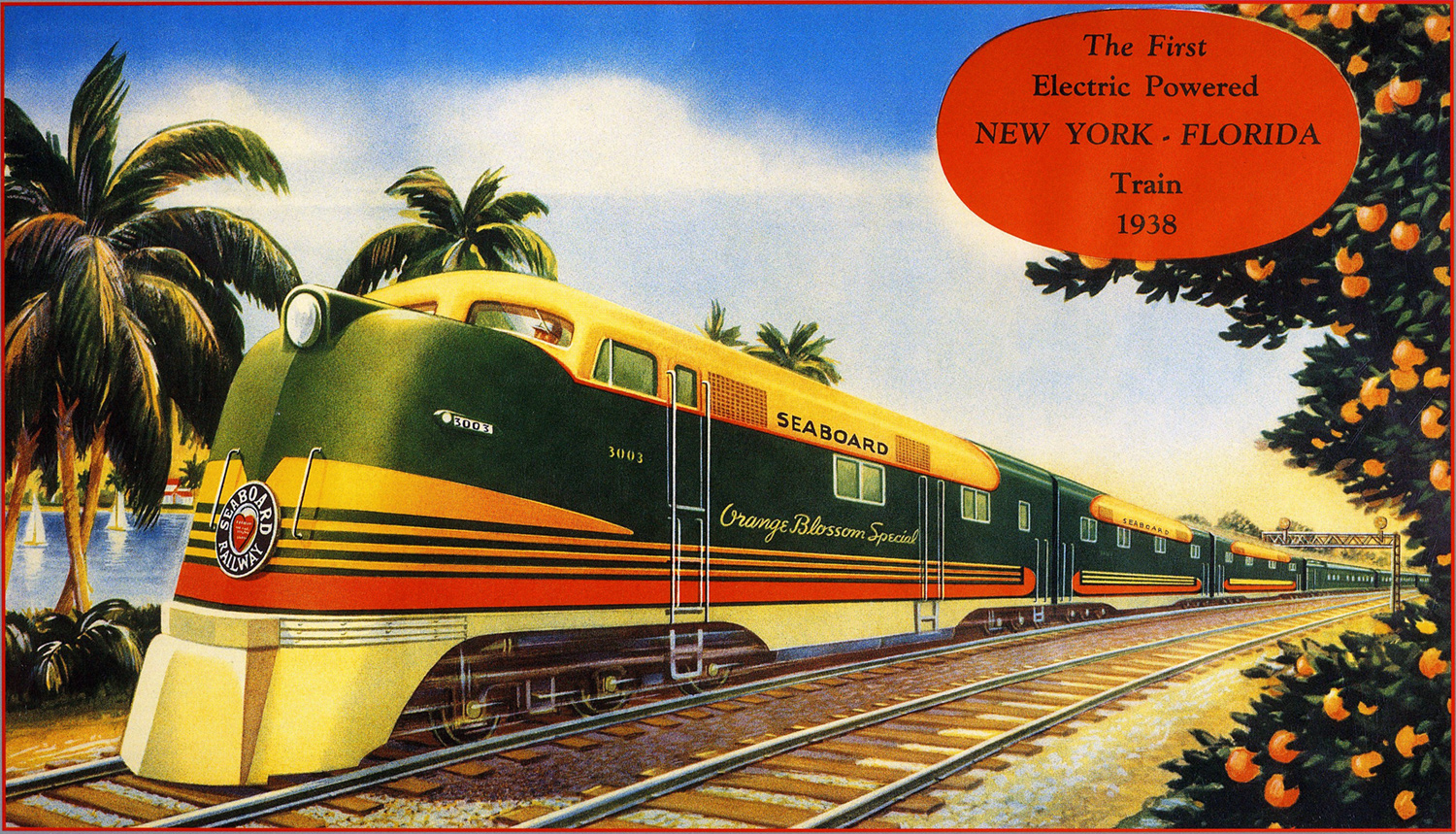 The trip's length normally required a full day to complete; southbound #117/#7 left New York after lunch and arrived in Wildwood, Florida by breakfast the next morning.  From this point the train split into sections reaching Miami and St. Petersburg (via Tampa) arriving at each destination between mid-morning and just after lunch.

The return northbound #8/#138 departed Wildwood late in the evening (individual sections had departed their respective points earlier that afternoon) and returned to New York by mid-afternoon the next day.  According to Mr. Goolsby's book the Blossom's power usually consisted of a Class M 4-8-2 during the steam era, capable of handling around a dozen cars.

In October of 1938 the SAL took delivery of its first Electro-Motive E4 diesels.  These sleek machines were adorned in a beautiful scheme of Pullman green, bright yellow, aluminum, and orange trim that is classically referred to as the Citrus livery.

The colors really did evoke thoughts of Florida citrus groves and to show off the new locomotives, Seaboard assigned them to the Orange Blossom Special for the 1938 winter season, which began just a few months later.

The train earned the high honor of being the first passenger train in the South to operate with diesels and the new power could handle 15 to 17 car consist, five more than the Mountains.  It is fascinating the Blossom carried such high standing considering its heavyweight status and brief period of service each year.

The train regularly splashed the sides of freight equipment, was featured prominently in advertisements, and showcased on all types of print media.  The Seaboard proudly announced it as "Florida's Distinguished Winter Train" and Pullman even painted the cars in their own livery of Chinese red and grey starting in the 1951-52 season.

The Blossom made its final run of World War II during the 1941-42 season, finishing in April until after the conflict was over (sleepers were in high demand for troop trains).  The train returned for the winter of 1946-47.

By this time new lightweight equipment was fast arriving on the Seaboard and it assigned a 10-roomette, 6-double-bedroom car to the train in 1949.  This was the only time, according to Mr. Goolsby's book, that a streamlined car ever ran within the Blossom's consist.

Unfortunately, by then the train was losing patronage against the Coast Line's Florida Sunbeam (the Blossom's direct competitor) and the services provided by more flashy names like the Silver Meteor and Champion.  In response the SAL decided to focus on its flagship and other Floridian trains.

The Blossom's last season was during the winter of 1952-53, making its final run on April 11, 1953.  To read more about the railroad's other trains please visit the Seaboard Air Line section of the site, which can be reached from the top of this page.