The track pan, which went by different names depending upon where it was employed, was a specialized type of water feed system first developed in Britain in the early 19th century and allowed steam locomotives to refill their tenders on the fly, at-speed without stopping.

The idea was simple, to improve efficiency and speed up the schedule by reducing the number of times required to stop and refuel.

Unfortunately, pans proved far more difficult to maintain than originally thought but some larger railroads in the United States continued using them in some form or fashion until the end of main line steam service in the 1950s.

The track pan, commonly known as a water trough in Britain, was first designed by the English in 1859.

A gentleman by the name of John Ramsbottom, who was the Locomotive Superintendent of the London & North Western Railway developed a trough system between the rails that would allow the locomotive's tender, via a specially designed scoop mechanism, to replenish its water supply on the fly without stopping. 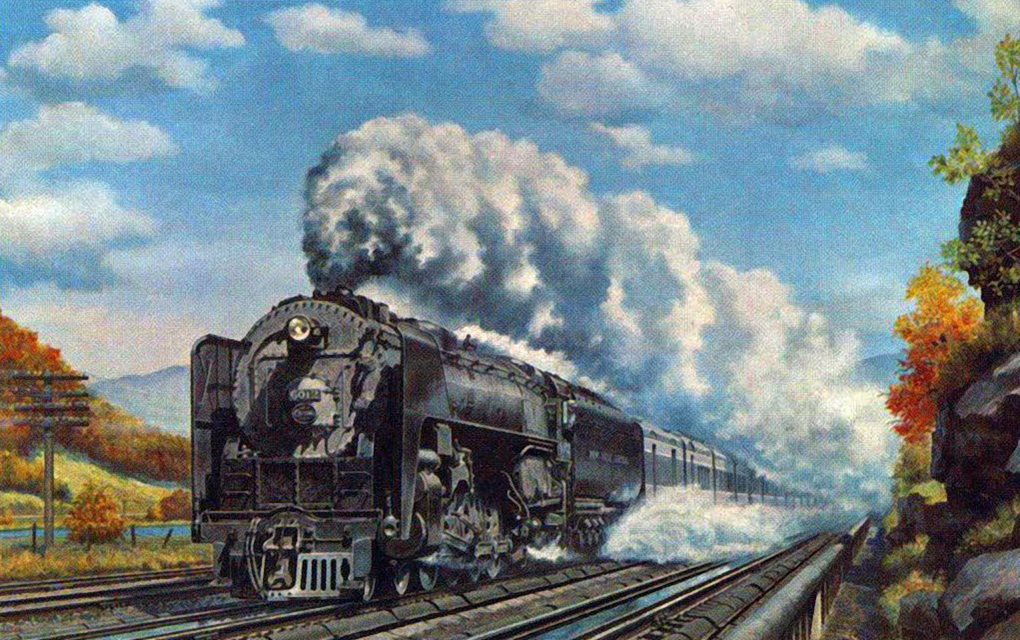 New York Central Class S-1b "Niagara" #6012 is at-speed with the "20th Century Limited" as it scoops water from a track pan along the main line near New Hamburg, New York during October of 1948. Painting by Howard Fogg.

Its initial purpose was to speed up the running time of the Irish Mail, an express train between Chester and Holyhead in North Wales.  The first example was placed into service at Mochdre, Conwy (roughly the halfway point) on June 23, 1860.

Interestingly, American lines did not pick up on the practice for another decade and, ultimately, the Canadians are never known to have employed track pans except on Michigan Central's (New York Central) subsidiary, the Canada Southern Railway, between Buffalo and Detroit in southern Ontario.

According to James Alexander's authoritative article on the subject, "Scooping Water In The Age Of Steam," the New York Central & Hudson Railroad (predecessor to the later New York Central System) is the first American road to use a track pan when it placed one in service at Montrose, New York in 1870.

Based from Ramsbottom's design, it was not long before rival Pennsylvania Railroad put its own pan into service that very same November at Sang Hollow, Pennsylvania.  During the rest of the 19th century several other Northeastern lines began using track pans.

These railroads included the New Haven, Reading, Central Railroad Of New Jersey, and even the Baltimore & Ohio (near Stanton, Delaware along its "Royal Blue" main line connecting Philadelphia and Jersey City, New Jersey).

Throughout its history the Northeast held the greatest concentration of pans due to the fast schedule and running times between the big cities and Midwest (Chicago, Detroit, St, Louis, etc.). 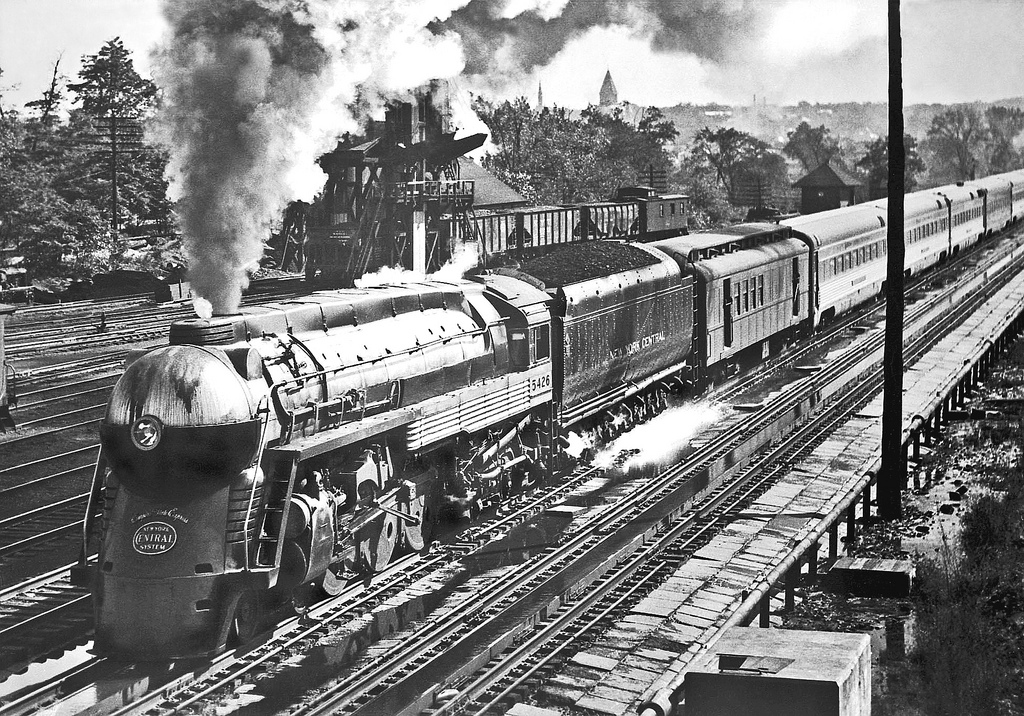 One of New York Central's two 4-6-4's (J-3) streamlined for the "Empire State Express" service, #5426, is seen here ahead of the train scooping water from a track pan.

In theory track pans were an ingenious design that improved schedules and reduced operating costs.  In reality, they did not always function as intended (especially early examples) and could be expensive to operate/maintain.

Pans did not generate a great deal of interest among southern railroads or those out west; the former had relatively few large cities with significant business clientele (and as a result fast schedules were not as important) while the latter constantly dealt with supply issues in the dry, arid climate (pans would rapidly lose their water due to evaporation).

In addition, perhaps weather-related issues was a reason pans did not catch on in Canada where frigid temperatures are a common occurrence throughout much of the year.  Such headaches were also a problem in the Northeast and other northern regions of the country.

Railroads combated the issue in a number of ways from constantly circulating the water to even using old locomotive boilers which employed blasts of hot steam to keep it from freezing. 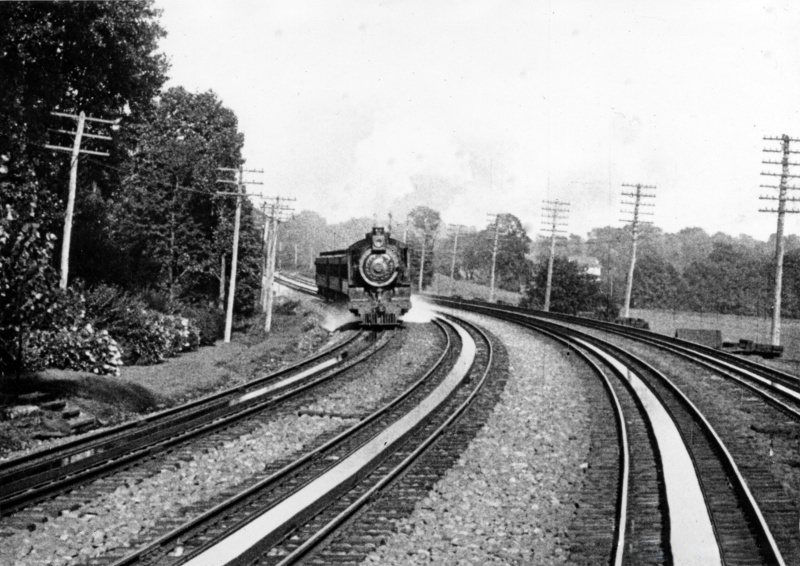 An example of track pans on the Pennsylvania Railroad during the early 20th century.

The biggest issue with early track pans was not even the pan itself but simply getting water into the tender.  It seems that an efficient scoop mechanism (located beneath the tender) was much more difficult to design than originally anticipated.

Many early examples either struggled to pick up enough water to refill the tender's jacket or the resistance was so great when hitting the pan the scoop would often lift above the pan and hardly collect any water!

Help finally came in 1894 when William F. Kiesel, Jr., then PRR's mechanical engineer, received a patent for a design which balanced the force of water entering the scoop with that exiting into the tender.

According to Mr. Alexander article's it doubled the efficiency of previous types and could acquire 3.3 gallons of water per linear foot of trough at 70 mph.  His work later earned him the Franklin Institute’s first George R. Henderson medal in 1928.

There were other scoops put into service over the years but most followed the basic concepts of Kiesel's 1894 design.  Interestingly, for the many improvements track pans received over the years, from improved scoops to larger troughs and heating mechanisms, railroads never bothered designing a gauge to inform a train's crew when their tender was full.

Such a feature would have been useful in general but especially where pans were in use.  As a result, tenders often were overfilled creating torrents of water that would spill over the top and down the sides of the car.

In addition, for any passengers riding in a car immediately behind the tender conductors often informed them to close all windows when approaching pans or risk getting very wet!

Pan locations were always listed on employee timetables but they were also equipped with marker lights at the beginning, middle, and end for improved safety.  In addition, only certain locomotives and, of course, tenders could use them which was also clearly stated. 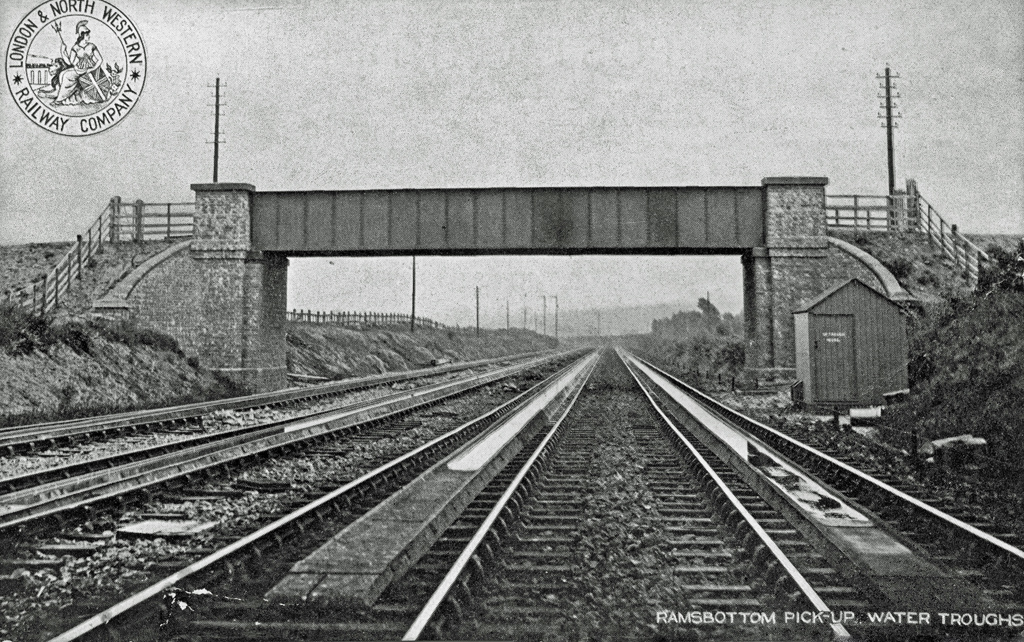 Seen here is a "Ramsbottom" water trough on the quadruple track main line of the London & North Western's West Coast main line circa 1904.

To keep the pans full and ready for use railroads often built pump houses nearby, which were constantly manned by pumpmen who also kept a watchful eye in the event something may not be functioning properly or fouling the equipment.

When freights, with helpers, approached a pan pumpmen had to work fast as after the lead locomotive passed it needed refilled quickly (usually requiring at least four minutes to do so) so the trailing unit (s) could also grab a drink.

As diesels rapidly replaced steam in the 1940s and 1950s the use of pans disappeared on those railroads which still employed them.

The last pan on the New York Central was removed at Lawton, Michigan in 1954 while the PRR pulled its final pan from service near Hawstone, Pennsylvania in 1956.  In England, track pans remained in use through the 1970s for diesels to refill their steam generators.