The Illinois Central may have only been a moderately sized Class I but its passenger services were legendary. First among these was its flagship service, the Panama Limited.  This train connected the Deep South (New Orleans) with the Midwest (Chicago).

Later, a sister run was added, which ironically became more famous thanks to a song released during 1971, the City of New Orleans.

While the Panama was all about luxury and first class travel, the City of New Orleans was meant to provide a vacation experience available to anyone.

The IC entered the streamliner era with the Green Diamond in 1936, a Pullman design that closely mimicked Union Pacific's early trainsets.  The Panama Limited can trace its earliest heritage back to 1911, long before sleek and colorful trains could be found across America.

Following a brief hiatus between 1932-1934 (a result of the Great Depression), it was the streamliner age which truly allowed the train to shine.

Thanks to an order for new equipment prior to World War II's outbreak, the railroad boasted a vibrant, all-new Panama Limited soon after America entered the conflict. 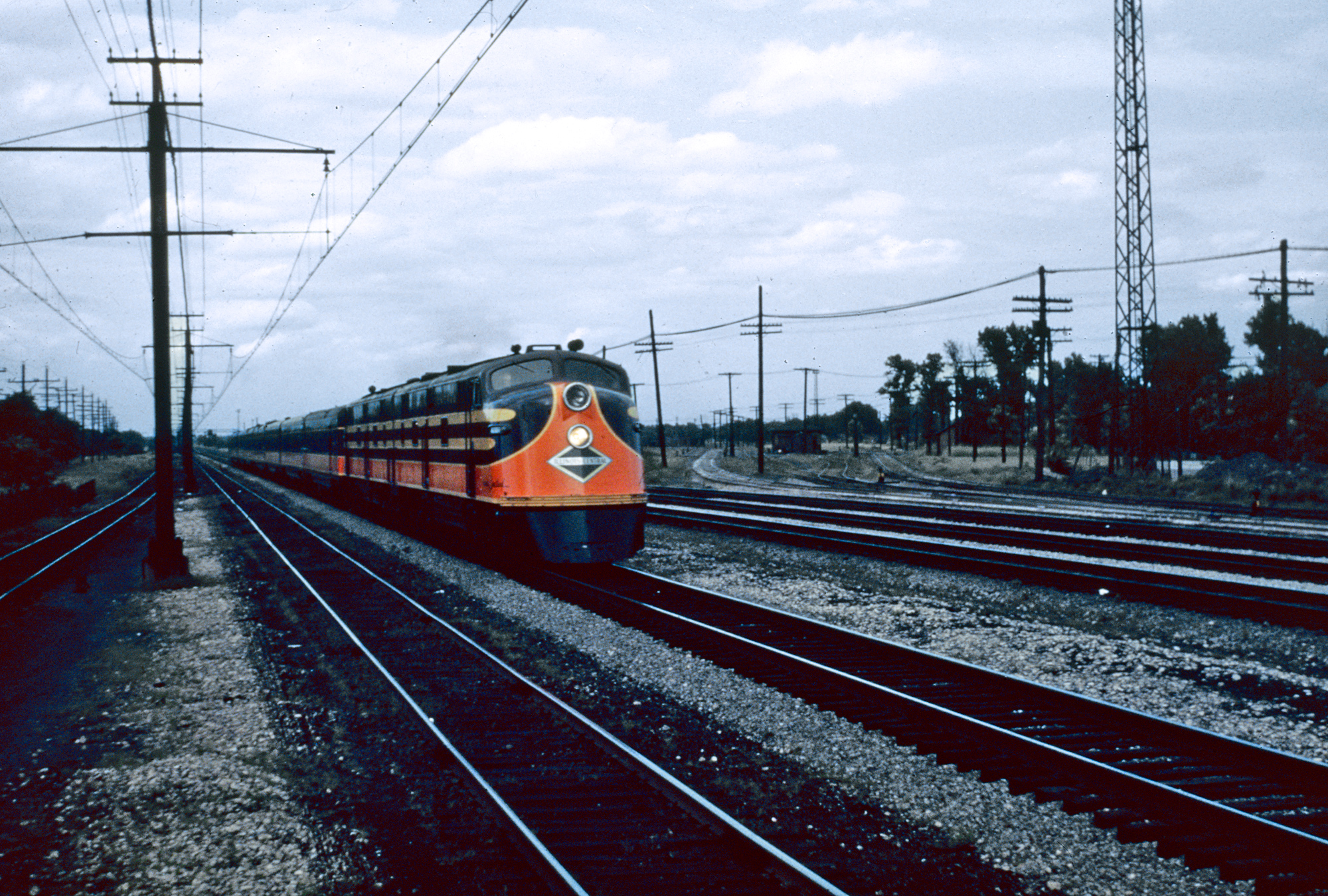 A handsome, A-B set of Illinois Central E6's hustle the "Panama Limited" southbound past the small commuter station in Homewood, Illinois (just behind the photographer) during the late 1940s. American-Rails.com collection.

The Illinois Central slogan described the railroad quite well, the Main Line of Mid-America. It was one of only a select few railroads to serve the north-south Midwestern/Southeastern market.

What made its routing even more odd was that it served Midwestern markets that traditionally moved goods and people from east to west. 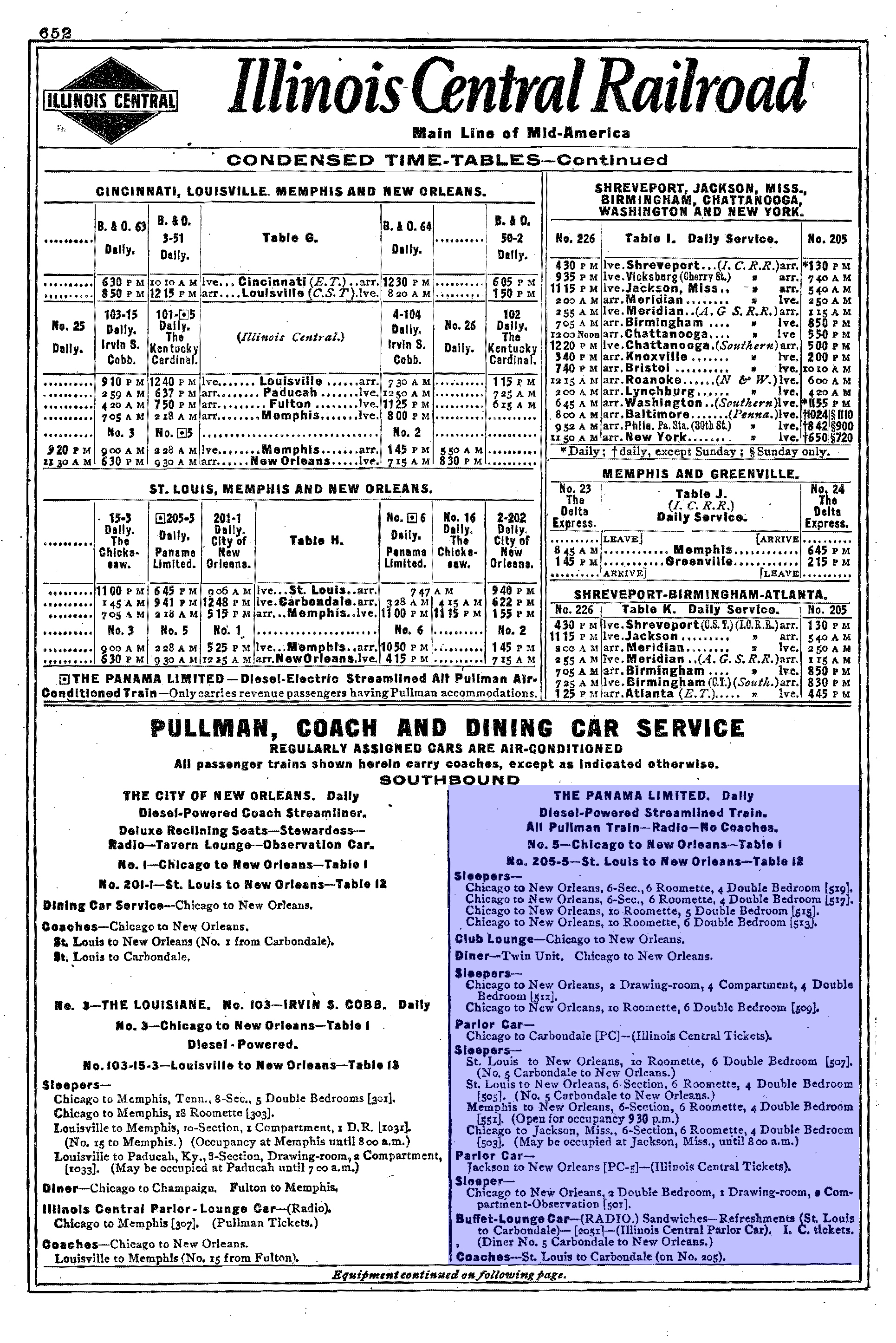 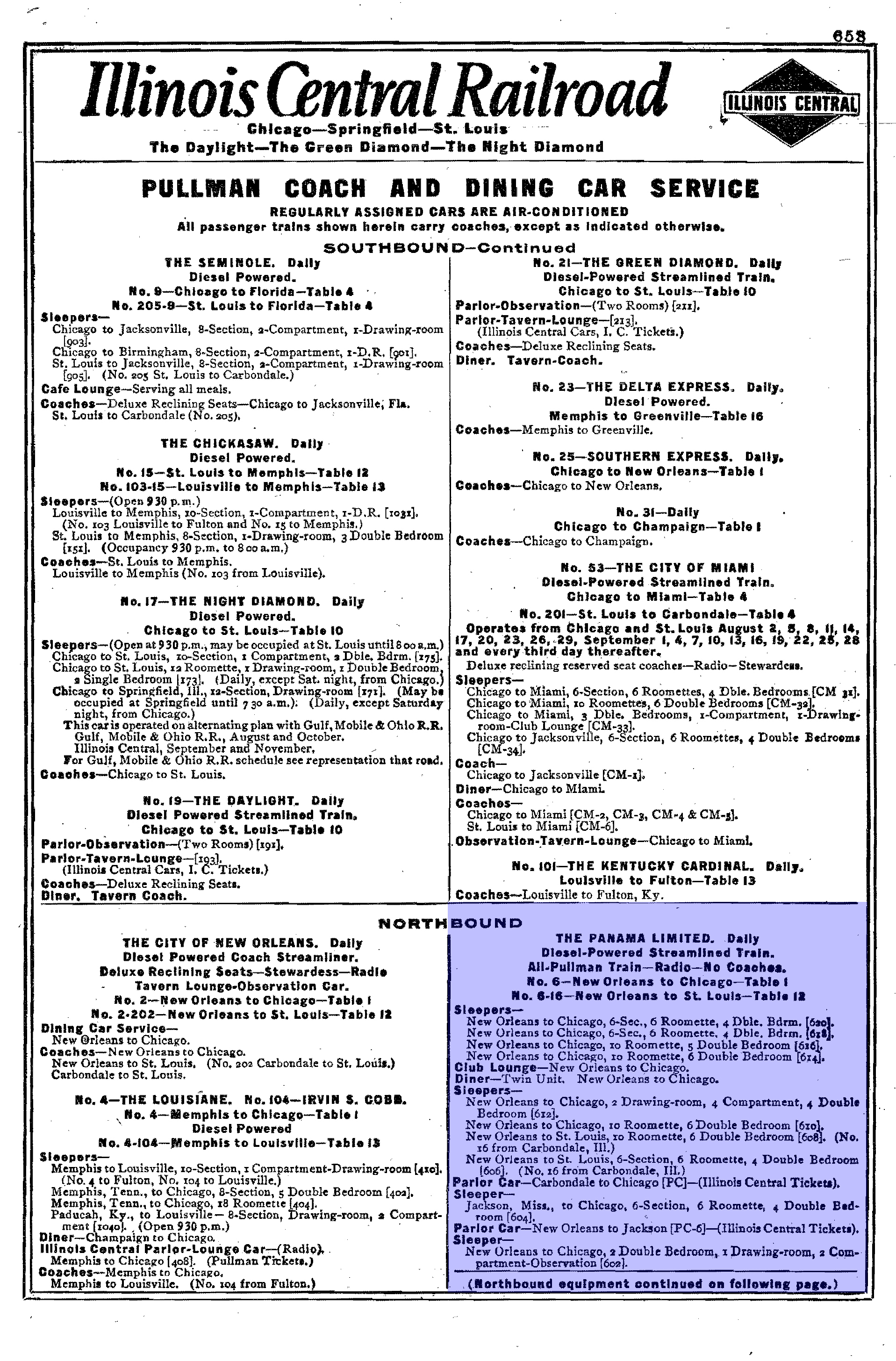 The Panama Limited was all about style and class. The train had been around since 1911, making it one of the oldest named trains in the country.  However, like most passenger trains, the Panama's iconic status was not achieved until it was streamlined in May of 1942. 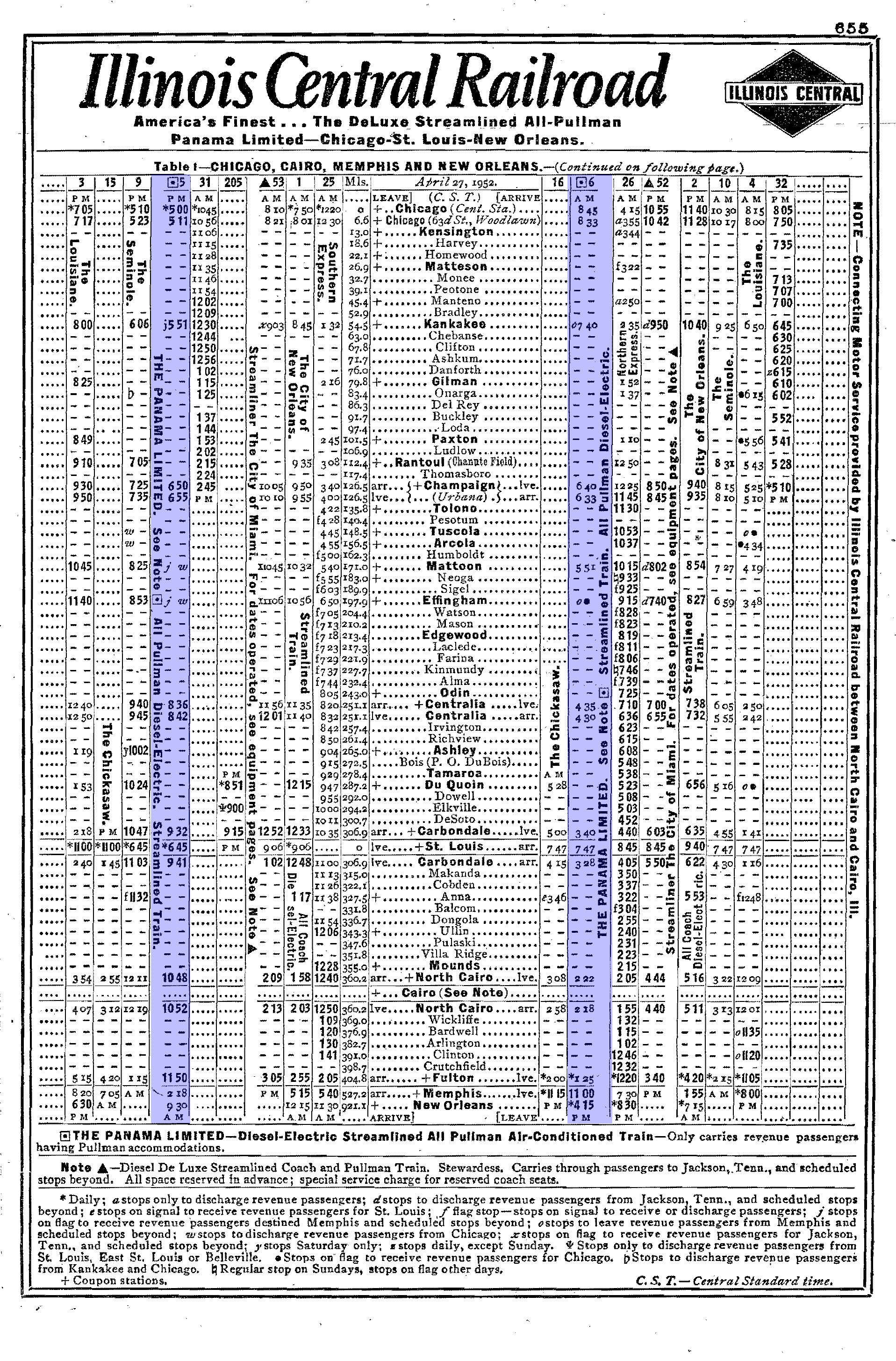 That spring, when the train was re-inaugurated as a streamliner it was bedecked in a beautiful livery of chocolate brown and red with yellow trim (another masterful artistic creation from the design team at Electro-Motive).

The interior was just as striking. Playing on Deep South and Cajun themes, the train’s entrées highlighted the finest of the region’s cooking. 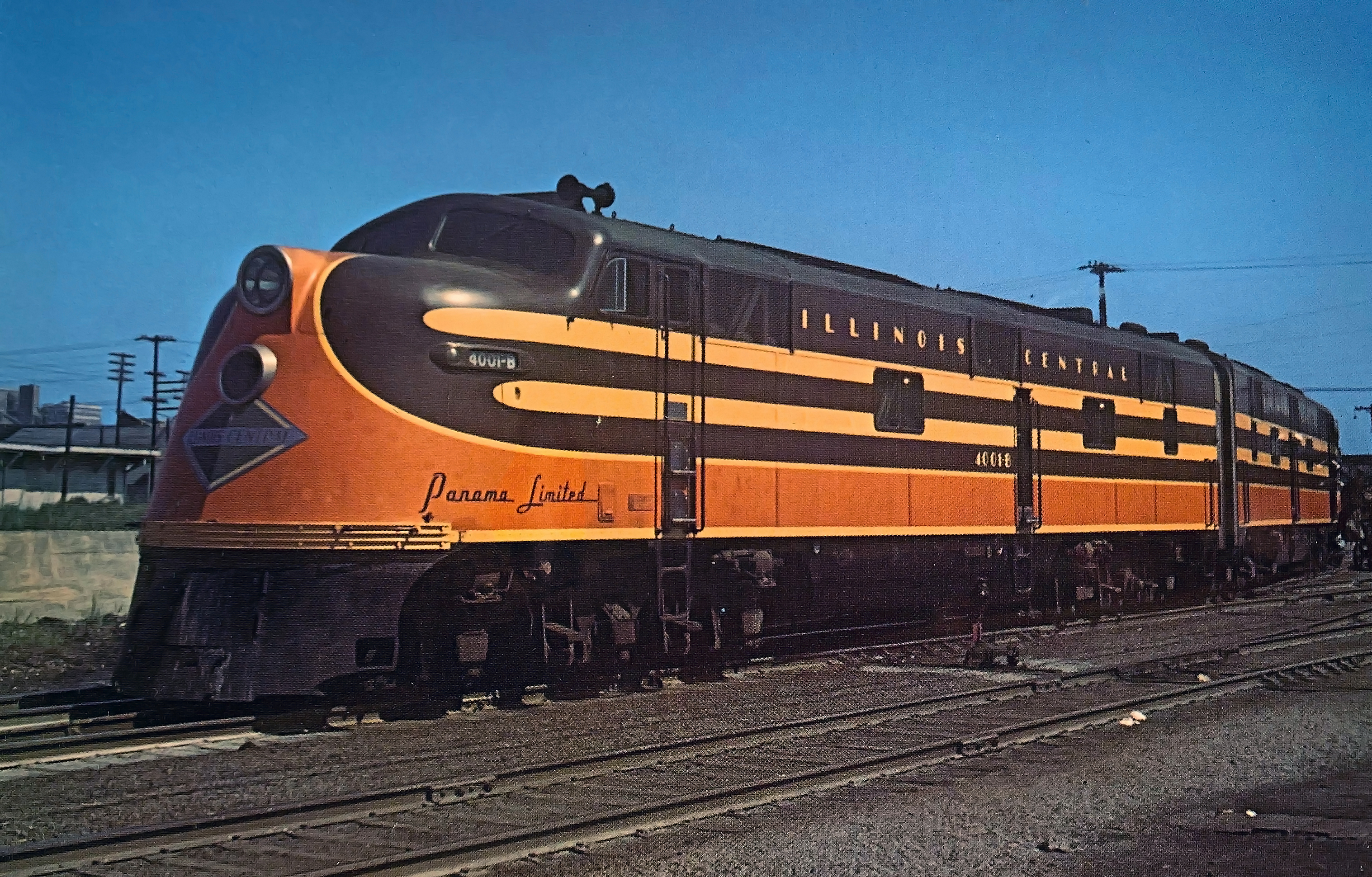 Illinois Central E6's #4001-B and #4001-A await departure from New Orleans with train #54, the northbound "Panama Limited," on October 3, 1943. This was IC's original passenger livery. Richard Kindig photo. American-Rails.com collection.

The train also ran a fast, limited stops schedule, completing the run from Chicago to New Orleans in just 16 hours.  It was not uncommon for speeds reaching 100 mph.

A good example of this was the high regard placed on the scheduled timetable by then-IC president Wayne Johnston, as  noted by Mike Schafer and Joe Welsh in their book "Streamliners: History Of A Railroad Icon."

From his desk at Central Station in Chicago, Johnston could see the Panama at its platform.  If the train did not depart exactly at its scheduled time, someone was catching serious flack regarding the holdup.

During the train's early streamlined years it could complete the Chicago-New Orleans run in about 18 hours with connecting service to St. Louis.

However, by the 1960s the train could complete the trip in just about 16 1/2 hours. The train's typical consist included sleepers, club-lounges, diners, a café service. 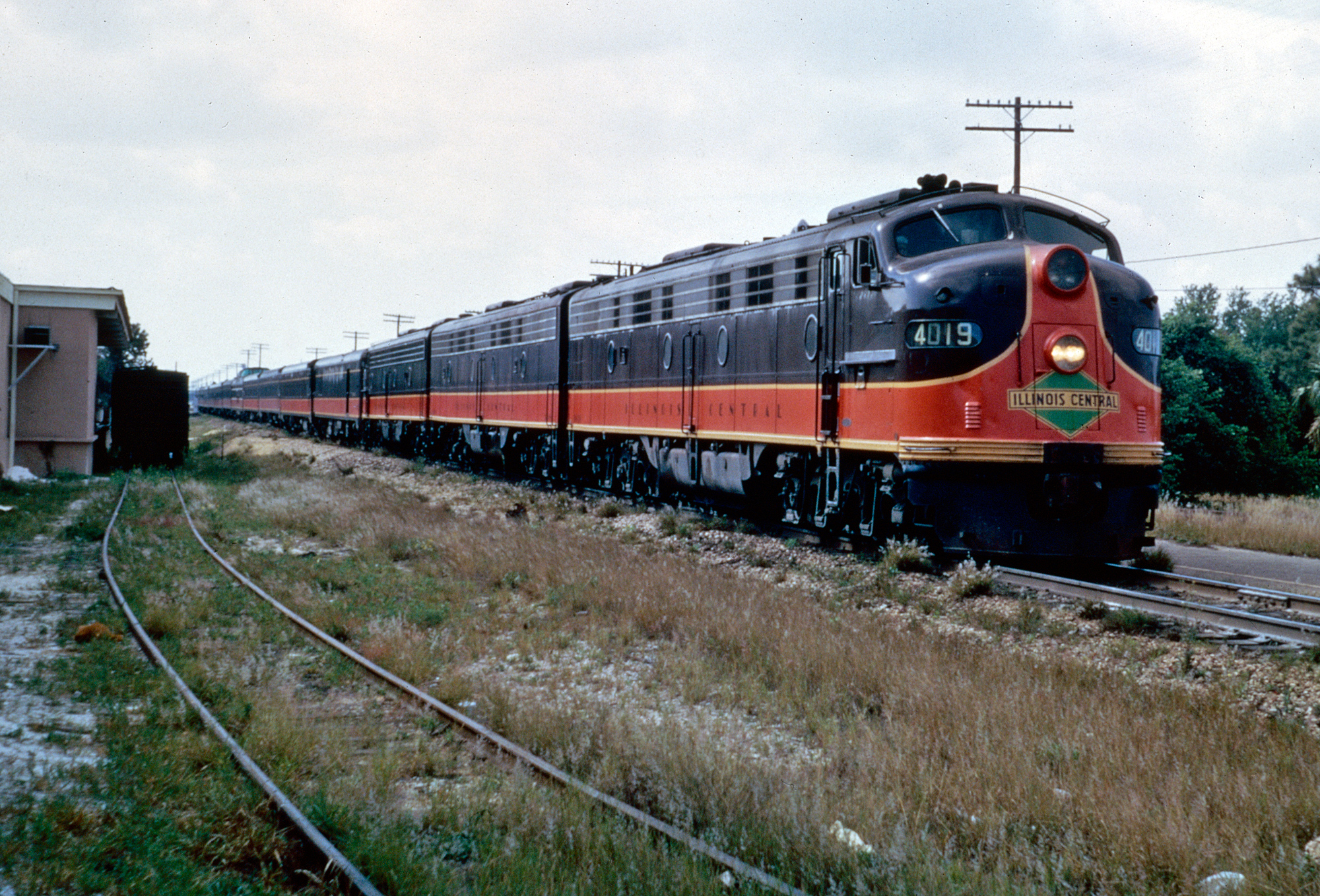 Interestingly, the Panama Limited continued to see relatively strong ridership through the 1960s.

In 1959 it was even upgraded with Vista-Dome sleeper-lounges. During the 1960s the train was one of the few to still provide all-Pullman service, an increasing rarity by that date.

Still, increasing operational costs and the loss of RPO service forced the Illinois Central to downgrade the plush Panama by the late 1960s, at which point it lost all-Pullman status.

Despite these cutbacks, the IC remained dedicated to its flagship through the end with its final run occurring on April 30, 1971.