One idea it would eventually carry out was to bypass then busy and congested Cumberland, Maryland which was a major staging point and junction along the railroad (here the B&O had constructed a large yard and its two primary western main lines, one to St. Louis and the other to Chicago, diverged).

The cutoff itself was less than seven miles in length but because it bypassed Cumberland and was only a short, direct distance from its St. Louis main line west of the city the project saved the railroad valuable time and resources in moving through trains.

Due to Cumberland's layout and traffic through the region there has often been talk of reopening the bypass as a relief valve around the city (which, ironically, was the very reason for its initial construction).  However, thus far no hard plans have been made to carry out this endeavor and the 6-mile corridor remains abandoned today. 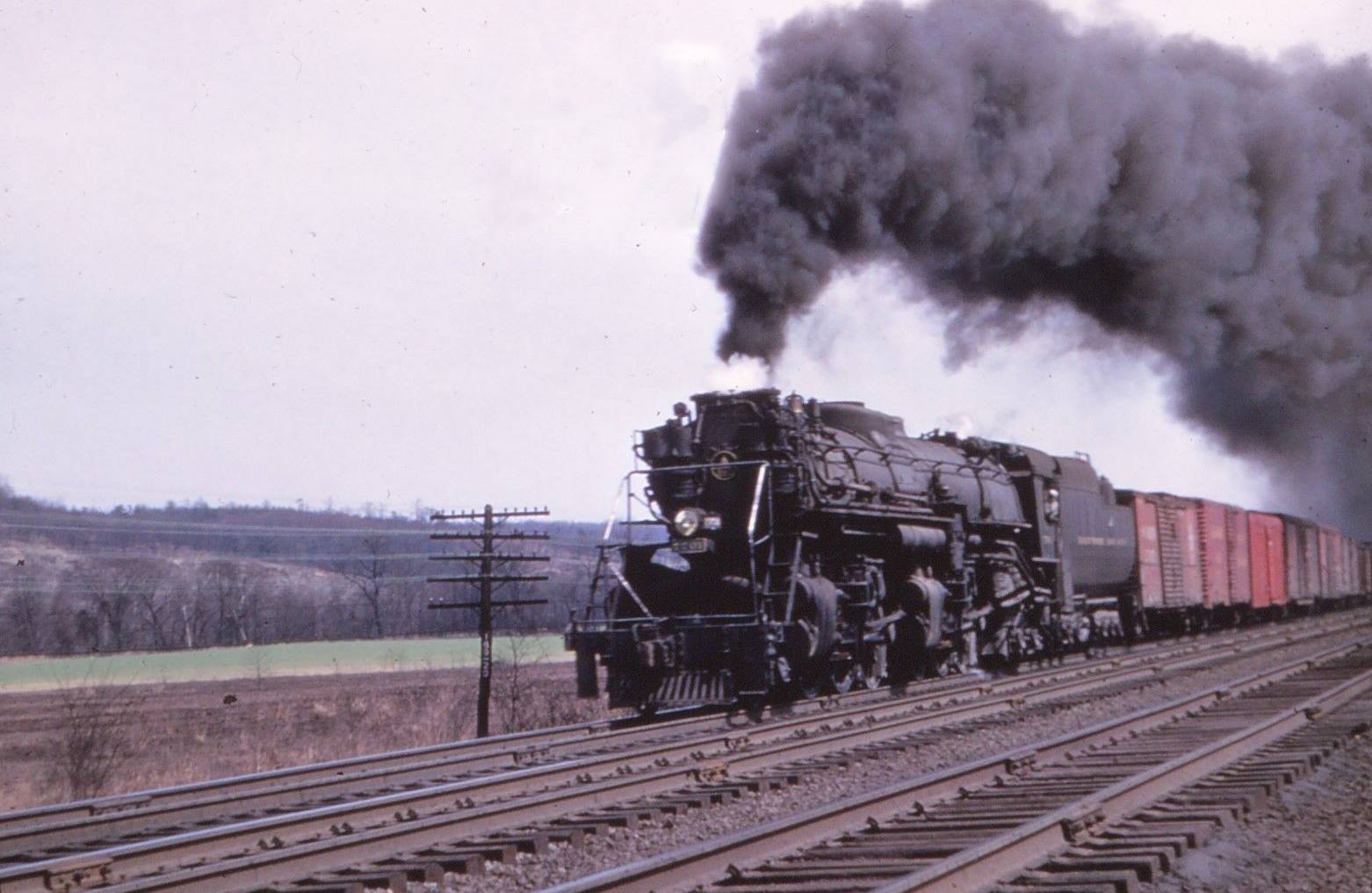 Baltimore & Ohio 2-6-6-4 #7701 (KB-1) steams along the East End/Cumberland Division with a westbound manifest at Green Spring, West Virginia, located just east of the Patterson Creek Cutoff during the 1950s. These machines were built for the Seaboard Air Line in the mid-1930s and were acquired by the B&O during the summer of 1947 to fulfill a power shortage. Bill Price photo.

The Baltimore and Ohio Railroad, “Linking 13 Great States With The Nation.” This was the B&O's slogan for much of its existence and something which it held to for its entire life. 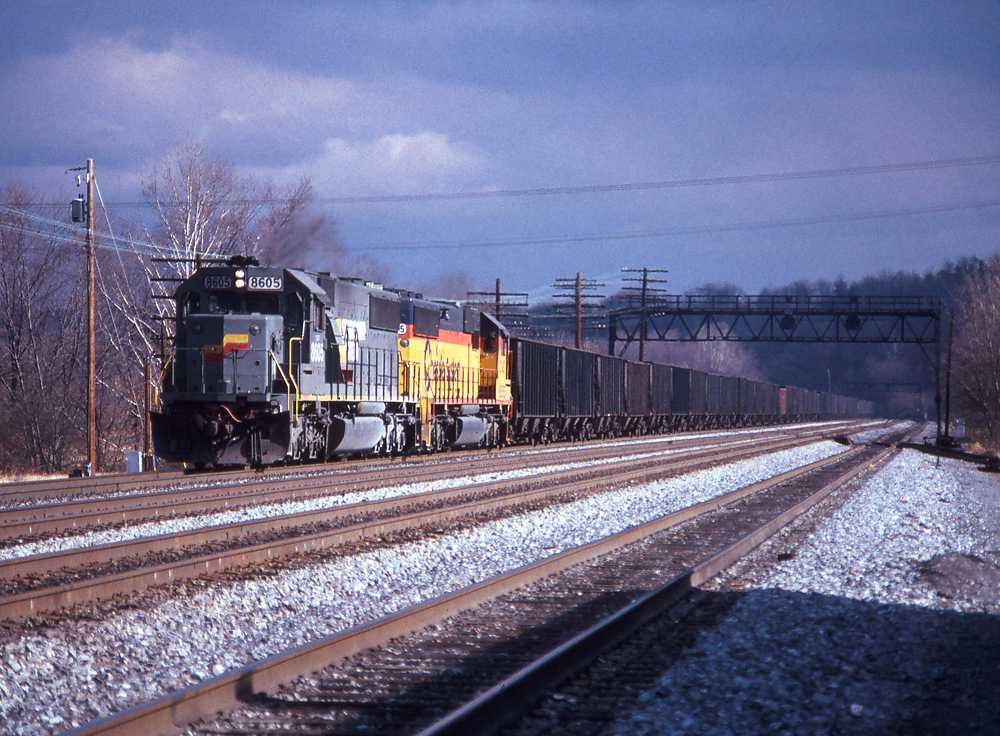 While never a wealthy railroad throughout its existence (when compared to the likes of its much larger and powerful northern competitors, the Pennsylvania [PRR] and New York Central [NYC] railroads) its legacy will forever be remembered as a survivor and that it put customer service above all else.

A map of the Patterson Creek Cutoff (circa 1950), highlighted in blue.

The Baltimore & Ohio's Patterson Creek Cutoff was the railroad's attempt to relieve the growing congestion around Cumberland for through trains heading to Keyser and points west.

The cutoff had exactly one tunnel, Knobley, and one bridge, which was located just west of the tunnel and crossed the North Branch of the Potomac River.

The B&O was able to complete its cutoff by 1904 and the double-tracked route covered just 6.3 miles, according to the official timetable before rejoining the main line at McKenzie, Maryland and milepost 281.3.

What's interesting to note is that for trains to use the main line heading through Cumberland required nearly a 17-mile jaunt to cover the distance between Patterson Creek and McKenzie instead of the just over six-mile cutoff (basically the line saved ten route miles and plenty of headache navigating through Cumberland). 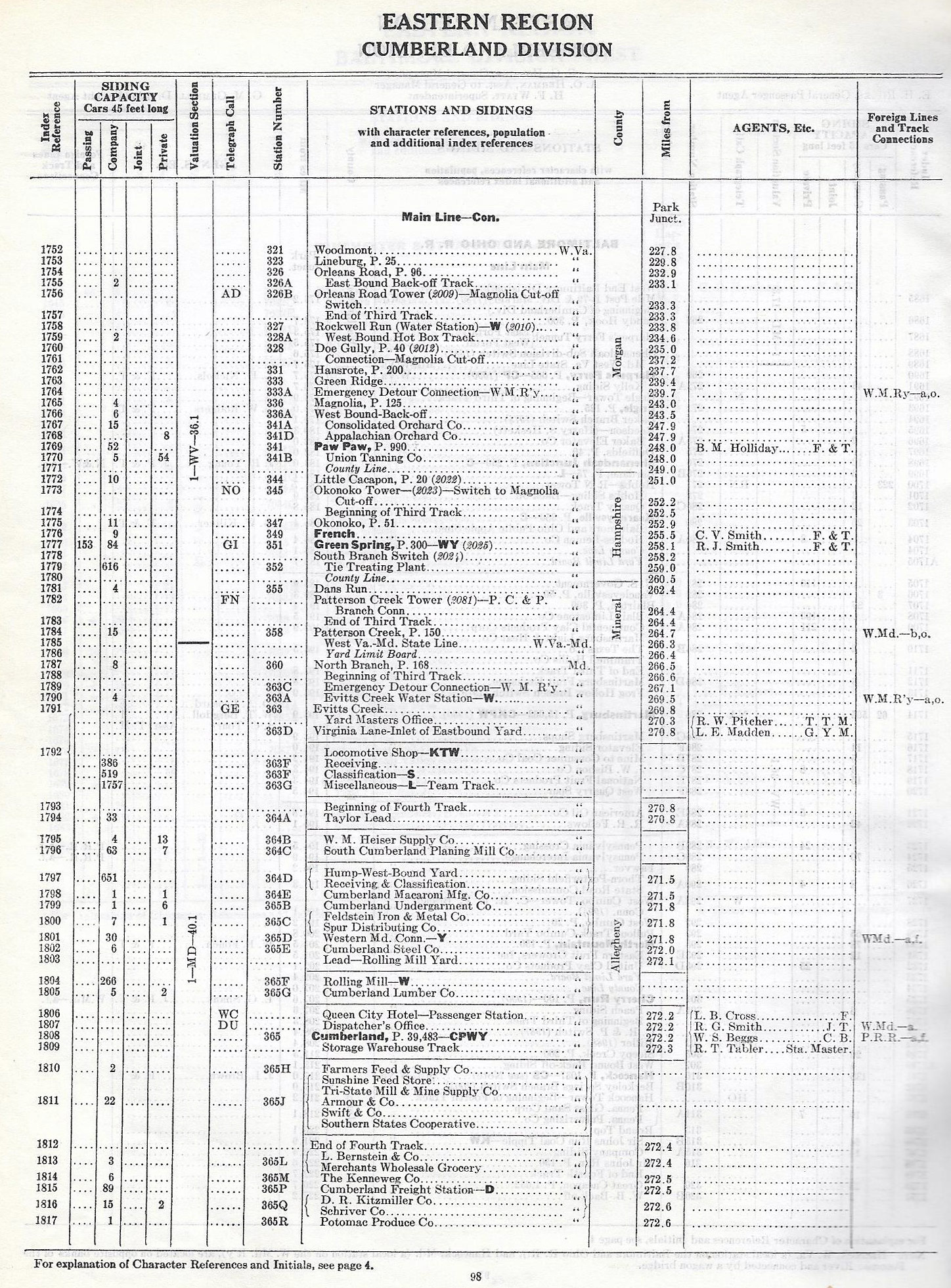 From the railroad's 1948 "Official List", heading towards Cumberland on the Baltimore & Ohio main line you can see where the Patterson Creek Cutoff broke west. 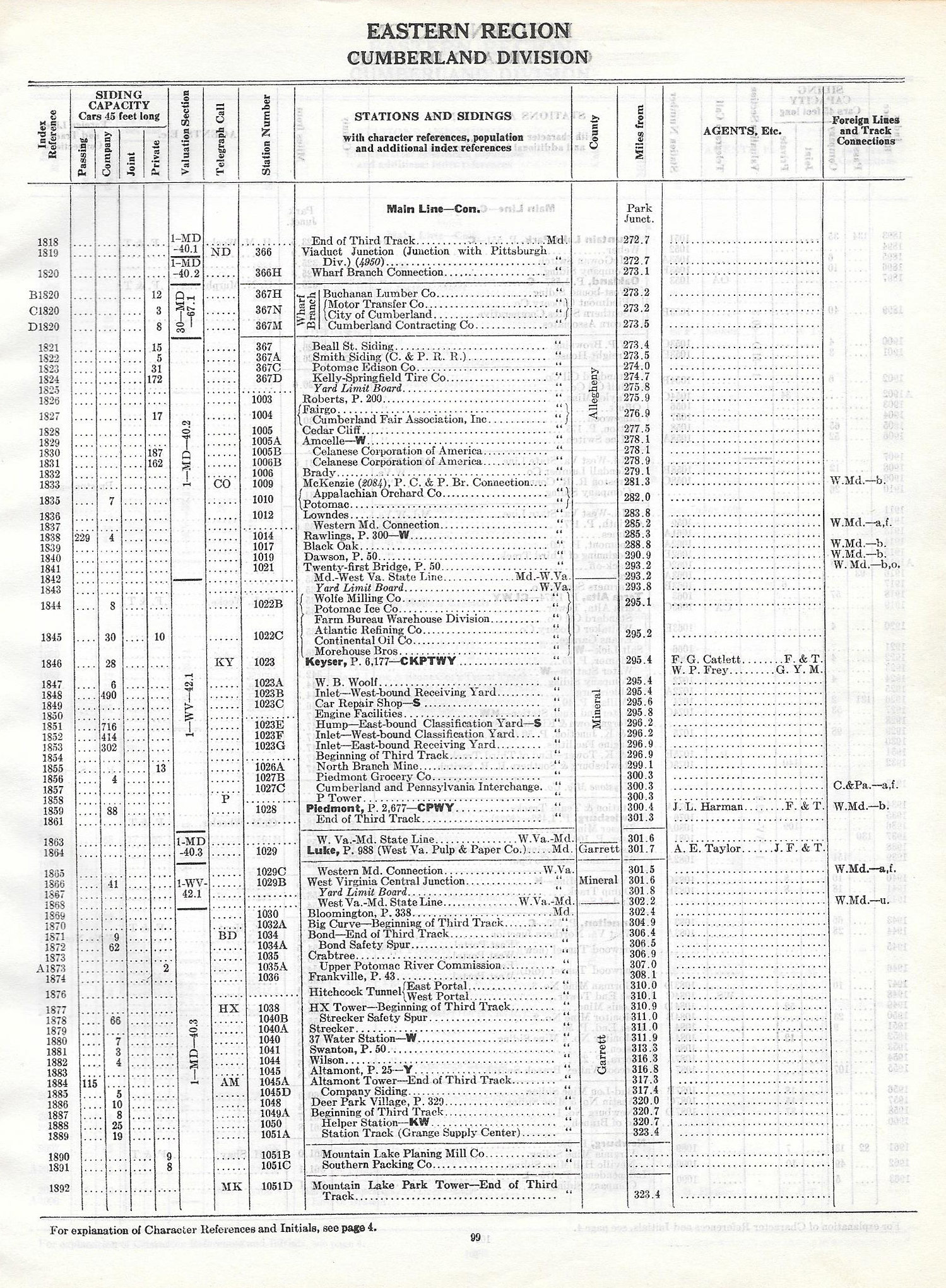 From the railroad's 1948 "Official List", continuing west you can see the re-connection of the Patterson Creek Cutoff along the main line.

Below is more information concerning Knobley Tunnel, thanks to the B&O's "Official List" dated January 1, 1948:

Knobley Tunnel: Constructed in 1902 it is located 0.9 miles east of McKenzie Station and carries 3 degrees of curve for a distance of 821.5 feet on its eastern end with the rest of the structure 3,338.4 feet of tangent (straight) track. It is a total of 4159.9-feet long, 23' wide, and 30' high. The tunnel's portals are constructed of stone while the bore is lined with brick.

Patterson Creek Cutoff remained in use as a double-tracked affair until around 1960 when the B&O cut the route to a single line and around this time likewise closed CO Tower.

The route remained in use through the 1970s before decreasing freight traffic around Cumberland warranted then Chessie System to abandon the cutoff altogether. Today, the line remains virtually intact save for the track and with Cumberland again a busy and congested junction for CSX Transportation there have been rumors of the Class I looking at the possibility of reopening the cutoff.