One of the Southern Railway's most elegantly named passenger trains was, ironically enough, only utilitarian in nature.  The Peach Queen served the Washington, D.C. to Atlanta market as a secondary run behind the premier Southerner, one of the railroad's top three trains and an early streamliner candidate.

The Queen was a late entry onto the company's timetable created after World War II from a previously unnamed consist to honor the southern region in which it operated.

It managed to remain within the fleet until the start of Amtrak, which took over intercity rail services during the spring of 1971.  At that time the train still offered first class accommodations, a nod to the Southern's stance of not allowing its services to slip through the very end.

The Peach Queen made its first run on August 31, 1947.  The train had previously only been known by its numbers on Southern's timetable, unceremoniously working as a secondary and less-expensive alternative to the Southerner between Washington, D.C. and Atlanta.

It also offered available through service to Birmingham, New Orleans, and New York (the latter via the Pennsylvania Railroad).  This was the age of Southern's streamliners. 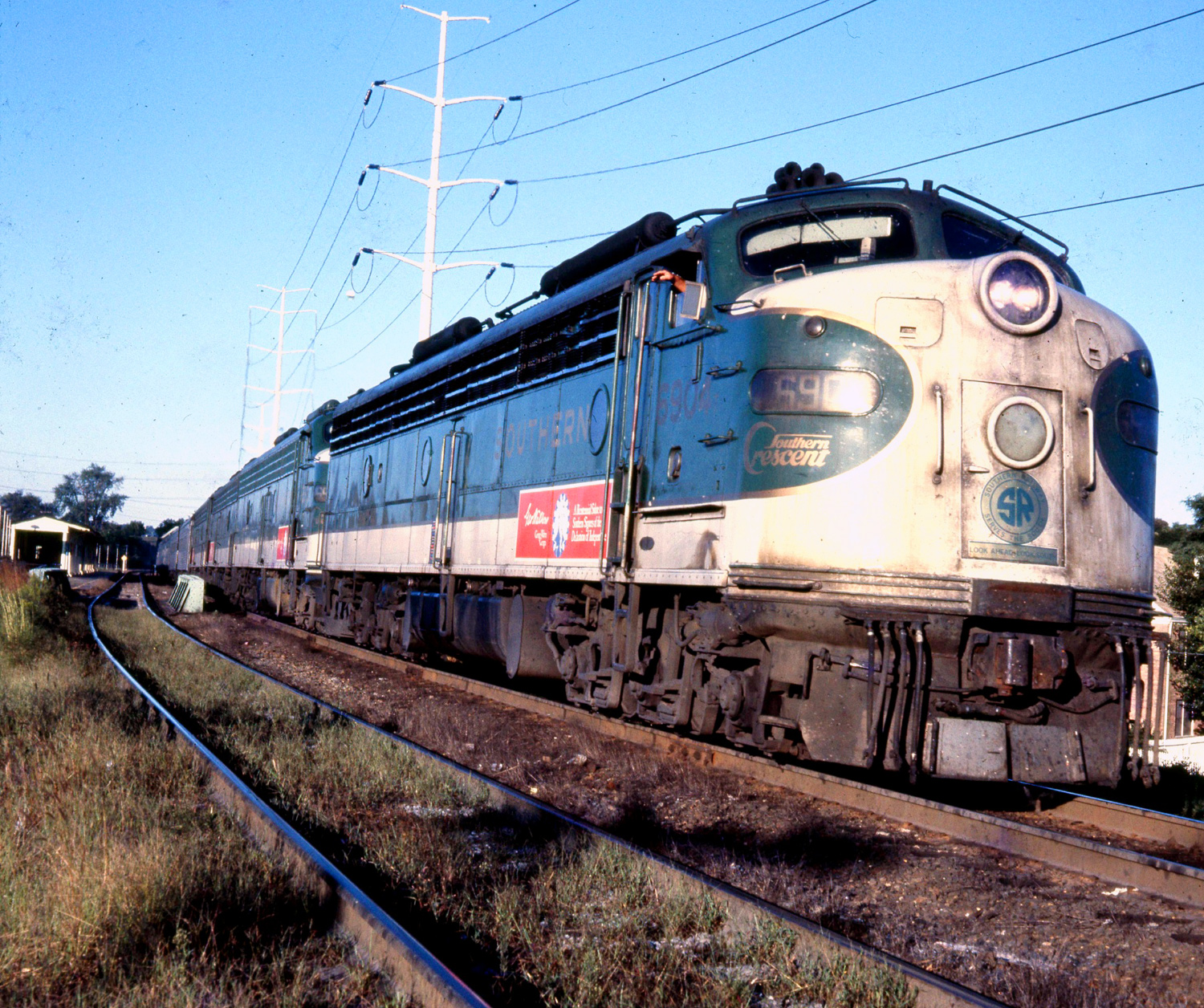 The railroad was finally convinced during the 1940s to upgrade its top trains with sleek, lightweight equipment from Pullman-Standard and the Budd Company after seeing the successes it wrought on other lines like the Louisville & Nashville and Atlantic Coast Line.

The designation of the Peach Queen was an attempt to grow patronage and give the train a more graceful name.  The August 28, 1947 edition of Lexington, North Carolina's The Dispatch provides a fine overview of the Queen and how it was born.

The paper describes the new train with the following:

"Beginning on September 1, Trains 29 and 30 will be known as 'The Peach Queen' and the swap of numbers was made in order to get a closer sequence in the number since a decision was reached to bestow the permanent name."

"Recognition was given the fact that during the peach season it has become a custom in upper South Carolina, around Spartanburg, to provide peaches to be served free to passengers in dining cars on these trains.  No. 29, southbound, passes here in the early morning."

"The Southern now hauls great quantities of peaches from orchards along its lines from June until September and the two popular trains are being named in recognition of the fruit sections through which it passes in the Piedmont south."

The Peach Queen always maintained a consist of heavyweight equipment although it occasionally ran with some rebuilt cars with subtle streamlining; normally this included a diner, reclining seat coaches, and through sleepers (New York-New Orleans, although later only went as far south as Atlanta).

In spite of the train's late start it was steam powered for a short while before the arrival of diesels, usually in the form of breathtaking Class Ps4 Pacifics or handsome Class Ts Mountains (both of which were clad in stylish Virginia Green with gold trim). 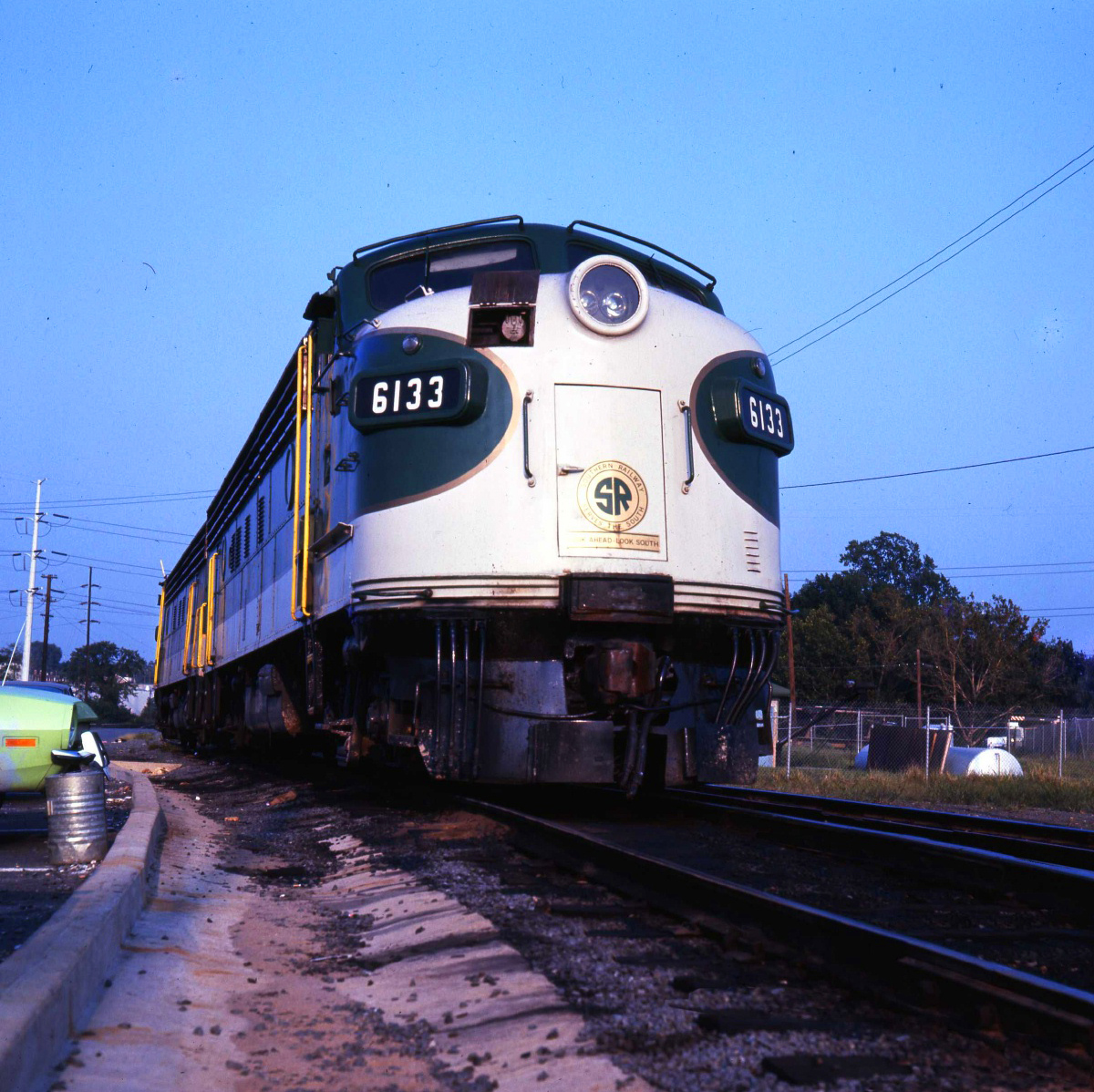 There is a fine photo of the train featured in Tom Murray's book, "Southern Railway," taken in July of 1947 just before it was inaugurated as the Peach Queen.  The image was shot by David Salter and shows the northbound #30 steaming at speed through Cornelia, Georgia with a pair of Ps4's up front.

According to the caption the photographer believed the train was cruising at a healthy 70 mph.  By the early 1950s it had been upgraded with Electro-Motive E6s and was later powered by E7s, E8s, and the all-around FP7.

As rail patronage waned during the postwar era the ever-financially conservative Southern began cutting back its passenger fleet.  The Queen lost through connections beyond Atlanta after July 5, 1958 and the northbound #30 was canceled entirely after December 26, 1964 (combined with the Crescent).

(The below Peach Queen timetable is dated to January of 1970.  Note that through service to Asheville [Biltmore Station] via Greensboro is not listed.  Additionally, by this date the train's northbound #30 had been canceled and combined with the Crescent.) 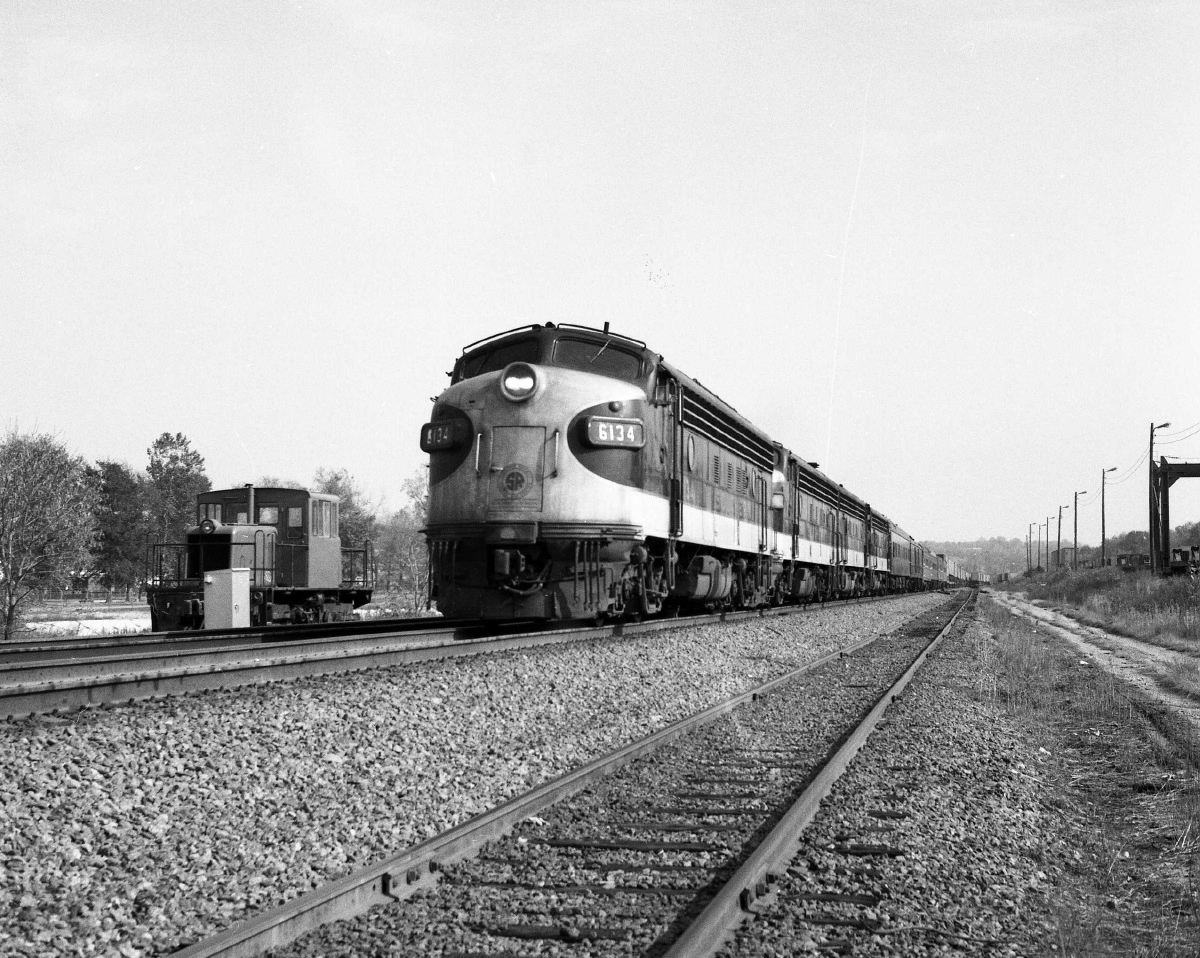 According to Mr. Murray's book the railroad was still dispatching six trains from Washington, D.C. during April of 1967, which included the remaining southbound run of the Queen.

It continued offering first-class accommodations (sleepers, a diner, and reclining seat coaches) until the Southern canceled the train entirely after February 1, 1970 at which time it was replaced by the Piedmont.

While the company recognized the growing losses from passenger services it was one of only a few major railroads (other notables include the Baltimore & Ohio and Santa Fe) to make an effort in keeping its trains on time and clean with many first-class accommodations still available to the traveling public.