The Southern Railway's primary passenger corridor was, especially after the turn of the 20th century, its main line between Washington, D.C. to New Orleans.

Along this route the railroad had two flagship trains the Crescent and Southerner, which in conjunction with the Pennsylvania Railroad allowed them both to reach New York City.

There was also one other notable train along this route, the Pelican, which covered the exact same territory as its counterparts (including the Pennsy connection to New York) and was an almost entirely all-Pullman affair.

Most certainly an interesting name that instantly invokes thoughts of the South, the train worked in conjunction with the Norfolk & Western (a railroad that ferried a number of the Southern's trains such as the Tennessean and Birmingham Special).

As one of the railroad's named passenger trains it survived much longer than many others and was not formally discontinued until 1969. 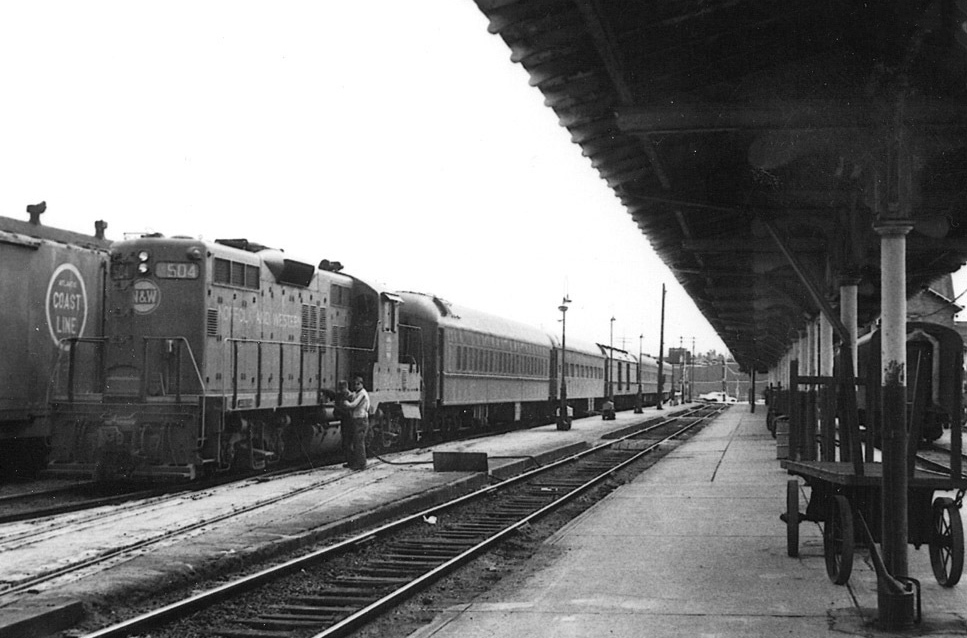 While the Southern Railway was always a highly profitable, and efficiently managed company it had little interest in the streamliner concept when it was first introduced to the public by the Union Pacific's M-10000 and Burlington's Pioneer Zephyr.

Seeing the sleek and shiny trains as merely a wasteful use of capital that was nothing more than a gag to get passengers back to the rails the Southern continued to resist the idea even after being approached by both Pullman-Standard and the Budd Company do to so.

As the 1930s wore on it became more and more obvious of the streamliner's benefits, they were having a very positive effect with the railroads implementing the service.

As such, by 1940 after doing its own internal study and concluding for itself the train's advantages the Southern ordered 44 new cars from Pullman-Standard along with 11 new E6 diesel locomotives from the Electro-Motive Corporation (7 E6As and 4 E6Bs).

A 1952 consist and abbreviated timetable of the "Pelican." Author's collection.

This equipment allowed the Southern to introduce two new streamliners, the Southerner and Tennessean although the onset of World War II precluded the railroad from further efforts while the conflict was ongoing.

The wartime period did see passenger traffic surge immensely, not only for the Southern but also for the industry in general.

Because of this the railroad's two flagship runs at the time between New Orleans and New York were having serious trouble keeping pace with demand.

Directly after the war the Southern unveiled a new train known as the Pelican, which was initially steam powered.

Just like its two more well known counterparts the train worked in conjunction with the Pennsy to reach New York. However, it did not start out as a streamliner and featured a lot of heavyweight equipment.

Just as the Tennessean and Birmingham Special worked with the Norfolk & Western between Lynchburg and Bristol, Virginia so too did the Pelican. As for the N&W during this era it held its passenger operations to a very high standard, which included those of its partner lines.

Because of this all three trains were almost always powered by the railroad's flagship power, the J Class, streamlined 4-8-4s. Naturally, any of these runs were quite a sight to behold if you were lucky enough to be trackside and see them in operation.

It was also not uncommon to see N&W equipment mixed in with the Pelican, which was particularly the case in later years. After the N&W retired its steam fleet typical power for any train it operated were EMD GP9s.

In early 1950 the Southern began receiving new lightweight cars from Pullman-Standard, which allowed it to completely reequip its crack trains like the Crescent while allowing the train to receive partial streamlining.

This period also saw the railroad receiving new passenger diesels from EMD including E8s (17) for its flagship runs as well as FP7s (20) for its secondary trains including the Pelican.

A typical consist for the train during the 1950s included seven sleepers that offered through service to Knoxville, Shreveport, Bristol, Williamson (West Virginia), a diner, and reclining-seat coaches.  From the beginning the train was listed on Southern's timetable as #41 (southbound) and #42 (northbound).

The railroad also promoted the run with an ad featuring, of course, a pelican that read "The Southern Railway named a train after me! 'The Pelican', trains Nos. 41 and 42 between New York and New Orleans."

Overall, the train enjoyed relatively good success although by the 1960s the railroad began consolidations wherever possible to reduce expenses in light of declining ridership.

In October, 1966 the train was briefly combined with the Tennessean although the name returned again by 1968. In 1969 the train disappeared forever when it was combined with the Birmingham Special and no longer served New Orleans, instead reaching that train's southern terminus of Birmingham.

At this time the train offered little on board conveniences, only reclining seat coaches and a diner (between New York and Monroe, Virginia), although the Southern continued to provide top-level service. Finally, the Special was discontinued in 1970.