The Pickens Railway (reporting marks, PICK) is a Class III, short line operating in northern South Carolina, slightly west and south of Greenville.  From the beginning it has been a private, family owned operation.

The railroad is an historic operation, chartered in 1890 by the South Carolina General Assembly to link Easley (where a connection was a established with the Southern Railway) to Pickens.

The company's main line was about 10 miles in length and at one time actually stretched further north of Pickens to handle timber.

In more recent years the company has expanded by acquiring nearby branches of CSX Transportation and Norfolk Southern. Alas, all good things must come to end as they say and this occurred along the Pickens' original main line, abandoned in 2013.

The route always served two rather small towns and the railroad was simply unable to sustain the line. On April 2nd year the final train, pulled by U18B #9502, ran the route.

Today, the Pickens' property consists of a former Southern line between Honea Path-Belton-Anderson (acquired through Norfolk Southern's "Thoroughbred Shortline Program" between 1991 and 1994) as well as an ex-Piedmont & Northern segment between Anderson and South Anderson purchased from CSX. 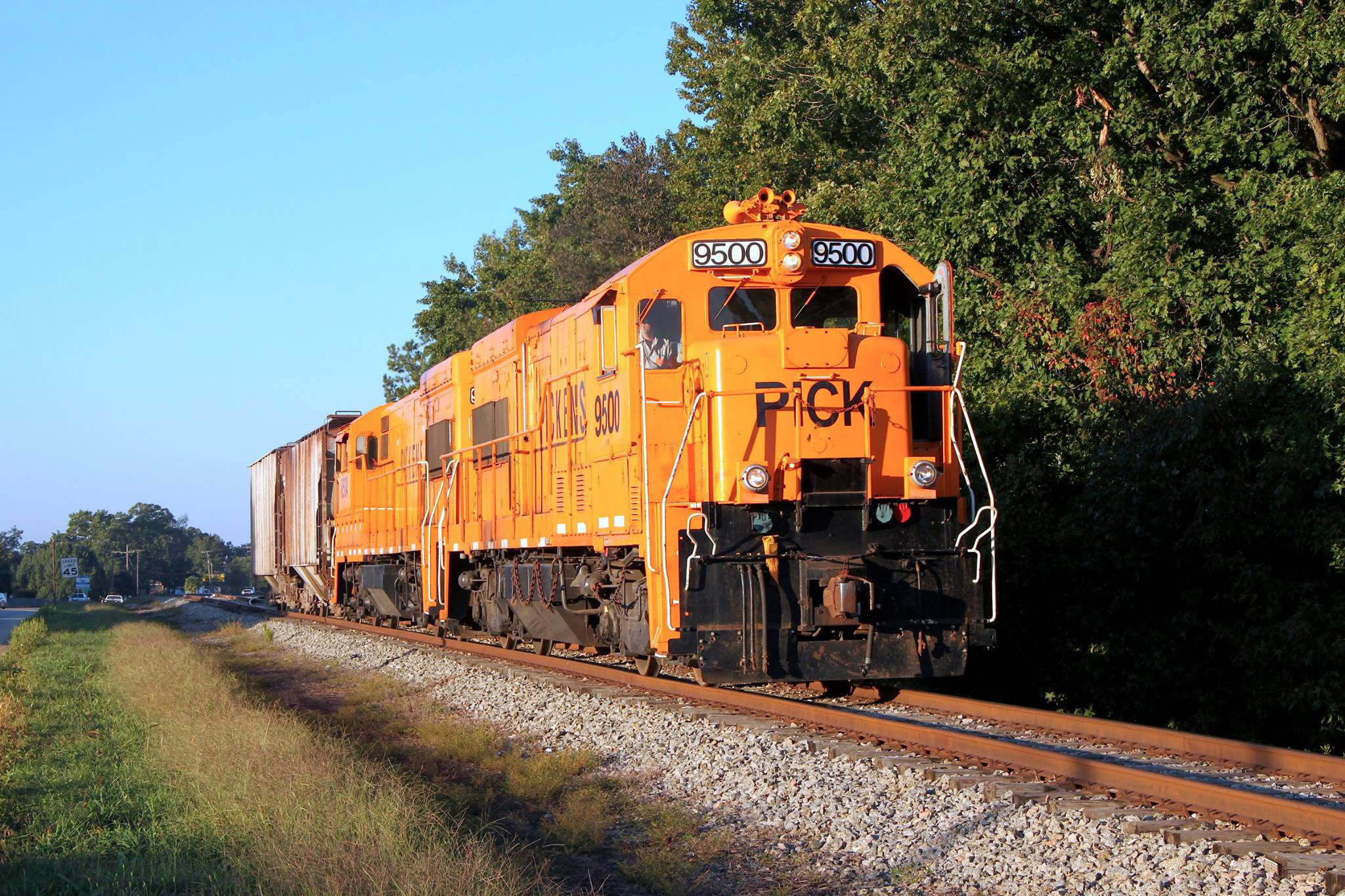 A pair of Pickens Railway U18B's, led by #9500 (built as Seaboard Coast Line #386 in 1974), appear to be switching customers at Gluck, South Carolina during September of 2015. Warren Calloway photo.

The origins of the Pickens Railway date back to December 24, 1890 when it was chartered by the state, which had stepped in to see the line finally completed between Pickens and Easley after two earlier attempts to do so had failed due to lack of investor interest.

The distance between the two towns was not very far and when the Pickens Railroad completed the line in 1898 its timetable registered the route to be exactly 9.3 miles in length.

The Pickens Railroad did have a foreboding start, however. On its very first revenue run to Easley in 1898 the train derailed due to a local kids wanting to see if placing spikes on top of the rails would actually cause something to happen.

That it did and the railroad, already in a precarious financial situation would not turn a profit for another seven years in 1905. A few years later, in 1910 the railroad was briefly taken over the Southern although by the 1920s it returned to private ownership. 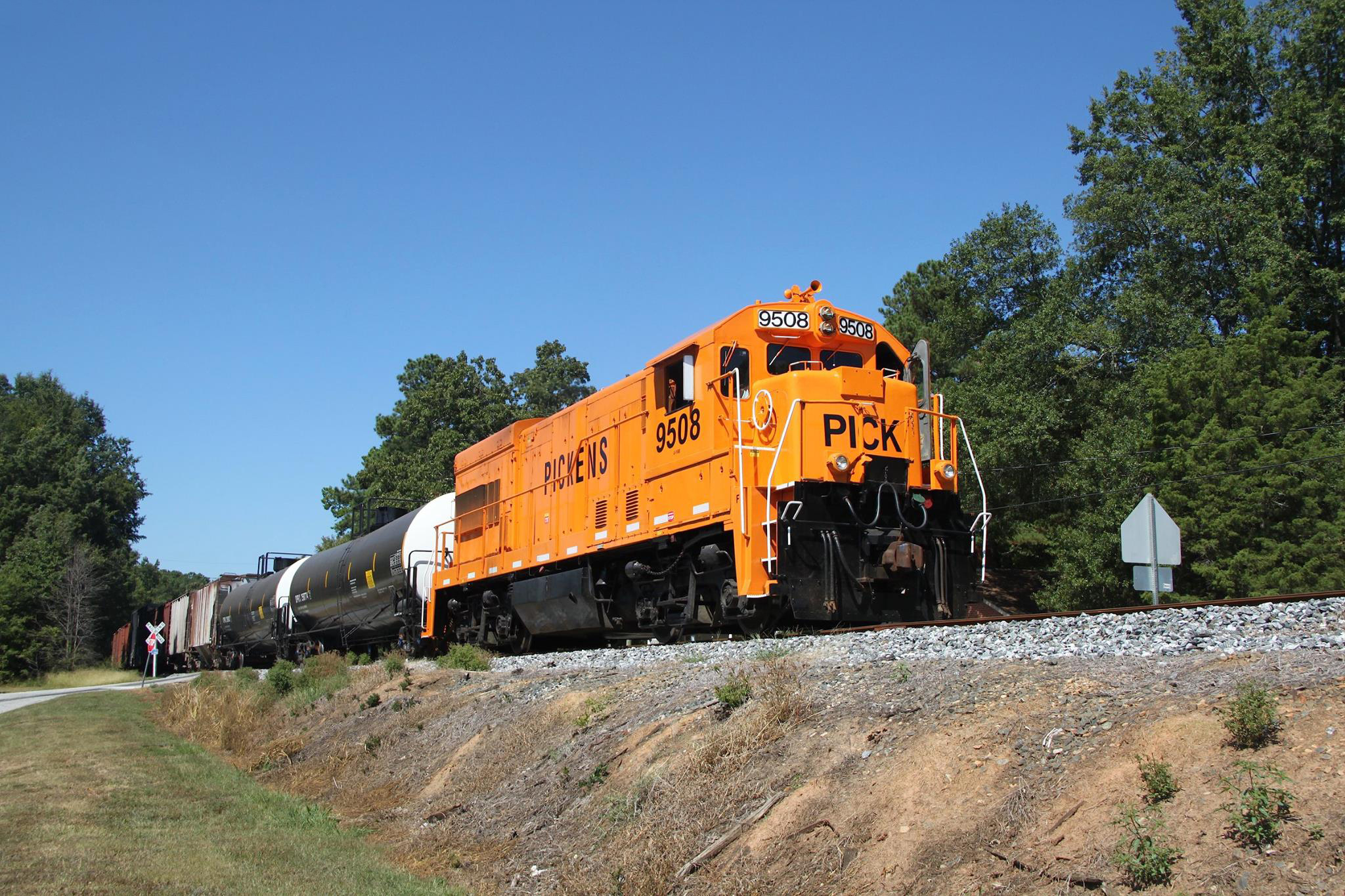 The biggest change for the Pickens Railroad at the time occurred in 1939 when the Singer Manufacturing Company purchased the railroad to ship its product.

What resulted in the purchase began as early as the 1920s when the sewing giant decided to build a large plant near Pickens. Over the years the company used the railroad increasingly to ship its finished products (as well as receive materials) and eventually decided it would be a very important asset. 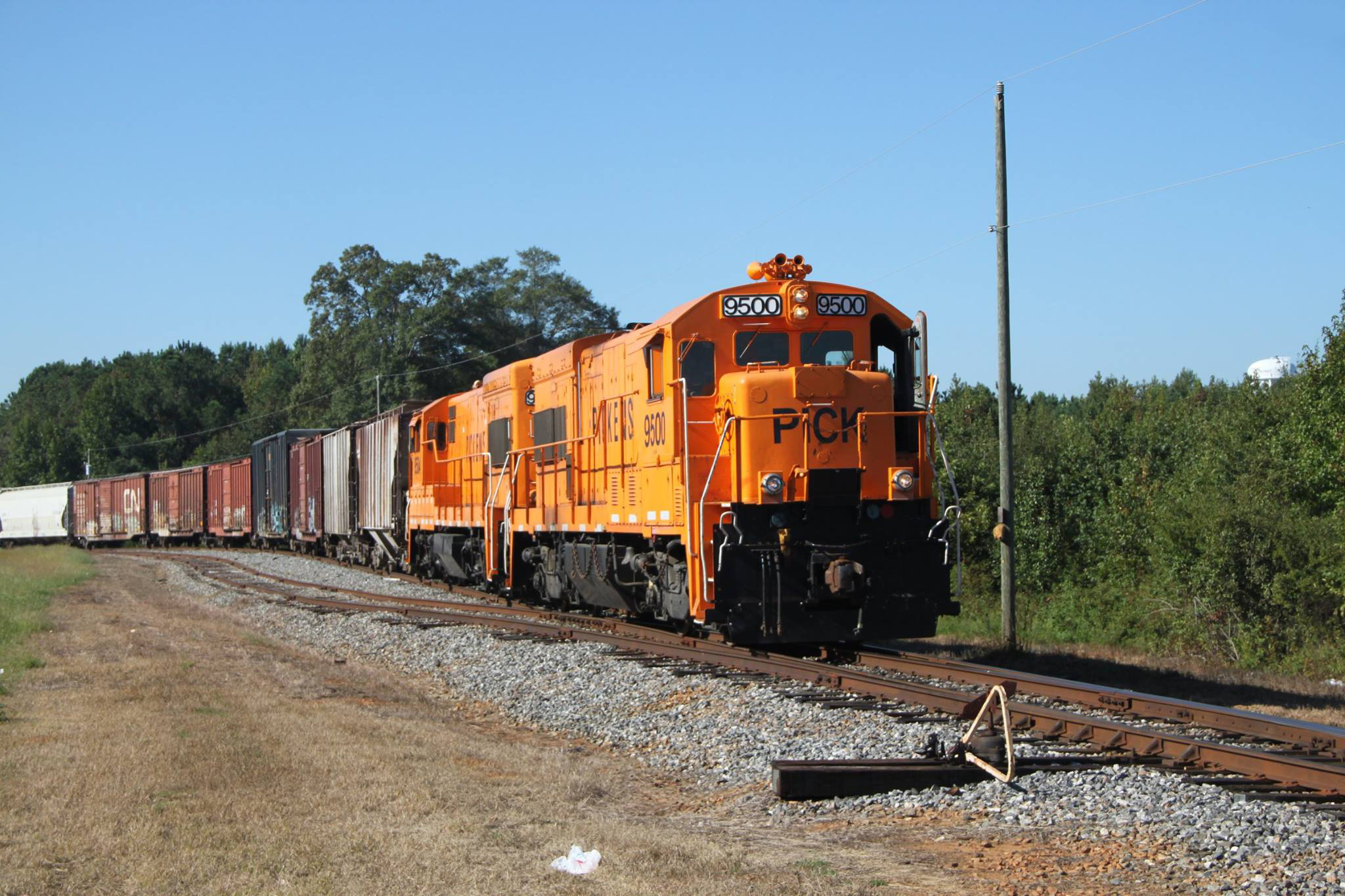 The same train as seen above near Gluck, South Carolina. Warren Calloway photo.

Singer grew its presence in the region when it purchased the Poinsett Lumber & Manufacturing Company that same year (1939), an operation which had just recently set up in the area in 1927 (it had also commenced with its own logging railroad to move timber to its mill near Pickens).

In the coming years Singer would consolidate some of its divisions, including its cabinet business and power-tool company, and relocate them near Pickens.

It also moved the railroad under the ownership of the Poinsett Lumber & Manufacturing Company, which continued to operate the shortline until 1963 when it was sold to a private individual from North Carolina. 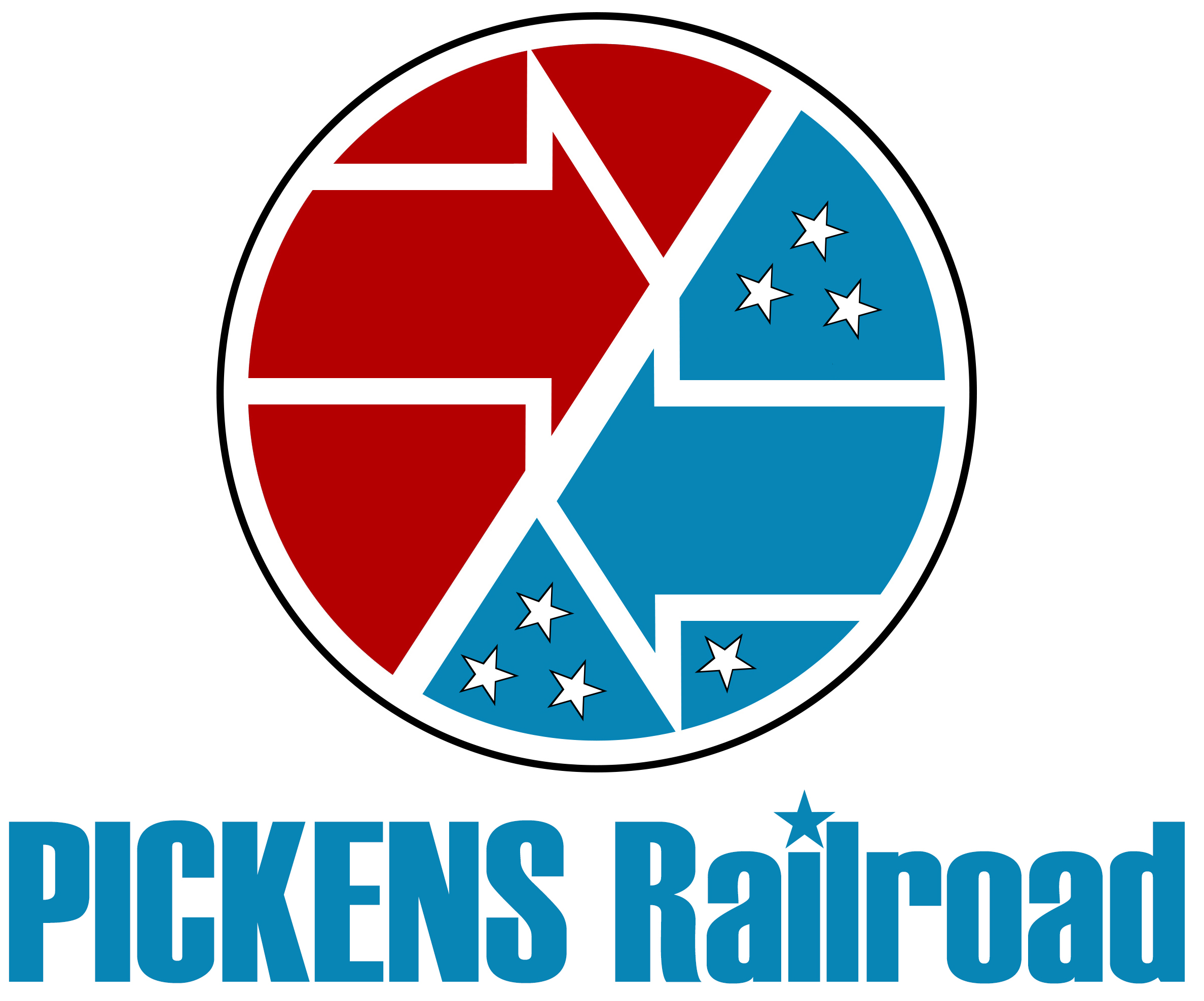 At this point the Pickens Railroad truly become a first class operation. Under new ownership the shortline expanded by building an engine house and carshops to increase its business opportunities by offering freight car repairs and rebuilds.

In 1973 the railroad was again sold, this time to the National Railway Utilization Company of Philadelphia (NRUC) which expanded the carshops to also offer full freight car manufacturing. 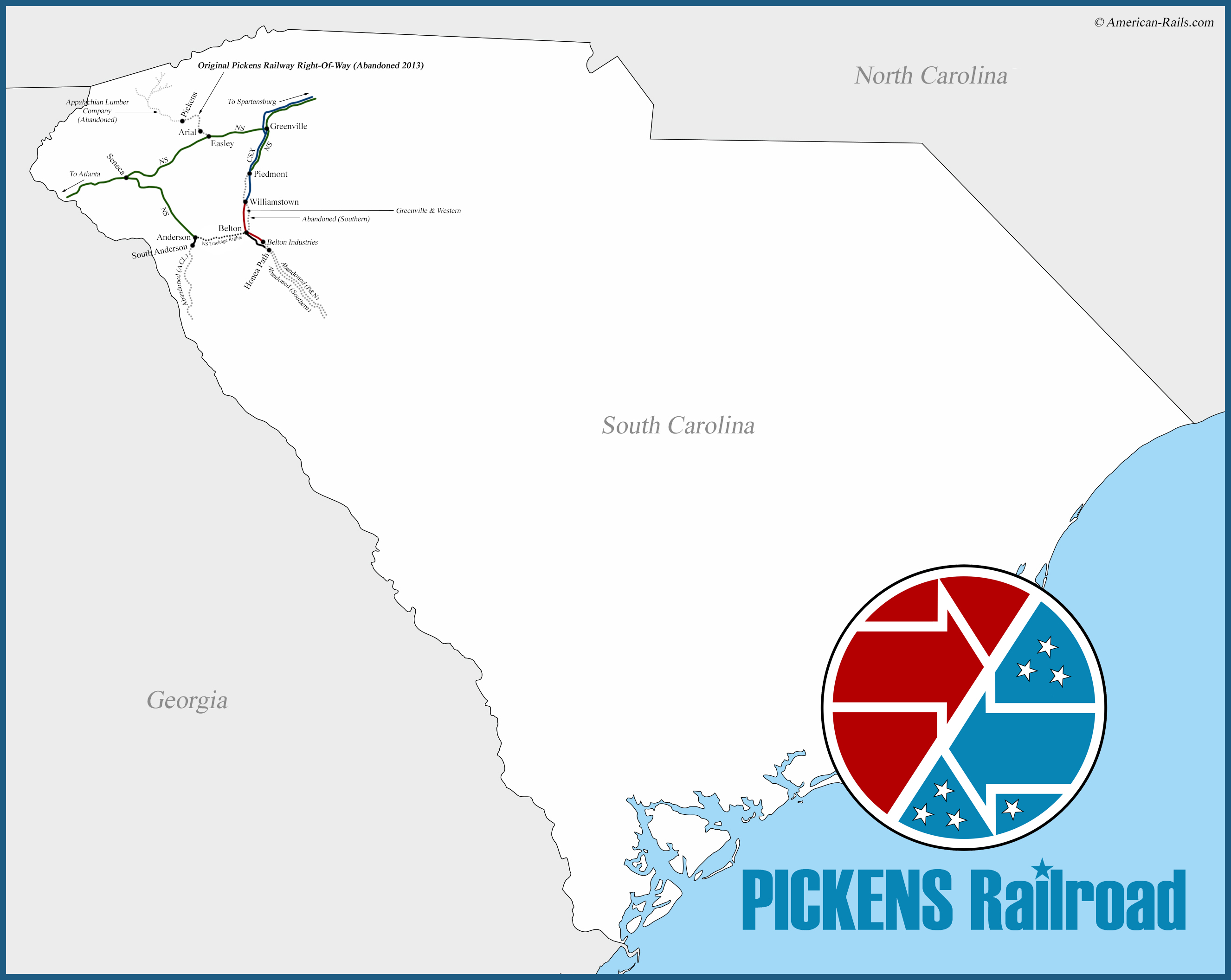 A current system map of the Pickens Railroad. Lines in black (including dotted trackage rights) are those in present-day use. The system's original right-of-way was abandoned in 2013. Author's work.

After owning the company for 23 years the NRUC sold it to the CLC-Chattahoochee Locomotive Corporation in the spring of 1996, which renamed the line as the Pickens Railway.

The short line gained an additional 28.5 miles of track (now the only segment in use) when, in the early 1990s, Norfolk Southern leased its branch between Anderson, Belton and Honea Path). 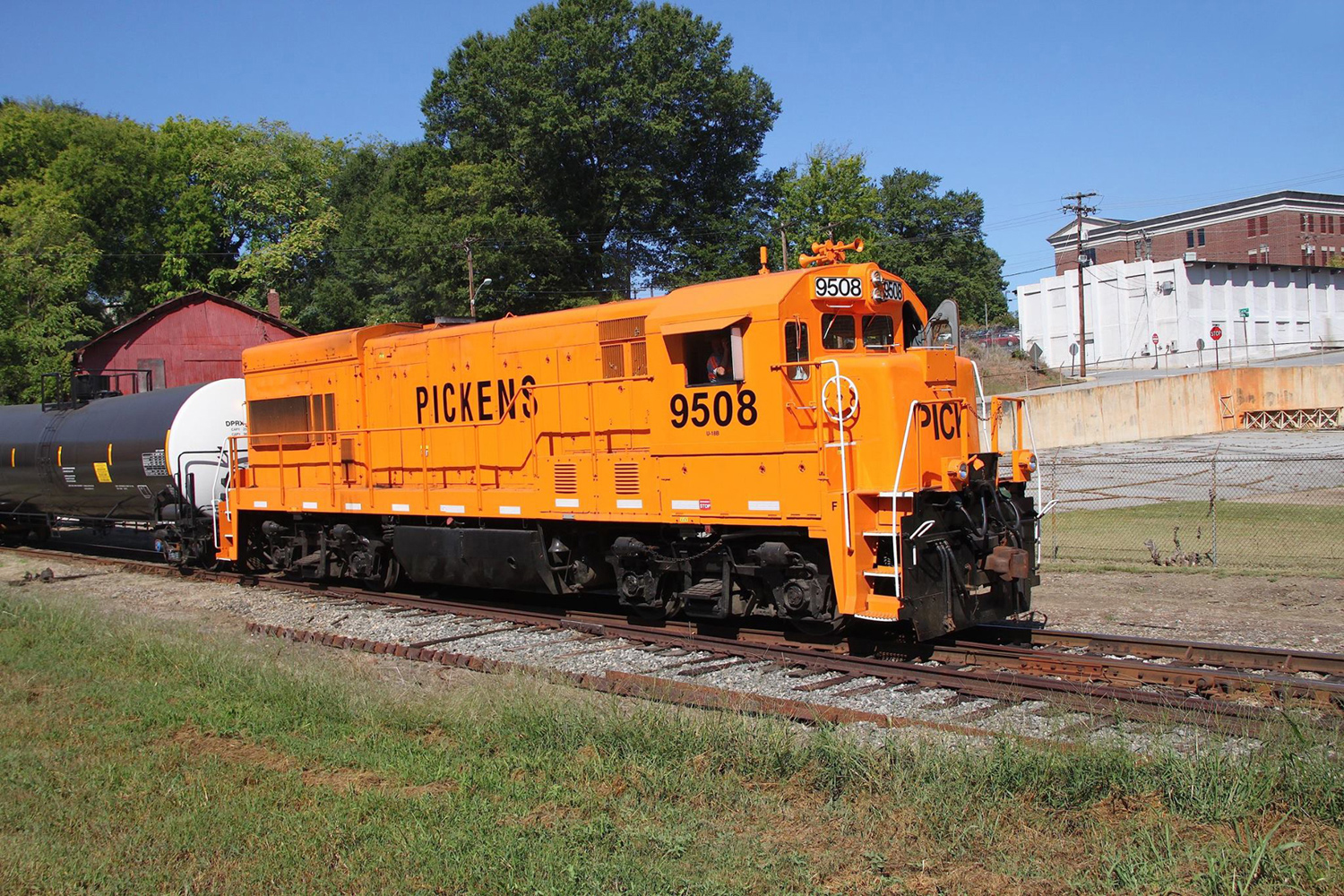 Following years of declining traffic on its original main line the railroad abandoned its route between Easley and Pickens, 9.9 miles, in 2013 and removed the tracks.

Today, the Pickens operates the former Southern property it acquired from NS along with a few short segments from CSX near Anderson that trace back to the ACL and Piedmont & Northern.

While the Pickens Railway has had a locomotive roster ranging from its largest steam locomotive type, the 2-6-2 Prairie, to Alco, EMD, and Baldwin diesel switchers. Its current active roster includes only General Electric U18Bs.