The Pinsly Company is a longtime operator of short line railroads and has been in the business since 1938 when it was started by Samuel M. Pinsly who purchased the small, washed out Hoosac Tunnel & Wilmington Railroad in Massachusetts and Vermont (also remembered as the "Hoot, Toot & Whistle").

The system would likely have been abandoned but his efforts to rejuvenate the line paid off.  Over the years Pinsly acquired and spun-off other lines (such as the historic Frankfort & Cincinnati in Kentucky). 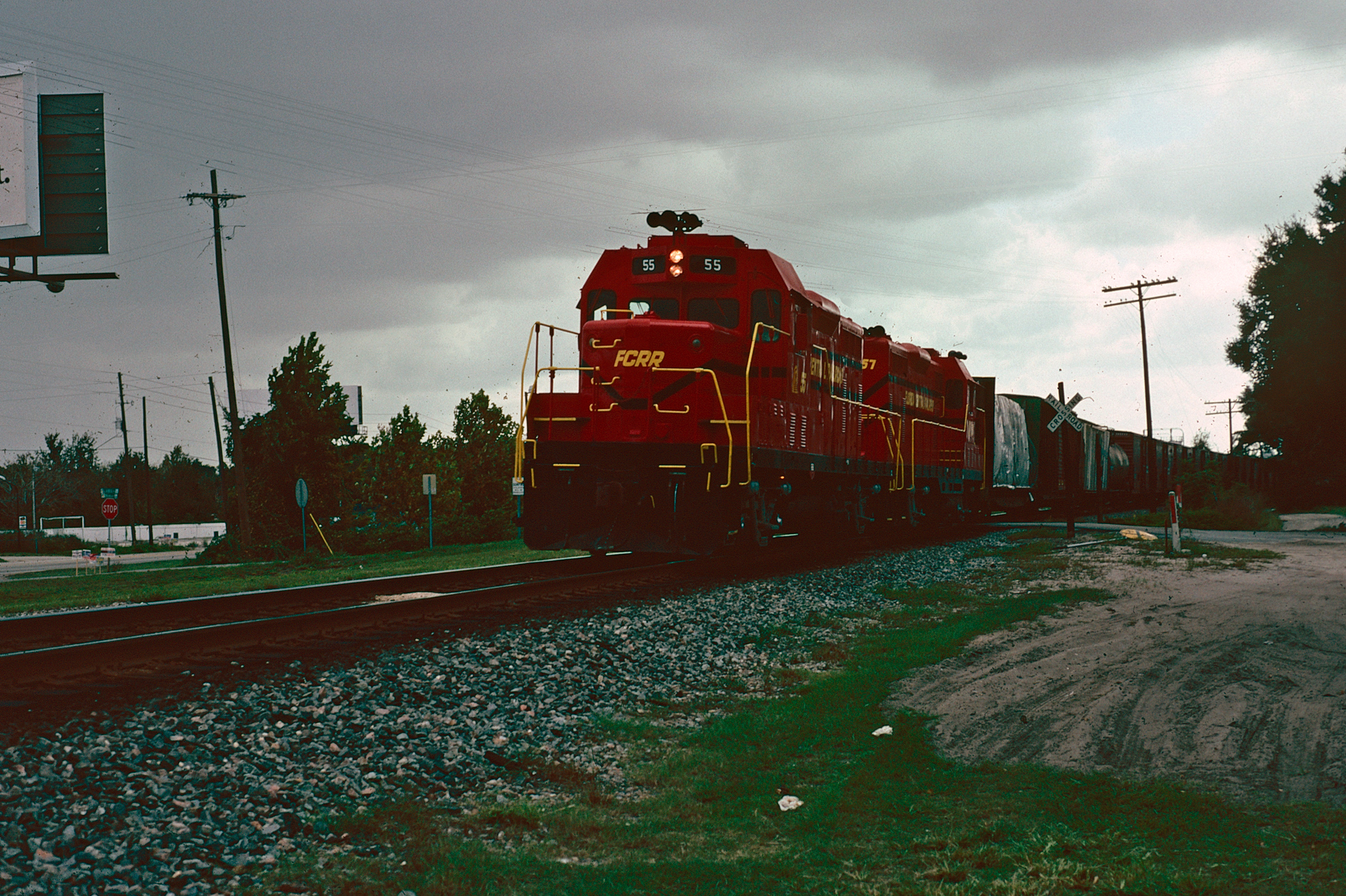 Featured here are the Floridian properties.

The Florida Central Railroad (FCEN), based in Plymouth, Florida, is a division of the Pinsly Railroad Company and has been in operation since 1986 when it took over ex-CSX trackage in the Sunshine State.

The railroad currently operates over 60 miles of track and serves over 65 customers in central Florida, including Orlando.

The Florida Central was the first of Pinsly's properties in the state as it would later add two other lines soon afterward the Florida Midland and Florida Northern.

Both of these railroads also operated over former CSX trackage with the latter being Pinsly's largest operating two unconnected sections of track north of the Florida Central system.

Between the three railroads they operate well over 100 miles of ex-CSX trackage and serve some 100+ customers along their particular areas of operation.

Traffic includes everything from food and chemicals to lumber and fly ash.

The Pinsly Railroad Company, based out of Massachusetts, itself has been in the railroading business for nearly 70 years focusing on short line operations, which it continues to do even today.

Overall the company operates seven short lines. Along with the three Florida systems they include the Arkansas Midland, Pioneer Valley, Prescott & Northwestern, and Warren & Saline River. Except for the Pioneer Valley these railroads are located in either Arkansas or Florida.

The Florida Central Railroad operates over trackage once owned by the Atlantic Coast Line.

Essentially a branch, this line diverges northwest from Orlando (and a connection with CSX) to connect town such as Winter Garden, Lake Jem, Sorrento, and Umatilla.

Under ACL ownership this line reached as far north as Altoona and did not end at Winter Garden as it does now. Instead, the trackage continued westward to Trilby where it connected with the railroad's western Florida main line (which is still in use by CSX).

After the formation of CSX Transportation in the mid-1980s the new carrier cut back the route to Winter Garden and also abandoned a few spurs to the north and south near the town (which served Howey and Phillips). 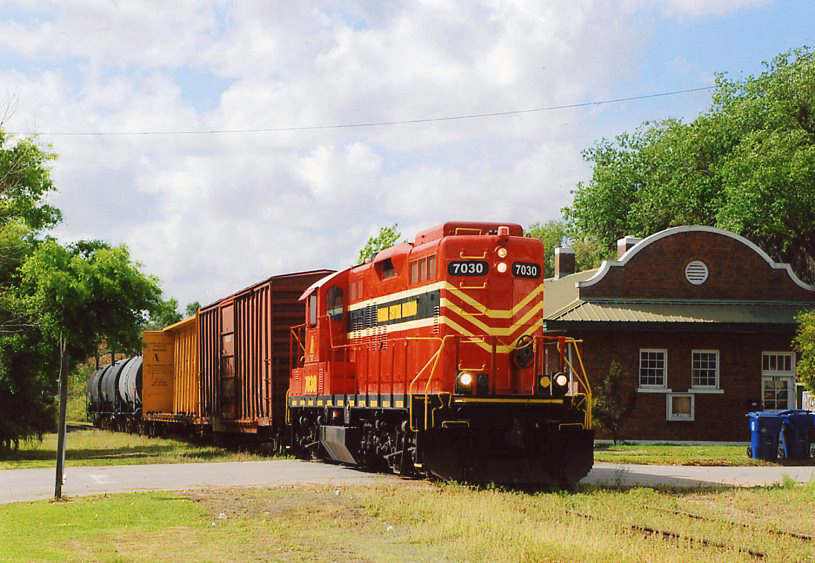 The deeper history of these lines dates back to before Atlantic Coast Line ownership when it they were known as The Plant System.

This railroad was controlled by Henry B. Plant for which it was named and its beginnings dating to 1879 when he purchased the bankrupt Charleston & Savannah Railroad and renamed it as the Savannah, Florida & Western Railway.

A few years later he incorporated the Plant Investment Company, which was meant to oversee ownership of the numerous railroads Plant would come to either own or charter himself.

There are far too many of these companies to list and describe in detail here so to keep things brief the Plant System would continue to grow through the late 19th century connecting to cities such as Tampa, Orlando, St. Petersburg, and Tallahassee by the 1890s.

The Atlantic Coast Line gained control of the railroad in 1902 and until the end Plant was still looking to expand his system, mostly by merging them into his Savannah, Florida & Western Railway.

The ACL connected to the Plant System at Savannah and much of the lines it came to operate south of the city, through Florida, were all once part of the Plant empire.

In the mid-1980s, not long after CSX's creation it began to shed large amounts of what it considered redundant trackage all across its system between Pennsylvania and Florida.

This included former ACL and SAL branch lines in the Sunshine State and in 1986 it sold much of the trackage to the Florida Central Railroad that it now operates.

In 1990 the railroad added about 8 miles of additional track from CSX although it cut back a few miles of line near Winter Garden in 1998 to reduce congestion the busy downtown area.

Currently the Florida Central Railroad has a locomotive fleet consisting entirely of EMDs (of note, the locomotives operate among all three railroads and are lettered for their respective railroad). 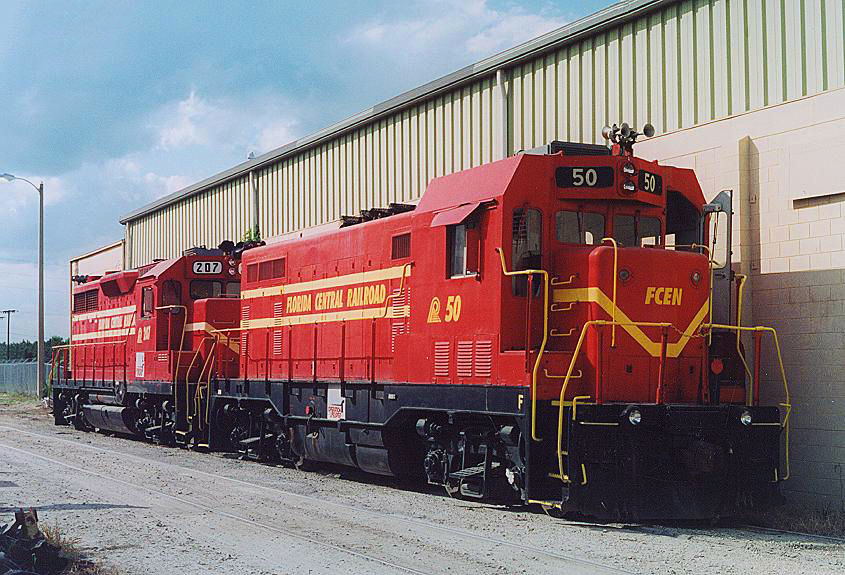 The Florida Midland Railroad (FMID), based in Plymouth, Florida, is a division of the Pinsly Railroad Company and has been in operation since 1987 when it took over ex-CSX trackage in the Sunshine State.

The railroad currently operates about 28 miles of track on two unconnected lines serving over 25 customers along with providing transload services via its sister company, the Railroad Distribution Services of Florida.

The railroad is Pinsly's smallest in the state as it also operates two other lines, the Florida Central and Florida Northern.

Both of these short lines also use trackage once owned by CSX and are located north of the Midland.

In total, Pinsly's lines in Florida includes more than 100 miles of railroad, most of which is operated by its northern most subsidiary, the Florida Northern (interestingly, the last railroad it acquired in the state).

The Pinsly company itself is headquartered in Massachusetts and has a history which dates back to before World War II.

Its business model has always remained the same, purchase defunct or wanted rail lines that have potential and return them to profitability.

The company has its beginnings in 1983 when it was founded by Samuel M. Pinsly to purchase the Hoosac Tunnel & Wilmington Railroad located in Vermont and Massachusetts (the railroad was also known as the "Hoot, Toot, & Whistle."

The railroad dated back to the Deerfield Valley Railroad of 1884 and at its peak operated about 25 miles of track between Hoosac Tunnel, Massachusetts and Wilmington, Vermont.

It went through a few owners in the 1920s before Pinsly acquired it in 1937, at which point he created is new business, the Pinsly Railroad Company a year later.

Before the Staggers Act and deregulation in 1980 the company looked to purchase or overhaul lines until to increase efficiency and turn a profit.

After the act became law they simply began to start their own shortlines as Class Is could now more easily shed unwanted to track (and there was a lot of this in 1980).

Its first company was the Pioneer Valley Railroad of 1982, which operated two branches north of Westfield (a town which Pinsly would also call home in 1986).

Soon afterward they added one line after another before, aside from the Florida properties, operating short lines in Arkansas including the Arkansas Midland, Prescott & Northwestern and Warren & Saline River.

Pinsly also operates a successful transloading business mentioned before, the Railroad Distribution Service with locations in Massachusetts and Florida.

As for the Florida Midland Railroad, Pinsly acquired its track from CSX Transportation a year after it had started the Florida Central in 1986.

When the shortline first began operations it had three branches; between Leesburg and Wildwood, between Frostproof and Lake Whales, and finally between Gordonville and Winter Haven.

In 2000, however, citing lack of customers Pinsly successfully petitioned the Surface Transportation Board to abandon the Leesburg branch.

Currently the Florida Midland Railroad has a locomotive fleet consisting entirely of EMDs (of note, the locomotives operate among all three sister lines and are lettered for their respective railroad).

The Florida Northern Railroad (FNOR), based in Plymouth, Florida, is a division of the Pinsly Railroad Company and has been in operation since the late 1980s.

The railroad operates former CSX trackage and was Pinsly's last section of line it obtained from the Class I (in the mid-1980s it acquired trackage northwest of Orlando it named the Florida Central and soon after it picked up three small nearby branches became the Florida Midland).

Like its counterpart short lines, the Northern operates on former Atlantic Coast Line trackage along part of the fallen flag's former main line in the western part of the state.

The FNOR is also the Pinsly's largest short line in the state as it runs on more than 100 miles of unconnected lines north of its counterpart, the Florida Central.

The history of the Pinsly Railroad Company dates back to 1938 when it was founded by Samuel M. Pinsly to do something rather radical for the time, operate and revive unwanted branch lines and/or railroads if there was potential profitable available with them.

Mr. Pinsly got his start in the business when he purchased the unwanted Hoosac Tunnel & Wilmington Railroad in 1937 allowing him to set up his business officially a year later.

He was able to turn a profit with this 25-mile line although by the early 1970s its viability had run its course and the remaining portion was abandoned.

Still, by that point Pinsly had become a respected in business in the short line industry, particularly when the idea of owning a family of small railroads was rather unusual.

After deregulation in 1980 the Pinsly company began to expand its operations significantly as the Staggers Act allowed Class I systems to more easily abandon branches and secondary lines which were either no longer profitable or did not meet expected return.

It began in 1982 when it took over two branches from Conrail. A few years later in 1986 it purchased the first ACL branch from CSX (the Florida Central), and in the following two years picked up two additional segments (the Florida Midland in 1987 and finally the Northern in 1988).

The trackage that CSX sold Pinsly to become the FNOR was part of the Atlantic Coast Line's western Florida route connecting Dupont, Georgia with Tampa, St. Petersburg, and Naples.

However, this track dated back much further than the ACL and has its beginnings as part of The Plant System, which became part of the Coast Line in 1902 (the Plant lines would make up most of the ACL's Florida trackage). 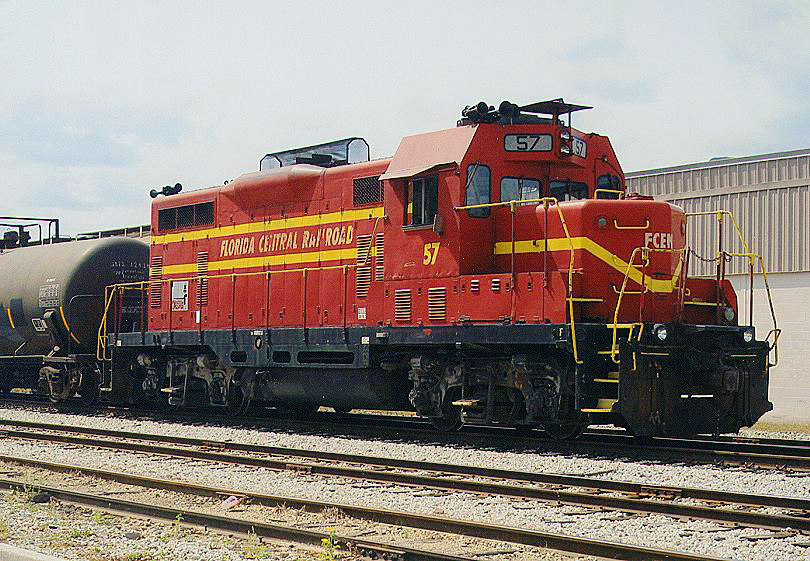 FCEN GP7u #57, rebuilt by the Santa Fe with a low-nose for better visibility at its Cleburne shops in the 1970s, switches the yard in Orlando on March 13, 2009. Doug Kroll photo.

Upon CSX's start-up in the mid-1980s it was looking to reduce duplicate or unprofitable routes and branches all across its system.

Being that the Class I had so much trackage in Florida of ACL and Seaboard Air Line origin it downsized property it felt that it no longer needed.

In doing so, the FNOR got two sections of ACL trackage; between High Springs and Red Level Junction (it connected to CSX at Newberry), and between Lowell and Candler (with an interchange to CSX at Ocala).

Also, for a complete roster please check out the below table (please note that all three lines use power from this roster and also are painted in virtually identical liveries, save for different reporting marks).