Arguably, one of the Pennsylvania's finest trains it ever operated was the crack Pittsburgher, an overnight service connecting the Steel City with New York via the railroad's principal main line between those two points.

Originally launched during the mid-1920s, for many years the train pampered an elite clientele of businessmen and executives.  Despite its regional status the crème de la crème, "All Pullman" Pittsburgher was one of the first PRR trains to receive streamlining during the late 1930s.

Unlike many other Pennsy trains, patronage remained strong through the declining postwar years.  Unfortunately, the interstate and airlines eventually caught up with the Pittsburgher and ridership sank precipitously by the early 1960s prompting the PRR to cancel it a few years later.

The name Pittsburgher first appeared on PRR's timetable on May 28, 1916 as a westbound-only, daytime regional (train #61) connecting Philadelphia and Pittsburgh according to the Pennsylvania Railroad Technical & Historical Society.

However, the train best remembered carrying that name was inaugurated on January 14, 1924 as an overnight, extra-fare (discontinued in April of 1932), all-Pullman service. 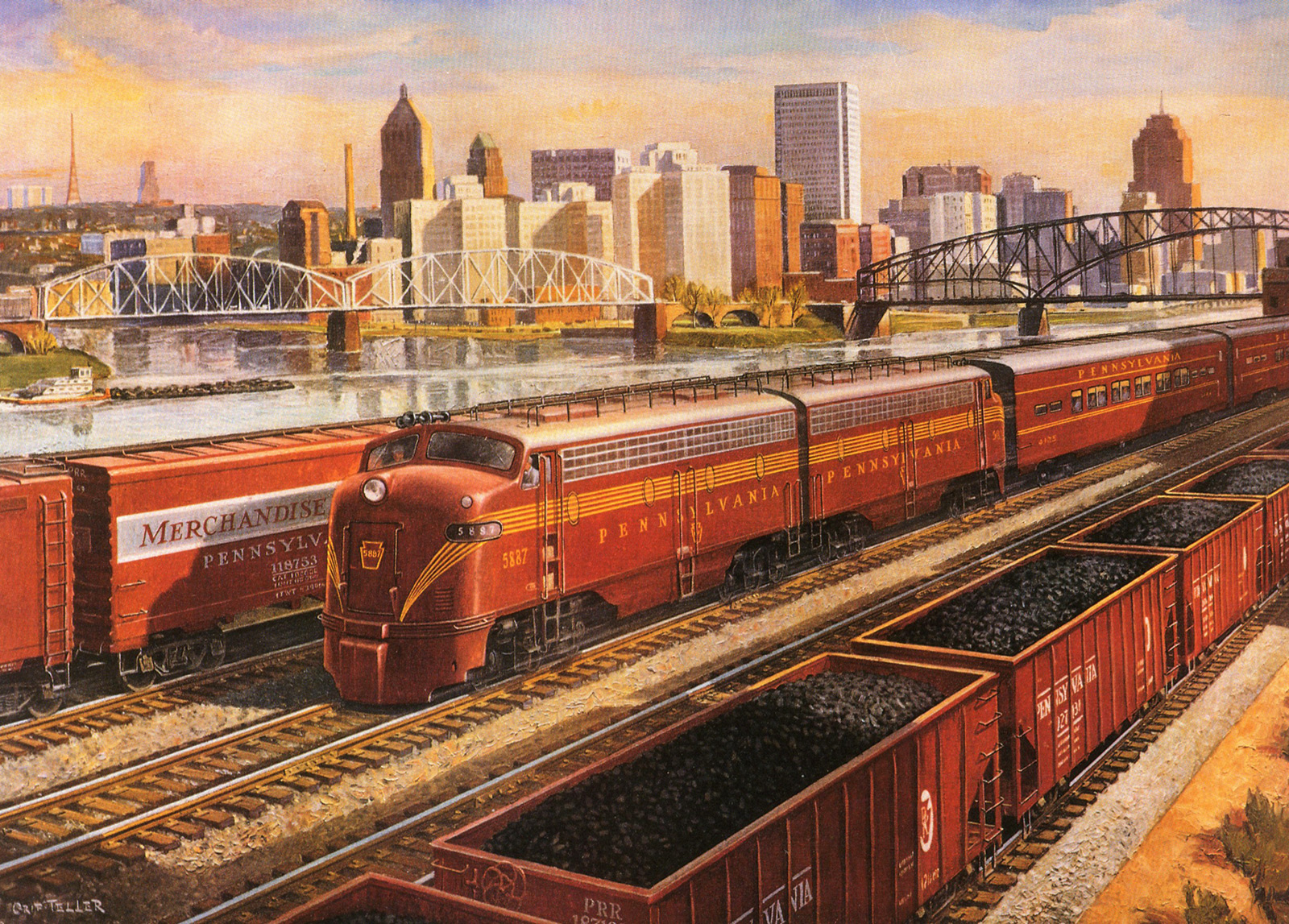 Because of its direct connection to the Big Apple and the industrious city of Pittsburgh (then of course noted for its production of steel among other products), the Pittsburgher quickly became the top choice for business travelers wishing to arrive at their destination by the next morning.

More so, the PRR had virtually no competition in this market; New York Central's access into Pittsburgh was essentially a branch via subsidiary Pittsburgh & Lake Erie while the Baltimore & Ohio's route was simply far too circuitous (it also never reached downtown Manhattan). The Pittsburgher was listed on Pennsy's timetable as trains #60, eastbound, and #61 westbound.

In time, it became one of the railroad's most important trains but not only because it sold out on a nearly nightly basis.

According to Harry Stegmaier, Jr.'s book, "Pennsylvania Railroad: Passenger Trains, Consists & Cars - 1952 Volume I," a number of Pittsburgh steel tycoons and financiers also sat on PRR's board of directors.  As such, they expected the train to utilize the very best of equipment.

When the railroad's new streamliners, the legendary "Fleet Of Modernism," debuted in the summer of 1938 the Pittsburgher was not far behind in receiving such sleek, elegant equipment which arrived in 1939 according to Mike Schafer and Brian Solomon's book, "The Pennsylvania Railroad."

It was the first New York - Pittsburgh train to receive such cars while other notables on the route included the Duquesne, Iron City Express, Juniata, New Yorker, and Pittsburgh Night Express.

The Pittsburgher, for obvious reasons, ran a very fast schedule as business travelers expected to arrive in their respective city by breakfast the following day for morning meetings.

Mr. Stegmaier goes on to note that some companies, such as U.S. Steel and Kaufmann's Department stories, blocked out sections of the train five nights a week.

In both directions the Pittsburgher departed late at night between 11 PM and Midnight, offering limited stops along the way and reaching its destination in about nine hours on the 440-mile corridor.

After World War II the train continued receiving new equipment and through the early 1950s continued to sell out regularly, averaging nearly 150 passengers every trip.

Additionally, the train handled a 10-section/1-compartment/1-drawing room sleeper as well as a 10-roomette/6-double bedroom sleeper from Roanoke via the Norfolk & Western at Hagerstown, Maryland and delivered to Harrisburg where they joined eastbound, #60.

It is interesting to note that while the train did not operate during the dinnertime hour its diner remained opened for some time and still saw use offering early arrivals light meals, such as sandwiches.

Throughout the years the Pittsburgher never lost its elite, "All Pullman" status even as patronage disappeared throughout the 1950s.  During this time the train still maintained a strong following but even it began feeling the effects by the 1960s.  The PRR looked for ways to reduce the train's losses, including outright cancellation.

By then, it less than half the ridership from just a decade earlier.  Amid much reluctance, and with agreement by some of the directors, its cars were transferred to other trains including the eastbound Manhattan Limited and westbound Pennsylvania Limited.

The once-proud Pittsburgher made its final run on September 13, 1964, at which time it handled no more than a baggage, three sleepers, and a diner.  You can read more about other PRR trains by visiting the Pennsylvania Railroad section of the site, which can be reached from the top of this page.