The Palmetto is often associated with Amtrak's present-day service between New York and South Florida.  However, long ago this same name was given to a new train launched by the Atlantic Coast Line during the early 1940s connecting the Big Apple with eastern Georgia.

Under the ACL's direction the Palmetto offered passengers numerous amenities providing a consist of Pullmans and coaches that was predominantly heavyweight in nature, at least until the train's late era when most had been retired (it became noteworthy for fielding heavyweights for many years).

As ridership declined a number of accommodations were lost although it survived until a year after the Seaboard Coast Line merger when the Palmetto was removed from the timetable.

The Atlantic Coast Line added what was then known as the Palmetto Limited to its timetable during the summer of 1942, likely as a means of providing more services for the rush of wartime demand in moving troops and other passenger movements related to the war effort.

The new train was listed as #77 (southbound) and #78 (northbound) providing service between Boston/New York and Savannah, Georgia.

As always, such a schedule was dependent on help from several partnering roads; the New Haven handled the train between Boston and New York where the Pennsylvania carried it to Washington, D.C.; from there the Richmond, Fredericksburg & Potomac handled it to Richmond at which point the ACL picked it up for the remaining journey south to Savannah.

Interestingly, in 1944 the railroad embarked on an endeavor to shorten the names of several trains; the Palmetto Limited became simply the Palmetto and the Coast Line Florida Mail was shortened to just the Florida Mail.

There was also a change for the flagship Champions; when first launched they had been known as the Tamiami Champions but were later regarded as simply the "East Coast" Champion and "West Coast" Champion to reflect which part of Florida they served.

According to Larry Goolsby's book, "Atlantic Coast Line Service: The Postwar Years," the Palmetto would depart New York early in the afternoon (the Boston section left around breakfast) and arrived in Savannah around lunchtime with a schedule of just under 24 hours.

Since the Palmetto was always considered a secondary train it often ran with a lot of head-end mail/express within its consist.  The ACL also regarded it as a "Coach-Pullman Train."

For instance, according to the company's December, 1956 timetable a typical consist would include reclining-seat coaches, a full diner, café-lounge, and up to seven sleepers.

While the railroad acquired a large batch of lightweight, streamlined cars after the war the Palmetto was not assigned many of these for years and still ran predominantly heavyweight through the early 1950s; in fact, the train carried one of ACL's last heavyweight sleepers still in service through early 1959, a car offering 6-section/6-double bedroom accommodations.

By the 1960s even the ACL was feeling the affects of declining ridership and began cutting back services; for the Palmetto it lost its Savannah-Washington sleeper during February of 1964, leaving it only sleeper service via its connecting train to Augusta (it also carried a connecting sleeper to Wilmington but this service operated on the West Coast Champion during the summer).

During the summer of that year more cutbacks ensued as the train's southern terminus became Florence, South Carolina.  As Mr. Goolsby's book notes it appears the train's primary purpose from then until its demise was carrying through cars for connections to Wilmington an Augusta.

As a result, not much happened for the Palmetto from then on, as it quietly carried on in its secondary role.

According to one of the ACL's last public timetables, the train's consist in the spring of 1967 included five reclining-seat coaches, a parlor, bar-lounge, the Washington-Wilmington sleeper (10-roomette/6-double-bedroom), and a café-lounge for the connection between Florence and Augusta.

During the summer of that year the Seaboard Coast Line was formed through the merger of ACL and SAL.  As the new railroad prioritized its remaining passenger operations, not surprisingly the Palmetto was eventually removed, making its final run under the SCL on December 30, 1967 although its Florence-Augusta connection still ran and, timed with the Champion.

If the Palmetto sounds like a southern train that's because it very much is, connecting New York City with Savannah, Georgia. The name itself comes from the Sabal palmetto tree, common in the south, and the state tree of South Carolina.

The train was a creation of Amtrak in mid-1970s although it actually dates back to a southern line that operated a named streamliner of the same name along a very similar routing. In general, Amtrak has had success with its southern trains (just as railroads like the Atlantic Coast Line and Seaboard Air Line did) and upon creating the train once again saw its demand surge.

Today, it operates somewhat in tandem with the Silver Service trains although it is not included as part of that marketing terms (both of those routes continue on southward and deep into Florida). In recent years the Palmetto has seen ridership slowly increase and as such Amtrak will likely retain it as a through route for a long time to come.

The history of the Palmetto can be traced back to the Atlantic Coast Line. The southern railroad was well known for its streamliners to Florida, such as the Champion, Florida Special, and Havana Special (operated jointly with the Florida East Coast to Key West until 1935).

The train was originally known as the Palmetto Limited and inaugurated by the ACL in 1909 as an exquisite, through sleeper that connected New York City, Washington (D.C.), and Tampa (Florida) operated in conjunction with the Pennsylvania Railroad.

Few expenses were spared with the on board amenities provided with heavyweight parlors, lounges, diners, and full Pullman service included.  Essentially, it was tailored for those with the means to travel so lavishly although technically the railroad intended the train to be used for business travelers.

For power the Palmetto Limited used a Class P-5a 4-6-2 Pacific and operated on a 32.5 hour schedule, quite fast at the turn of the 20th century for a route that was more than 1,300 miles in length. For the next 30+ years little changed with the train in terms of consist and accommodations.

However, during the mid-1930s the train had a change to its routing. No longer would it operate to Florida but truncate at Savannah. Then, in 1942 a major upgrade came in the way of diesel power and regal streamlining.

In  early 1939 the ACL had debuted its first streamliner to Florida, the Champion, and its amazing success spurred the railroad to continue equipping the rest of the fleet in such a manner. In 1942 this included upgrading the Palmetto Limited, which received lightweight cars adorned in the ACL's new purple, silver, and yellow livery and powered by an Electro-Motive Corporation E6A diesel.

Four years later the train saw its name changed to just the Palmetto in 1946, and it remained as this for the next 20 years. With the merger of the Seaboard Air Line and Atlantic Coast Line in July, 1967 to create the Seaboard Coast Line the train was not retained within the passenger fleet ending nearly 60 years of continuous operations.

When Amtrak began on May 1, 1971 there was little thought given to the long defunct ACL train. However, with the continued success of the SCL's former Silver trains, the Silver Star and Silver Meteor, it was decided revive the old name.

On June 15, 1976 Amtrak reintroduced the Palmetto from New York to Florida. The train became quite successful and before then end of that year was extended to Miami.

Interestingly, it was the first train to serve the southeast to use Amtrak's new Amfleet cars with usual power in those days provided by EMD F40PHs. Despite its success the train offered little more than coach service for many years, which interestingly has not changed significantly today.

During the 1980s the train saw several changes such as being combined with the Carolinian twice at different times between New York and Richmond, as well as adding Jacksonville as a stop in the late 1980s. By the early 1990s the train had reached all of the way to Tampa.

However, the train was cancelled on February 1, 1995 due to funding issues. It returned later in the decade as the Silver Palm but returned to its original name in 2002 as the Palmetto and a routing back to Florida. 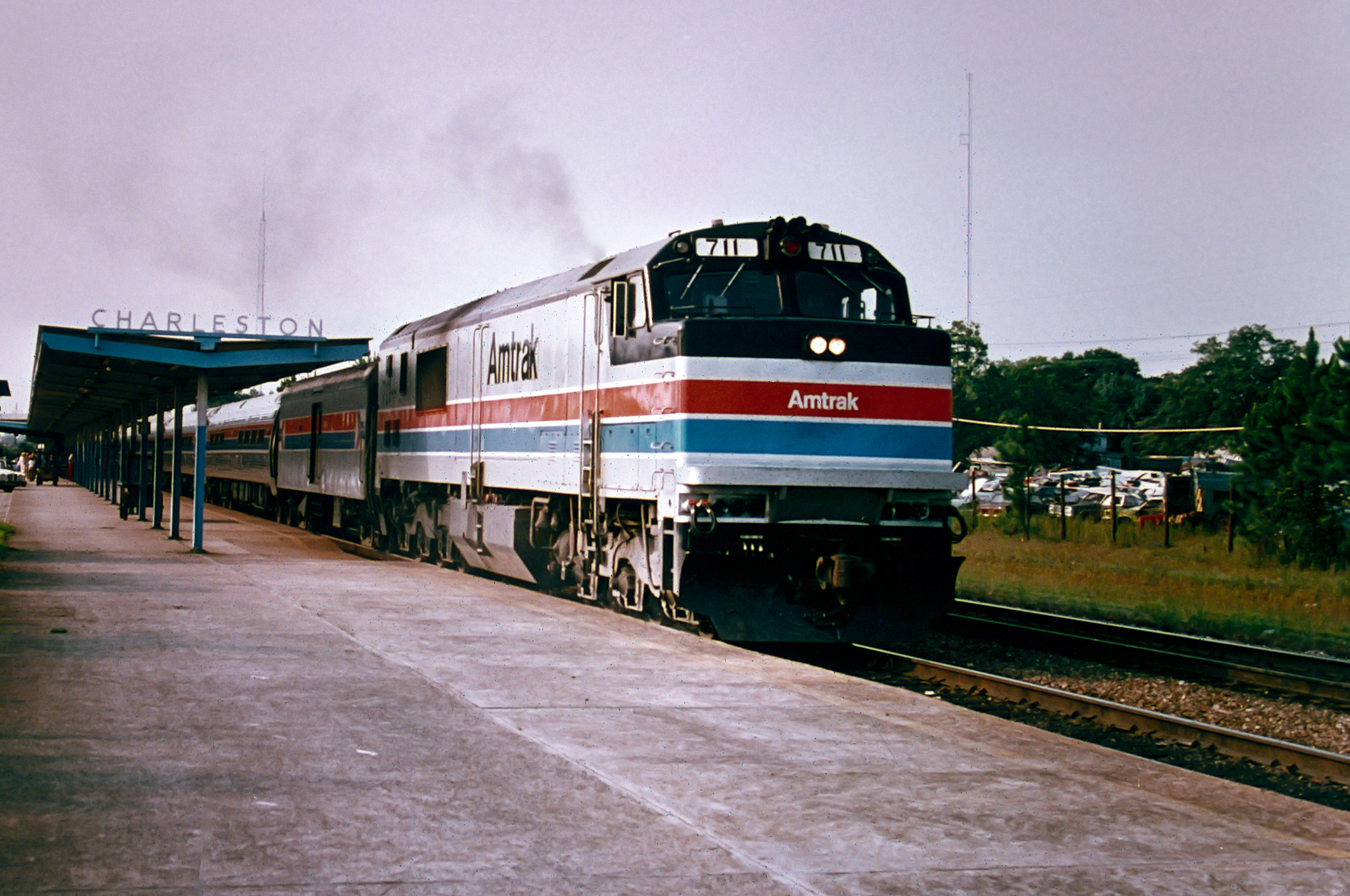 Today, the train operates only as far south as Savannah with the Silver Service trains providing passengers the ability to reach the Sunshine State.

A typical consist still only includes standard and business class coaches along with lounge service and, of course, baggage accommodations. Power, as with virtually all intercity Amtrak trains is now provided by General Electric Genesis series diesels.

Perhaps if the Palmetto offered more on board amenities to passengers it may see higher ridership but in any case it currently carries nearly 200,000 patrons annually.  There, the carrier provides a downloadable timetable that includes everything available on the train as well as its counterparts, the Silver Meteor and Silver Star.