Before Union Pacific's streamliners wowed the public the railroad operated several other trains during the heavyweight era serving their most important cities such as Denver, Portland, and Los Angeles.

The Portland Rose was one of these, established during the era of the Great Depression as a renamed version of an earlier train.  It was quite lavish providing all of the on-board amenities one might expect during that era.

Once the City of Portland debuted a few years later the Rose lost its lofty status on the route but nevertheless remained an important train.  During the late 1940s diesels came at which time it began carrying some streamlined equipment.

Despite Union Pacific overhauling, changing, and reworking its passenger fleet several times throughout the 1950s and 1960s the Rose remained on the timetable until the start of Amtrak in 1971.

UP ushered in its new train, the Portland Rose on September 12, 1930 as its top train to the Pacific Northwest listed as train #17 (westbound) and #18 (eastbound). 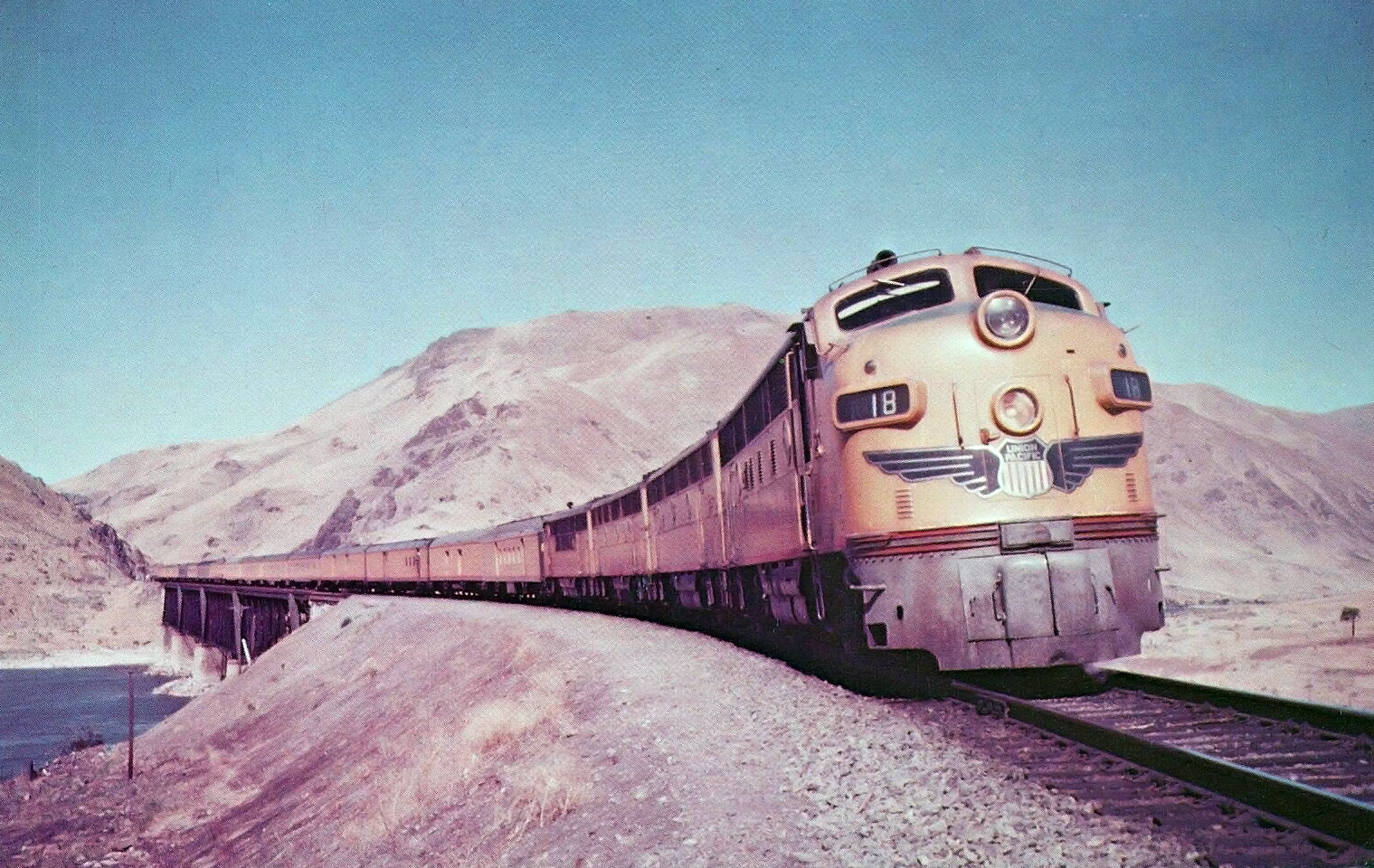 In reality it was simply the rechristened Portland Limited albeit offering upgraded features more closely tailored to the "City of Roses" for which it was named.

The train was one of only two on the railroad to include its own, exclusive china pattern (featuring a rose motif of course!) with the Columbine being the other.

It was advertised in newspapers across the country, including the Pittsburgh Press which had this to say about the new Rose in its September 28th edition:

"The Union Pacific Railroad has recently added a newly equipped...train, the Portland Rose, to its Chicago-Portland service, naming it in honor of Portland's favorite flower." 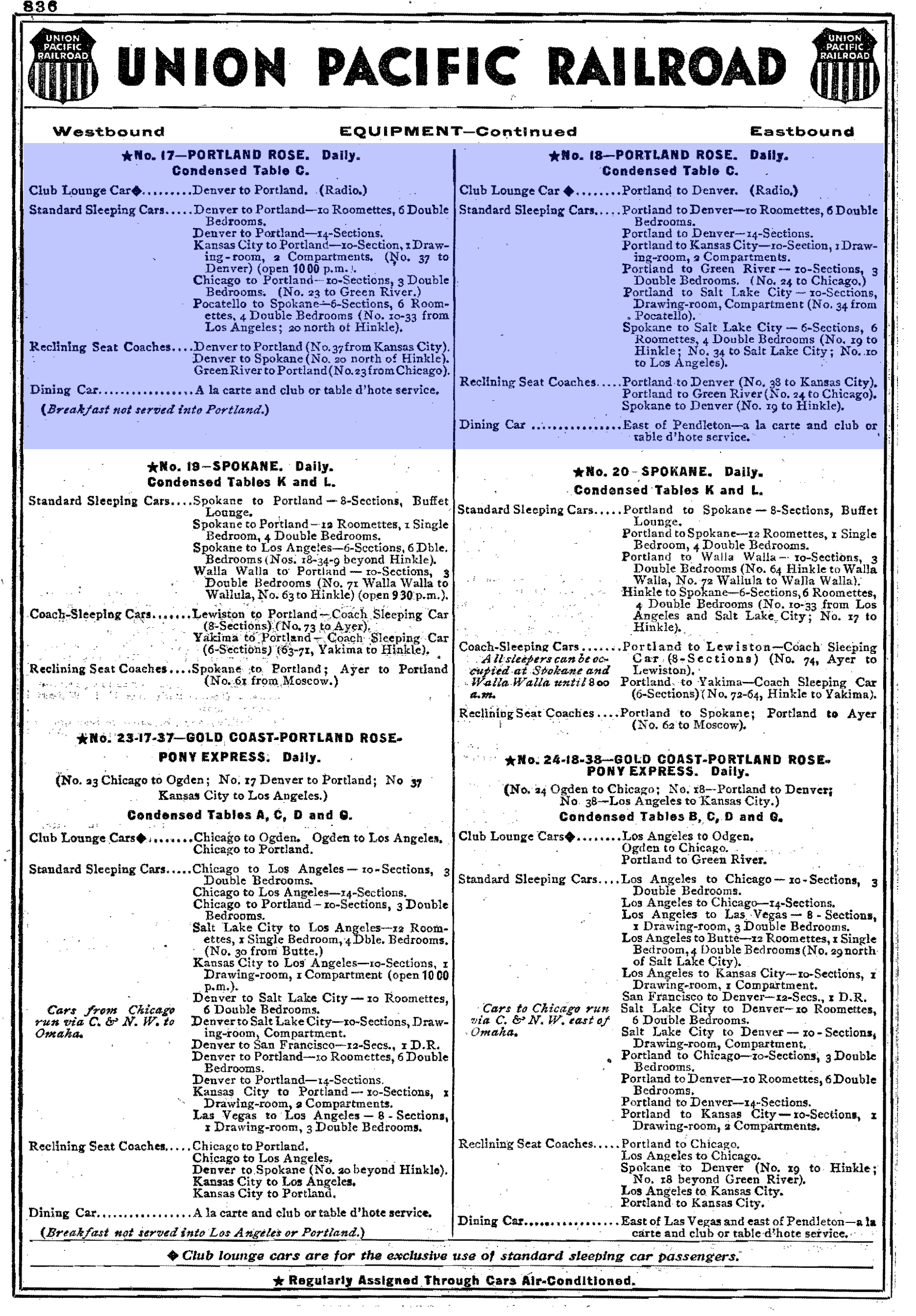 "The rose motif is employed in all the decorations and tints of rose and green recur frequently in the color scheme.  The attractiveness of the deluxe passenger coaches is enhanced by large hand-colored photographs of Pacific Northwest scenery which have been placed in the car.  The new dining cars are decorated in a color symphony of rose, green, and cream."

"The matched Pullmans are all of the new all-steel construction.  The crowning feature of the train is the observation car containing a bathroom, with tub, shower and clothes closest; a barber shop; and a completely equipped soda fountain.  Valet service is also available.  The forward lounge contains a radio, and in the rear is a glass enclosed sun parlor.  This new train provides through service to Portland, Tacoma, and Seattle." 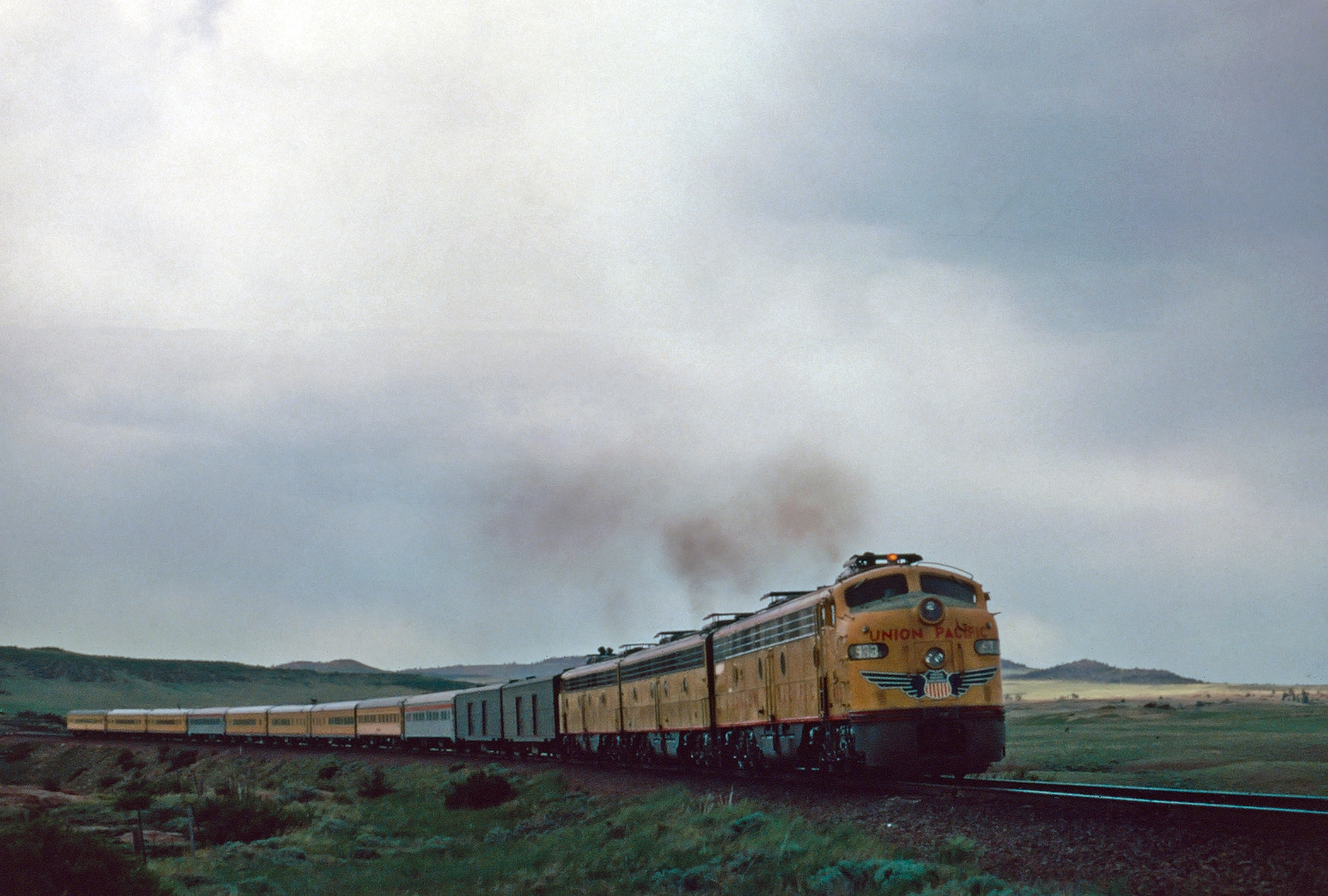 Union Pacific E8A #933 with what appears to the "Portland Rose" in Idaho during the 1960s. American-Rails.com collection.

The train lost a bit of its allure after UP put the new City of Portland streamliner into service on June 6, 1935 although it continued to remain an important train.

A 1941 pamphlet Union Pacific released highlighting the Rose gives you a good idea of just the kind of services one could expect aboard the train, which the railroad labeled as "A Triumph In Train Comfort."  Aside from the perks already mentioned the Rose carried a club lounge (the "Portland Club"), fine dining, climate-controlled cars (air-conditioning), and a nurse-stewardess.

There were normally four standard Pullman sleepers running within the consist, two of which ran through to Kansas City and Chicago.  To read the entire pamphlet in detail please click here.

The Rose spent much of its time in service operating with heavyweight equipment including as many as eight head-end cars (mail/express and a Railway Post Office [RPO]), three coaches, a diner, and the previously mentioned club-lounge and four sleepers.

At first these cars were clad in standard Pullman green to match the Pullman-owned equipment.  However, by the late 1940s they wore a matching two-tone grey livery.  This short-lived scheme disappeared by the early 1950s, replaced by Union Pacific's classic Armour Yellow and grey.

Steam power (primarily Class FEF 4-8-4s and Class MT 4-8-2s) was also largely gone by then, supplanted by diesels in the form of Electro-Motive F3s (a few were equipped for passenger service) and E7s along with Alco's beautiful PA/PB model. 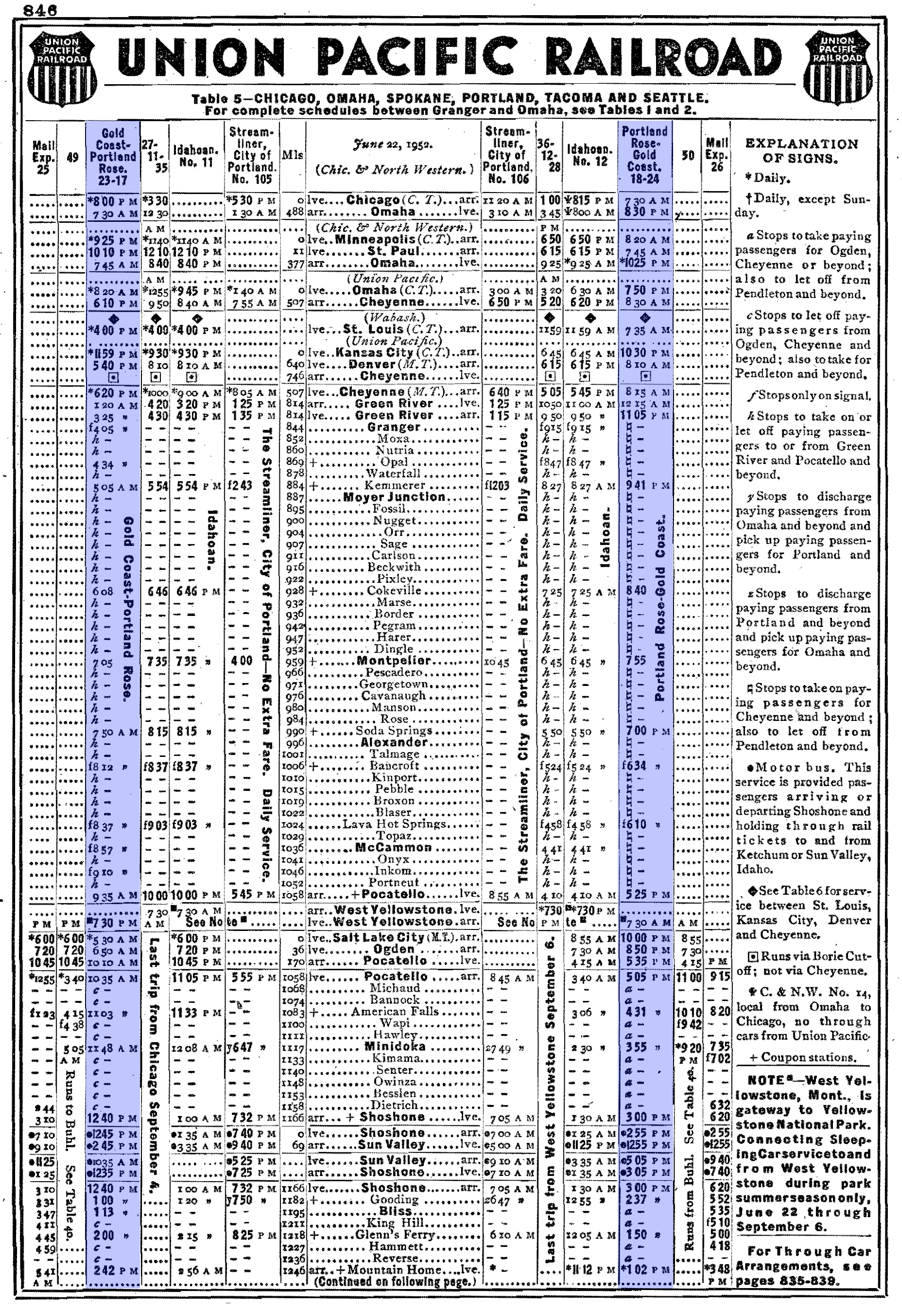 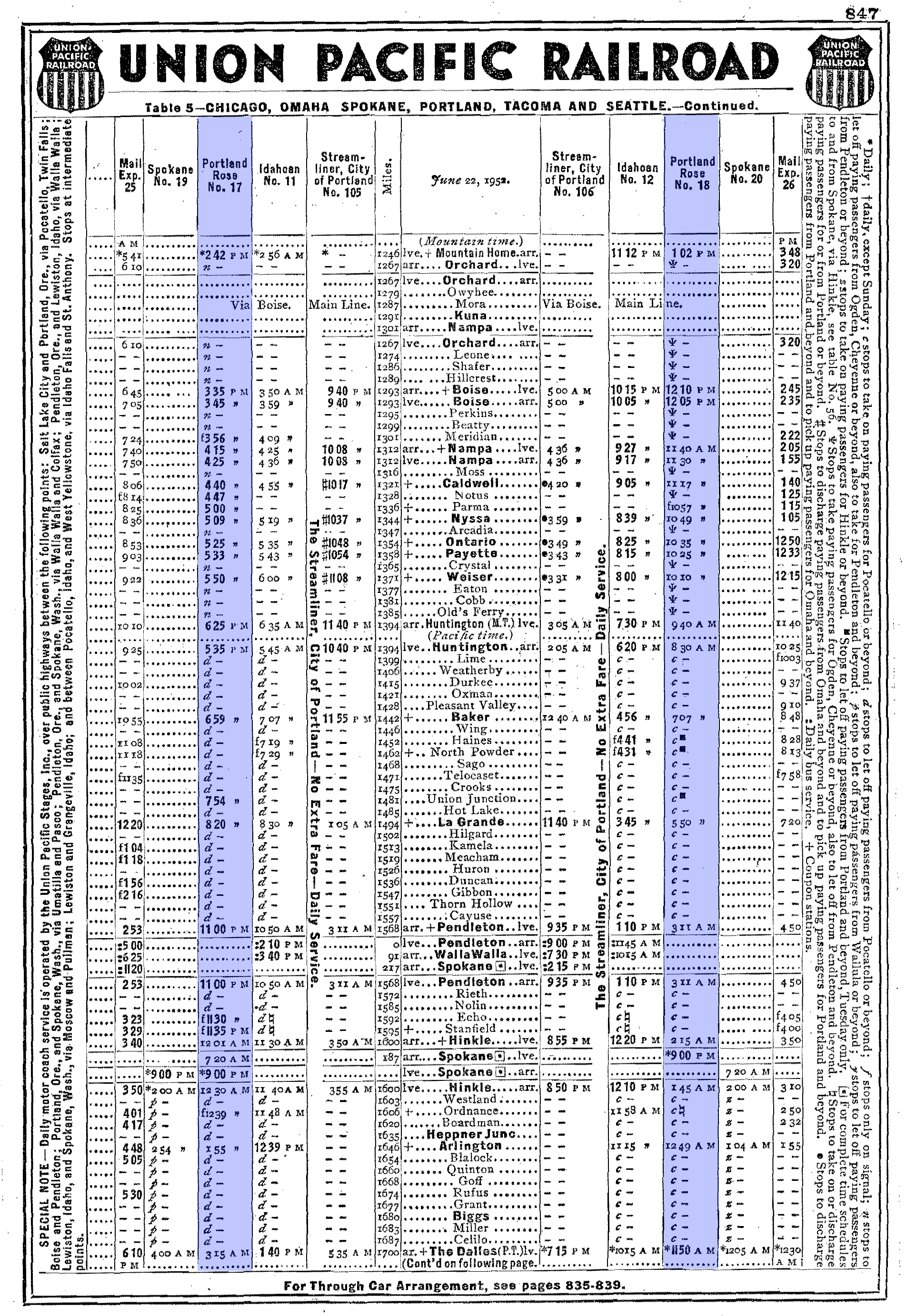 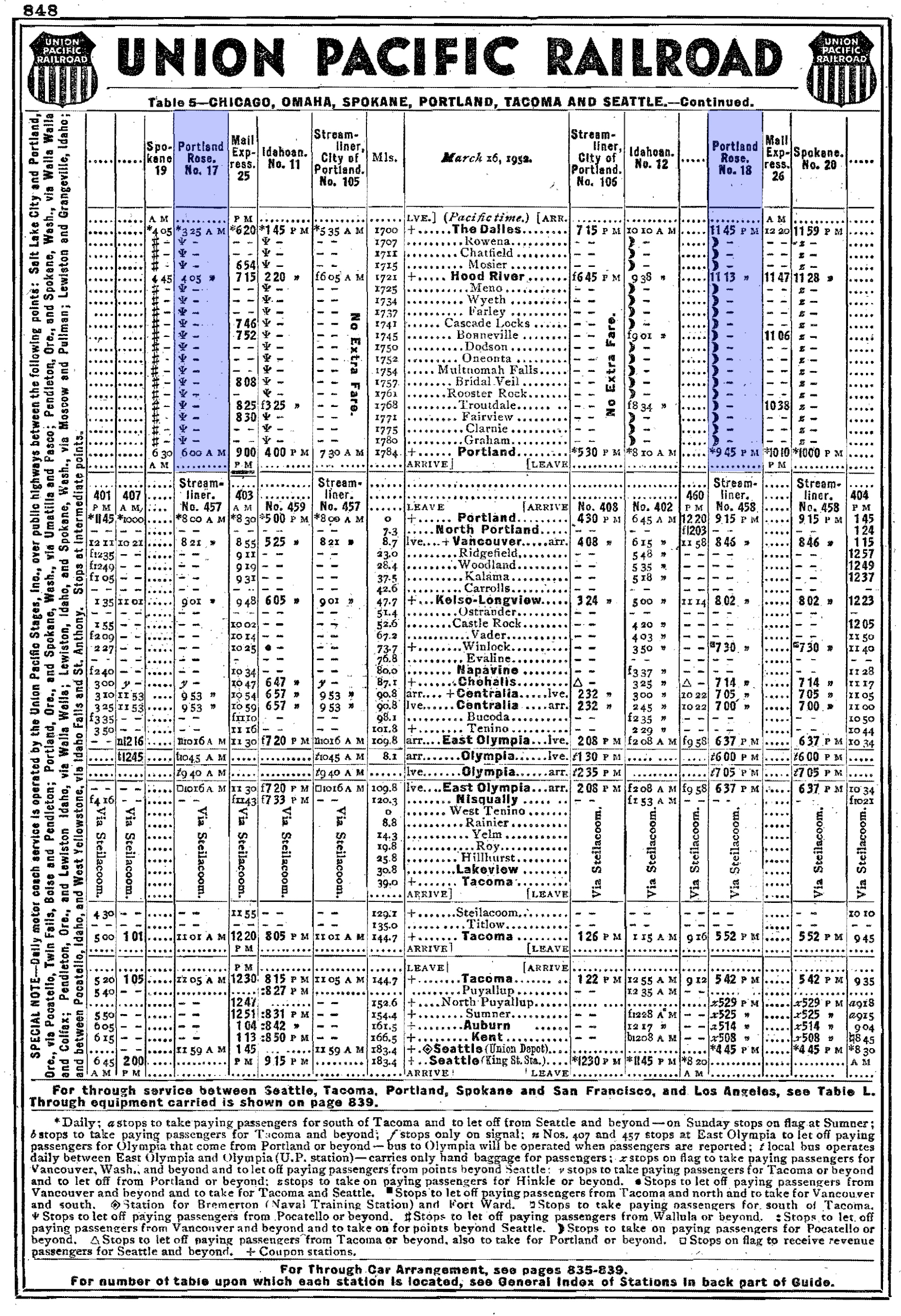 By 1947 UP had acquired enough streamlined equipment to shift its City of Portland to a daily schedule, which occurred on February 15th and caused the Portland Rose to lose its through cars to Chicago and Tacoma/Seattle.

Instead, it began picking up equipment from the Windy City at Green River, Wyoming via the Pacific Limited (another secondary train).  In 1954 as the railroad continued shuffling its passenger fleet the Rose was extended to Kansas City after the Pony Express was discontinued during January of that year.

The train also began running with some lightweight cars then, handed down from the City fleet which was predominantly reequipped during the early 1950s.  Even so, the Rose continued to field its share of modernized, heavyweights.

However, shortly thereafter patronage began a long, indefinite decline that would not recover.  In response the railroad began combining trains and canceling others in order to curb mounting losses.

In spite of this Union Pacific kept service at its very best and its trains all-matching, the latter of which was a particular rarity by the 1960s on most other railroads.  The Rose, though, plodded along and remained under its original routing until the start of Amtrak during the spring of 1971.

Its final years witnessed the train merely a shadow of its former self carrying only reclining seat coaches and a café lounge between Pocatello (Idaho) and Portland.  Today, Union Pacific continues to honor this train as part of its business car fleet with 44-seat coach #5473 named the Portland Rose.