The Poughkeepsie Bridge is one of New England's most famous landmarks. However, despite the bridge's size and length it was not constructed by any of the major Class I railroads of the time.

For years after it was completed the bridge was operated by the Central New England Railway, which became part of the New Haven system after World War I. Never used by either of the large Class Is in the region the New York Central or Pennsylvania, the bridge became an important link for smaller, regional systems like the L&NE, L&HR, CNJ, and others.

After the New Haven joined Penn Central on January 1, 1969, the bridge became redundant and it was finally sold off by Conrail.  Unfortunately, there is a great deal of controversy surrounding the structure.

In 1974 Penn Central was on the cusp of collapse following its bankruptcy four years earlier.  The company was destitute and attempted to eliminate as many money losing operations (branch lines, secondary corridors, commuter responsibilities, etc.).  The Poughkeepsie Bridge was one such asset.

It mysteriously caught fire in the spring of that year, rendering the structure unusable unless a major overhaul was carried out.  The railroad was often blamed for the fire since it failed to maintain the bridge's fire monitoring system, which included barrels of water and an employee to watch for sparks from passing trains. 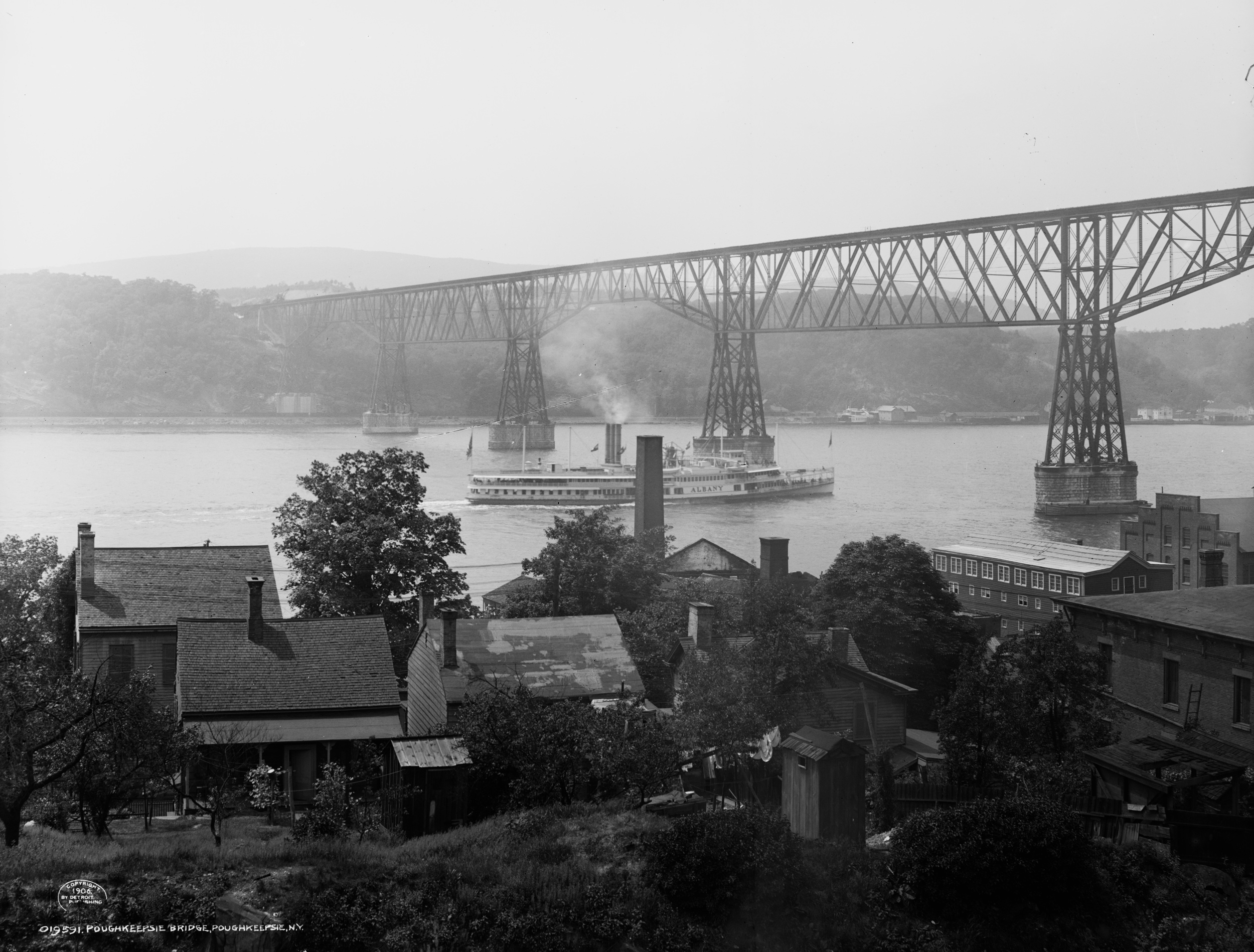 The Detroit Publishing Company took many high quality photographs during the 19th and early 20th centuries which are now greatly valued for their historical importance. Seen here is the Poughkeepsie Bridge looking to the northwest, circa 1906.

Today, the bridge is owned by the New York State Office of Parks, Recreation and Historic Preservation and was opened to the public in the fall of 2009 as the Walkway Over the Hudson State Historic Park. The idea for what would become the Poughkeepsie Bridge dates as far back as before the Civil War in 1855.

The plan was scoffed at for years but remained hopeful among those wishing to have a connection across the Hudson River south of Albany. The first true attempt to construct the bridge at the site was the Poughkeepsie Bridge Company chartered in June 1871 and was to be financed by the Pennsylvania Railroad.

However, the Panic of 1873 stalled the plan.  Fifteen years later, and with no major backing from a large railroad like the Pennsylvania the Manhattan Bridge Building Company was formed to finance the project in 1886. However, it was well-funded nonetheless with powerful names like Andrew Carnegie pitching in to see the bridge built.

With funding secured the bridge was completed in just two years, in late December, 1888, and opening on the first day of January, 1889. The bridge featured a cantilever design and was constructed entirely of steel save for its concrete supports.

Over one mile in length the structure was lauded as an engineering masterpiece and was quite a sight to behold from ground level.

Interestingly, the Poughkeepsie Bridge Company, which owned the bridge relied on new railroads to build east and west to link the bridge with the national network.

These companies began as the Hudson Connecting Railroad, chartered in 1887 to build southwestward from Poughkeepsie while the Poughkeepsie and Connecticut Railroad was chartered the same year to build northeastward. 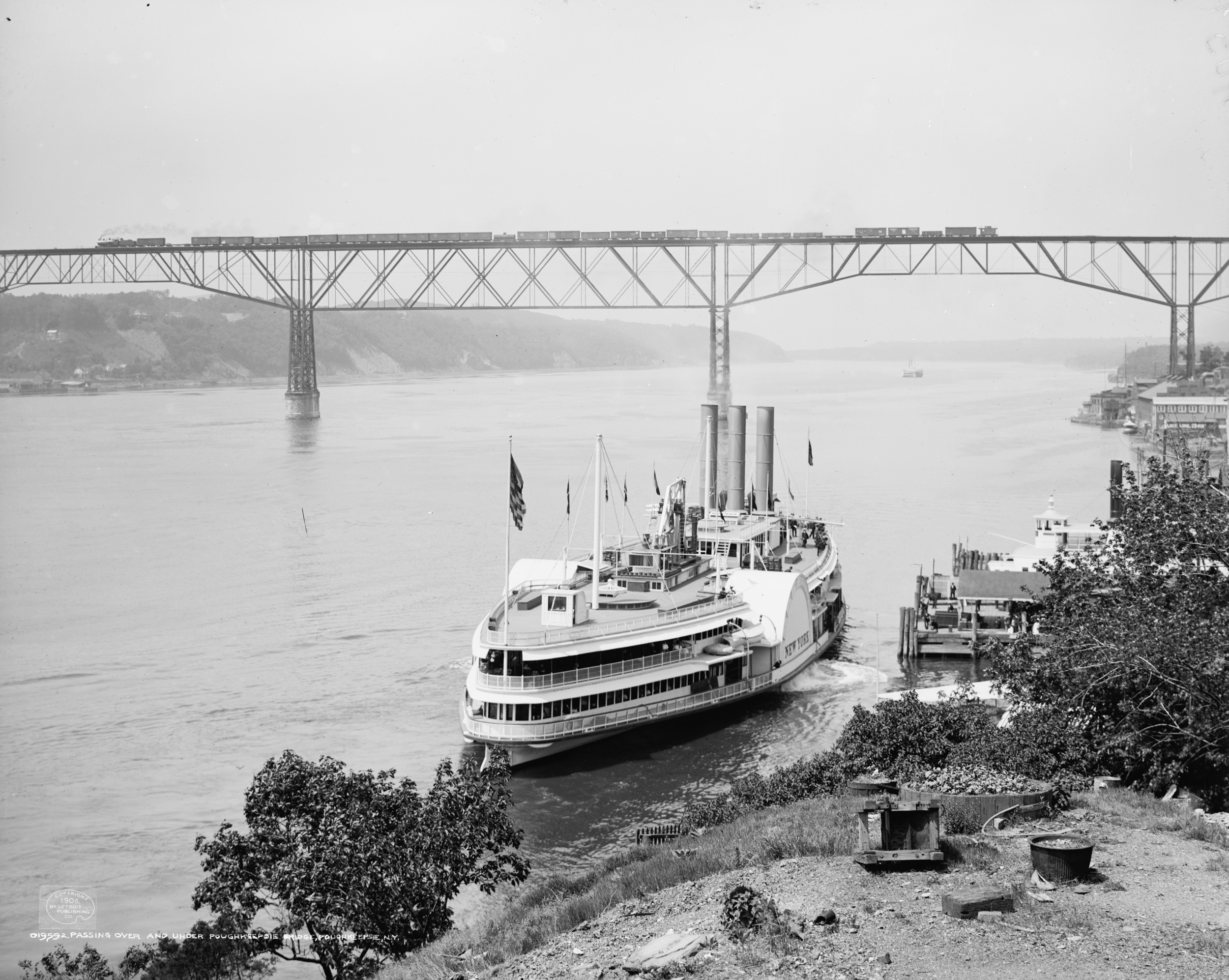 Looking directly north up the Hudson River we see a short, westbound freight train passing over the Poughkeepsie Bridge. To the right, along the river's east bank, but just out of view is the New York Central's "Water Level Route" main line.

In July of 1889, about seven months after the bridge opened the Central New England & Western Railroad was created to merge the three into a single, continuous route which stretched from Hartford, Connecticut to Maybrook, New York.

In 1892 the Philadelphia & Reading (the Reading) gained control of the CNE&W but lack of funding resulted in the railroad falling into bankruptcy and reorganized as the Central New England Railway.  The CNE remained in operation from 1899 until it came under the control of the New York, New Haven & Hartford Railroad in 1927, in which it remained until the creation of Penn Central. 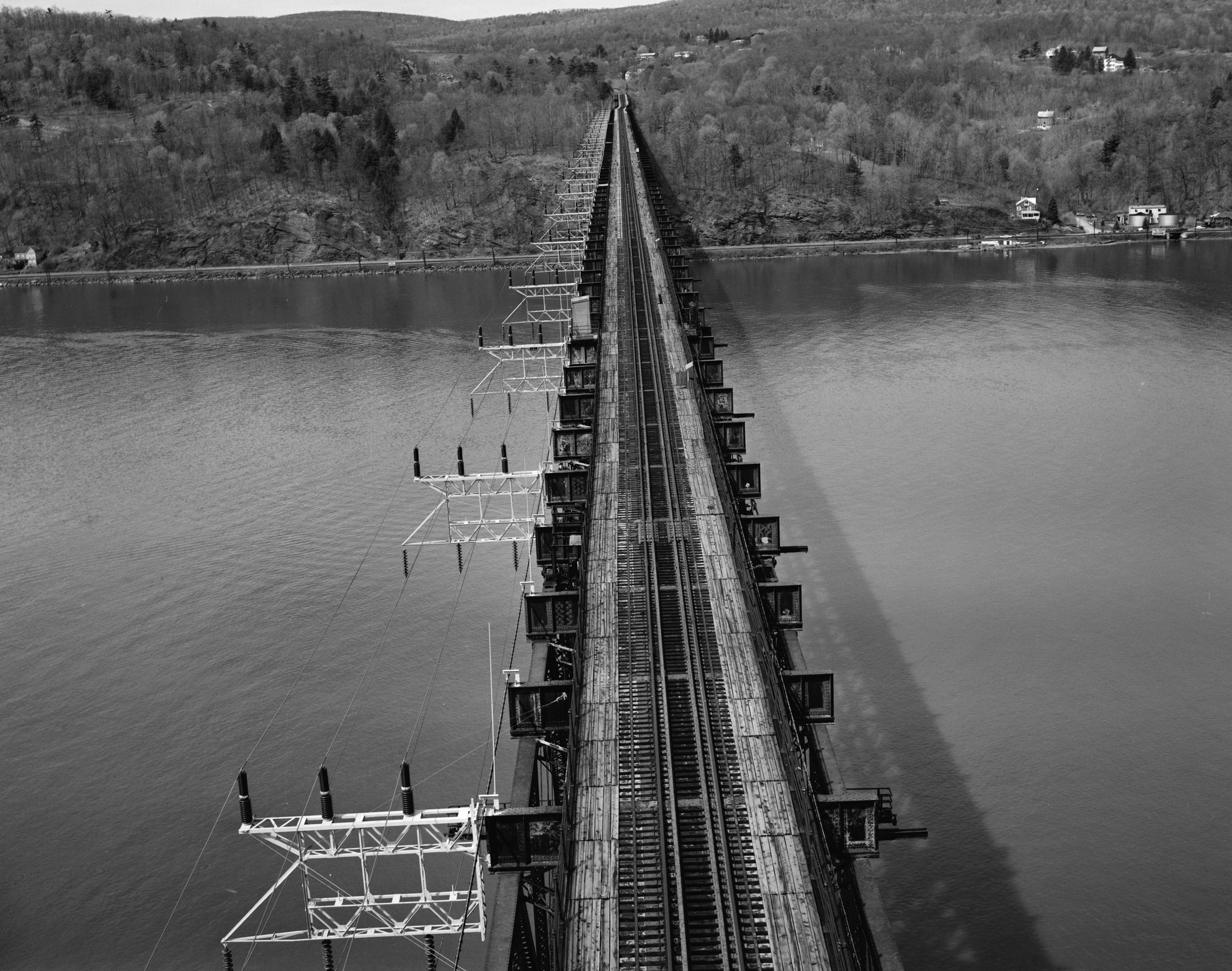 An undated, aerial view of the Poughkeepsie Bridge looking directly west. This scene appears to have been taken prior to the span's 1974 fire incident when rail service ceased.

Prior to the formation of the Erie-Lackawanna in 1960 virtually all of the smaller New England Class I's relied on the Poughkeepsie Bridge to ferry freight and passenger traffic between New England and points west and south such as Buffalo, Philadelphia, Chicago, etc.

These companies included the DL&W, Erie, L&NE, L&HR, Central Railroad of New Jersey (CNJ), and even to some extent the Reading (who often ferried traffic to and from the CNJ).  After the EL merger the new company, to some extent, elected to keep traffic on its own rails for Chicago-bound traffic.

However, the bridge still offered an important interchange point for New England-bound traffic carried by the Boston & Maine and New Haven.  When it closed in 1970s the EL felt the effects along with many of the other smaller roads previously mentioned. 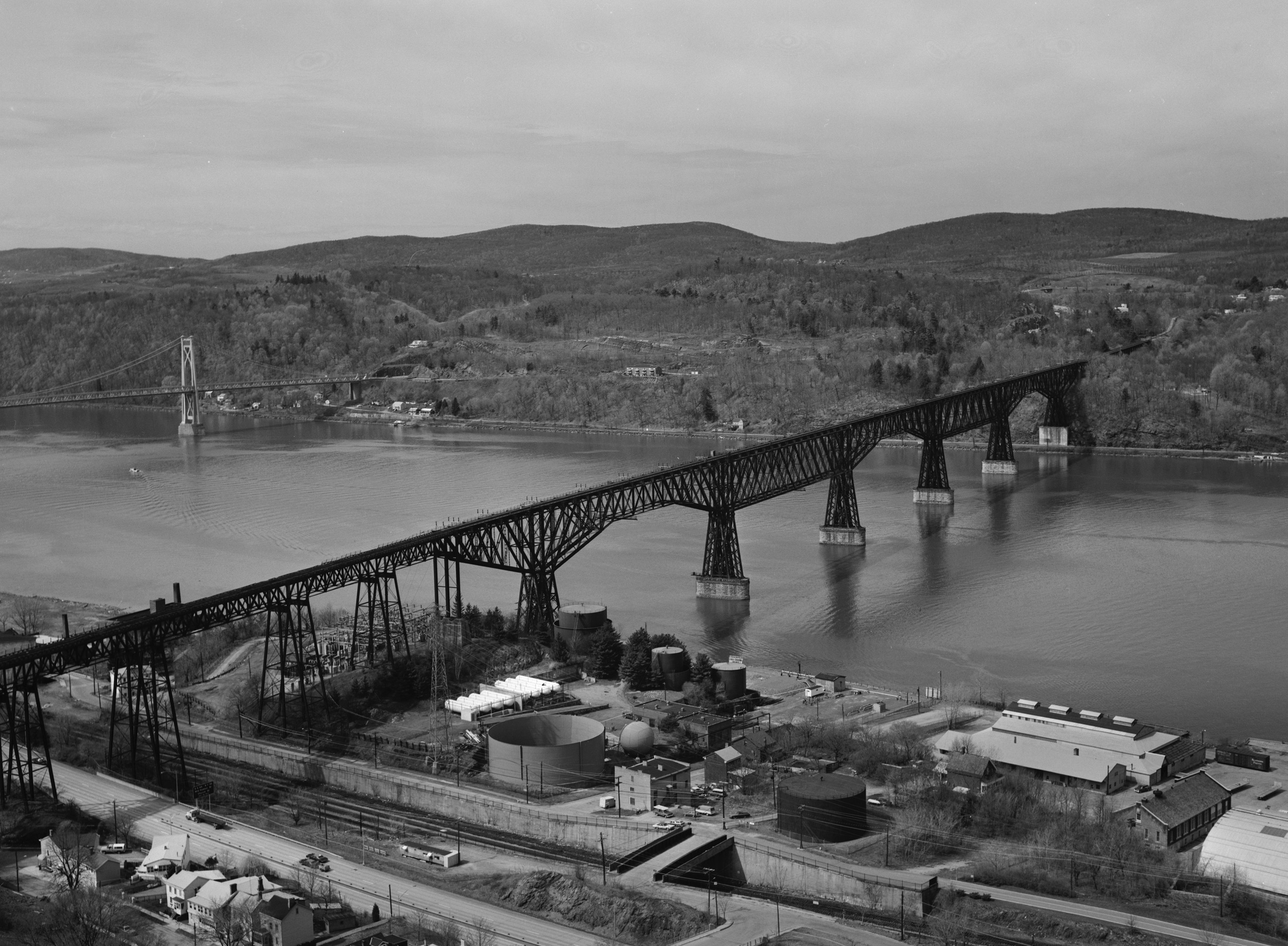 A southwestward aerial view of the Poughkeepsie Bridge, taken circa early 1970's.

The bridge saw less traffic after the creation of Penn Central in 1968 as that railroad chose to likewise keep freight on its own rails rather than transferring it to other lines.

To make matters worse the PC's declining financial situation and worsening operations (maintenance was in shambles and trains were being lost all over the railroad) caused the bridge to see even less traffic.  Then, an arsonist's fire on May 8, 1974 forced the bridge to close and the PC chose to fix the damaged structure.

This closure forced the bridge line, Lehigh & Hudson River into bankruptcy, as it was unable to fund the repairs to the bridge which was its only lifeline to freight traffic. 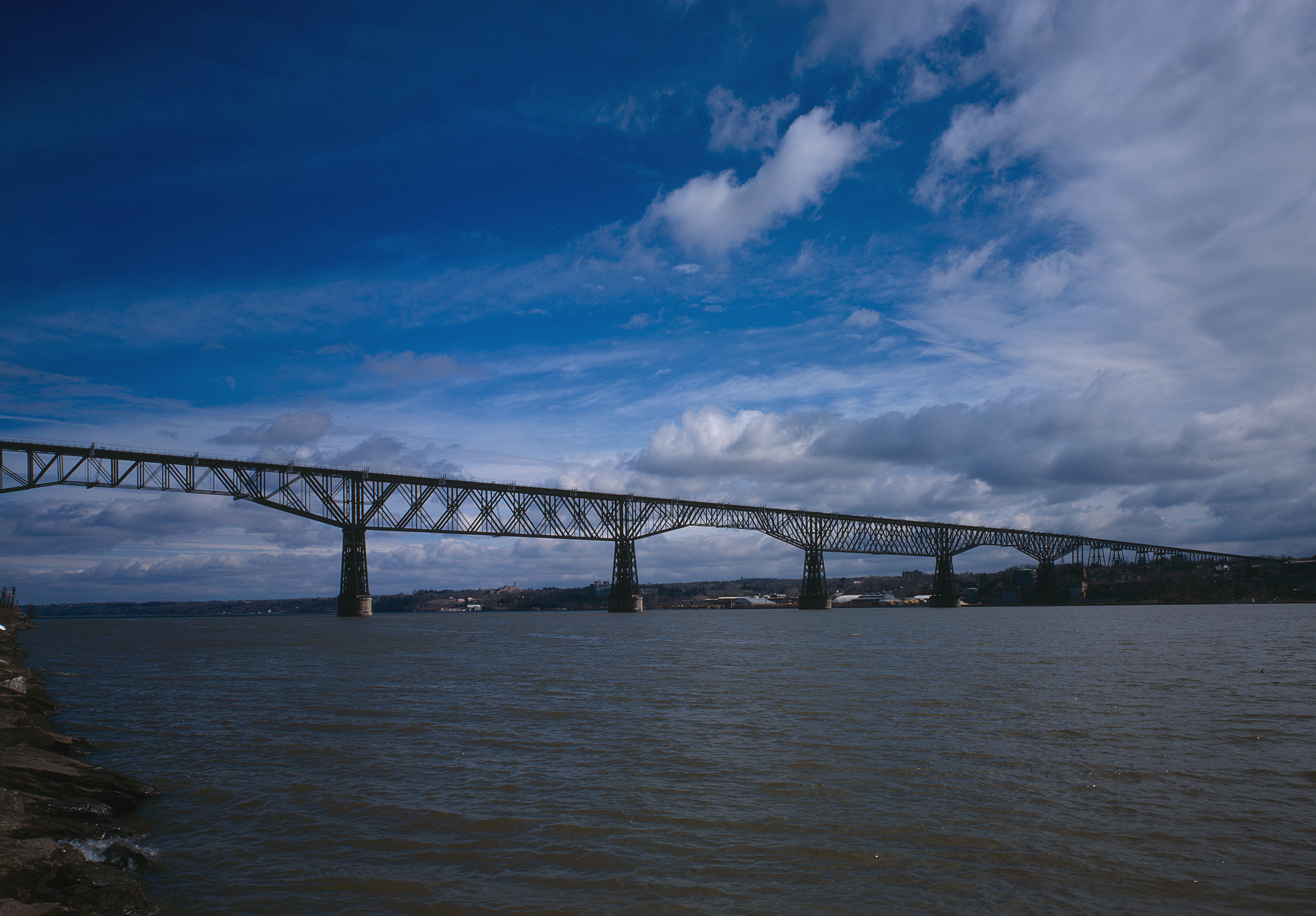 A northeasterly view of the Poughkeepsie Bridge, taken from the Hudson River's west bank, circa 1986. By the date of this photo the span had been out of service for twelve years. Jet Lowe photo.

Walkway Over The Hudson

The bridge passed into the hands of Conrail which continued to neglect it as now it served no significant railroad purpose with the government-owned company owning all of the former railroads' lines that had relied on it.

In late 1984 the bridge was sold to Gordon Schreiber Miller and later Vito Moreno, both of which did nothing with the bridge. Fourteen years later it was sold to the Walkway Over the Hudson non-profit group which looked to turn it a pedestrian footbridge.

After millions of dollars either granted, raised, or donated the bridge opened to the public on October 3, 2009.     To visit the Walkway's website please click here.