Despite its small size the Rahway Valley Railroad was a historic short line located in New Jersey that offered to connections to three major Class I lines in the region.

The system dated back to the late 19th century under a different name, which was only a few miles in length. Over the next 30 years or so the company's profit margin ebbed and flowed, and it was nearly abandoned at one point.

However, new management in the 1920s saved the short line and for the next several years it maintained a high level of efficiency and profitability (for a railroad of its size).

The downfall of Penn Central in the early 1970s and then the creation of Conrail caused a ripple effect that hurt the RV both financially and through a loss of interchange partners.

In the 1980s the Rahway was acquired by the Delaware Otsego Corporation, which slowly allowed the property to fall apart and it was abandoned in the early 1990s.

Currently, there are talks to revive the entire railroad and a small section has already reopened in the mid-2000s.

The history of the Rahway Valley Railroad begins with the formation of the New Orange Industrial Association (NOIA) in the mid-1890s, formed by Elmira, New York investors to establish business in the town of New Orange near Union Township, New Jersey along the Rahway River.

The idea for this project came from Charles W. Manahan who was attempting to promote business in several then-small towns outside of busy New York City so families could get away from the hectic lifestyle of the city yet still find a good job to support themselves.

In June of 1897 the NOIA group chartered the New York & New Orange Railroad to serve the new planned businesses.

Soon after it had opened a 4-mile line from New Orange (later renamed Kenilworth) to Aldene, where a connection was established with the Central Railroad of New Jersey (Jersey Central). Then, in 1899 it added a short connection with the Lehigh Valley at nearby Roselle Park.

The NY&NO hoped to reach Summit to the northwest put funding ran out. Then, in 1899 an economic recession forced the closure of several area businesses, which brought down the railroad.

It was sold and reorganized as the New Orange Four Junction Railroad in 1901 with the NOIA still having an interest in the property, then led by William Cole.

Soon afterwards the Pennsylvania Railroad became interested in the route as a freight feeder and helped grade and purchase the property from Kenilworth to Summit.

Unfortunately, the NOFJ also ran into money troubles and was unable to complete any additional construction.

With nothing transpiring Louis Keller entered the picture, who owned the local Baltusrol Golf Club near Summit and wanted to see better transportation provided to his resort; this led to the chartering of the Rahway Valley Railroad on July 18, 1904, which acquired the NOFJ on March 1, 1905. 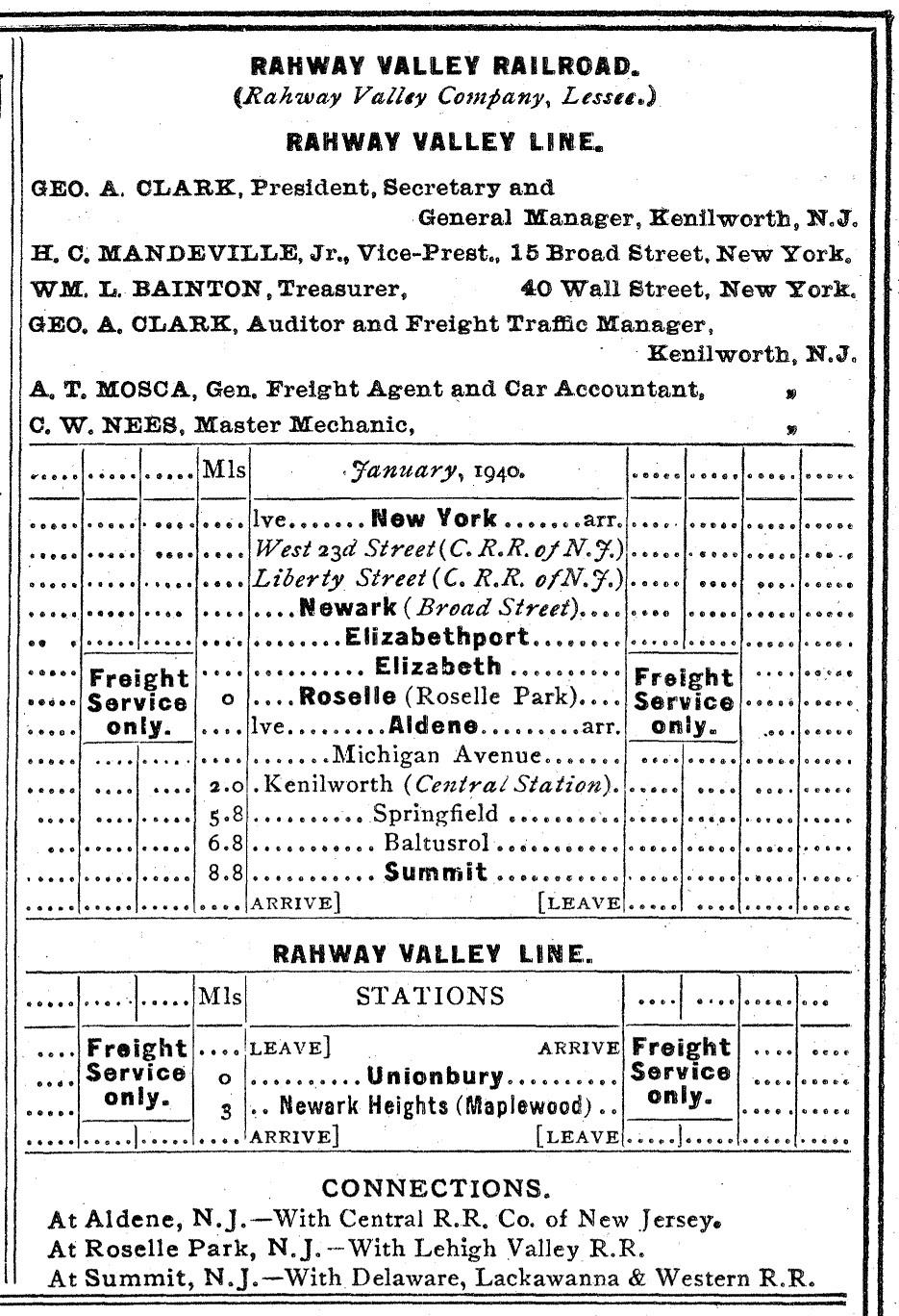 Between the work of Keller and Cole the Rahway Valley was able to reach Summit by 1906 but had difficulty in completing a connection with the Delaware, Lackawanna & Western there (which finally occurred in 1931 after a lengthy court fight).

Under their leadership the little short line was marginally successful although struggled to remain profitable.

In 1909 the Rahway Valley Company was formed as a paper corporation to lease the railroad and attempt to reduce costs.

With onset of World War I the road was finally able to see healthy profits as several industries were constructed to help with the European war effort (which the U.S. would enter in the spring of 1917).

This also resulted in the construction of the Rahway Valley Line, a subsidiary railroad formed in 1915 to build a 2.9 branch from Branch Junction to Newark Heights.

With Keller's declining health he appointed Roger A. Clark and his son George to head the Rahway Valley Railroad in 1919; when he passed away two years later in 1921 the estate appointed Roger as president.

It turned out to be a wise choice as both father and son became quite skilled in managing the railroad, maintaining a high level of efficiency, and attracting new businesses.

It was not by chance, however, as Roger Clark already had a long career in the railroad industry working for the Buffalo, Rochester & Pittsburgh and later the Central Railroad of Oregon.

While Roger was president of the RV he oversaw the upgrading of better locomotives:

During the 1920s the Rahway Valley plodded along moving a variety of freight (from lumber and coal to steel and various less-than-carload shipments).

The railroad gave up on remaining passenger services in the early 1920s, which from the beginning had never been in high demand.

In 1932 dad, Roger, passed away and the Keller estate placed gave his son, George, as president. The railroad had weathered the Great Depression until then relatively well, all things considered, and oddly during one of the slowest economic periods in American history it showed a net profit in 1934.

From there, prosperity continued for the RV as the new president worked hard to build relationships with businesses and grow traffic. Even though during the 1950s it lost out on most LCL shipments to growing truck competition the company continued to hum along.

In January 1951 dieselization came to the Rahway Valley in the way of a General Electric 70-tonner #16 with another added three years later in 1954 (#17).

In some ways, the railroad was another victim of the Penn Central collapse. While the major Northeastern lines were in a fragile state by the 1960s the receivership of the Penn Central in 1970 caused a chain reaction of bankruptcies that included all of the RV's interchange partners.

This resulted in the creation of Conrail in 1976 and the short line no longer had multiple connections but only one.

Additionally, the RV's customer base was shrinking and little maintenance had been done on the property for years. George Clark passed away in 1969, and his son took over, Robert.

In 1986 the Rahway Valley Railroad was acquired by the Delaware Otsego Corporation, which was neither customer friendly nor maintenance preventive.

As customers left and with a right-of-way in very poor condition abandonment resulted in April of 1992.

Interestingly, efforts were made in 2001 by the state of New Jersey to rebuild the entire RV line as a freight and passenger route.

A small southerly section was opened in 2005 and operated by short line Morristown & Erie Railway. While funding is not currently available to reopen the rest of the main line, the property is clear of brush and most obstacles to Summit.

(Thanks to John Cunningham's "New Jersey's Streak O' Rust" from the October, 1950 issue of Trains as a reference for this article.)