Railfans: What Are Train Enthusiasts?

You may have heard the term "railfans" or "train enthusiasts" and wondered what either meant.  For many, the idea of having an interest in railroads seems rather absurd, even more-so by the notion of photographing them.

In reality, such a pastime not only exists but has also thrived for many decades.  Today, it is a multi-million dollar industry with a multitude of niches, ranging from photography and collecting to modeling and writing.

For most, simply standing track-side watching trains pass by is enough for them.  There have been major trade publications, tailored specifically to railfans, in circulation since the early 1940's when Trains Magazine, a subsidiary of Kalmbach Publishing, released its first issue.

Due to the so-called "mega merger" movement, which began in earnest during the 1970's, railfanning has lost some of its appeal; today, only a handful of large "Class I" carriers (defined as the largest, in terms of annual revenue) still exist.

During the industry's "Golden Age" more than 100 such railroads could be found throughout the country, each with their own, unique corporate culture.  As a result, interest in these now-"fallen flags" remains at an all-time high. 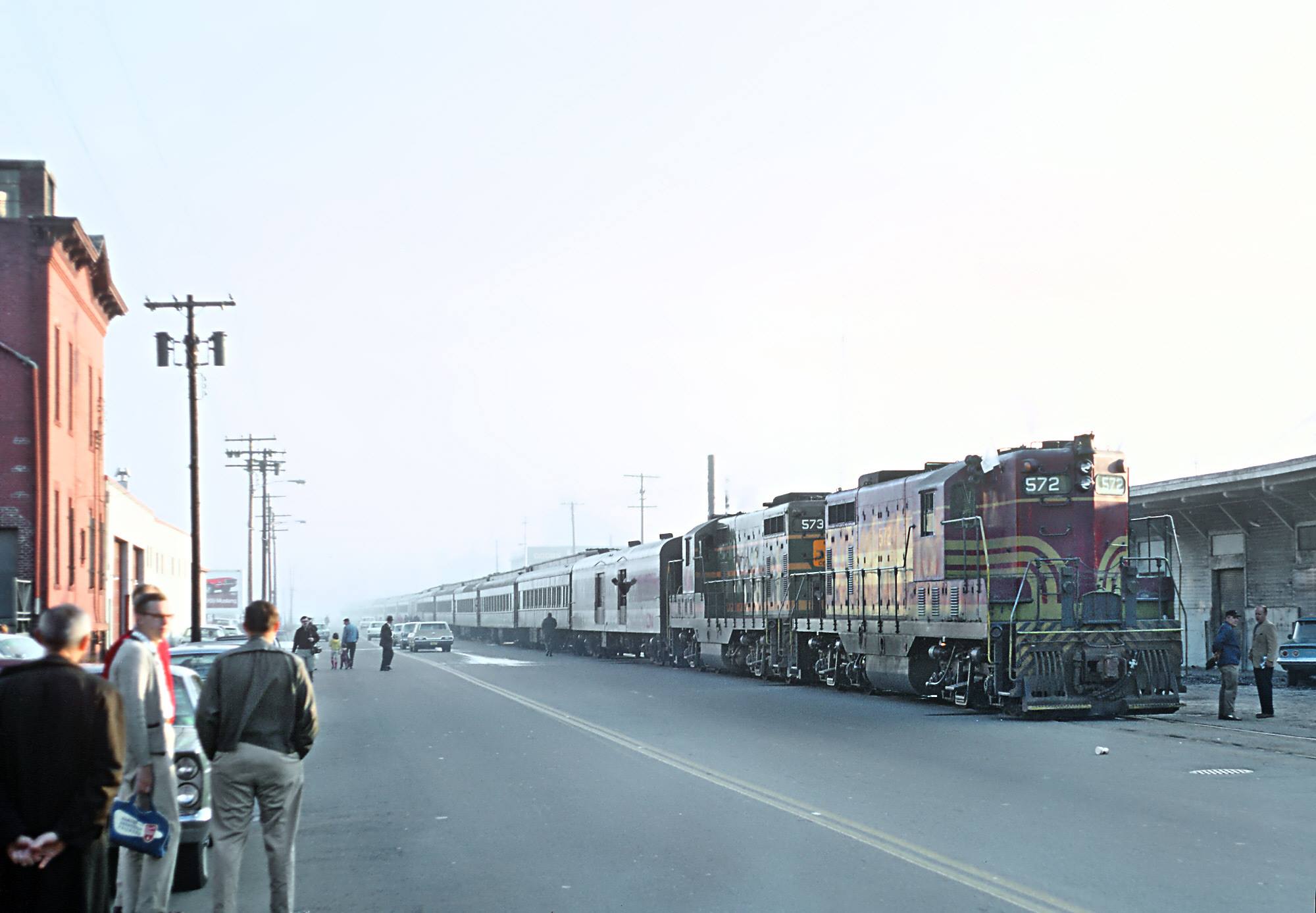 Neither the term "railfan," nor the train enthusiast hobby, is a new concept.  The oldest organization geared towards such is the Railway & Locomotive Historical Society, Inc. founded in 1921.  Its purpose now, as then, is to preserve rail history.

Specifically, the group notes they are "...devoted to railroad history, and among the first anywhere to pursue formal studies in the history of technology.

The Society promotes research and encourages preservation of documentation and photography of business history, finance, labor history, and biography as well as technology."

In 1934 the first, official "fan trip," or train excursion was hosted by a railroad.  Today, these events are not nearly as common due to rising insurance costs, fear of lawsuits, and (to some extent) unsafe practices by railfans.

In his article from the September, 1969 issue of Trains Magazine entitled "Are These People Embalmers Or Enthusiasts?," noted editor David P. Morgan described the term "railfan" quite poignantly.

It carries a range of sub-interests, from photography to modeling, but generally refers to those who enjoy the academia of trains in some form or fashion.

The next important organization was the National Railway Historical Society, formed in 1935.

The Definition Of "Railfanning"

Railfanning is not an all-encompassing term as the hobby has numerous niches and subcategories.  However, the subject, of course, does specifically focus on trains. For many, railfanning is defined by photography as mentioned elsewhere in this article.

During the 1990's, Trains Magazines would occasionally present a piece entitled "Hot Spots," which highlighted extremely busy locations throughout the United States where one could watch dozens of train at a single location on a daily basis.

Before the modern Internet age, "Hot Spots" was a very handy tool for finding your next photography location!

In any event, railfanning, as a recreation, covers a wide range of subjects, from modeling and photography to memorabilia and meet-and-greets.

Simply put, there is no "wrong" way to enjoy it; if your interest is in trains than you can rightfully be called a railfan or train enthusiast.

Mr. Morgan's article rings as true today as it did all those decades ago.  Although some railroaders are railfans themselves, many view it as just a job with no emotional attachment to the industry in any way, shape or form.

As such, these folks are distrustful, and sometimes even hostile, to train enthusiasts who watch or photograph trains near the tracks.  Railroad executives often hold the same view but are usually more pragmatic about it all.

For instance, in 2011 Norfolk Southern Railway (NS), one of the country's major Class I carriers, launched what it called the "21st Century Steam Program," in which the company hosted excursions pulled by restored steam locomotives (although not owned by NS).

It was largely the vision of then President/CEO Charles "Wick" Moorman, a long-time railfan himself.  However, with his departure in 2013, these events were canceled and the final runs made in 2015.

Most Class I's carry a similar attitude and are very strict about hosting any type of excursions/fan trips.  In the case of Union Pacific, it only operates steam locomotives which were part of its original fleet, now maintained within its own heritage program based at its historic roundhouse in Cheyenne, Wyoming. 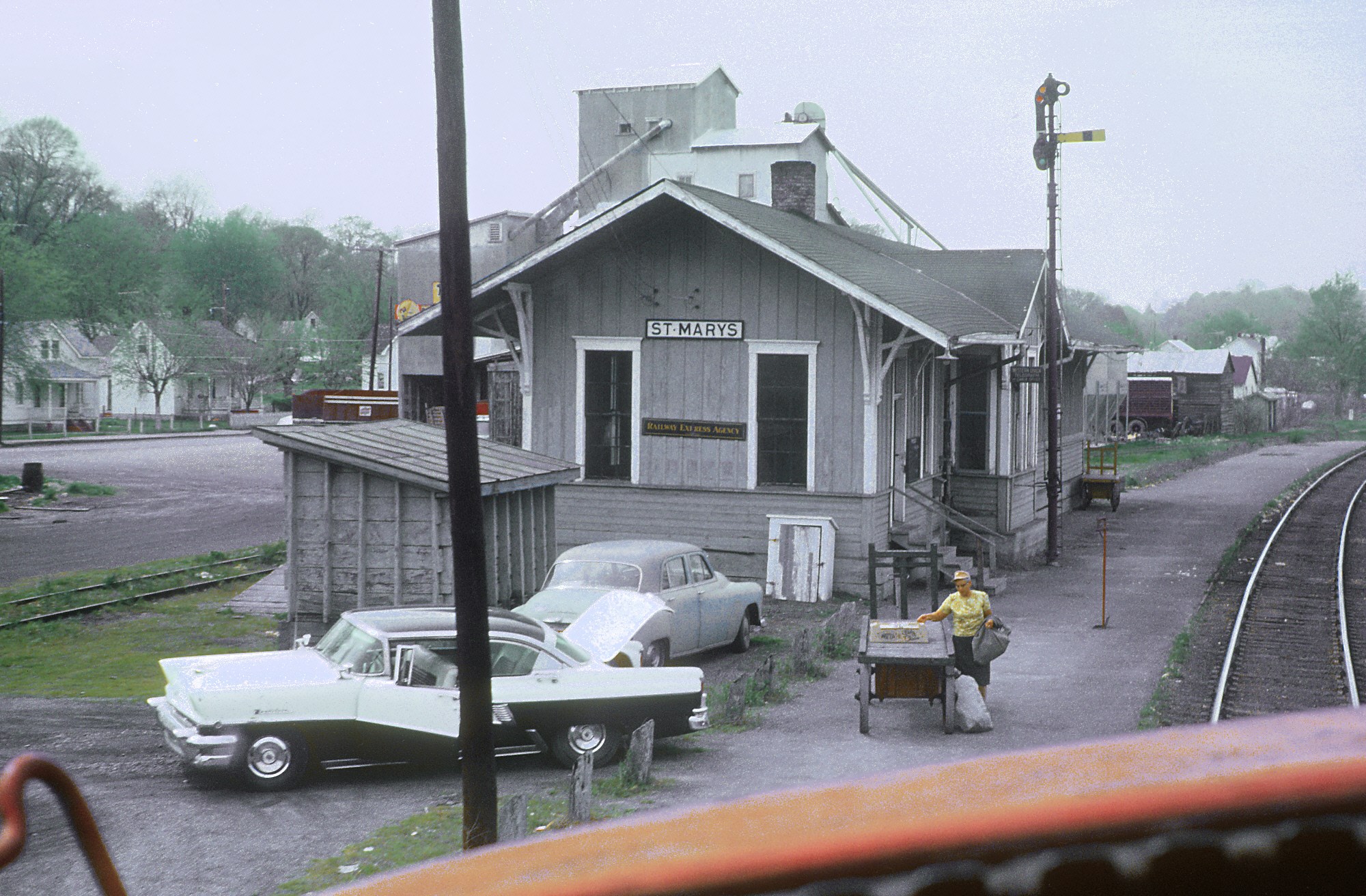 In previous generations, railfans had the opportunity to take cab rides, something no longer available today. Here, Roger Puta is in the cab of St. Louis-San Francisco's (Frisco) train #808, the northbound "Sunnyland" (Memphis - St. Louis), as it prepares to stop at St. Marys, Missouri on April 16, 1963.

Further within Mr. Morgan's article he articulates the railfan term himself:

"We submit that a railfan is anyone with a concern and/or enthusiasm for railroading beyond the claim of monetary gain (e.g., pay-check, stock dividend, bond interest).

That description stretches the old stereotype of the fan as Rollei-laden zealot in a rail-insignia-embroidered jacket explaining why N&W's (Norfolk & Western) dieselization was not in the public interest or how the narrow gauge could make money.

Conversely, that description, if understood, will disabuse the p.r. man's dream of 100,000 unpaid, instant lobbyists who, at the drop of an AAR (Association of American Railroads) press release, will march upon Washington demanding continuation of the 7 per cent investment tax credit, intermodal ownership, no CZ (California Zephyr), three-man yard crews, or whatever else it may be felt that the industry deems it is in need of at any given moment."

In essence, railfans have not changed considerably since Mr. Morgan's column.  The entire article is fascinating as it would still be relevant in the modern era; he goes on to describe how some folks' love of railroads have led them to careers in the industry.

There have been many publications covering the railroad industry dating back to its earliest days, such as the American Railroad Journal (launched in 1832 as the "Rail-Road Journal" and Railway Age (originally printed in 1856 as the Western Railroad Gazette, then renamed as the Railroad Gazette in 1870).

Only since Kalmbach Publishing released Trains Magazine in 1940 has there been a publication tailored specifically towards railfans.  Other titles under the Kalmbach name include Classic Trains, Model Railroader, Garden Railways, and Classic Toy Trains.

In addition, the company has released several specials over the years (such as the Tourist Trains Guidebook, Build A Small Model Railroad, All-Star Electric Trains, and Modeling The Transition Era) or, in the digital age, released various DVD's and other videos.

They also have a number of stand-alone books to their credit.  Its first, of course, was Trains, which launched in 1940, prior to World War II.

The initial release was a "Special Preview Edition," as the company referred to it, at a cost of just $0.25!

That first issue covered a number of different subjects, such as a topic on "Pacific Type" steam locomotives and Virginia's Potomac Yard (since closed).

It also contained a piece entitled "Railfan Ingenuity" by George Krambles, which spoke about the subject of unique excursions, specifically those offered by electrified interurbans, an industry that has long since vanished itself.

The first actual issue of Trains was released in November, 1940 and contained some of the same material as featured in the special.

There were several noteworthy names to grace this cover including A.C. Kalmbach (founder) and Lucius Beebe (a long revered photographer of railroading's classic era).

Future legendary names to appear in its pages include J. David Ingles, David P. Morgan, Otto Perry, Philp R. Hastings, Wallace W. Abbey, Jim Shaughnessy, and many others.  For all of Trains' accolades, it has not been the only magazine in print.

Many historical societies also publish their own quarterly or annual magazine covering whichever specific subject they are tasked with preserving.

Today, the average train enthusiast does not enjoy the close connection with railroads as he or she did years ago.  Prior to the 1980's, one could freely mingle around a yard, interlocking tower, engine shop, etc. without repercussion as long as written permission was obtained beforehand.

Such a thought would be unimaginable in modern times.  Another common treat was cab rides provided by train crews; sometimes these lasted several hours, or on rare occasion, all day!

Finally, in an era when railroads cared a great deal about their public image, management was quite generous with inquiries for photos, pamphlets, timetables, etc.  If kids wrote letters requesting such, they were usually rewarded with a great packet of material!

Railfanning in the 21st century does not enjoy such perks and suspicion is now rampant, so much so that photographers are sometimes even removed from public property.

Things have certainly changed tremendously during the last 40+ years and not necessarily for the better.  When one thinks of "railfanning" today it usually relates to photography, by far the hobby's most popular niche.

Even here interest varies; some try to catch rare, historic diesels still in service while others only "shoot" steam. 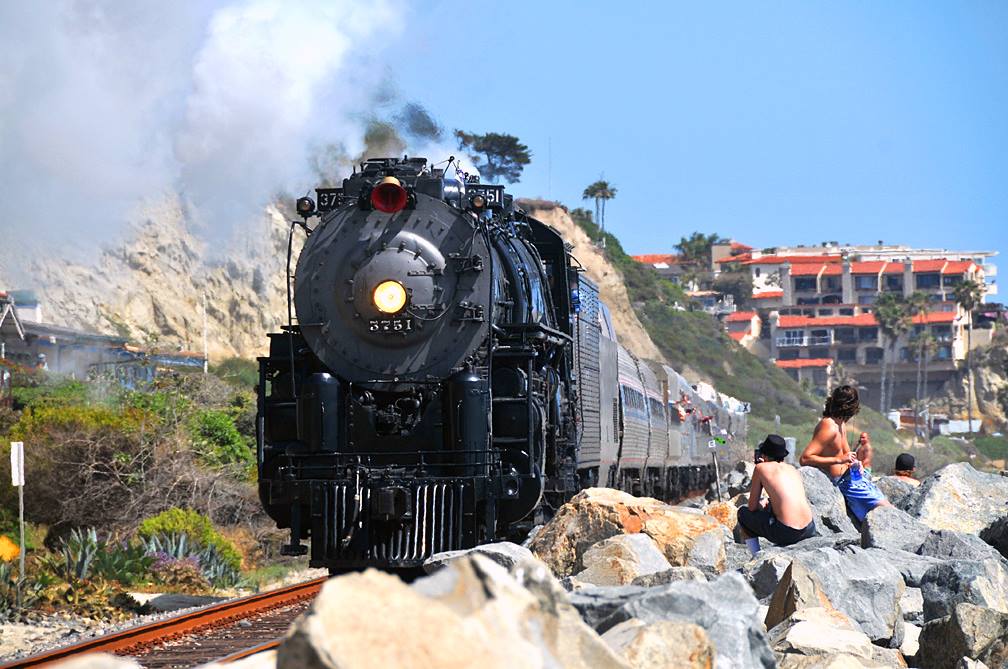 From another angle, there are those who spend great effort documenting a railroad's locomotive fleet while others use their skills to land images in magazines and/or books.

There is even an entire website dedicated to nothing but rail photography, RailPictures.net, which aims, in its estimation, to present "The best railroad photos on the net."

Since that website's inception there have certainly been many fabulous scenes presented in digital format.

Unfortunately, some folks take the railfanning subject too seriously, resulting in others losing interest or harming the hobby as a whole.

Unsafe practices, or trespassing, have forced some railroads to employ strict policies of conduct near their property (or, if permission is granted, while on their property).  In some instances, outsiders are banned altogether!

This has led to derogatory names like "foamers" (metaphorically "foaming at the mouth" by just the sight of a train) and has actually extended beyond railroads; poor, rude, or illegal behavior of trespassing on private property has resulted in similar actions taken by land owners adjacent to the tracks.

If you are a railfan, or interested in the hobby, please be respectful, courteous, and safe at all times around trains!  It can be a fun, relaxing, and enjoyable family hobby available to all.