The Southern Railway is often remembered as a road with relatively flat and tangent main lines due to the region in which it operated.

However, it did operate its share of steep, circuitous main lines such as Saluda Grade in western North Carolina and its famed "Rathole Division" through Kentucky and Tennessee that reached as far north as Cincinnati.

Technically, this stretch of the Southern main line was known as the 2nd District of subsidiary Cincinnati, New Orleans & Texas Pacific (CNO&TP), which was plagued for years by numerous tunnels resulting in its famous nickname by the crews which operated over it.

Over the years the Southern worked to daylight or bypass these obstacles as the route saw significant freight tonnage, a task finally completed during the 1960s.

While one may no longer see colorful "Tuxedo" locomotives sporting the "Southern" name, the Rathole remains an important artery under Norfolk Southern's vast network today. 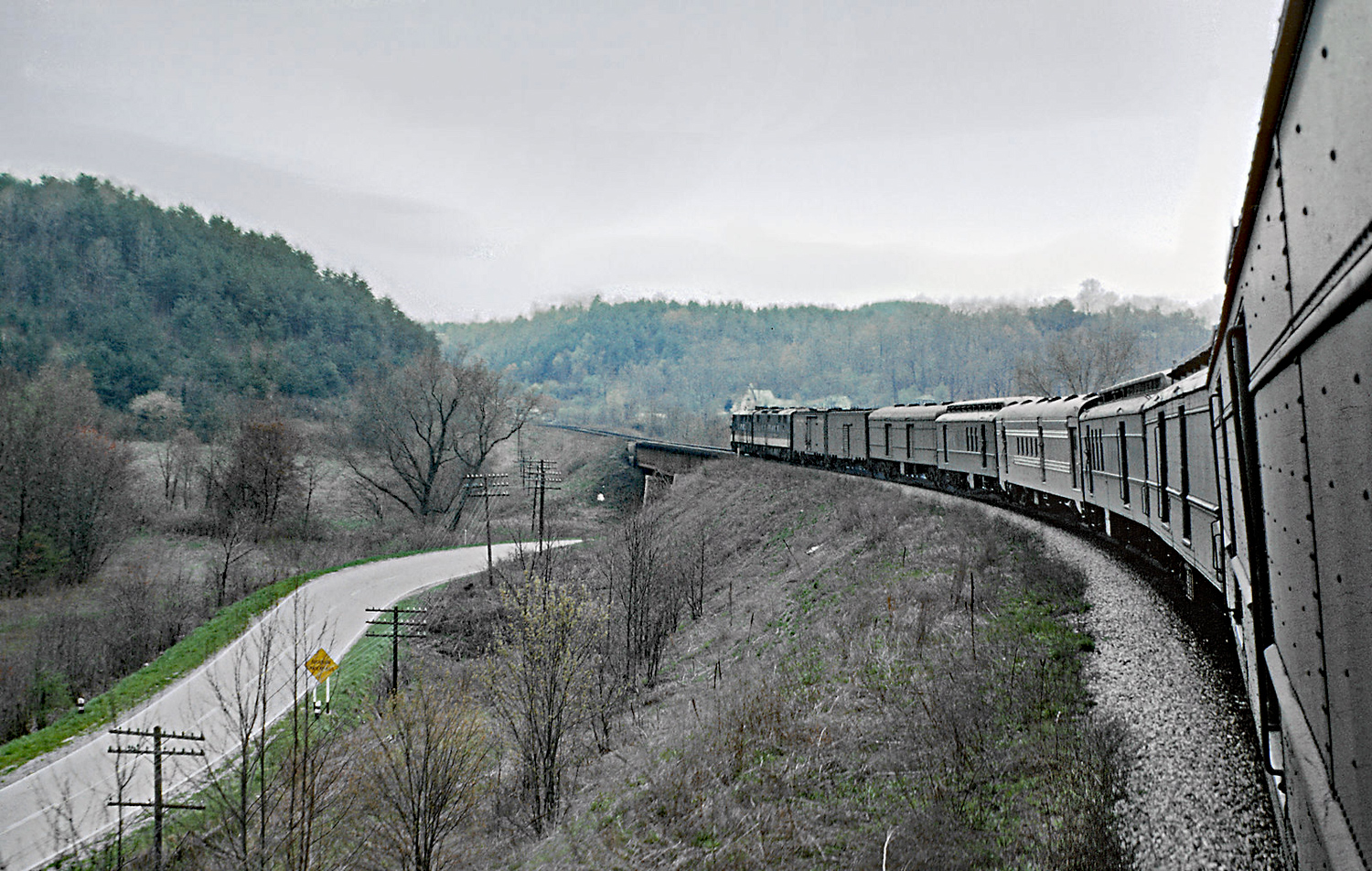 In a scene that appears to have been taken from a baggage car of Southern Railway's train #3, the "Royal Palm," it traverses the Cincinnati, New Orleans & Texas Pacific, otherwise known as the Rathole Division, at rural Sunbright, Tennessee on April 11, 1963. Roger Puta photo.

While the "Rathole Division" became an interesting and fascinating operation to railfans over the years, for the railroad which operated it the line was a frustrating bottleneck and headache until all tunnels had either been daylighted, re-bored, or bypassed.

The history of the line officially began on May 4, 1869 when the City of Cincinnati passed the Ferguson Act, which created the Cincinnati Southern Railway that would connect the Queen City with Chattanooga, Tennessee (the city worried that it would be at a competitive disadvantage if it did not have its own railroad linked to the rest of the southern states).

After all necessary charters were acquired the CS began construction on December 23, 1873.  The railroad was built to a five-foot gauge and required six years to complete the 338 miles between Gest Street Yard in Cincinnati to Terminal Station (the Chattanooga Choo Choo). 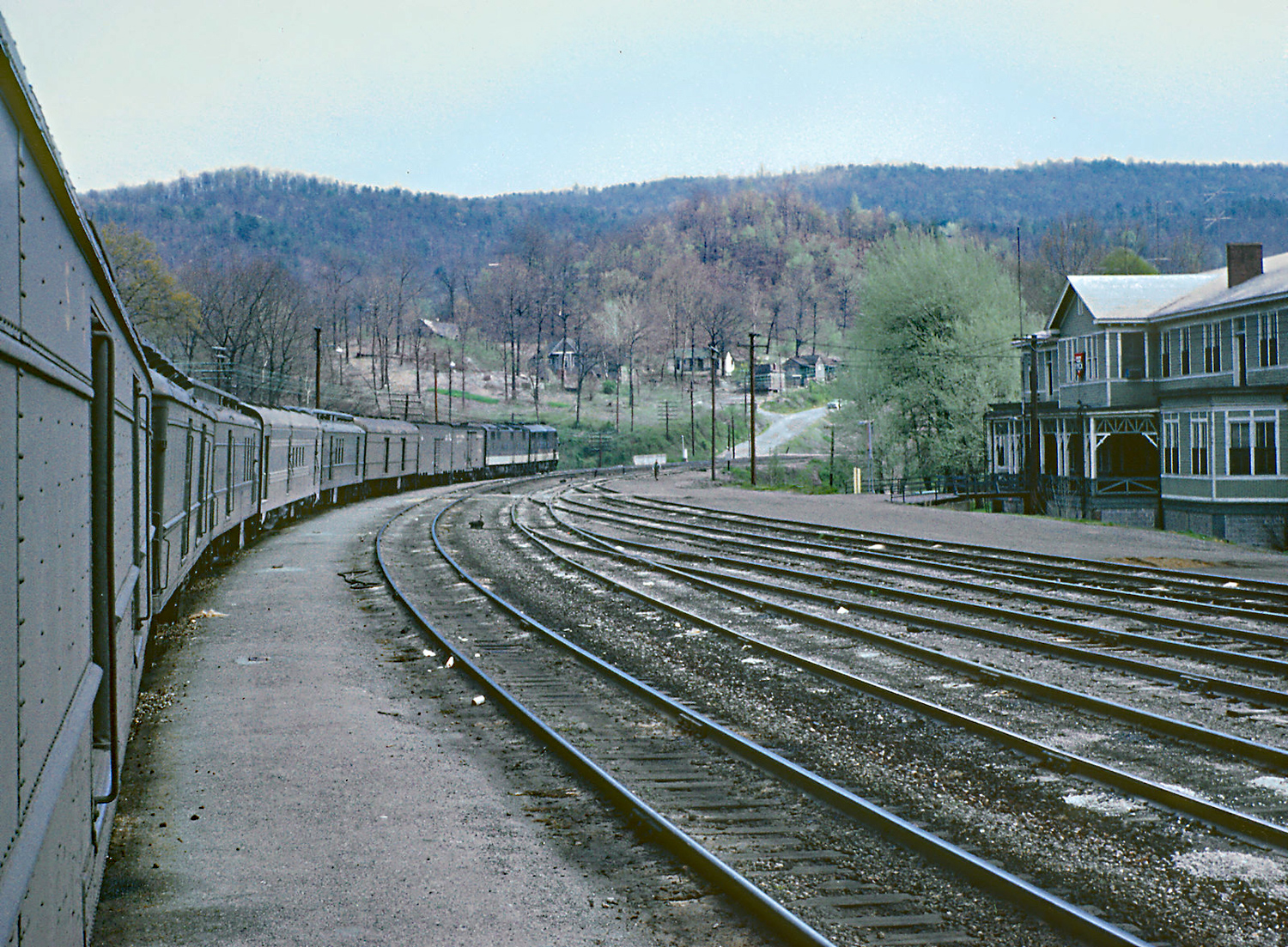 The same train as seen above is stopped at Oakdale, Tennessee. This location was the Rathole Division's southern terminus, noted by the small yard and bunkhouse at right. Roger Puta photo.

The line reached Chattanooga on December 10, 1879 and officially opened to passenger traffic on February 21, 1880 with freight trains beginning operations a few weeks later on March 8th.

While the corridor snaked its way through the western edge of the Appalachian Mountain chain and made for incredibly scenic views it required building 105 bridges and 27 tunnels (totaling five miles in length).

So many bores led to crews quickly dubbing the route as the "Rat Hole" between Danville, Kentucky and Oakdale, Tennessee (where 23 of the tunnels were located) which was later named the "Rathole Division" after Southern ownership.

Additionally, the city quickly realized that by constructing the railroad to five-foot gauge made interchange and operations slow and inefficient as the many railroads, and the industry in general, was switching to the standard gauge of 4 feet, 8 1/2 inches.  Incredibly, track workers were able to re-gauge the entire line in just 13 hours on May 30, 1886.

The formation of the Cincinnati, New Orleans & Texas Pacific Railway was actually nothing more than a corporate ploy by CS trustees to line their pockets with more profits and their plan fell through before any significant earnings could be achieve.

The CNO&STP was created on September 7, 1881 to lease the entire CS system.  While successful in doing so the new paper company soon fell into bankruptcy and was later formally acquired by the growing Southern Railway.

Following this takeover the City of Cincinnati had citizens vote on a bond measure to sell the CS to the Southern, which was rejected on August 3, 1896.

As a result, to this day Norfolk Southern continues to lease the CNO&STP from the city with the railroad making lease payments on the property and in return keeps all derived revenue and maintains the line as necessary.  Of course, this has proven quite lucrative for both the Southern and NS as the line continues to see significant levels of traffic.

From an operational standpoint as early as the late 19th century the Southern was seeing a steady increase in traffic along the division.  With a growing bottleneck on its hands the railroad began bypassing and daylighting some of the tunnels in 1901.

The issue went beyond this, however, as the Southern was also limited to the size of the locomotives able to operate the line due to asphyxiation and heat problems.  In most cases, only the smallest 2-8-2 Mikados in freight service and 4-6-2 Pacifics for passenger trains could be used.

Not surprisingly, when brand new Electro-Motive FT diesels began arriving between 1939 and 1941 one of the first regions in which they were assigned was the "Rat Hole."  For more reading about the Rathole please click here. 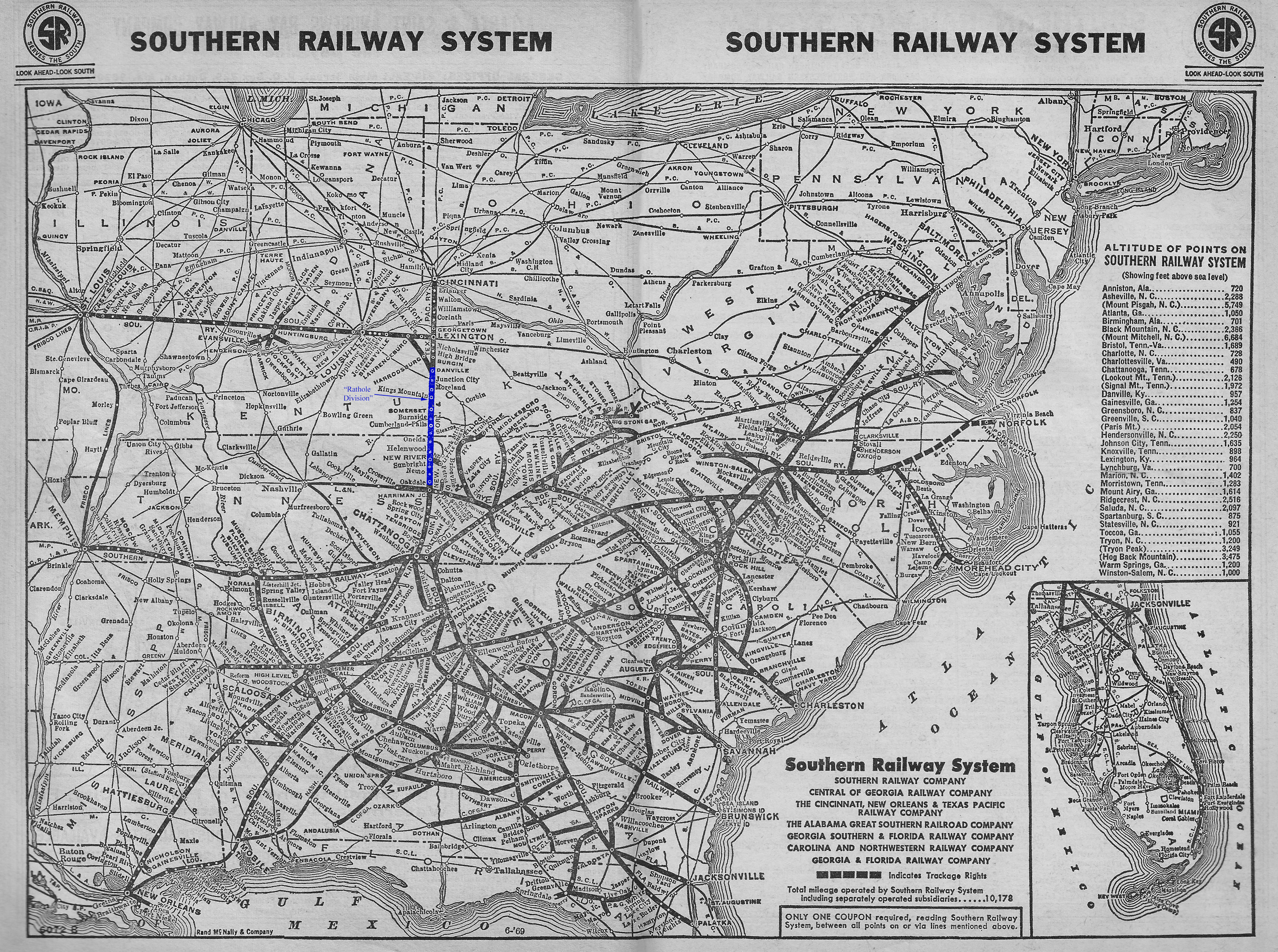 A map of the "Rathole Division" (highlighted in blue) from Southern Railway's 1969 system map. Author's collection.

Other early diesels to run the line included Fairbanks-Morse Train Masters, newer F models, and SD24s.  Over the years the tunnels continued to be daylighted to the point that only 13 remained by 1950, which was spurred by the Southern's hope to move larger and heavier freights over the line.

By the 1960s intermodal, automobiles, and piggyback/TOFC (Trailer-On-Flatcar) freight was growing in volume and to meet this demand the railroad and Cincinnati elected to update the remainder of the route in 1961.  The project took 18 months, cost $32 million and saw 25 miles of new rail line laid with nine tunnels bypassed, three new bores drilled, and one other enlarged.

Other updates to the corridor included several new, deep fills and a majestic 1,618-foot bridge spanning the New River that was 307 feet and five inches above the water at its highest point.

The new "Rathole Division" opened for freight traffic officially at 12:05 a.m. on July 10, 1963.   Interestingly, even following all the improvements the deep cuts and remaining tunnels still gave the route an appearance worthy of the "Rat Hole" title.

Today, the 2nd District, which the Southern referred to as a "high, wide, and handsome railroad" after it was daylighted, continues to move significant tonnage under successor Norfolk Southern.

(Thanks to "Into The Clear" piece by David P. Morgan from the January, 1964 issue of Trains and "As The Rabbit Chases The Beagle Up The Rathole" by Mike Iczkowski from the April, 1976 issue of Trains as primary references for this article.)