One of the classic main line mountain grades is the Santa Fe's classic Raton Pass.   Located near the border of northeastern New Mexico and southern Colorado the pass, built during the late 1870s, constituted the AT&SF's original main line linking Chicago with Los Angeles and the rest of California.

To acquire the pass required a fight with the Denver & Rio Grande, one of many duels between the two lines during that time.  The exploits of this war is detailed in Keith Bryant, Jr.'s excellent book, "History Of The Atchison, Topeka & Santa Fe Railway."

During the early 20th century the AT&SF completed the Belen Cutoff to the south which bypassed the mountains and cut across the northern plains of Texas.

The result of this work allowed for easier grades, faster transit times, and more efficient operations.  Nevertheless, Raton remained an important corridor for years despite being listed as the steepest main line in the west.

Today, the pass sees less freight traffic from its peak years but it is currently still operated by successor BNSF Railway. 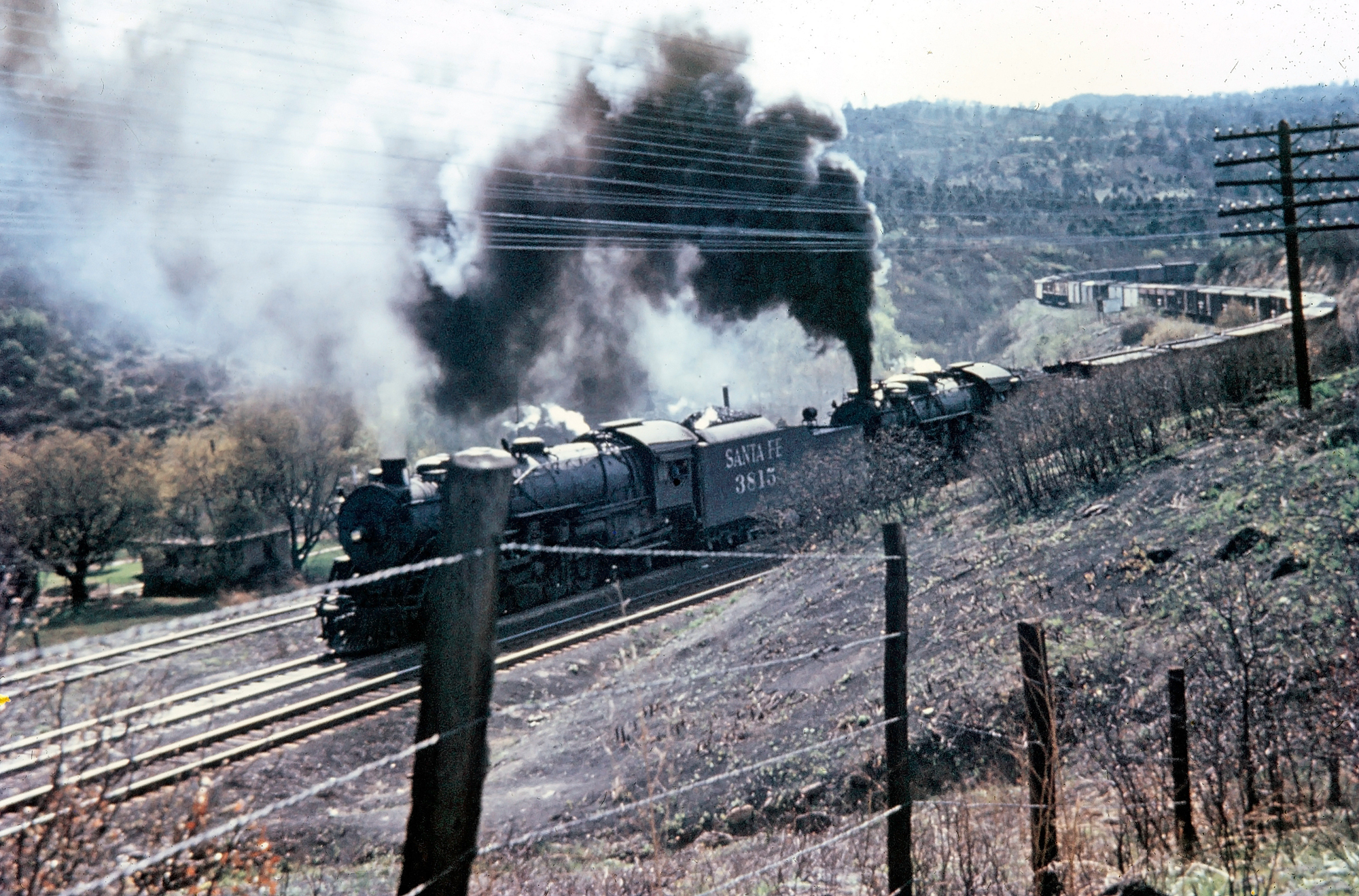 During May of 1869 the Transcontinental Railroad was completed opening the west to trade and development.  Following the completion of this line new railroads began spreading throughout the region, which included the Santa Fe and Denver & Rio Grande Railway.

The AT&SF had been building west from Topeka, Kansas since 1860 and the D&RG was chartered a decade later in 1870 hoping to connect Denver with El Paso, Texas and eventually Mexico.

In 1876 the Santa Fe had reached Pueblo, Colorado along with the D&RG and the fight to cross Raton ensued.  At the time the pass was owned by Richens "Uncle Dick" Wootton, who lived in the region since the 1850s, literally during the American Frontier era when Indians still controlled much of the region.

Despite having to defend himself at times from natives, Confederate loyalists, and Mother Nature herself, Wootton actually became a fairly successful businessman when he opened a hotel, tavern, and tollgate along the Santa Fe Trail near Fishers Peak which drew many patrons.

At the time the two railroads were vying for the pass, the D&RG was controlled by General William Palmer, who unfortunately did not help his cause by offending Wootton's neighbors in an attempt to reach the pass first.

After the Santa Fe caught wind of Rio Grande's intentions company engineer Albert Robinson and Location Engineer Ray Morley, using a D&RG train no less, went to El Moro near Trinidad, Colorado where they would scout their own route and hopefully gain permission through Wootton to have first rights to build a rail line. 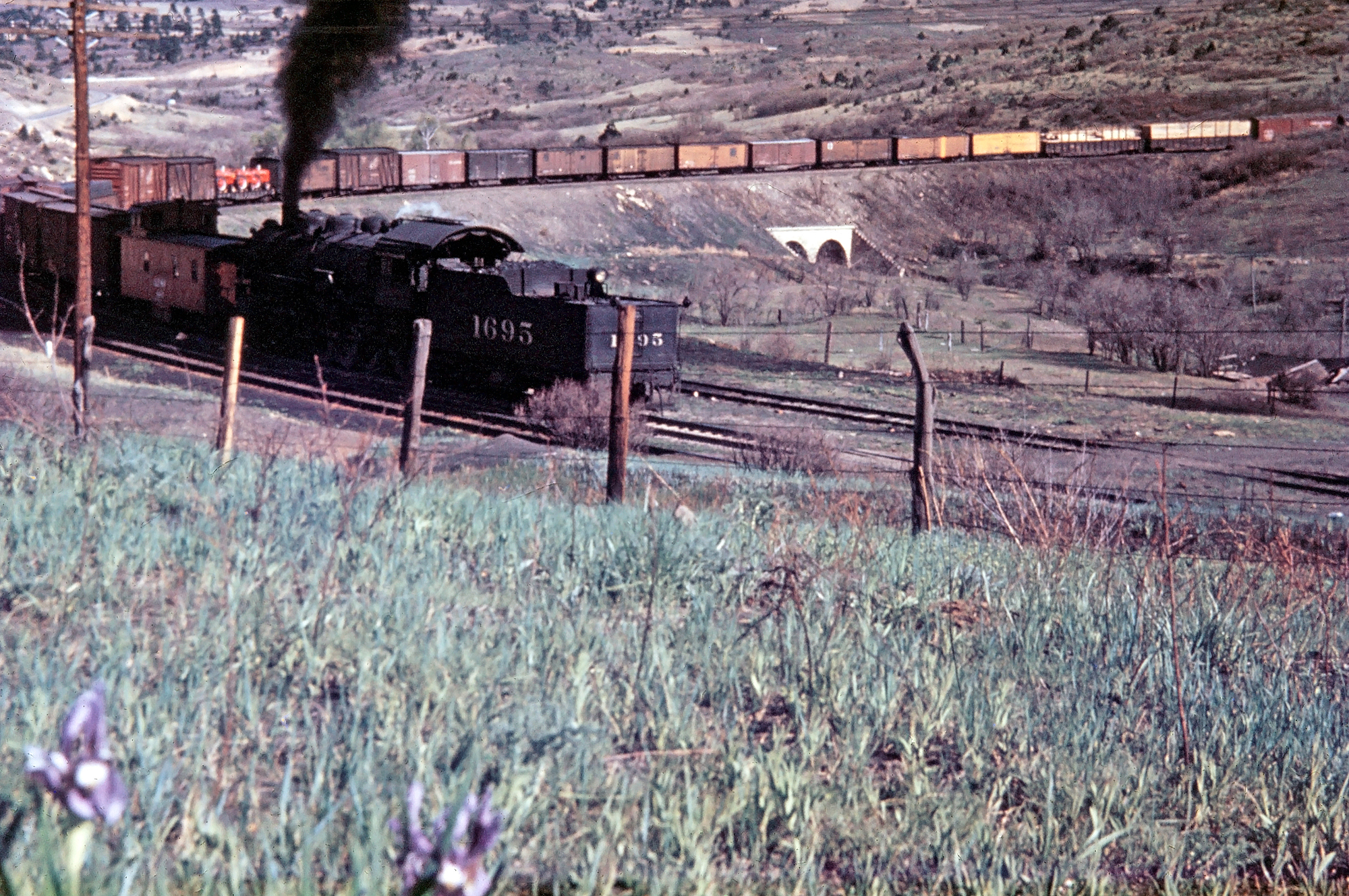 Santa Fe 2-10-2 #1695 (a 1912 product of Baldwin) works helper service over Raton Pass as the big engine shoves on the rear of a long manifest freight, circa 1954. Ed Olsen photo. American-Rails.com collection.

Robinson also sent engineer Lewis Kingman on horseback heading north from Cimmaron, New Mexico.  As it turns out Rio Grande personnel were also in the area but unaware that rival crews were also there and ultimately were beaten to the punch; AT&SF crews found Wootton first and were able to negotiate a deal for the railroad to build over Raton Pass.

Ultimately, the D&RG gave up on its intentions to continue building south and instead constructed a line to the west over Tennessee Pass through Colorado's Royal Gorge.

While the Santa Fe may have gained the rights to Raton it was still a difficult proposition in actually building a railroad over the pass.  The railroad originally completed a line over the mountain in 1878, a temporary and torturous route that featured switchbacks, 6% grades, and curves as sharp as 16 degrees.

A year later crews were finally able to finish the 2,041-foot tunnel but the AT&SF was still forced to deal with grades that reached as high as 3.5% at the top of the pass, 7,588 feet above sea level, and even higher in Colorado where they peaked at 4%.

After the pass was crossed the Santa Fe continued eastward through New Mexico and eventually reached Arizona and much of California.   Later, the railroad double-tracked much of the pass and constructed a second, 2,787-foot bore through the mountain that was graded to 0.158% (much easier than the original's 1.9% grade).

For all of the improvements, Raton was always an operational headache for the Santa Fe, as was any main line that featured grades above 3%.

In 1907 the AT&SF opened the Belen Cutoff, a 200+ mile main line that cut across the open plains of eastern New Mexico and the Northern Panhandle of Texas.

This new route diverted most of the railroad's transcontinental traffic off of Raton (this line is now part of BNSF's main line referred to as the Transcon).  However, the original line continued to see several trains per day including the crack Super Chief and El Capitan as well as several coal trains from nearby mines.

During the steam era one could regularly witness double-headed 2-8-8-2s and 2-10-2s tackling the grades either moving freights or assisting passenger consists.

As the years have passed train movements have ebbed and flowed over Raton Pass.  Today, it has lost much of the local coal movements that once moved steadily out of the region.  Additionally, much of the priority traffic has been picked up over Belen and the Transcon route.

Still, Raton refuses to give up the ghost and today acts primarily as a relief valve occasionally seeing hot-shot movements such as "Z"-symbolled intermodals or United Parcel Service (UPS) pre-blocked movements.

There is also Amtrak's Southwest Chief which continues to use the line.  Most other trains passing over Raton are strings of empty coal hoppers or "bare-table" well cars (intermodal).

It is interesting to wonder what the future holds for the country's steepest main line still in operation although it appears that for now we will continue to see the latest locomotives tackle Santa Fe's original transcontinental route to the west coast.