The Gulf, Mobile & Ohio, famously known as The Rebel Route, gained its celebrated slogan from the small fleet of passenger trains known as Rebels originally launched by a predecessor road. The GM&O is not well remembered for its passenger services.

This is likely due to the fact that it bailed out of the Deep South passenger market in the 1950s due to stiff competition from the Illinois Central and Louisville & Nashville despite the fact that the railroad was one of the earliest to begin experimenting with the streamliner concept in the mid-1930s.

Regardless, its small fleet of streamliners made enough of an impression that they are still remembered today by many in the railroading ranks and those who were lucky enough to ride aboard them.

Similar to the Chessie System in the east, the Gulf Mobile & Ohio serving the Midwest and South was a short-lived railroad whose legend continues to live on today.

The GM&O wasn’t created until the early days of diesel power and it was gone by the early 1970s. However, during its roughly 40 years of operation the company held its own against the competition. 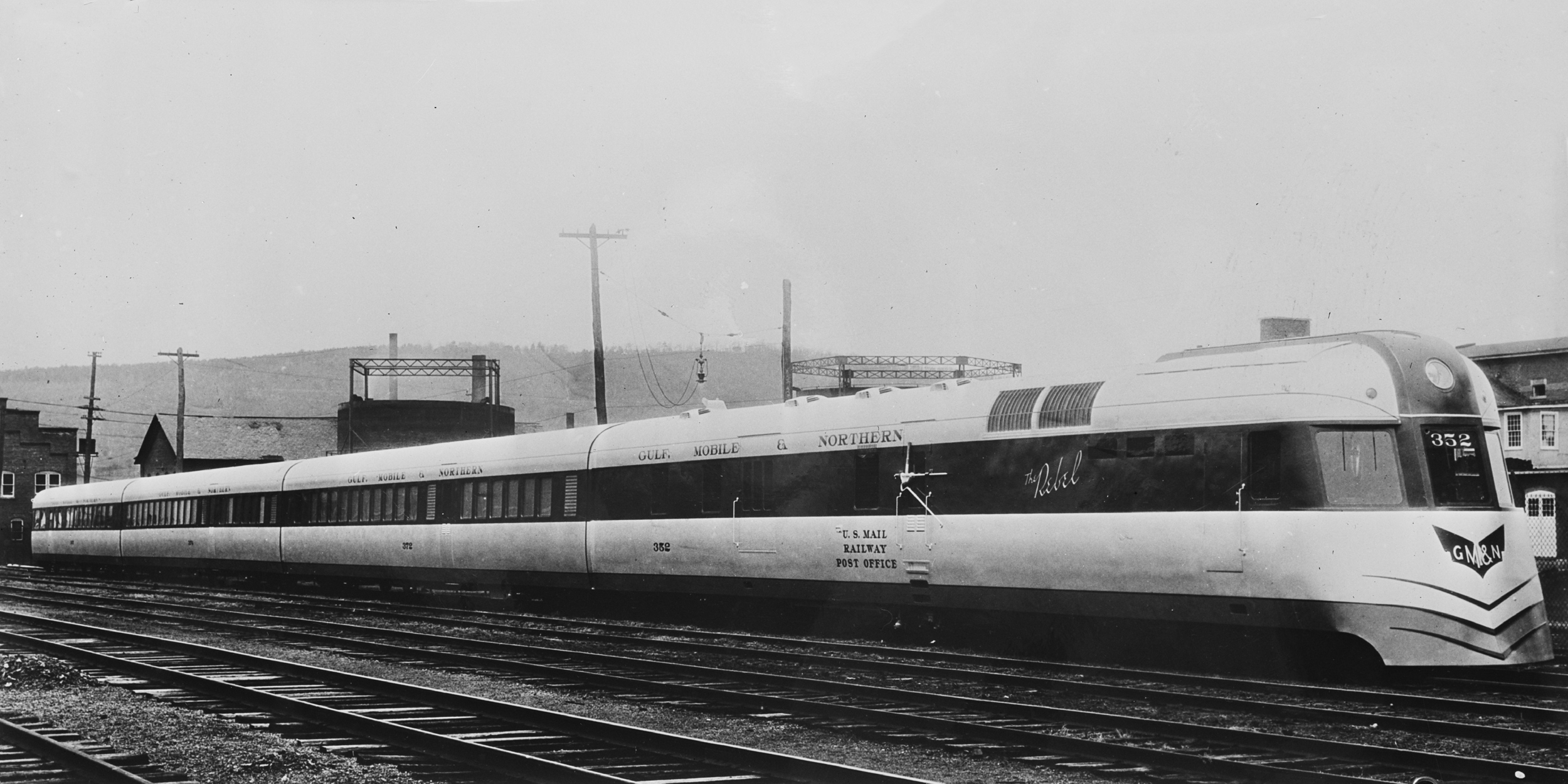 A glass plate negative by Harris & Ewing (photographer) featuring the original "Rebel" trainset, circa 1935. It was manufactured by American Car & Foundry. Unlike most other early semi-articulated trainsets, the "Rebel's" cars could be freely interchanged, which became a common setup for future streamliners. The small fleet included three buffet-coach cars and two sleeper-observations.

What became the classic passenger train remembered today actually has its beginnings with predecessor Gulf, Mobile & Northern.  The GM&N gained the distinction of launching the very first streamliner in the South when the Rebel debuted in 1935.

The trainset was built by American Car & Foundry with the power car provided by the American Locomotive Company (Alco).

This car carried a unique 2-B wheel arrangement and 600 horsepower, model 531 prime mover design by Alco-predecessor McIntosh & Seymour (this engine powered many of Alco's earliest diesels, such as the HH series switchers).  Aside from the engine the car also featured a baggage compartment and area for a small Railway Post Office (RPO).

The trainset was styled by noted industrial designer Otto Kuhler (among his other accomplishments included Baltimore & Ohio's Royal Blue, Milwaukee Road's Hiawathas, and Lehigh Valley's Black Diamond) with a shovel-nosed look sporting shiny stainless-steel with a deep crimson band running the length of the consist.

While the train’s initial route connected Jackson, Tennessee, with either New Orleans or Mobile, Alabama (the train split at Union, Mississippi), in 1942 it was stretched to St. Louis after the merger between the M&O and GM&N, and the trainsets were pulled off line in favor of traditional, streamlined passenger equipment. 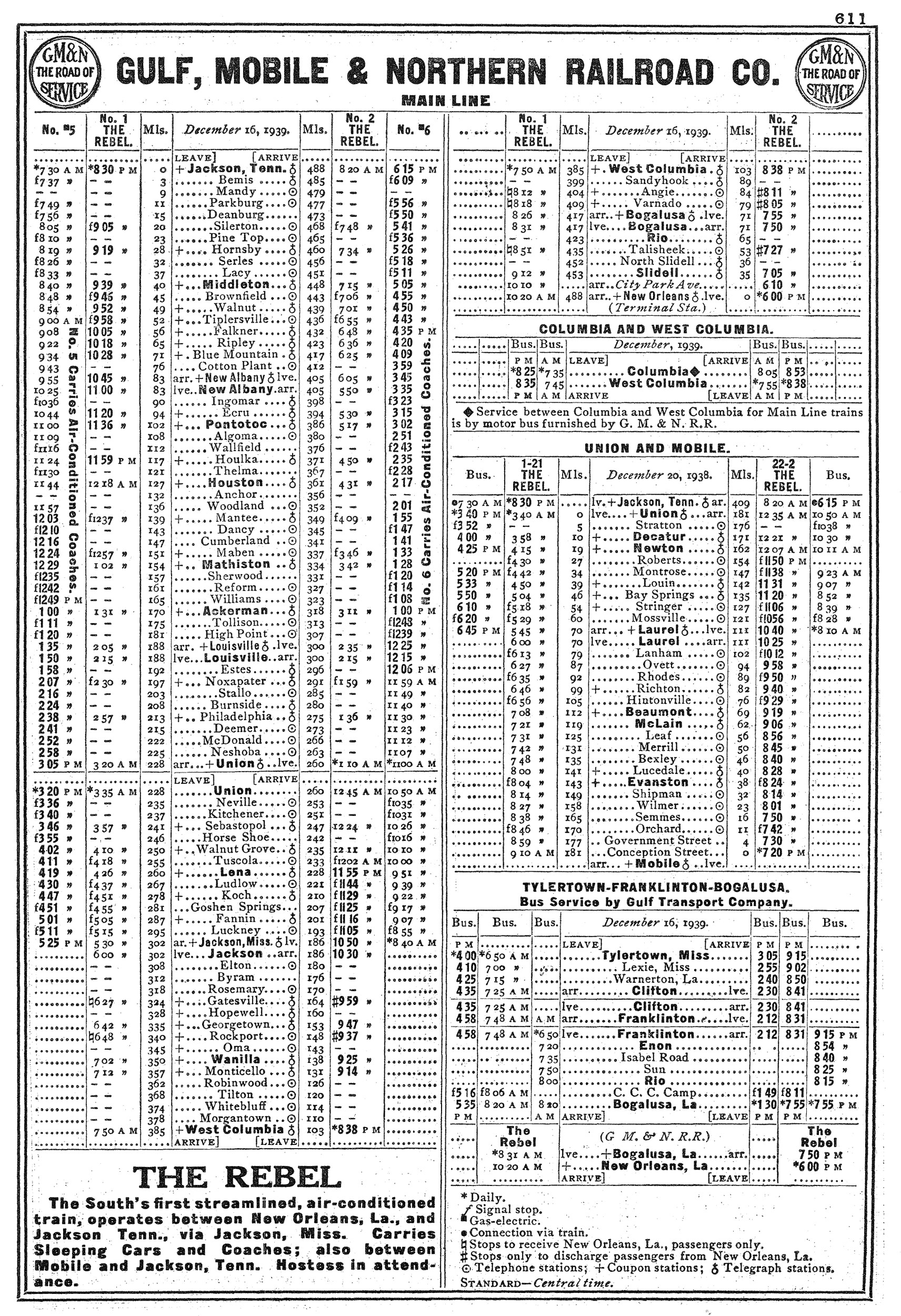 A Gulf, Mobile & Northern timetable of the original "Rebel" as listed in the 1940 Official Guide. Author's collection.

This train may not be as well known as the Super Chief or Empire Builder but it brought about two drastic upgrades to passenger rail operations. First, the original Rebel was a streamlined “trainset,” similar to that of the Burlington’s famous Zephyr 9900.

However, along with including more boxy streamlining than the Zephyr, the train also had the ability to interchange or add cars (this was not the case with the Zephyr and many other articulated trainsets debuting around the country at the time which were rigid, semi-permanently coupled trains).

In 1937 an additional order was placed for an additional power car and two coach-sleepers.  Lack of ridership north of Jackson, Mississippi meant that a three-consist only normally met demand while south of that point an extra coach was added.

The Rebel also featured on board hostesses, perhaps the very first train to introduce such services.  The original train could connect Jackson with New Orleans in just over fourteen hours while it reach Mobile in under thirteen hours.

Both trips carried an average train speed of between 32 and 34 mph.  When the GM&N and Mobile & Ohio merged in 1940 the Rebel was extended to St. Louis according to Mike Schafer's and Joe Welsh's book, "Streamliners, History Of A Railroad Icon."

The merger also brought about a new train known as the Gulf Coast Rebel (affectionately known as the "Big Rebel"), operating between St. Louis and Mobile along a route spanning 648 miles.

This particular Rebel stuck with the beautiful livery of crimson and silver with power provided by a GE-Alco DL-series, slant-nosed diesel locomotive (similar in looks and length of an EMD E series model).

Interestingly, while the original Gulf Coast was advertised as a streamliner it utilized modernized heavyweight equipment within its consist rebuilt at the old M&O Iselin Shops in Jackson.

It also carried rebuilt Pullmans, which were overhauled at Pullman's shops in Chicago.  During 1947 the GM&O ordered new lightweight cars from American Car & Foundry, which reequipped the Gulf Coast Rebel and other traditional trains.

In any event, the Gulf, Mobile & Ohio simply could not effectively compete with the more luxurious and faster running times of trains like the Panama Limited and City of New Orleans offered by rival Illinois Central.

As a result of this, and other factors, the railroad decided to focus more on freight services, and less on passenger operations, pulling all of its trains operating south of St. Louis in 1958 (which included the entirety of the Rebel services).