The Virginian Railway’s EL-C rectifiers were the most advance electric locomotives the railroad ever owned.

Built in the late 1950s by General Electric they produced over 3,000 hp and were quite adept at hauling coal out of the southern West Virginia mountains.

Interestingly, however, they lasted but a mere year under VGN ownership before the railroad was purchased by the Norfolk & Western and all were sold by 1962 when the N&W shutdown the Virginian’s electrification.

Practically new at that point the freight motors caught the eye of the New Haven, which used the locomotives along its southern electrified territory.

After the Penn Central merger in 1968, which swallowed the New Haven (essentially a forced arrangement of the former acquiring the latter), the units roamed all over the Northeast, often running the ex-PRR Northeast Corridor.

The electrics have the rare distinction of being owned by five different railroads during a career that spanned less than 30 years.

With the formation of Conrail in the mid-1970s the electrics saw use for just a few more years before being retired in the early 1980s (Amtrak's ownership of the NEC made freight service on the corridor a complicated arrangement). 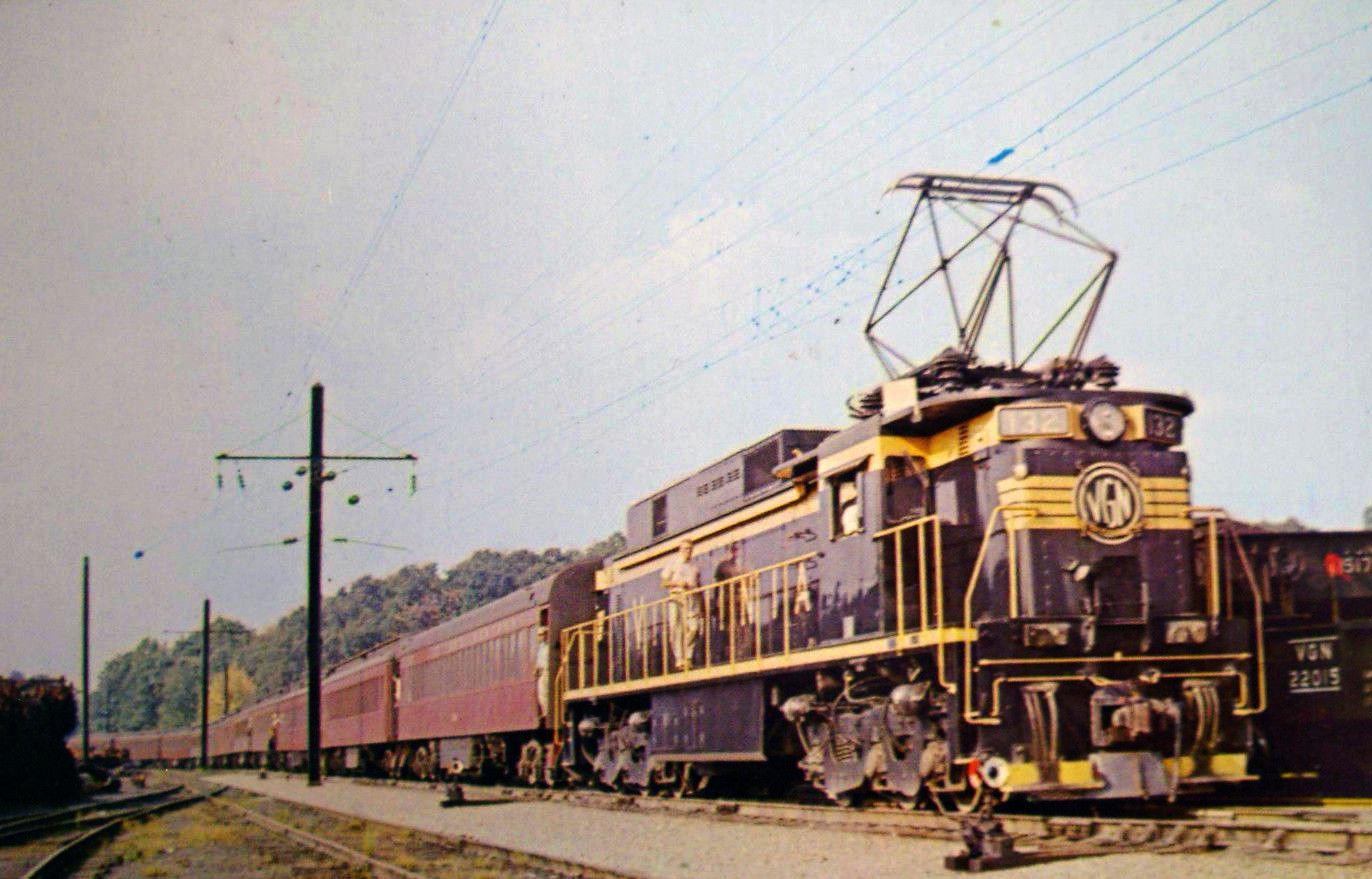 Virginian Railway EL-C #132 has a special National Railway Historical Society fan trip (using Norfolk & Western coaches) at Roanoke, Virginia for the group's 1957 annual convention that summer. The trip was quite extensive and included a visit to the railroad's massive trestle spanning the New River at Glen Lyn, Virginia (since dismantled).

The Virginian Railway electrification project was one of the most unique operational practices in eastern Appalachian railroading until it was shutdown in 1962.

In terms of the railroad industry’s history the Virginian Railway was a very late entry, as its original main line was not completed until 1909 connecting Deepwater, West Virginia in the heart of Appalachian coal country with Norfolk, Virginia and the tidewater ports.

The railroad was the dream of Henry Rogers and William Page, and while they were harassed and hassled by the larger railroads that did not want more competition, particularly for the rich coal traffic the region provided, they completed their railroad nonetheless.

While never anywhere near as large as nearby competitor Norfolk & Western the Virginian proved its worth through a superbly engineered main line and non-stop belt line of coal.

By the 1950s the Virginian's current class of electrics were either worn out or could not keep up with the growing coal tonnage moving from mines in southern West Virginia to the tidewater ports around Norfolk, Virginia.

At the time, the railroad's newest motors were the streamlined Class EL-2B purchased from General Electric in 1948.  While powerful at 6,800 horsepower per set, the Virginian owned just four sets of the motors.

So, to complement and update its fleet in 1958 the VGN would take delivery of its final motors; twelve ignitron rectifiers (also from GE) designated class EL-C.

Even more contemporary than the EL-2B design the EL-Cs featured the now-classic diesel road-switcher design (and accompanying cab design) with a C-C wheel arrangement (i.e., six powered axles in total).

The EL-Cs were rated at 3,300 horsepower and delivered 98,500 pounds of tractive effort. 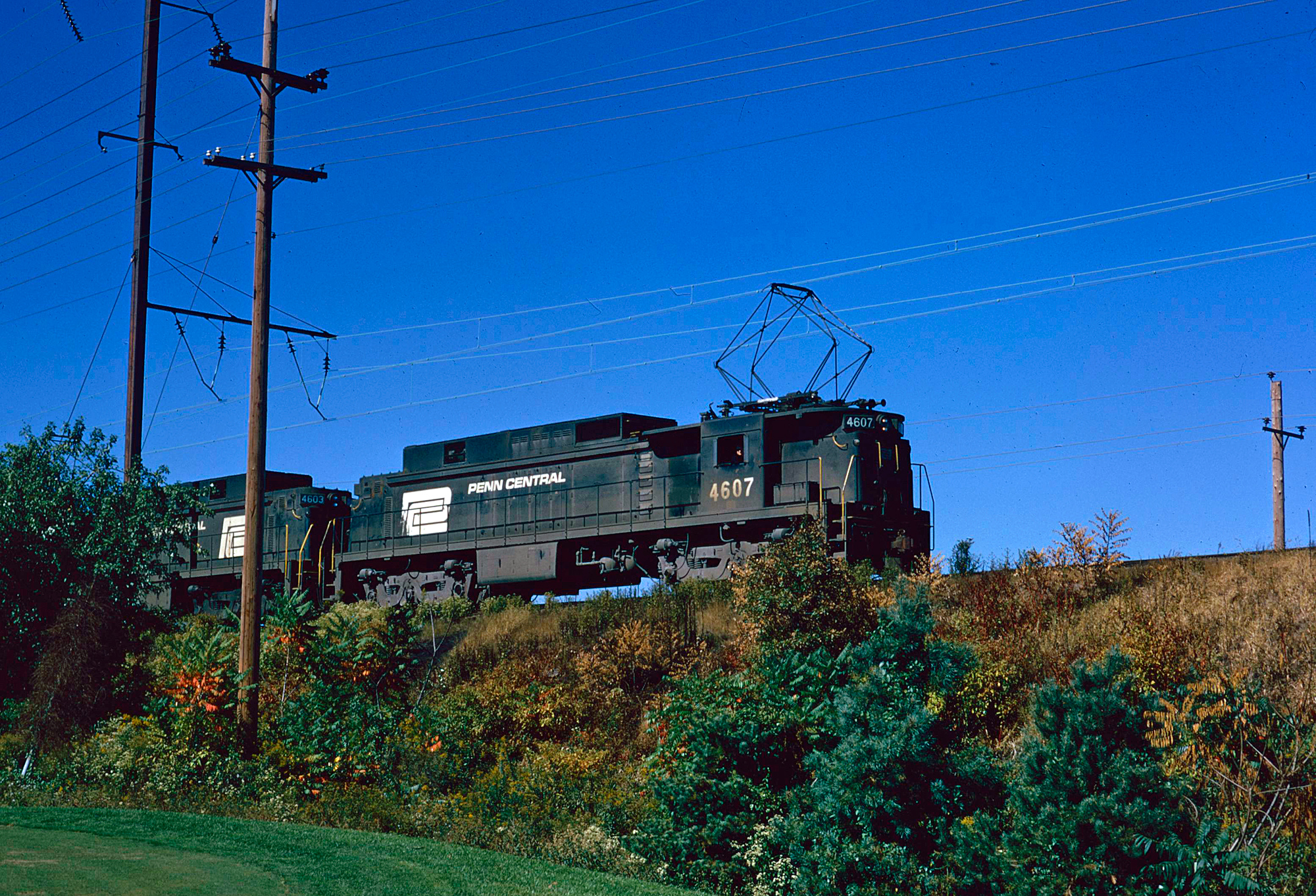 Penn Central E33's #4607 and #4603 in service along the Northeast Corridor on October 12, 1972. Location not listed. Bob Tennert photo. American-Rails.com collection.

As a side note, the EL-Cs had a very interesting history. They lasted a mere year under Virginian ownership as the Norfolk & Western purchased the railroad in 1959.

The N&W saw no need to continue operating its former competitor's electrified operations and so shut off the electricity and ripping down the wires in 1961.

Additionally, since the N&W already served the same regions it had no use for the Virginian's double-track main line and pulled up one of the two and used the VGN’s route in conjunction with its own for a double-track, eastbound-westbound configuration.

The EL-Cs thus went on to be purchased by the New Haven which reclassified them as EF-4s for use in freight service.  Overall, it was quite a deal since the electrics were just a few years old at the time.

The New Haven went on to be folded into the Penn Central, where they were again reclassified as E33s.

Of course, the ill-fated Penn Central lasted not even a decade before its monumental collapse and bankruptcy forced the government to create the Consolidated Rail Corporation (Conrail), which began operations in the spring of 1976.

The few that remained in service under Conrail remained classified as E33s until the carrier shutdown electrified operations in the early 1980s, earning the EL-Cs a unique status of being owned and operated by five different Class Is!


While the Virginian was never a large railroad and lasted a mere 50 years as an independent company it was an extremely well managed and profitable carrier that gains its distinctiveness from operating an almost entirely electrified system.

Most of the VGN’s electric locomotives have since been scrapped (including most of its locomotive fleet in general) but at least two EL-Cs survives: