The Red Arrow was the Pennsylvania's top train in the New York to Detroit market.  While the PRR offered competitive service between the two cities it struggled for dominance against long-time rival New York Central and, surprisingly, the Baltimore & Ohio.

The train's history dated back to the 1920s although it came of age during the streamliner era when the Pennsy revamped its entire fleet offering accommodations typical of the railroad's distinguished trains during that period.

As the public left trains for other modes of transportation after World War II the PRR was forced to downsize its massive fleet, the largest in the nation, during the 1950s.  The Red Arrow was an early victim of these initiatives, partly due to the competition's better services, and the train barely survived to see 1960 following years of cutbacks.

The Red Arrow, trains #158 and #159, first joined the PRR's timetable during the early fall of 1925 originally running only between Pittsburgh and Detroit with first-class, extra-fare accommodations while through cars were provided into New York on other trains.

However, that soon changed within a few months and according to the Pennsylvania Railroad Technical & Historical Society service was extended  directly to New York on December 20th that year.  The train was also given a new number, 68, although it a remained an eastbound-only operation for nearly a year until westbound #69 was finally added on September 26, 1926.

With the onset of the Great Depression the Arrow lost some of its top services as the PRR looked to economize during these lean years; extra-fare was dropped and the first coaches appeared in the consist. 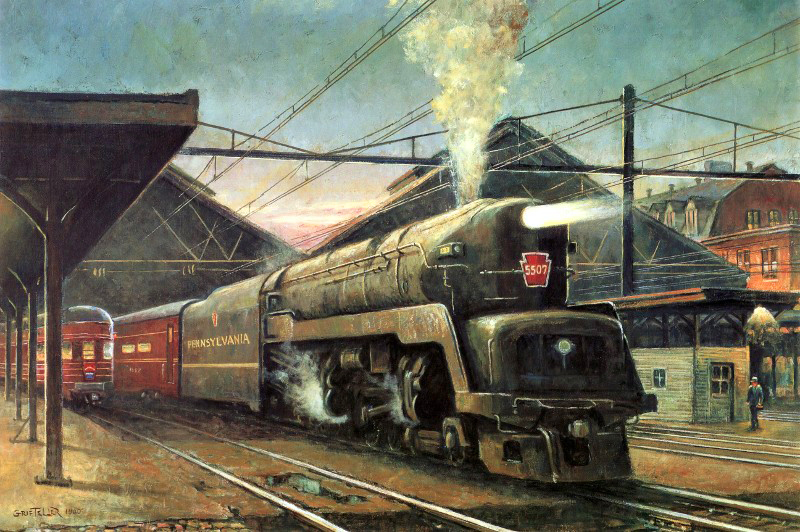 As those tough times gradually subsided and the Pennsy entered the streamliner era in 1938 the Red Arrow became the railroad's preeminent service between Detroit and New York with a connection available to Washington, D.C.

Unfortunately, as Harry Stegmaier, Jr.'s points out in his book, "Pennsylvania Railroad: Passenger Trains, Consists & Cars - 1952 Volume I," even though the PRR often gave the train very good equipment (although it never featured an entire consist of lightweight cars) the strategy to serve both eastern markets via one train proved rather ineffective against the competition.

The New York Central had its fast, luxurious Detroiter and the railroad spared no expense in making sure it ran with top equipment, marketing it as "All Pullman."  Additionally, the Baltimore & Ohio had its Ambassador, a fine train that served the Detroit to Baltimore/D.C. market very well.

In most cases the PRR offered one of, if not the best, services in every market it served between New York and Chicago.  However, Detroit was a different story and while the Red Arrow was indeed a fine train it did struggle against the NYC and B&O.

When rail travel was still at its height in this country, and Detroit a booming and vital commercial metropolis many railroads, from both the east and west, offered premier trains to the Motor City.

Following World War II the Arrow began fielding evermore lightweight cars, usually in the form of sleepers ranging in accommodations from roomettes and duplexes to sections and double-bedrooms.  The train's other amenities included a lounge, dormitory car, reclining seat coaches, and a rebuilt, modernized heavyweight diner from the D78dR Class. 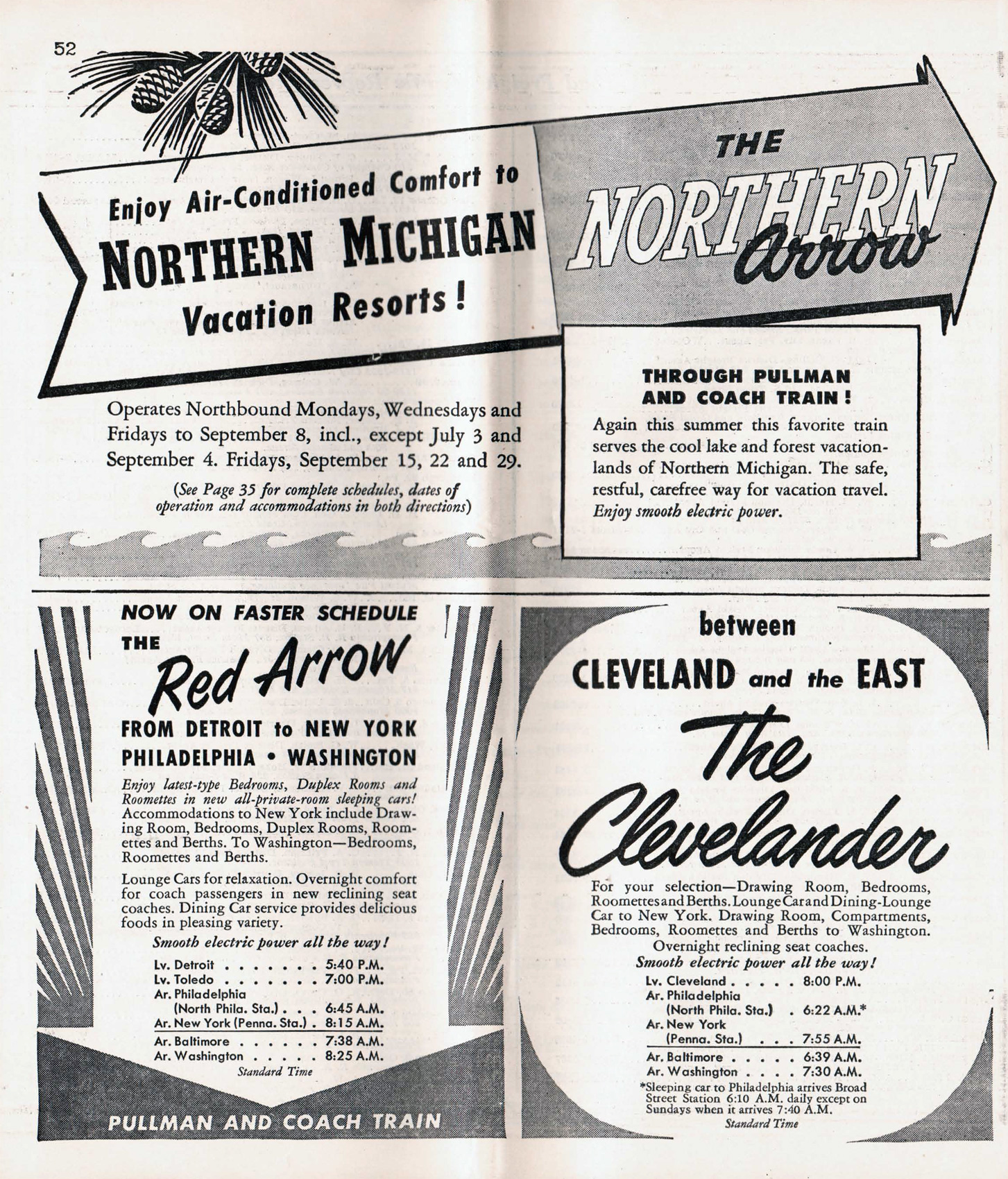 While the NYC nearly always provided the Pennsy serious competition in any market it is somewhat surprising that the B&O did too in this case.  The B&O was a first-class, high-service eastern trunk line as well although the road was neither as financially strong nor offered the direct, high-speed routes of its counterparts.

Nevertheless, its top trains, ranging from the Capitol Limited to National Limited, were just as prestigious.  The Ambassador offered travelers such accommodations as lounge service, reclining seat coaches, and sleepers ranging from duplex roomettes to the popular bedroom-observation-lounge.

Through the early 1950s the train was well-patronized thanks to these fine amenities along with the B&O's legendary customer service.  The Red Arrow was noteworthy as being the first PRR train after World War II to receive new diesel power albeit as the 1950s dawned the signs were already showing the trains' future was likely in doubt. 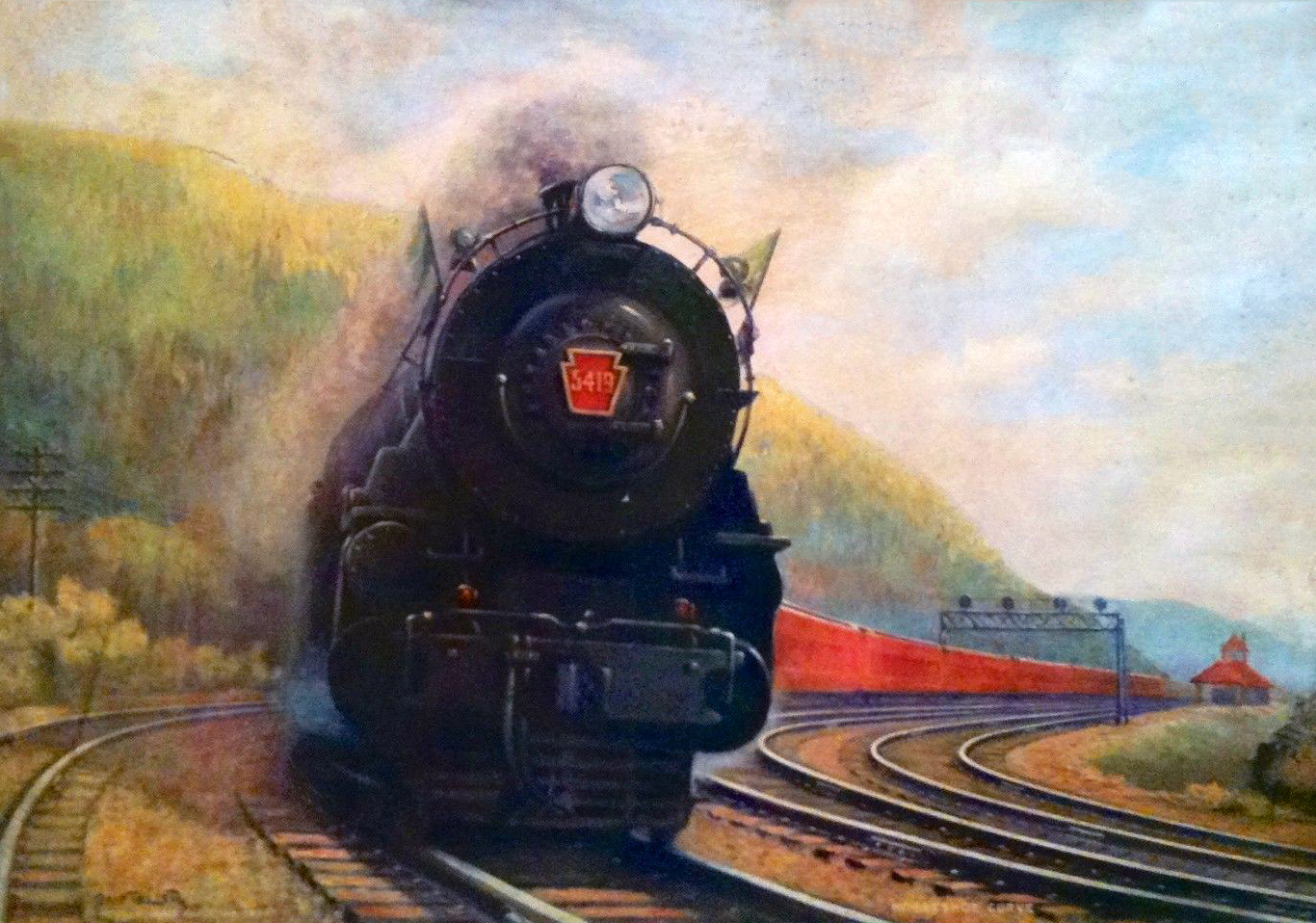 The Pennsy operated the largest passenger service in the country and soon felt the pinch of declining ridership.  The railroad was well-aware of the Arrow's struggles and, as Mr. Stegmaier notes, the train was living on borrowed time.

Beginning on April 29, 1956 it was combined east of Pittsburgh; #68 ran east with the Liberty Limited to Washington while westbound #69 was included with the Cincinnati Limited (New York - Cincinnati).

Later that October service was restored to Philadelphia but by February of 1958 it was combined permanently east of the Steel City with the Cincinnati Limited.  Naturally, ridership shrank even more and on July 26, 1959 the Red Arrow was little more than a dismal local serving Detroit and Toledo.  The train made its final run on July 26, 1960.