Sometimes forgotten among the many great feats of railroad engineering is the Pennsylvania Railroad's Rockville Bridge (sometimes called the Susquehanna River Bridge), located just north of Harrisburg, Pennsylvania along the railroad's main line to Chicago.

The original bridge crossed the mighty Susquehanna as early as the late 1840s and the current bridge was not completed until the turn of the 20th century.

Constructed during a time when engineering projects were built to last forever the impressive Rockville Bridge was so well designed and laid out that it remains in regular use today by current owner Norfolk Southern.

There is an old expression, "They just don't build things like they used to."  That very much holds true in the railroad industry where several early stone viaducts and bridges, some now over 150 years old, continue to see regular freight traffic today.

Names like Thomas Viaduct, Starrucca Viaduct, and the Morrisville–Trenton Railroad Bridge.  There is also PRR's Rockville Bridge, a magnificent structure that has been in regular service since 1902.  It was a time when the railroad, both politically and financially powerful, carried out several improvement projects which included stone-arch spans. 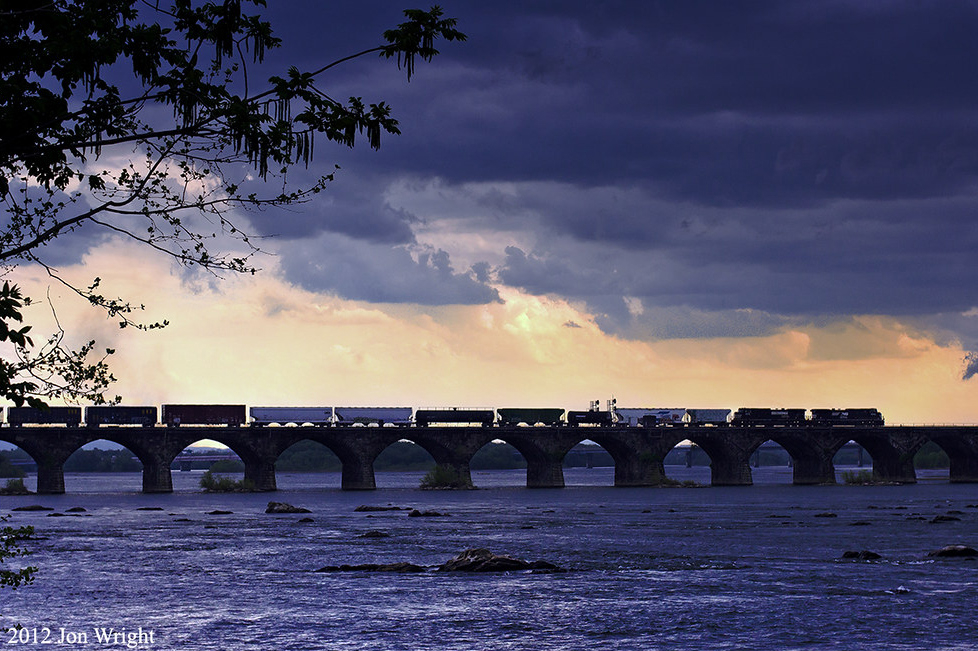 Entire libraries could be written on the Pennsylvania Railroad ranging from its history to the different businesses it owned, far, far too much to cover here which is a mere brief history of the railroad. The Pennsy was an institution to Philadelphia and Pennsylvania.

For over 100 years the keystone represented the PRR as much as it did the state itself.  It was born in Harrisburg when the legislature sought a more efficient transportation artery to protect its most important port, Philadelphia.

It also enjoyed strong financial backing as law makers and business leaders sought to ward off competitors, notably the up and coming Baltimore & Ohio.

The Pennsylvania Railroad is remembered for many things with two of the railroad's most lasting achievements its grand monument to New York City, Pennsylvania Station and its legendary passenger train, the Broadway Limited. 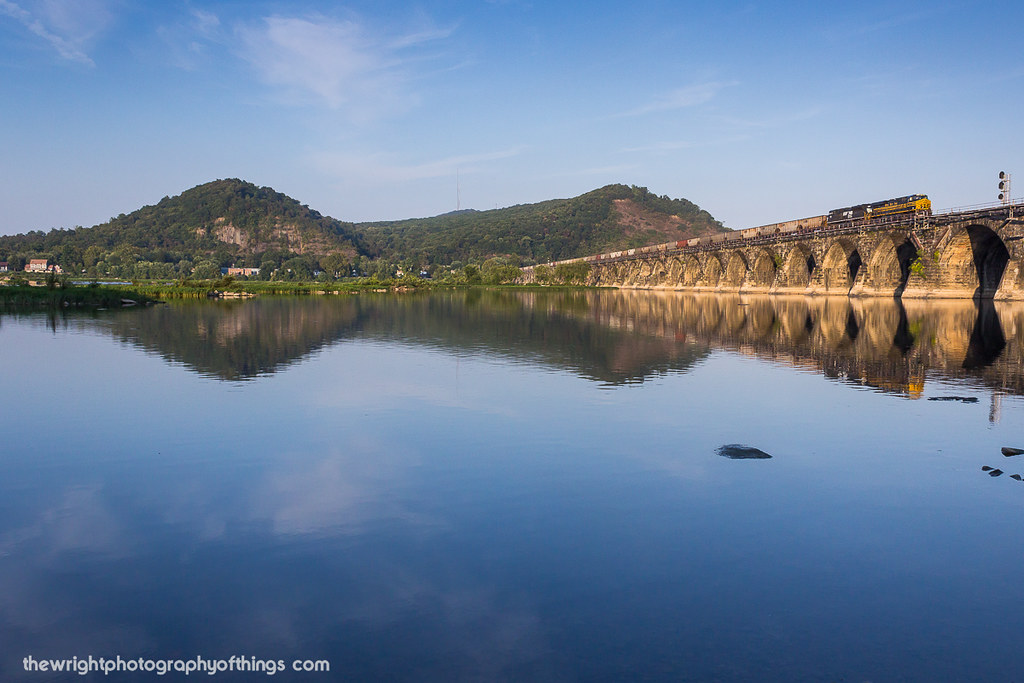 The PRR also had the most extensive electric operations of any private carrier in the country, most of which is still operated today by Amtrak and regional commuter systems.

Beginning in 1915 the Pennsylvania Railroad began to electrify portions of its eastern main lines where commuter and passenger operations were the heaviest and by the late 1930s electrification had reached south to Washington, D.C., west to Harrisburg, and north to New York City.

In all, most of the PRR's system east of Harrisburg was electrified by the late 1930s.   The original bridge the PRR constructed over the Susquehanna River was completed in the late summer of 1849, which was a single-track Howe truss design but it finally gave the railroad direct access across the very wide river.

Entirely constructed of wood save for the stone piers this original bridge became outdated after about twenty years of service as traffic on the Pennsylvania Railroad was continually increasing. 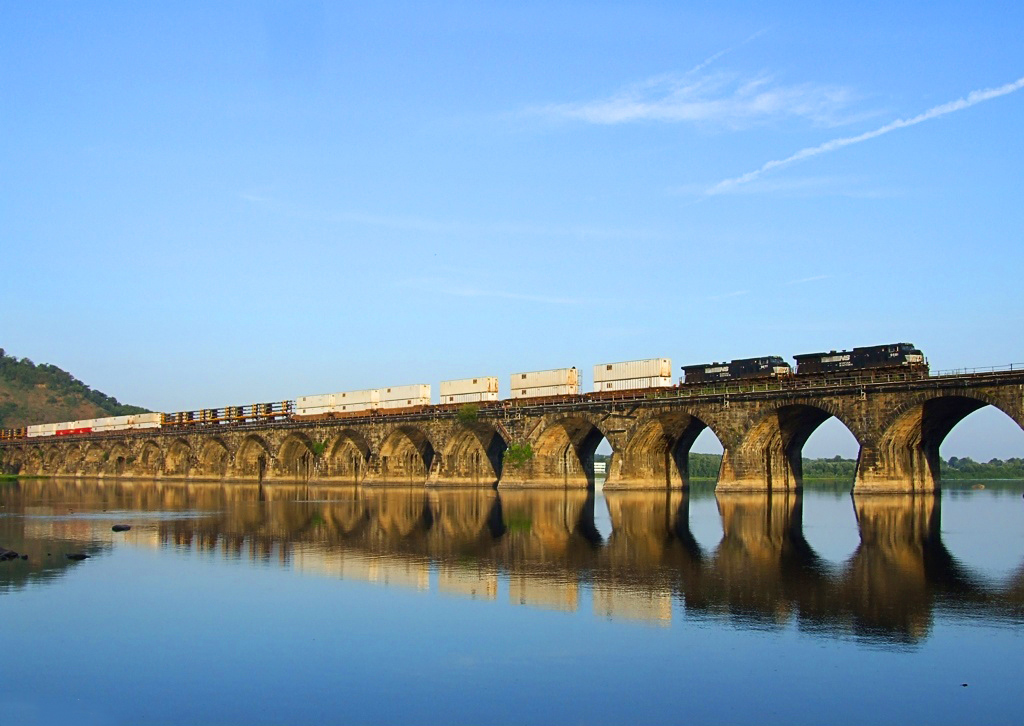 In 1877 the PRR completed a second bridge over the Susquehanna River that featured two tracks and also used the Howe truss design, constructed of iron beams and lattice work.  However, even this bridge became inefficient within 20 years.

To not only alleviate the growing congestion but to also construct a permanent fix to the problem the PRR elected to pour serious money into building the most permanent bridge-type of all, the stone arch design.

The newest bridge, which began construction in 1900, was designed and built by the Drake & Stratton Company and H.S. Kerbaugh, Inc. (both based in Philadelphia) whose Italian workers were master stone masons.

A map of the Rockville Bridge, circa 1957. Author's collection.

The latest bridge was built on a slightly different angle than the previous and was located just downstream.  For more reading about the bridge's history please click here.

When completed two years later and officially opened in late March, 1902 the bridge, which used cut-stone from local quarries, was more than a half-mile long at 3,820 feet and was an impressive 52-feet wide, allowing it to house four tracks!

The bridge featured 48 spans, all of which were almost exactly 70-feet wide. At the time of its completion the bridge was the longest stone-arch design in the world and still remains as one of the longest ever built.  For additional reading about the bridge please click here. 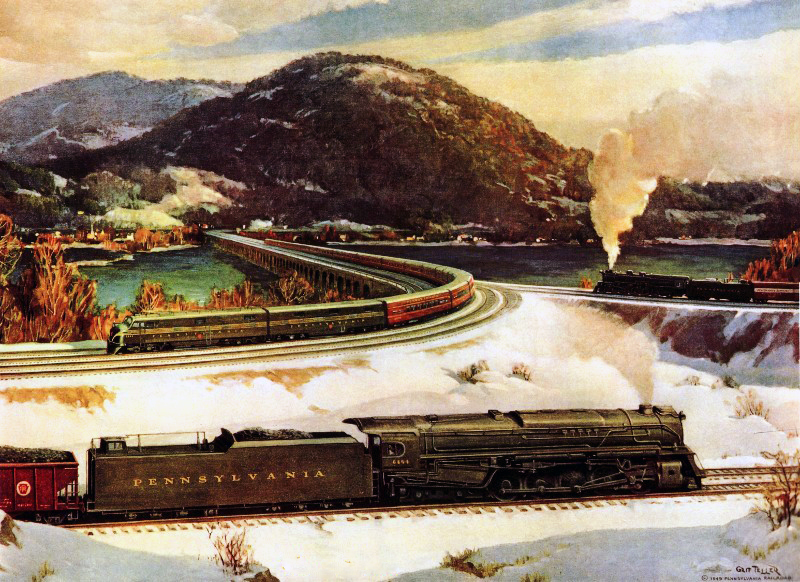 "Crossroads of Commerce." Artwork by Grif Teller, featured in the Pennsylvania Railroad's 1950 annual calendar. This scene depicts the PRR alignment from the Susquehanna River's east bank.

The bridge retained its four-track main line until the 1980s when one line was removed. Then, after a container train was blown off the bridge in the late 1990s current owner Norfolk Southern further reduced the tracks to two, centering them in the middle of the structure so as any further severe wind incidents wouldn't result in the train going into the river.

Today, the bridge remains as one of the most impressive bridge engineering feats ever completed and at over 100 years old and still in excellent condition it remains to be seen just how many more years it will remain in operation.