The Roscoe, Snyder and Pacific Railway was chartered in the early 20th century with hopeful intentions.

Its promoters held dreams of not only connecting its namesake cities in Texas but also reaching the Northern Panhandle, stretching into New Mexico, and perhaps even further west (thus the reason for "Pacific" in its name).

Unfortunately, the much larger Santa Fe beat out the R-S Pacific Route reaching first the cities it had intended to connect.

However, the RS&P became a successful short line anyway thanks to connections with two major, Class I lines. Its status as a bridge carrier allowed it to prosper for years, particularly following World War II.

Ironically, it was deregulation which led to the road's downfall as following the 1980 law its interchange partners simply kept the freight for themselves.

Within just a few years the RS&P was in such financial distress that it had completely shutdown by the mid-1980s. Today, a short section remains in use around Roscoe to serve a single shipper. 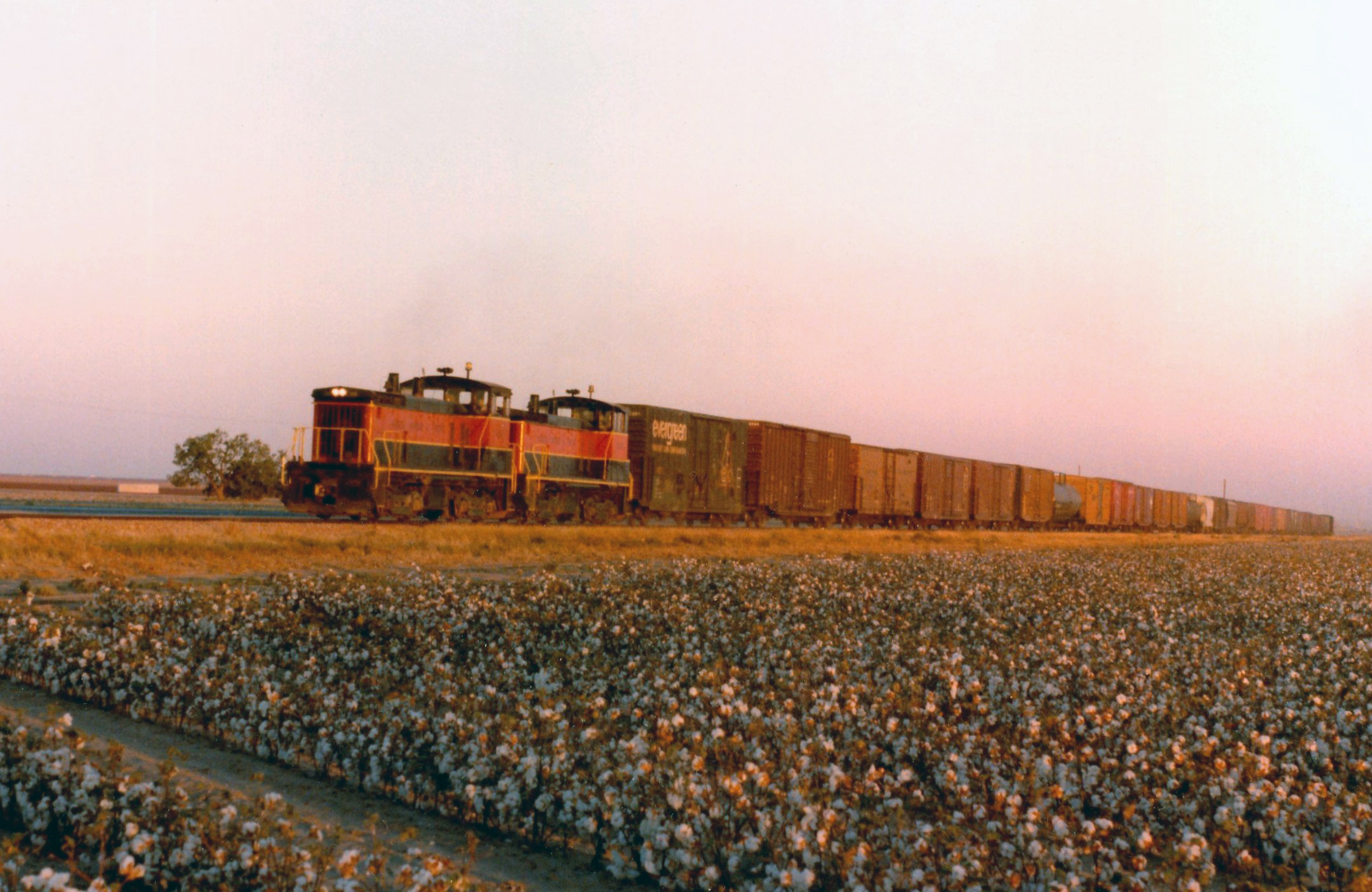 Both of Roscoe, Snyder & Pacific's SW1500's have a long freight between Roscoe and Snyder in the 1970s.

The history of the Roscoe, Snyder and Pacific Railway officially begins on October 1, 1906 when it was chartered by Texas businessman General F. W. James with the hope of building a line west from Roscoe where it would establish a connection with the Texas & Pacific Railway main line (a Missouri Pacific subsidiary).

James' intent with the railroad was to connect Roscoe with Snyder, Post, and eventually Lubbock as well as continue the line westward into New Mexico and perhaps even further.

After rounding up $200,000 in initial capital construction began and was opened to Snyder on May 22, 1908 (30.4 miles in length according to the company timetable). A little over a year later in September of 1909 the RS&P had opened a 40.5 route to Fluvanna.

Unfortunately, any further growth northwesterly was stopped cold by the Santa Fe.

With much deeper pockets the large transcontinental system decided that it wanted its own line from Lubbock to Coleman (south of Abilene) so that it could connect with its subsidiary the Gulf, Colorado & Santa Fe.

In the process, the AT&SF opened an interchange with the RS&P at Snyder although with a railroad now directly serving Lubbock there was little need to build its own route to the city.

Because of this the dreams of a grand system stretching more than 200 miles from northern Texas to points west died although the company always retained its "Pacific" title.

Despite this setback the railroad's management realized a new freight potential lay as a bridge route since it connected to both the T&P and Santa Fe. 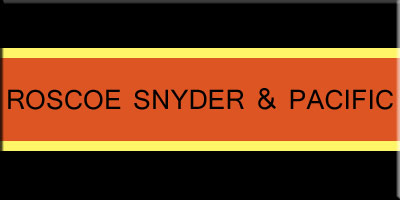 During its early years the R-S Pacific Route struggled to remain profitable although it was able to stave off receivership and bankruptcy.

Ultimately, its success as a bridge route was thanks to a concentrated effort in convincing shippers from afar to route their products along the Roscoe, Snyder and Pacific Railway.

For instance, the company had agents stationed in major cities from coast to coast such as Fort Worth, New York, Los Angeles, Pittsburgh, and San Francisco.

Overall, their efforts proved quite successful as the railroad boasted a diverse traffic base from California perishables to general merchandise and by the time of World War I was earning more than $150,000 annually in profits. 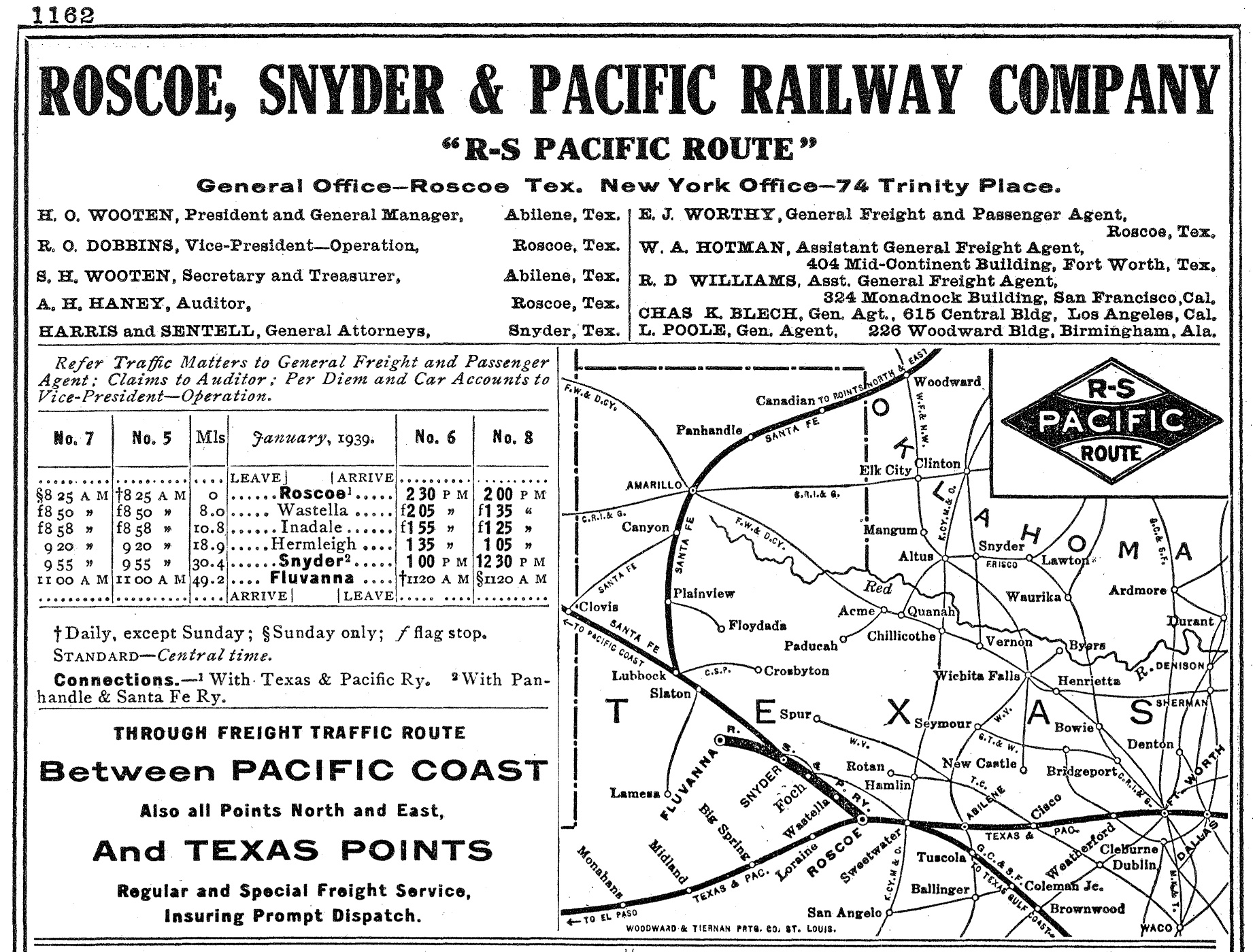 Due to the RS&P's size passenger traffic was never a boon for the railroad, typically earning no more than $10,000 or $15,000 annually with trains not needing more than just a few coaches to satisfy demand.

The first cutbacks on the system occurred in 1941 when the 10-mile Fluvanna extension was abandoned due to lack of traffic.

Then, in 1953 all passenger services were discontinued. From this point forward the RS&P focused only on its freight services where it again saw a high level of success from the 1950s onward.

One reason for this was its August, 1949 purchase of an EMD SW1 diesel switcher, #100, to begin replacing its steam locomotives.

During its first four decades of service the railroad relied on a varying array of steamers; early on this included 4-4-0 American #1 but in later years the railroad rostered 4-6-0 Ten-Wheelers and a single 2-6-2 Prairie.

In 1962 the company branched out into the rail car-repair business, converting its old steam shops in Roscoe for the task.

Eventually, the RS&P incorporated the operation as the National Railcar Company and interestingly it has outlived its parent, still in business today as Eagle Railcar Services both building and repairing cars.

Ironically, the railroad's most lucrative years occurred directly before its downfall; during the 1970s it was earning more than $1 million annually and featured a staff of more than 70 employees.

Sadly, though, the 1980 Staggers Act which deregulated the railroad industry literally caused the RS&P's traffic to dry up almost instantly as the MP and AT&SF kept the traffic for themselves which had been routed over the short line.

With no other major sources of traffic available the company was destitute, abandoning its entire line in 1984 except for a short four-mile stub around Roscoe. Today, the remaining section of the R-S Pacific Route is still in use by Eagle Railcar.