Another of Amtrak's Midwestern regional trains is the Missouri River Runner, which connects St. Louis to Kansas City.

Until the late 2000's, these services were known by three different named trains the Ann Rutledge, Kansas City Mule, and St. Louis Mule.

While the latter two were a creation of Amtrak itself back in the early 1980s the Ann Rutledge is actually quite historic with a heritage that dates back to the 1930s when the route was owned by the Baltimore & Ohio Railroad.

The name carried on under later successor Gulf, Mobile & Ohio and even Amtrak continued to use it for several decades before finally opting to merge all three under one banner which became the River Runner.

Today, the train continues to grow in popularity (within the last few years ridership has really picked up) and because of the relative short corridor it is hoped that one day it will be operated at speeds over 100 mph. 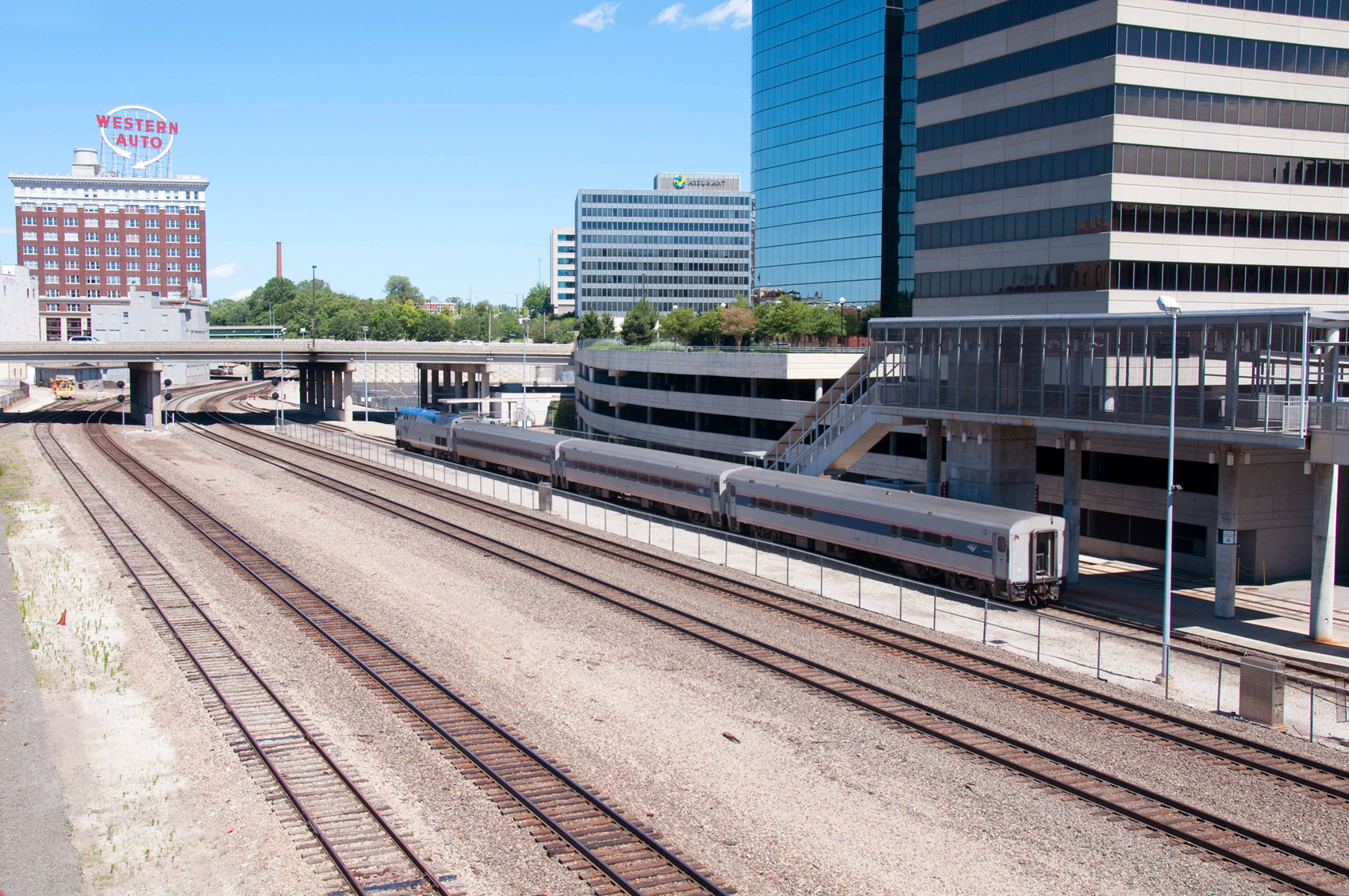 The history of Amtrak's current passenger service between St. Louis and Kansas City begins with the aforementioned Ann Rutledge.

This train was first inaugurated by the B&O in 1937 over its controlled Alton Railroad, a system that stretched from Chicago to St. Louis, and finally Kansas City making a rough "L" shape.

The Ann Rutledge was the companion run to a streamliner the B&O had launched two years prior known as the Abraham Lincoln which served Chicago and St. Louis (as such, it allowed then passengers to travel from Chicago to Kansas City via both trains).

The name of the train is said to have derived from President Lincoln's first woman he presumably loved, Ann Rutledge of New Salem, Illinois.

The B&O spent quite heavily to market its new Midwestern lines with these two trains, particularly the Abraham Lincoln with brand new equipment from American Car & Foundry that featured a likewise new boxcab diesel locomotive for power.

Unfortunately, however, the railroad never gained a competitive edge with its Midwestern lines and eventually sold the Alton to the GM&O on May 31, 1947.

The streamliner sets carried over to the new owner, which repainted them in the Alton's dark red livery but retaining both the Abraham Lincoln and Ann Rutledge names.

Under GM&O's management the latter was discontinued on April 27, 1958 although the former remained on the timetable until the start of Amtrak.

During its final years under private ownership the the Abe Lincoln sported a one drawing room/24-seat parlor car, dining lounge, and reclining seat coaches. 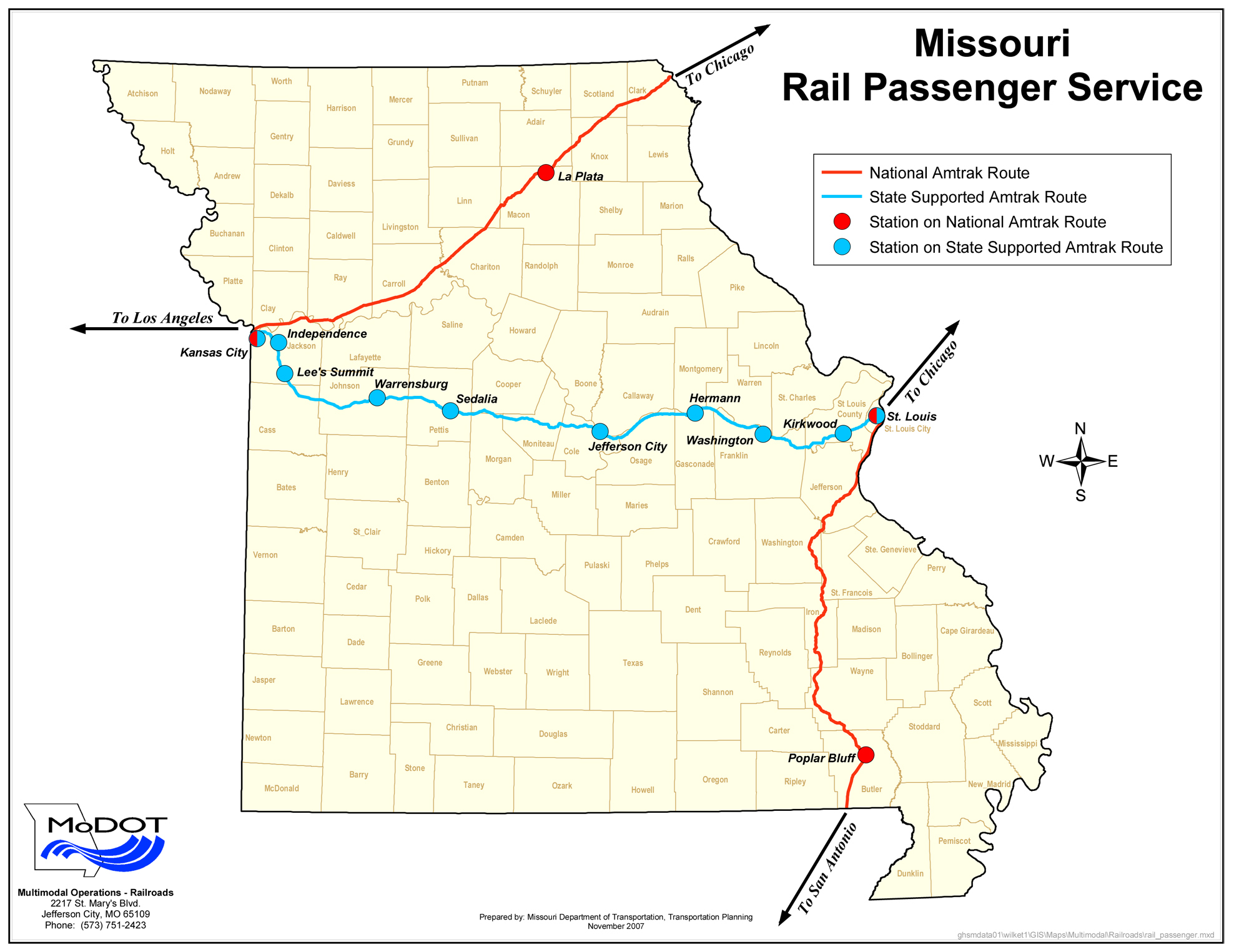 A map of the "Missouri River Runner" courtesy of the Missouri Department of Transportation.

Amtrak would bring back the Ann Rutledge on February 15, 1976, again as a companion to the Abe Lincoln although services during these years consisted primarily of Amfleet coaches and perhaps a café car, a situation that changed little over the next three decades.

Finally, in 2009 the carrier decided to end all four trains; the Ann Rutledge, Kansas City Mule, and St. Louis Mule, and replace them with a single service (the Mules had been added to the timetable in 1980).

To find a name for this new train Amtrak held a contest called "Name The Train" in 2008. In January, 2009 the winner was revealed as Keith Kohler for his name the Missouri River Runner.

Today's version of the train is partially subsidized by the Missouri Department of Transportation, which explains the use of the Missouri name.

Today, the train's consist continues to be relatively light as mentioned above; a General Electric P42DC diesel locomotive is typical power while Horizon Fleet coaches and a café-business car provide the usual accommodations for passengers (although there is both standard and business class services available on trains).

The corridor is roughly 283 miles in length and it typically requires just under six hours to complete a trip. Currently, Amtrak operates four daily runs over the route with train numbers 311, 313, 314, and 316. 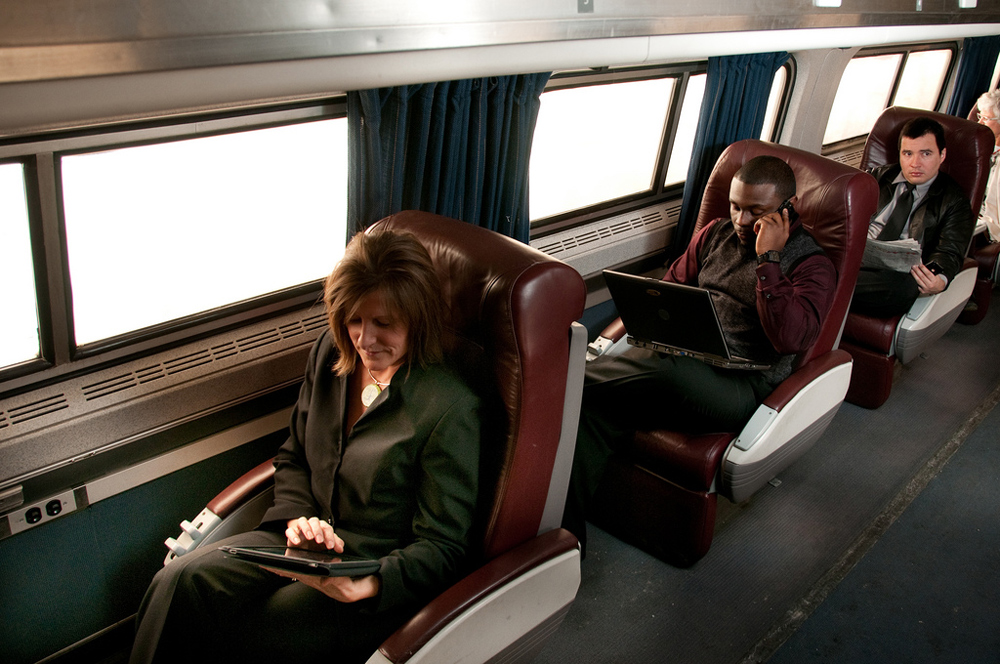 In general, Amtrak's regional corridors like the Missouri River Runner have been quite successful, particularly in recent year.

For instance, the River Runner itself has witnessed a growth of more than 25,000 annual riders between 2010 and 2011. Ridership on the route will likely continue to increase in the coming years thanks to a new siding along the line that has increased on-time arrivals and departures nearly 30% to 95%!

Unreliable schedules, in general, greatly hurt Amtrak's ridership so for this service it is gladly no longer an issue at the present time.