As its name implies the San Francisco Chief served its home city in California, operating as a fully transcontinental train to Chicago.

It was a very late addition to Santa Fe's fleet of "Chiefs" when inaugurated during the mid-1950s but not surprisingly became quite popular despite strong competition from such other roads as Union Pacific's City fleet and Southern Pacific's Daylights.

The Santa Fe spared no expense in advertising, marketing, and equipment to provide top-notch accommodations among its entire flagship services.  Even today, the folks who were lucky enough to ride its trains still speak fondly of the first-class services.

The train operated predominantly with handed-down streamlined equipment from other Chiefs but in later years received upgraded or new Budd-built cars as well.

In typical Santa Fe fashion service remained at a high level throughout the 1960s, leading all of the up until Amtrak's debut on May 1, 1971 when the San Francisco Chief was finally discontinued. 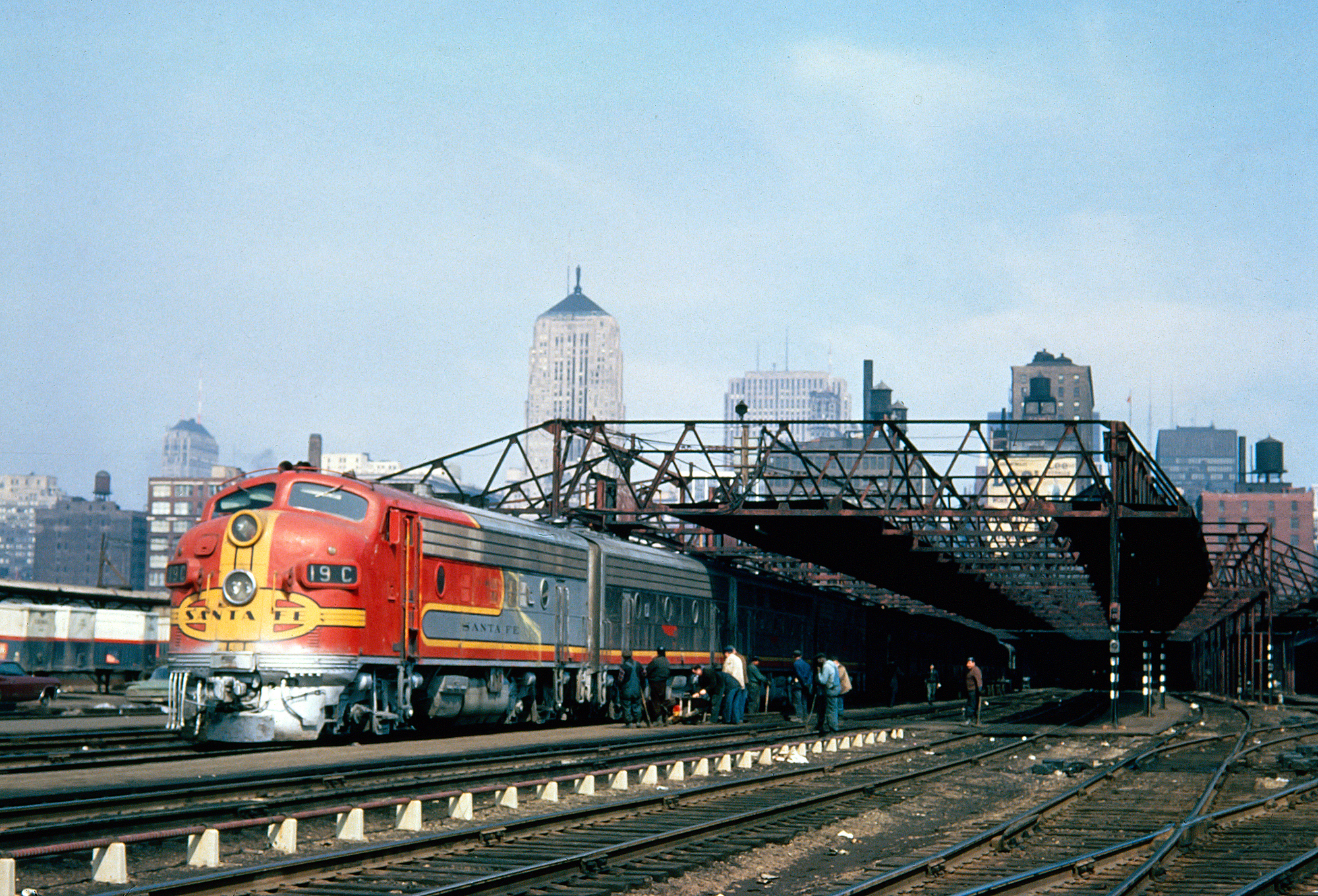 By the post-World War II era the Santa Fe was already a legend in the field of rail travel with names like the Chief, Super Chief, and El Capitan that had all been dressed as streamliners in stunning stainless steel and Warbonnet paint during the mid/late-1930s.

The railroad spared no expense in making sure its premier transcontinental trains were the epitome of luxury both inside and out, matching or exceeding anything the competition had to offer.  After nearly four decades of service it never wavered from this belief and continued fielding clean equipment with top accommodations that were always on time right up until Amtrak took over intercity operations.

For instance, the Santa Fe held its Super Chief to such high standards that it kindly asked Amtrak to stop using the name after a few years citing declining service. 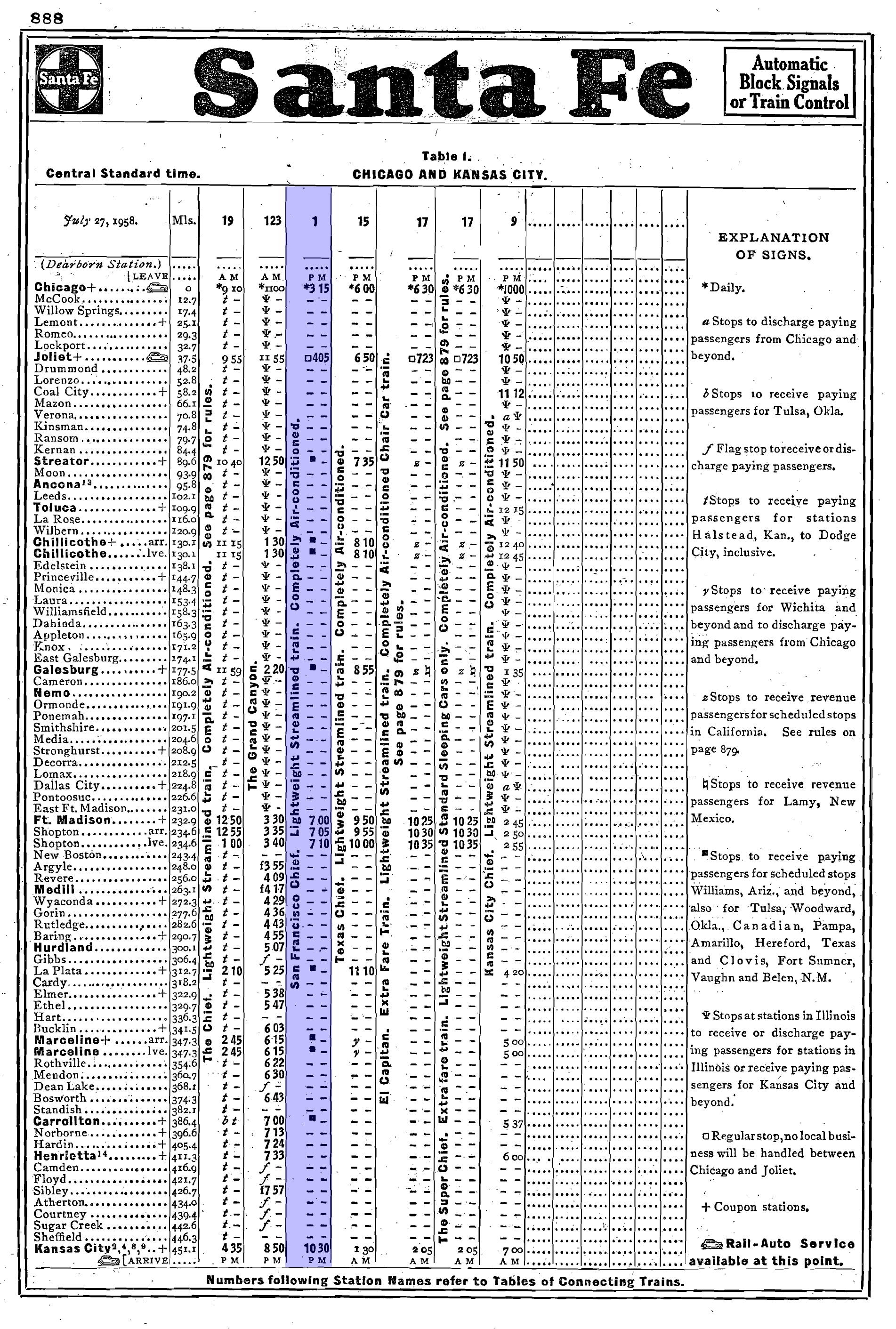 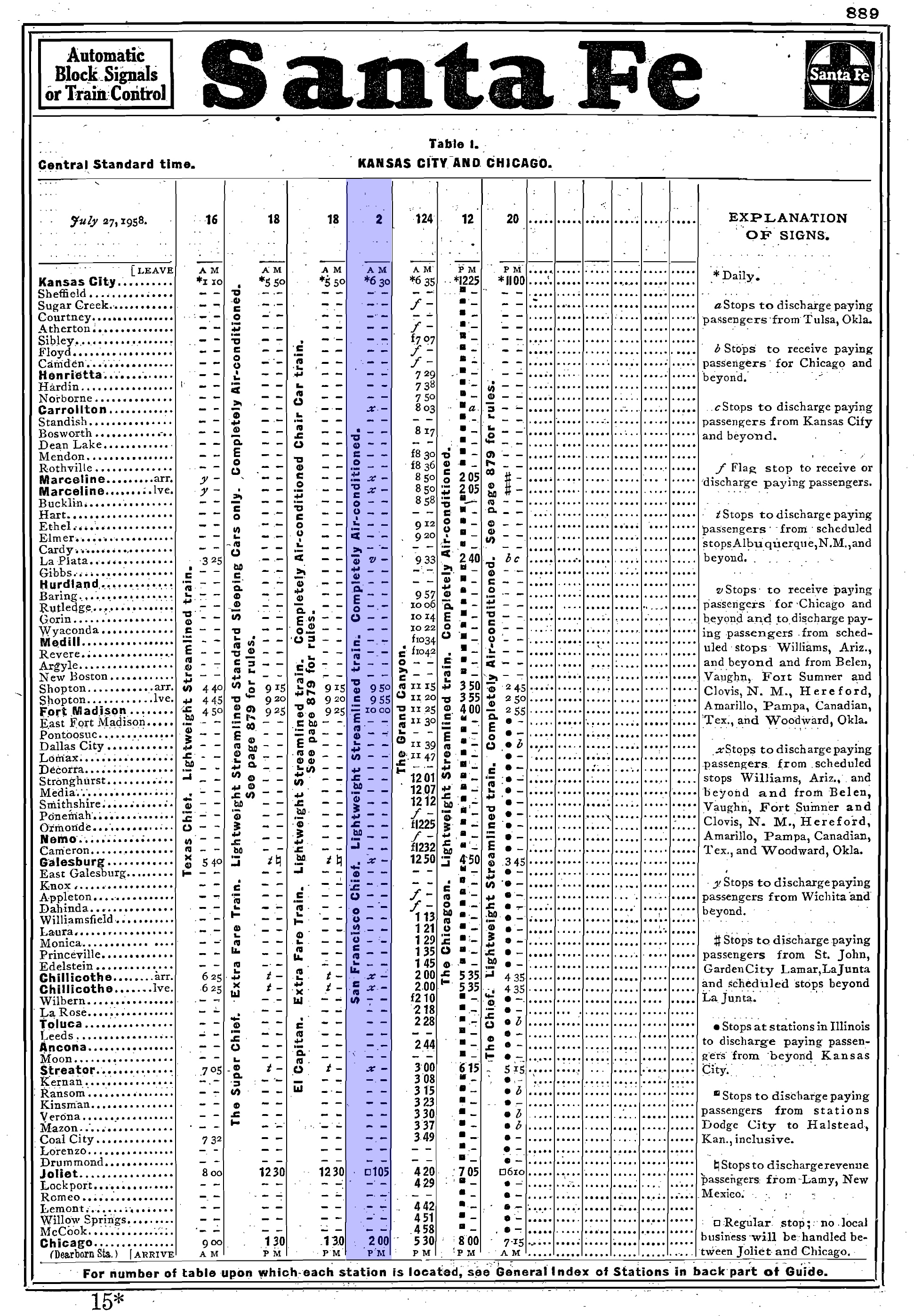 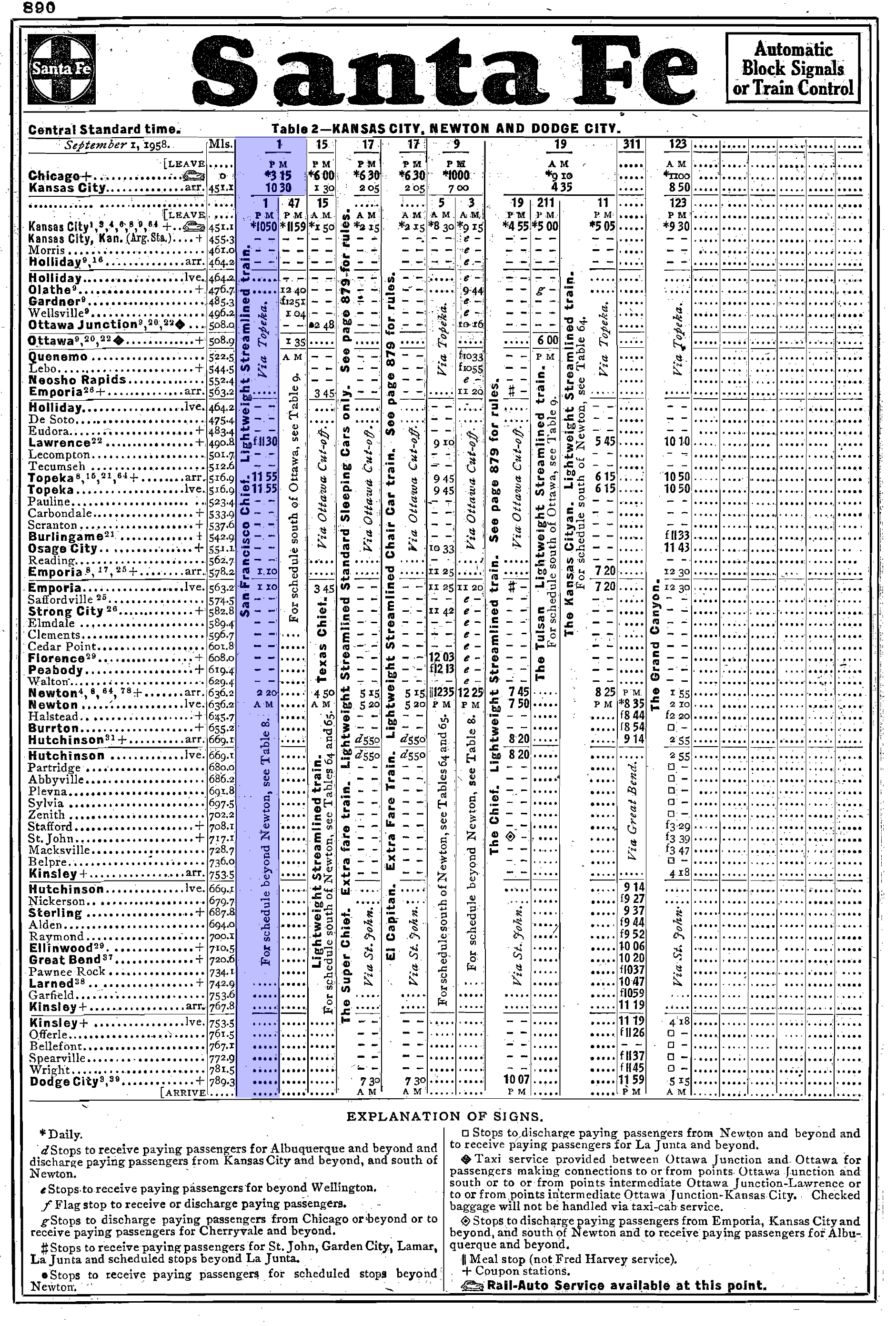 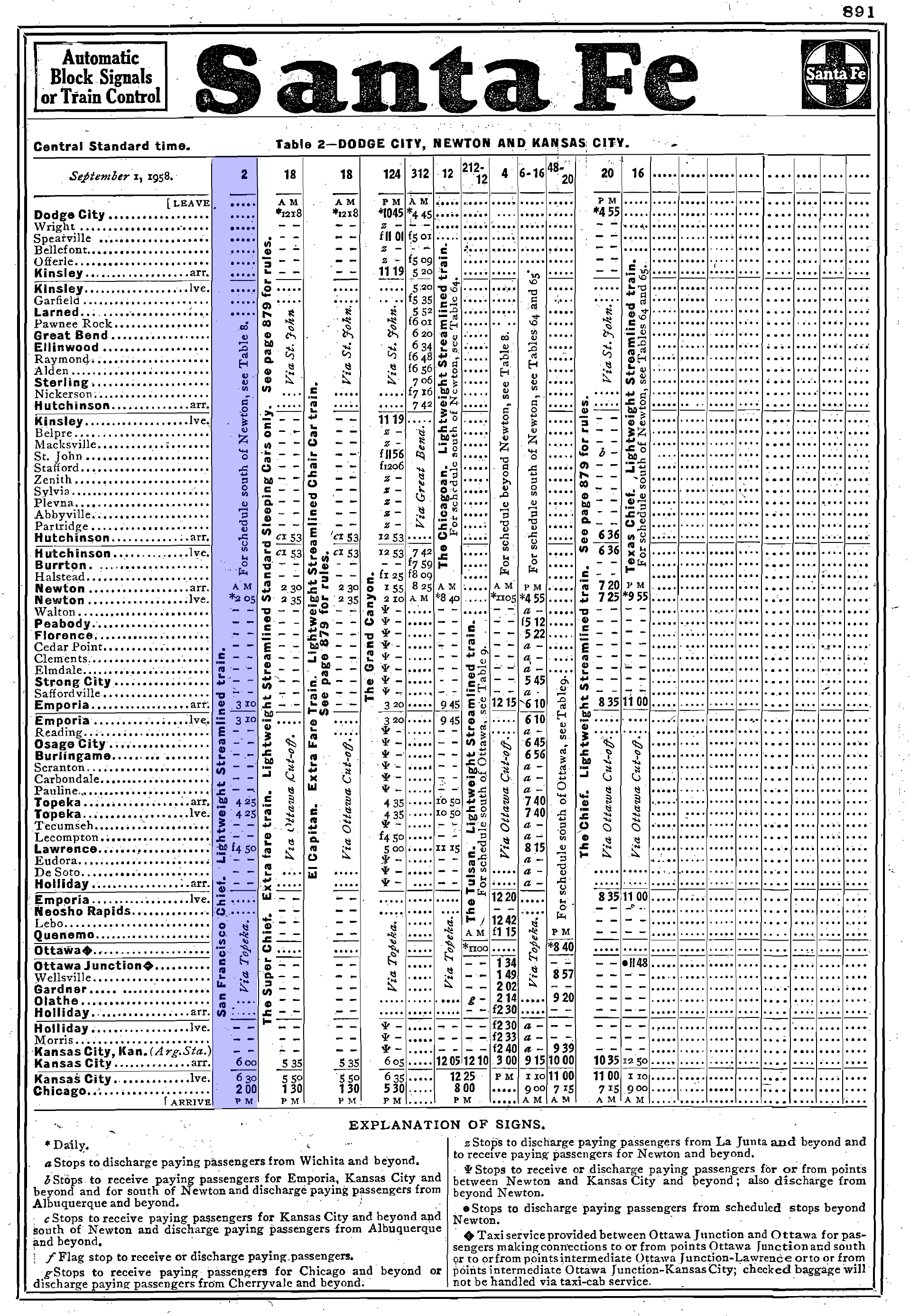 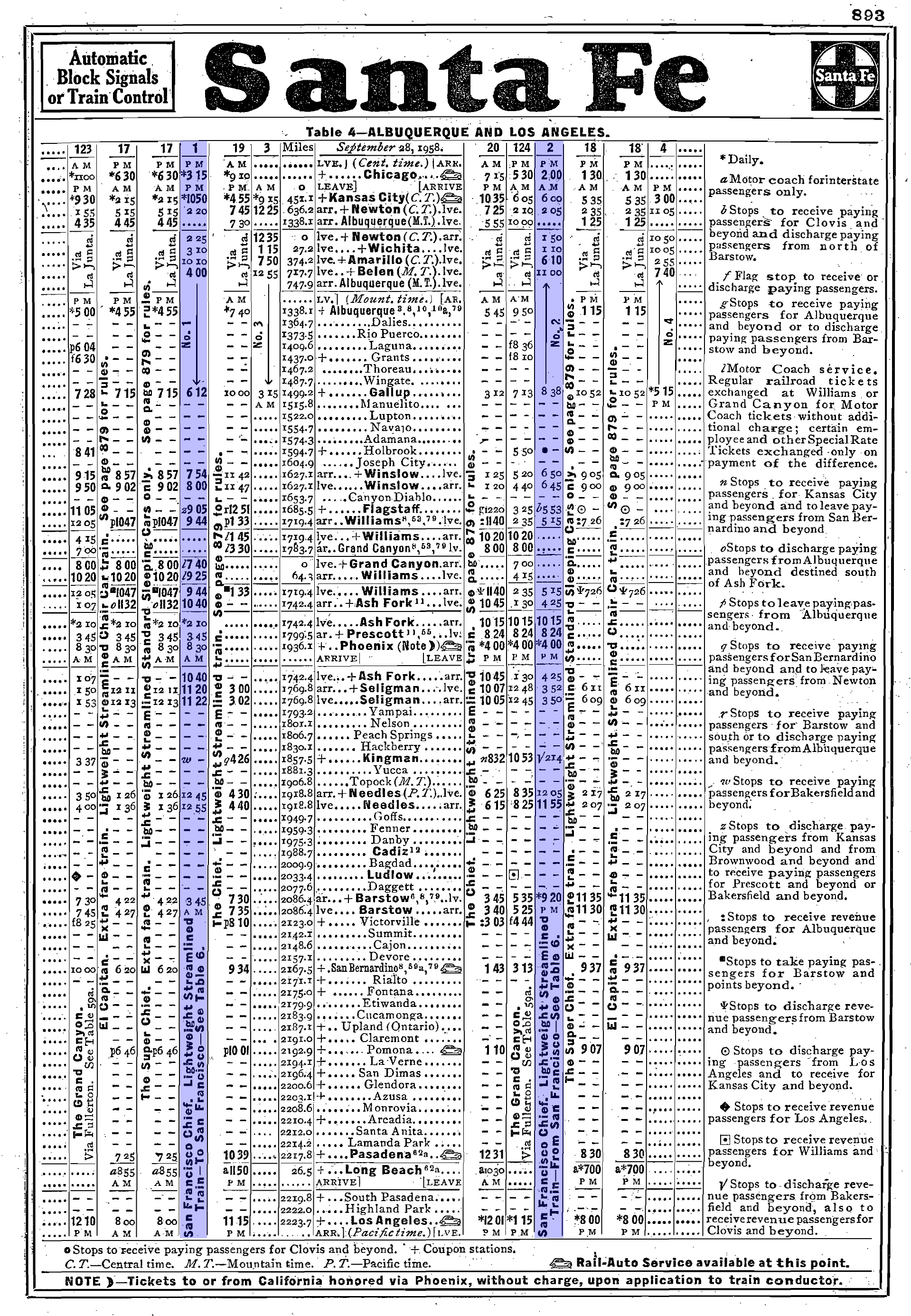 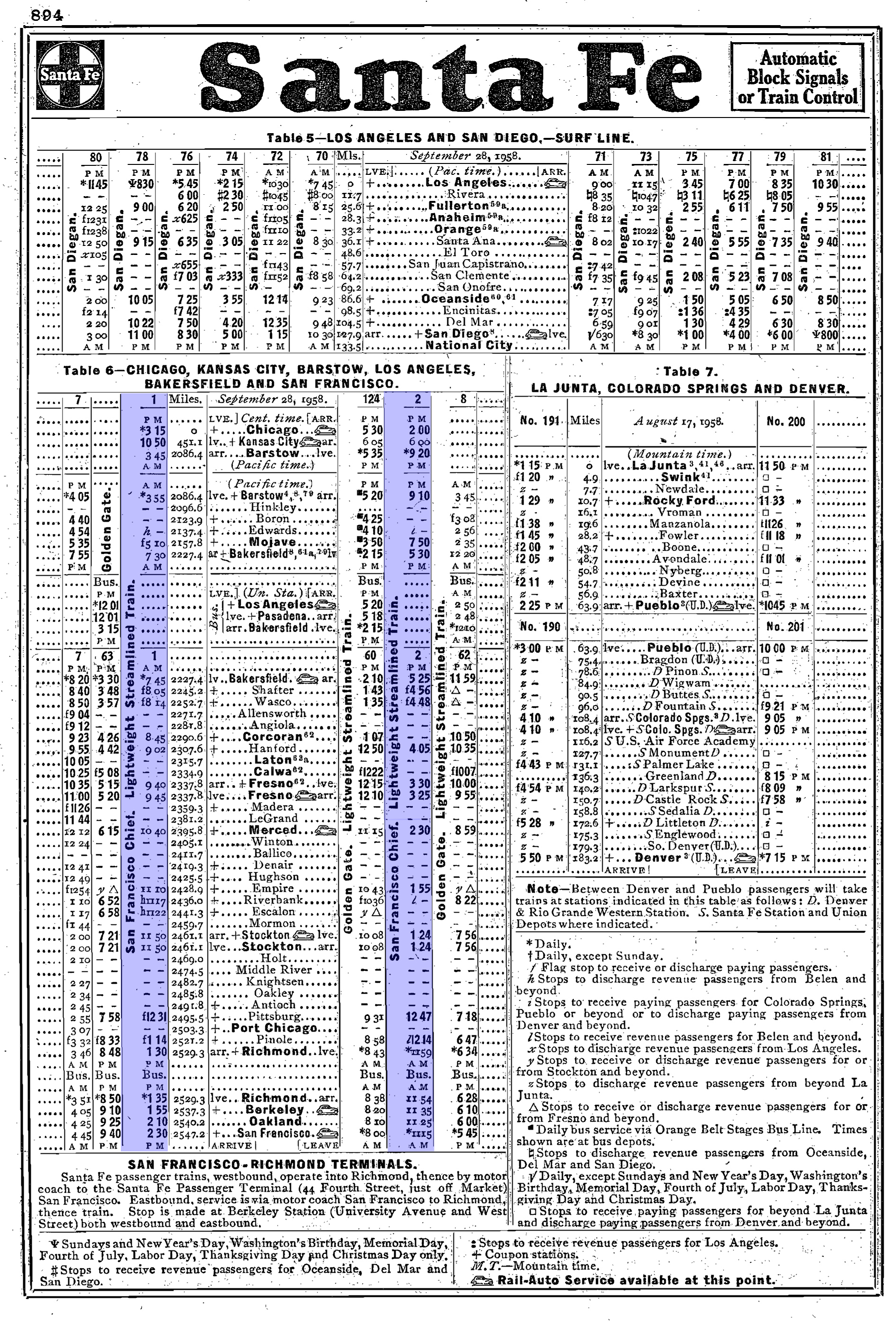 By the early 1950s the railroad felt it needed its own streamliner to San Francisco since the UP and SP operated the joint City of San Francisco and the latter provided a bevy of regional services such as the Lark, Starlight, Shasta Daylight, and San Joaquin Daylight reaching the Bay Area.

On June 6, 1954 the AT&SF launched the San Francisco Chief, the last in its fleet of fabled Chiefs.  Listed as trains #1 (westbound) and #2 (eastbound) the numbers replaced what had been previously occupied by the Scout (this train had served the Los Angeles to Chicago market).

While the railroad advertised, and sold tickets for, its new Chief as connecting Chicago to San Francisco it actually only ran as far as Richmond, California providing motor coach service via the last 43 miles into the city including the trip across the San Francisco Bay. 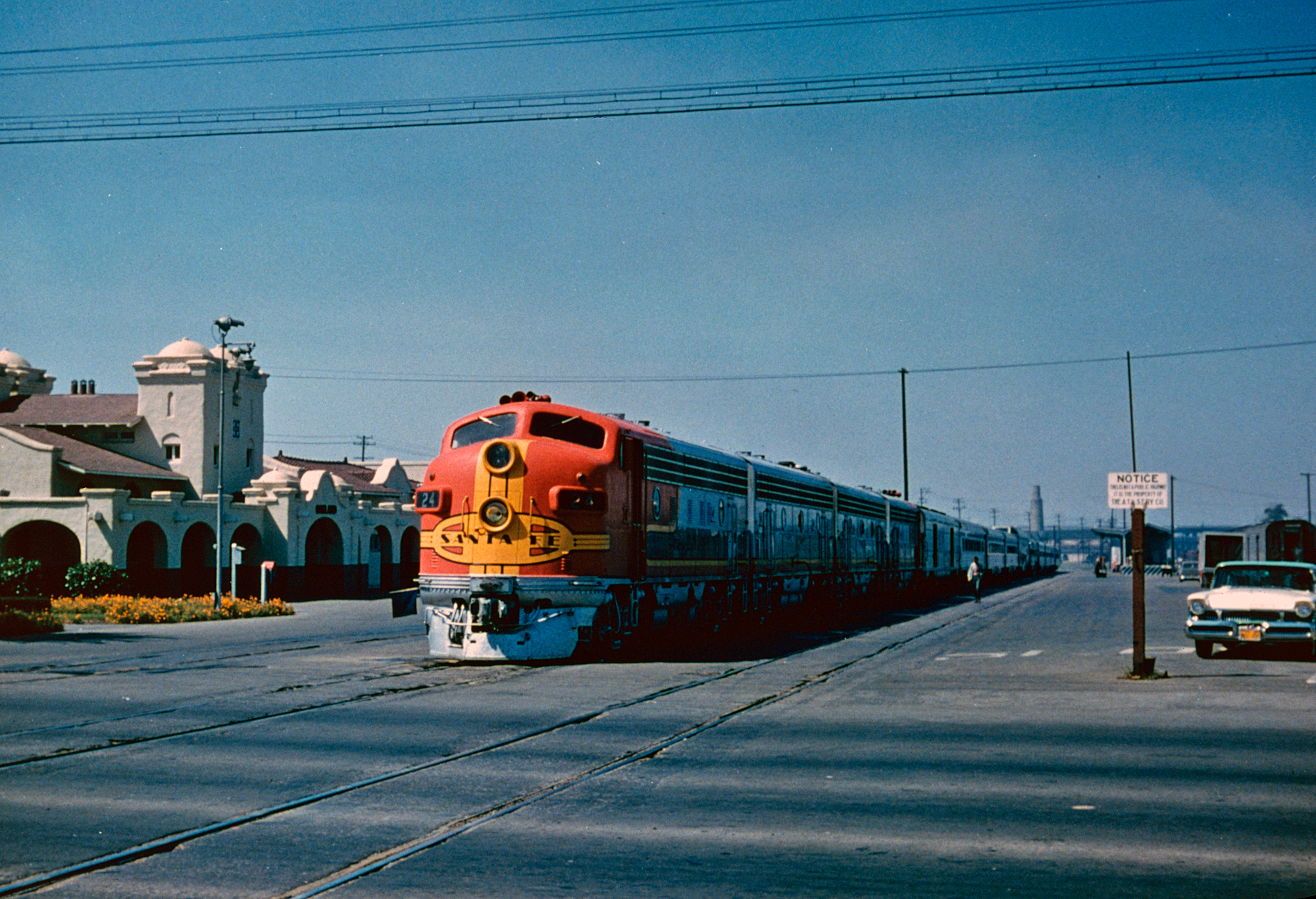 By the time the new train was inaugurated steam was well on its way out and head-end normally consisted of Electro-Motive F3s, F7s (the Santa Fe purchased few E units for passenger service), or occasionally the iconic Alco PA (the railroad owned a fleet of about 44 first-generation A an B units).

The San Francisco's consist included a diner, coaches, sleepers, and the wildly popular "Big Dome" lounges that became one of the signature draws on the train allowing passengers to take in breathtaking views of the Southwest from high above the rails.

These cars, along with most equipment the Santa Fe purchased, were products of the Budd Company.  As Mike Schafer and Joe Welsh note in their book, "Streamliners:  History Of A Railroad Icon," they were some of the heaviest ever built and the railroad acquired 14 in all to equip both the San Francisco and popular El Capitan. 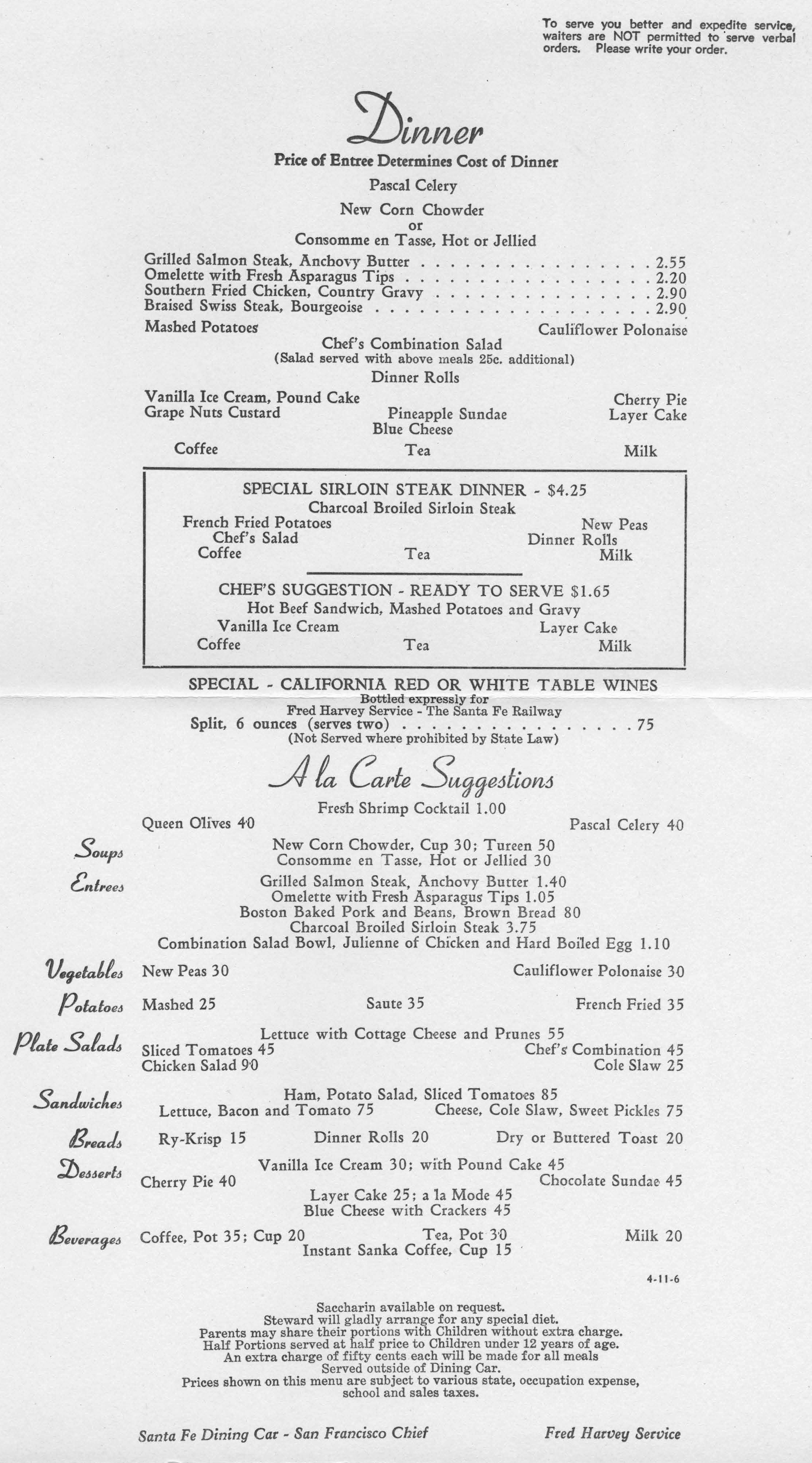 The train was christened in a manner that had become rather standard on the Santa Fe with an Indian ceremony led by Hopi Chief Taptuka using holy water from the San Francisco Mountains of Arizona.  The railroad also spent lavishly to advertise its new Chief.

One particular piece noted that:

"Eastbound from San Francisco.  Westbound to that storied city of the Golden Gate.  Here's the brand new way to go.  Santa Fe all the way.  San Francisco Chief!" 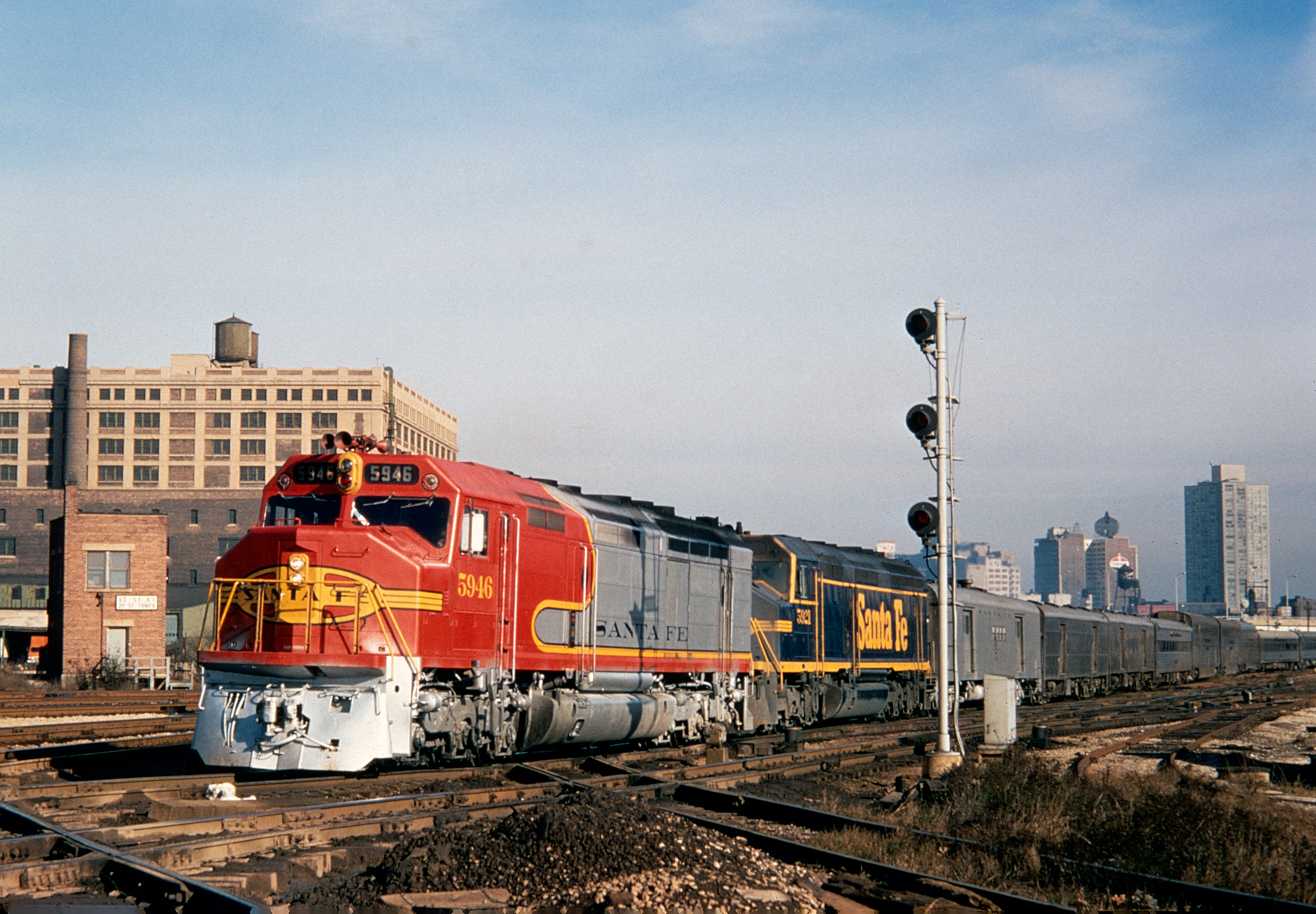 It went on to discuss all of the amenities the train offered along with the unparalleled beauty afforded during the trip.  Two years later in the summer of 1956 the railroad took delivery of more noteworthy equipment.

Known as "Hi-Levels" these double-decked, streamlined cars acted as full-length domes by providing another means of panoramic scenery from high above the train.  These would eventually make their way to the San Francisco. 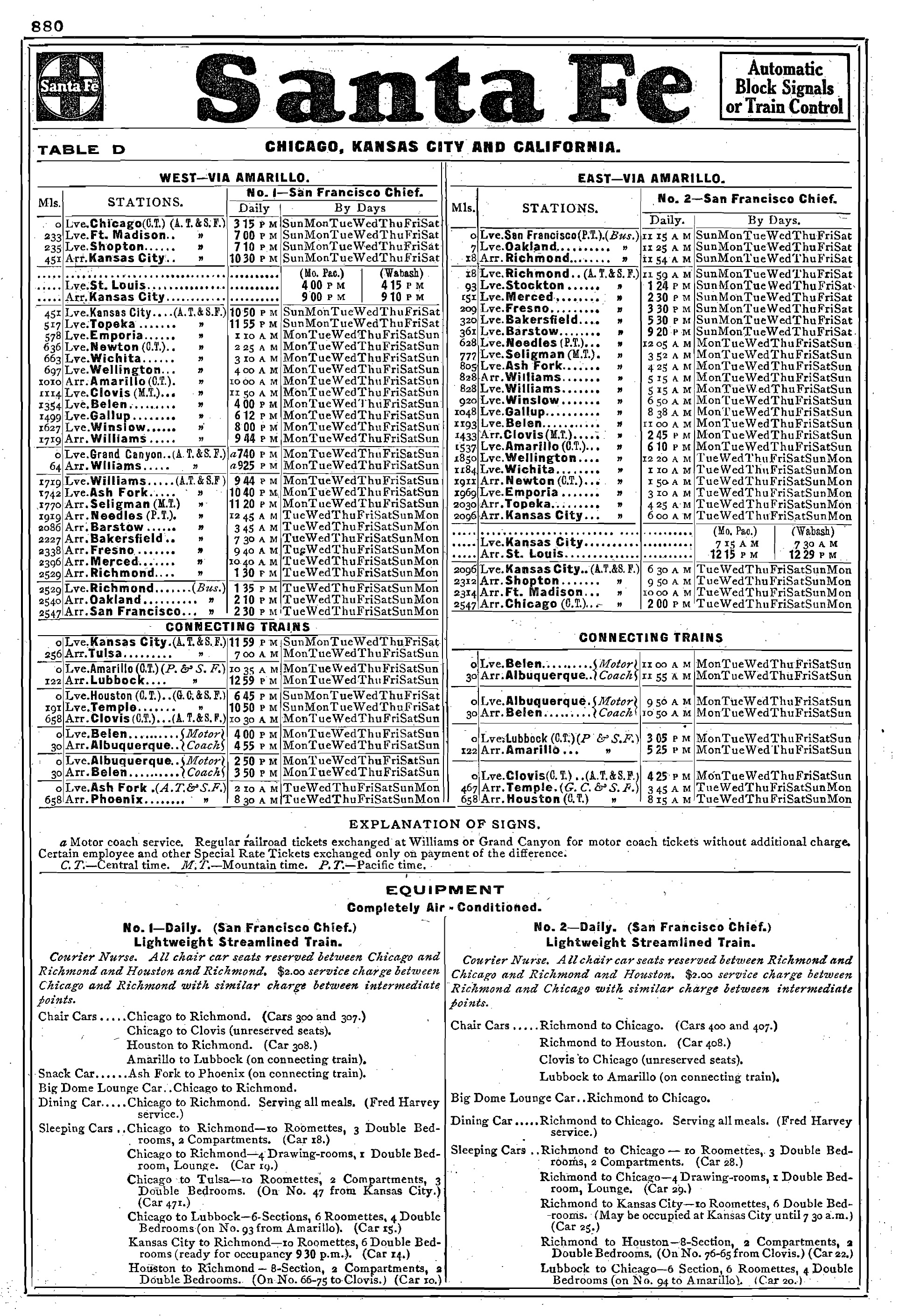 The train was a bit unique from its other Chief (and El Cap) counterparts in that it provided passengers a chance to see different parts of the Santa Fe's system.

Utilizing what was typically reserved for freight trains the San Francisco diverted south from Kansas City serving such location as Wichita (Kansas), Amarillo (Texas), and Clovis (New Mexico) before rejoining the main line west of Albuquerque, New Mexico at Dalies and continuing its journey towards California.

From there the train traveled north from Barstow through the Central and San Joaquin Valley serving Bakersfield and Stockton before terminating at Richmond Station (near Oakland) having completed a journey requiring roughly 2,550 miles. 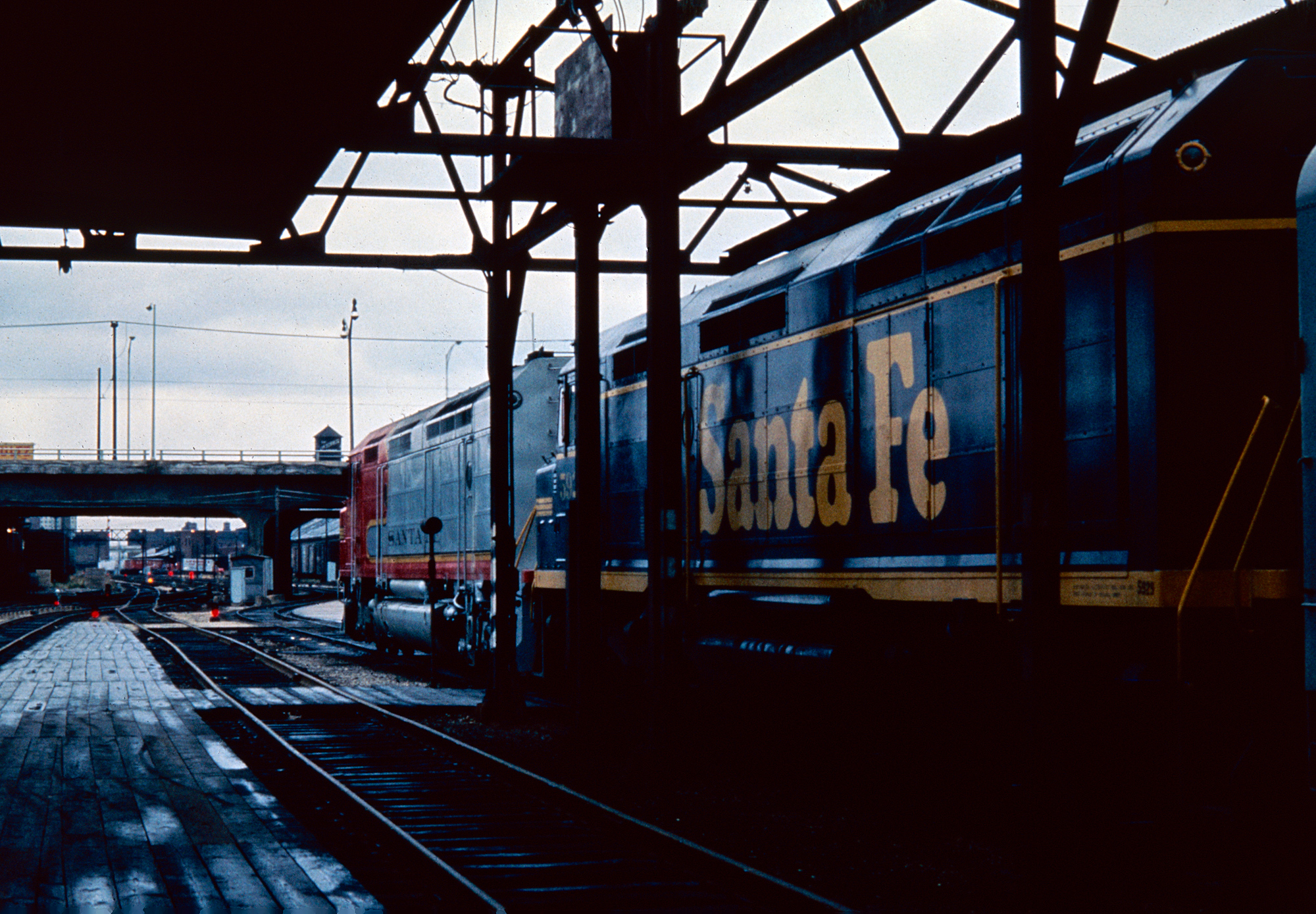 Despite the loss of Pullman service in early 1969 the Santa Fe continued fielding its own sleepers on the San Francisco Chief and the other important long-distance trains that remained on the timetable at that time.

The railroad, of course, was unflinching in its high service standards and the San Francisco continued offering Hi-Levels, a diner, Big Dome lounges, and a trio of sleepers (a pair serving Chicago-Los Angeles while the other ran the entire route) in its final years.

Additionally, while many railroads had abandoned such practices with rapidly declining ridership throughout the 1960s the January, 1970 timetable notes that:

The San Francisco Chief made its final run under the Santa Fe on April 30, 1971.