The little South Branch Valley Railroad (SBVR) is a short line operating on the former Baltimore & Ohio's Petersburg Branch in the Eastern Panhandle of West Virginia with operations headquartered in Moorefield.

To the general public the track is best known for its train rides provided through the Potomac Eagle Scenic Railroad tourist line, which began in 1991.

The state has been an avid proponent of preserving rail service within its borders and this corridor is no different.  It almost certainly would have been abandoned if not for Charleston's efforts to acquire the property.

The SBVR was started in the late 1970s when the Chessie System (predecessor to today’s CSX Transportation) was interested in selling off the line.

Realizing the potential the branch still carried in terms of business as well as its economic impact on the region, West Virginia stepped in and purchased it. The railroad is currently operated by the West Virginia State Rail Authority.

Railfans have come to enjoy the line for its propensity to repaint equipment into predecessor colors and recognize its history.

In addition, there have been a number of photo charters carried out to capture trains as they would have appeared 30, 40, or even 50 years ago (as seen in the attached photos). 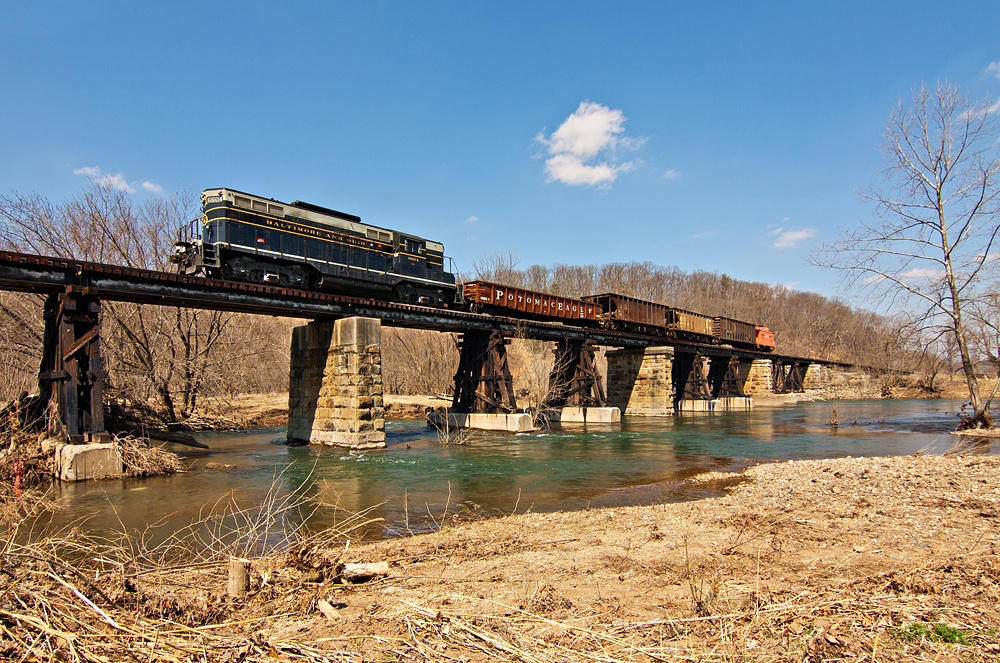 While the South Branch Valley Railroad purchased its trackage directly from the Chessie System, the history of the routes dates back quite a bit further to the Baltimore & Ohio Railroad.

And, even before the B&O took ownership of the line in 1913 an interest to connect Petersburg and Romney with the B&O's main line at Green Spring dates back to February, 1880.

Having been bypassed by the railroad's main line decades earlier which opened between Baltimore and Cumberland in 1842 the towns sought to build their own.

Named the Cumberland, Moorefield & Petersburg Railroad the endeavor failed to get off the ground.  Such projects were expensive then as they are now and with no funding available the charter lay dormant for four years.

A years later a new company, known as the South Branch Railroad, found more success and opened between Green Spring and Romney on September 1, 1884.

Over the next 20 years the railroad reached no further south than the 16 miles completed to Romney, a small town largely known for its agricultural production (apples).

Then, things picked up again in 1909 when construction began south of that point.  Known as the Hampshire Southern Railroad it was led by William B. Cornwell. 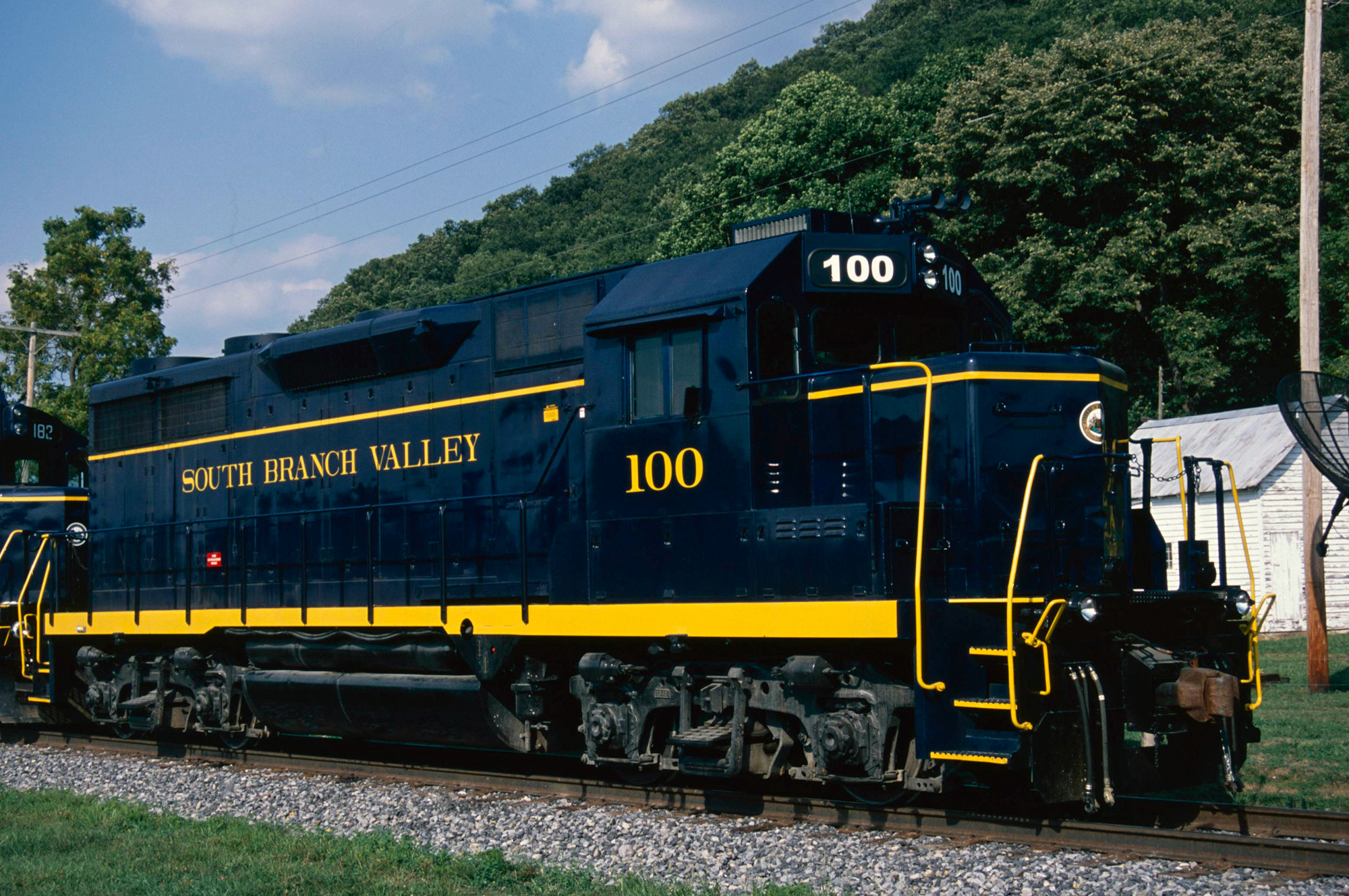 With financial backing available another 25 miles was completed, opening to Moorefield in 1910. The following year the company was sold to the new Moorefield & Virginia Railroad which subsequently completed an additional 12 miles to nearby Petersburg.

If the M&V had ambitions of extending the line beyond this town it is not known.  During this era numerous charters, plans, and routes were drawn up to crisscross the Mountain State.

Most such schemes never made it off paper due to the huge expensive in tackling the Appalachian Mountains.  Ultimately, the M&V sold out to the B&O in November, 1913 which subsequently operated it as the Petersburg Branch. 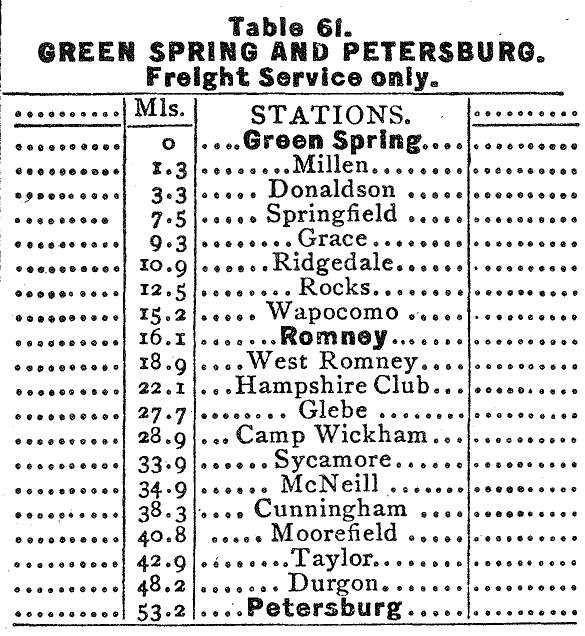 A timetable of Baltimore & Ohio's "Petersburg Branch" from the 1940 Official Guide. Note that Green Spring is the along the B&O's original main line completed to Cumberland, Maryland in late 1842. It later became known as the "East End." Author's collection.

As a small, out-of-way secondary corridor the branch was but a footnote as part of a system stretching some 10,000 miles from New York to Chicago/St. Louis.

Passenger service ceased in 1928 and the line saw little business over the 50 years.  During the 1970's the then-Chessie System was abandoning or siphoning off numerous routes it deemed redundant or unprofitable and the Petersburg Branch met this criteria.

Luckily, following its abandonment, the state of West Virginia stepped in and purchased the corridor, assuming operations on October 11, 1978.

The SBVR is perhaps most famous for the excursion trains that operate over the line (although excursion service on the route did not begin until 1989, more than 10 years since the SBVR had begun operations) it has actually become quite a successful little short line as well.

The railroad predominantly ships grain and chemicals but also is diversified in other traffic ranging from feed to wood products and plastic pellets (in total the railroad sees around 4,000 carloads annually). 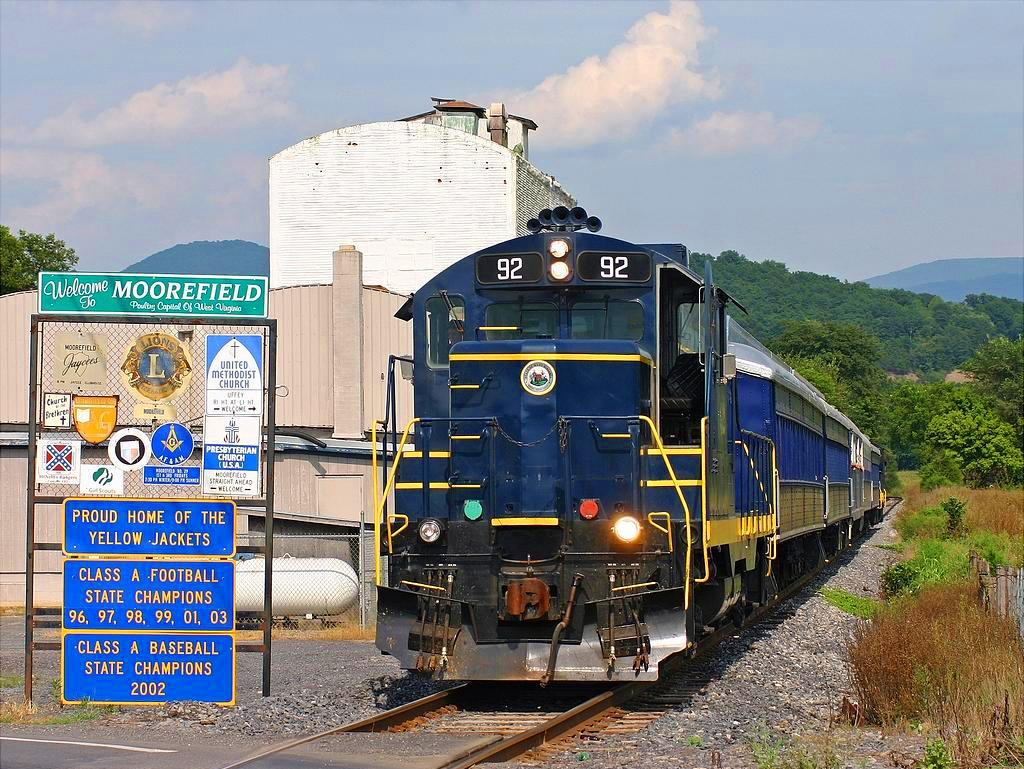 The South Branch Valley Railroad currently rosters a number of Electro-Motive Division Geeps and SDs of various heritage, which totals 12 units in all.

Currently SBVR freight trains are typically operated during the workweek with no service on Saturdays and Sundays. Interestingly, when the state of West Virginia purchased the ex-B&O trackage, in doing so it became the first state to ever own and operate a private, for-profit railroad. 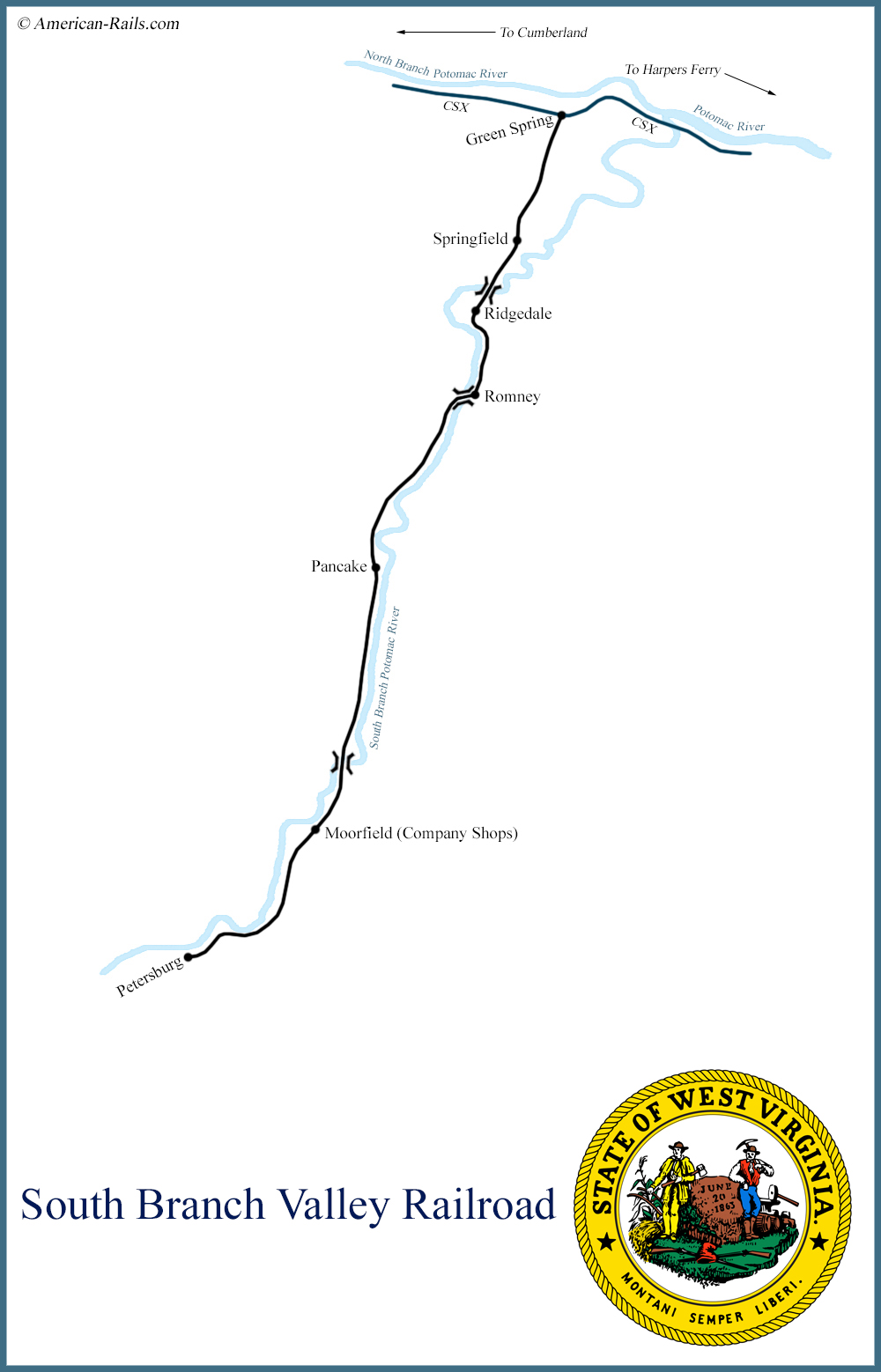 The line has had setbacks since its ownership by the state. Perhaps the worst incident occurred in the fall of 1985 when severe flooding by the South Branch Potomac River in eastern West Virginia destroyed much of the railroad's right-of-way (along with railroads to the south including for the former C&O's line near Durbin and Cass).

It was feared that this flooding would permanently shutdown the line. However, the state elected to rebuild the route and it was reopened in the late 1980s, around the time that excursion trains began plying the line. 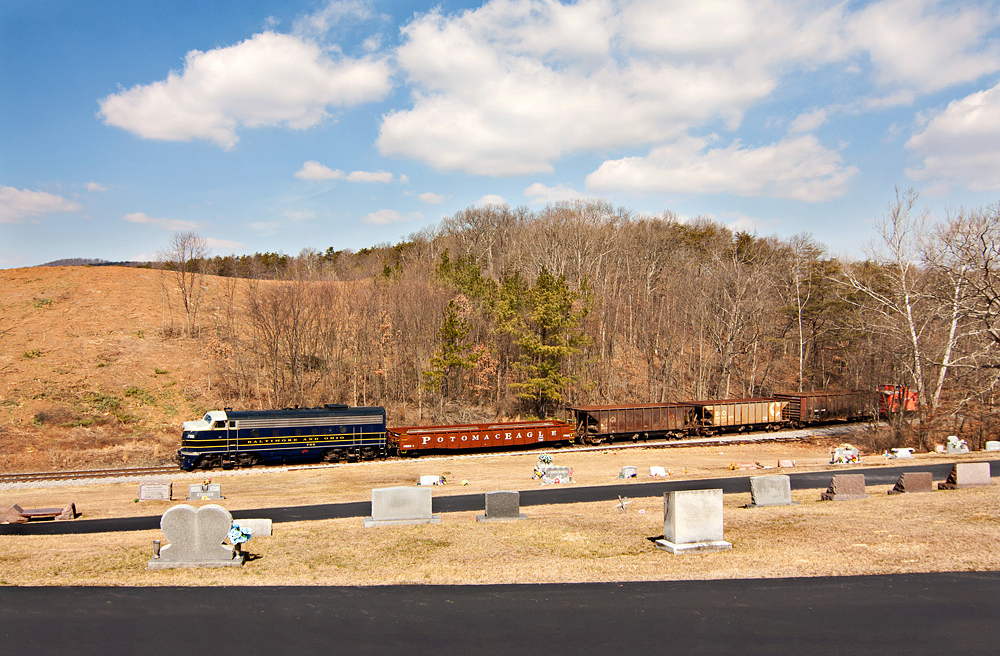 The South Branch Valley Railroad's original locomotive roster included classic Alcos, which unfortunately have long since been sold off and are no longer on the property (some of which have also been scrapped, sadly).

Today, the railroad operates almost entirely all EMD products and it is still fairly interesting seeing SBVR freight trains that are led by Chessie, B&O, and Chesapeake & Ohio-painted locomotives (which are also used in excursion service).

To learn more about the South Branch Valley Railroad's locomotive roster please have a look at the roster above.