The South Carolina Canal and Rail Road Company, also sometimes regarded as the Charleston & Hamburg, was an early railroad established just a few months after the charter of the first common-carrier, the Baltimore & Ohio.

The SCC&RR was an audacious project which looked to connect the major port city of Charleston to inland regions of the Palmetto State, notably its centralized agricultural sector.

The success of the railroad was also thanks to a visionary chief engineer who recognized the importance of the steam locomotive in the movement of people and goods.

Historically, the Charleston & Hamburg is best recognized for being the first to operate a regularly scheduled passenger train pulled by a steam locomotive during late 1830.

After less than two decades of service the SCC&RR disappeared through merger. What remained of it became part of the famous Southern Railway although today little of the original right-of-way remains. 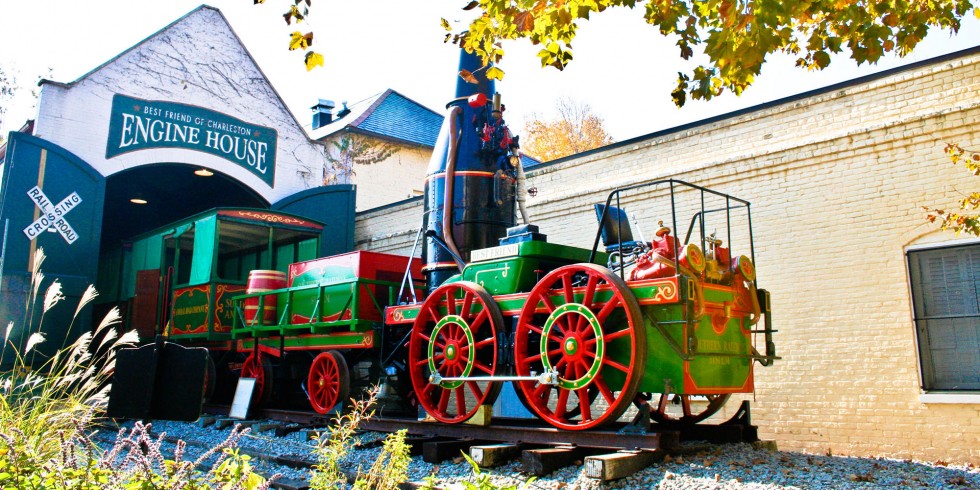 A view of a "Best Friend" replica at the Best Friend of Charleston Museum in Charleston, South Carolina.

By the mid-1820s the concept of railroads was gaining serious headway in the relatively new United States of America.

With the development of the steam locomotive by Richard Trevithick of England who showcased his new invention on February 21, 1804, it was clear that railroads could play a vital role in the faster movement of people and goods.

Some small incline railways and local horse-drawn operations were in service in the Northeast although it was not until the B&O was chartered and organized on April 24th, 1827 was the first, true common-carrier line established in the country.

The B&O was created by Baltimore businessman who wanted to make sure that their city remained a vital port and did not want to be outdone by the newfangled canal systems.

The purpose of the company was to haul agricultural products from inland farms, notably the important cotton crop, to the port city for shipment.

The hope was to connect Hamburg, Columbia, Augusta (Hamburg), and Camden to the west along a route nearly 140 miles in length with a canal spanning the gap between the Savannah and Ashley rivers (hence the "canal" in the name).

Just as with Baltimore, Charleston feared that if it did not take the risk of building a railroad it may wither and be left out in the cold while other east coast ports gained an edge.

The most pertinent reason for this anxiety was the new canal systems that had been proposed, particularly in the northeast and New York City was already connected via the Delaware & Hudson Canal Company.

While the railroad was unproven, Charleston business leaders felt they had no choice but to attempt the project, and quite a project it was.

By the summer of 1830 the SCC&RR had 6 miles of track in service west of its terminal and yard in Charleston, the Camden Depot (now a National Historic Landmark).

The railroad's chief engineer, Horatio Allen, had been to England to test steam locomotives, as well as operate the Stourbridge Lion design being tested on the Delaware & Hudson Canal Company in 1829 (officially, the first such locomotive ever operated in the U.S. but was built in England).

Allen had left the D&H due to its unwillingness to embrace steam power which the young engineer felt was the future of transportation. SCC&RR, as well as Charleston officials, bought into his beliefs and the railroad received its first locomotive in October, 1830 built by the West Point Foundry of Cold Spring, New York (near the NYC). 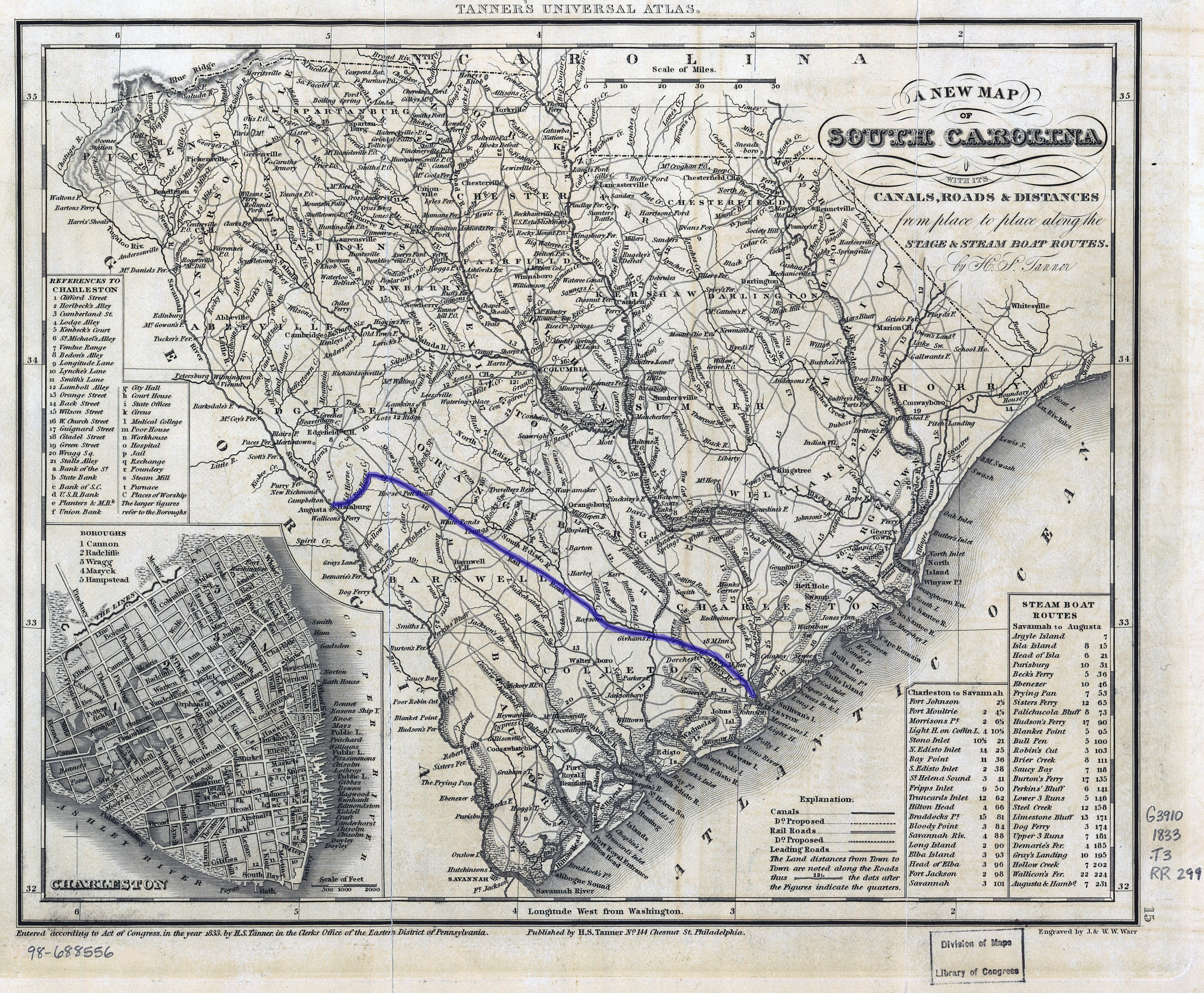 A map of the South Carolina Canal & Rail Road Company (highlighted in blue), circa 1833. Author's collection.

It was christened as the Best Friend of Charleston due to the area it served and was first operated by Allen on Christmas Day, 1830 becoming the first steam locomotive to pull a regularly scheduled passenger train in the United States.

Soon after the SCCRR first 6 miles were opened work quickly commenced on rest of the route. By October, 1833 the entire 136-mile route between Charleston and Hamburg (directly across the Savannah River from Augusta) was open.

It required the work of more than 1,300 contractors and a price tag of $950,000. The route was constructed mostly using strap-iron tracks (literally iron straps bolted to a wooden timbers) that were placed above wooden sills.

However, this quickly proved impractical.  Despite Allen's reputation as an early expert on railroad technology, Dr. George Hilton notes in his book, "American Narrow Gauge Railroads," his theory of wooden trestle-work in place of standard fill proved a disaster.

The wood quickly deteriorated in the intense southern heat and humidity which led to numerous derailments.   Between 1833 and 1839, the SCC&RR spent an additional $463,000 to replace this design with traditional earthen embankments and modern "T"-rail.

When the Charleston & Hamburg was opened it was easily not only the longest railroad in the United States but also the world.

All other lines in use at the time were no more than a few dozen miles in length, as the B&O for instance was only operating about 13 miles of railroad at that point in time.

Two years after opening its entire main line the SCC&RR owned 23 locomotives by 1835. Unfortunately, the line expanded little after completing its initial route save for a branch it built to the capital of Columbia. 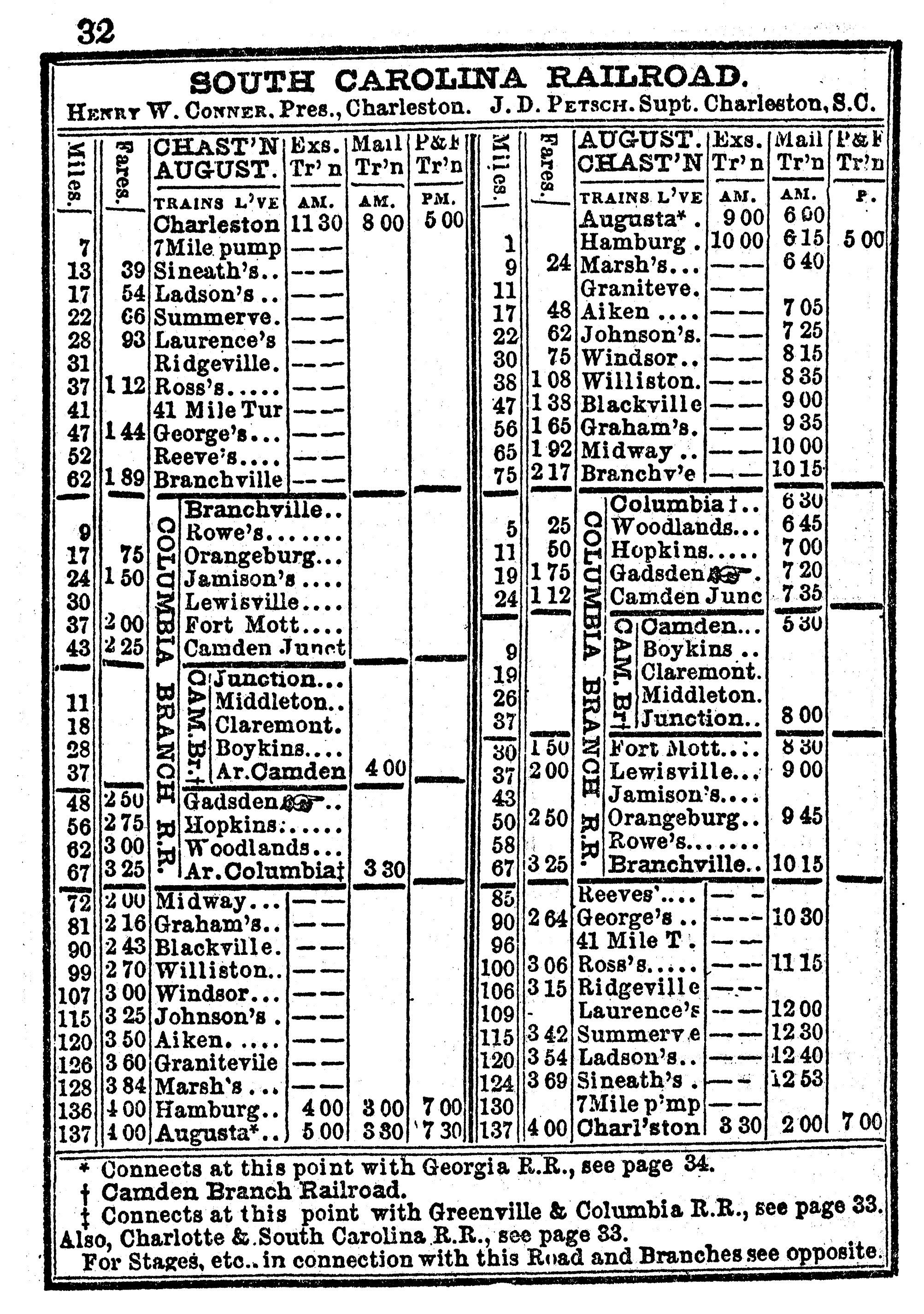 An 1851 timetable of the South Carolina Railroad, from the American Railway Guide (1851). American-Rails.com collection.

While it was profitable it never moved the hundreds of thousands of cotton bushels and other agriculture its builders had intended.

Additionally, it ran into stiff competition with steam boats operating on the Savannah River and Augusta as upset that the railroad never reached across the waterway to directly serve the city (due to this the city chartered several of its own railroads and it became a major hub of rail commerce).

Ironically, Hamburg never even truly embraced the SCCRR. In early 1844 the system merged with the Louisville, Cincinnati & Charleston to form the South Carolina Railroad Company.

The system was later reorganized as the South Carolina Railroad in 1881 after it could not recover from the devastation suffered during the Civil War.

Under its latest name the railroad expanded through the Carolinas but again fell into receivership in 1894, emerging as the South Carolina & Georgia Railroad.

By 1899 the SC&G was acquired by the Southern Railway and became part of its Piedmont Division. Today, little of the original SC&RR right-of-way remains in use although the roadbed can still be easily seen in several locations, even through towns that sprang up along the line if one knows were to look.

Also, the city of Charleston has many markers showcasing where the original tracks were located (and where the Best Friend was operated) as well as the aforementioned Camden Depot.