If it was not for the Santa Cruz & Monterey Bay Railway, formerly a division of Ed Ellis's Iowa Pacific Railway conglomerate (which operated several short lines across the country), the former Southern Pacific's Santa Cruz Branch may have been abandoned.

The history of this very scenic route, skirting the Pacific Coast northward from Watsonville, California along the Monterey Bay dates back to the late 19th century.

The SC&MB provided freight and passenger service on the route.  Today, it is known as the St. Paul & Pacific Railroad, a division of Progressive Rail, Inc. 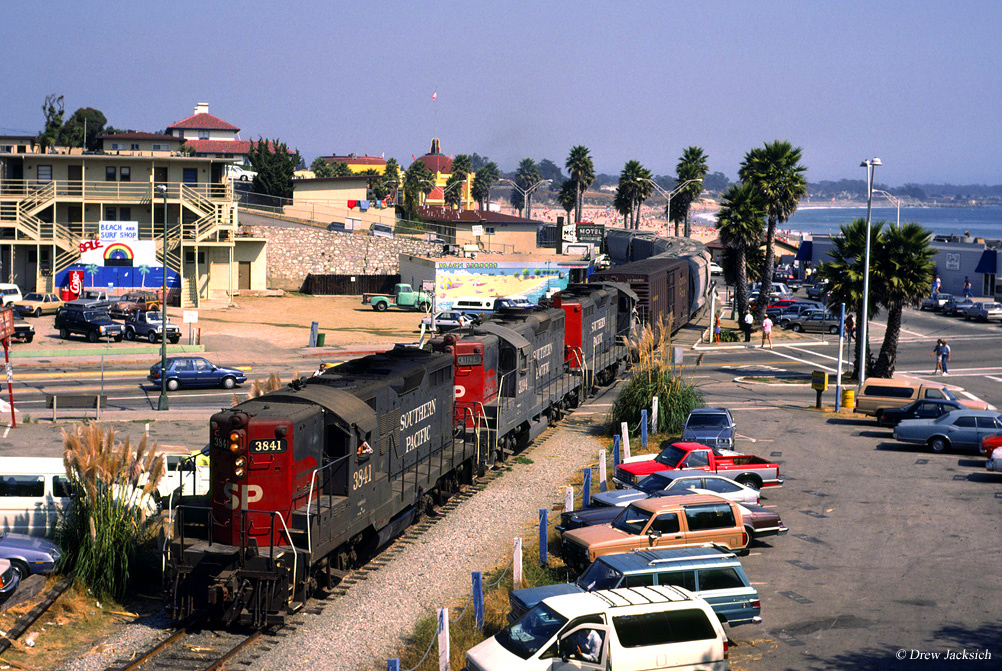 During the late Southern Pacific era a trio of GP9's roll along Beach Street in Santa Cruz, California with the Santa Cruz Local headed for the nearby yard during September of 1987. Drew Jacksich photo.

The route previously operated by the Santa Cruz & Monterey Bay Railway has a history tracing to the 1880s.

With the completion of the Transcontinental Railroad in the spring of 1869 and the growth of the Southern Pacific, California's railroad network expanded rapidly during the last three decades of the 19th century.

Systems both large and small sprung up to serve growing cities, the state's rich agricultural regions, and abundant natural resources.

There were two railroads primarily comprising what is now operated by the Santa Cruz & Monterey Bay;:

The first built was the Santa Cruz Railroad (SCRR), originally organized in June of 1873 by a group of businessmen from Santa Cruz, led by Claus Spreckels and FA Hihn, with hopes of extending a line southward to a connection with the Southern Pacific near Watsonville.

The town of Santa Cruz and local county had initially attempted to lure Southern Pacific into building its main line connecting San Francisco with Los Angeles through their community but unfortunately the growing railroad elected to move its route further east.

Undeterred by this setback community leaders set about building their own railroad.

To fund the project county monies were used along the private investment and to keep costs down the SCRR was built to a three-foot, "narrow-gauge" right-of-way. 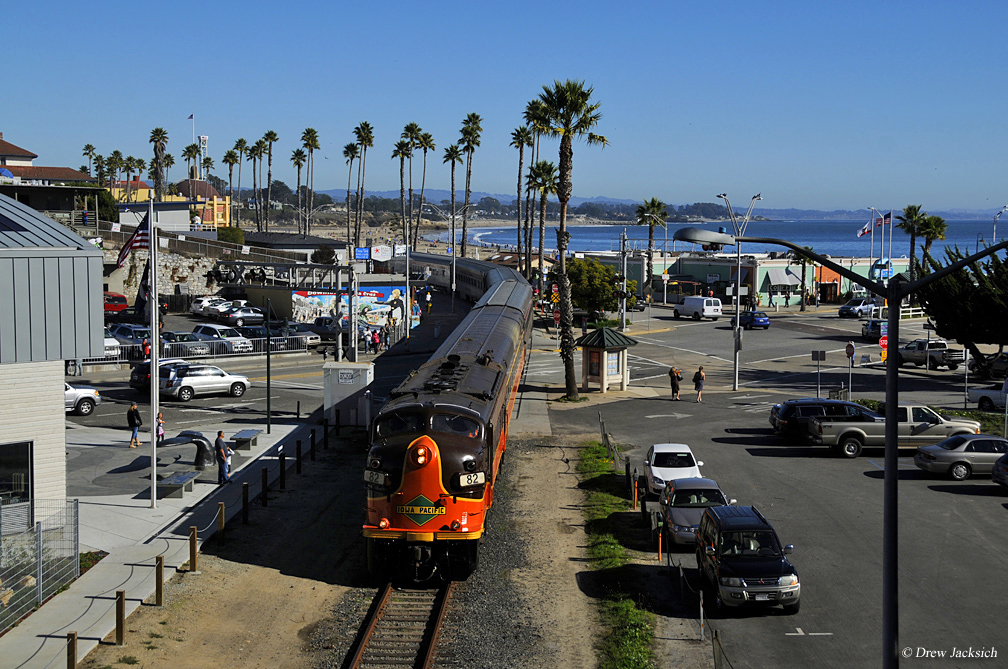 Santa Cruz & Monterey Bay covered wagons, led by F9A #82, head through Santa Cruz during the early days of service for the new short line in November of 2012. Drew Jacksich photo.

Construction began during December of 1873 and used predominantly Chinese immigrants for manual labor.  The route largely stayed near the northern coast of Monterey Bay passing through small towns such as Capitola, Aptos, and La Selva Beach.

It took a year to open the first 5 miles east of Santa Cruz during December of 1874.

After another year and legal wrangling the SCRR was finally completed to Watsonville where a connection was made at location known as Pajaro (slightly south of Watsonville).

The railroad largely relied on agricultural products and was fairly successful.

However, severe flooding in early 1881 severely damaged the trestle over the San Lorenzo River and forced the SCRR into bankruptcy after which time it was acquired by Southern Pacific that October.

A few years later in 1887 the SP acquired an inside gateway to the Bay Area by purchasing he South Pacific Coast Railroad, another 3-foot, narrow-gauge line that reached Oakland via San Jose.

Under SP both lines were converted to standard-gauge (4 feet, 8 1/2 inches) for more efficient operation within the rest of its network.

Alas, the original South Pacific Coast, which became profitable as a competitor against SP handling agriculture, timber-based products, other freight, and passengers survived as a through route until only 1940.

That year, strong winter storms in the Santa Cruz Mountains damaged the property beyond repair and it was abandoned between Felton and Los Gatos (the segment from Los Gratos to San Jose survived until 1955 when it, too, was abandoned). 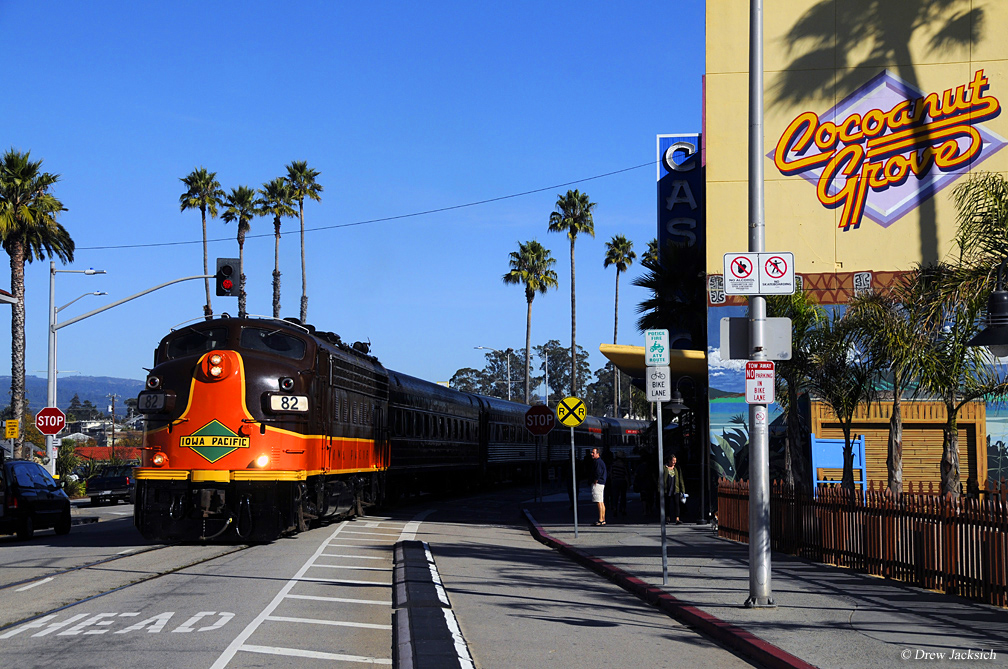 Finally, the line north of Santa Cruz to Davenport was built in the early 20th century by a system originally known as the Ocean Shore Electric Railway.

Construction began in 1905 on the northern and southern ends at Santa Cruz and the Bay Area with a projected completion date by February 1, 1907.

Unfortunately, the Great San Francisco Earthquake of April 18, 1906 damaged the railroad and financially ruined its backers.

The route was never finished running between only San Francisco and Tunitas Creek in the north and Santa Cruz to Swanton (just north of Davenport) in the south.

Despite this setback the system managed to survive for a few years and subsisted on moving agriculture in the north and lumber products in the south.

Unfortunately, lack of traffic, competition, and disagreements with the Southern Pacific forced the little road into bankruptcy in 1910.

It was reorganized as the Ocean Shore Railroad but operated for only another decade before the new owners gave up entirely in 1921.

The Southern Pacific acquired the southern segment, while a section of the northern end was purchased by the large Western Pacific.

The line to Davenport/Swanton saw service throughout the years under SP, as did the old Santa Cruz Railroad, and the former South Coast Pacific as far north as Felton.

In 1996 Southern Pacific was swallowed up by Union Pacific, which later attempted to shed the Santa Cruz Branch from its system.

In addition, SC&MB launched public excursions, such as the "Train To Christmas Town" during the holidays. 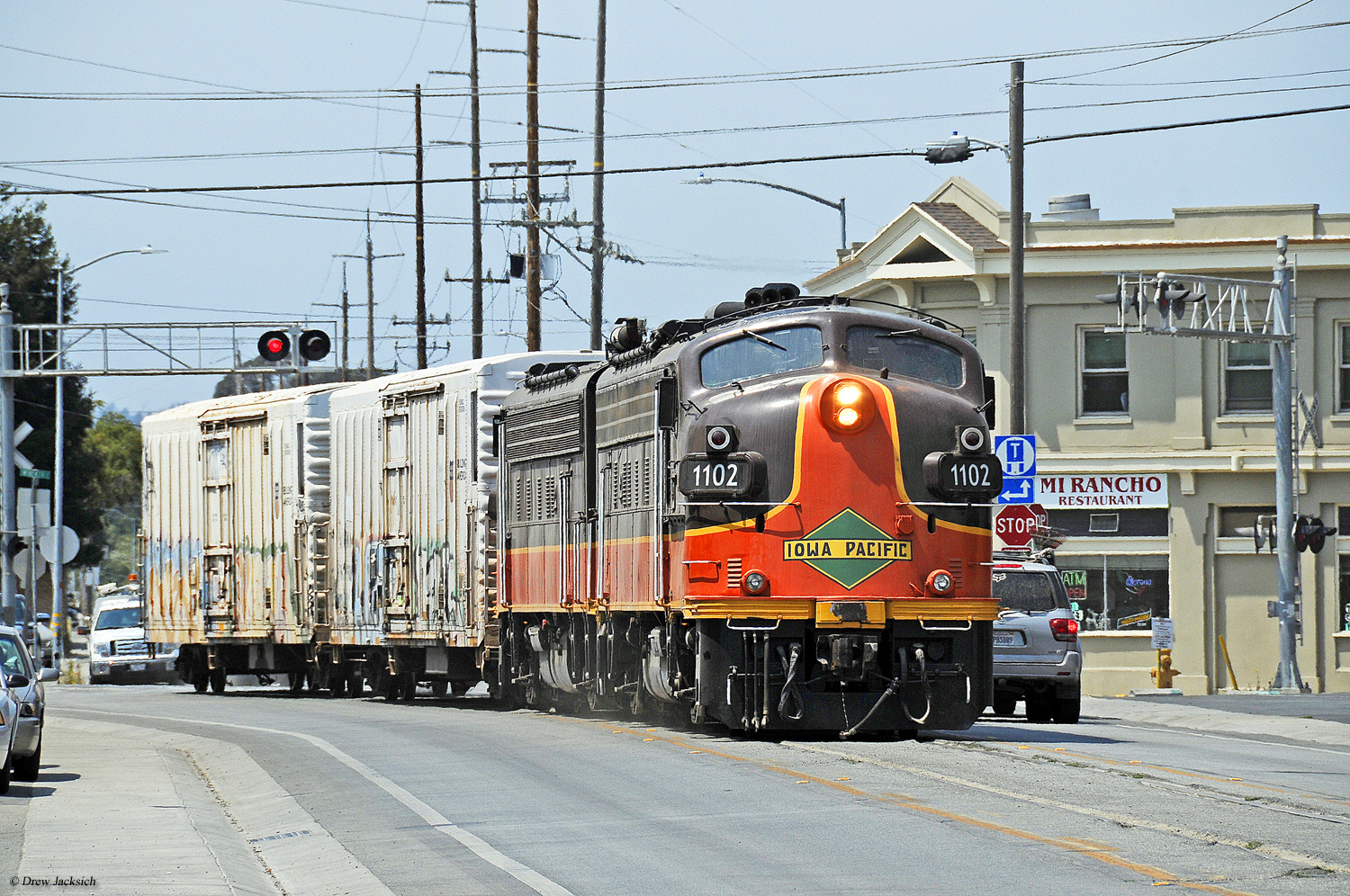 A pair of Santa Cruz & Monterey Bay covered wagons slowly roll down Walker Street in Watsonville, California with two loads of reefers on August 6, 2014. The train is headed for the interchange with Union Pacific at Pajaro. Drew Jacksich photo.

Alas, the big dreams of this operation, and all of Ed Ellis' properties, proved short-lived.

Ellis founded Iowa Pacific in 2001 and by 2015 had grown into a substantial operations that included eight short lines in the United States and two in Great Britain.

His other services included rail travel, car storage, car repairs, car leasing, and property development.  Unfortunately, the company overextended itself and with mounting debt was forced into bankruptcy.

By 2020, its rail properties and equipment were sold off to meet its creditor obligations.  Today, the former Santa Cruz & Monterey Bay Railway is operated by Progressive Rail, Inc. as the St. Paul & Pacific Railroad.  Passenger excursions were not resumed.