The South Carolina Central Railroad (SCRF), a Genesee & Wyoming property, is a small short line that is headquartered in Darlington, South Carolina on original Atlantic Coast Line and Seaboard Air Line trackage with a system that now stretches 51 miles in length.

The history of these lines dates back more than 100 years and in some ways it is perhaps surprising they survived at all after the turbulent years of the 1970s and 1980s.

Presently, the SCRF's interchange point is at Florence with CSX.  Unfortunately, despite numerous lines once radiating into and out of the region many (all of ACL or SAL ancestry) have been abandoned.

The South Carolina Central does not have an extensive customer base but does have a diverse traffic base. Due to the significant amount of traffic the railroad now handles the future of this short line looks very promising.

History, the South Carolina Central was not always a G&W property; its heritage can be traced back to the late 1980's to a now-defunct short line conglomerate, RailTex.

This company emerged on the scene in 1977 and grew into one of the largest such companies of its day.  It was eventually sold to RailAmerica on February 4, 2000.  RA, of course, would go on to join Genesee & Wyoming in 2012. 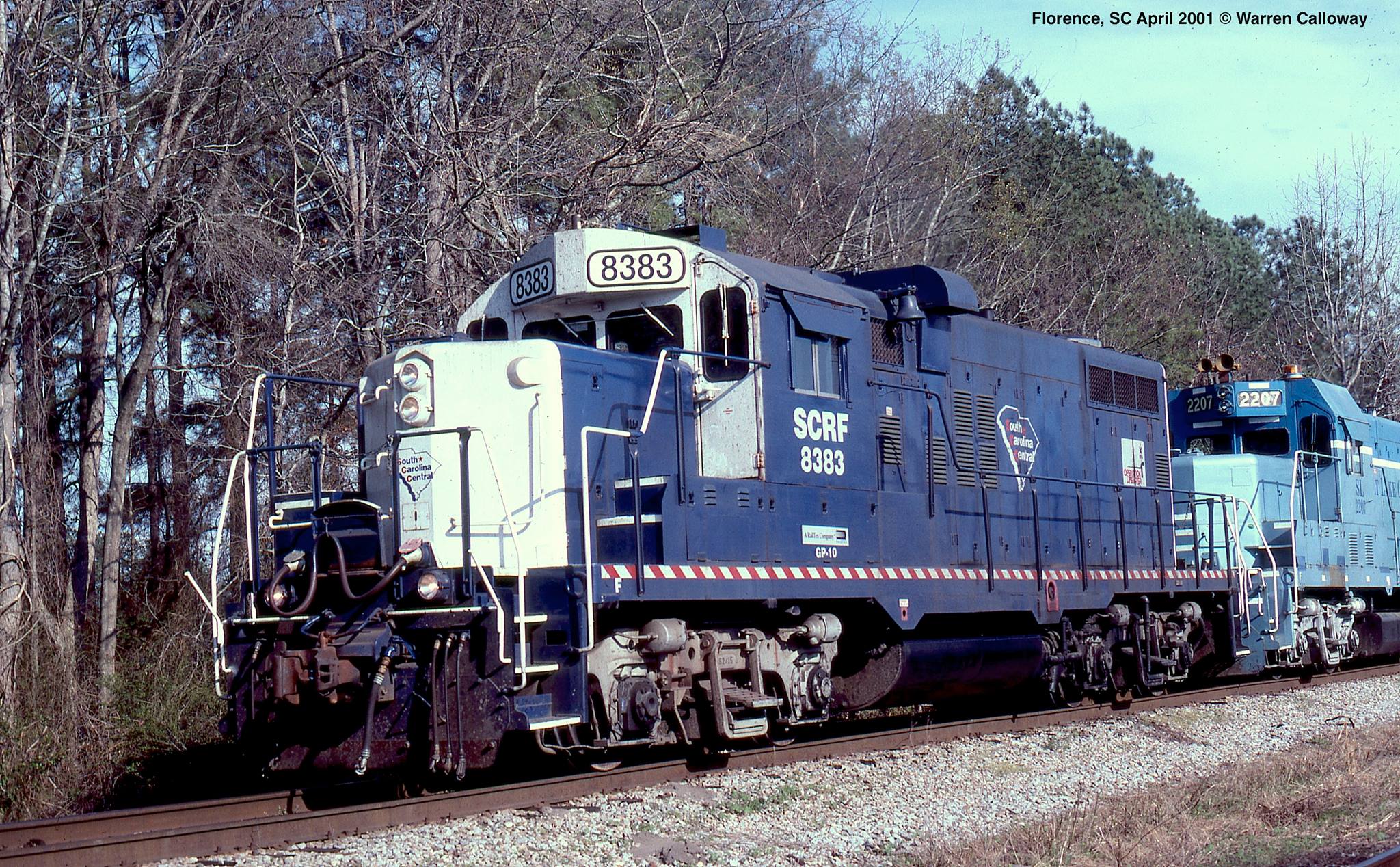 The South Carolina Central Railroad dates back to 1987 when CSX Transportation was interested in shedding low-density branch lines all across its system massive eastern system.

The company was founded by Bruce Flohr who was originally only in leasing railcars.  While this business was profitable he looked to widen his revenue stream and launched the small San Diego & Imperial Valley Railroad on March 8, 1984 (still in service under Genesee & Wyoming).

This new operation worked out an agreement with the Metropolitan Transit Development Board of San Diego to provide freight service over its San Diego & Arizona Eastern Railway. 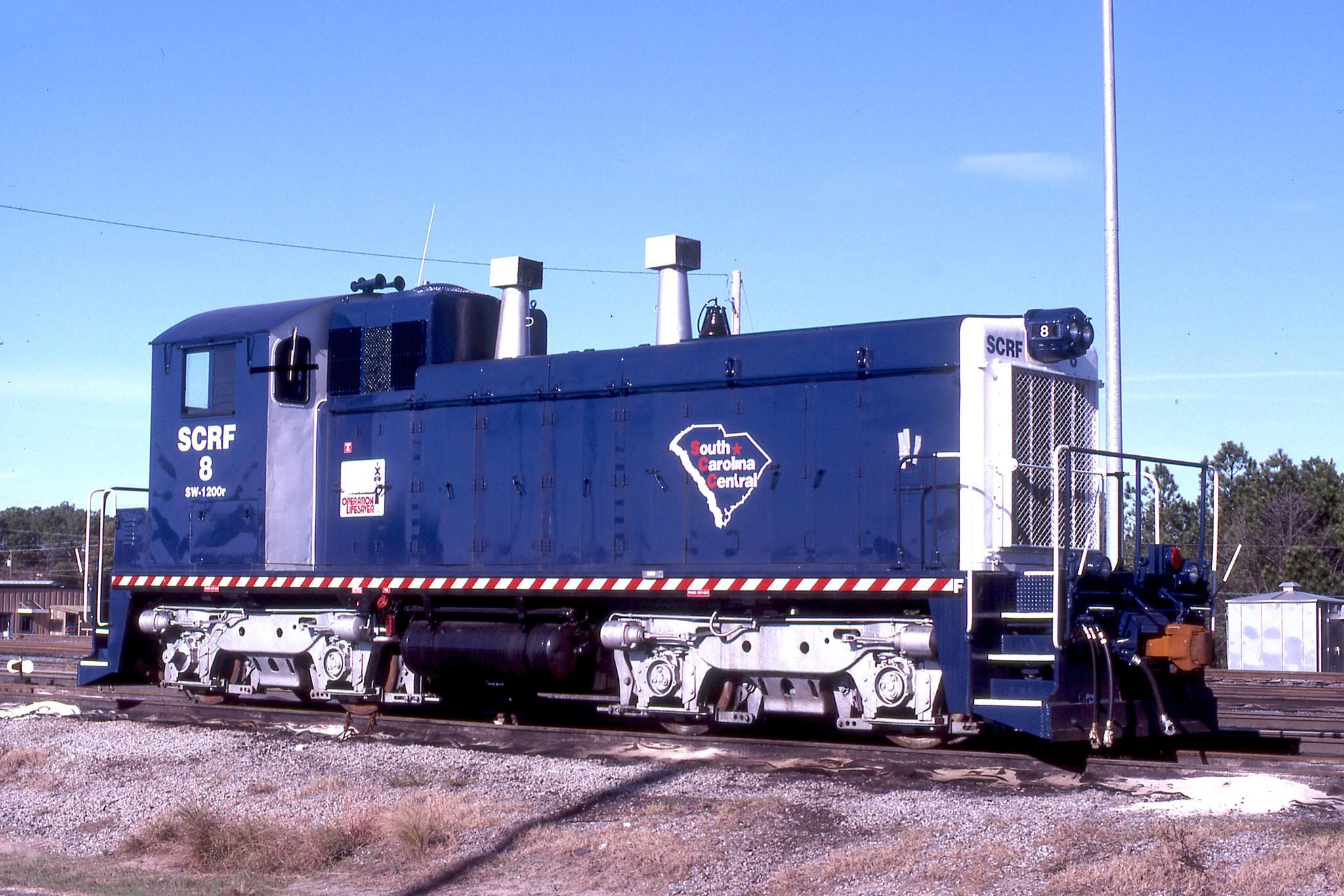 One of the South Carolina Central's few switchers, SW1200r #8, is seen here in Hamlet, North Carolina during April of 1998. Warren Calloway photo.

This tactic proved very successful; when RailAmerica acquired the company it owned 26 railroads that totaled more than 4,100 route miles.

The modern short line movement continues to employ many of Flohr's practices today. The South Carolina Central's track is located in the northern part of the state and consists of two primary lines; one between Society Hill and Cheraw, and another much larger line between Florence and Bishopville.

The shorter section of track was the oldest constructed, dating back to the Cheraw & Darlington Railroad. The C&D was chartered in 1849 to connect its namesake cities and with strong financial backing had completed its main line between the two towns by 1853.

The company was severely damaged by the Civil War although a few years after the war had ended it rebuilt its entire line and extended it as far south as Florence, giving it a system covering 38.4 miles according to a later Seaboard Coast Line timetable.

By 1892 the railroad had reached Wadesboro, North Carolina after it acquired the Cheraw & Salisbury Railroad.  This gave the C&D a line stretching exactly 63.0 miles and by 1898 it came under the control of the Atlantic Coast Line Railroad. 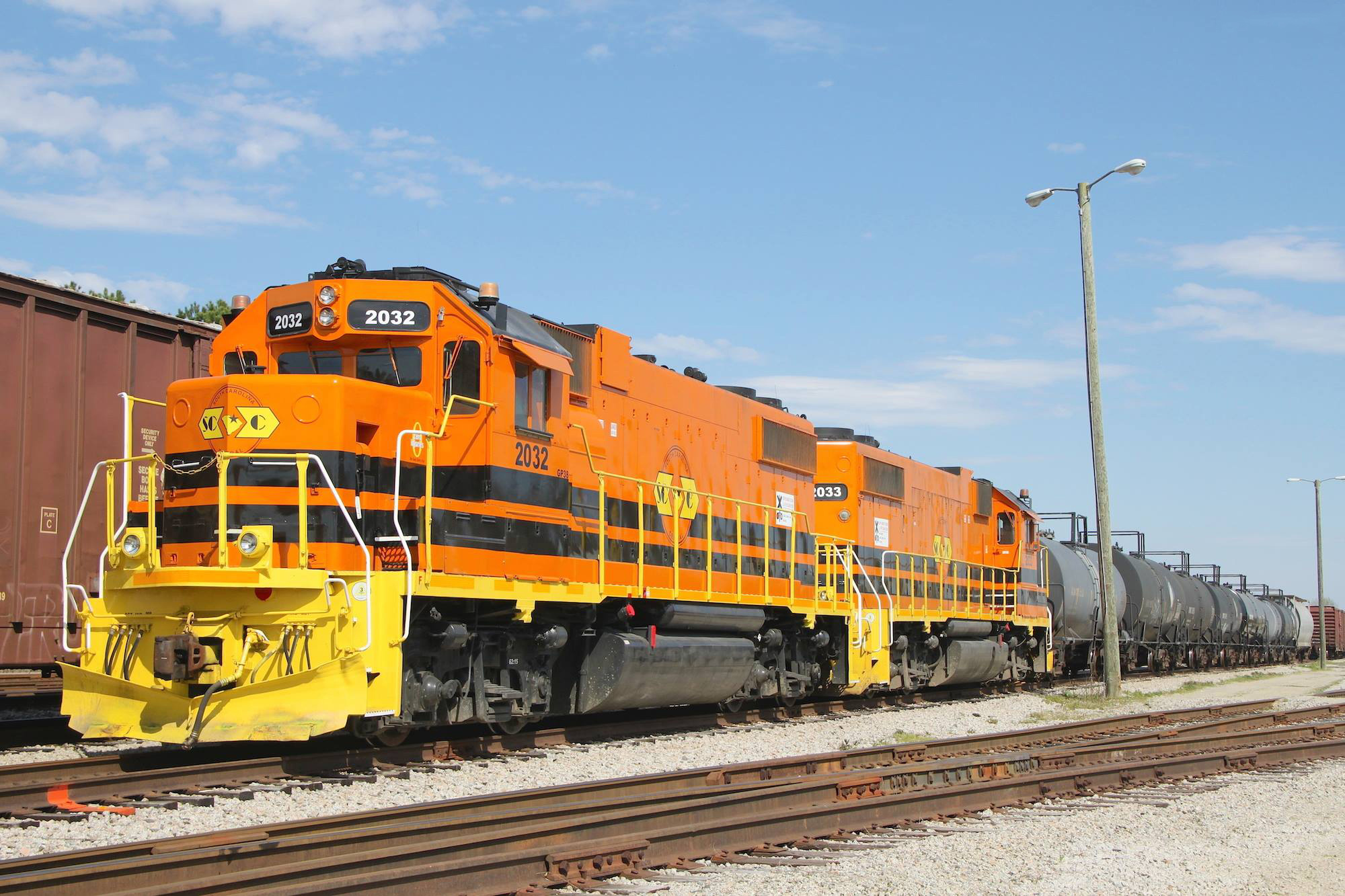 After the ACL had merged with the Seaboard Air Line the entire line between Florence and Wadesboro remained in operation although it was later abandoned between Floyd and Society Hill (a section of line totaling 11.7 miles in length), and between Wadesboro and Cheraw (this section totaled 24.6 miles in length).

As for the second, larger section of track it also has components of original ACL trackage, with the rest former SAL property.

The C&D purchased the railroad in 1895 before, again, it came under the control of the ACL a few years later. 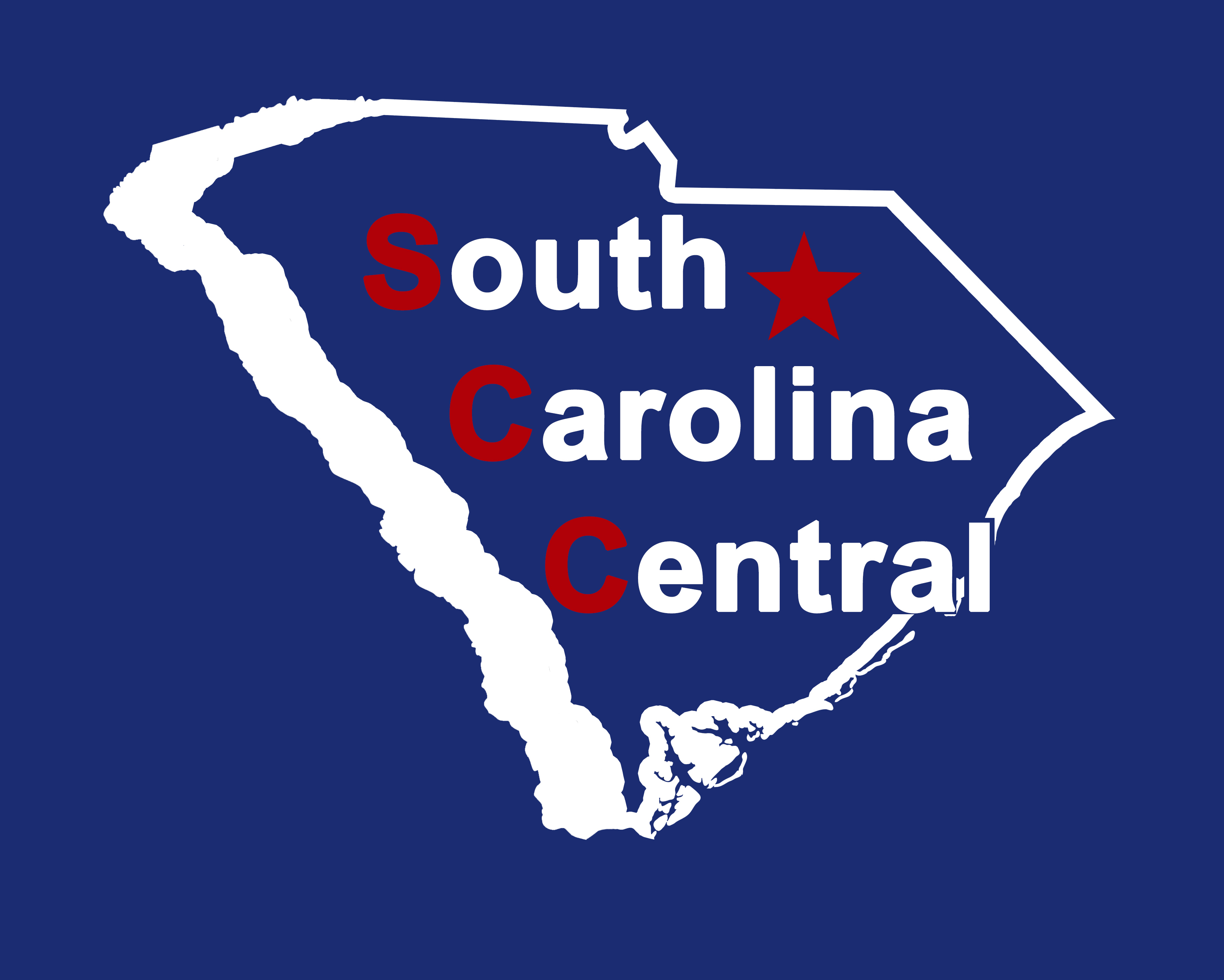 Finally, the only section of original SAL trackage runs between Bishopville and Hartsville and totals exactly 16.7 miles in length according to the SAL's official timetable.

When CSX Corporation was formed in 1980 the new company slowly integrated the new railroads part of the merger, a process not completed until CSX Transportation was born in 1987. 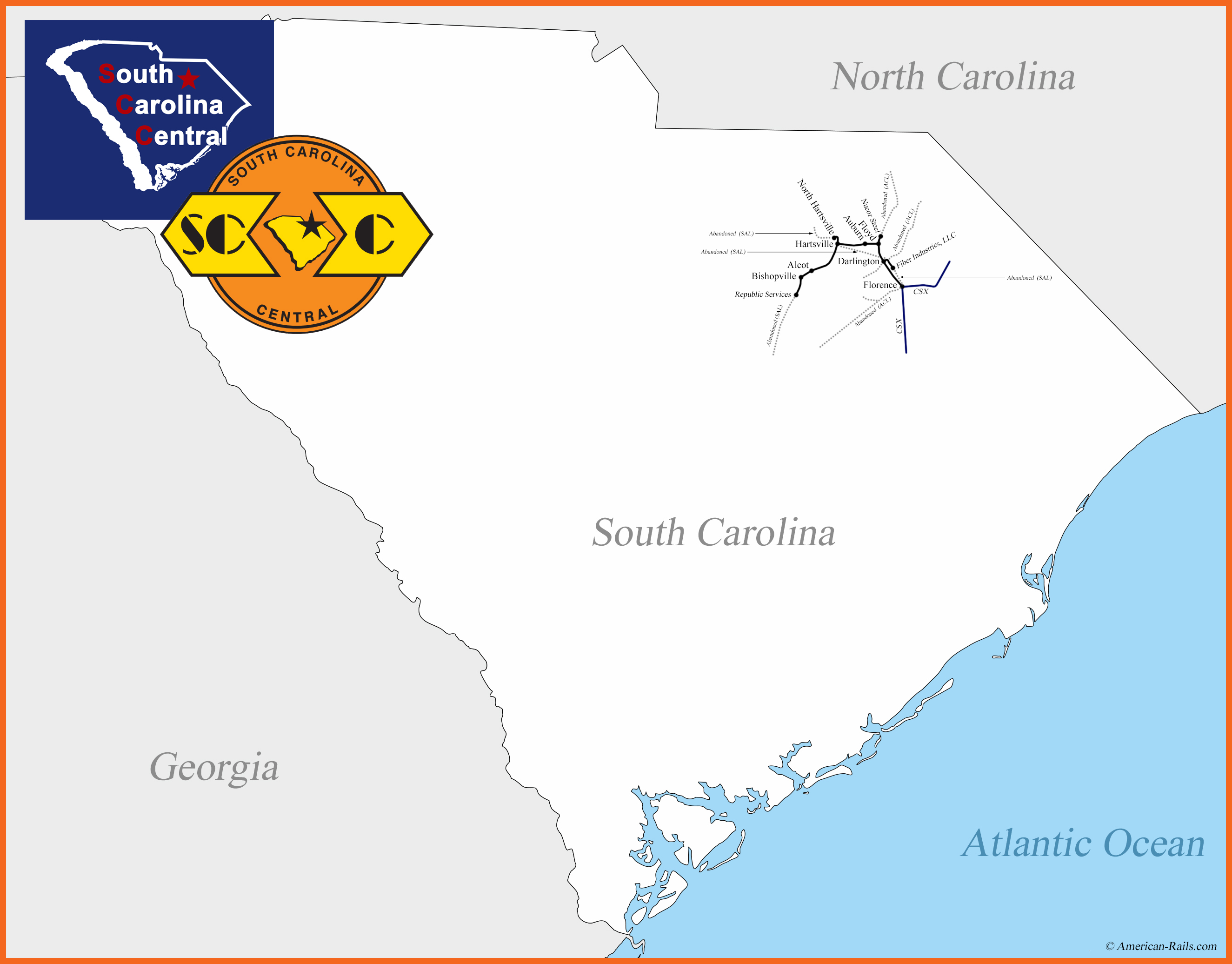 The entirety of the company's southern network was comprised of the former Seaboard System lines, which included the old Atlantic Coast Line and Seaboard Air Line properties.

CSX was quick to shed corridors it deemed superfluous or poorly performing.  This was not isolated to the conglomerate's southern lines; significant portions of the former Baltimore & Ohio as well as sections of the Chesapeake & Ohio were either sold or abandoned.

The properties now comprising the SCRF were always secondary lines and quickly discarded under CSX. 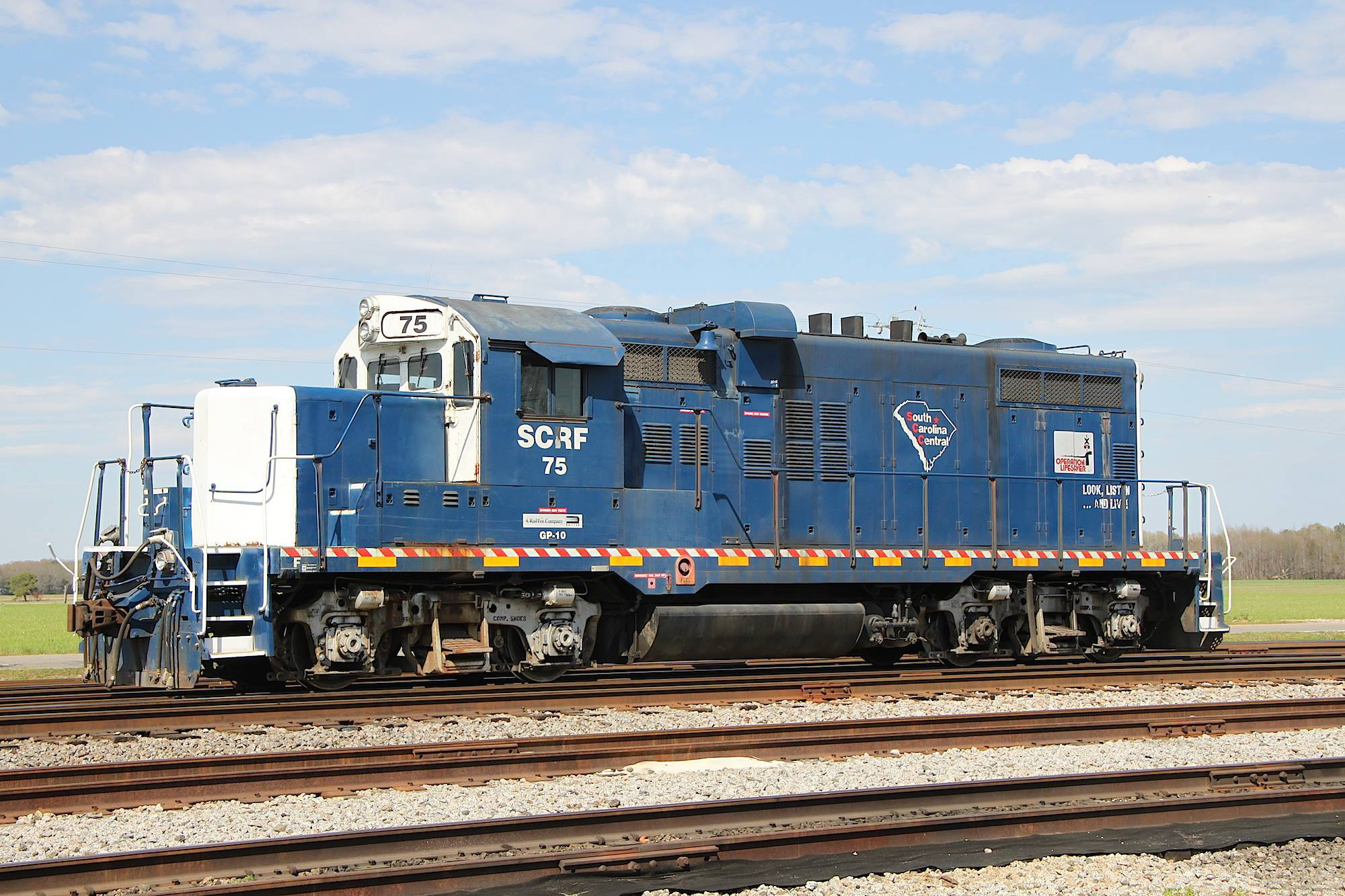 In all, after the abandonments the South Carolina Central operates a system stretching 51 miles in length today (its system offers more than 120 miles of active railroad although I can only guess that this includes all sidings and spurs).

In any event, after operating the SCRF for 13 years RailTex was purchased by RailAmerica, Inc. (itself an operator of numerous short lines) in February of 2000 giving it a handful of new railroads.

The road again changed hands in July of 2012 when Genesee & Wyoming bought out RailAmerica.  Today, the company's classic blue and white livery with the state logo continues to disappear as locomotives are repainted into G&W's ubiquitous orange.

Its future appears strong although changing market conditions can always affect smaller roads like the SCRF.  Its primary traffic base currently includes steel, chemicals, trash, plastics, and some agriculture.