The Electro-Motive Division's SD40 and SD40-2 have become icons, even in their own time!

So successful was the series that one can still spot them regularly today, more than 40 years after the last SD40-2 rolled off of the assembly line.

The only other EMD models that were as successful were the first-generation, four-axle GP7 and GP9.

When the company first released the SD40 in 1966 railroads were not only seeing the economical advantage gained with six-axle locomotives but also understood that more powerful diesels meant fewer units need per train, thus operating costs decreased.

The later SD40-2 was part of EMD's new "Dash 2" line and sparked a firestorm of sales that kept it in production nearly 15 years. While there are a few SD40s officially preserved so many remain in use that there is little need to visit a museum to see one; simply go trackside and wait for one to pass by! 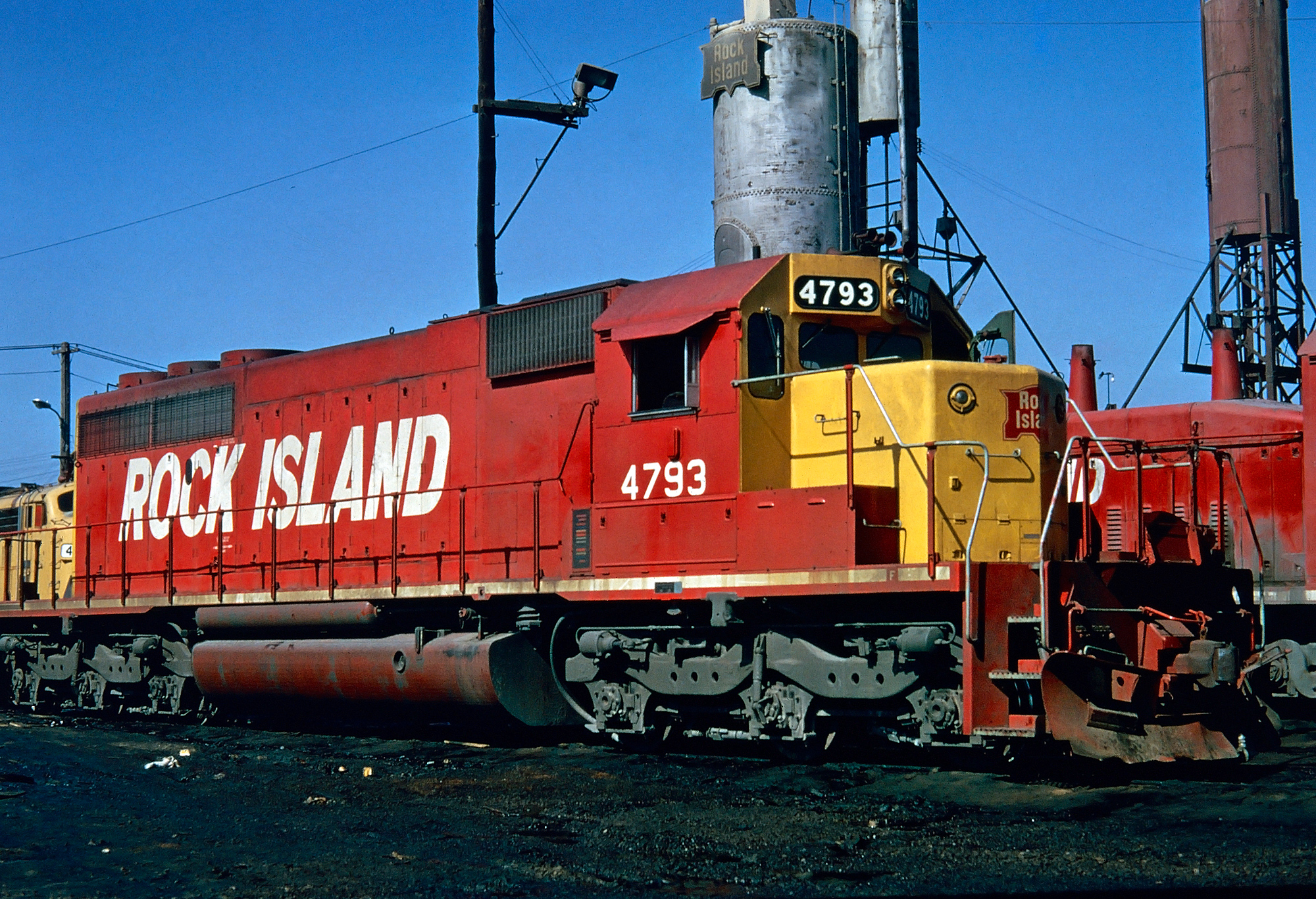 Rock Island SD40-2 #4793 lays over at the engine terminal in Kansas City with other power, circa 1975. American-Rails.com collection.

No other second-generation locomotive could compare to the SD40 series; the two models (SD40 and SD40-2) became the face of EMD and what the locomotive builder stood for and represented.

The model also became the standard of the industry during their time in production.  Their redundancy and rugged continues to make the SD40 series popular today with some still roaming Class I systems into the 2020's.

In many ways, the SD40 was the final curtain all for Electro-Motive as by the very late 1980s GE overtook the company as leader of locomotive manufacturing and continues to hold that title even today. 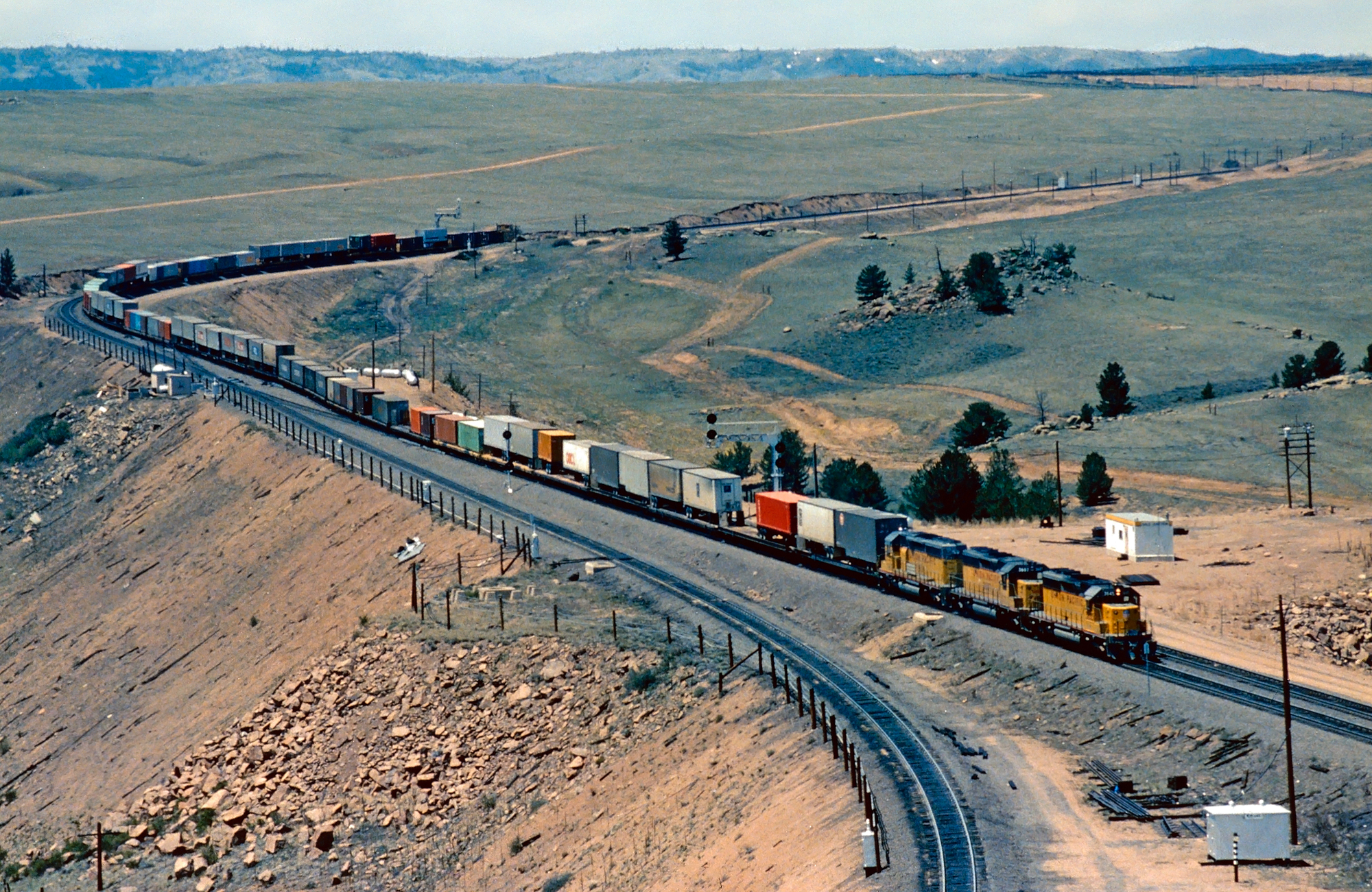 When the series debuted it was just what railroads were after. Looking for a more powerful, reliable and gritty locomotive that could be counted on to work properly in almost any type of weather conditions the SD40 and SD40-2 were it.

Extremely reliable the prime mover was loved by maintenance and shop crews and even many engineers have said the locomotive itself is a joy to operate as it experiences very little problems when in service. 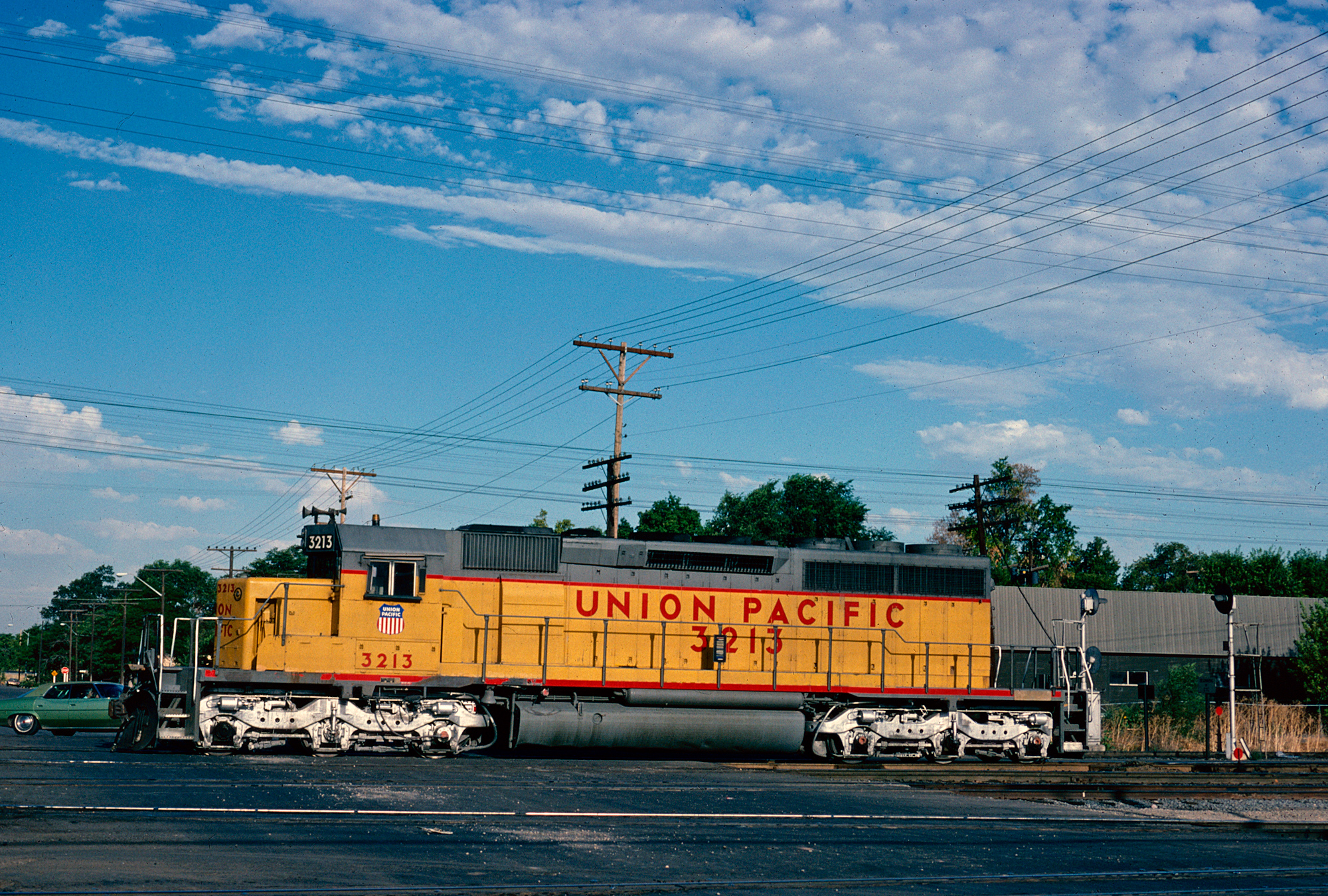 The later SD40-2 released in January, 1972 offered the same tractive effort ratings. Perhaps the biggest external difference between the SD40 and SD40-2 was the frame itself.

The SD40 has a length of 65 feet, 9 inches whereas the SD40-2’s 68 foot, 10 inch frame is clearly noticeable with protruding platforms on the front and rear of the locomotive (sometimes called “porches”).

While the SD40 is considered very successful itself what made the SD40-2 the best selling locomotive of the second-generation class was its additional upgraded features, which included things like electronics, an oblong water-level sight glass and bolted battery boxes just to name a few. 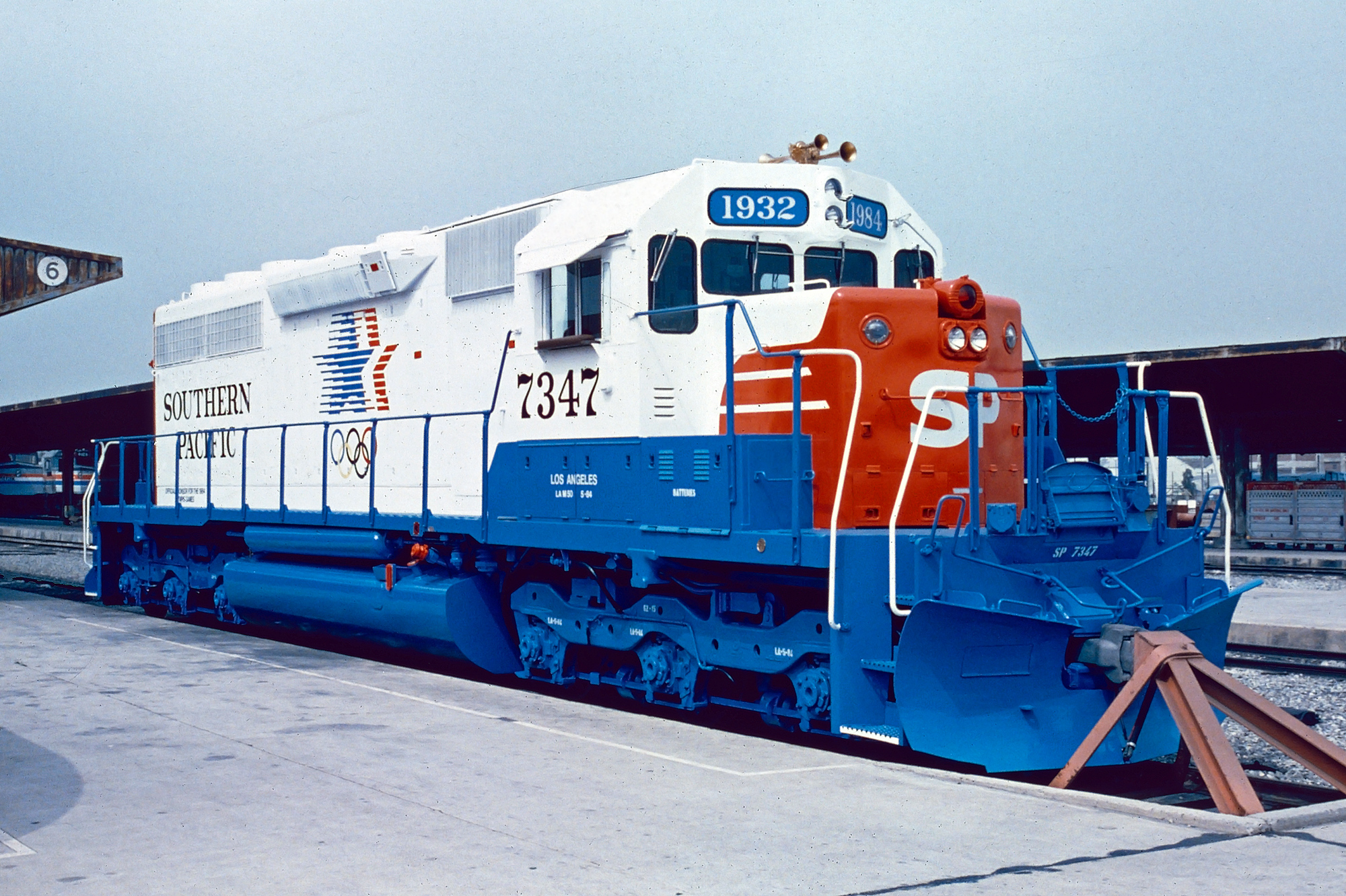 The purpose behind the extra length of the SD40-2 was actually in regards only to the trucks.

As part of EMD's new "Dash 2" line the model not only included new features such as a new type of traction motor blower duct, a modular electronic cabinet system, and bolted battery box access doors but also offered the new HT-C truck.

This truck had been developed by the company in 1970 and replaced the previous Flexicoil design.

Its added length required the frame to be longer on each end, thus the creation of the "porches". In essence the new HT-C truck offered by shock absorbers to improve the ride and wear of the axles and traction motors as well as introduced a better way to house the motors themselves.

Interestingly, when Conrail ordered there SD40-2s, and even SD50s, they asked the units be equipped with the older Flexicoil due to issues with the HT-C that were later dispelled. 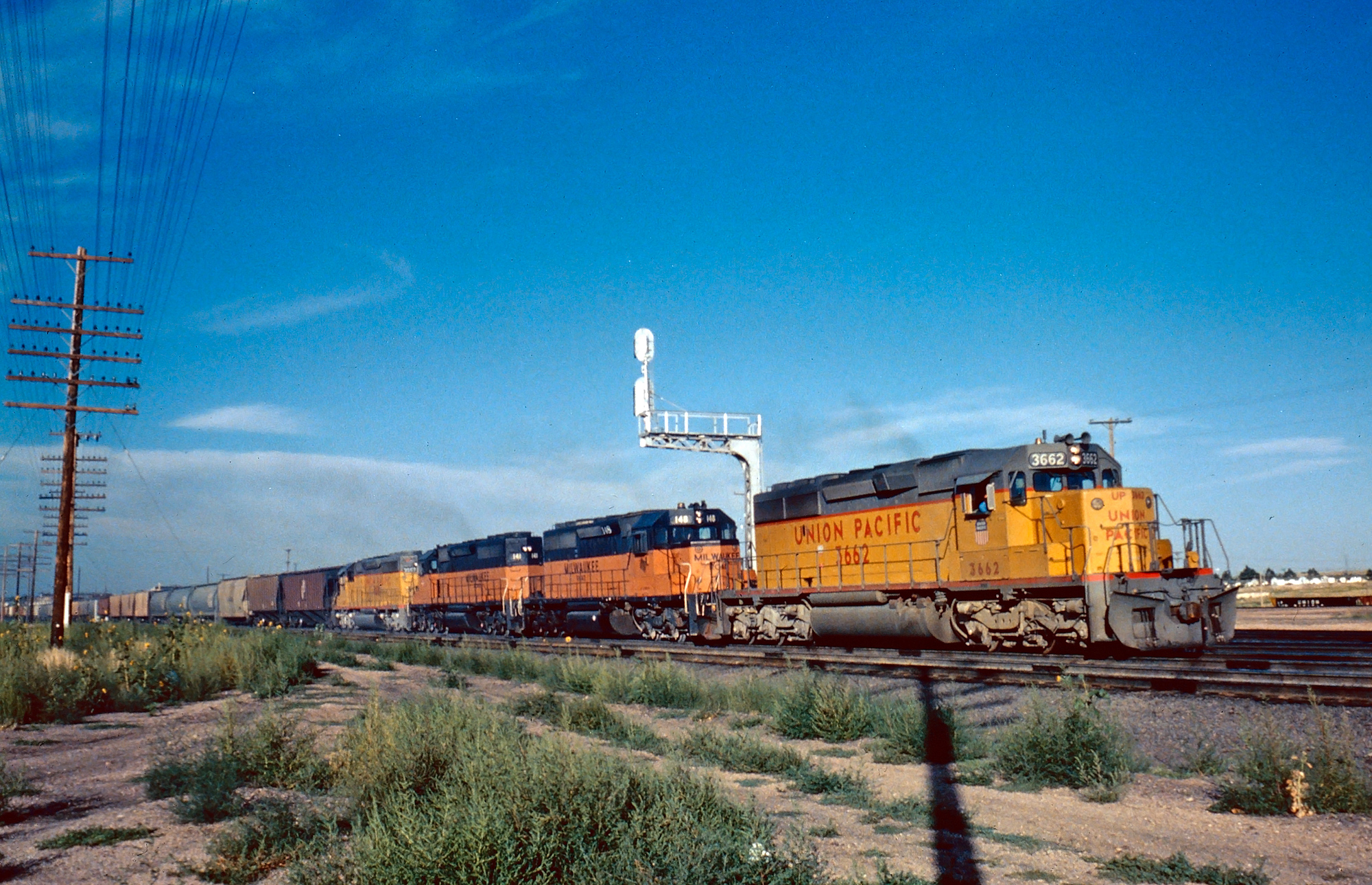 Aside from general features like dynamic brakes and turbocharging (a feature that EMD had only begun adding to its locomotives with the SD24 of the late 1950s, the SD40 featured an airtight hood that kept out dust, dirt, and other particles from reaching internal components.

To cool these critical components the SD40 featured a single air intake for electrical cooling, with a pressurized cooling system.

This was another recent development first featured on the earliest second-generation models like the GP20 and GP30. By the time production ended on the SD40 series an astronomical 5,200+ units had been built!

Most of these were SD40-2s as just under 4,000 were produced during its fourteen years of production while the SD40 chipped in another 1,200+. 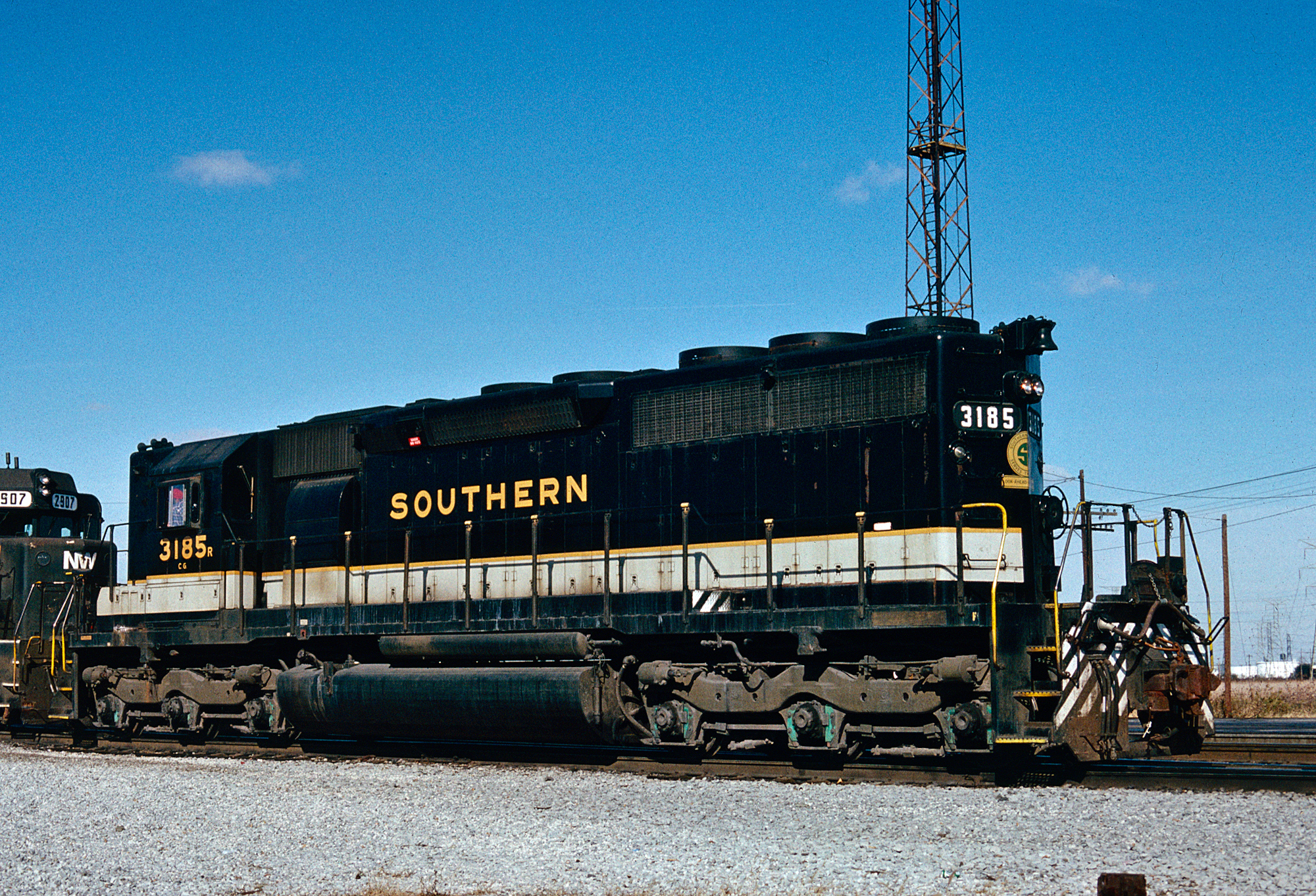 There were numerous variations of the SD40 series constructed due to its enormous success. These models include the SDP40 which was built for passenger service and featured a steam generator.

Unstable at high speeds Amtrak operated the locomotives for only a few years before replacing them. Another was the SD40A, which at 70 feet, 8 inches was longer (built from an SDP45 frame) to accommodate a 5,000 gallon fuel tank.

All eighteen were purchased by Illinois Central. There was also the test model SD40X (hence the "X"), also known as an SD35X.

The experimental unit featured EMD's then new 645 prime mover and was essentially the birth of the SD40, using the frame of the SD35. Five were constructed between 1965 and 1966, all purchased by the Kansas City Southern.

Another experimental design was the SD40-2S built in the spring of 1978. It was meant to provide more power by featuring a larger turbocharger and larger 645E3 engine block.

Just nine were built and purchased by the Burlington Northern and Union Pacific.

The most successful variant was the SD40T-2 constructed between June, 1974 and July, 1980. Some 310 examples were sold to Denver & Rio Grande, Southern Pacific, and SP subsidiary Cotton Belt for use in high altitude mountainous tunnel service.

The Espee had solved ventilation issues in tunnel operations during the steam era with the Cab Forward design. However, nothing was available in the diesel era until the "tunnel motors" were released; first with the SD45T-2 of 1972 followed a few years later by the SD40T-2. 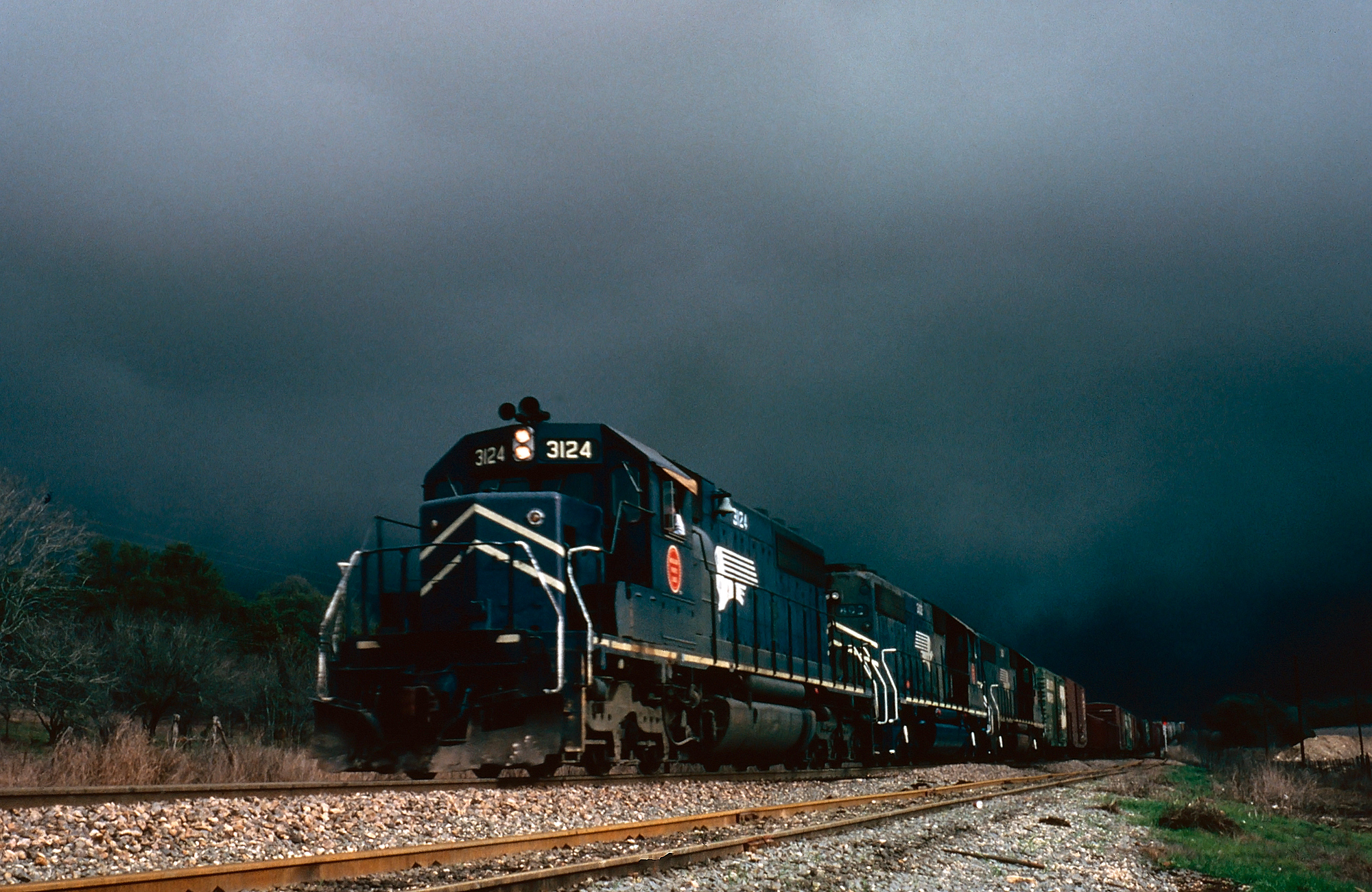 A trio of Missouri Pacific SD40-2's, led by #3124, have southbound freight FWSA (Fort Worth - San Antonio) at the north end of Bergstrom Siding in South Austin, Texas on February 14, 1980. Mike Bledsoe photo. According to Mike's son, Steve Bledsoe, "Engineer Joe Covert called our house from the Austin depot to let my dad know that he had three 'Screaming Eagles' and would be heading south in a few minutes. So off we went. At the time the MoPac locomotives with the eagles on the side were becoming fewer and fewer." American-Rails.com collection.

EMD solved the ventilation issues and problems of the diesels overheating by placing the radiator intakes and radiator fan grills to the rear of the locomotive along the bottom of the carbody (to also pick up as much fresh air as possible) and away from top of the locomotive where all of the hot fumes exited.

This redesign completely solved the issue and the railroads no longer had serious problems with units overheating when operating through long tunnels. 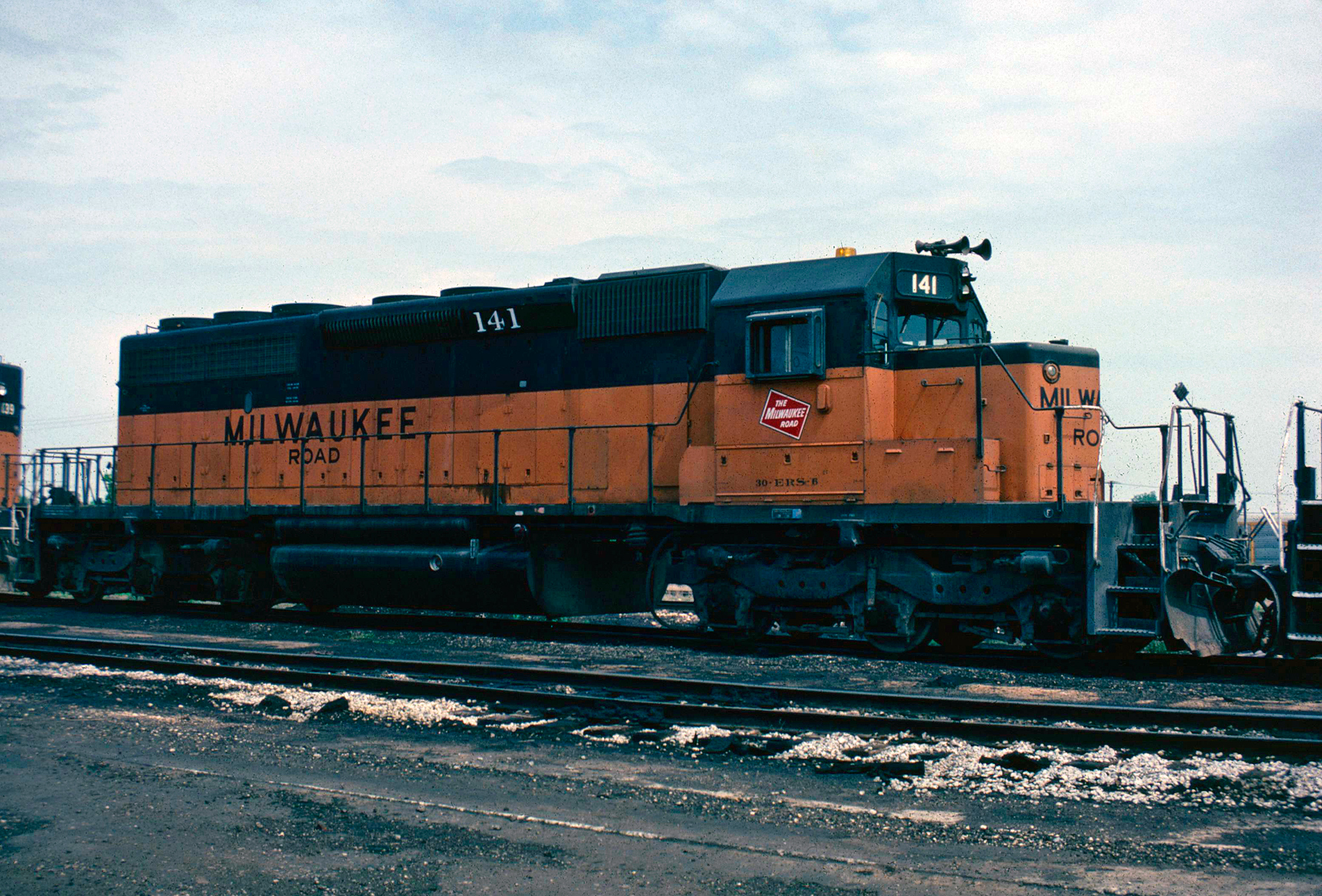 All were built by the General Motors Diesel division in London, Ontario. All other variants of SD40s you may run across are rebuilds that were not factory-direct designs (such as the SD40-3 that features upgraded electronics).

While one day the SD40s will slowly begin to disappear I think one can safely say that they will be around for years to come so just keep an eye out and you can routinely spot one in active service one Class Is, regionals and short lines.