The Shoreland/Valley 400 was one of many new streamliners the Chicago & North Western initiated during the early 1940s.  This particular set of trains served the popular Chicago to Green Bay corridor running via Milwaukee/Fond du Lac.

According to Jim Scribbins in his book The 400 Story they, and the other 400s launched at this time, were based closely from the original inaugurated in 1939 that proved so successful for the C&NW.

For about a decade the railroad experienced strong ridership among its streamliner fleet, which it believed would continue following the astronomical traffic surge during the World War II conflict.

However, this was not to be and patronage waned throughout the 1950s, leading to evermore.  What remained of the former Shoreland/Valley 400 service was finally discontinued in 1971. 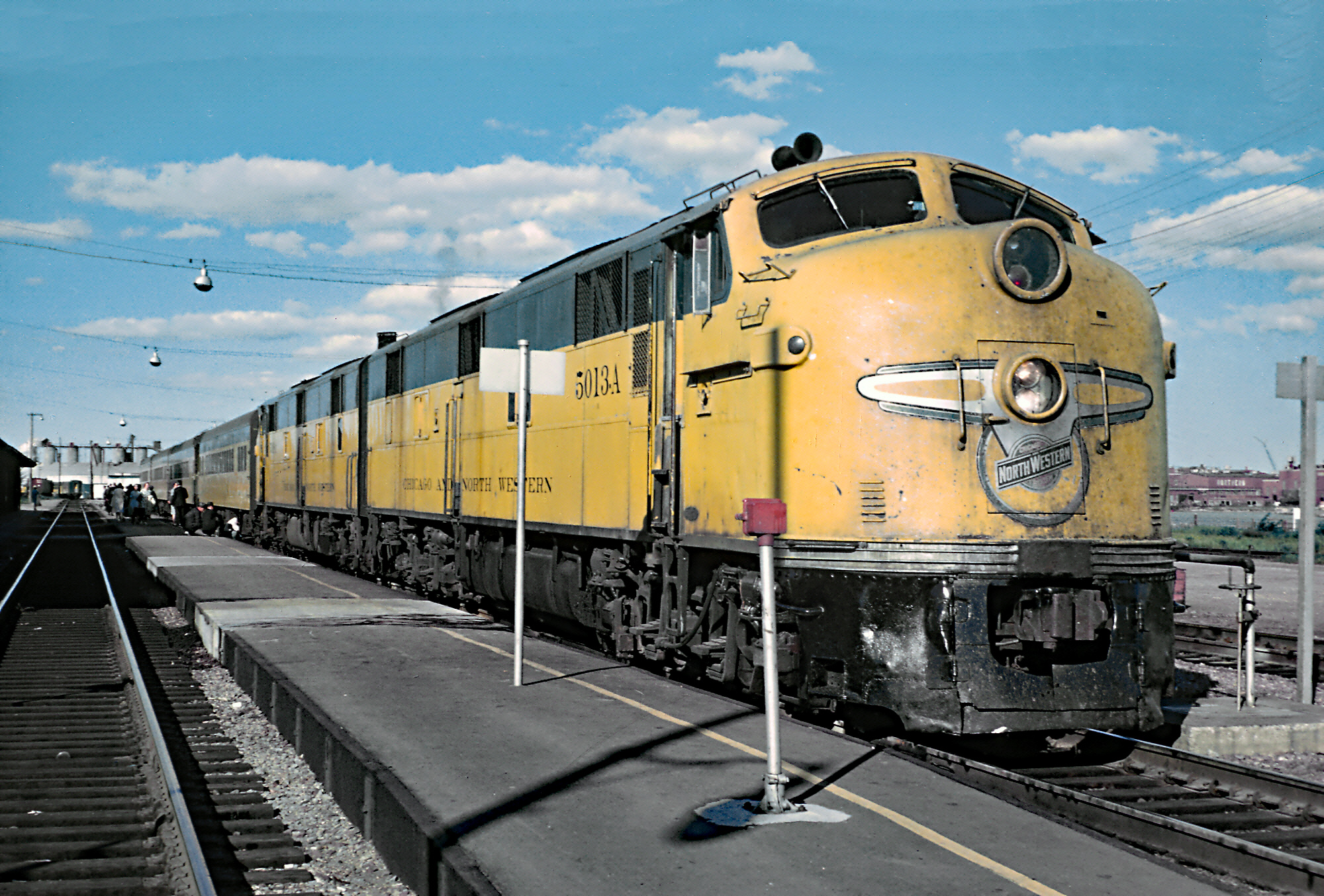 A Brief History Of The Shoreland/Valley 400

When the Chicago & North Western reequipped its original 400 with lightweight equipment from Pullman-Standard, and diesels from Electro-Motive, the railroad was already playing catchup against the Burlington and Milwaukee Road.

These roads had already launched their first streamliners serving the Chicago-Twin Cities market some four years earlier in 1935.

Ironically, the C&NW could proclaim itself as the first to offer high-speed service along this corridor when it launched the original 400 on January 2nd of that year.

However, a bankruptcy precluded the company from purchasing streamlined equipment allowed to do so from the trustee in 1939.

The rechristened 400 was widely promoted by the C&NW and the company also quick to highlight its status as all diesel-powered.

According to one advertisement, featured in conjunction with EMC/GM, and displayed on the cover of the September, 1939 edition of Railway Age:

"Built for high-speed, economical, safe and comfortable transportation, these EMC locomotives are capable of a top speed of 117 miles per hour and will make the six and one-half hour, four hundred mile run of the '400' without changing locomotives and without the necessity of continuous top speeds."

The latter statement was speaking in regards to the now "antiquated" steam locomotive with diesels all the rage.

The 'North Western witnessed an incredible level of patronage with its relaunched 400 and soon fielded an entire fleet serving the far reaches of its system.  The first of these new cars, also Pullman products, began arriving during January of 1942.

According to Scribbins, there were four complete sets within this order which allowed the C&NW to launch the Peninsula 400, Capitol 400, Commuter 400, City of Milwaukee 400, and Shoreland/Valley 400.

The latter was an interesting endeavor; the Shoreland 400 was listed on C&NW's timetable as train #153, the northbound run departing Chicago for Green Bay via Milwaukee.

In turn, its southbound counterpart was train #216, named the Valley 400 and running from Green Bay to Chicago via Fond du Lac.

Over the years, the trains' numbers changed, as did the level of services provided.

The original consist for these trains consisted of a baggage-tap-café-lounge, reclining seat coaches, and a standard parlor while power was provided by new E6 diesels from Electro-Motive (in later years the trains were powered by E7s and E8s).

Scribbins notes that one of the most interesting and unique features of the Shoreland/Valley 400 was the baggage-lunch-counter-diner cars that arrived during 1950 from Pullman-Standard.

"...tables seating four angled so that two persons had their backs toward the windows while their companions sat in moveable chairs with their backs to the aisle. Across the aisle, triangular tables for two pointed toward angled banquettes against the wall."

The postwar era was one filled with hope and enthusiasm for railroads, believing the streamliner and strong ridership experienced during the war years would lead to another "Golden Age" of rail travel. 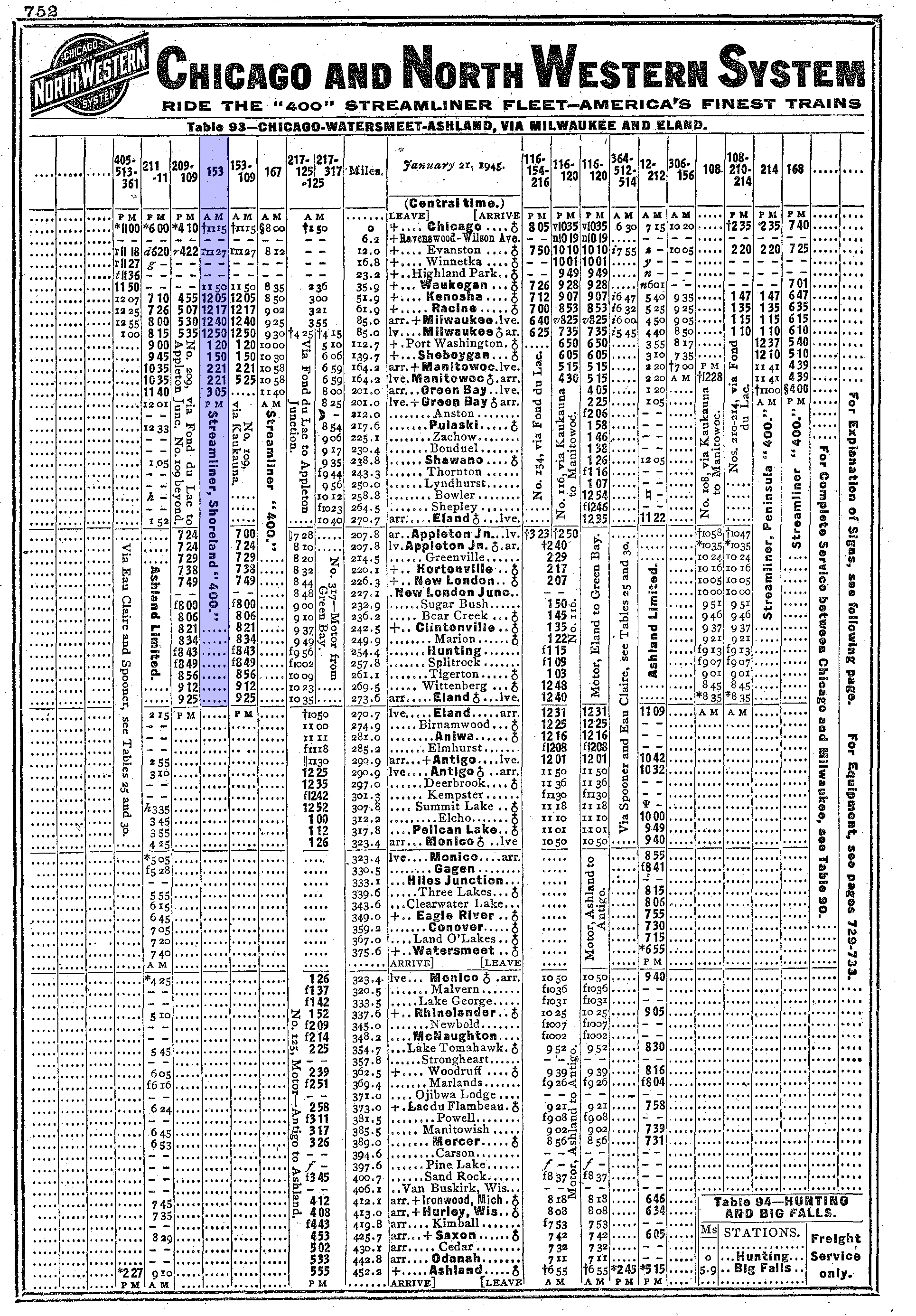 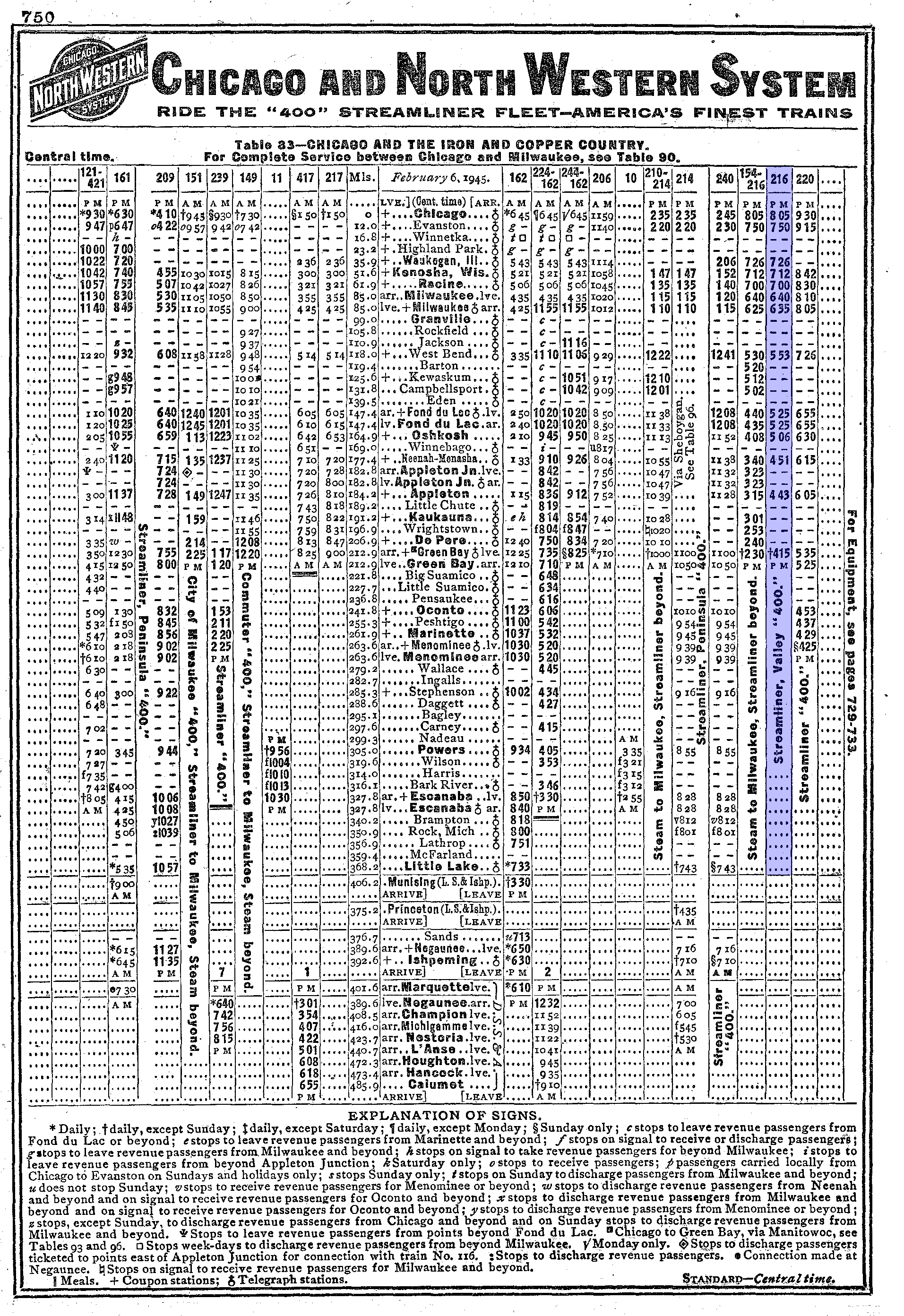 Unfortunately, this was not to be as the C&NW experienced firsthand.  By the 1950s, coupled with Union Pacific's move to the Milwaukee Road to handle its City fleet into Chicago, the 'North Western realized the public's interest for trains was waning.

In an ironic twist, the railroad began wide-scale cutbacks within its passenger fleet when just a few years before it was still launching new 400s.

The most notable changes occurred during 1958 when the C&NW acquired new bi-level, gallery cars from Pullman-Standard and through a deal with the state of Wisconsin the implementation of this equipment enabled the railroad to discontinue 14 secondary, money-losing trains.  Some of these cars would later be assigned to the Shoreland/Valley 400. 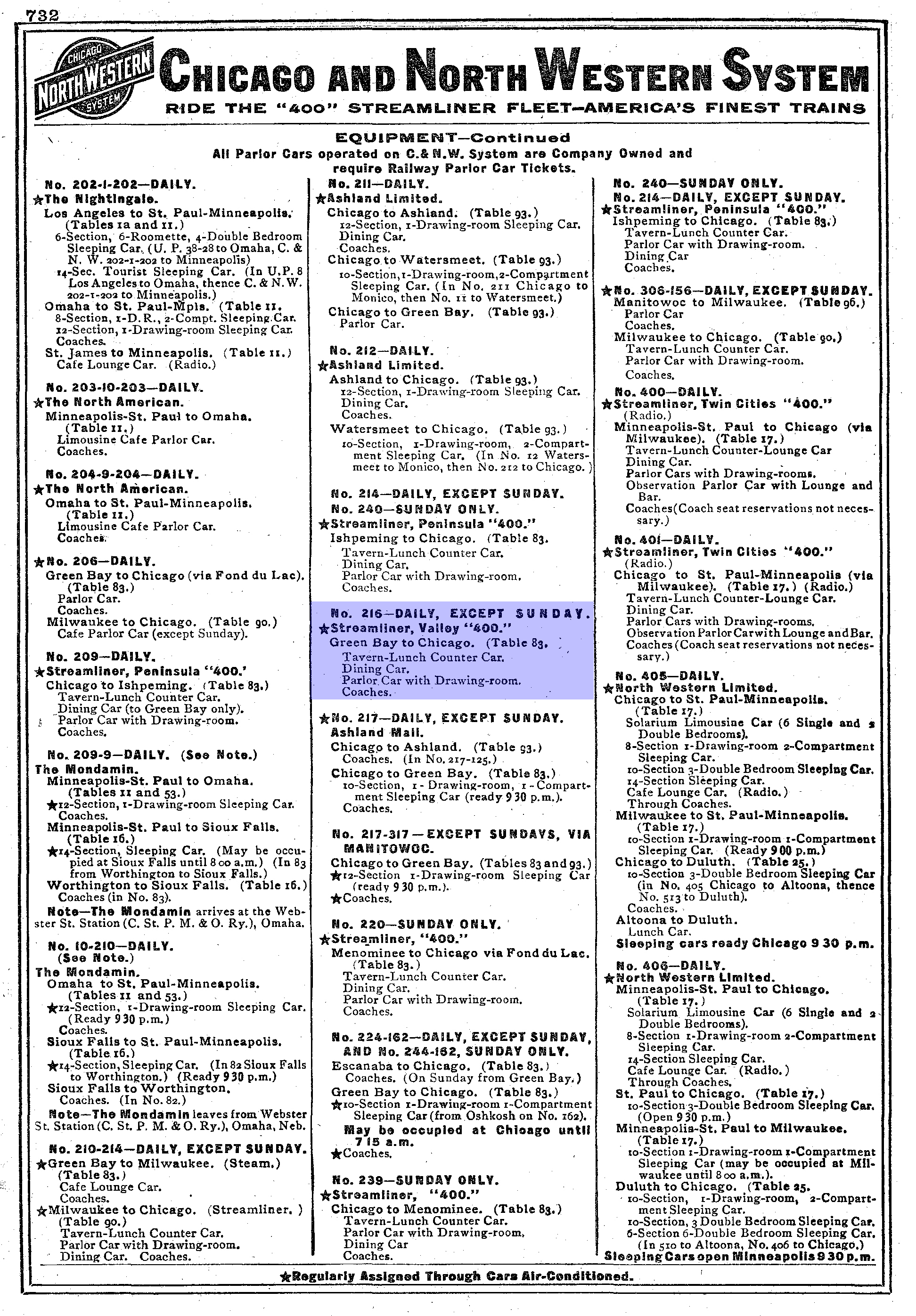 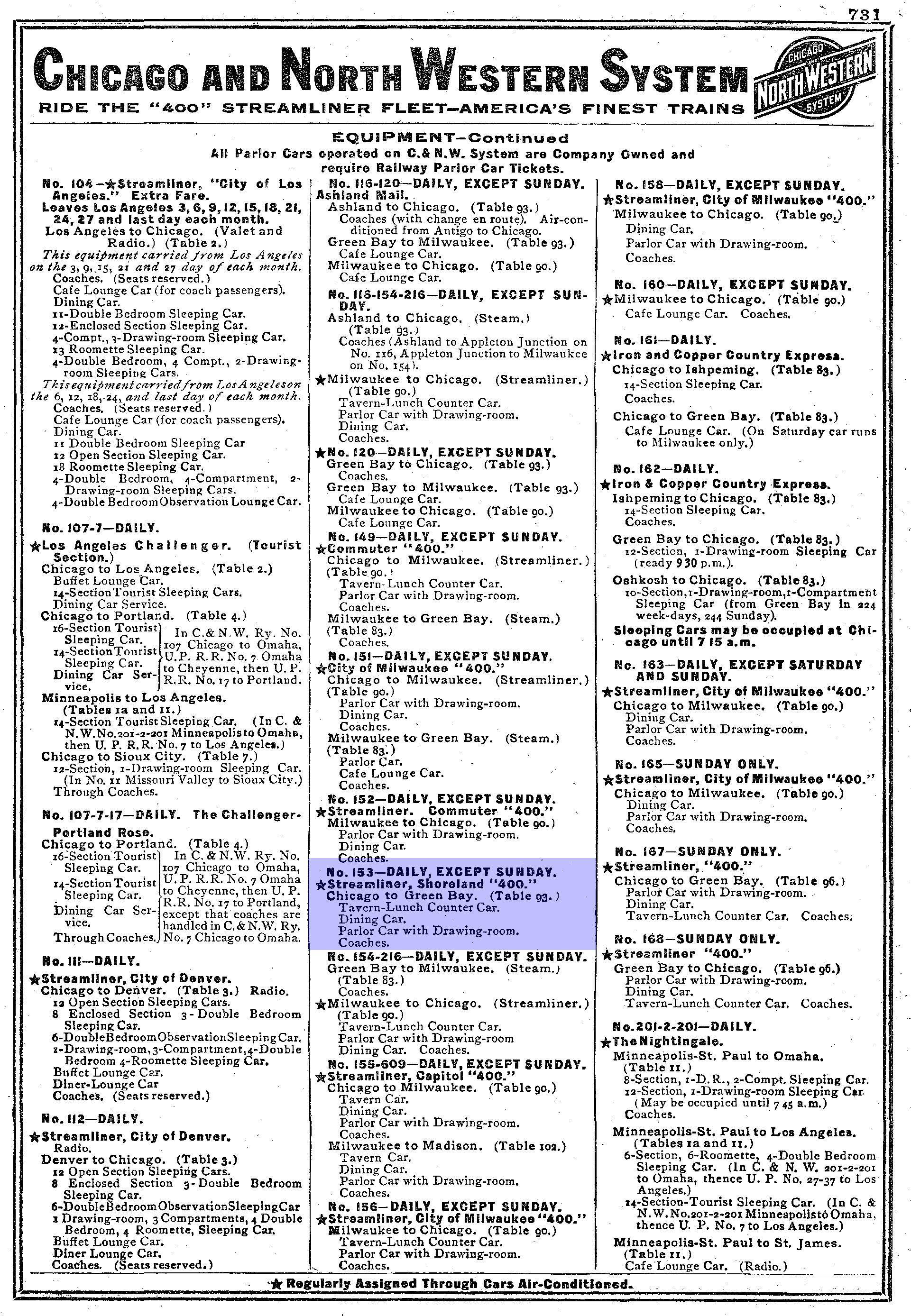 As the '50s gave way to the 1960s, it was clear the public would never return to the rails as their primary means of travel.  The decade witnessed continuing cutbacks within the C&NW fleet as the railroad attempted to stave off growing losses.

This came to a head in 1969 when Scribbins writes:

"...when the Peninsula 400 was discontinued north of Green Bay in mid-July, C&NW quietly dropped the 400 name, referring to its trains only as streamliners.  What had started on January 2, 1935 in a brilliant burst of optimism and had grown into a fine example of modern passenger train operation was no more."

According to the railroad's 1969 timetable only train #206 was still operating between Green Bay and Chicago offering reclining-seat coaches via bi-level cars.  It was later discontinued in 1971.