The St. Johnsbury & Lamoille County Railroad(reporting marks, SJL) was known by many names over the years. The shortline began life in the 1860s with ambitions to operate a through route connecting the ports of Maine with the Great Lakes region of New York.

Unfortunately, money issues forced planners to use the railroad as a bridge line only and their hopes were further dashed by friendly connections purchased and taken over by larger rivals.

Ultimately, the short line became a subsidiary of the Boston & Maine and proved to be quite successful as a bridge route moving a wide variety of freight.

To railfans the road was the archetypical New England short line with meandering curves, covered bridges, and breathtaking scenery across its once 100-mile system (so much so that the bucolic route's official nickname became The Bridge Road).

In the 1970s it was purchased by Vermont and sadly withered away in the 1990s. Finally, the state converted the route into a rail/trail in the early 2000s. 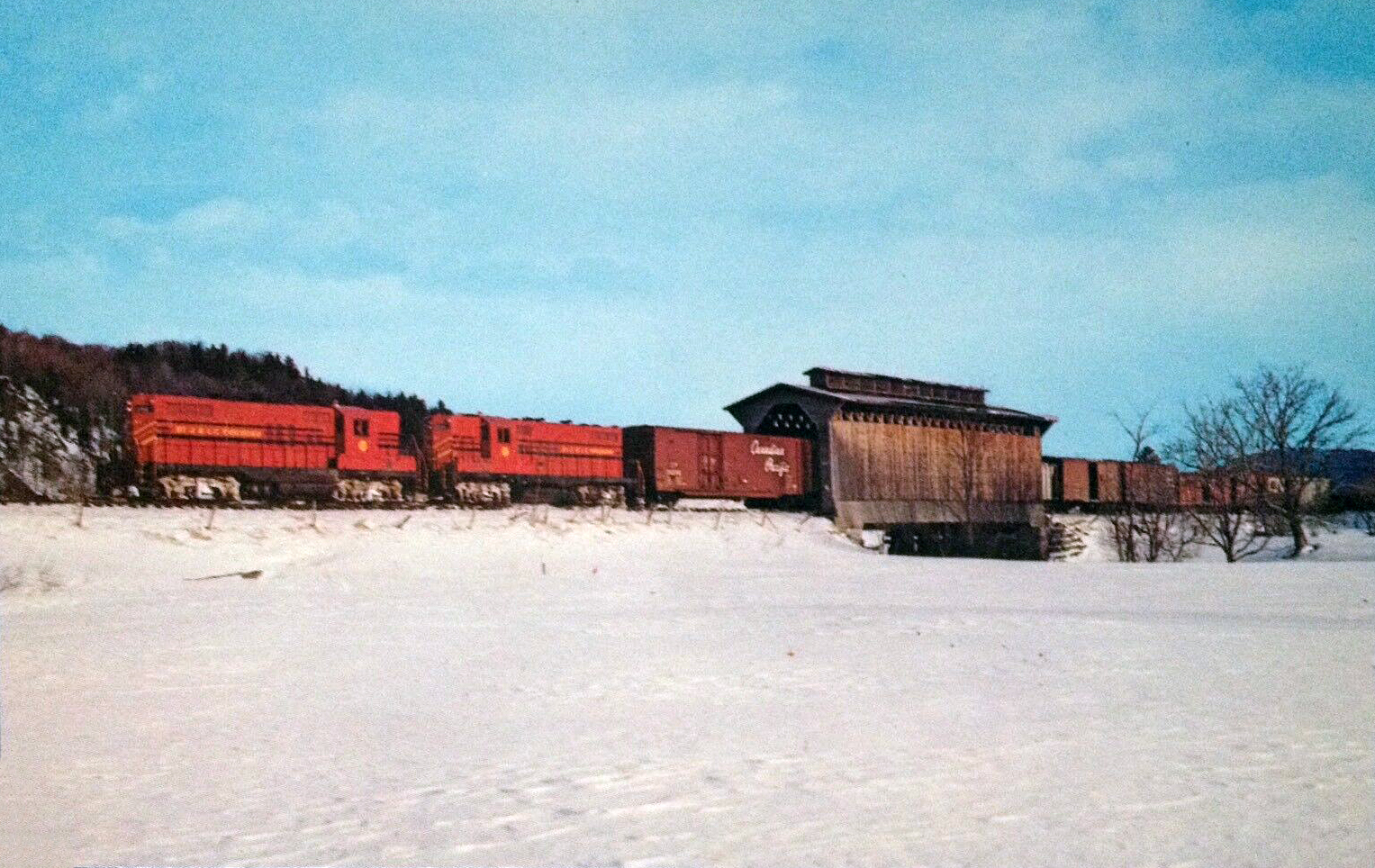 The history of the St. Johnsbury and Lamoille County Railroad can be traced back to the chartering of the Portland & Ogdensburg Railroad on February 11, 1867.

The P&O was conceived to construct a through route from Portland, Maine through upstate New Hampshire and Vermont to reach Ogdensburg, New York along the St. Lawrence River.

Altogether, the railroad was to stretch roughly 400 miles and intended as a vital link connecting Maine's largest port to the Great Lakes shipping lanes along the St. Lawrence.

Two years later in 1869 local businessman began construction of the P&O's Vermont Division which looked to extend west from St. Johnsbury (by August of 1875 the original P&O route had reached Lunenburg, a few miles east of St. Johnsbury).

Unfortunately, the P&O was in financial distress soon after the opening of the Vermont Division and declared bankruptcy on October 19th that same year.

Following this setback the dreams of reaching the Lakes had died and the P&O property was sold off.

The Vermont Division was reorganized as the St. Johnsbury & Lake Champlain Railroad Company in 1880, which was acquired by the Passumpsic Railroad (a Boston & Maine subsidiary) after that company floated a loan to the StJ&LC to help it resume normal operations (the StJ&LC would pass into the hands of the Boston & Lowell in 1885 another B&M asset).

The remainder of the original P&O was reorganized as the Portland & Ogdensburg Railway in June of 1884 and became a division of the Maine Central Railroad four years later in August of 1888 (this route proved to be the MEC's farthest reach west).

While the new extension of the B&M system was riddled with sharp curves, numerous trestles and bridges, and sections of steep grades that reached greater than 2.4% the StJ&LC ultimately became quite profitable.

The railroad found an array of customers that shipped a wide range of freight over its line including:


During the height of the road's size it continued to grow following the B&M takeover reaching Rouses Point, New York in 1883 along with a branch that had once extended just west of Swanton.

Interestingly, after the StJ&LC opened its line to Rouses Point it still had hopes of operating as a major connection between the Lakes and Atlantic Ocean. 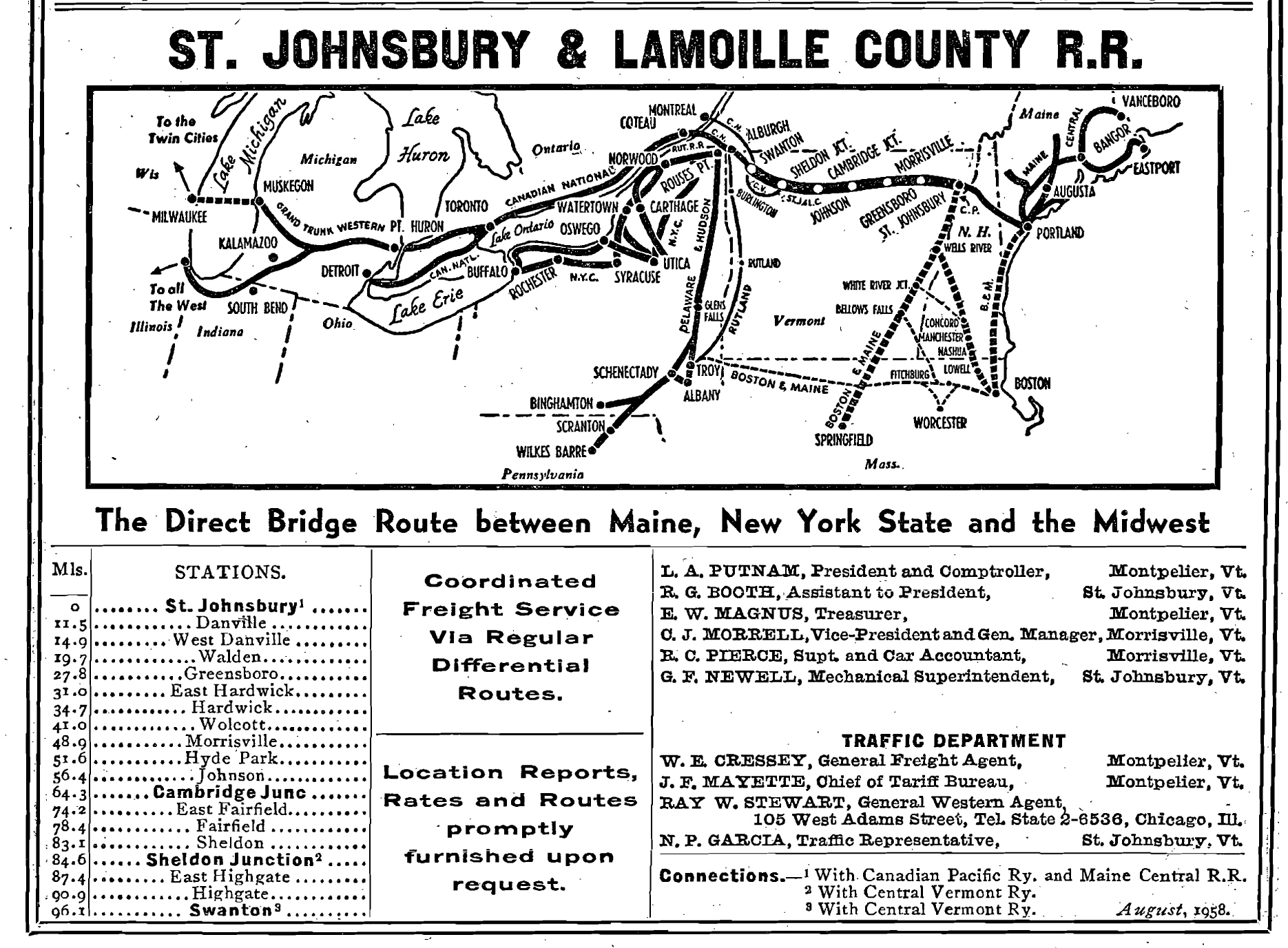 Through this new extension it had a friendly connection to the Ogdensburg & Lake Champlain Railroad, which had a direct route to Ogdensburg along the river.

During these few years the StJ&LC was particularly profitable as it was able to complete the original P&O dream by working with the O&LC and original Portland & Ogdensburg route to offer shippers a direct Great Lakes-Atlantic corridor.

Frustratingly for the short line, the O&LC was soon acquired by the Rutland Railroad which used its new subsidiary to route its own freight to Ogdensburg, bypassing the StJ&LC.

This left little need for the line to Rouses Point, which was abandoned and made Swanton as the road's western terminus. In the end, though, the StJ&LC system was simply too circuitous and slow to be a high-speed gateway for priority shipments.

Additionally, in the following years the company saw improved relations with the Rutland and both lines worked together moving various types of traffic.

This also held true for its eastern connection with the MEC, which was always friendly.

For most of its time as a subsidiary of the B&M the StJ&LC was a profitable operation, except for a period during the mid-1920s when the parent allowed the road to return to independent management.

It struggled to survive due to its debt issue at the time (which was not helped by the Great Depression). As a result, the B&M resumed control on December 2, 1946 and reorganized the company as the St. Johnsbury & Lamoille County Railroad two years later in 1948.

At this time the company began the task of replacing its aging Class K-7 2-8-0 Consolidations, all of which were handed-down B&M units with more efficient diesels (the railroad had also used 2-6-0 Moguls, 4-6-0 Ten-Wheelers, and 0-6-0 switchers).

These would be the only new diesels the railroad ever owned although it supplemented these with several used units including more 70-tonners, a 44-tonner along with a few GP9s and five RS3s during the late 1960s and early 1970s.

A few years later the state began a heavy rebuild of the infrastructure from 1977 through 1979 that saw new ties, ballast, and heavier 100+ pound rail laid to replace the aging, original 56 and 85-pound rail.

(Thanks to Philip R. Hastings' "S. Johnsbury  & Lake Champlain" from the May, 1947 issue of Trains as a primary reference for this article.) 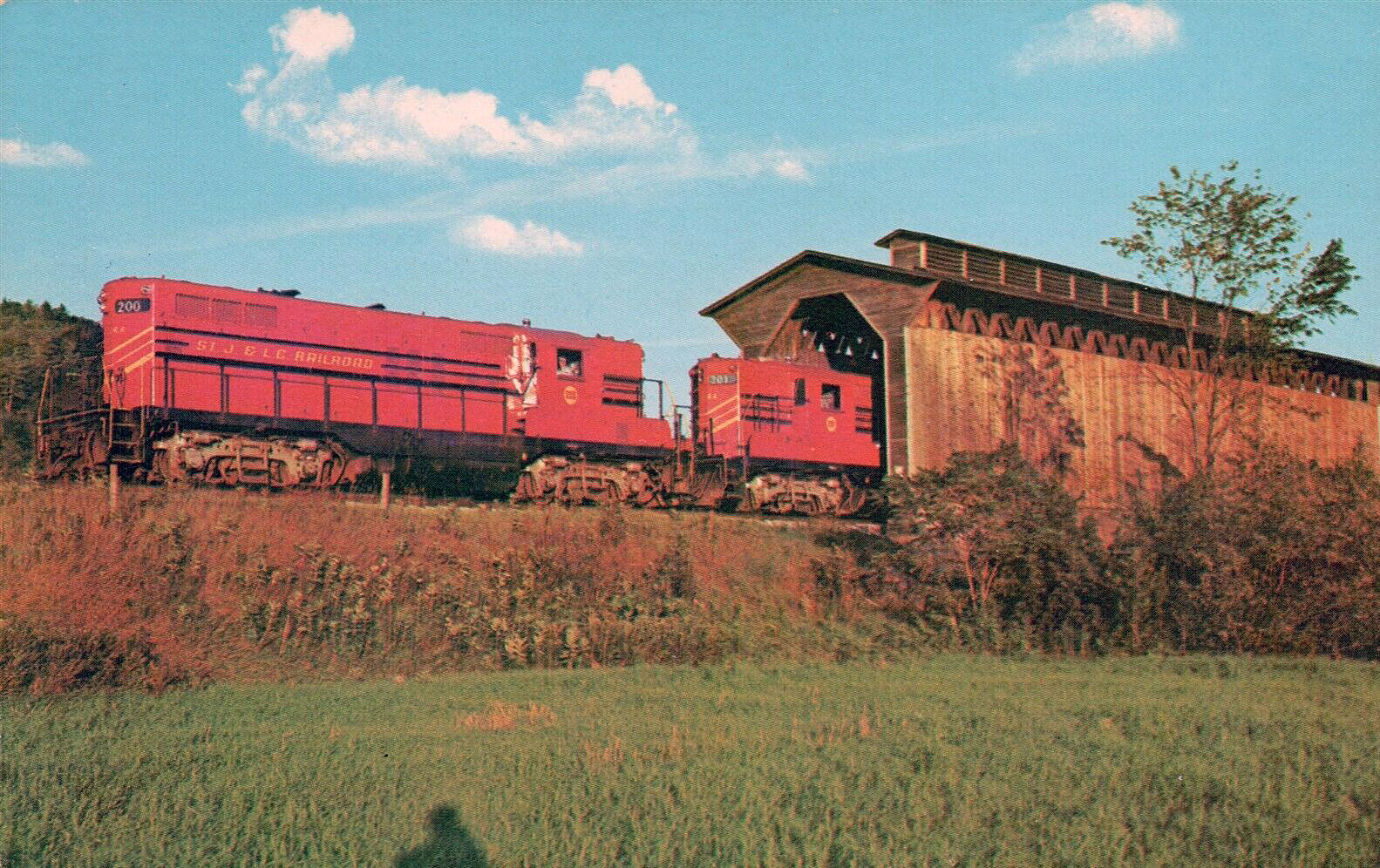 The 1980s, though, were not kind to the short line. It lost most of its bridge traffic during the decade and numerous customers with the closure of online mines and the region's overall loss of manufacturing (once a booming industry in New England).

In 1989 the state leased out the railroad to a private operator but continued traffic losses saw all operations cease in 1994.

Then, even Mother Nature herself no longer seemed interested in the short line's continued operation as severe flooding washed out large sections of the right-of-way between Wolcott and Hardwick.

Vermont attempted to revive services in 1998 to restore the system but legal issues stalled any such plans. Finally, the state gave up and converted much of the corridor into a rail/trail beginning in 2002.