Thanks to the Southern Railway's blanket of lines all across the southeastern United States it fielded an impressive fleet of passenger trains serving this region of the country.  One of its many secondary runs was known as the Skyland Special and provided service from Asheville to Jacksonville, Florida.

During the train's peak years its consist included both coaches and Pullman sleepers.  Inaugurated in the 1920s the Skyland was considered a counterpart to the Carolina Special (Cincinnati - Greensboro/Charleston) with through connections available to southern points in the Sunshine State.

As patronage declined the train was combined north of Columbia and eventually disappeared altogether in the late 1950s.  The name was briefly resurrected in the 1970s as a short excursion east of Asheville before being canceled a few years later.

The Southern once fielded a wide array of trains serving Cincinnati, the Queen City.  Most of these runs were bound for either Florida or the Atlantic Coast such as the Ponce de Leon (Jacksonville), Royal Palm (Jacksonville),  Florida Sunbeam (Floridian points), and the Carolina Special (Charleston, South Carolina).

The latter, although never streamlined was considered by the railroad as one of its more prestigious trains offering reclining seat coaches, sleepers, a diner, dinette-coach, and through service to points north and west of Cincinnati.

In the late 1920s the Southern launched the Skyland Special to complement the Carolina.  While the train did not run through to Chicago (via the New York Central), terminating instead at Asheville, North Carolina it operated further south by reaching Jacksonville via Charlotte and Columbia. Its name derived from the resort city of Asheville.

Located within the Blue Ridge Mountains and nearby Great Smoky Mountains the was also known as "The Land Of The Sky."

The Southern was quite cognizant of this fact and promoted the location heavily in advertisements; one such travel brochure from 1914 was entitled "Summer In 'The Land Of The Sky,' Resorts Along The Southern Railway, Premier Carrier Of The South."

The Skyland's consist normally included a mix of coaches (reclining seat and standard) and Pullman sleepers.  For instance, in 1946 the train offered the following:

The train's power varied depended on the territory.  Since it operated through the stiff grades of western North Carolina/South Carolina and was forced to tackle the legendary Saluda Grade just east of Asheville the Skyland normally ran with larger wheel arrangements such as Class Ts Mountains and Class Ms Mikados (helpers were almost always required over the 4%+ grades of Saluda).

In general, though, one could find a classic Ps4 Pacific up front.  The train was listed as #23 (southbound) and #24 (northbound) by the railroad.

According to its 1954 timetable #23 departed Asheville at 5:45 PM and arrived in Jacksonville the following morning at 9:25 AM; its #24 counterpart would leave Florida at 9:20 PM and arrive back in Asheville at 10:50 AM the next day. 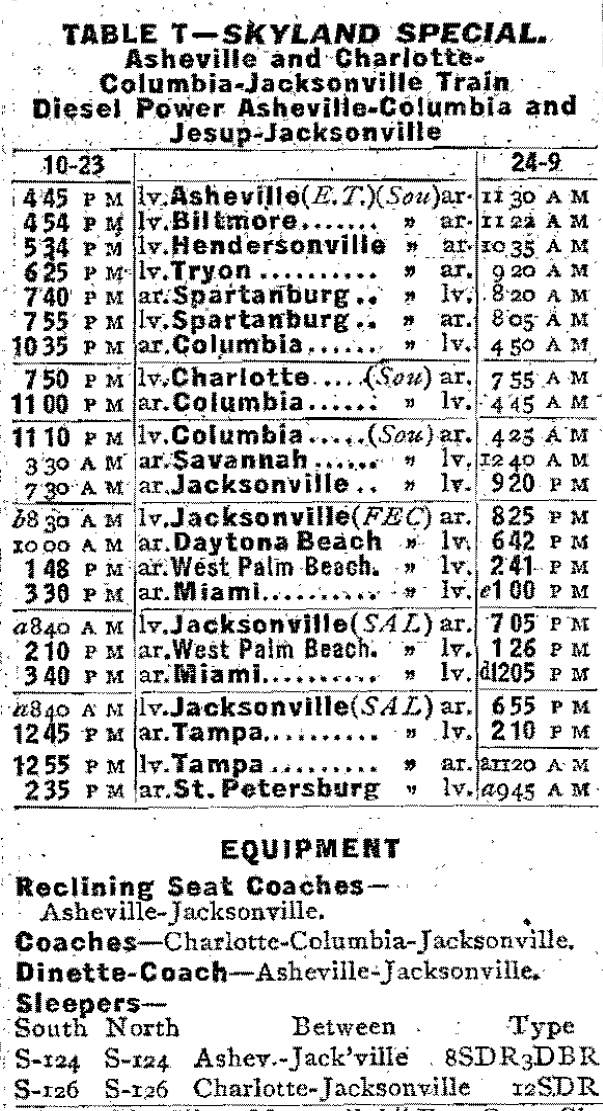 The Southern also worked in conjunction with the Florida East Coast to provide connecting service to Miami as well as the Seaboard Air Line, which offered travelers the choice of either Miami or St. Petersburg.

The Skyland Special was furloughed during the World War II years but serviced resumed in 1947.  Shortly thereafter in 1949 the railroad stopped offering through service to South Florida.

That same year diesels replaced steam power in the form of Electro-Motive E7s and earlier-purchased E6s.  Alas, the 1950s were a bad decade for the railroad industry and rail travel in general.  The public began abandoning trains for the independence automobiles provided and the speed of airliners.

The timetable featured above shows the Skyland just before it lost its status as an entirely independent run.  Soon after the train was combined with the Augusta Special between Charlotte and Columbia. 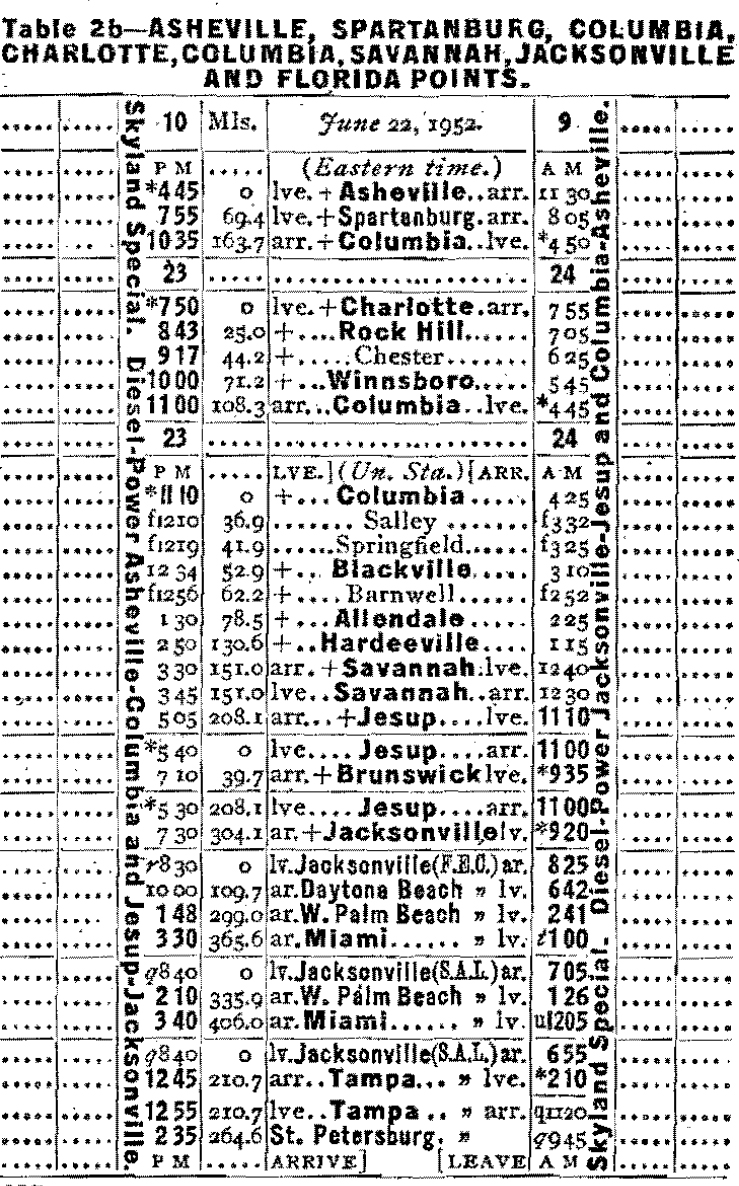 The remaining segment to Jacksonville continued for a few years until it lost its lucrative mail contract in 1957 which prompted the Southern to cancel the Skyland altogether.  Interestingly, the train's name was brought back in 1975 thanks to president W. Graham Claytor, Jr.

Operated as an excursion it was inaugurated on August 9th, departing Asheville's Biltmore Station at 9 AM and traveling 30 miles to Old Fort, arriving there at 10:20 AM before departing by 11 AM and returning back to Asheville by 12:30 PM.

Claytor, a railfan at heart and historian by nature who loved steam locomotives stated that:

"The Skyland Special will take the tourist on a leisurely ride up, down, over, and literally through the most beautiful landscape the Tar Heel state has to offer..."

It was, indeed, a beautiful excursion providing wonderfully scenic views of the western North Carolina mountains while passing through seven tunnels and negotiating the famed Old Fort Loops.

Running during select weekends throughout the year the train's consist normally consisted of an FP7, several coaches, a dome, and a covered but open-air gondola.

It was perhaps the only example of a railroad offering regularly scheduled excursions on its property and operated for a little more than two years before its discontinuance in 1977.