The St. Louis Car Company was one of the largest builders of streetcar and interurban equipment in the industry. The company was a major competitor other industry leaders like the J.G. Brill and the Cincinnati Car Company.

Its location should also be noted. There were a number of other builders in the St. Louis area; not surprising when one considers that Illinois and the Midwest were home to the largest concentration of interurbans and street railways throughout the country.

St. Louis Car built a wide range of equipment from standard interurban cars (including equipment for freight operations) to small Birneys and other streetcar designs.

Interestingly, the company was one of the longest lasting businesses which got its start building streetcars. After the industry withered away the manufacturer switched to constructing other equipment including subway cars, trolley buses, and even airplanes. 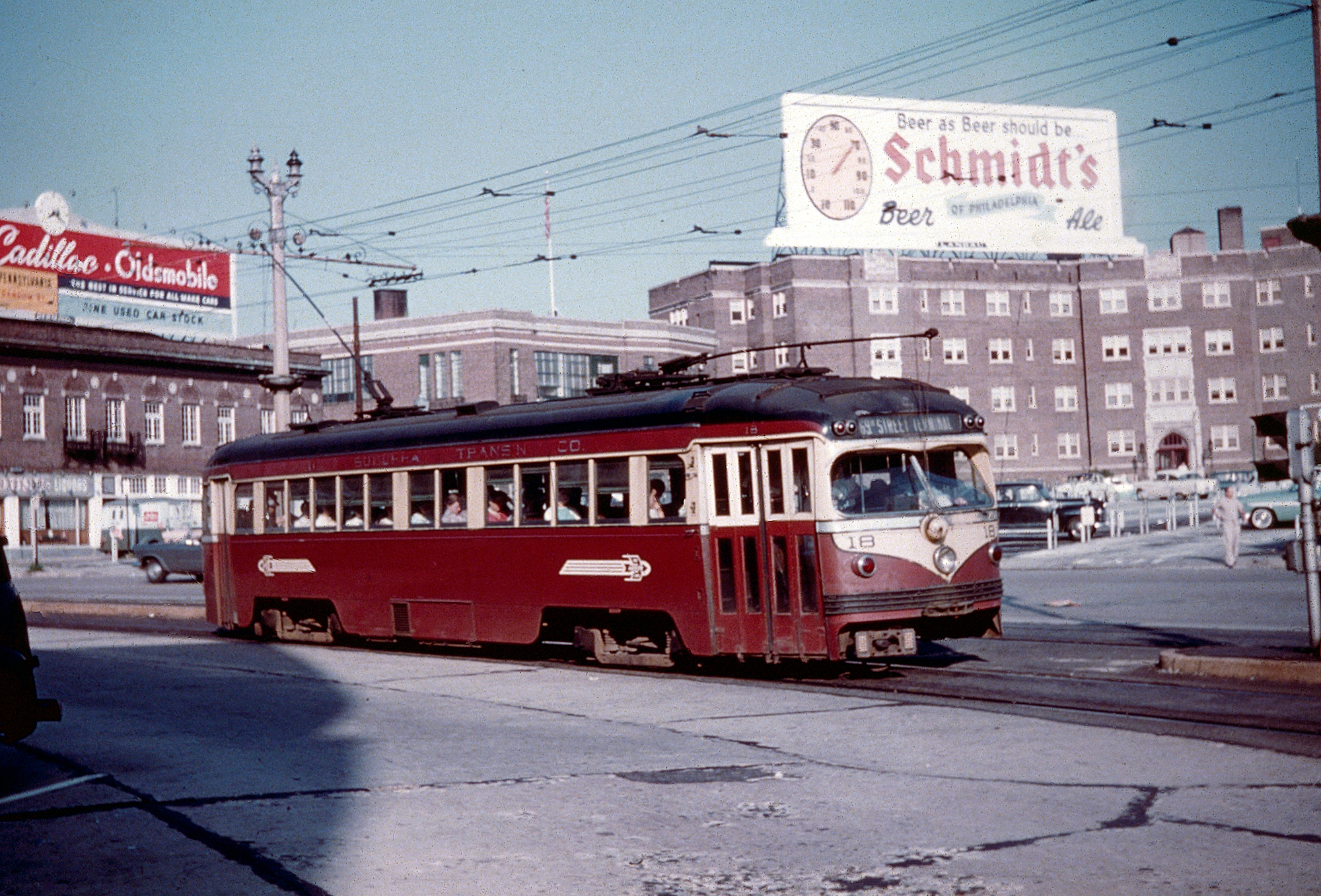 Red Arrow Lines (Philadelphia Suburban Transportation Company) car #18, a product of the St. Louis Car Company, is at Terminal Square near the West Chester Pike in Philadelphia during the early 1960s. American-Rails.com collection.

St. Louis Car was officially founded on April 4, 1887 in its home city as a means to serve the growing demand for streetcar, and later interurban, services.

Even though the operation postdated the J.G Brill Company by nearly 20 years it nevertheless became one of the industry leaders. Like Brill, St. Louis Car started off building small two-axle horse and electric street cars.

To do so it constructed a nearly 50,000 square-foot building very near the Mississippi River, strategically located to receive shipments of logs and lumber, used in the construction of its cars.

By August of 1887 the company was in full production and by the end of the year had either taken orders for or built some 400 cars of various design.

From its outset the St. Louis Car Company focused almost exclusively on streetcar and interurban equipment, unlike some other competitors (notably J.G. Brill) that also dabbled in main line railroad equipment for a time.

After less than three years in business the company had to expand its plant facility in 1890 to keep up with the demand. Expansion was again needed by later that decade and to do so St. Louis purchased the newly formed Union Car Company located in Baden, just north of the city.

Still unable to keep up with growing demand new buildings were constructed constructed around the turn of the century and in 1902 the company purchased another competitor, the Laclede Car Company also located in St. Louis. 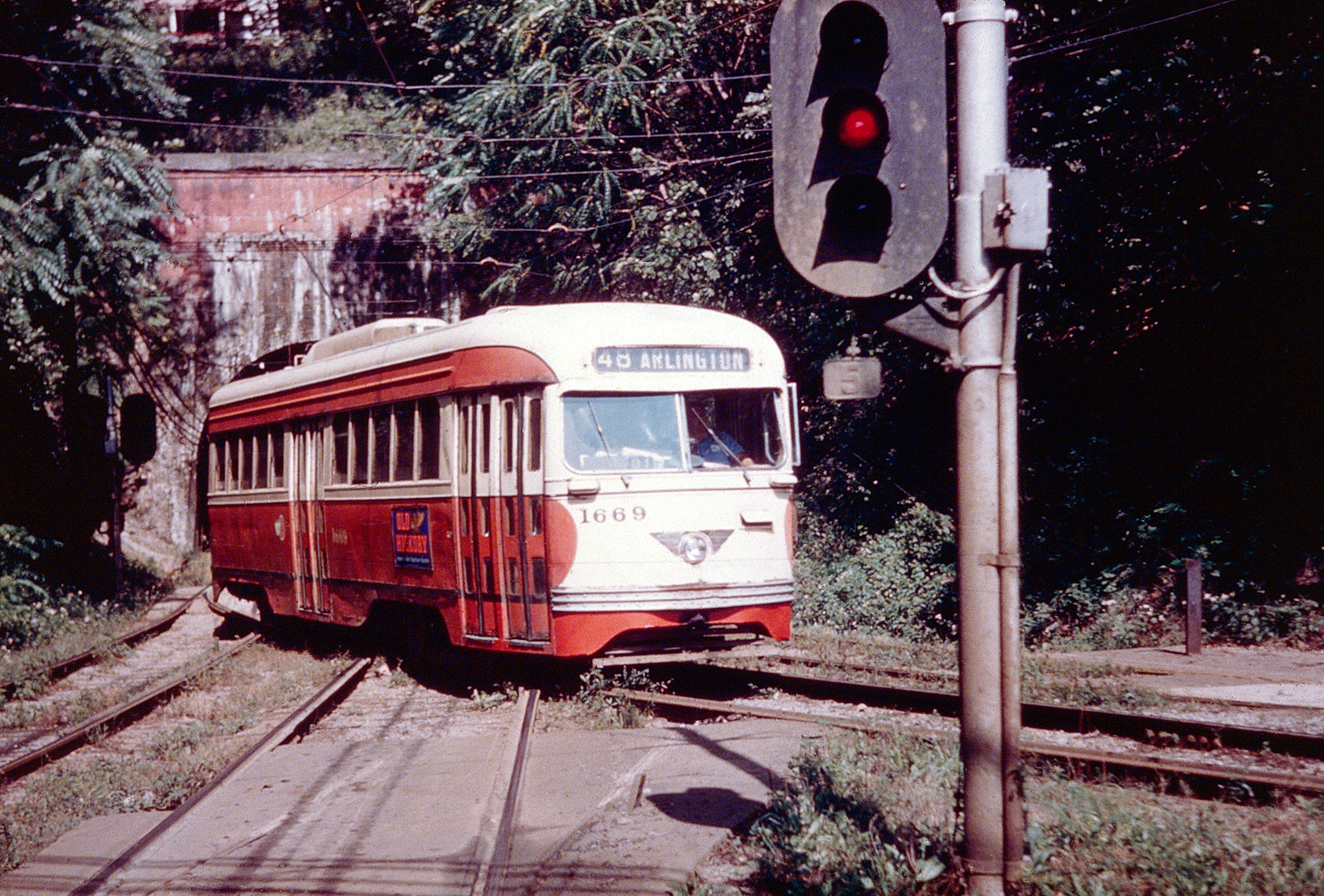 Pittsburgh Railways PCC #1669 (a 1944 product of the St. Louis Car Company) exits from the Mt. Washington Tunnel during the early 1960s. American-Rails.com collection.

During the company's early years it primarily built cars custom-ordered for each particular streetcar system or interurban.

However, this changed in later years as St. Louis began cataloging its own line of cars such as convertibles (which had panels that could be removed allowing for open-air riding in the warmer months) and freight equipment for interurbans.

The latter was particularly true in the first decade of the 20th century as the interurban industry began to take off providing St. Louis, and all car builders at the time another market in which to sell their products. 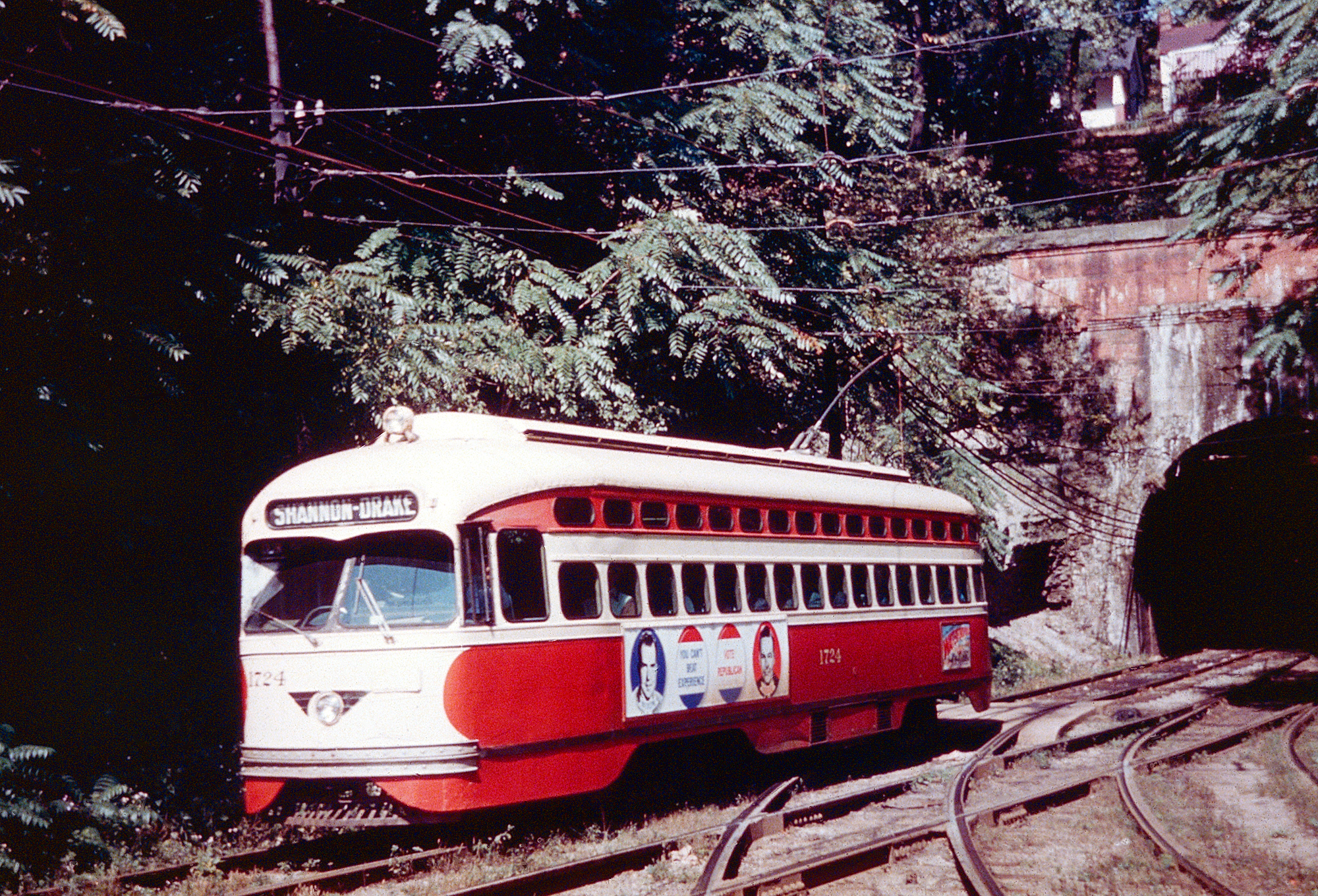 Pittsburgh Railways PCC #1724 (a 1949 product of the St. Louis Car Company) exits from the Mt. Washington Tunnel during the early 1960s. The PRC was a big proponent of the PCC, owning 666 examples, the third-most in North America. American-Rails.com collection.

Of course, it should be noted that in general, car manufacturers focused mostly on streetcar equipment as there was almost always a greater demand for such.

The only time in which this was not the case was during the period around 1909. That year, some 1,245 power cars were constructed only for interurbans, which made up a full 50% of all built.

However, as the industry began to decline 10 years later new orders quickly fell away and by 1920 interurban sales made up just 10% of all equipment built. 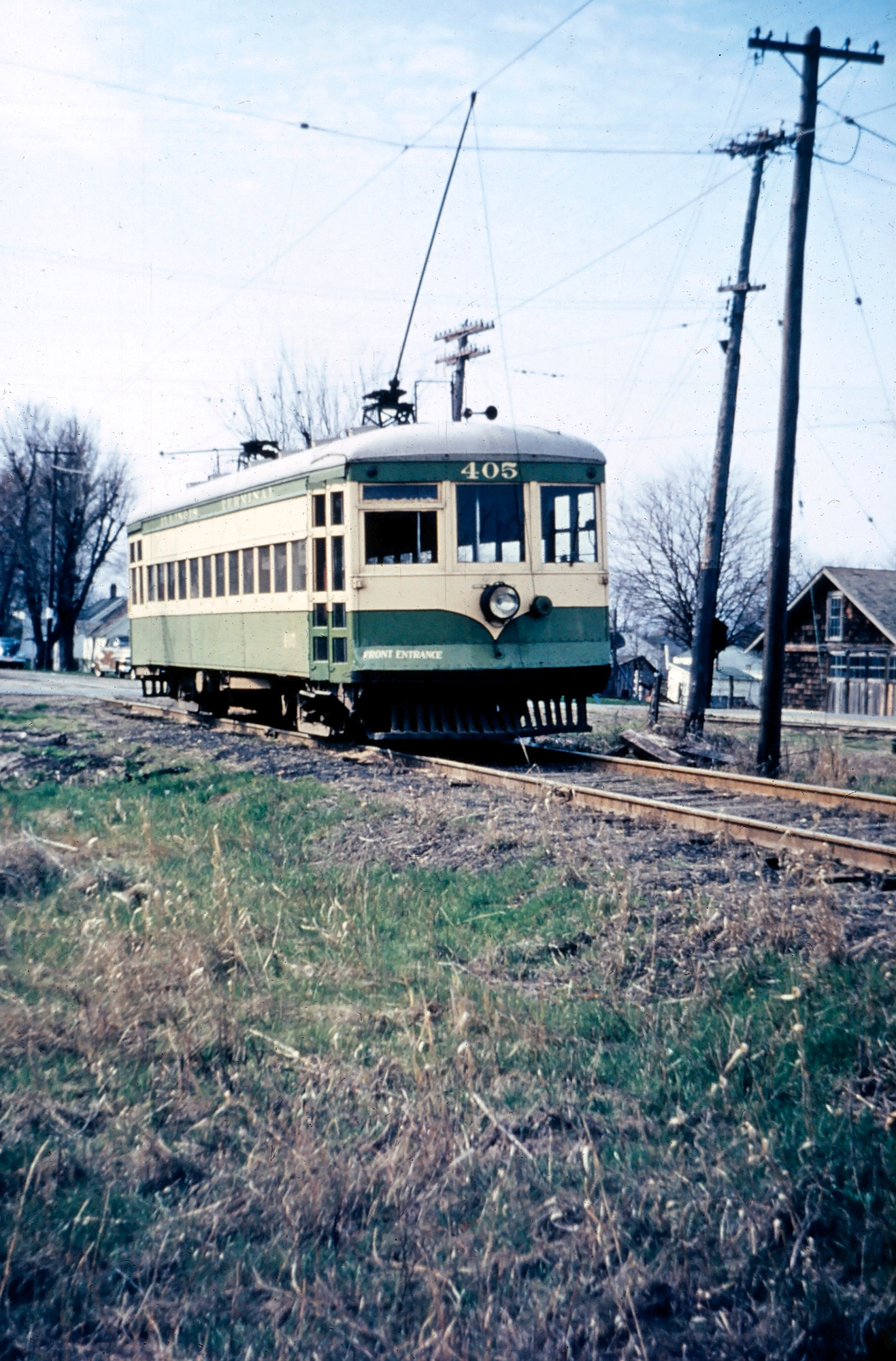 Illinois Terminal car #405 is on the Forsyth Line near Forsyth, Illinois, in the spring of 1952. This car was originally built for the Chicago & Illinois Valley (Chicago, Ottawa & Peoria), and acquired by Illinois Traction in 1923 when it became part of the latter's Illinois Valley Division. American-Rails.com collection.

St. Louis Car built a wide range of cars during the 20th century, most of which as aforementioned centered around streetcars. However, the company also made handsome profits through the construction of the popular PCC streetcar (the Presidents' Conference Committee car) and the Birney Safety Car.

Its most prominent design was the Chicago, North Shore & Milwaukee's streamlined Electroliner trainsets of 1941. These beautiful articulated cars remained in use on the North Shore Line for nearly 20 years before being retired and were one of the final orders placed by an interurban for new equipment. 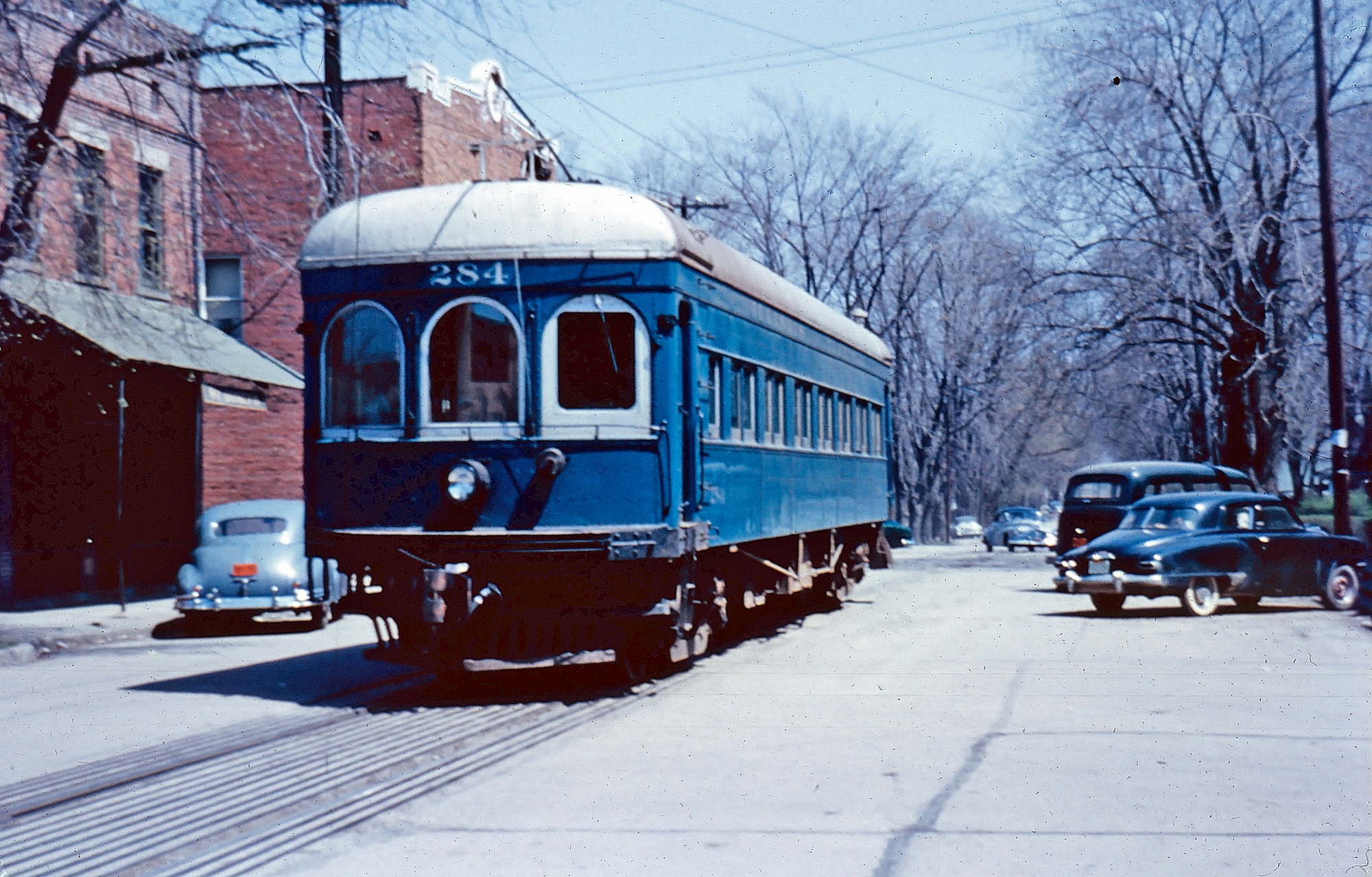 Illinois Terminal car #284 is seen here on East Lincoln Street in St. Joseph, Illinois, circa 1950. Service along the Danville line ended entirely a few years after this photo was taken (cutback to Ogden in 1952, then Champaign a year later). This car was a product of the St. Louis Car Company. James Stitzel photo. American-Rails.com collection.

As the streetcar and interurban industry died away by the 1940s St. Louis Car switched to building other equipment including buses, trolley buses, and even some automobiles. During World War II it built gliders, Alligators (also known as a Landing Vehicle Tracked or LVT), and the flying boat seaplane.

In 1960 the company was purchased by General Steel Industries and during its final years in business constructed subway and MU cars for agencies such as New York City Subway (NYCT), Port Authority Trans-Hudson (PATH), and the Southeastern Pennsylvania Transportation Authority (SEPTA).  With a shrinking market and demand, the company finally closed its doors in 1973 after nearly 100 years of continuous production.

It is interesting to wonder what may have become of this company had it survived just a little longer when rapid transit systems slowly began making a comeback in large cities across the country. Nevertheless, a great deal of former St. Louis equipment survives today, such as the famous Electroliners.