The sleeper, also sometimes referred to as Pullmans since the Pullman Company was most famous for its sleepers, have a history which date back to the 1830s.

However, true, dedicated such cars were not found in widespread use on railroads until the late 1860s with the coming of George Pullman's Pullman Palace Car Company.

Over the years and as technologies improved sleepers became better equipped and were sometimes combined with other car types, such as observations, and known as sleeper-observations.

In his book, "The American Railroad Passenger Car (Part 1)," the sleeper was the most widespread car found in first-class service.

Like all specialized cars its development was slow, occurring over several decades from the first example in 1838 until Pullman unveiled the Pioneer in the spring of 1865.

Pullman was by no means the first to introduce sleeping service aboard a train.  He was, however, the most successful and eventually produced cars on a large scale.

Today, aboard Amtrak, one can still purchase sleeping service known as Bedrooms, although, just as during the "Golden Age" of passenger rail travel it costs extra. 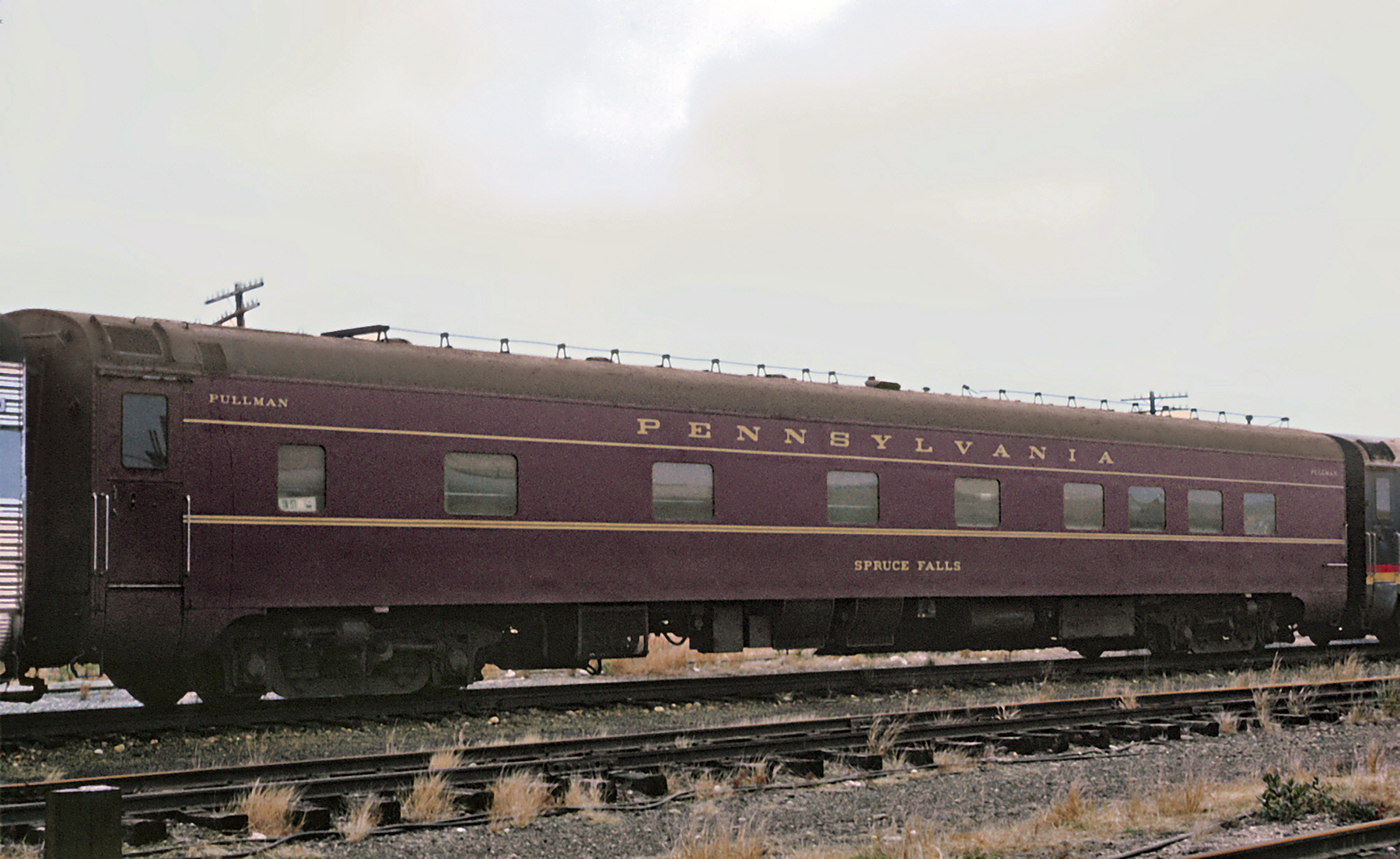 Modern, lightweight Pullman's came in a wide variety of plans and arrangements. Seen here is Pennsylvania 6 Double-bedroom/buffet-lounge "Spruce Falls" (built by Pullman in 1940), in service on the Long Island Rail Road on November 19, 1969. Roger Puta photo.

Sleeping cars have their earliest history dating back to 1838 with the construction of the Chambersburg, built by the Cumberland Valley Railroad.

Mr. White's book notes that while accounts vary on the car's actual construction (as early as 1836 or 1837), the railroad's main line from Chambersburg to Harrisburg, Pennsylvania did not open until February, 1838 and as such the car could not have entered service before that time.

It featured berths along the car's walls, separate men and women compartments, oilcloth ceiling, lit with candles, water closet in the women's section, and an iron stove for heating.

The car featured bunks stacked as many as three high with the bunk nearest the floor convertible into a seat.

These types of sleeping arrangements were known as berths (whereby the seat folded out into a bed setup), and were common through the mid-20th century. The car proved so successful the railroad built a second, the Carlisle that was out-shopped circa 1842/1843.

Sleeping arrangements on passenger trains became an increasingly common service after the construction of the Chambersburg.

While Pullman built the most successful sleeper empire there were many manufacturers prior to his company.

In fact, there were more than a dozen companies manufacturing sleepers prior to the founding of the Pullman Palace Car Company in 1867.  These included: 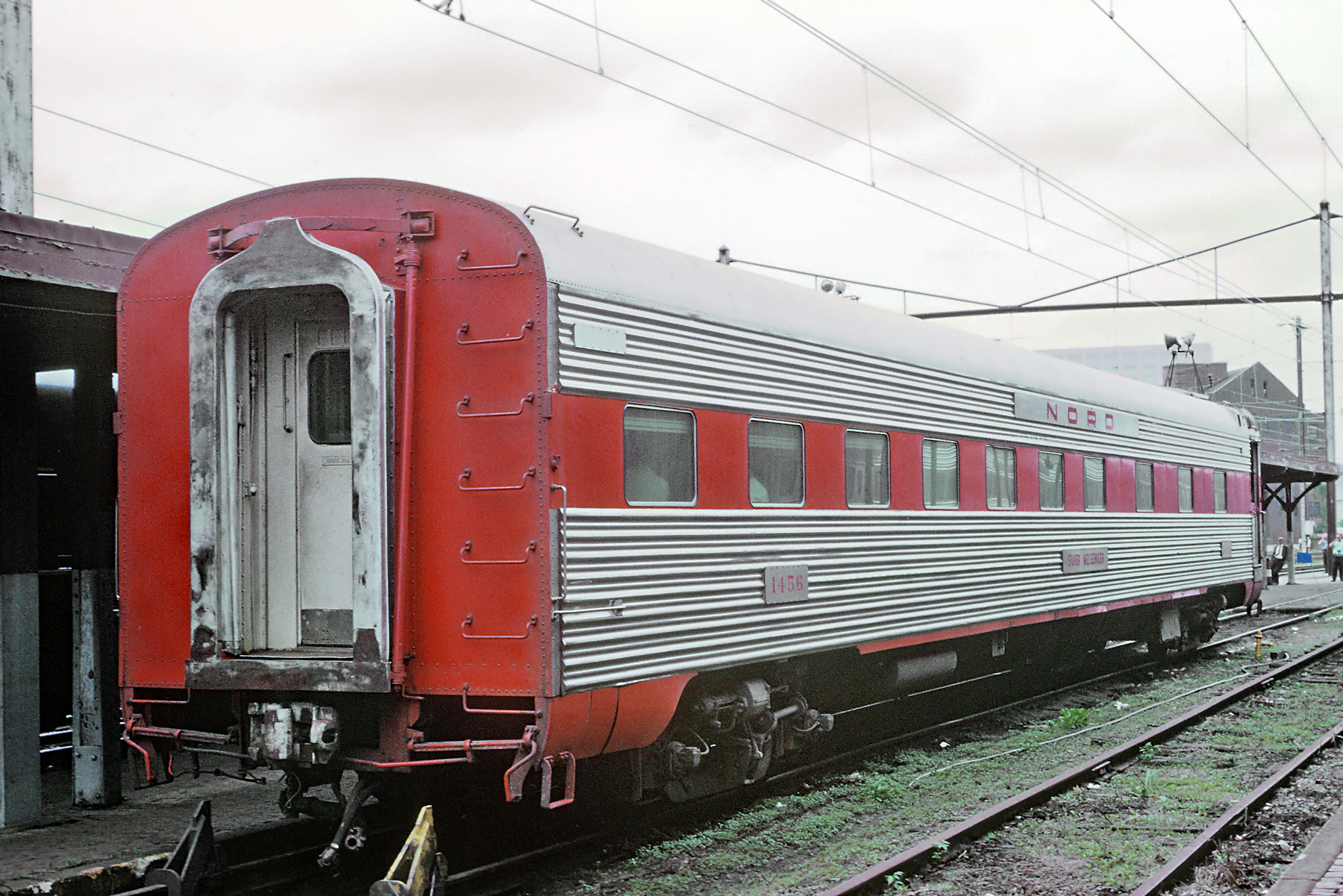 NORD, a photo processing company, acquired former St. Louis-San Francisco Railway 14 roomette/4 double-bedroom "Eugene Field" (built new by Pullman in June, 1948) as a traveling sales office. It is seen here in Harrisburg, Pennsylvania on May 18, 1969. The car was later acquired that year by the New York Division of Railroad Enthusiasts. It is currently owned by the Arizona Railway Museum and located in Chandler, Arizona. Roger Puta photo.

There were also numerous railroads operating sleepers prior to 1870 including:


Pullman would perfect the car and became so successful that the term "Pullman" generally described the car, even if a particular one wasn't built by the company. Early car designs offered some type of berth arrangement whereby the seats could be laid out into a bed. 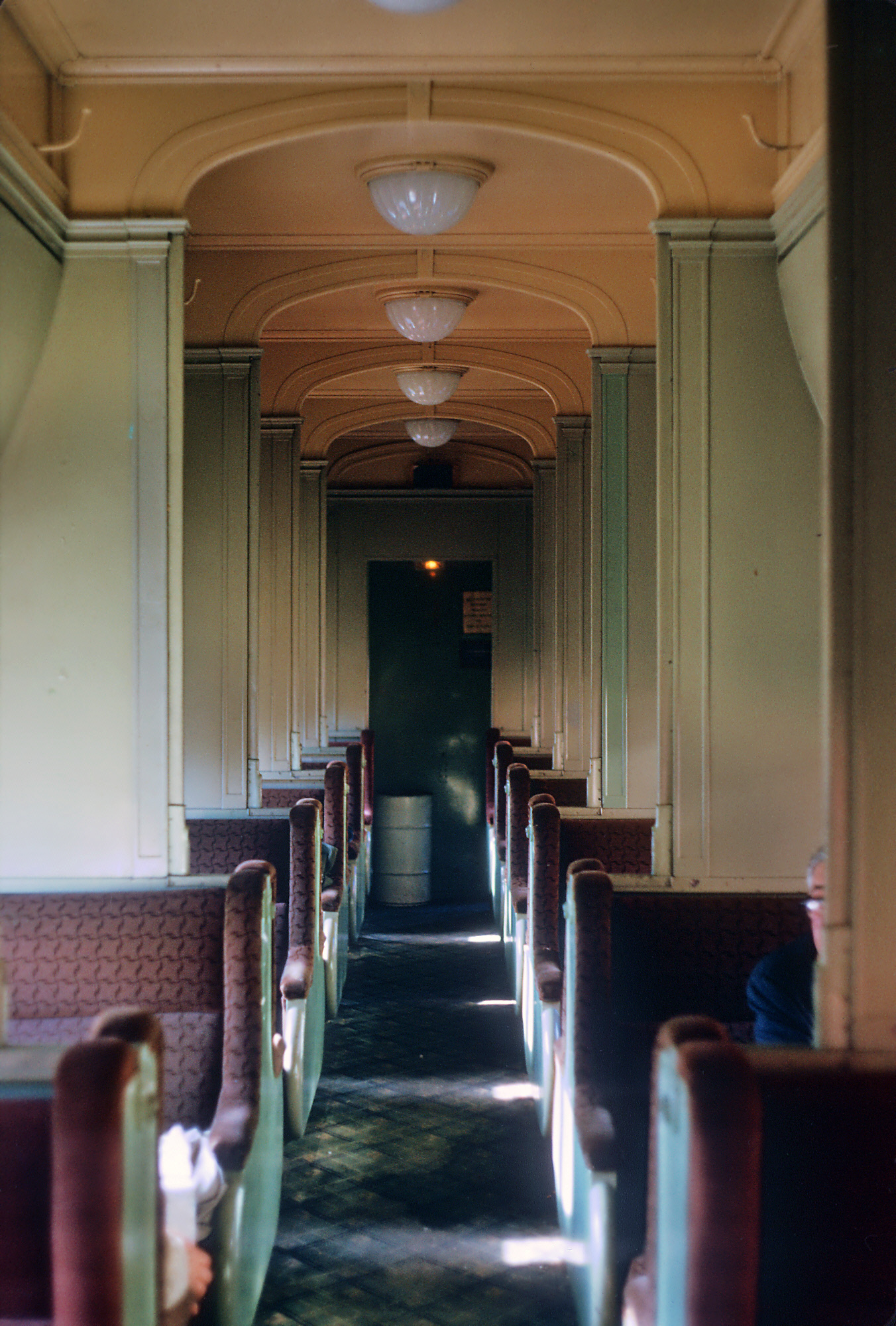 As the face of sleeper service on passenger trains Pullman, which operated all on board car services  and generally the company's equipment was painted a dark, forest green unless the owning railroad specified it match a particular livery or color (for instance, if the train had a themed livery).

However, with the coming of the streamliner era in the 1930s this all changed. While increased sleeping services began to take hold in the first part of the 20th century, new innovative designs and layouts during the streamliner era meant passengers had a wide range of options to choose from regarding their sleeping arrangements.

Instead of simply the option of a berth most sleepers on board famous trains like the 20th Century Limited, Super Chief, and Empire Builder carried the choice of a berth, roomette (somewhat like a berth but it also was a small enclosed room with more privacy), or a full bedroom (which featured, among other things, a full private bath).

Also, after World War II Pullman's on board services were taken over by the railroads themselves although the company continued to manufacture cars. 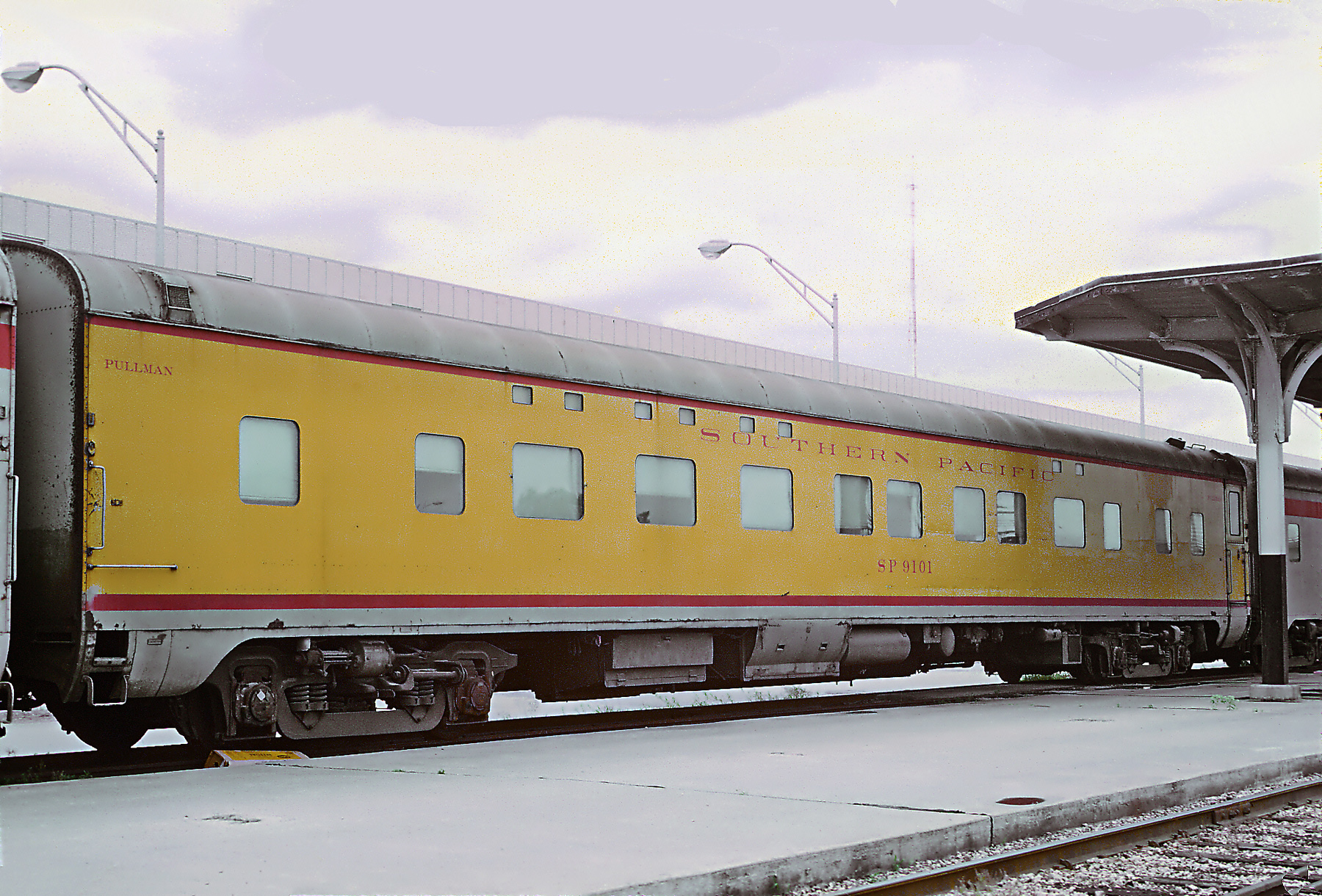 Southern Pacific 4-compartments/4-double bedroom/2-drawing room Pullman #9101 is seen here in Houston, Texas on June 5, 1969. The car wears Union Pacific colors as it was used as part of the "City" fleet. Roger Puta photo.

And, while Pullman was the leader of the passenger railroad equipment industry it did face strong competition from the Budd Company.

Budd not only helped build one of the most successful original streamliners, the Chicago, Burlington & Quincy Railroad's Zephyr 9900 the company also fully equipped a number of famous passenger trains like the Santa Fe's Super Chief.

Budd's success in the industry had as much to do with the exterior of its equipment as the interior where it invented and owned the patent on the stainless-steel, streamlined rail car design.

During the streamliner era several prestigious passenger trains would tout "all-Pullman" status, meaning the train was entirely made up of Pullman equipment, many of which featured sleeping arrangements. 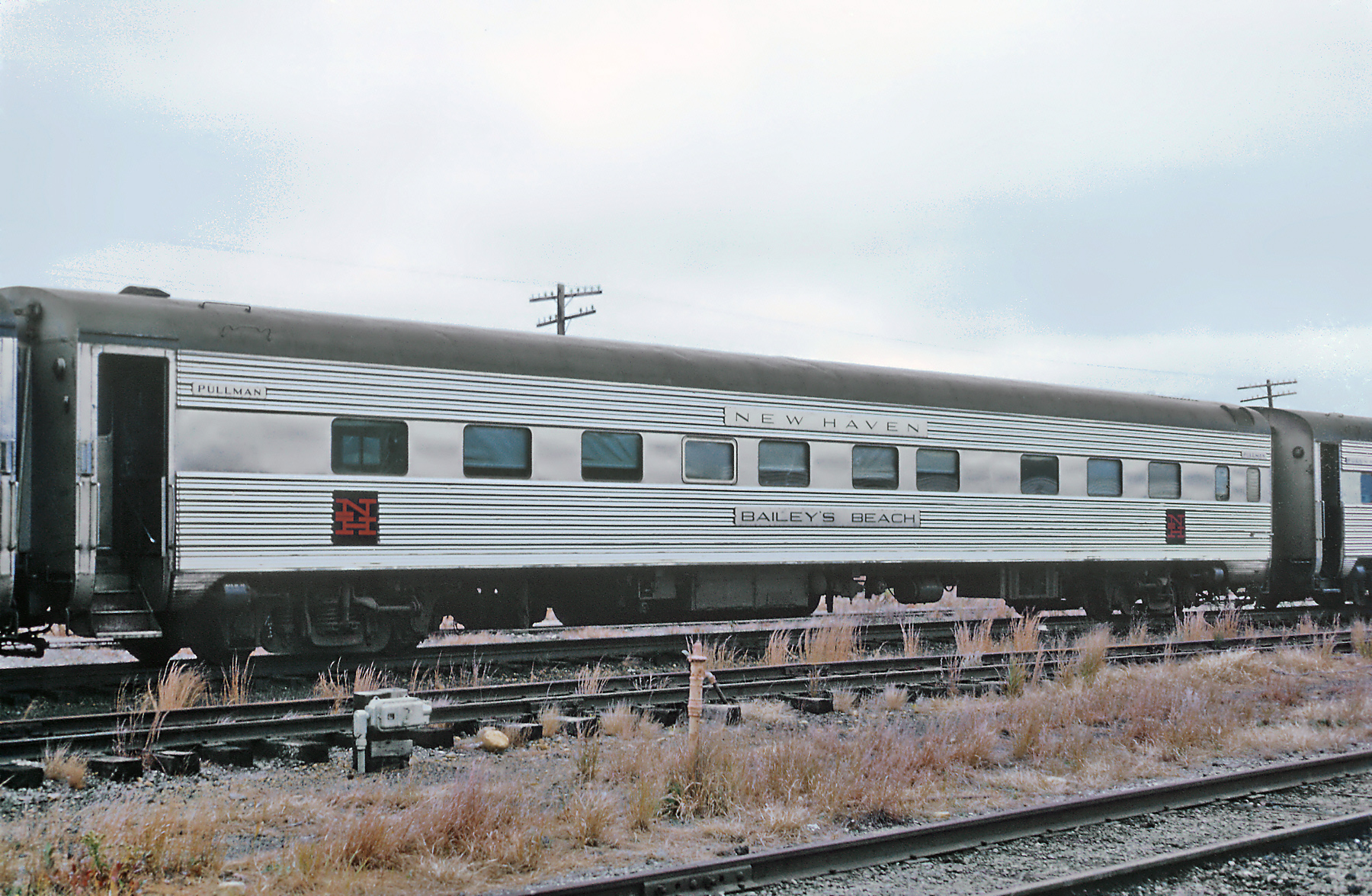 For instance, aboard a typical 14-car consist of the Union Pacific's City fleet, eight or more of the cars included either full sleeping arrangements or some combination of them (such as the rear sleeper-observation car which featured double bedrooms in the front section and lounge furnishings and the back).

Interestingly, though, Union Pacific and other railroads wouldn't always refer to their sleepers as such, instead calling them Bedroom cars.

These designations were used for years to describe the layout of sleepers and they can be confusing to decipher without the benefit of the name beside the numbers.

Today, Amtrak still offers sleeping services, even full bedrooms which can be purchased aboard their Superliner, bi-level cars.

However, gone are the days of purchasing berths in open sections as to allow for greater privacy Amtrak features only private rooms.

While Pullman exited the passenger train market around the same time railroads did their cars and equipment are still revered today, some of which have been restored by private collectors and are certified to operate on the rear of Amtrak trains (at a very steep cost I might add).