Today's St. Louis Union Station (also known by its initials, SLUS), once one of the busiest terminals in the world, no longer serves dozens of inbound and outbound passenger trains heading east and west.

However, it is one of our country's largest, constructed during a time when the nation was rapidly expanding westward.

Fortunately, the building has been beautifully restored and now serves more as an entertainment and shopping venue with museums (including an operating model railroad), plays, restaurants, and tours available (there is even a hotel on the grounds).

The station was completed in the mid-1890s and served in its original role until 1978 when Amtrak's final long-distance passenger train left the magnificent train shed (at one time the station welcomed over 100,000 daily passengers through its doors).

Today, the city's light-rail transit service, MetroLink, still serves the station from directly below the train shed within the subway tunnel.

The shed itself has been converted into an outdoor entertainment venue including an aquarium, mall, and outdoor eating area.  It has been a very impressive transformation. 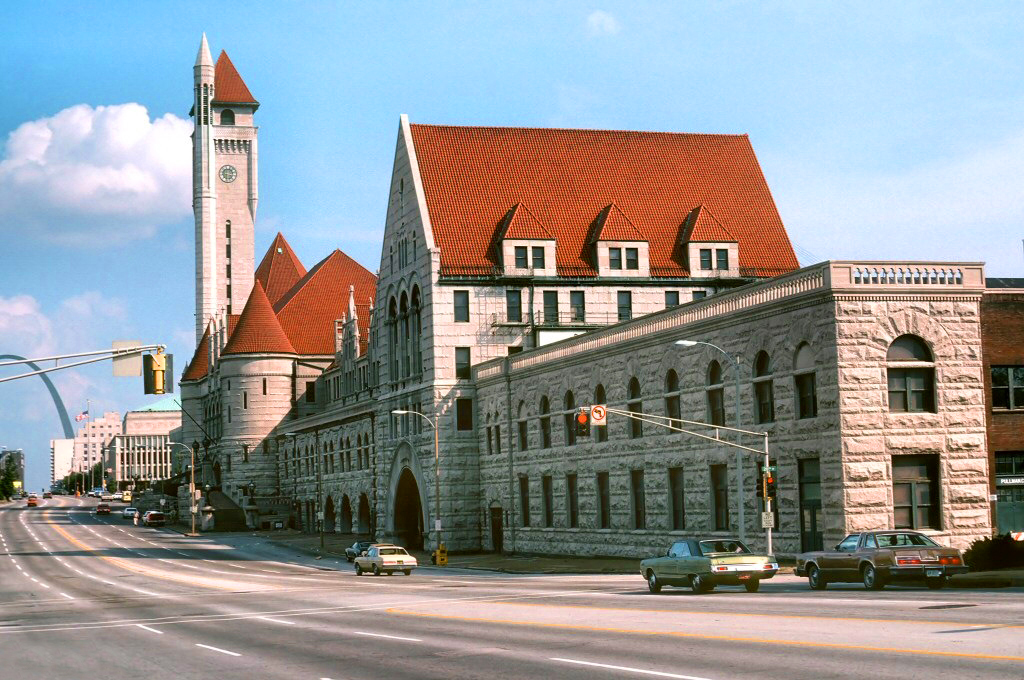 A view of St. Louis Union Station as it appeared in November, 1977 shortly before Amtrak left the terminal. Gary Morris photo.

By the last decade of the 19th century St. Louis found itself in an increasingly important role as "The Gateway To The West" since it lay at the conjunction of the mighty Missouri and Mississippi rivers.

The Transcontinental Railroad had been finished just over 20 years prior and new lines were still being built across the Frontier.

In addition, many eastern and western trunk lines, or their future subsidiaries, terminated at the city such as:

Following the Civil War, a growing St. Louis expanded to the point that it boasted the nation's fourth largest metropolitan region behind only New York City, Philadelphia, and Chicago. 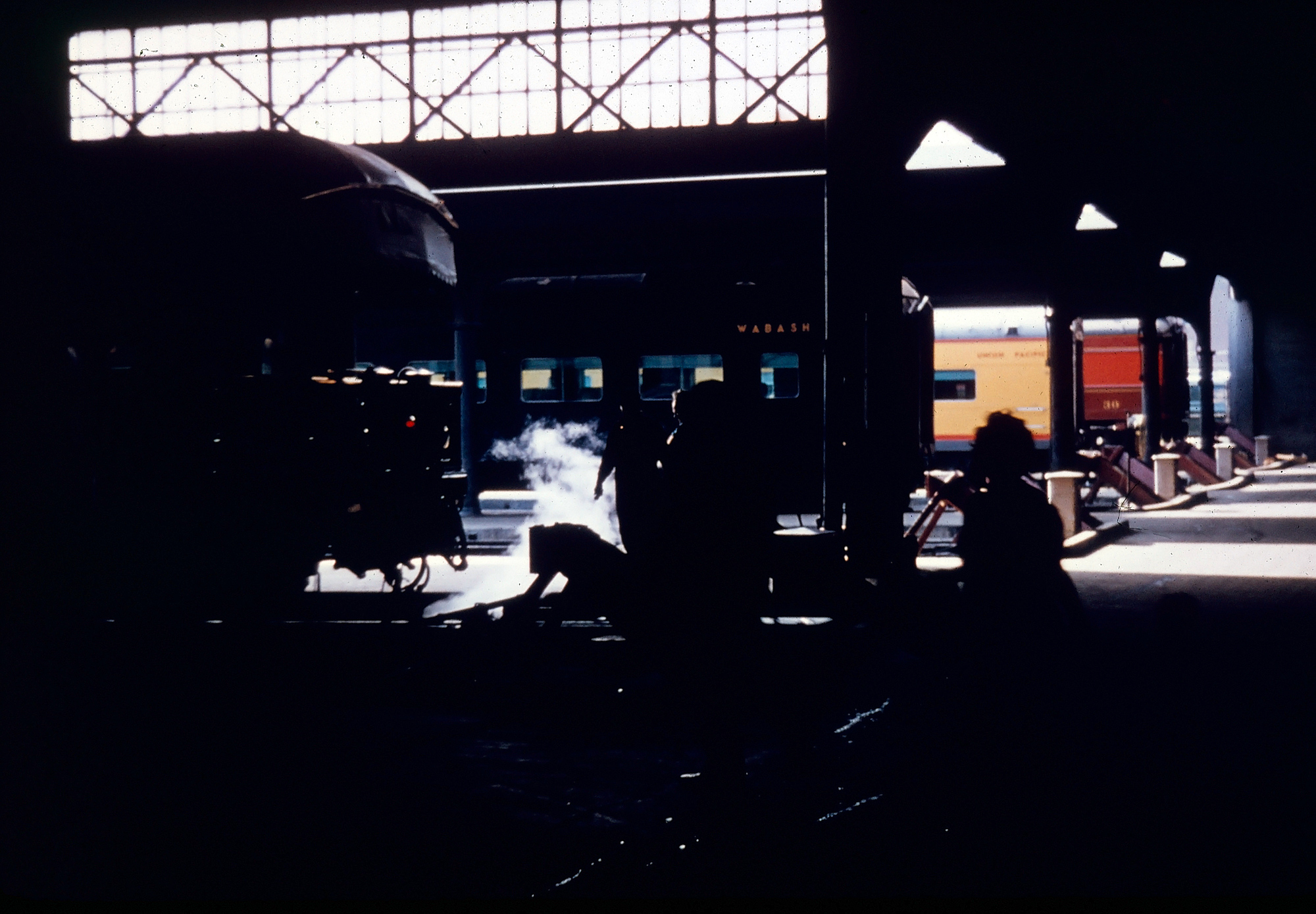 A dark photo but fascinating scene captured by A.C. Kalmbach of a busy St. Louis Union Station during the 1950s; Wabash, Union Pacific, and Gulf, Mobile & Ohio equipment can be seen on their respective tracks under the trainshed. American-Rails.com collection.

This growth was thanks largely to its gateway status with so many westbound settlers passing through the city.

Understanding its role, St. Louis wanted a magnificent station to showcase its growing importance while combining several terminals then in use throughout the city.

To do so it launched a worldwide design competition with architects from across Europe and the United States submitting proposals.  Ultimately, a local firm, Link & Cameron, was awarded the winner.

Headed by Thomas C. Link and Edward B. Cameron, according to Brian Solomon's, Railroad Stations, they suggested a design that played on the city's French heritage in the Norman Revival style (also known as the French Romanesque style).

As Hans and April Halberstadt note in their book, The American Train Depot & Roundhouse, the building evoked a grand chateau along the Loire River.

The terminal's cut-stone appearance, using nearby Missouri granite, was far different from others built in Midwestern cities such as Cincinnati, Kansas City, and Indianapolis between 1878 and 1890. 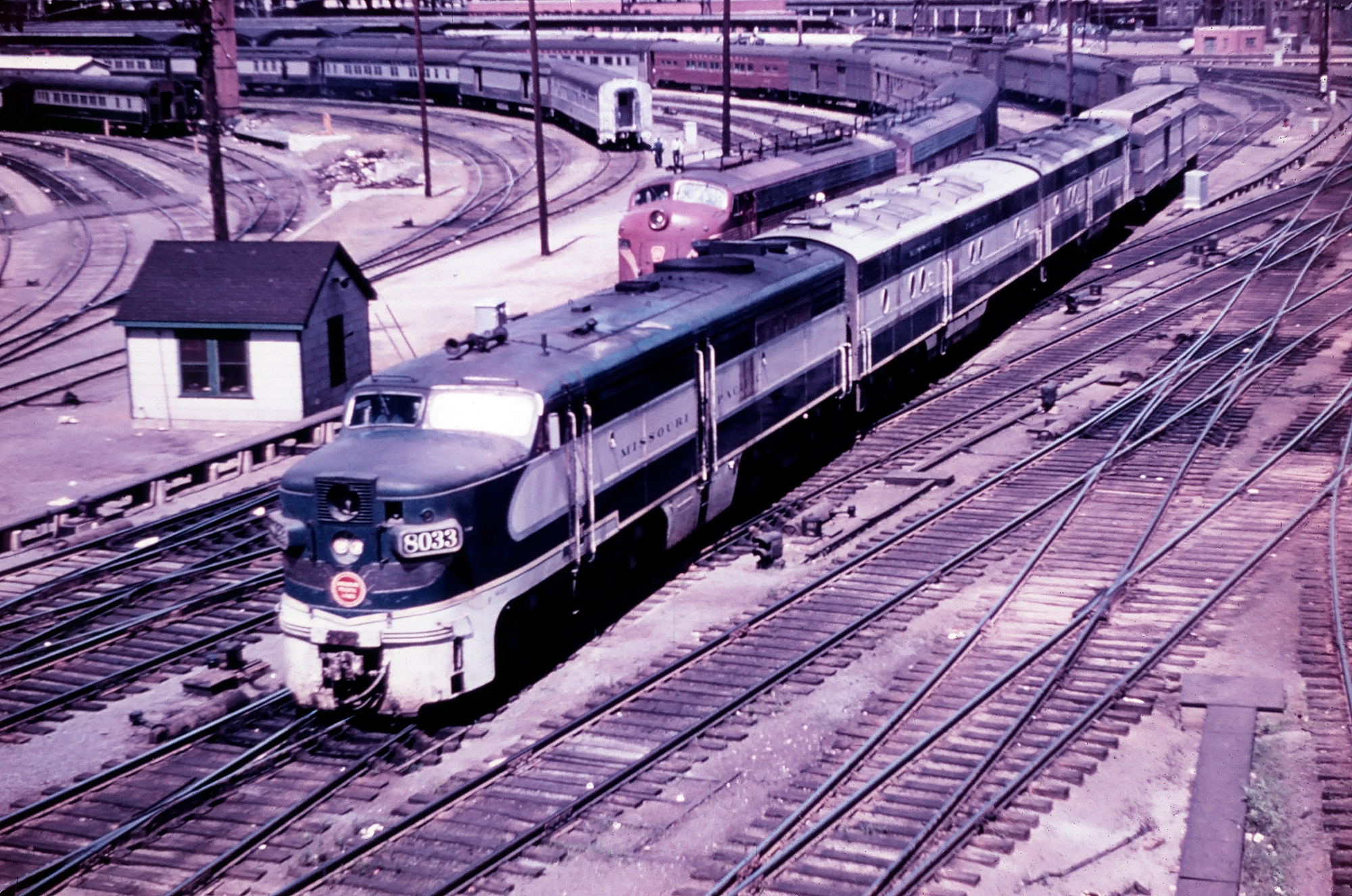 Its greatest exterior feature was a grand 280-foot clock tower as well as towering Romanesque arches.

On the interior the terminal featured a 65-foot vaulted ceiling in the Grand Hall with stained-glass windows (manufactured by St. Louis firm Davis & Chambers).

The inside was split into three main sections;

As construction and design plans came together the Terminal Railroad Association of St. Louis was formed in 1889, jointly owned by the the original tenants (MP, StLIM&S, Wabash, O&M, L&N, and the Big Four). 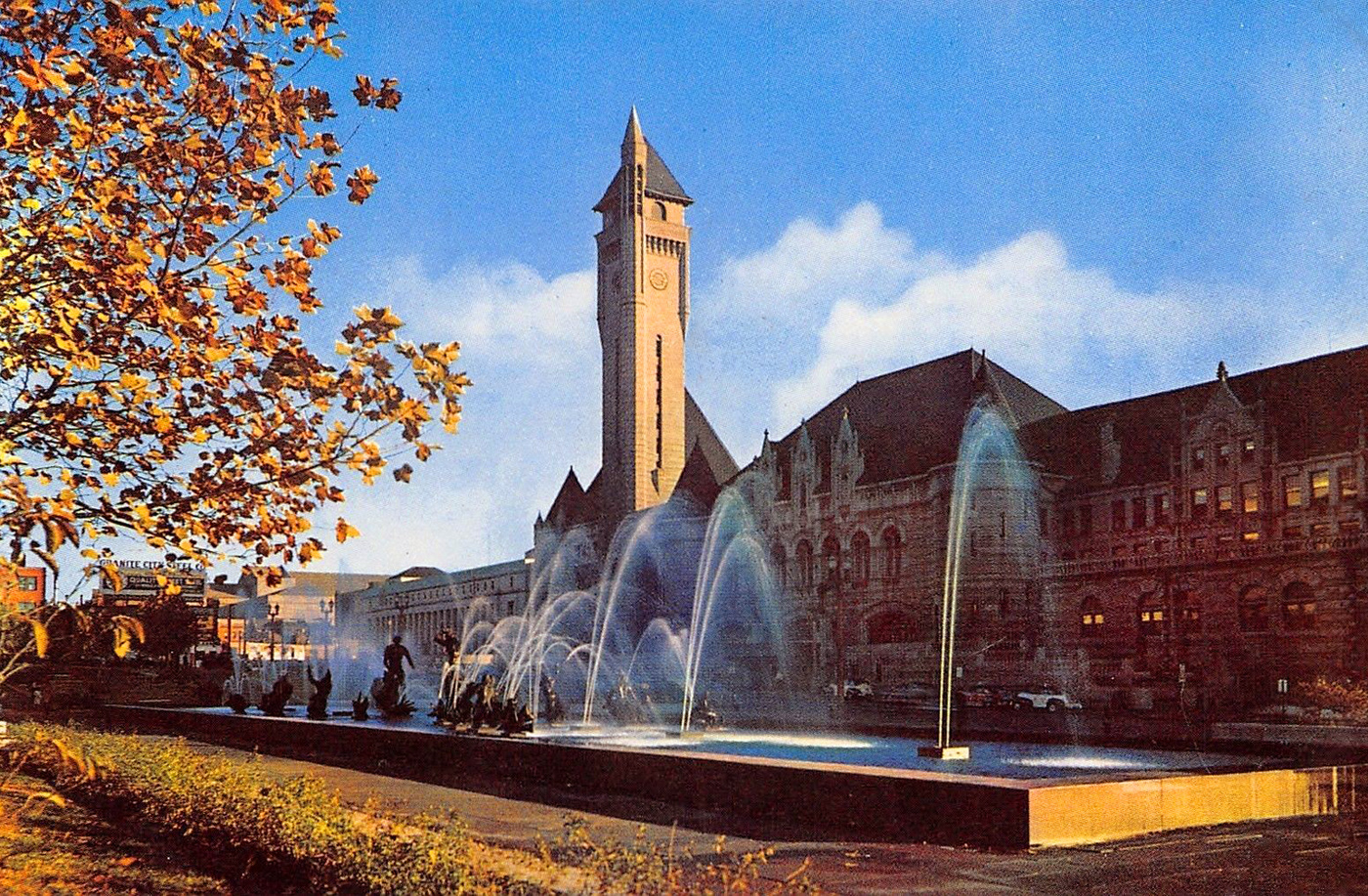 The Aloe Plaza (named for Mrs. Louis P. Aloe's late husband who spearheaded the project), completed in 1940 at $100,000. The bronze statues were by Swedish sculpture Carl Milles, depicting the meeting of the Mississippi and Missouri Rivers.

The station would ultimately combine 31 different rail lines and at its height served 22 different railroads (some of which later joined the association).

Several of the very best trains ever put into service passed over the TRRA's rails including:

St. Louis Union Station opened to the general public amid great fanfare on September 1, 1894 at a cost of $6.5 million.

It was one of the earliest malls in the country with stores lining the arcade behind the Grand Hall and sporting an open, light, and airy atmosphere.

After fewer than 10 years of service it was overhauled in 1903 to accommodate the many visitors for the upcoming 1904 World's Fair held in the city that year.

It saw one final update in the 1940s, mostly revolving around the interior and then slowly declined during the 1950s and 1960s as the traveling public abandoned trains for highways and airlines. 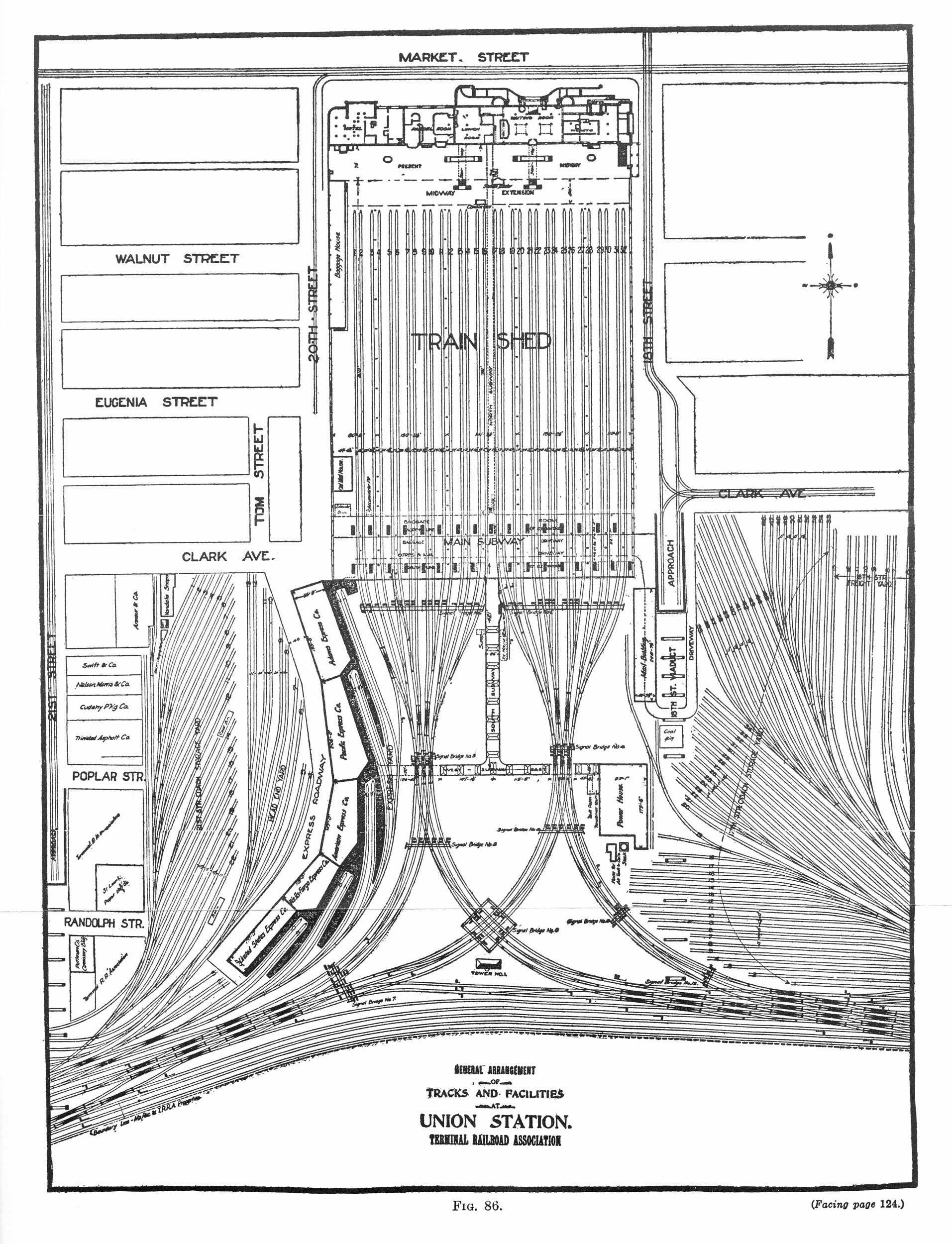 On May 1, 1971 Amtrak took over most intercity rail services across the country and Union Station was left with only three trains still calling at its trainshed.

Finally, on October 31, 1978 the last train departed, the Inter-American (Chicago - Laredo, Texas).  However, unlike many of its counterparts the building soon found a new life when it was purchased by Oppenheimer Properties for $5.5 million. 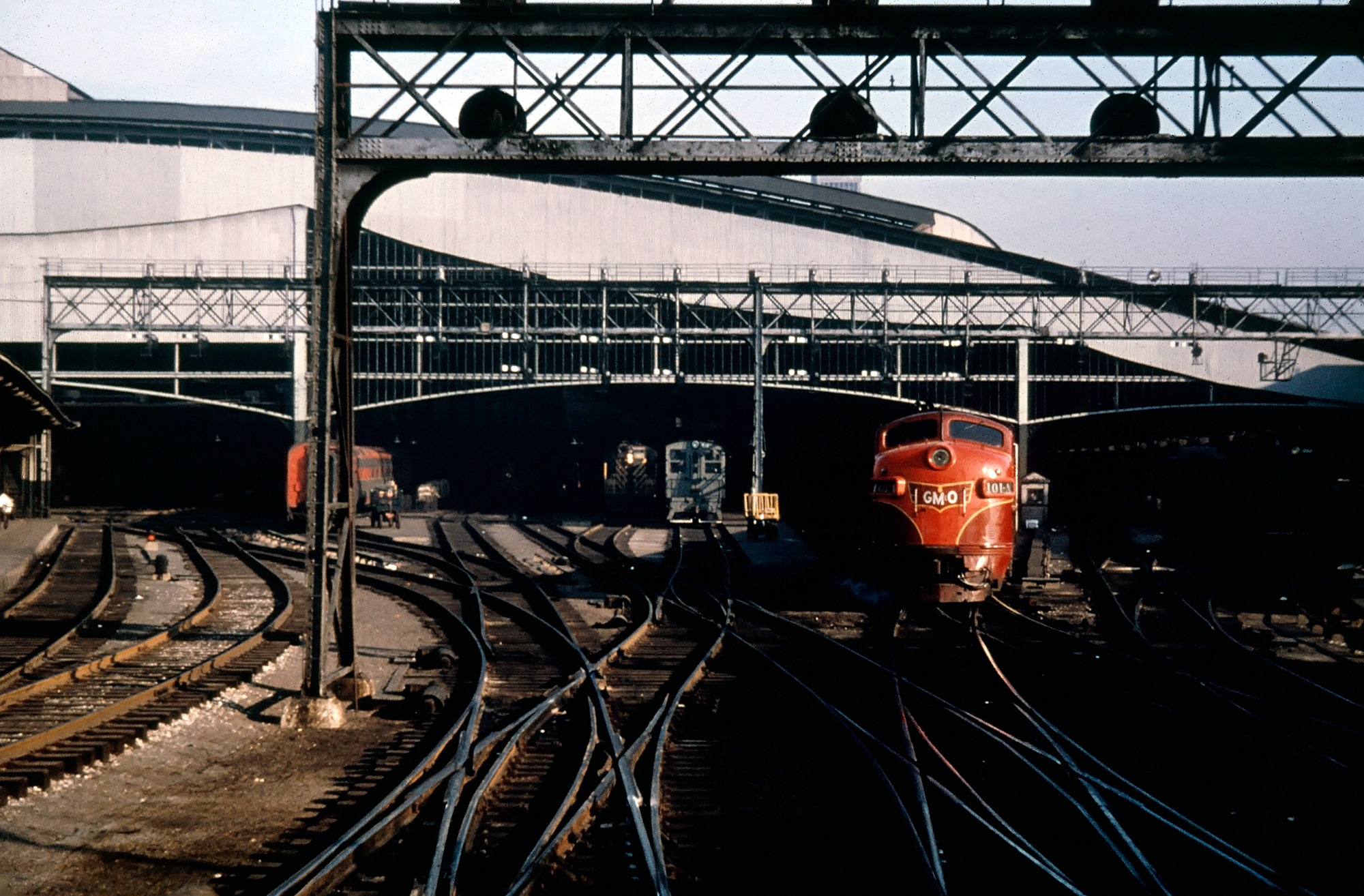 The new owners quickly set about a major overhaul of the structure, envisioning a popular entertainment venue albeit without long-distance rail service.

It reopened to the public during August of 1985 after a restoration of $150 million.

Today, Saint Louis Union Station is perhaps in better condition than it ever was under railroad ownership.  The interior's lavish decorations and restored rooms have transformed it into one of the city's preeminent destinations.

You can find more than two dozen places to dine inside as well as numerous shops and specialty stores. In 2011 the station finished a major restoration and upgrade by Marriott Hotel in the building's main terminal, moving several stores to the next door train shed.

This has allowed it to provide even more luxurious accommodations for travelers and visitors.  While it has been discussed recently to remove the four remaining tracks serving the station, today service is still available via Metro Link.